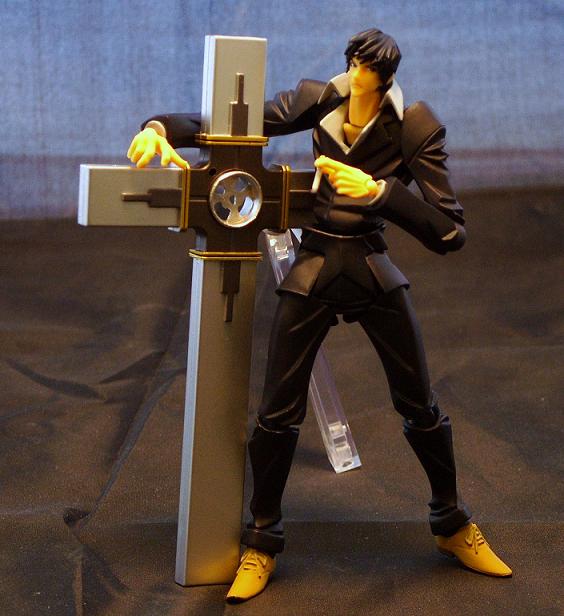 The character below hails from the Trigun anime series that was popularized here in the USA on Cartoon Networks Adult Swim late night programming.

Nicholas D. Wolfwood, also known as Nicolas the Punisher, is a member of the Eye of Michael, an organization of assassins founded by a plant worshiper. After showing potential in the orphanage in which he is raised, Chapel trains and modifies him, giving him enhanced abilities and the ability to regenerate from heavy injuries using special vials, though he ages much faster than normal. He is given a special large cross-shaped gun called the Punisher, which contains two machine guns and a rocket launcher. In the anime one of the Punisher's unused side is shown to hold a function, as the metal casing extends outward to reveal a small gun rack filled with handguns. Wolfwood later shoots Chapel and takes his place in the Gung-Ho-Guns in an attempt to kill Knives. He fails to do so, and is instead sent by Knives to protect Vash until he is able to meet him. After Vash is captured, Wolfwood rescues him, and battles his childhood friend, Livio, and his master, now in a wheelchair. He manages to kill Chapel and defeat Livio as well as Livio's alternative personality Razlo, but having overdosed on the regenerative vials, he soon dies while having a drink with Vash.

Today I will be reviewing the Revoltech version of the above character. As you may know, Revoltech is known for making some super articulated action figures from a variety of different anime shows.

The example we are reviewing was provided graciously by our friends over at Anime-Export. Please check them out, great service and good prices.

So, how does the Revoltech 092 Nicholas D Wolfwood stand up to the character its modeled after. Well, it doesn't stand, but that's only a minor flaw when you use the included display stand.

Before we get to the actual figure, I always like to mention the packaging. I do this so you readers can see what it would look like straight off the shelf. After all, the packaging has to grab your attention, doesn't it? As usual, this release from Revoltech is packaged in an attractive window box that lets you see Wolfwood clearly. 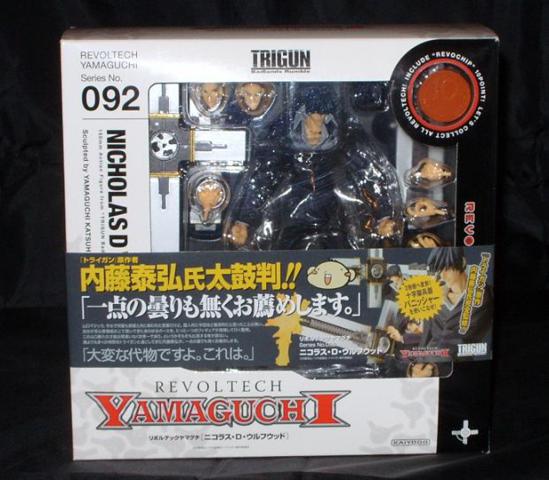 Wolfwood comes with a variety of weapons, hands, faces, etc... So many that they had to make the plastic trays 2 tier to fit everything into the box. 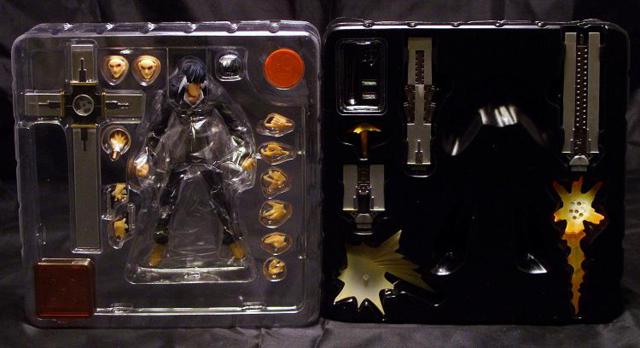 Onto the actual figure. The figure stands about 6" tall, made of sturdy PVC, and features a ton of articulation. His primary weapon, The cross shaped "Punisher" can be held on his back using a strap that attaches to the side of the gun. He also has 2 hand guns that are affixed to a set of removable hands. 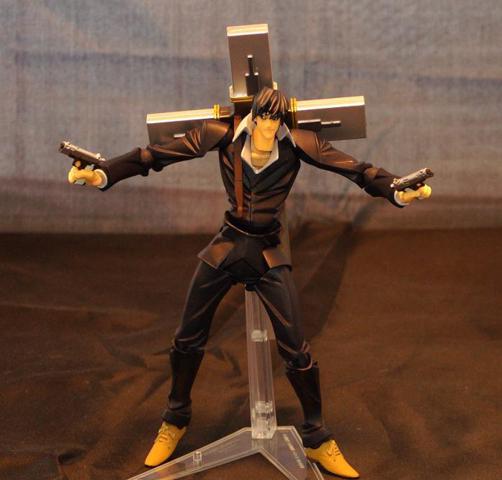 Here is a close up of one of Wolfwood's interchangeable faces. Note the great paint detail. Keep in mind that this piece is tiny! 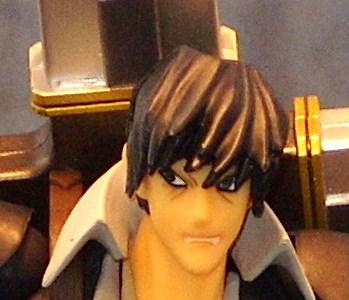 Below we see one of the possible poses that you can do with this figure. Check out the included dramatic foot stomp piece that comes with this set. 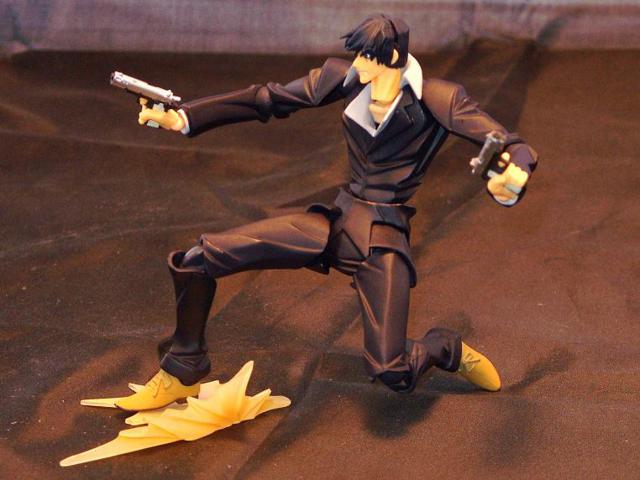 OK, now here we see some of the figures flaws....First up, look at how the face/hair has a gap right above the ear. No matter how hard I pressed on this gap, I couldn't get rid of it. The other flaw is that the neck joint just looks bizarre to me. 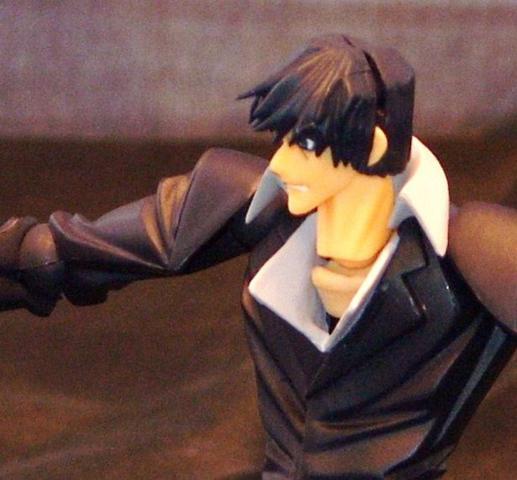 Here we see Nicholas holding one of his included accessories. No I am not talking about the Punisher gun, look at the other hand. He actually includes to cigarettes, can you believe it?! 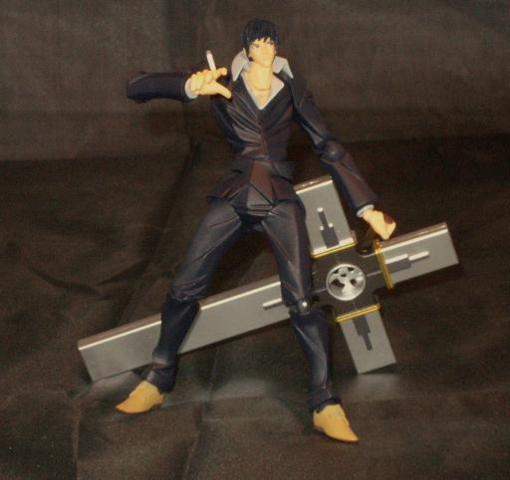 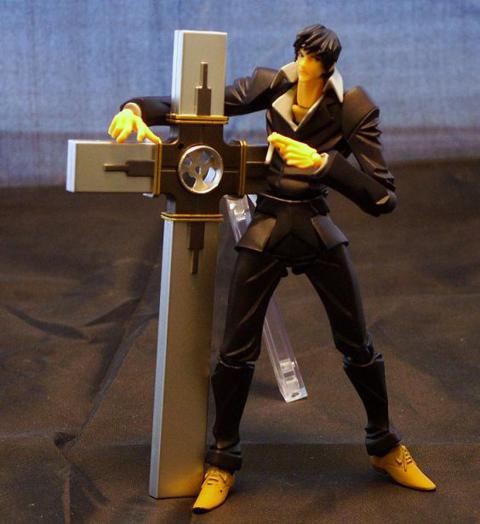 Here we see Nicholas looking rather dapper sporting is dark sunglasses. Who does he remind you of? 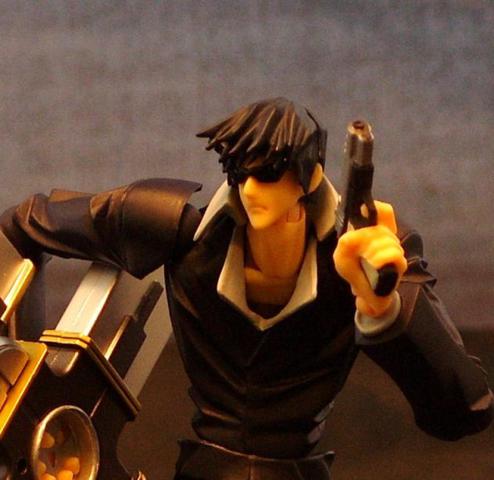 In these last two photos you can see the dramatic blast effect pieces that can be added to the Punisher gun to make a more realistic effect. 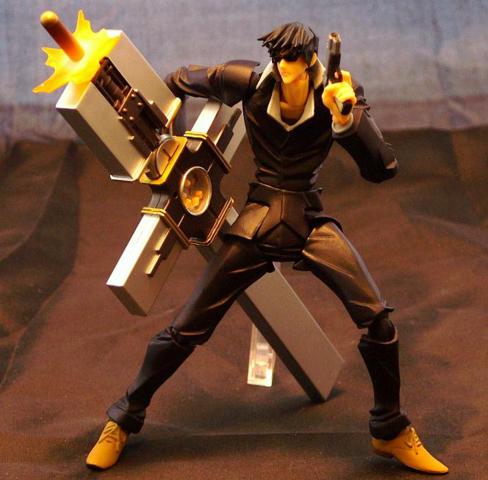 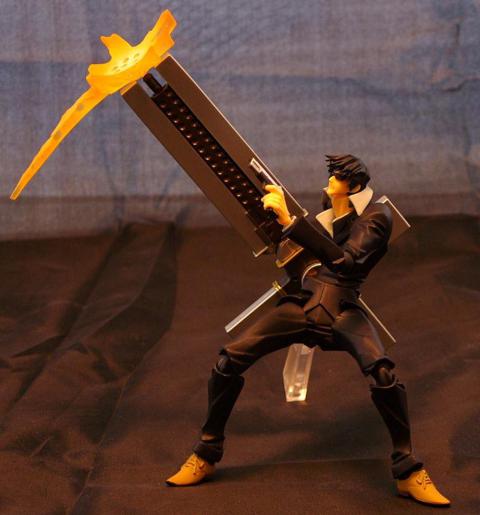 All things considered, its not a bad figure. I just feel the sculpt is a little bit off making Wolfwood look more like Mike D from the Beastie Boys. No hate, this is just my opinion. Hey, they could always re-use this scuplt and do a cool Mike D figure. I'm just sayin'