A couple of days ago I looked through the CollectionDX site and found that the Mystic Brothers were never reviewed. So I decided to dig it out of the toybox and go for another review. 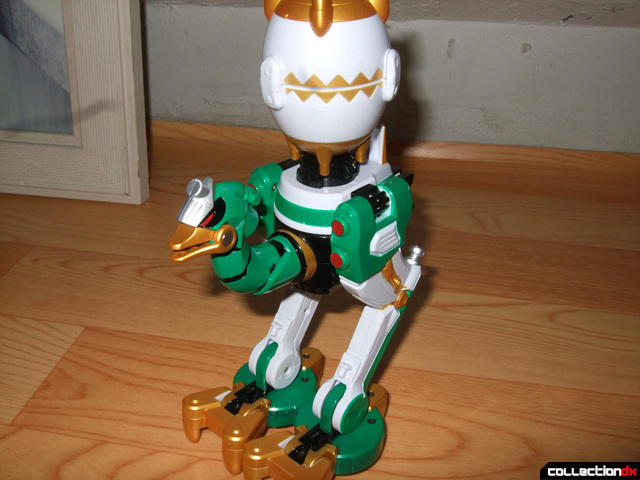 This… is an ostrich. A green ostrich… with angry red eyes… a giant, partially-golden egg on top… and the ability to turn into a helicopter.

The entire concept alone is just so ridiculous, and I love that so much about this guy as I invite all kinds of randomness with open arms.

Oh, and his mouth opens. 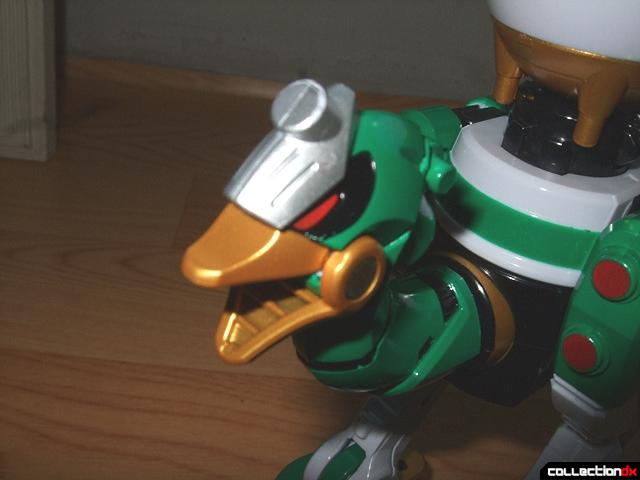 The Egg Headder is simple enough. 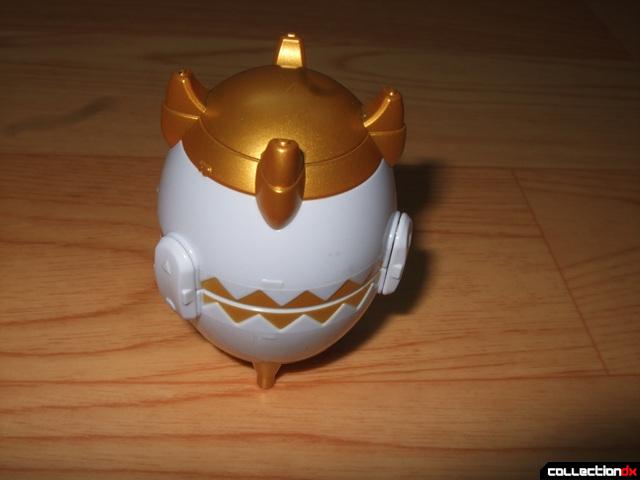 It splits in half to reveal Headder ports and some tabs, but that’s about it. Unlike every other Headder in the line, it doesn’t actually connect to the Mystic Runner (the ostrich), but rather it uses these four narrow pieces to grasp the Headder port. 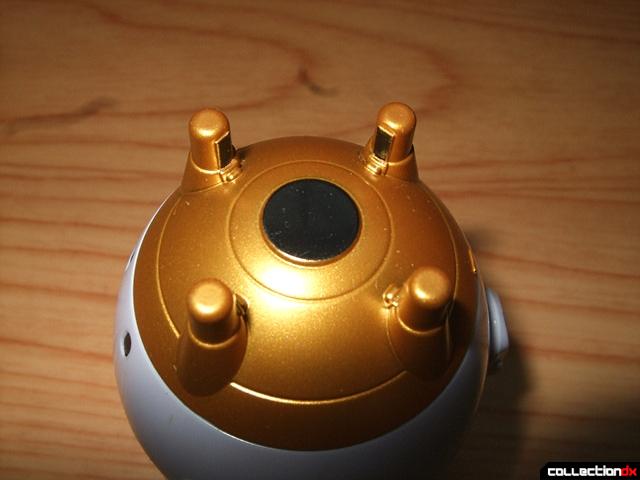 For the most part it’s kinda bland, and if it hadn’t been packaged with something as insanely hilarious as the Mystic Runner I would’ve been turned off by it. 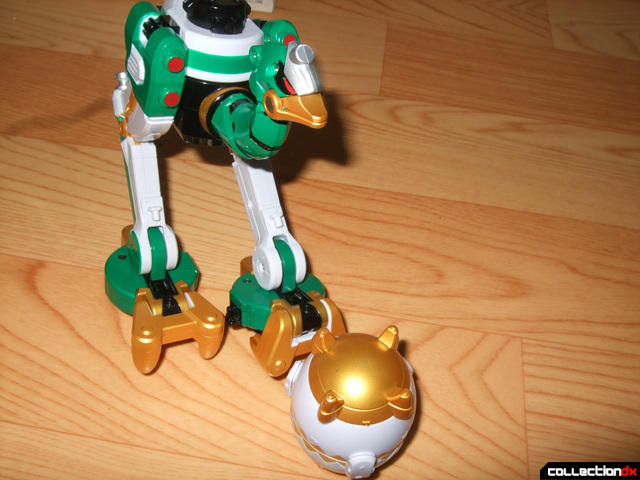 The set comes with one Gosei Card for the Mystic Brothers (Speaking of which, I can now understand Katakana, so I can read the card! Yay!) 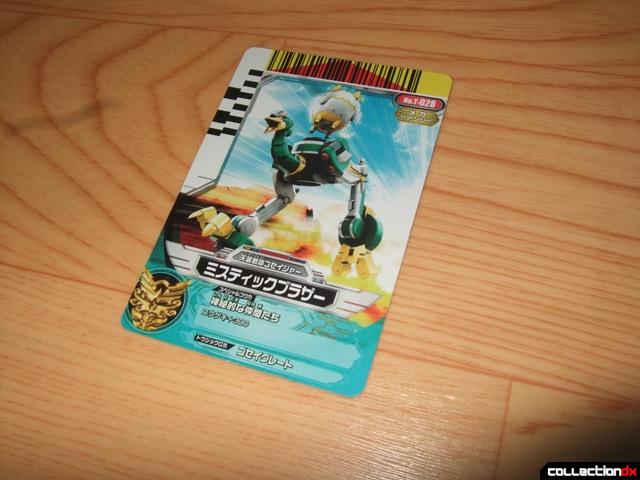 I love the back of the card because it has the five core ranger colors with the Goseiger symbol in the middle. 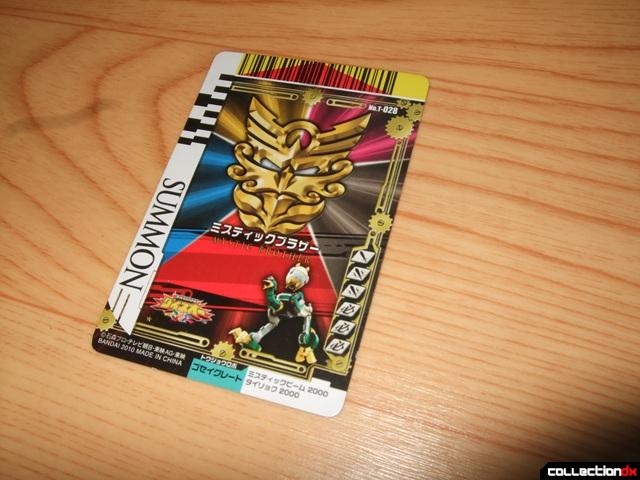 I don’t have Gosei Great (and I really want him!), so I can’t show you Mystic Gosei Great. However, I can still show you the superior combination since I have Datas Hyper! 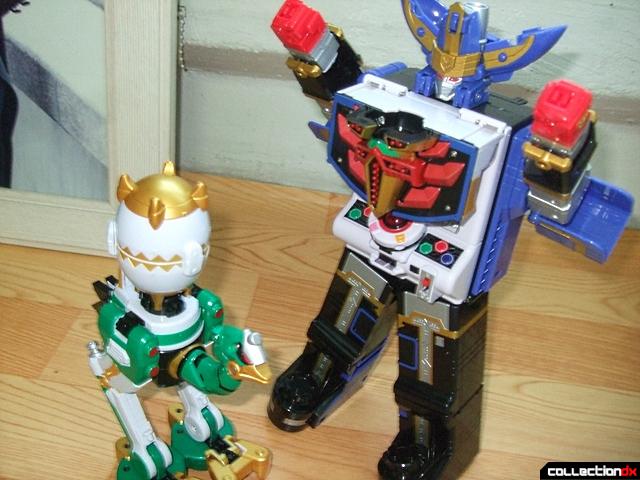 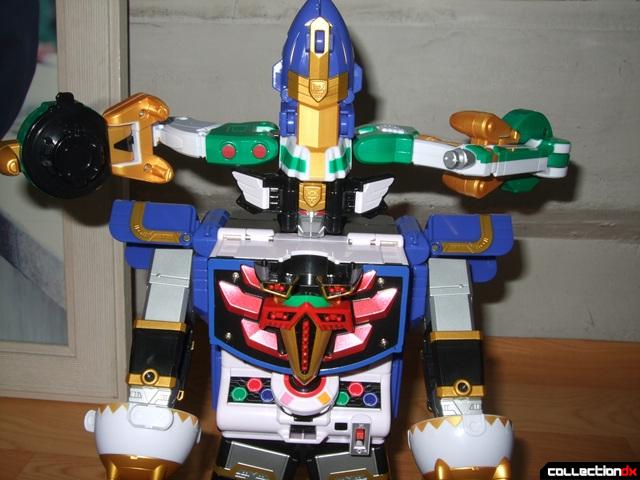 This… just- just LOOK AT IT! It’s a boxing robot with egg gloves that double as machine guns, plus a giant cone hat that doubles as a propeller! The sheer ridiculousness makes it one of my favorite Sentai mecha of all time. 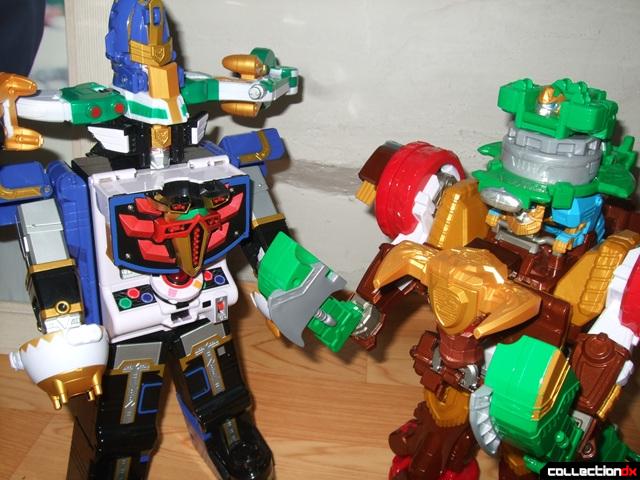 Datas gains a bit more height this way. He’s even taller than GokaiOh, one of the largest main Sentai robos. 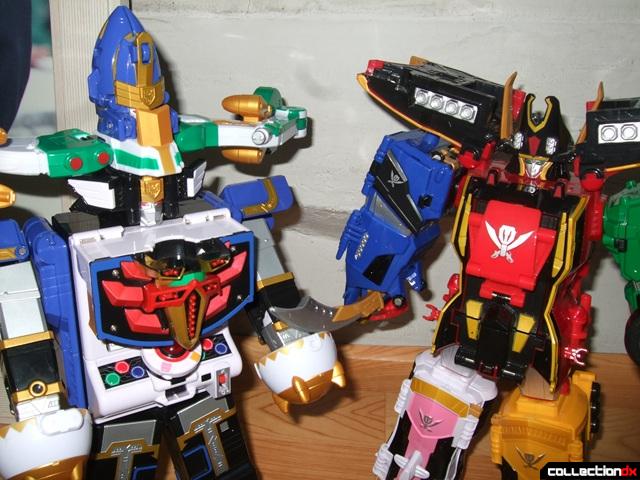 I don’t have any more Goseiger toys (shame!), but I’m pretty sure the Mystic Brothers can provide the sprinkle of insanity that any custom Goseiger combination needs. If you have Datas or any of the Goseiger toys and can find a good price for him, Mystic Brothers is a must-have! Obviously Mystic Datas cannot compete against the tough competition of “cool-looking robots” (especially prominent this year- look at the combiners we’ve been getting all across Asia! Ninninger, Biklonz, Giant Saver… it’s a combiner fan’s paradise!), so it decides to go a different route, pulling off an interesting and utterly absurd look that cannot be rivaled. 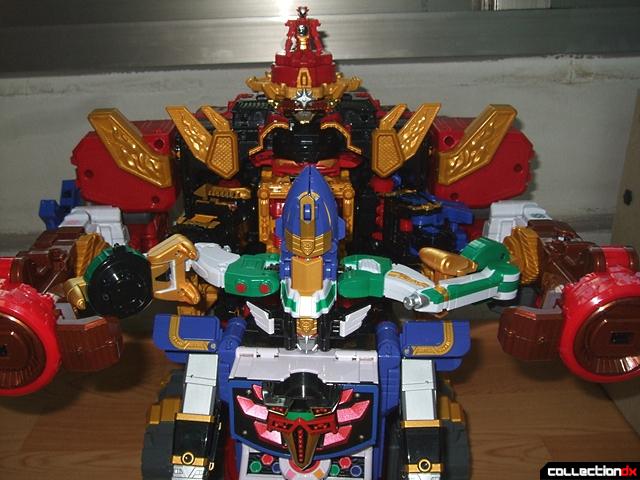 4 comments posted
Thanks for the fast upload!

I appreciate it :D

I thought I knew from insane Sentai mecha. I mean... Surfermaru, man.

I was wrong. Holy socks!

This is why we can't have nice things.

That being said, I almost got this one, though it wouldn't have had anything to combine with since I didn't like either Gosei Great (which I had- and reviewed- at one point) or Hyper Datas.

Oh hey, you're the guy that used to do Sentai reviews, right? Nice to meet you!

It's pretty understandable that a giant flying ostrich could be a tad absurd for some people. I've looked through a few auxiliary mecha and there's nothing that tops this in its ridiculous concept. I mean, MAYBE Kyoryu Origami, but that thing's more huge than it is insane.