Info from Wikipedia, Here OVA Mazinkaiser is a fictional robot from the anime and manga series of the same name, based on Go Nagai's Mazinger Z and featured in the 2001-2003 OVA series, Mazinkaiser and animated movie, Mazinkaiser: Deathmatch! Ankoku Daishogun. Within the story, Mazinkaiser was created by Professor Juz? Kabuto and piloted by his grandson Kouji. Mazinkaiser was created for the Super Robot Wars series and subsequently became a part of Mazinger canon. SRW Mazinkaiser was first designed by Banpresto for Super Robot Wars F Final, released for the Sega Saturn and PlayStation, with the blessing of Mazinger's creator, Go Nagai. The concept behind the machine was to give Kouji Kabuto, the pilot of Mazinger Z, an upgraded machine for later stages of the game. Banpresto contacted Go Nagai and pitched the idea to him, and he agreed to come up with the new unit. The new Mazinger was such a success that Go Nagai decided to create an animated series specifically for Mazinkaiser.

Today I will be reviewing Max Factory's Mazinkaiser (SRW version, special thanks to Vincent Z. from ToyBox DX for helping me out with identifying this version.) from the Max Gohkin toy line of high-end modern chogokin. Today's sample was graciously provided by our friends over at Big Bad Toy Store. Please click on the highlighted link to buy this item or just check them out for some great deals on the latest Japanese toys. Starting off, the packaging is phenomenal! The box is nice thick, corrugated cardboard with some great pictures of Mazinkaiser in some cool dynamic poses on both the front and back. Upon opening the box is when I truly became impressed. First thing I noticed was a pair of fresh white gloves! The gloves completely overshadowed the instructions included inside the same bag. Gloves for handling a toy? This truly must be a rather high-end chogokin to say the least! After I gawked at the gloves for a few moments, I noticed that Mazinkaiser was comfortably nestled in glorious Styrofoam! Styrofoam and Gokin just go together like peanut butter and jelly! As many of our readers know, Styrofoam used in packaging nowadays usually equals the item inside is high quality. 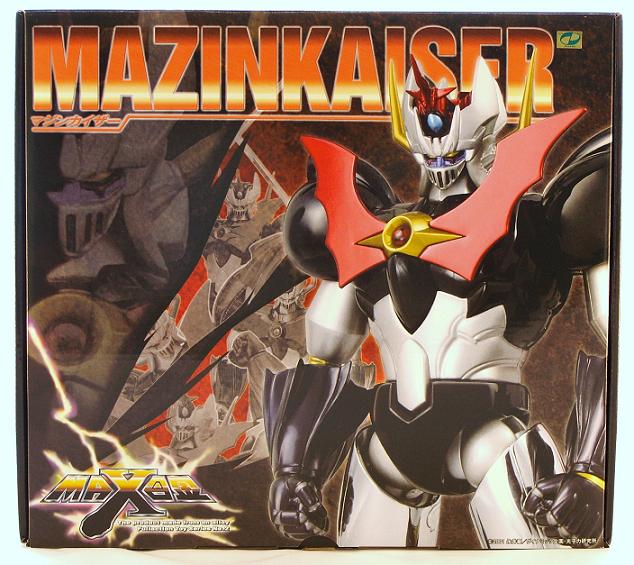 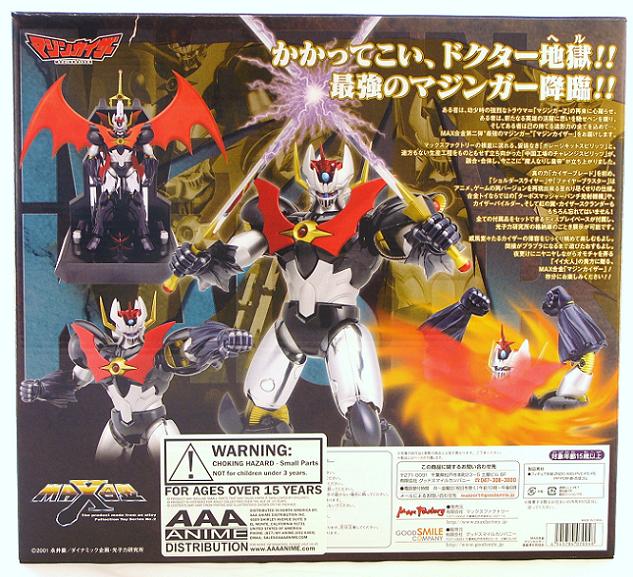 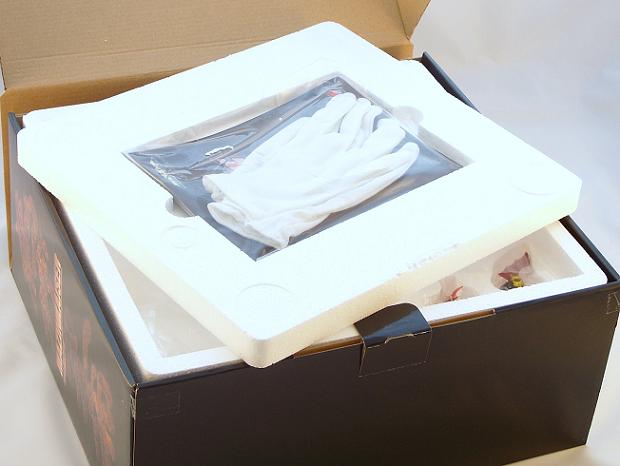 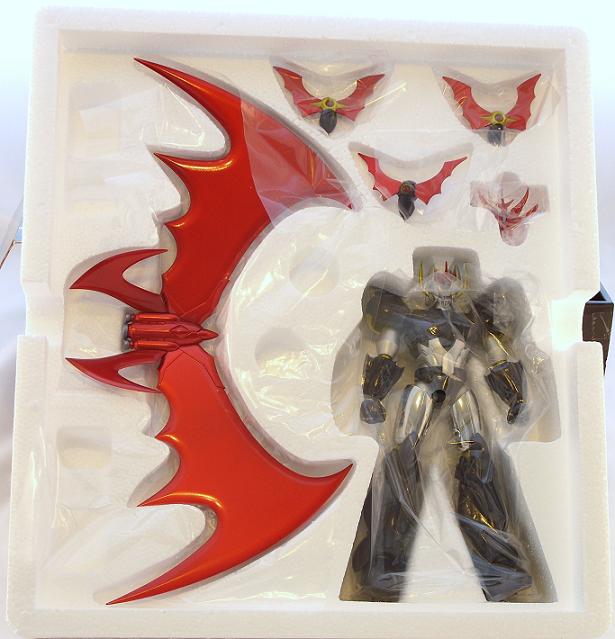 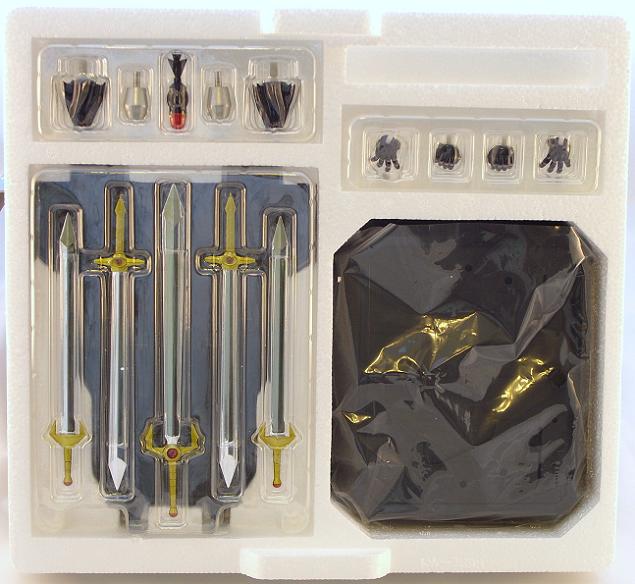 So, cool pictures but, what's included exactly? Glad you asked! Max Factory has included a whole slew of accessories. The amount and arrangement is very similar to Bandai's Soul Of Chogokin toyline. Mazinkaiser includes the following:

Mazinkaiser two-piece display base allows you to showcase all the items included above. Check it out! 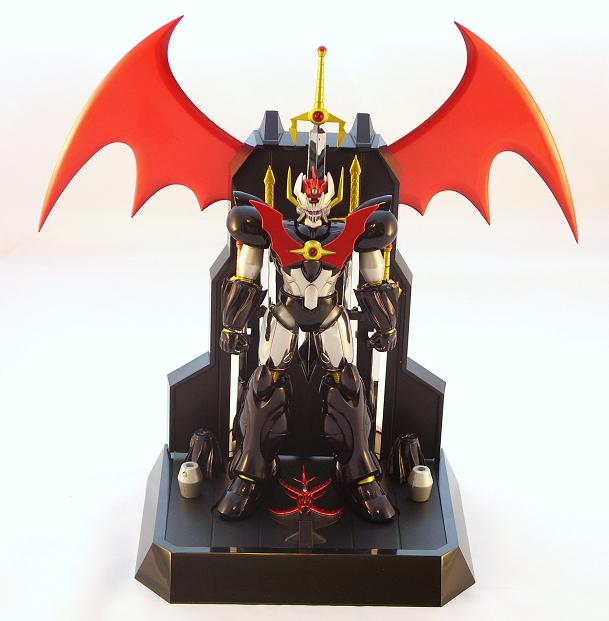 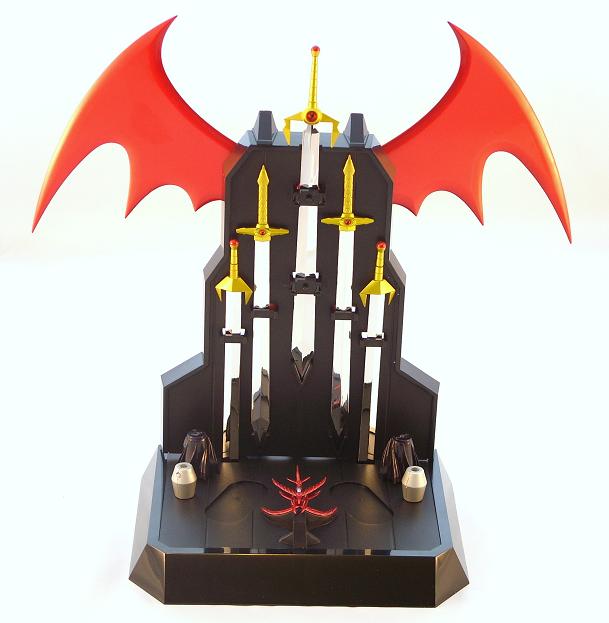 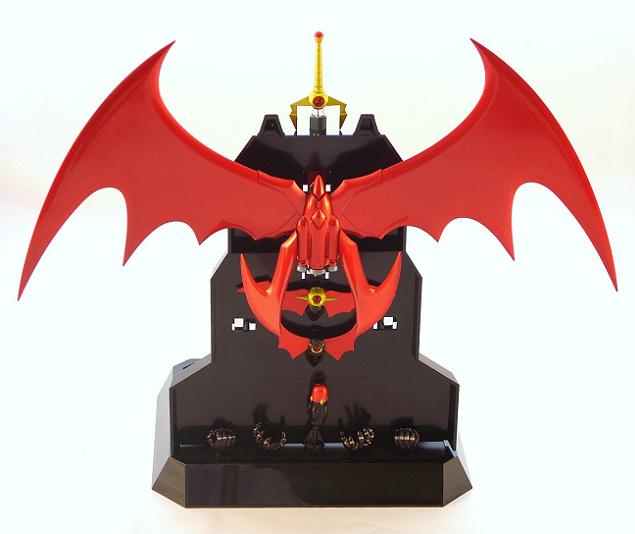 Now let's discuss the figure, shall we? Mazinkaiser is made from 1.4 lbs. of die-cast metal and high-quality plastics. The metal can be found in the legs, torso, and shoulders. The metal in the thighs especially stands out because of nice chrome plating. The balance of the figure is a mixture of PVC and plastics. Mazinkaiser is finished high gloss paint with very few flaws to be seen. Mazinkaiser stands just shy of 8" at the top of his horns and nearly 10" to the top of his wings when the Scrander is attached. You would think with this size and weight, Mazinkaiser would suffer from instability when posed, or have very limited pose-ability. Well, you'd be wrong on both counts. As shown in the next 2 photos below, Mazinkaiser can be posed very dynamically, even with his heavy Scrander attached. 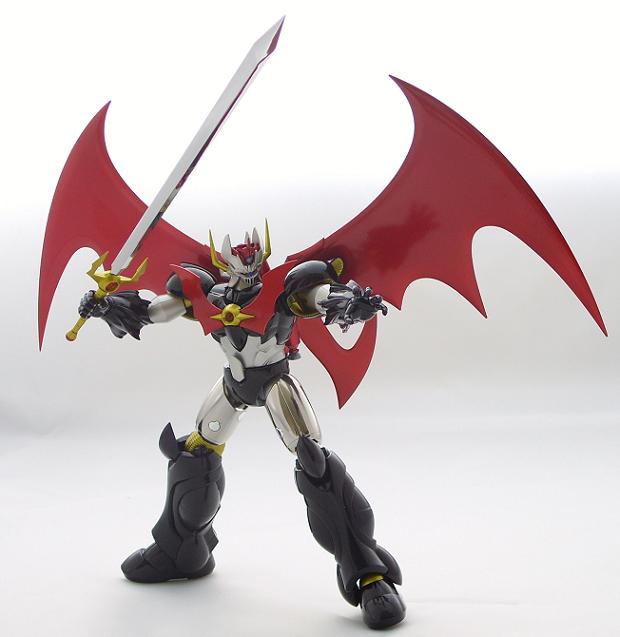 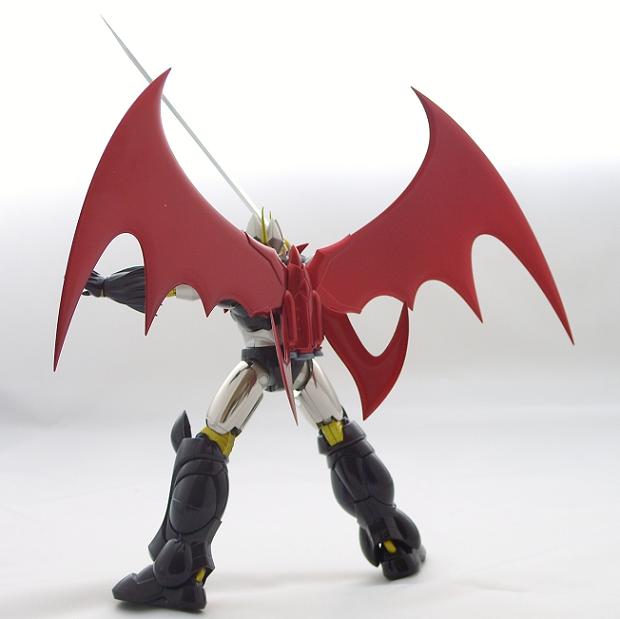 Mazinkaiser's most formidable and noticeable weapon is his giant Kaiser Blade. You can see below that the blade is huge and looks best when wielded with a two-handed grip. Note the chest piece is missing the gold outline of the Kaiser Blade, that's because he is holding it! Very cool, and accurate. 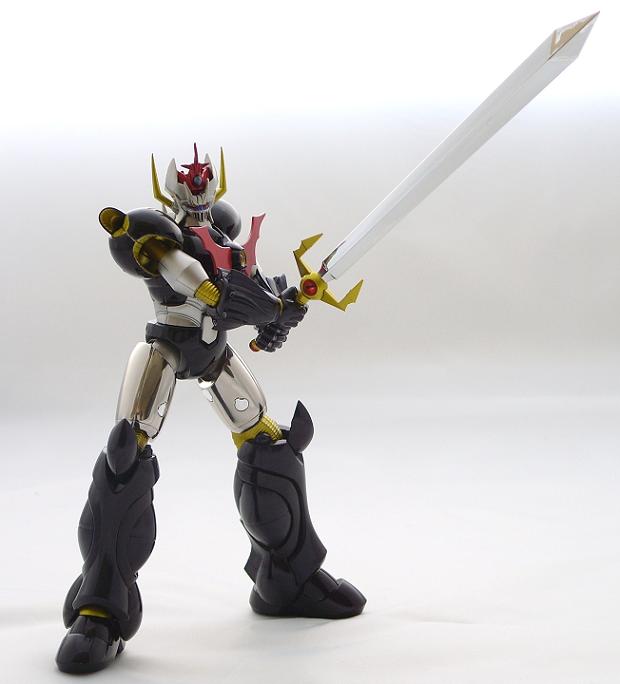 You could think that one sword would be enough. Well, not for Mazinkaiser! He actually included 2 more pairs. One pair is not shown, but the other, Kaiser Blade's / Shoulder Slicer's are shown below. As you can see, the handle of the 2 blades are stored in the opening compartment. one on each shoulder. Awesome, huh? 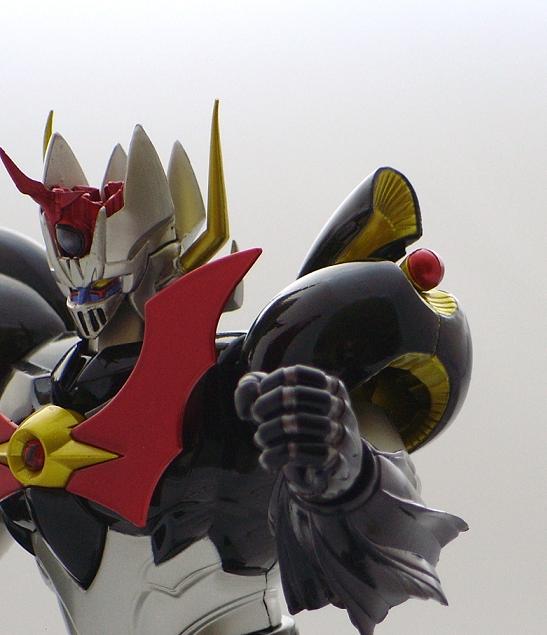 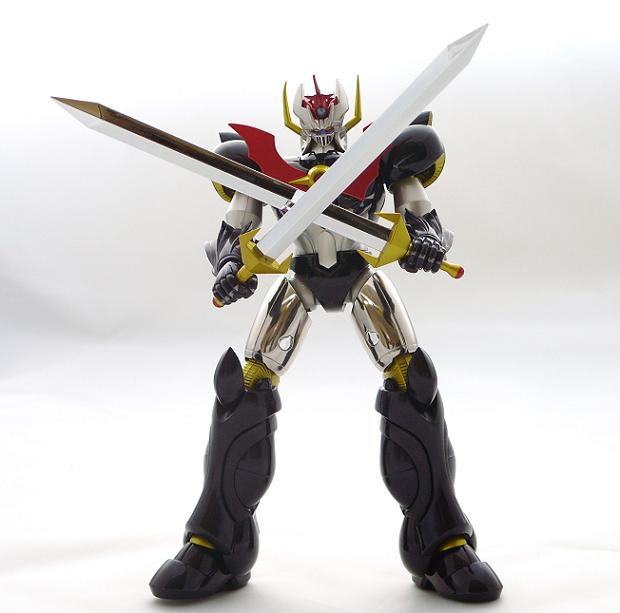 Next, I wanted to give you a headshot. Let's talk about the Jet Pileder. Yup, it's removable. Once removed, it's not much to look at, so I didn't bother taking a picture of it removed. Fortunately, Max factory was nice enough to include a nicely detailed completed Jet Pileder for display. The Pileder is small, less than an inch, but it is still very detailed for its size. 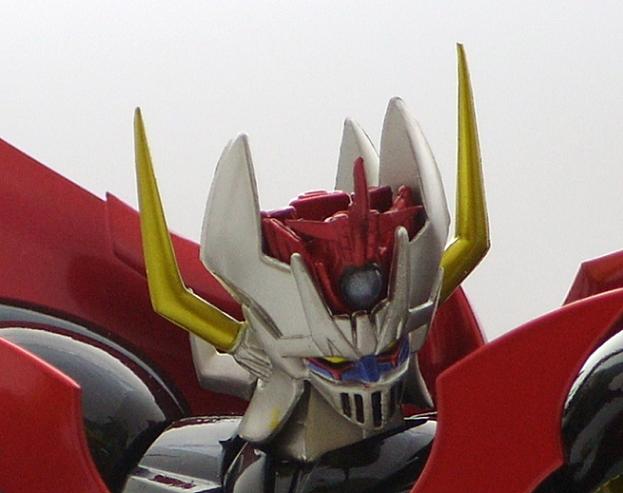 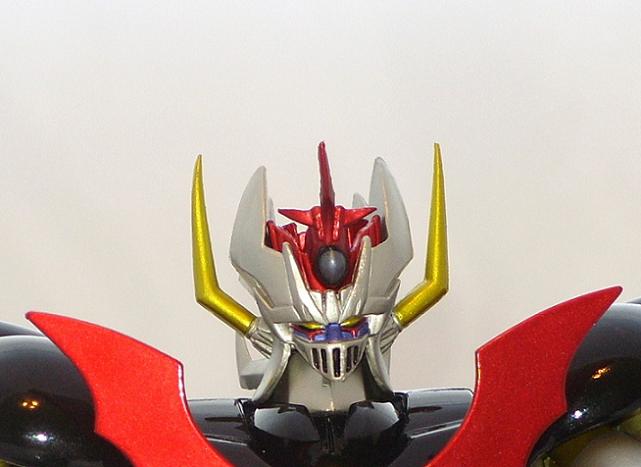 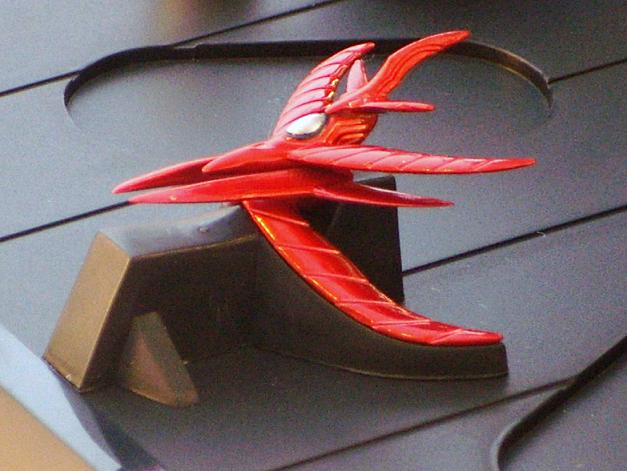 Once the Jet Pileder is removed you can pose Mazinkaiser in his Demon Mode. In this mode, Mazinkaiser operates on its own free will. No Kouji Kabuto required here folks! 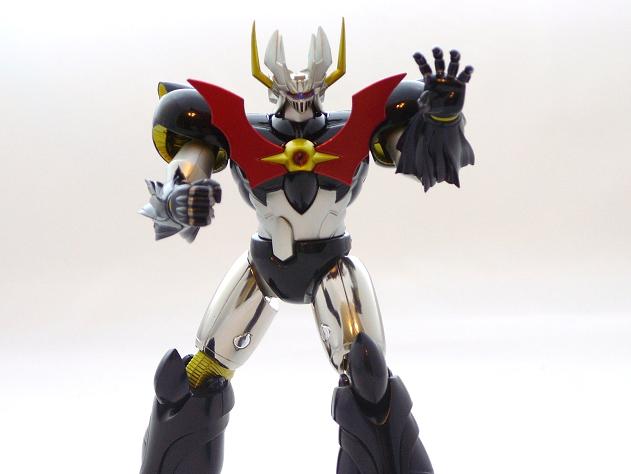 Now here is a curiosity here folks, Mazinkaiser includes a Giganto missile/Naval missile, and the naval piece is removable as its clearly shown in the photo below. But guess what folks? There is no way for the missile to attach?? Why bother? Maybe I am missing something. 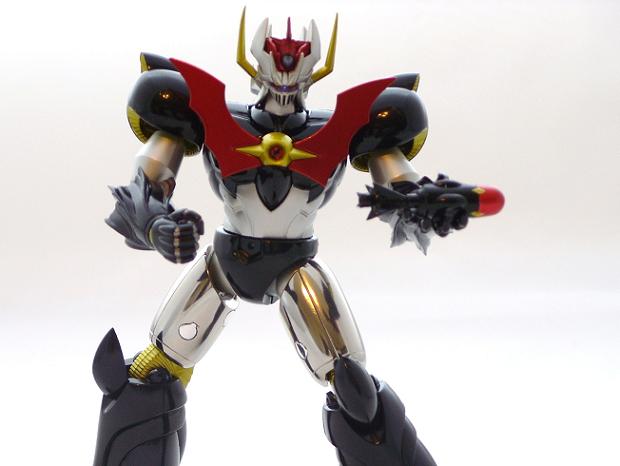 Mazinkaiser also can fire both fists, just like the Aoshima version (shown second photo below) Note the differences in the sculpt of the Max Factory SRW version and the Aoshima OVA version. Especially check out the head sculpt and the chest differences. 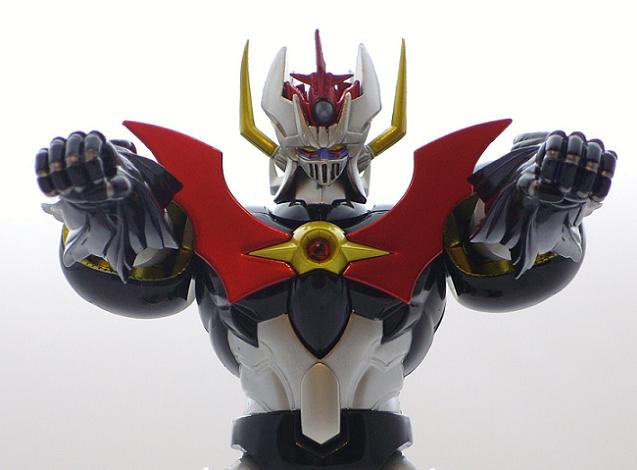 I have a confession, I like the Aoshima OVA version better 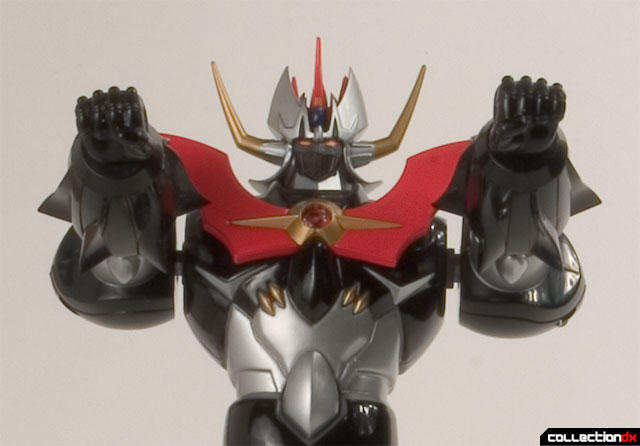 Note the detail of the little rocket thrusters on the backside of Mazinkaiser's launching forearm. 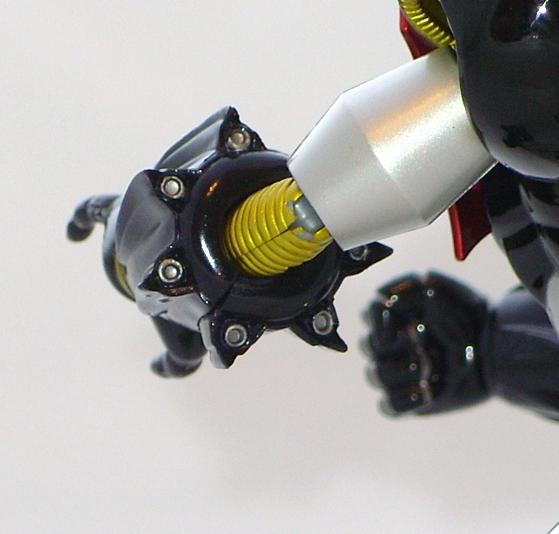 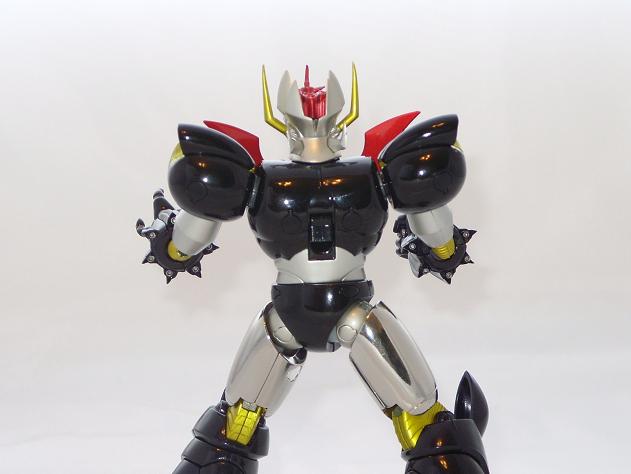 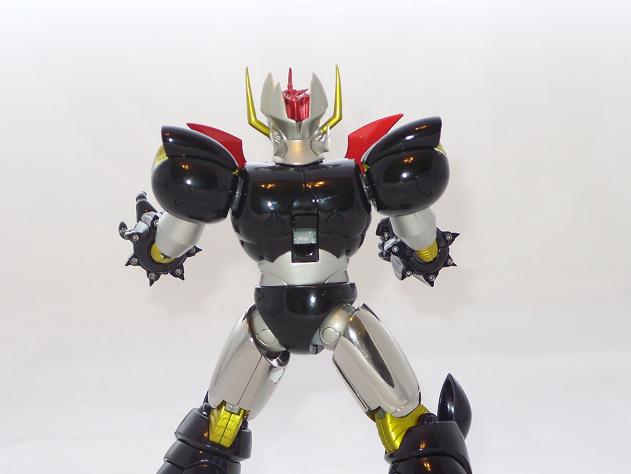 I couldn't resist this, a group shot of all the Mazinger variations I currently own together. Shown below is, of course, the Max Factory Mazinkaiser, the GX-02R Great Mazinger, and the GX-49 Mazinger Z. 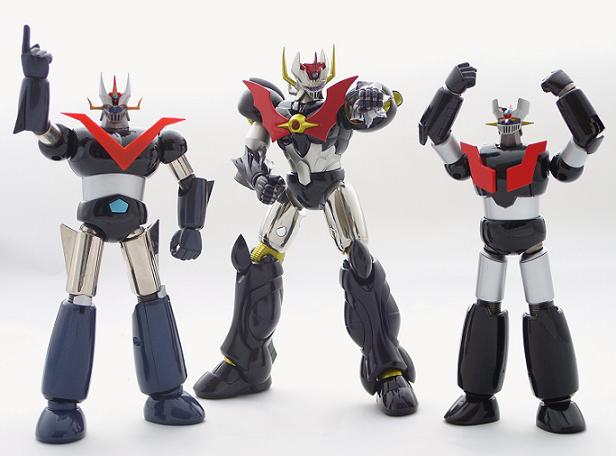 In conclusion, The Max Factory version of Mazinkaiser is pretty cool for the money. In case you missed it the first time around, it can be had for a song compared to the $400 plus that the first version is fetching on eBay these days. You can grab it right now at Big Bad Toy Store for a very good price.

The Max Factory Mazinkaiser fires the fists?! I don't remember mine being able to do so. But then again, I have the first version that Max factory put out years ago. How is the firing mechanism? Can you post some pics of it? Thanks!

Yup, it fires the fists, comes with extra arms with firing mechanism. Not too powerful, but it does it. I'll try to post a pic tomorrow. You can see the parts I am talking about on the display base.

Oh man! That's cool!!! Now I'm going to have to dig out mine from the huge pile of boxed mechas inside my closet to see if it came with the same firing mechanism. That should teach me to pay more attention to the accessories...

So Max Gokin releases tend to be once a year with Dragonar being the latest?

It does seem that way if you exclude the re-release of Mazinkaiser. Yes the latest is Dragonar. Josh will have a review up for that shortly.

I got mine and issue I had was the horns, the plastic bag to hold the robot made them round in, and you can straighten them out, but they still look flimsy compared to the aoshima versions horns. Was your like that? I notice the tips looked a little crooked? Just irritated me, seemed like poor materials and packaging on that part. the face looked a little scrunched on yours and mine...i wonder if the original release the horns were plastic not rubbery? I saw this item on e bay for 400 dollars and was so excited to get the reissue version and price...but alas...wanting was better than getting...similar to the ALL PLASTIC Dragonar.
Thanks for the review, probably wish I had had it before i bought it, I like the asohima version better...

do you have same issue with horns being flimsy rounded at tips? looks a little still round in pics, mine when I opened look like ( )

No not really, they both seem pretty straight to me.

Wow, I always thought Mazinkaiser origins came from that old graphic novel made by Go Nagai in the late 1980s...Didn't realise it was such a new addition to the mazinger universe. Learn something new everyday ;)

i LOVE the OP to the Mazinkaser OVA.

Pretty neat, but I'm not sure if the price is for me. If it was about half of what it's going for, I would pick up. Good review though. :)b

I might pass on this one namely because even though it has parts to make it look like the OVA (two of the chest crests and a pair of kaiser blades) this design is based on Super Robot Wars F Final. The Kaiser Scrander the head and the Pilder along with a bunch of minor detail are all based on F Finals design I might be nit-picking but I perfer the OVA look. And I thought the fixed in place version of the chest crest was supposed to have the kaiser blade part removable? the one without the gold peice is the F final chest.

I am just a wee bit curious, please do not take any offense. I have to ask, did you read the review entirely? I only ask because alot of the points you are making and the question you are asking can be found in the review, in one place or another.

Anyway I was just complaining about the design since it seems to me that its kinda pointless to include OVA parts on the game version and yeah I scrolled down too fast and missed the first few lines so I missed the whole "this is the SRW version" sorry.

I've got both the Aoshima and MF Mazinkaisers and love them both but for different reasons. I love the Aoshima one for it's sheer size and weight and the "simpler" design seems more in keeping as a natural evolution of the Mazingers than the MF one which is a huge design leap from Great Mazinger than Great Mazinger is to Mazinger Z. On the other hand the MF one seems a better size fit for the SOC's versions of Great Mazinger and Mazinger and I love the design details, also judged by itself it's a beautiful figure.

Great review, and comparison Dan. I've always been interested in MaxFactory's stuff, and your pics really, really bring out how lustorous, and glossy /chrome-y this thing is. The little details are top notch.

So far, the Aoshima 1st version was the first to fall into my lap through a friends trade pile, and I like it, but I'm certainly still thinking about getting this Max gokin. Thanks.

Fantastic toy , I wish max factory included an ova version Head , since overall the figure is not that different, and since they did include the chest piece in both version , the head would have been a perfect addition to the set

Compared to the Aoshima Mazinkaiser, the Max Factory version looks like a female version of Mazinkaiser. Sort of like the SOC GX-09 Mineva X looks in relation to the SOC GX-01R. It's weird...

I've been eyeing this piece of Gokin for a while. Seeing all versions of M' together looks really
impressive and a great study of design evolution. I'm thinking this review pushed me into the "buy" frame of mind.
Thanks for the great review! keep'em coming.

very cool review.. i prefer the Aoshima version better, but nevertheless they're almost the same in terms of details paint apps and all that... already bought one though, hehe... great review as always..

I have a question about the little silver cover on the waist. Has anyone found it falls off a bit too easily? Once mine came off once, it seemed to not want to stay on at all afterward. Anybody else notice this? I mean, honestly, it could be glued in place, since there is no missile to plug in there.