Starscream was memorably dispatched by Galvatron in Transformers:The Movie (1986). Megatron’s second hand man would soon return to the G1 continuity in the cartoon’s third season, albeit in ghost form.

Ghost Starscream first possessed other bots before obtaining a new physical form, which was promptly jettisoned into space. Starscream’s ghost would later appear again in the Beast Wars continuity.

The Ghost Starscream has proven itself to be a sturdy toy gimmick for TakaraTomy. And why shouldn’t it? I don’t even need an excuse to partake of a translucent recast, and the Ghost variation happens to have a perfectly good excuse. The latest Starscream mold to get the afterlife treatment is the Masterpiece.

Masterpiece Ghost Starscream presses all of my nerd buttons. Transformers? Yup. Masterpiece? Uh-huh. Clear? It’s a ghost, ain’t it? Shoji Goddamned Kawamori? Oh hell Yes! I sat out the original Japanese release (too pricy), though its subtle color scheme was very appealing. I bought the American G1 “weathered” repaint (and immediately removed the weathering with rubbing alcohol), but was left unimpressed. It was all very fine and good, but this Starscream was ultimately closer to the fiddly, awful Masterpiece Megatron than to the epic Masterpiece Optimus Prime.

My faint appreciation of the American version is helpless before the Kryptonite of gobs of clear plastic. Does the recast make up for the original’s shortcomings? Not really, but it certainly looks very good. 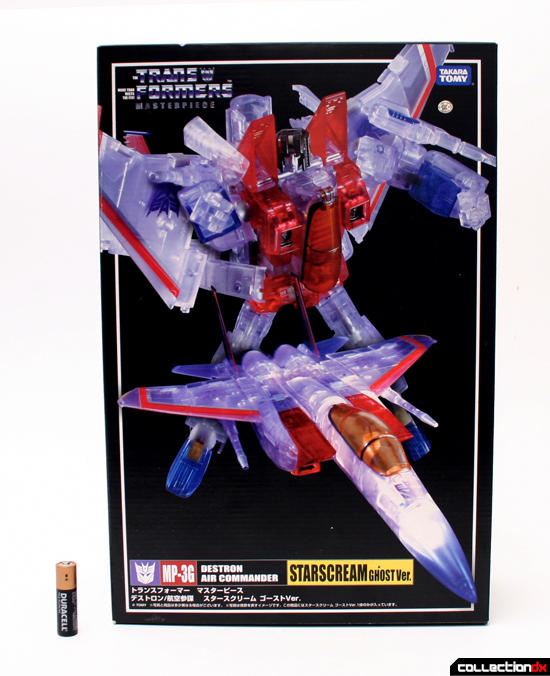 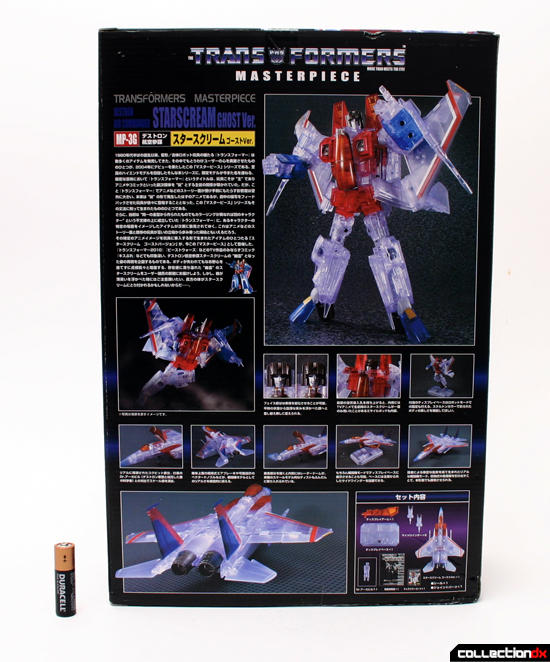 The inner plastic tray is bare bones, with only a few accessories, just the way I like it. Included is a pilot, a stand, two canons, and a couple of missile clusters. TakaraTomy includes a decal sheet, but I can’t imagine anyone marring the perfect transparency with gauche decals. 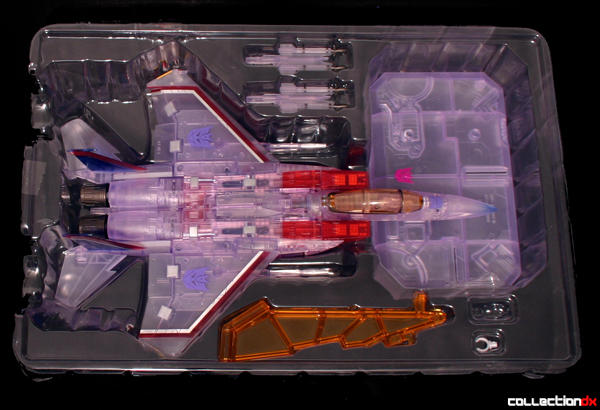 MPSGV arrives in jet form, which is really as solid of an alt-mode as any transformer ever possessed. The numerous panel lines and layered details are perfectly complimented by the clear plastic. The textural complexity is breathtaking. Gaze upon it, ye mortals! 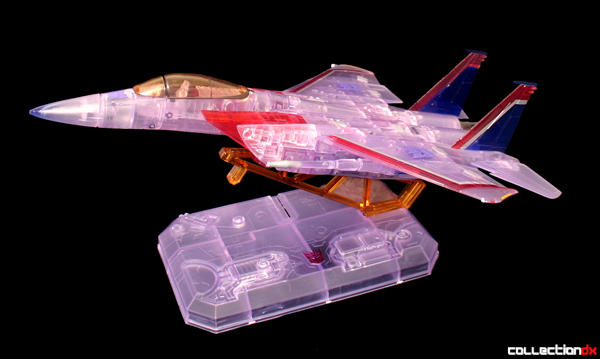 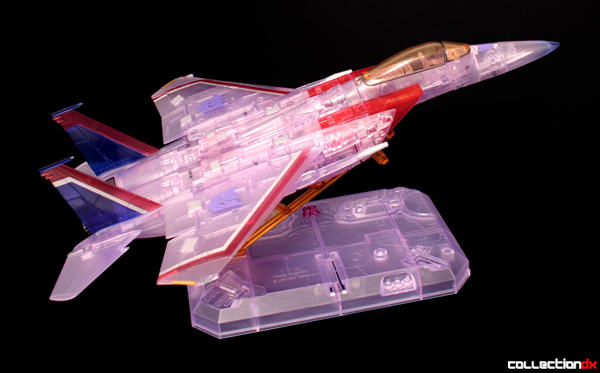 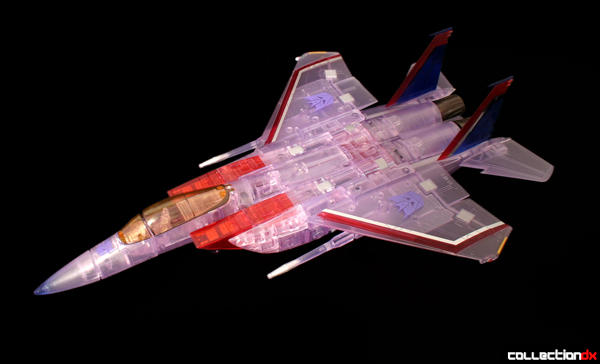 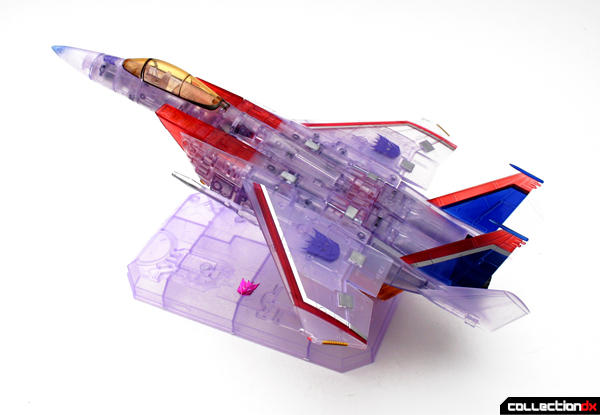 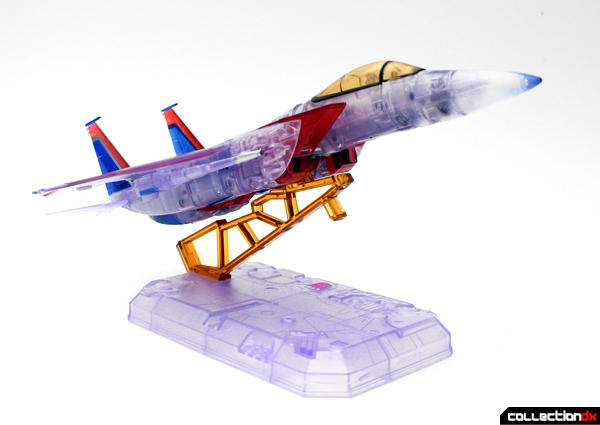 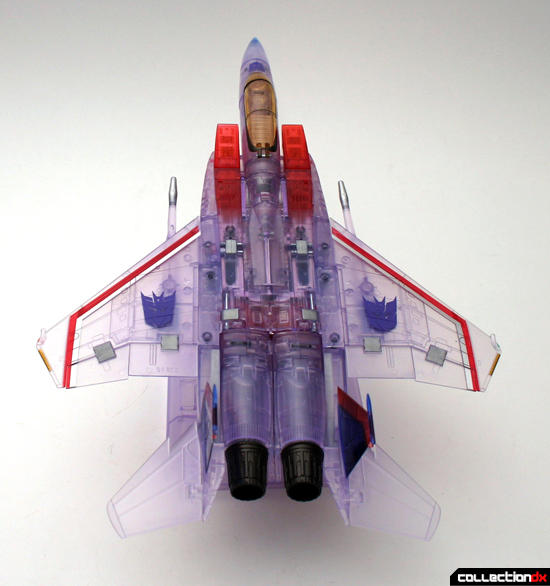 Unfortunately, many of the jet’s details are compromised by the lack of paint applications. The assorted hatches and cockpit details suffer with the vague blurriness of the product. Doesn’t bother me, though. 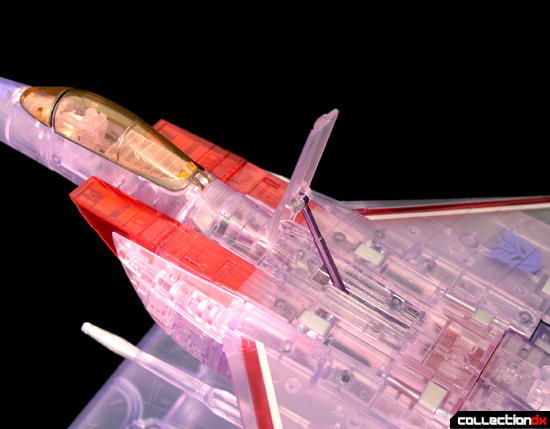 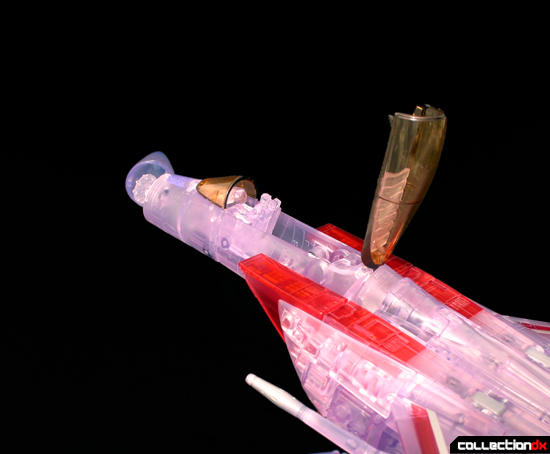 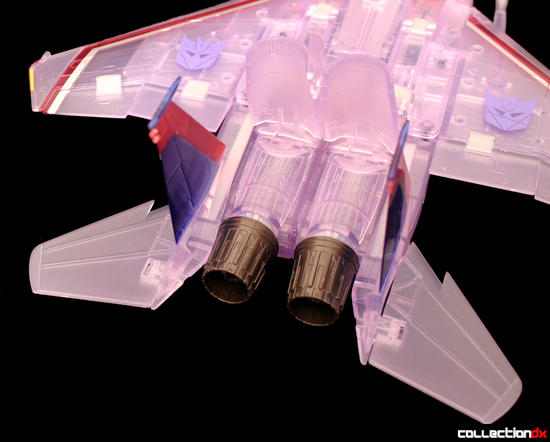 Transformation is complicated enough to be interesting, but becomes easier after awhile. The clarity of the plastic has the added value of revealing the figure’s exact diecast content, which consists of a piston at a rear panel, a largish connector bar for the cockpit, a set of bars connecting the top fuselage panel, and a substantial structural torso insert. All of the diecast has a kind of purplish cast, which is a little feminine for my tastes. 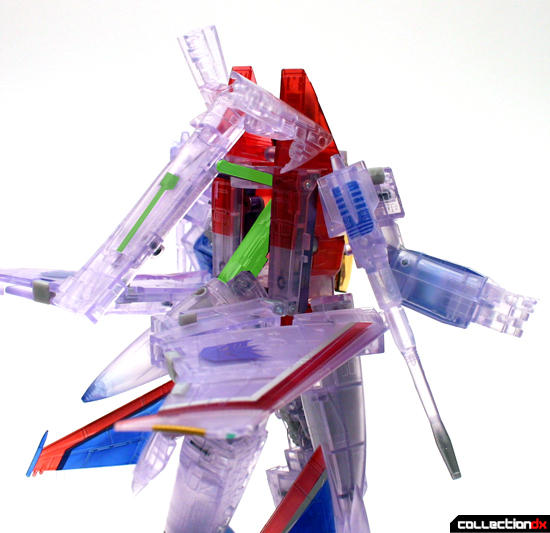 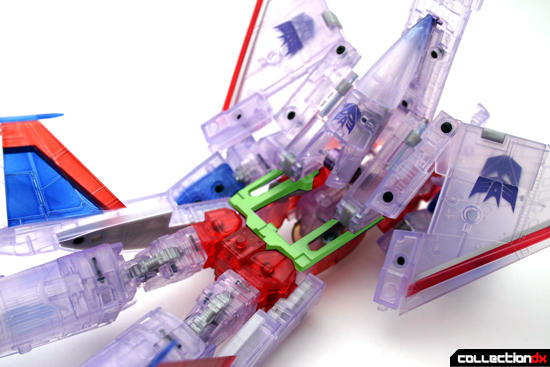 Starscream’s bot form is in many ways a let-down from the terrific plane mode. The figure suffers from a surplus of kibble and clutter, particularly when compared with its minimalist progenitor, or a sleek and compact Valkyrie. There are two tabs at the front of the shoulder clusters which will fall off a dozen times while transforming (echoes of MP Megatron’s woeful handgun panels). The legs are flanked by ungainly panels. A clutter of junk hangs on the back. 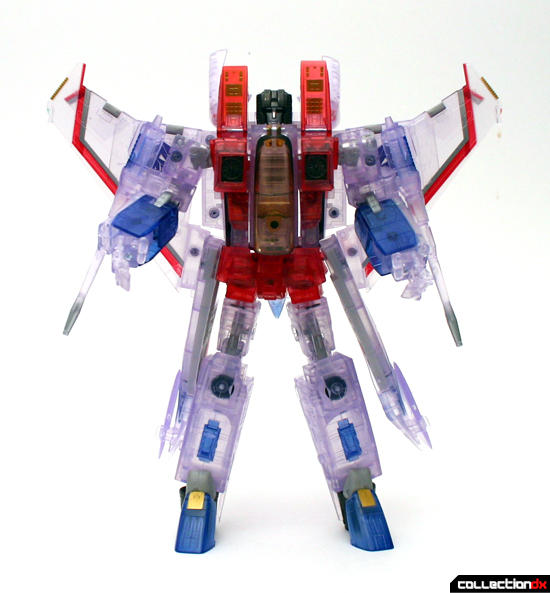 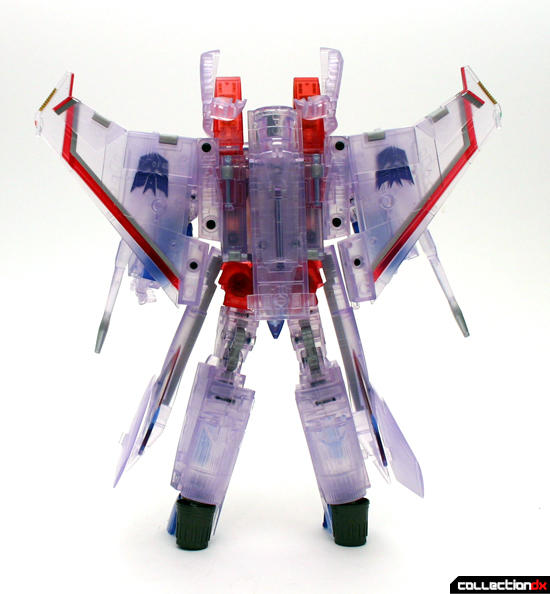 Posing is pitiful. Balancing the thing on two feet is a delicate process. You have to hunch him over sometimes just to keep him standing. 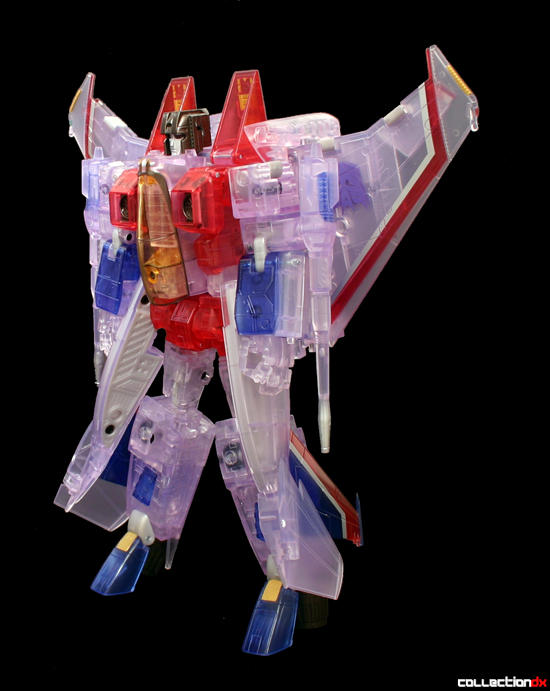 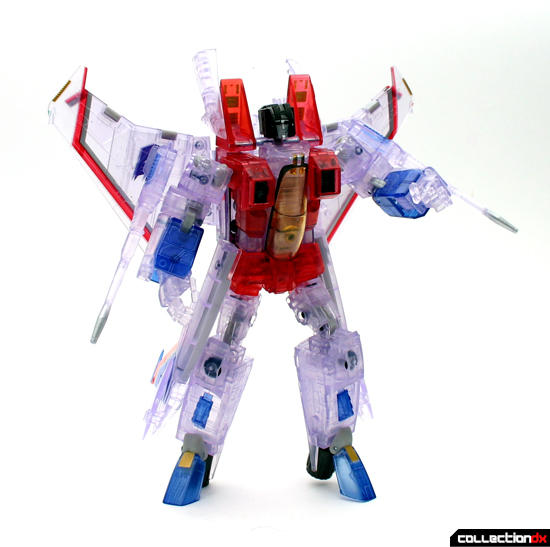 The use of the stand improves matters, but what a cop-out. So Starscream hovers very stylishly, befitting a ghost, I guess. 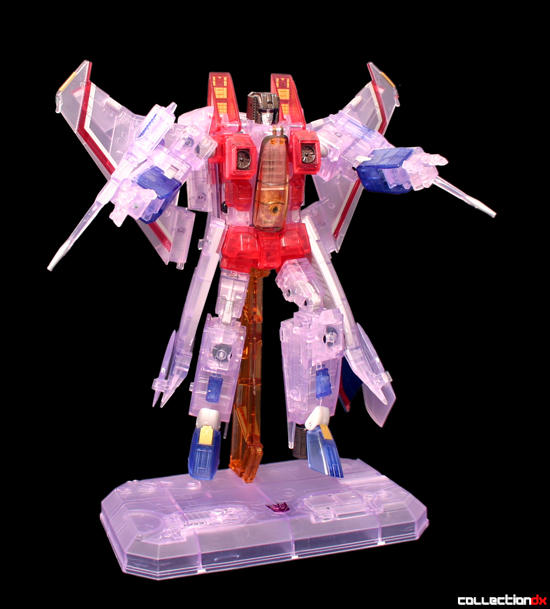 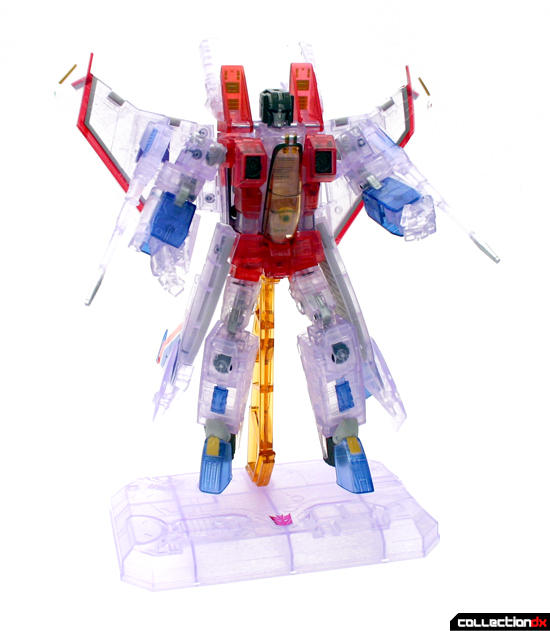 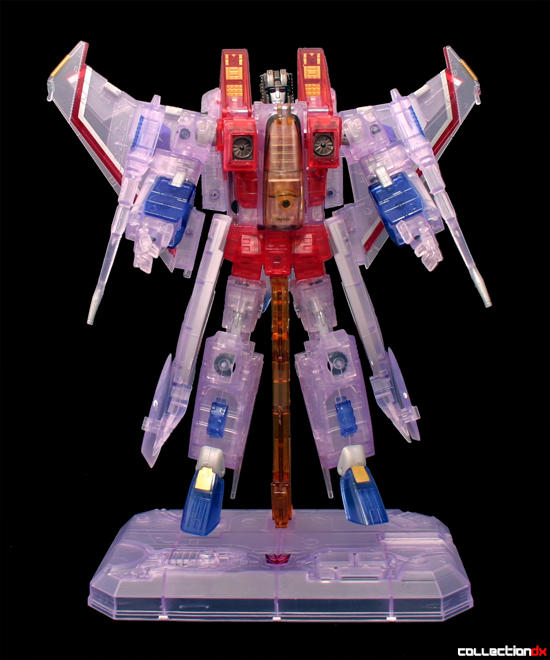 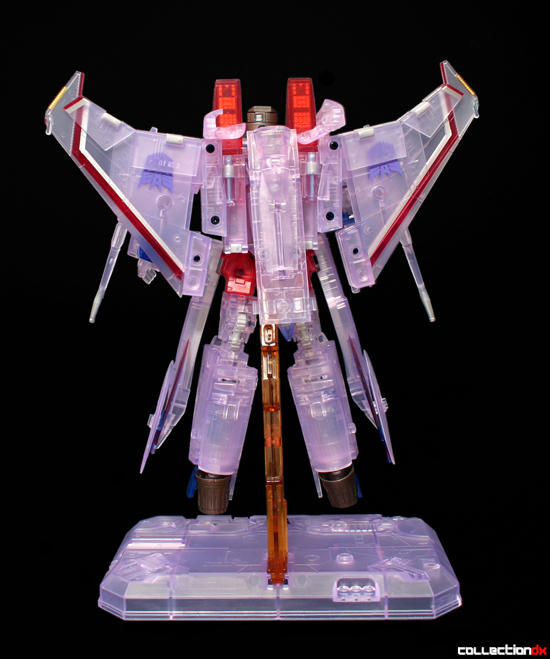 Starscream does succeed in being Starscream, though. The sophistication of the figure far exceeds other incarnations, and the overall design is a marvelous reinvention of a classic character in a modern form. And did I mention is was designed by Shoji Kawamori! 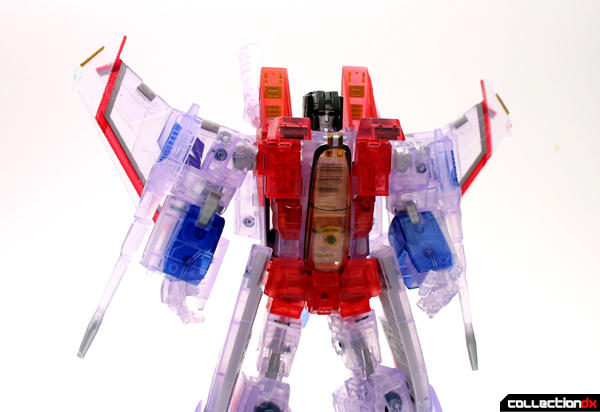 I do quarrel, though, with the pinkish hue of the bulk of the parts. Why couldn't these just be clear?

The MPSGV is a very nice looking display piece, an impeccable objet d’art, but not a wonderful toy. For me it’s sheer beauty overcomes it’s shortcomings as a plaything, but pieces like this are clearly objects first, toys second, which isn’t necessarily a bad thing.

God? Damned? Strong words indeed....Hmm.... for a Starscream fan, I take it Shoji Kawamori has disappointed you deeply. I can honestly see why but from my personal experience, this is far from worse Japanese TFs collectibles that I've played with like MP Megatron. I never seen a toy like that whose bare-all diecast parts tarnishes so badly & the tabs that lock the panels together in gun.mode breaks so easily. I think TakaTomy should've made a MP G2 Megs in the first place.

The "goddamned" is meant to be an enthusiastic endorsement. I love Shoji Kawamori, and him returning to TF:G1 is just awesome, no matter how mixed the results were.

Clearly a Masterpiece...that made me giggle, genius. My only experience with this mold is the unloved (at least until prices dropped) US Masterpiece Skywarp. I share the same likes and dislikes about this toy. My Skywarp takes up a lot of precious shelf space because of the required stand. I say required because mine will not stand up unless hunched over like you stated. I always thought the purplish hue was due to photography, because it looks clear in some photos, but it clearly (hehe) looks purple to me in these pictures.

Starscream takes up the same amount of shelf space with or without the display stand. As for him being 'hunched' over if displayed without the stand... I've never had this problem, check him out on my flickr page.

I crunch my figures together in the limited space I have so the extra width needed by the stand easily knocks off 3-5 smaller figures from having space- I cant crowd them as close as I need. Anytime I try and stand him up straight he takes a dive backwards. Ive fiddled endlessly with his heel to get him to stand on various different surfaces and he always falls.

Fiddle a little harder, it is possible, plus he looks great once he's standing there on his own without support.

I've always liked the Masterpiece Starscream design, even when it seemed everyone I talked to was all upset over the tail parts on the hips. Personally I like that because it reminds me of a samurai, but apparently I'm in the minority. I got the US release in the original Starscream colors, and while it's nice, I always found the finish a little lacking. This clear release looks really good. Is the finish smoother on this one?

I have six Seekers and this is definitely one of my favorites, at first I thought it would be sloppy due to mold degradation since my Hasbro Skywarp is loose and ill fitting but my Ghost Starscream is nice and tight. Your right about the standing part where it is a balancing act but I found if you swivel the legs outwards it does help a bit. Anyways great review.

I agree that an MP G2 Megatron could have been nicer than the MP seekers, or MP Megatron. So, its been a couple o' years since its initial release...when can we expect an MP Grimlock review?

There are tons of MP Grimlock reviews @ TF websites like Seibertron.com, & TFormers.com I think.

I gotta agree with Ginrai.
IMHO the design is sort of fluid in its execution, meaning it retains the look of the seekers in both forms.
In jet-mode they look like F-15 Eagles with a reasonable nod to the bot-mode kibble underneath.
In bot-mode they look amazingly similar to the TV show, again with the same nod to the jet-mode kibble to the rear.
Also each mode has gimmicks that are tailored to its configuration.
And its all done with the smallest fraction of parts swaping (the arm lasers/missles, which was also present in the G1 toys).
I just don't get how fans have so many issues with it, but oh well to each his own. lol

Mind you I did buy all the Takara vers. except for Starscream (it was all about those colors man).

As for Megs, it would have been "heresey" of sorts had they not done his G1 mode first. . . . . .
The fandom would be livid for there being a G1 Prime but not G1 Megs, but one that's "not even in the same generation?"
Don't get me wrong it would be cool to see it, hell I want one too!!
But for Has/Tak to step in that direction (at that time) would've been too off the radar.

I think the Masterpiece line was started to revamp the old G1 toys, also to catch the collectors all in one shot.
And in order to do that starting with G1 was the best place to go.
Consider it this way they're aim is to hit iconic G1 characters first then (hopefully) move to G2 in the future.
Either way I'm cool with the offerings we're getting so far casue I'm a fan, not a fanatic. :) lol

Clear or no clear plastic, I still prefer the prototype version of this mold.

Especially the legs of the prototype look better imo. I understand kawamori's
argument, but I don't think his solution made the design better.

I am always amazed at your reviews, next to Josh, the most professional looking...still curious how you highlight the die cast content. Makes my little "hobo" reviews feel ashamed:)

Thank for the kind words. The diecast highlight is just an extra layer in Photoshop. I've worked pretty hard on my raw photography, but nothing beats Photoshop.