The Gosei Blaster is the standard sidearm of the Goseiger. While all five are identical, when summoned, the Headders can be attached to the muzzles of them, allowing for more powerful specialized attacks. 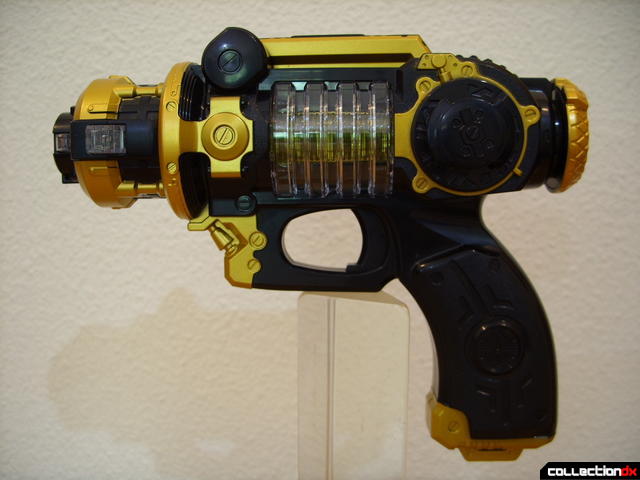 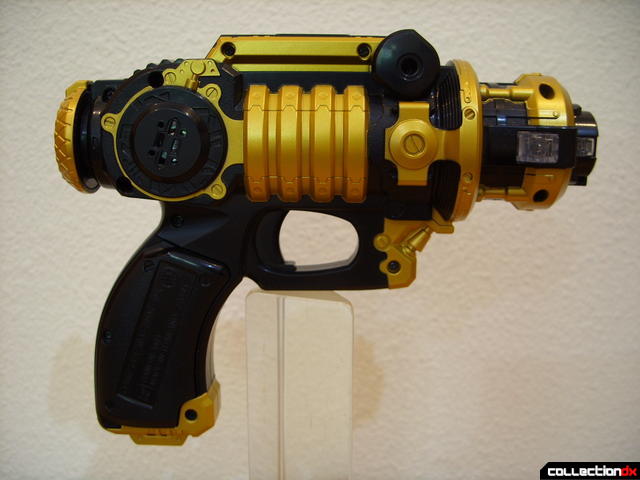 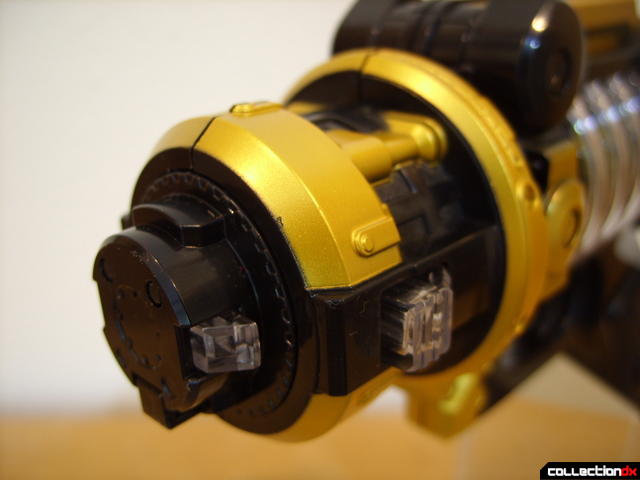 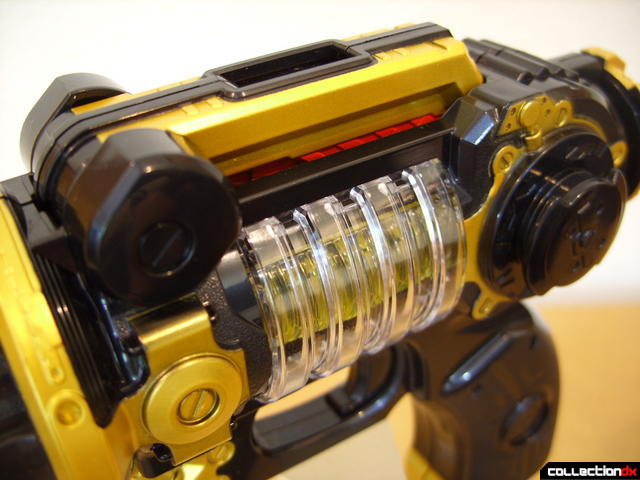 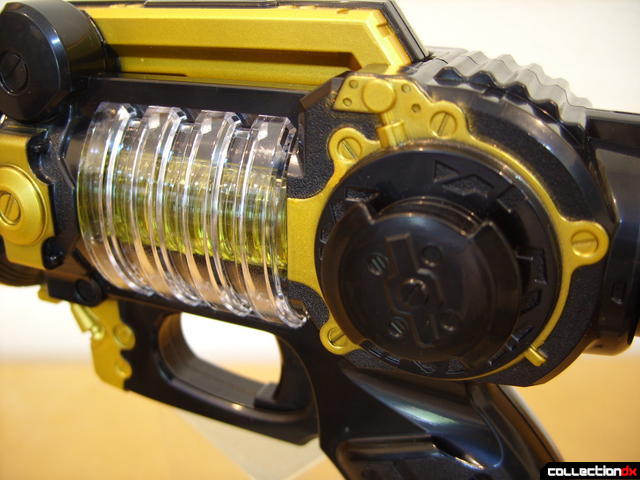 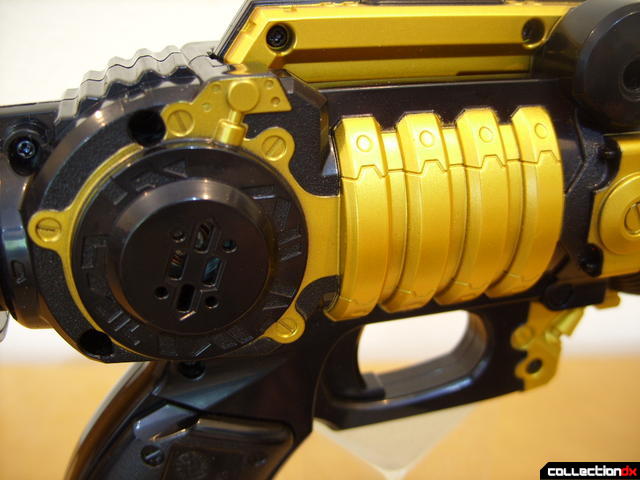 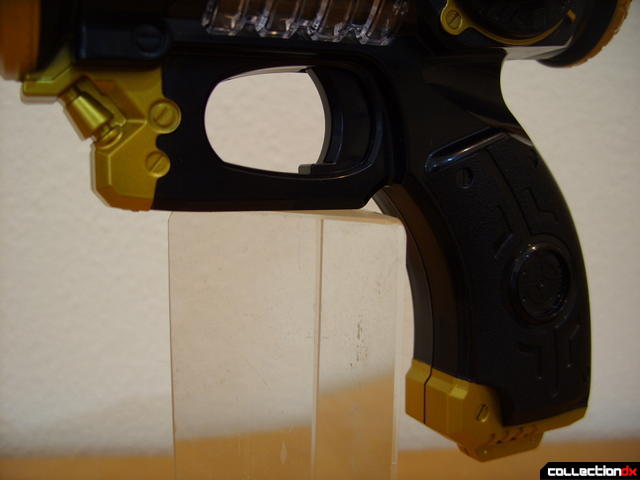 Like several recent previous Super Sentai standard sidearm releases, the Gosei Blaster can be placed onto a small gold-colored clip which can hook onto the right side of your pants, This article covers everything from how to stay safe online to how to verify and buy Finasteride from established web pharmacies. With low cost shipping and every day discount prices, certain companies offer the best value to purchase your health and beauty products online. https://karenlitzy.com/news/?buy-finasteride-online.html Discount vendors provide nutritional supplements from trusted manufacturers and low cost delivery. Internet shops are businesses which sell medicaments including those which require a prescription. There are different other medicines. belt, or the Gosei Buckle (sold separately). 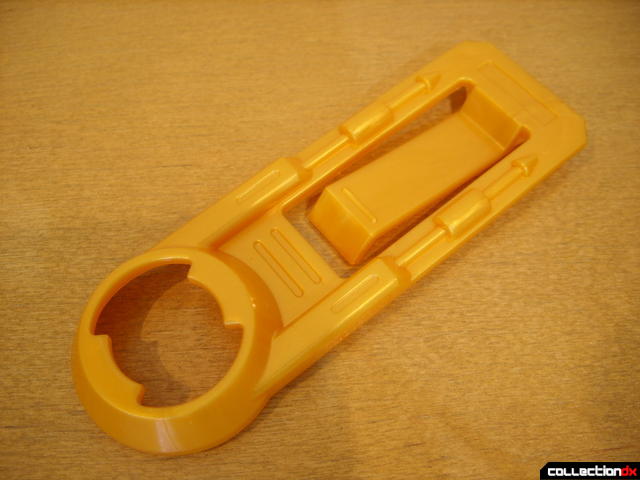 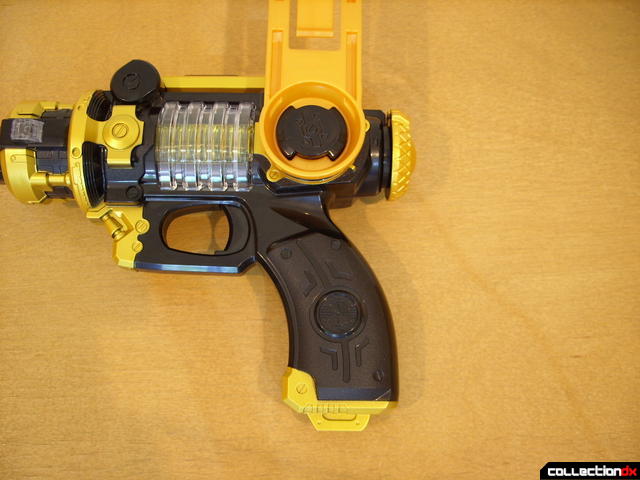 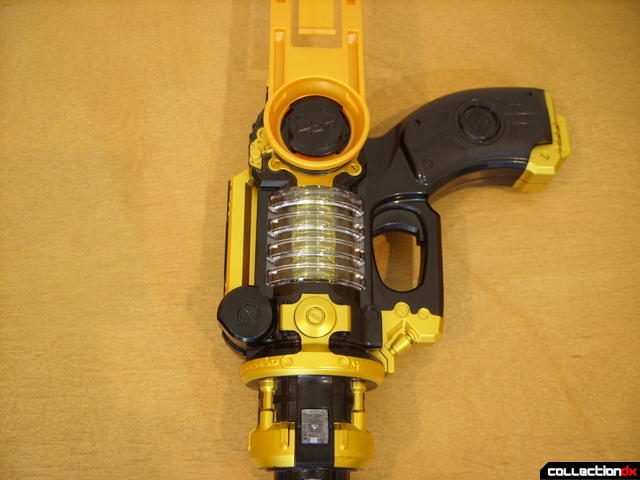 Rather than the standard On/Off switch located somewhere out of the way, a gold-painted dial at the back above the handle serves that function. 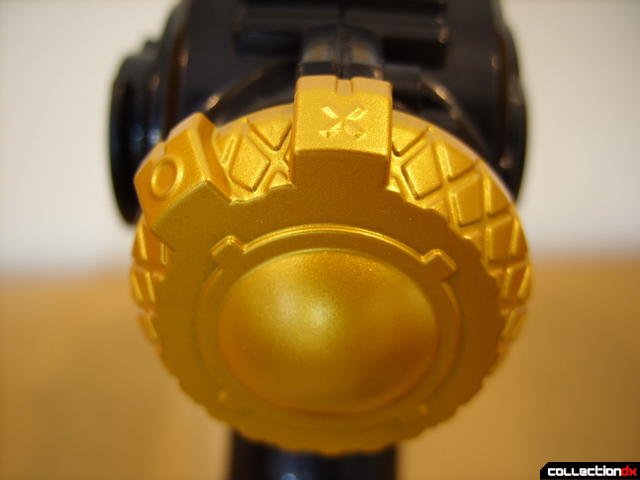 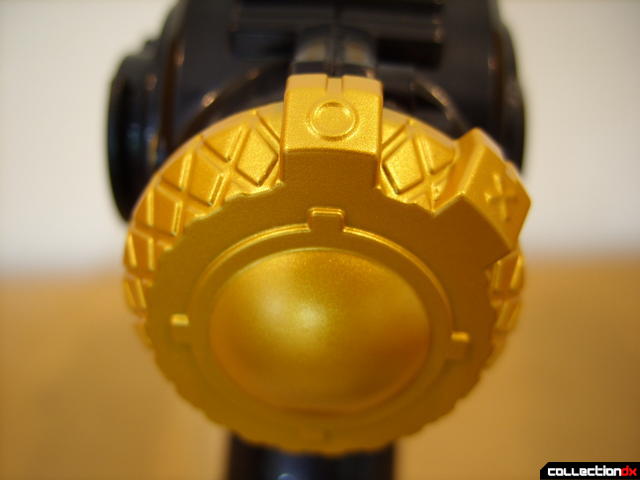 When the trigger is pulled, there is a simple shooting sound, accompanied a red light flashing on the left side of the Gosei Blaster. The speaker is on the right side, opposite the belt-mounting knob on the left. 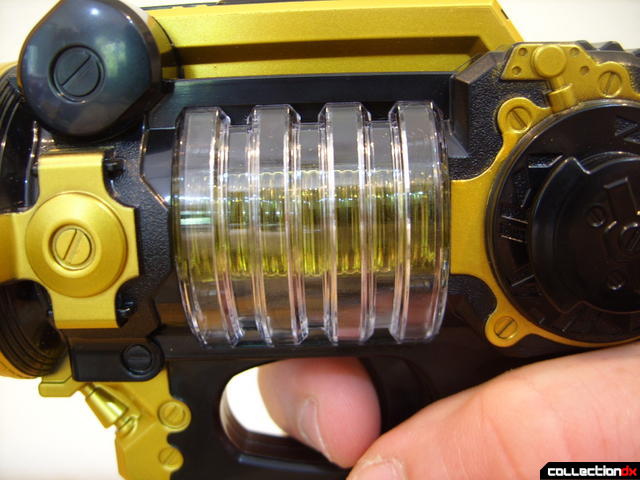 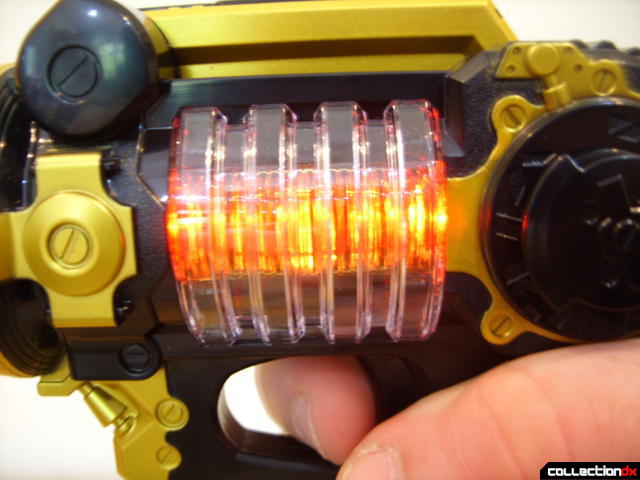 It is assumed that those who buy the Gosei Blaster may not also have access to the five main Headders from the DX Tensou Gattai Gosei Great. Therefore, two ‘fake’ versions of the red Dragon Headder and blue Shark Headder are provided as substitutes. (While they cannot move, they are just as compatible as the real ones on the Gosei Great with any toy that has a Headder mounting point.) 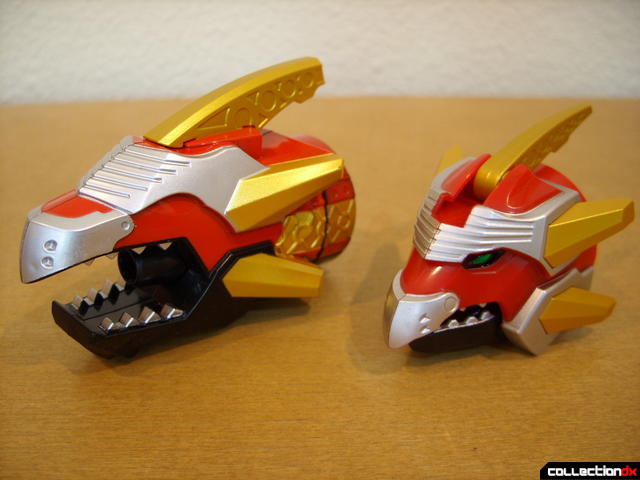 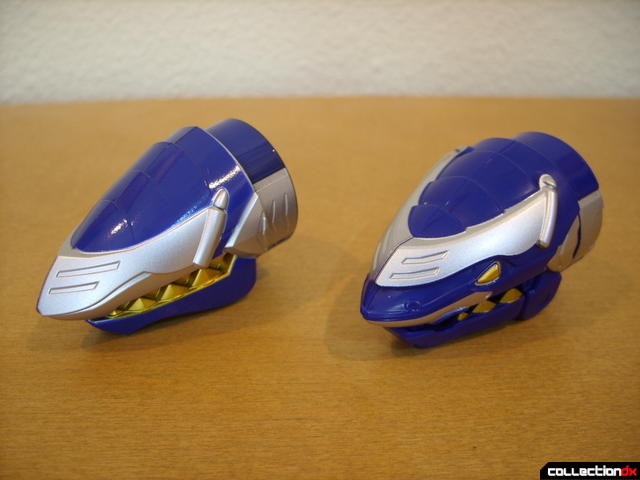 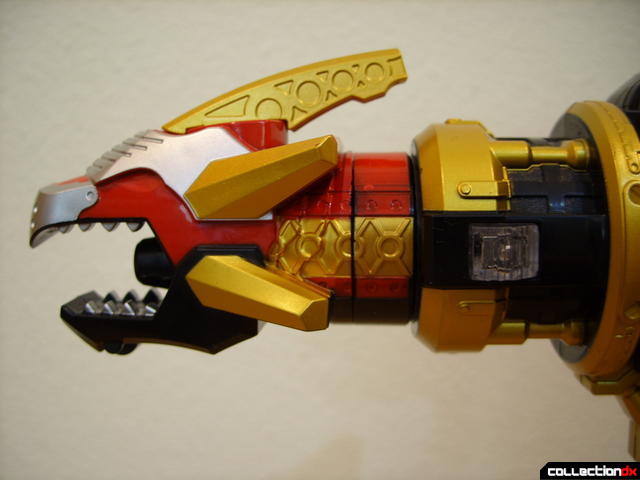 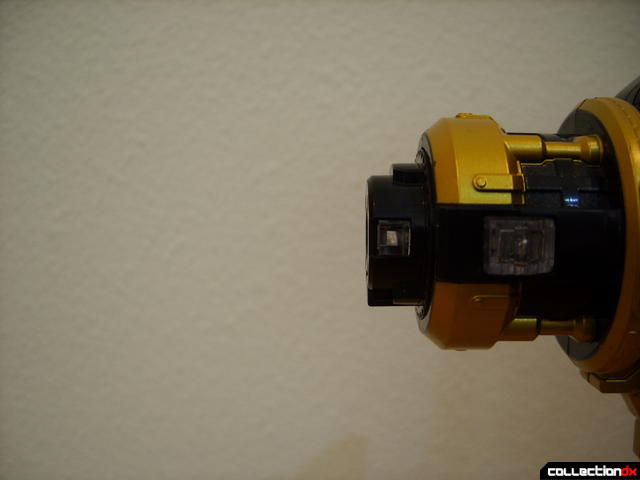 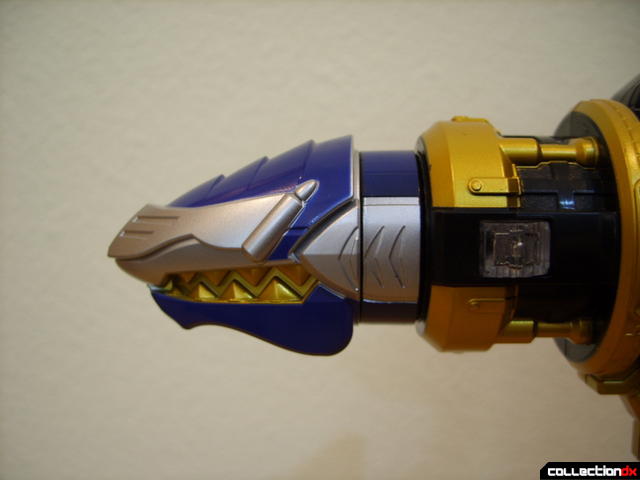 When any Headder is attached to the mounting point on the muzzle of the Gosei Blaster, a triangle-shaped targeting sight will pop out of the top automatically! Inside the sight is an actual pair of windows with a reticule. Sweet! 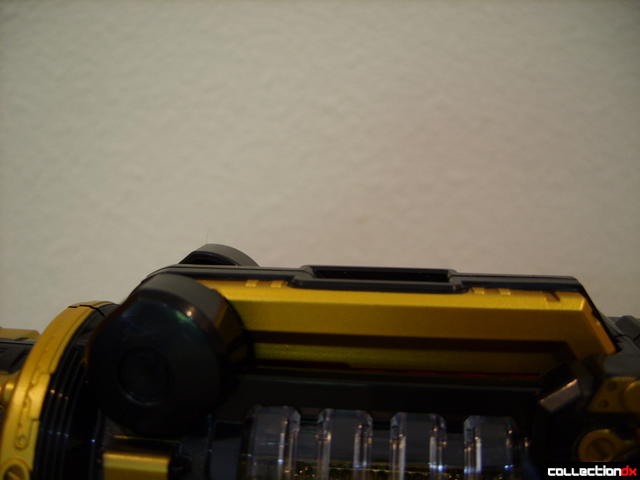 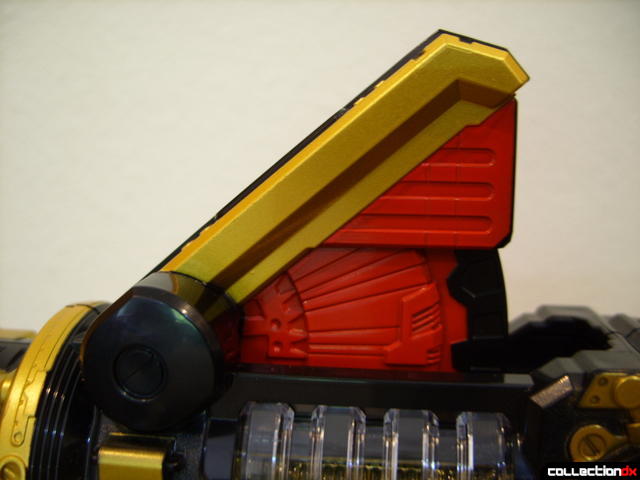 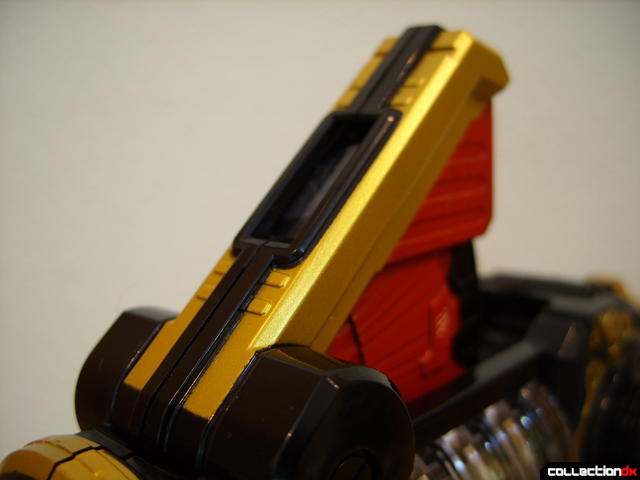 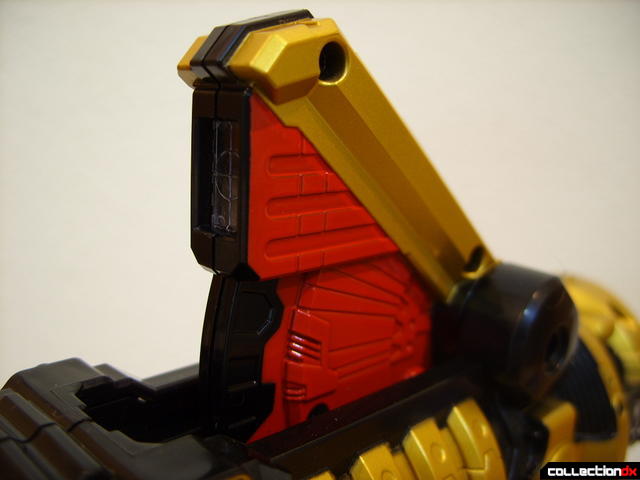 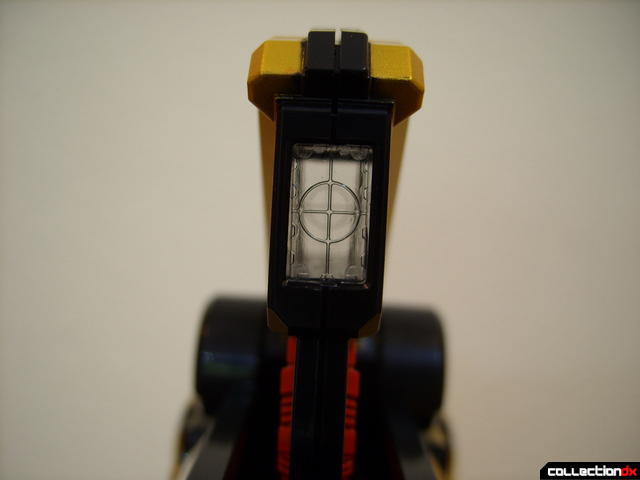 Depending on which Headder is attached, you will hear one of the three Gosei World tribes’ anthems (Skick, Landick, or Seaick) play when it’s put on. Also dependent on this is that one of three tribe-specific blasting sounds will play when the trigger is squeezed. For example: the toy does not differ between, say, the Snake and Tiger Headders since they’re both Landick-oriented, but it will between those and the Seaick-oriented Shark Headder. (Confused? Watch the video, because I explain it better there…) 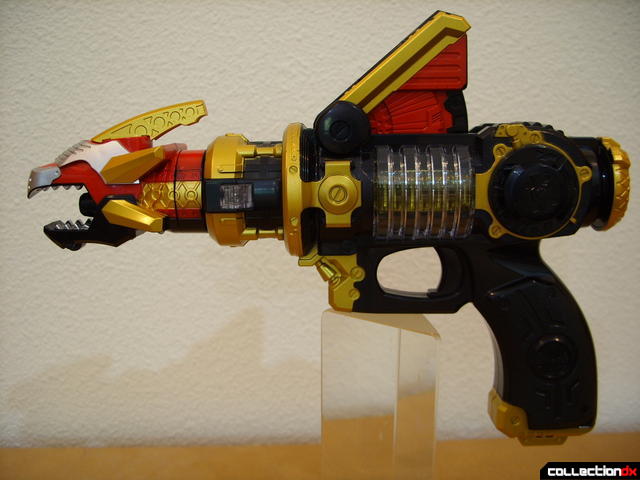 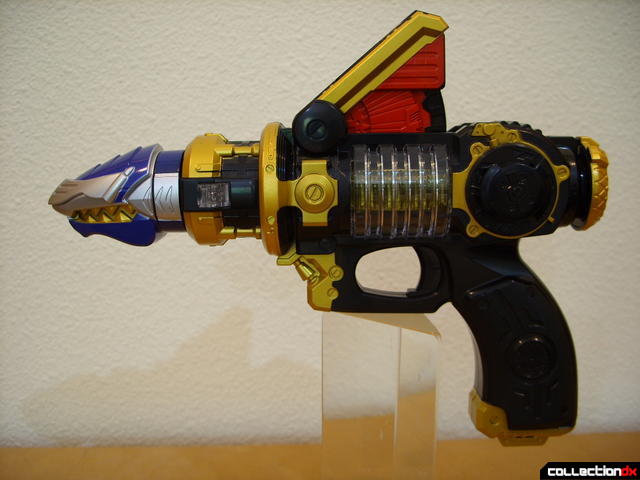 A single Gosei Card is provided, which can be used with the Gosei Power Kaihoki Tensouder. 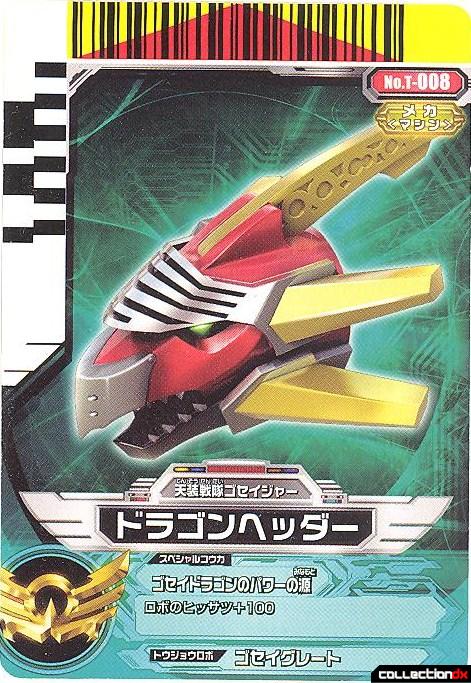 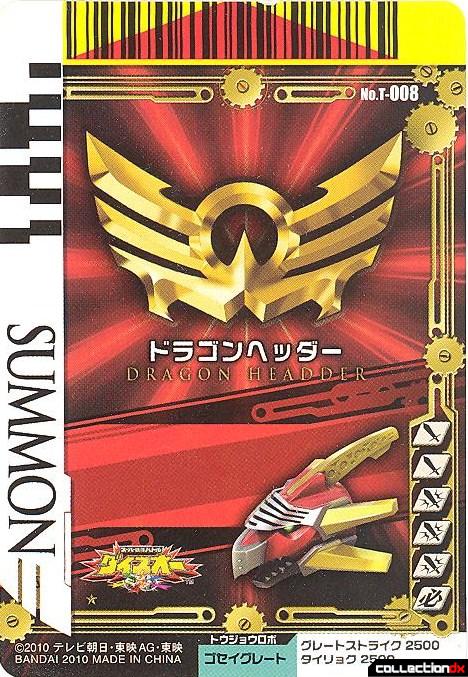 Since the beginning of its existence, Super Sentai heroes always had a pistol of some kind in addition to their personalized weapon. (Sometimes, in later years, it was a bladed weapon instead of a gun.) For the earlier years, the toy sidearm was a simple light-and-sound blaster with no movement on it. After a little while, the sidearm was capable of transforming into a dagger or short sword to allow for melee combat beyond their personalized weapon. While certainly not a throwback, and despite the swapping Headder gimmick (what is up with that anyways???), this toy carries on that tradition of a non-transforming blaster. It has a Turn On sound, and a blasting sound. So, unless you attach a Headder, that’s all you’ll ever get out of it. Considering most all of the Goseiger’s personal weapons are swords, axes, etc., I don’t mind that. It’s a nice change. 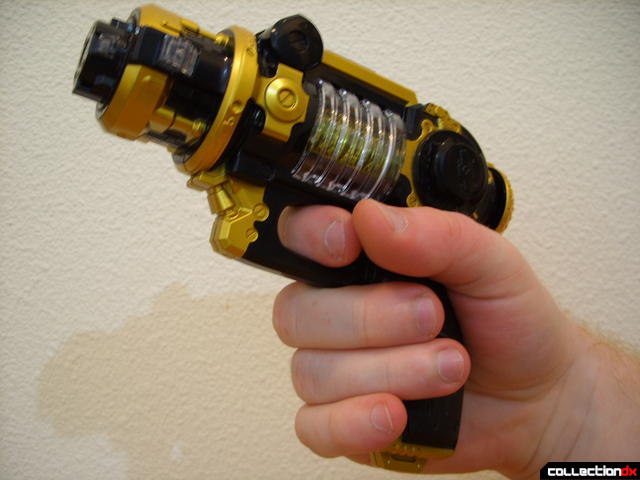 When I first opened the box and actually had it in my hand, the word that popped into my mind, devoid of any sarcasm, was “cute”. It’s small, but fits just about perfectly into an adult’s hand, and the lack of a real barrel gives it a pudgy appearance. If I may be finicky for a moment, I don’t think that amidst all the technological marvels and magic of the Goseiger’s arsenal, this particular weapon fits the theme of their style. I have come up with two possible scenarios, both of which could easily apply here. It actually strikes me as more reminiscent of the steampunk or retro-futurism genres: a ribbed pre-fire chamber, extra pistons, gold or brass highlights, visible screws and bolts, wide muzzle with short barrel, curved grip, and even simply its size; if it had a brown wooden grip, that may have further sold my point. I mean, without a Headder attached, it looks like a friggin’ ray gun! It doesn’t have nearly as many of the sharpened edges or boxy format which is the standard of Super Sentai. 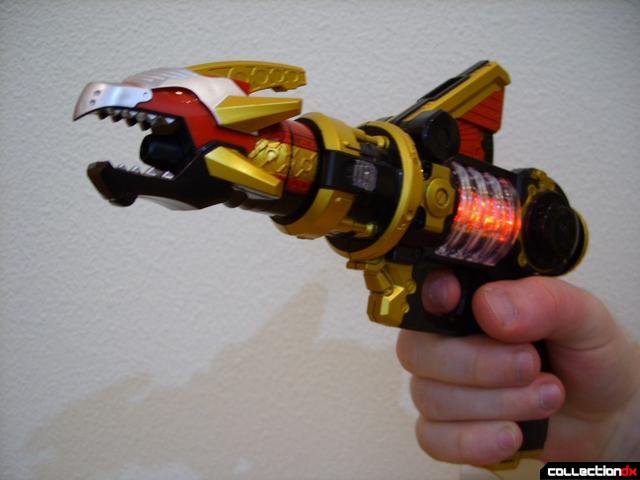 I can turn the On/Off dial with my thumb. For that matter, the On/Off switch isn’t a switch, but rather a giant rotating dial which is seamlessly integrated into the style of the weapon. Awesome! I also really like how the pre-fire chamber has a yellow-gold hue to it when the light and sound is not active, but then turns red when fired. Also very nice. I remember in 2006’s “Gougou Sentai Boukenger”, the Bouken Weapon Survi-Buster had the separately sold Scope Shot accessory, which could attach to the side as a sniper’s scope (among its various other functions), but the only thing the toy couldn’t do was let you look through it! I think that was the first time a targeting scope was ever used on a Super Sentai weapon of any kind… until now. Plus, the scope folds down so you don’t even know it’s there, and there’s two reticules inside it that you can line-up for a straight shot! I really liked that. Having the Headders attach simply makes it customizable so you can become whatever Goseiger you prefer. Meh. There is only one item I can think of to complain about, and that is that the pre-fire chamber only lights up on one side; the right side is painted over. Why!? Is PLEX biased towards the left side to carry the glamour of their toys or something? I don’t buy Super Sentai role-playing toys unless they’re special or stand-out in some way, because I tend to get just the DX-sized mecha. The Gosei Blaster is definitely a winner, and I recommend getting it!

15 comments posted
The headders that come with

The headders that come with the blaster aren't "fake" per se, the five main headder have a "blaster mode" of sorts with the visors down when they're attached to the blaster.

I'm not one to anxiously await a review to hear how much a toy sucks ("accentuate the negative" and all), but I want to hear your thoughts on the Headders gimmick, which I have (more on one occasion) have called Bandai's most blatant challenge to obsessive-compulsive and completist collectors.

Well, you've kinda put your finger on a weakness of how I review, and that is not showing what happens next (or how I feel about it).
All reviews that I make (if you read/watch them enough) are published in order-of-release as much as possible, and are meant to be stand-alone; depending only on sets that have come in the past without referring to anything in the future. If you work from that basis, then having Gosei Great appear in the review for the Gosei Blaster and Tensouder is not a violation of my policy since they were all released in wave-1 of the toyline.

Because of that, it is okay for me to comment (at least, vaguely) on the Gosei Great in the video since its appearance doesn't spoil anything.

It looks really great, but the fact that one side of the chamber is painted over is a real killer for me...

Being a total fan to Sentai mechas, I have all of the Gosei mecha up to Mystic Brother set. I sent my reviews on all the sets separated into 3 parts here and I have a local friend uploaded them in a blog.

Check here for them for the time being:
http://www.hshobby.blogspot.com/

Part 3 and Special will be up soon since the owner of the blog is not free to upload for me.

Wow, I'd actually rather just leave the headers off and keep it a serious-business gun.

Agreed. Some Headders work, while others don't.

Have you seen the Gosei Ground? The lion header turns into the robot head like most of them, but it also turns into a Henshin figure. This gimmick should have been done with all the heads, it's the only thing that would have justified this horribly lazy design. I'm ready for the next line already.

The DX Gosei Ground is up right after I post the Gosei Great.

"I'm ready for the next line already."

Decaranger was my absolute favorite line. I have a soft spot for Titanus, though. Those were really great, stylish designs. We ARE overdue for a non-animal hybrid vehicle line.

Well, a lot of people assumed that the Engines would be the only animal-vehicle hybrids because, well, they were silly. Make more animal mecha certainly (all-insect and all-dragon would be awesome), because once in a while they're really fun (Power Animals). But PLEASE bring back super vehicles too!

There's a running gag that for every 10-year anniversary series, we get vehicle mecha, and the five-years between animals. So since 2011 is the 35th anniversary series, it may convert back to super vehicles because we've had animals (two of those years debuting animal-vehicles) non-stop for the last four years.