If there is one thing I have come to notice in reviewing these A3 figures by Volks, it's that their approach to design a toy stems from their vast experience with resin kits. A3 figures are very much "sculpt first and articulation second" kind of toys. However the degree to which this affects the each figures varies and whereas the F-4 Phantom may have some amazing articulation hampered by incredibly poor knees, the F-14 Tomcat is more middle of the road with tiny feet making it top heavy and thus hard to pose. Volks's overall approach is not all that dissimilar to that of a Kaiyodo Revoltech. The both are made from large blocks of PVC plastic held together by standardized joints, but it is the A3 line's fidelity to the original line art that often causes equal amounts of joy and frustration to a Muv-Luv fan. Interestingly enough one of the lower profile grunt robots ended up being one of the best figures in the line. 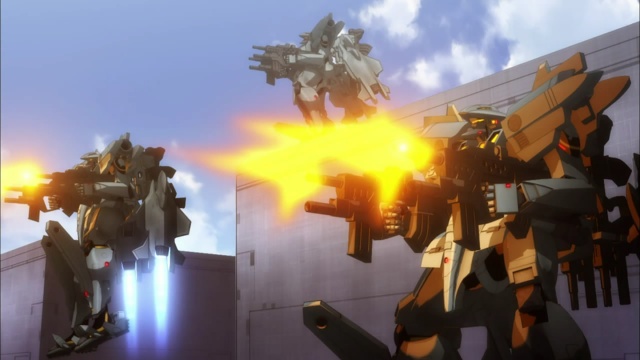 A group of unmanned F-16s fire fruitlessly at an oncoming main character.

Even in the Muv-Luv universe, the F-16 Fighting Falcon fulfills the role of a light Tactical Surface Fighter (TSF). With its skinnier build, it emphasizes speed and maneuverability to plug the gaps in the front lines alongside its heavier allies. In the Total Eclipse anime, it ended up serving as a filler design for our heroes to encounter both as friends and as foes.

It's also the basis for spunky Chinese pilot's J-10X machine, which meant both toy makers and CGI artists could easily reuse the design with minor tweaks! 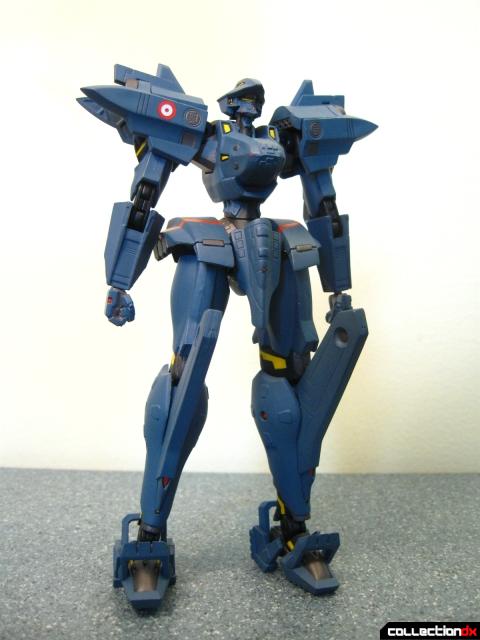 There are two variations on the Volks A3 F-16 Fighting Falcon figure: the aircraft gray colored regular release and the limited edition F-16A version done in a striking dark blue color. For the purposes of this review I'll be focusing on the dark blue one simply because I just like how it looks. Like most A3 figures the Falcon stands about six and a half inches tall and is made mostly out of hard PVC plastic. 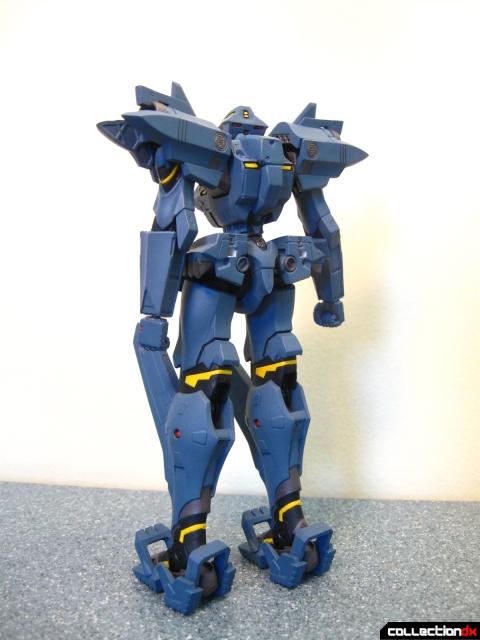 The skinniness of the Falcon is most apparent in the narrow yet well defined shins. Even the characteristic knee blocks of an American TSF are a lot thinner on the Falcon. 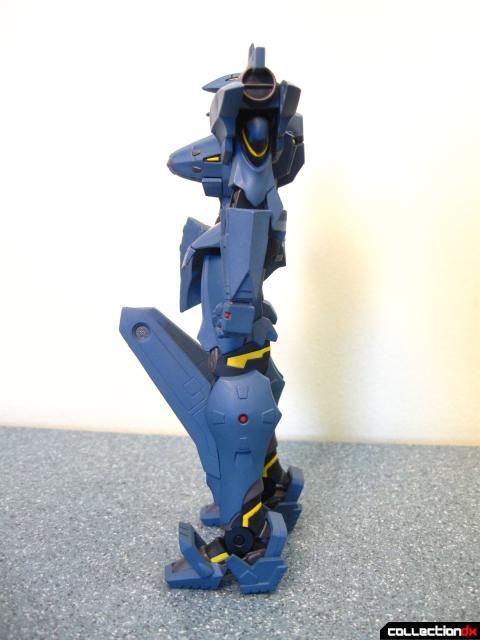 Unlike the bulkier Tomcat, the Falcon has appropriately sized feet so it stands a lot better. 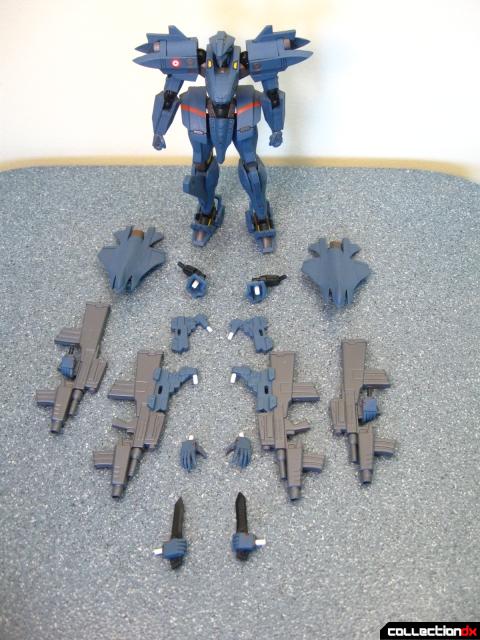 The figure comes with the standard loadout seen in the other A3 figures I have reviewed. Everything from the spare hands to the different mount pylons swap in and out on thick PVC pegs. 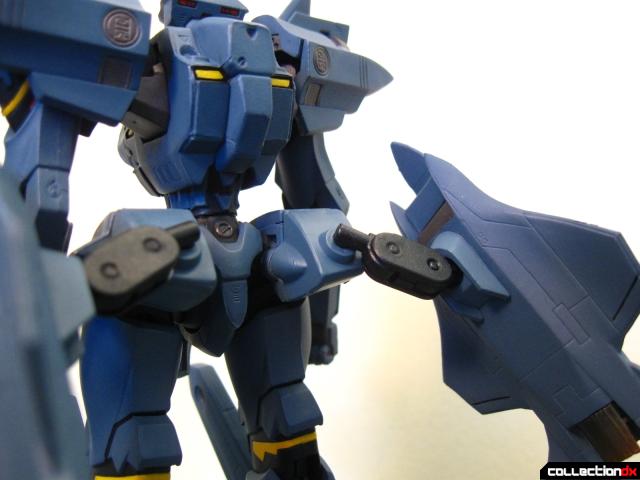 Unlike the with the Tomcat or Phantom, the Falcon's jump units attach very securely to the figure's skirts. This is thanks to a nice long and thick square peg that slots quite deeply into the rear of the skirts. Oddly enough though, they do use a slightly modified double A-Lock joint that attaches to the mounting point in an L-shaped connector. This means the jump units can't really angle inwards as easily as they do on say the Tomcat. However, it does keep the rear of the figure a little clearer for when it comes time to stick some huge guns on the back. 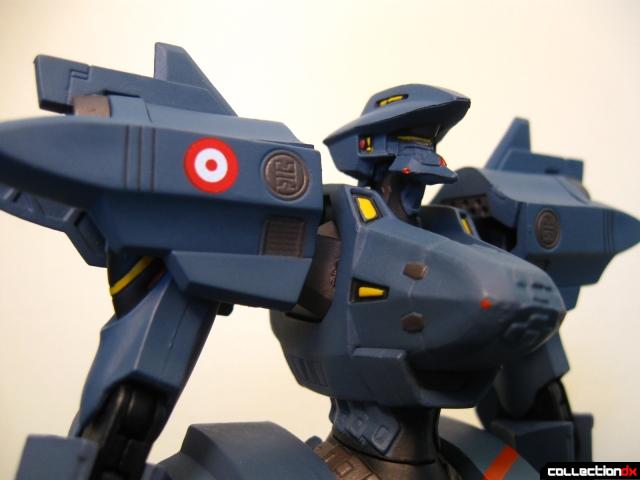 This particular F-16 belonged to Ibrahim Doğulu, a Turkish Army officer who is now in charge of Project PROMINENCE and serves as the requisite veteran commander guy in the Total Eclipse anime. Much like in real life, the F-16 was exported all over the world as an inexpensive yet highly adaptable weapons platform. The roundel on the shoulder is in fact that of the real Turkish Air Force and nicely complements the gorgeous blue used for the figure's body. As a PVC figure, everything on the Falcon is painted or tampographed on with a pleasing matte finish. Much like other TSF designs, the Falcon incorporates details of its real life namesake in several ways. The shoulders are the most obvious link as they look just like the rear end of an actual F-16. The TSF also has one intake on the bottom of its torso to mimic the F-16's signature "gaping mouth" air intake. Similarly to the Muv-Luv Tomcat, the Falcon adapts the front of the real plane into a jaunty cap for the robot's head. Again I love how the American TSF's have that very impersonal single visor design to add an air of cold inhumanity to their machines. 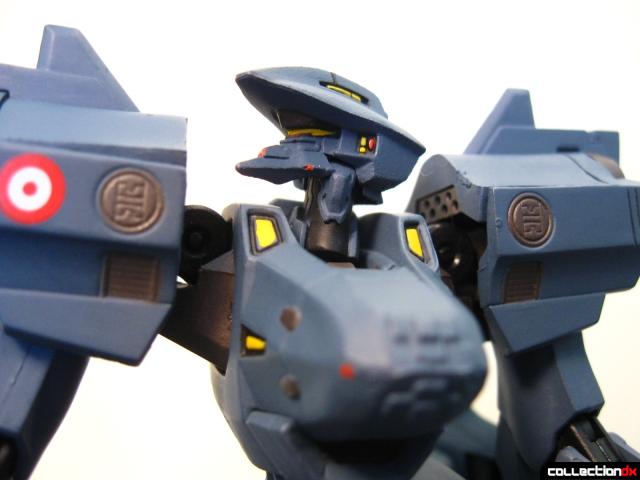 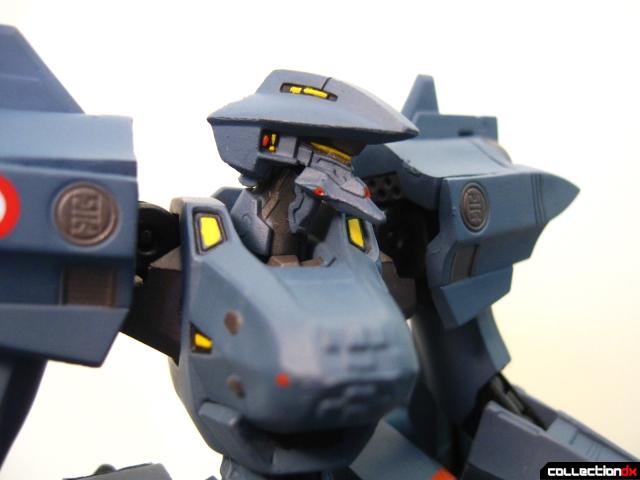 One thing I absolutely love about the Falcon is how for once the head can freely move around like on a regular action figure. Whereas both the Phantom and the Tomcat had irritatingly (or painfully for the former) limited neck joints, the Falcon uses both a ball-joint at the base of the neck and a swivel where it meets the head to let the figure look all around. It's said the neck is the most sensual part of the TSF and Falcon really flaunts it. 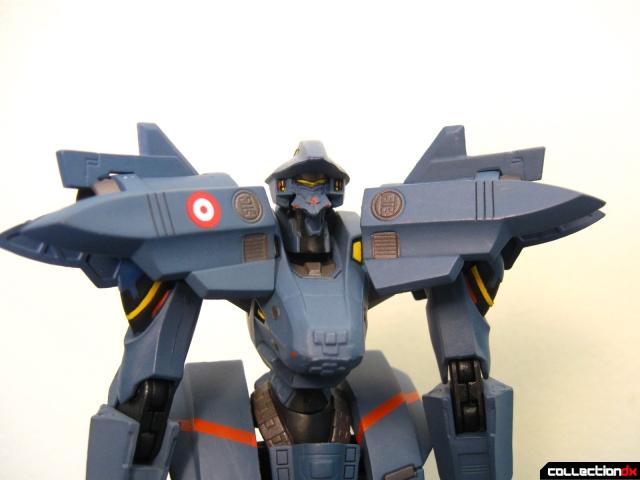 Overall the joints on the Falcon are very smartly designed. Each shoulder pauldron has a hinged flap in front to allow for more clearance and arms can move in and out quite freely. 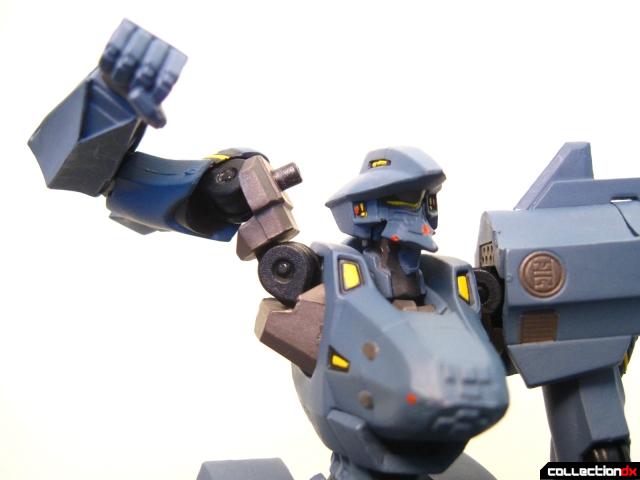 There's actually two of Volks's patented A-Lock joints used to make the shoulders work. The whole pauldron is just pegged into the top of an A-Lock joint so I took it off to show you what's underneath. Each A-Lock joint moves in a certain direction with a rather loud click. Sadly the main pivot point on the shoulders are kind of loose on both of my Falcons. 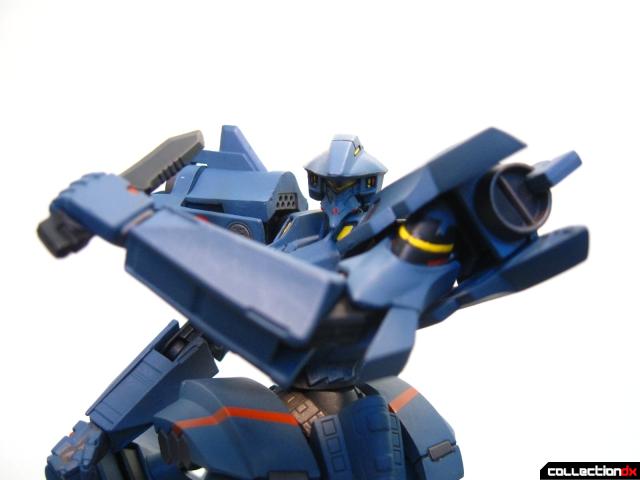 The elbows are done with a double A-Lock joint and can curl up all the way. Just be sure to mind the edges of the upper arm and forearm as they can rub against each other depending on how you move the joints. 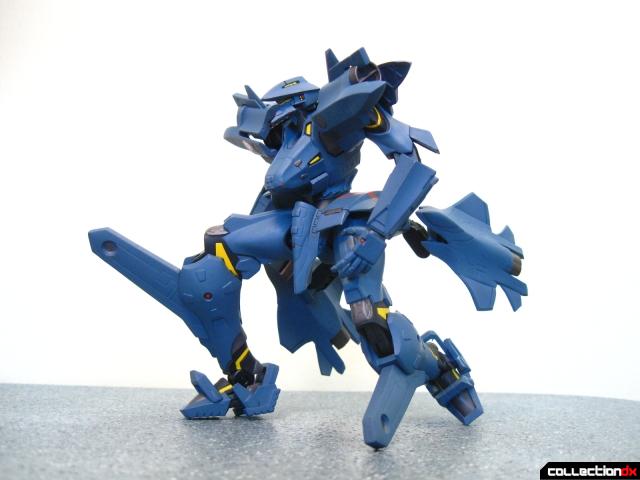 The legs on this figure are also very well done with all the major joints cooperating with almost none of the sculpt impeding their range of motion. The torso has a free moving waist with an A-Lock joint hidden under a sculpted sheath that lets the upper body tilt up and down. 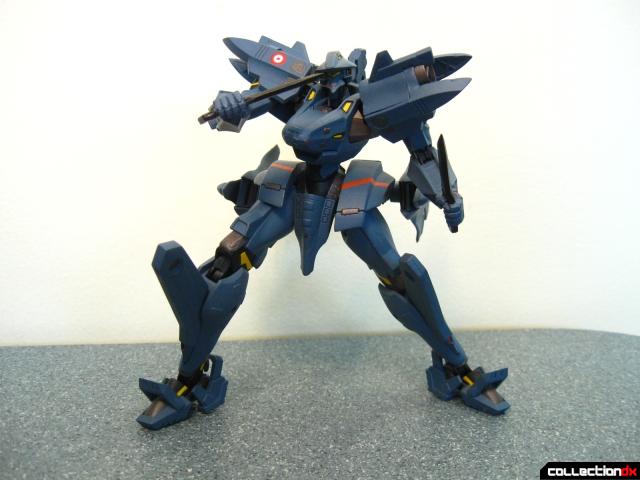 The ankles are well suited for putting the Falcon into wide legged poses. They rotate and tilt with a degree of freedom that's on par with a Muv-Luv Revoltech figure. 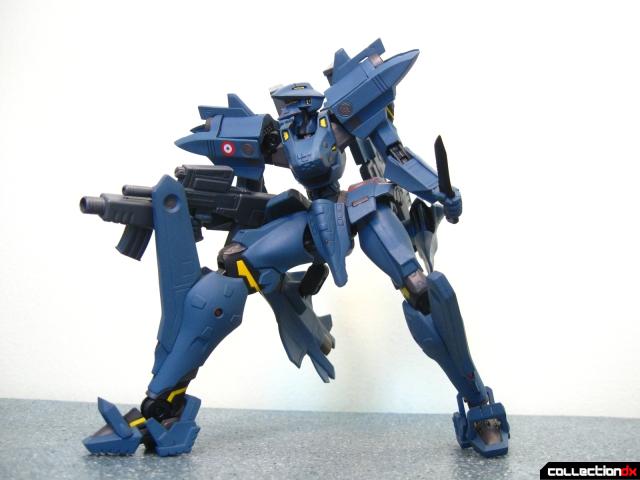 It's that small bit of extra thought put into the design that lets the Falcon do a nice aggressive lean pose. 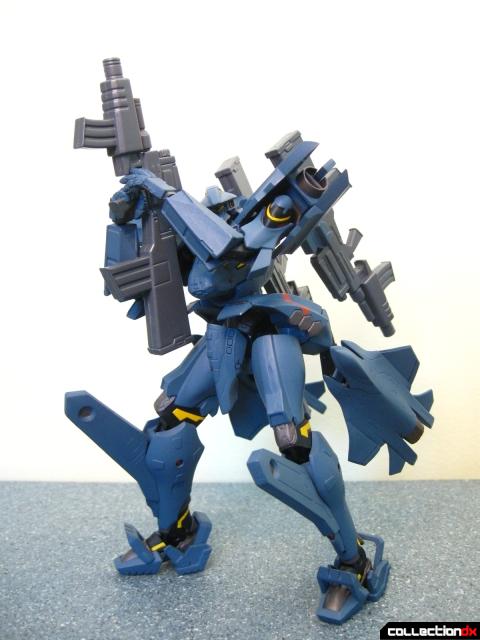 Even loaded up with guns the Falcon is pretty stable. 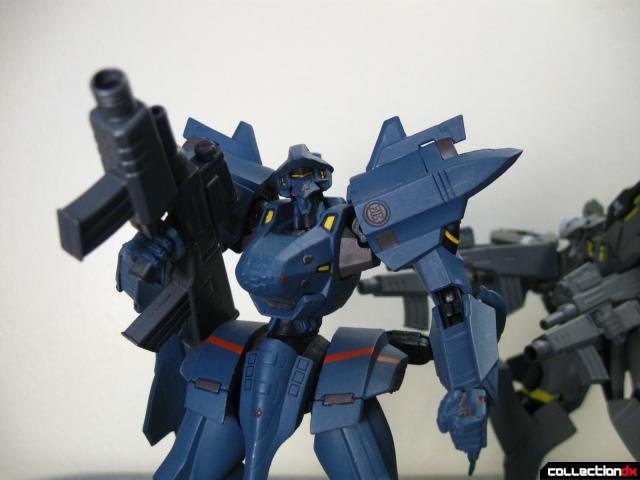 Falcon front and center with a Tomcat mulling around back for support. 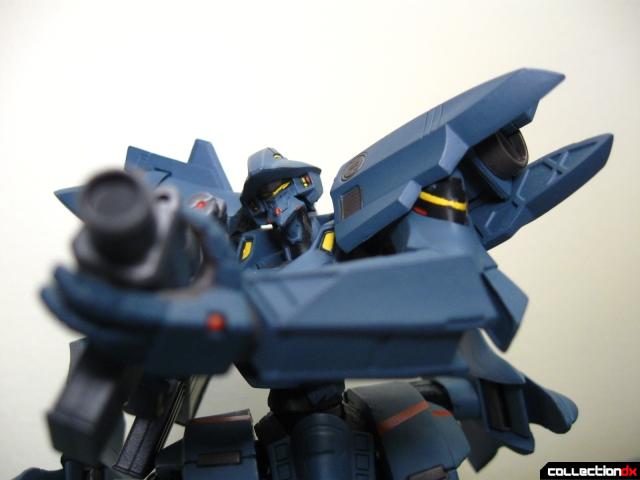 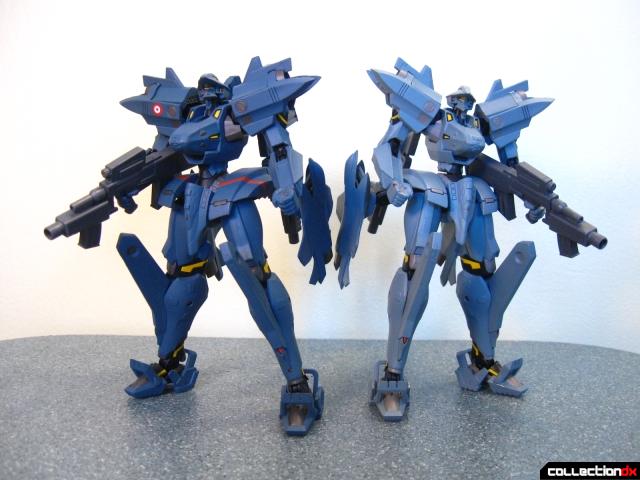 As I alluded to before, I actually own two of these guys. Thanks to a little diligence in checking Mandarake, I was able to get both for less than half their 6500 yen MSRP. Quite literally two for the price of one! The standard Falcon release on the right is done is a more realistic aircraft gray and has no tampographed markings. While both come with extra waterslide decals, only the limited edition figure had its country's roundel applied to the shoulder right out of the box. 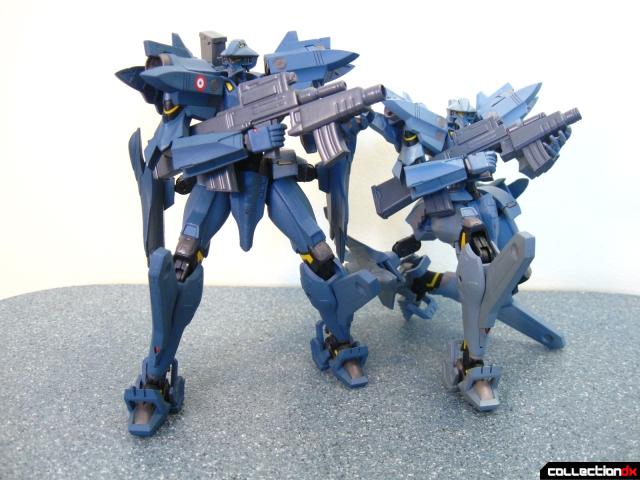 Still I can't complain as they make quite a striking display together. 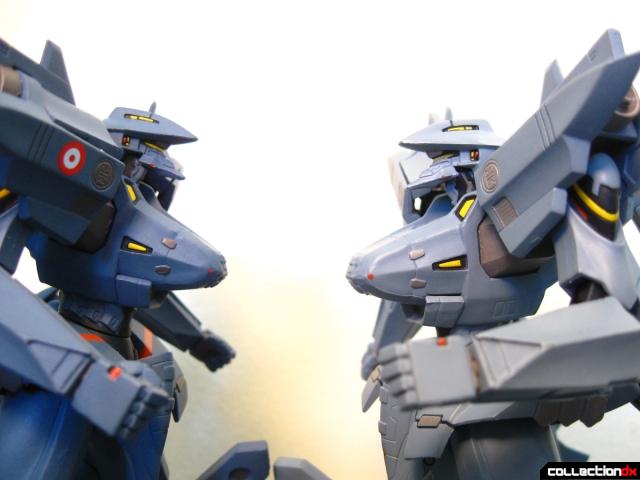 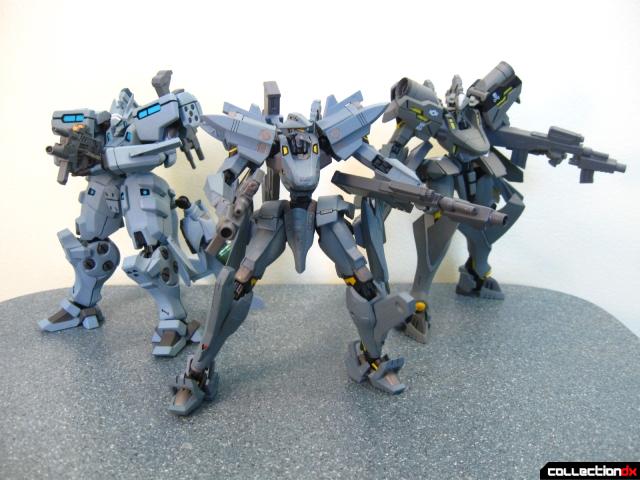 The Falcon's svelte frame makes it stand out from my other large American TSF figures. 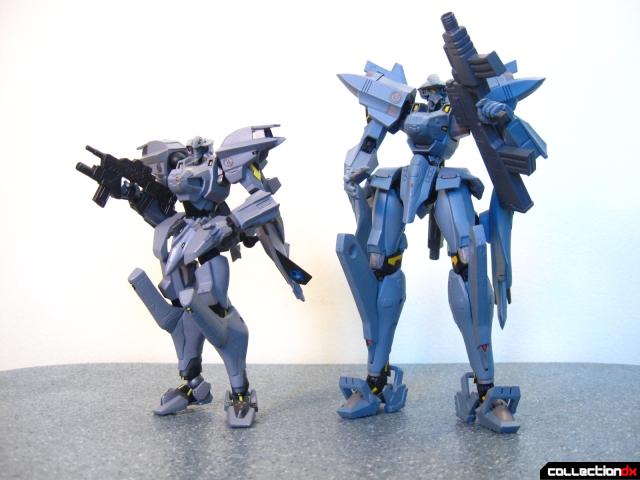 All the Volks A3 figures stand about an inch taller than a Kaiyodo Revoltech. Here is the F-16 Fighting Falcon with its competitor the F-18 Super Hornet. Just as in real life, the two machines competed in a fly-off to be America's next light fighter with the winning F-16 going to the Air Force and the losing F-18 being revamped for the United States Navy. Sadly there is no A3 figure of the F-18 but there is a Kotobukiya model kit that is roughly the same size. 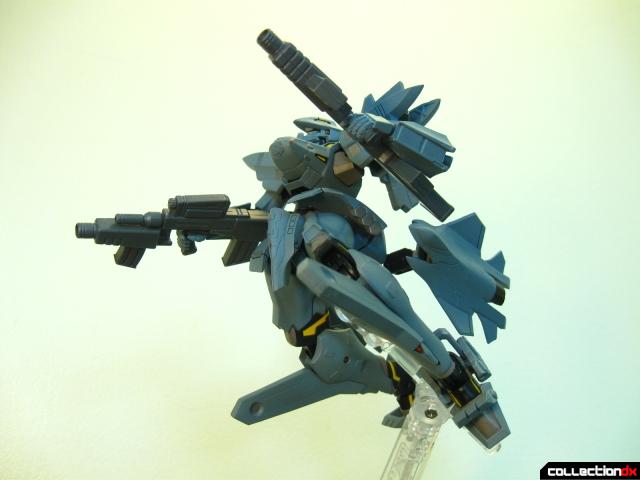 With a little cajoling out of a Yamato Mighty Block stand, I can take my Falcons into the air. These guys are light enough that they don't seem to be straining the stand unlike say... that chunky Phantom... 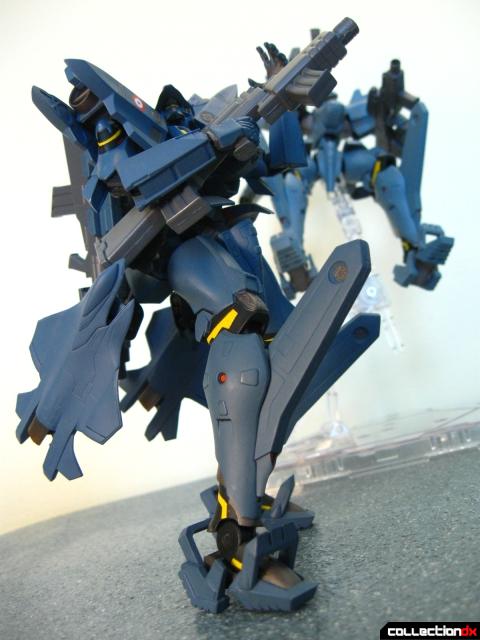 The Turkish TSF calls in for some backup in an international training exercise. 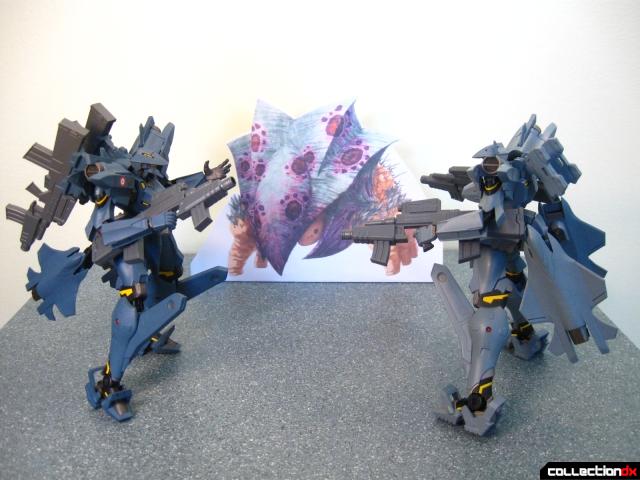 The JIVES simulation system creates virtual representations of the BETA aliens with the utmost accuracy!

"Ok remember the best way to fight a Destroyer-class is to get behind it!" 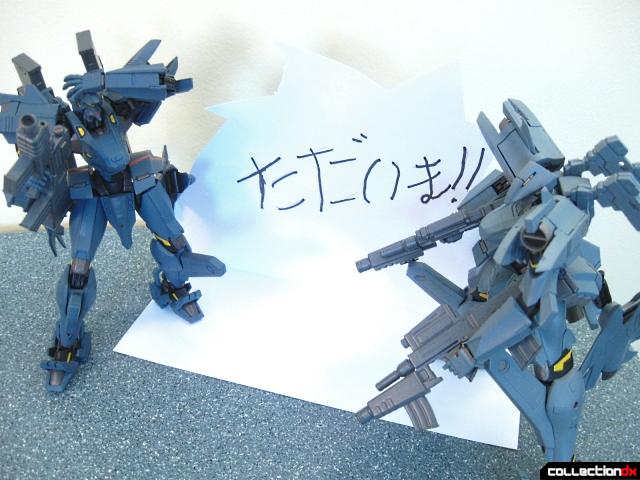 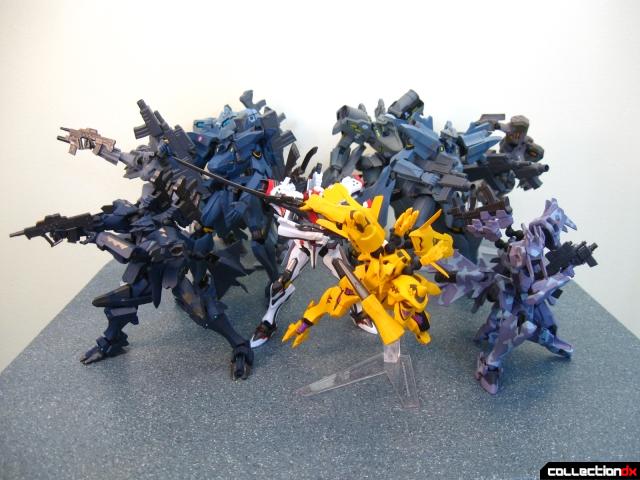 Here's a gratuitous group shot for those wondering how many Tactical Surface Fighters I own at the moment :3

Once again I am fascinated by the Muv-Luv Alternative A3 figures. I bought the these two not expecting much from a couple of cannon fodder designs but the F-16 Fighting Falcon turned out to be one of the best I've had a chance to handle thus far. While the Revoltechs continue to occupy the cheap and dirty action figure goodness niche for Muv-Luv fans, the A3 F-16 manages to strike a satisfying balance between line art accuracy and pure posing fun. Sadly the weird looseness of certain joints kind of drag down the experience. I'm guessing this is a common problem for the F-16 figures as it managed to happen on both variants. Still, I am more than happy with them and getting two at half price only sweetened the deal.