As one of the leaders in military aircraft development, the United States is the source for high performance war planes used by countries all over the world. Some are built primarily for export while others are adapted for use by non-US buyers. The story of the F-14 Tomcat's foreign service is rather unique in aviation history as the sole non-American user is now regarded as hostile to the country of the machine's creation. It was in the midst of a historic deal between the United States and the last Shah of Iran that the country underwent a regime change with about 50 Tomcats having been delivered. To this day, the Islamic Republic of Iran Air Force still flies its F-14's nearly two decades after it has been retired from service in the United State Navy. In fact the most successful Tomcat pilot isn't a short man with the need for speed, but an Iranian officer by the name of Jalil Zandi. 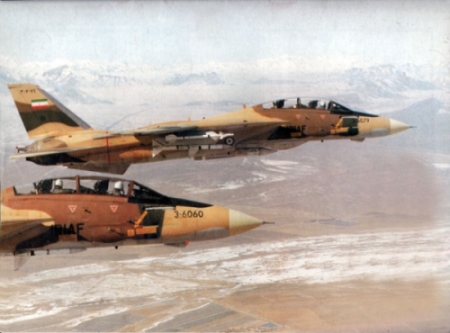 A pair of IRIAF Tomcats.

The creators of Muv-Luv (âge) are noted aviation enthusiasts and try to incorporate as much military history into their world building when it comes to their mecha: the Tactical Surface Fighters. Since their version of the F-14 is a giant robot, âge adapted the real life history of this mecha's namesake to the Muv-Luv universe. In a take on actual events, the F-14 Tomcat was offered up to the Empire of Iran but this time as the enhanced F-14EX Super Tomcat which itself is based on a real upgrade proposal. Iran's Azriel Test Flight were featured in the original light novels for Muv-Luv Alternative: Total Eclipse where their Super Tomcats were pitted against the feared Scarlet Twins from the Soviet Union. While this encounter was left out of the anime adaption, it was later reintegrated into the Total Eclipse - Rising manga. 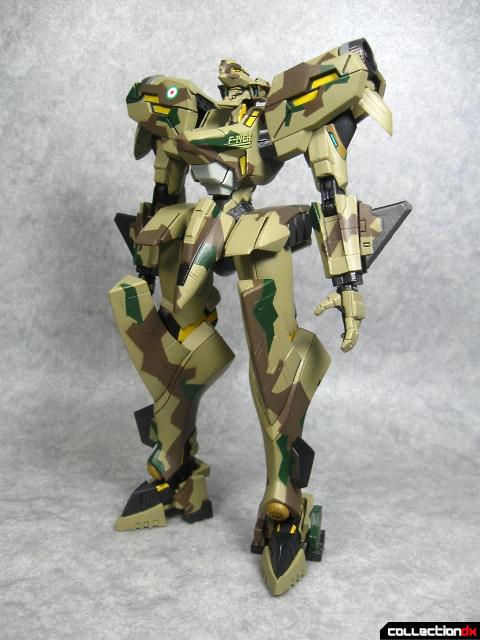 Standing roughly six inches tall, the Volks A3 F-14EX Super Tomcat is a slight remold of the regular F-14 that I previously reviewed. It has a few changes from the base model which include a new forehead, codpiece, larger engine nozzles on the shoulders, and extra fins on the forearms and legs. Slots for the fins are present on the standard F-14 which demonstrates just how closely Volks was working with âge to fill out the A3 line with TSF figures. Of course the most striking difference is of course the new paint scheme that emulates the real life Iranian Tomcats. 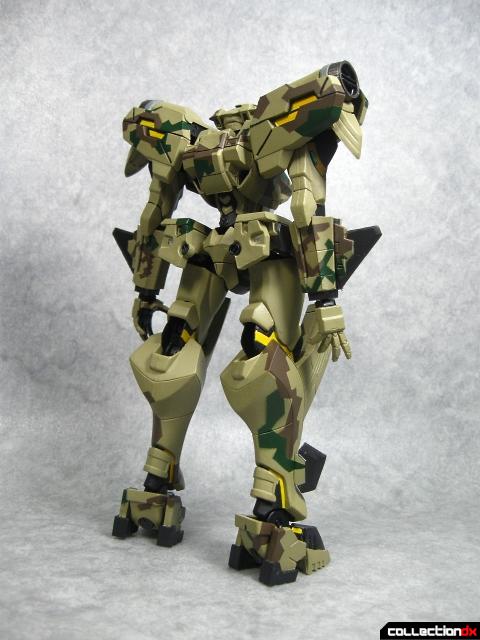 This desert camouflage is quite attractive and works well with the bulky design. As I mentioned before,Volks's take on the F-14 is a substantial feeling PVC action figure that lovingly recreates the TSF right down to its tiny inadequate feet. The Tomcat's tiny footprint can make balancing the figure an exercise in trial and error even before you add its nominal equipment. 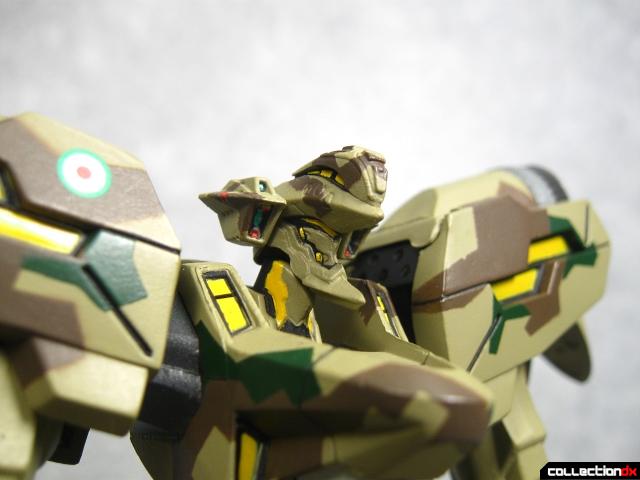 Super Tomcat feature an enhanced sensor package which is represented by the enlarged forehead radome. The American style TSF face remain untouched and is as serve looking as ever with its narrow yellow visor. Paint on the auxiliary sensors in the head's "intakes" a fairly well applied. 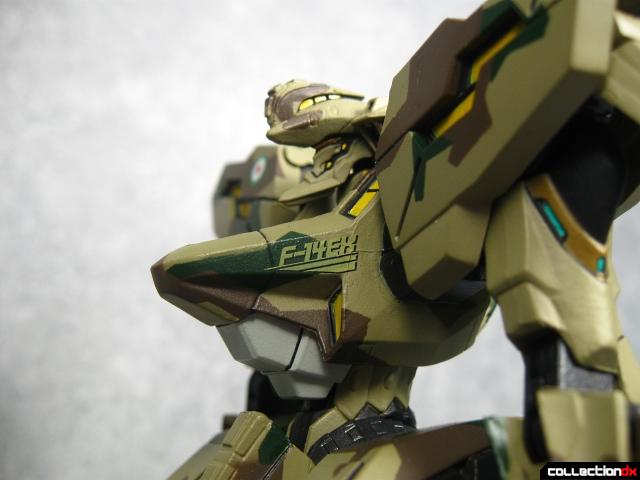 Along the left side of the chest is a crisp tampographed marking that reads "F-14EX." 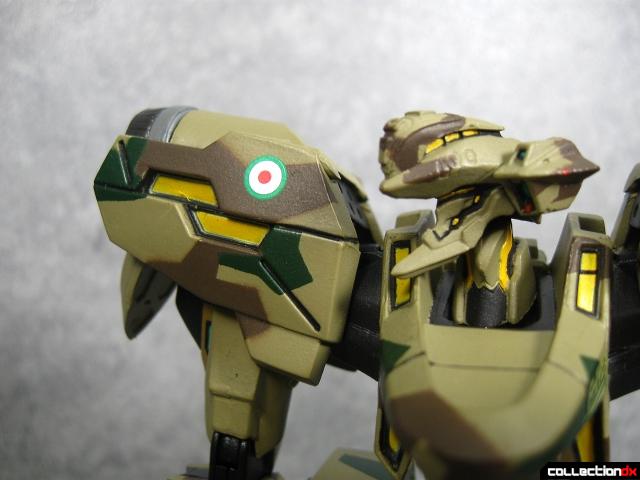 On the right shoulder is the real life roundel used by Iran's air force. 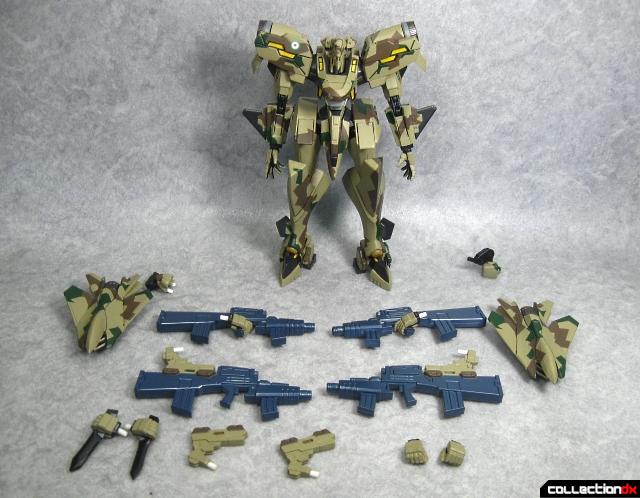 The Super Tomcat comes with almost everything the previous version does but omits the two shoulder mounted missile launchers. This is meant to reflect the in-universe upgrade where the launcher mounts were replaced with extra engines to enhance maneuverability. 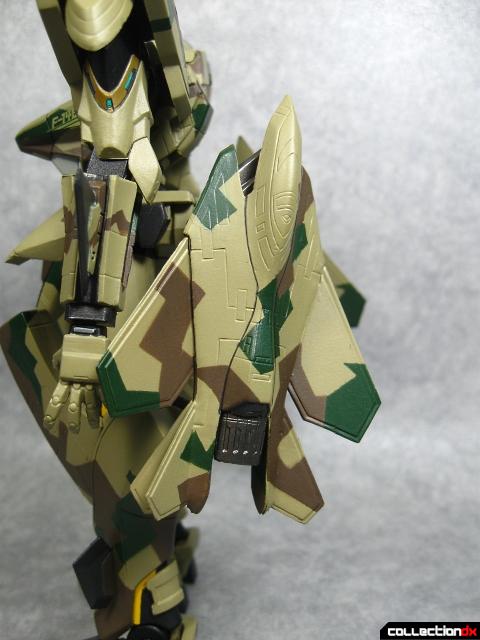 The Tomcat's beefy jump units are painted to match the main body and still feature removable wings that can be swapped around so they angle downwards. When the wings are exchanged the camouflage patterns still match up which is a nice touch. 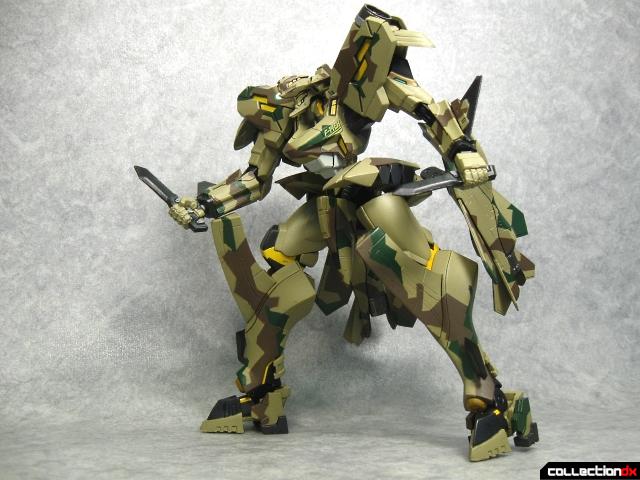 As with the base figure, the Super Tomcat is a competently engineered figure with a good amount of articulation. Some of this is undercut by the meager footprint afforded by its triangular tootsies. The toy can get into a number of dynamic poses but the question is often how long it will remain upright. 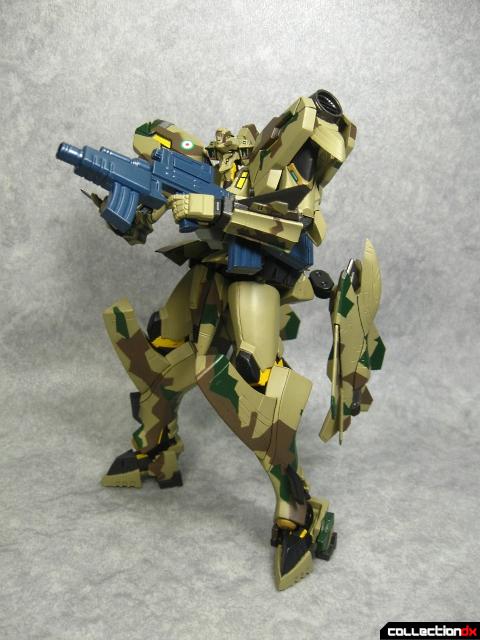 Once the F-14 is put in a stable pose, it exudes a powerful aura which in this case is topped off by an excellent painted exterior. 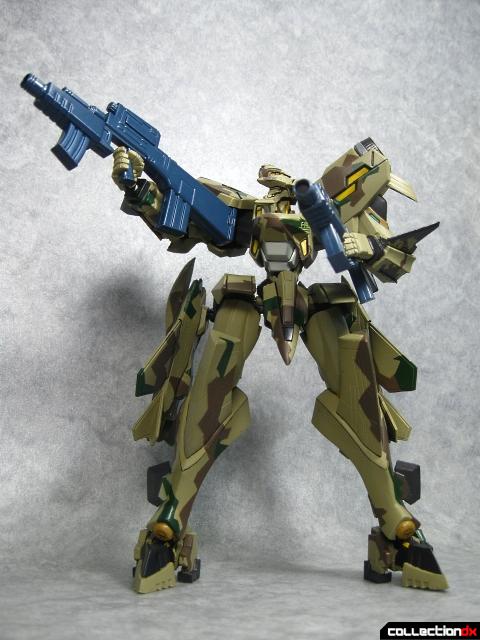 The shiny blue used on its assault cannons create a striking contrast between the weapons and the body of the TSF. 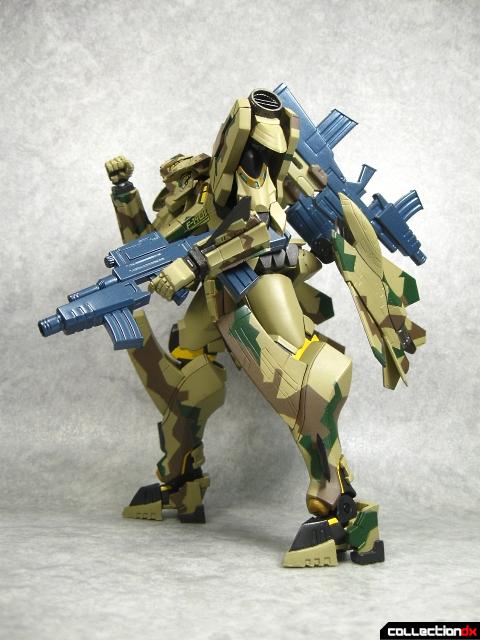 Like the other A3 figures, the Super Tomcat can carry a pair of assault cannons as part of two alternate mount pylons. For whatever reason (because it's Volks) a lot of the pegs were too thick for their holes on this particular figure so I had to file them down so accessories would fit. 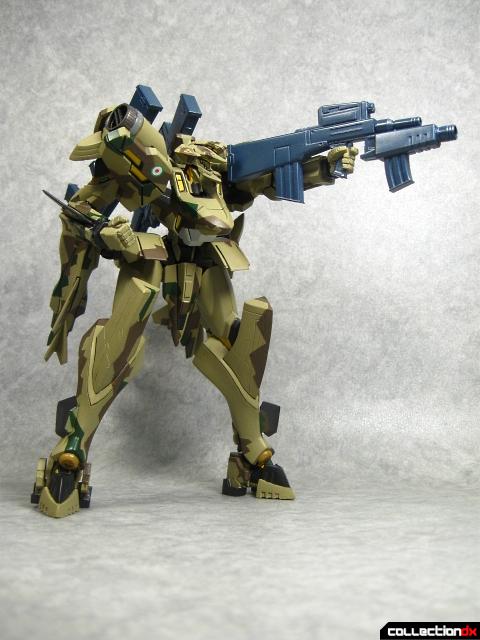 I really like the look of the fully loaded F-14 as it combines the overall aggressive look of TSF's with some extra power and a little bit of grace. 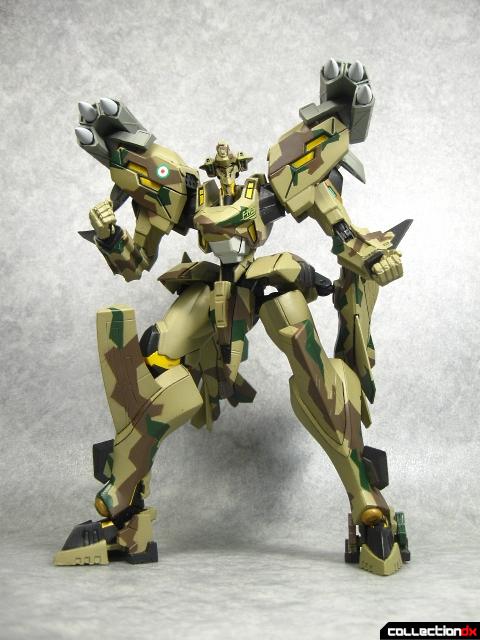 Also if you own one of the American Tomcats, the F-14EX can still use the missile launchers by swapping out the shoulder engines for the weapon mounts. 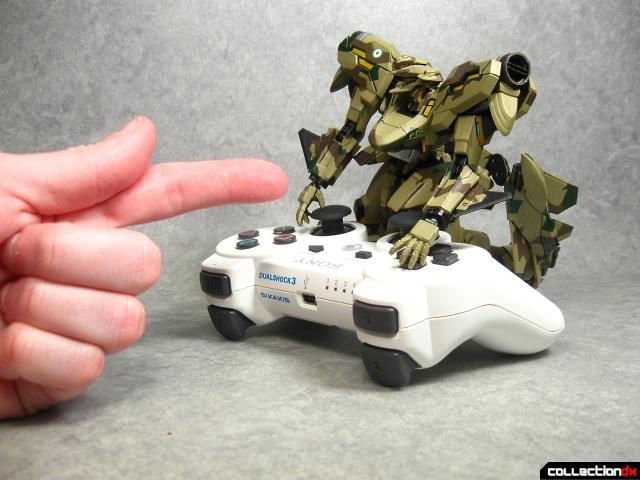 After spending some time with the Super Tomcat, I've found it can even be a little playful.

"I finished my homework! Can I play some Ace Combat now? Please?" 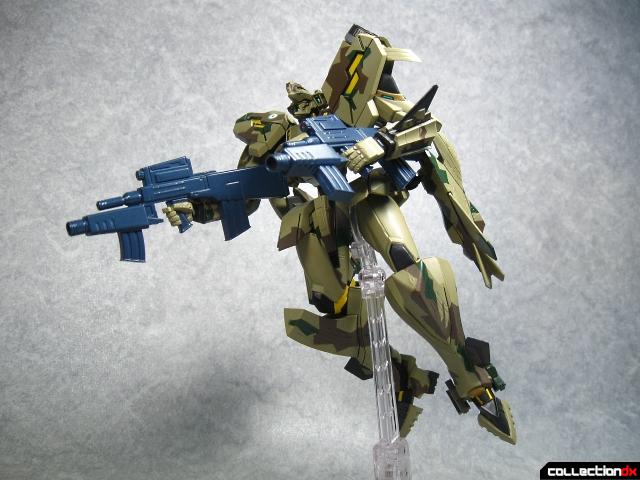 There was never an official display stand offered for the A3 figures (FAFS was so pampered) but a Tamashii Stage Act 5 does a fairly good job of putting on in flight. 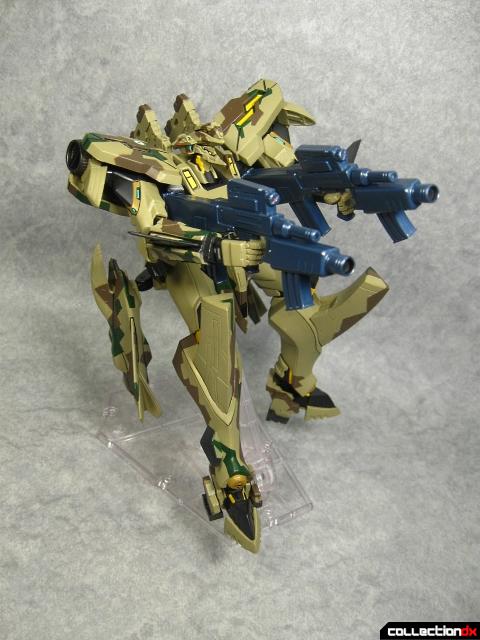 The hovering Tomcat gets a little more dynamic in the air. 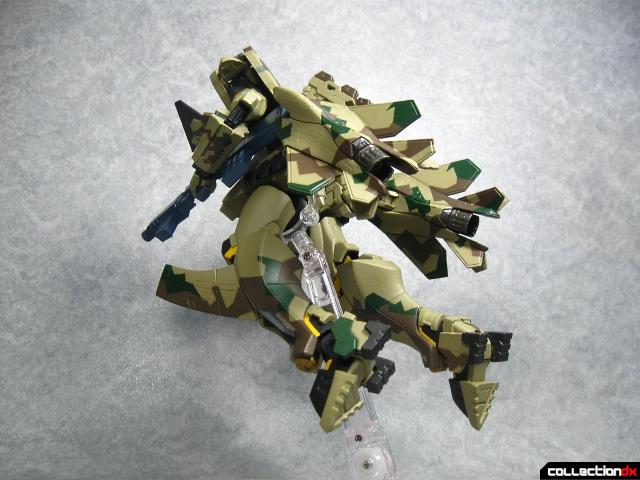 Followers of Attack on Titan may be interested to know that the 3-Dimensional Maneuvering Gear was inspired by the jump units seen on Tactical Surface Fighters as Hajime Isayama is a huge fan of Muv-Luv Alternative. Elaborate hip thingies are truly the only way to travel. 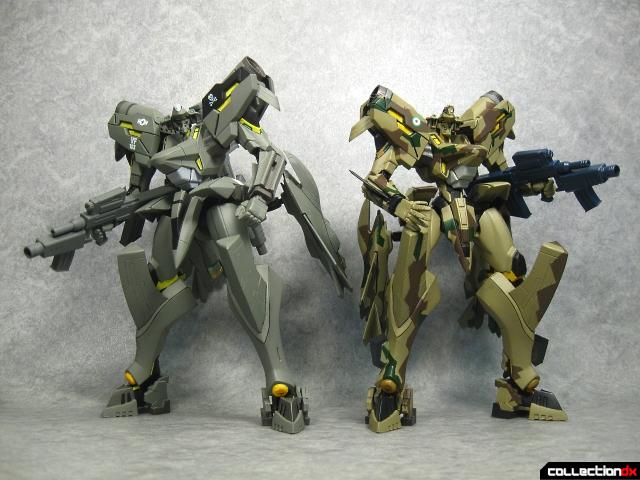 Here is the Iranian Super Tomcat with its American forebear. The way these TSF's emulate the real life paint schemes of their namesakes always adds a touch of authenticity as airplanes reborn as robots. 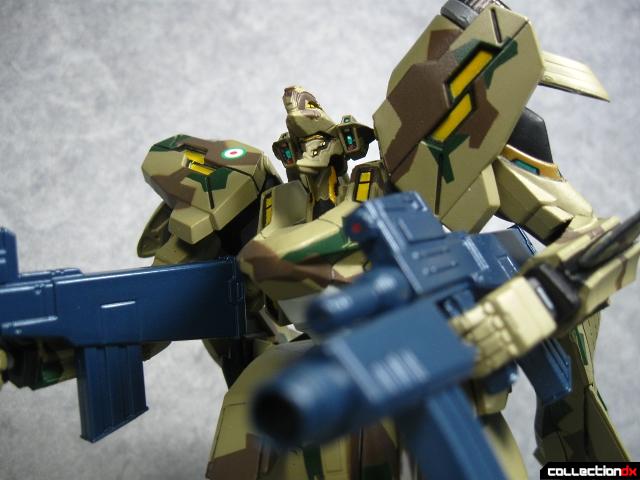 The Volks F-14EX Super Tomcat takes a good toy and gives it a fresh coat of paint in a quite literal sense. Among all the A3 figures, the Tomcats are some of the most plentiful on the aftermarket with their prices getting lower and lower as time goes on. This particular toy was purchased for a mere 980 yen (roughly ten dollars) on Amiami's used items section. I have come to learn that Japan's idea of a used figure can still be near mint as the toy was still complete in box with the inner tray sealed. They had about ten of these for sale which makes me wonder if all the shops are simply trying to clear out these old Volks figures. For that price the Super Tomcat with its good number of accessories and striking colors make it a good gateway purchase for Muv-Luv fans curious about the A3 toys. Like the standard F-14, it's a bit of a fussy prima donna that works best left in a stable pose or placed on a stand. The Tomcat was my first A3 figure and while I have acquired many more since then, I still have a soft spot for these guys. There are better figures in the line but these cats still represent a competent effort from Volks.

9 comments posted
Don't get too jealous, most

Don't get too jealous, most of the FAF stands are terrible.

You need to get the Mindseeker now to round out the Tomcat trio.

Technically it's a quartet because there is another Jolly Rogers Tomcat with different shoulder markings to denote it's not the leader.

I can't blame Volks (this time) because it's in the source material.

No, I mean, releasing two separate versions of almost exactly the same toy while there would be a much easier solution. (And on that note, only including extra marking options with the limited releases)

And thought you typed Muv-Luv curious.

The camo looks cool, would like to see digital camo would look especially cool on mechs / robots. Nice review.

Don't worry, Muv-Luv curious is definitely a thing. Veef can tell you all about that too.

My Muv-Luv curiosity is not yet satisfied.

I think that everyone who starts playing Muv-Luv does so because they are Muv-Luv curious.