The Eva units are not your typical mecha. These slick fusions of flesh and metal stem right from the mind of a terminally depressed Ultraman fan that looks he spent too many days watching Ridley Scott films. Beneath their shiny metal skin beats the heart of a barely controlled animal, teetering on the edge of bloodthirsty rage. When the chips are down, we can only turn to... 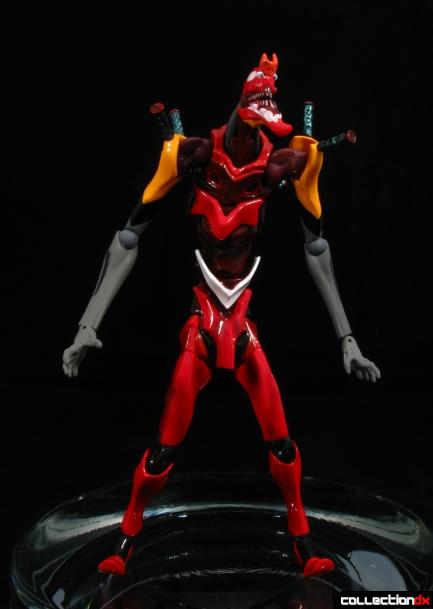 Eva Unit 2 “The Beast” is a great looking figure. If there's one thing sculptor Katsuhisa Yamaguchi consistently does right with the Revoltech line, it's Evangelion. Balancing this figure in a neutral standing pose is a bit difficult, as the feet are permanently bent in a wicked curl. Naturally, this figure starts to come alive once you summon up your inner animal. 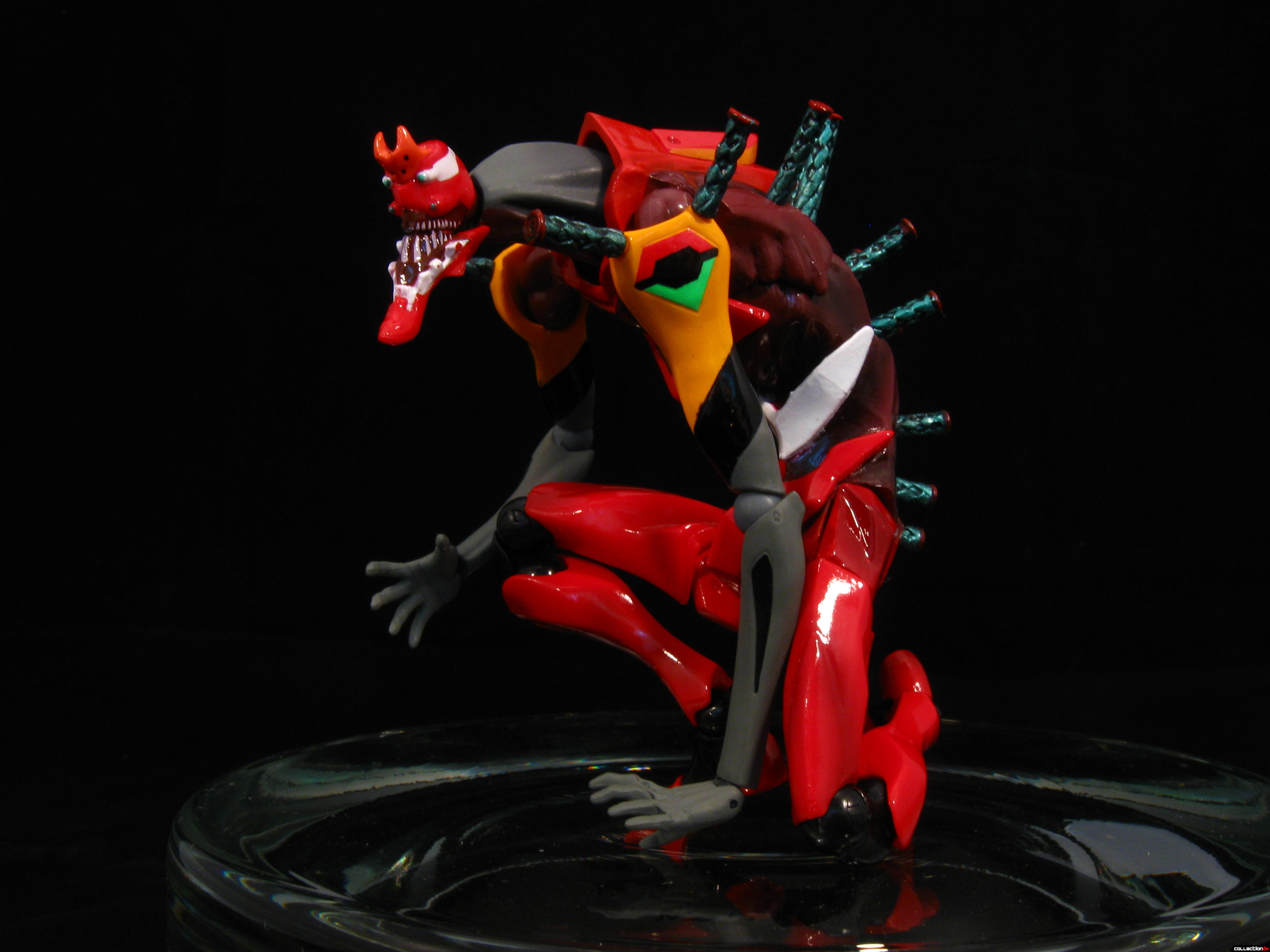 Hunkering down into a feral crouch is very easy to do with The Beast. The torso alone breaks down into three distinct chunks all connected by large, beefy Revoltech joints. The Beast also employs several of the new smaller sized joints around vital areas like the elbows, ankles, and neck. These joints feel much smoother than the big joints. They're almost like those you would find in a Figma, yet they still maintain a good, durable feel. The shoulders and knees use the standard double-joint and allow for a wide range of motion. 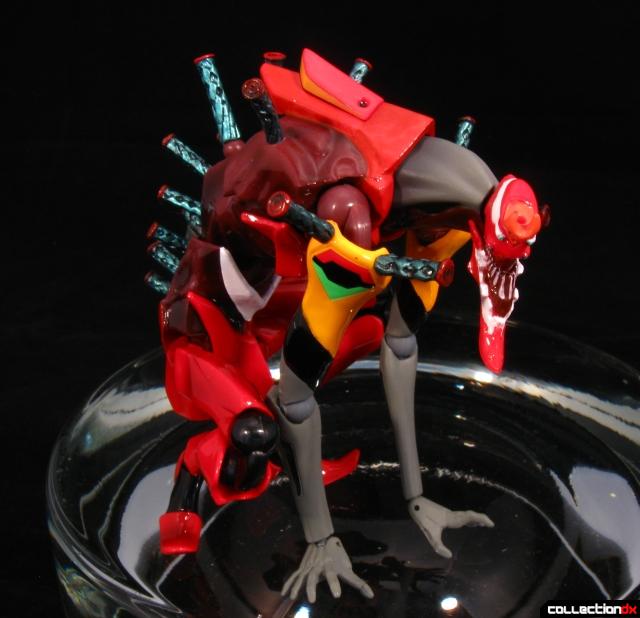 Unlike most Revoltechs, The Beast only comes with one set of hands. This really doesn't bother me, as the included hands are posed in an appropriately sadistic manner, which suits the overall character no matter the stance. I find the toy to be very photogenic. 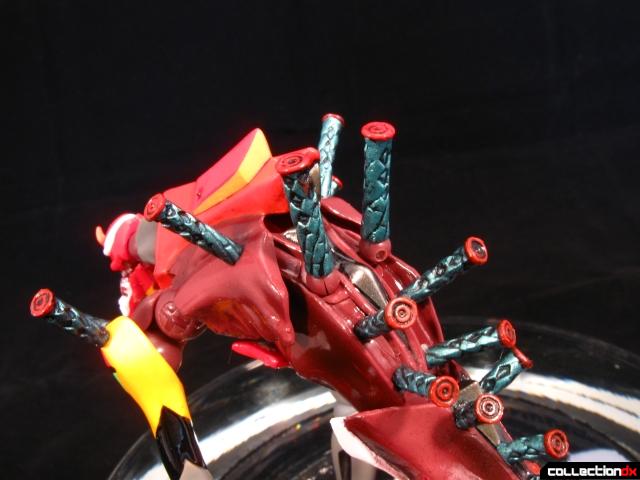 The back of the toy is lined with several unlocked binding points. While they do look like a bunch of Chinese finger-traps, these makeshift spines give the figure a nice alien feel. 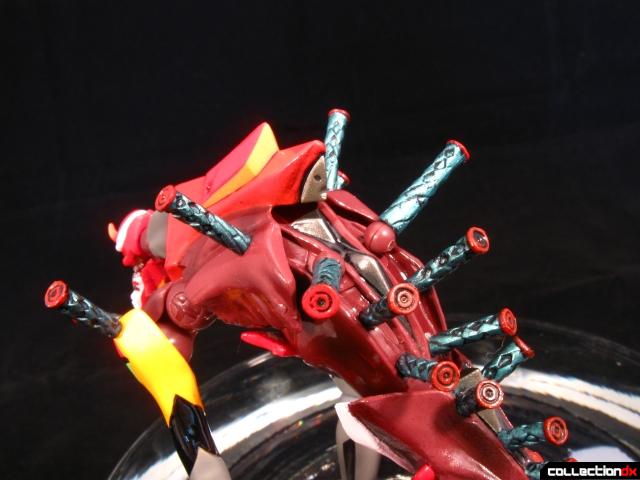 Two of the spines are attached with small Revoltech joints and can both swivel and pivot around for some extra wild style. 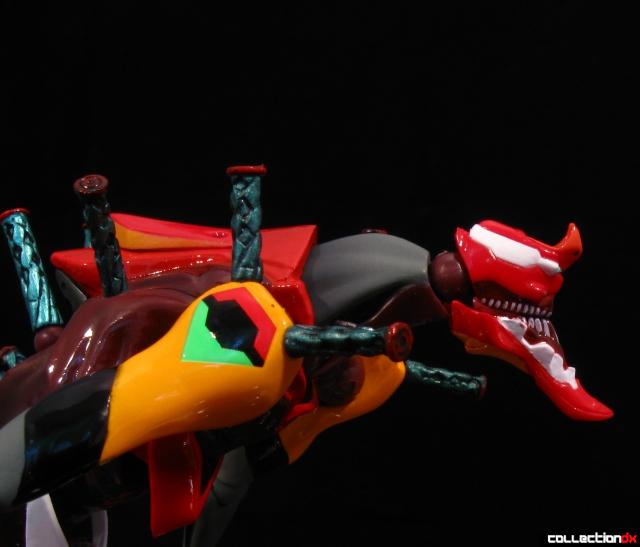 Despite its small size, the head is well sculpted and decently painted. 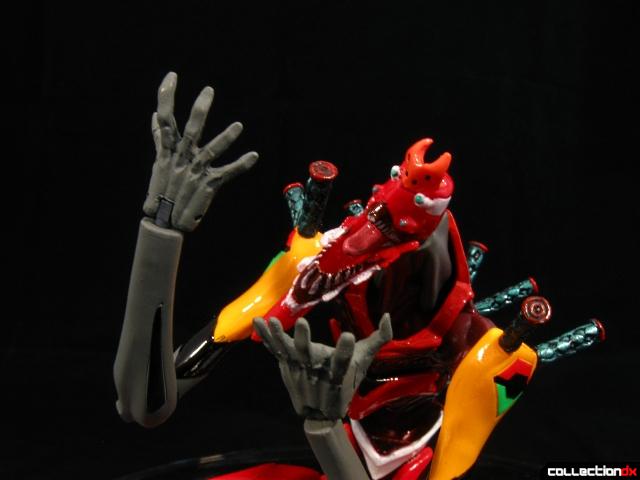 The lower jaw can be swung open to reveal a wicked tongue. 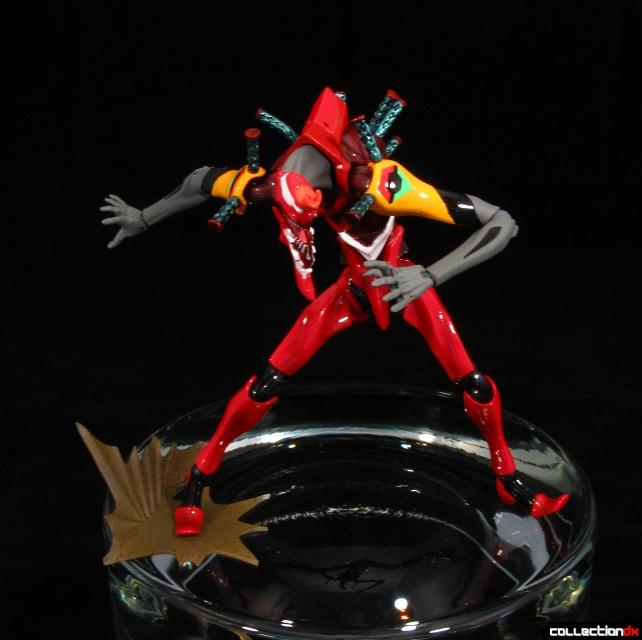 One of the accessories is an effect part for the feet. While it does an adequate job of representing that animated foot stamping effect, the part is molded out of thin plastic and feels quite cheap and nasty. 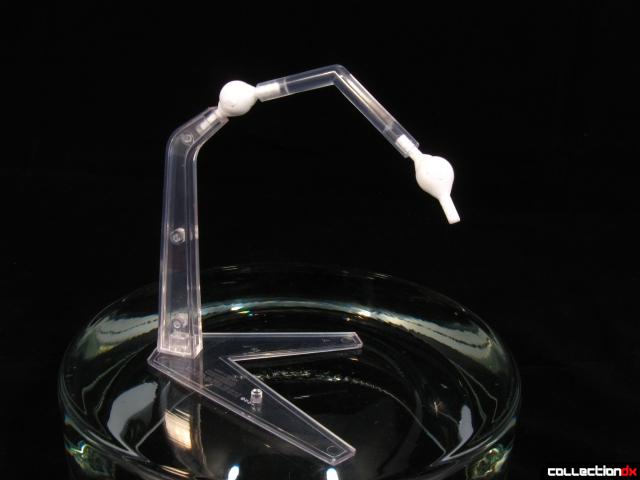 The Beast includes a clear version of the familiar Revoltech stand with two white Revoltech joints, and a new extension piece. 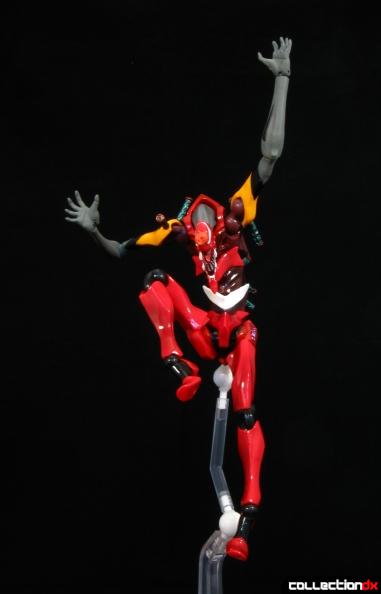 The extension piece is quite effective at giving the figure a lot more air in its jumps. 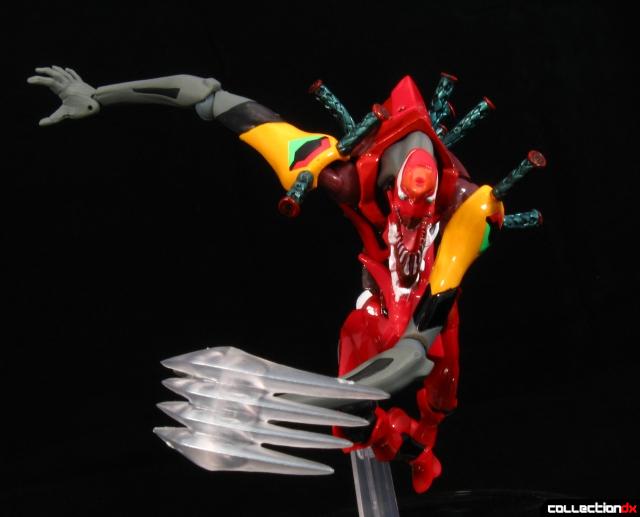 Each hand can be outfitted with a nifty slashing effect. These simply plug over the fingertips. 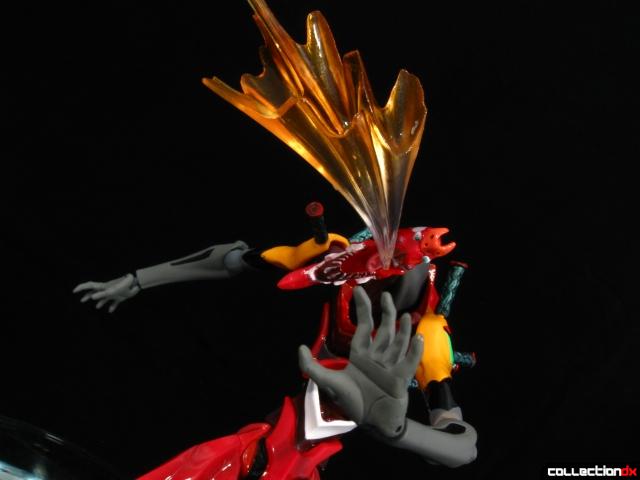 I think The Beast is one of the few figures to come with what I can only describe as "action spit." This pegs into the roof of the toy's mouth. 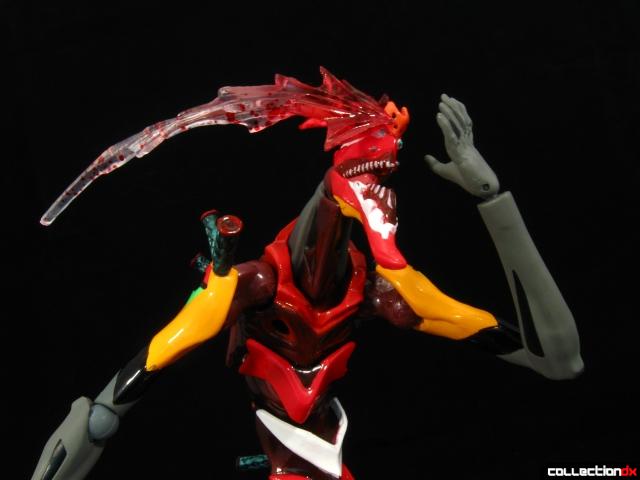 Another of the very kinetic accessories is a bloody trail for when your Beast gets something in its eye. This pegs into the top of the head and is kind of sharp, so handle it with care. 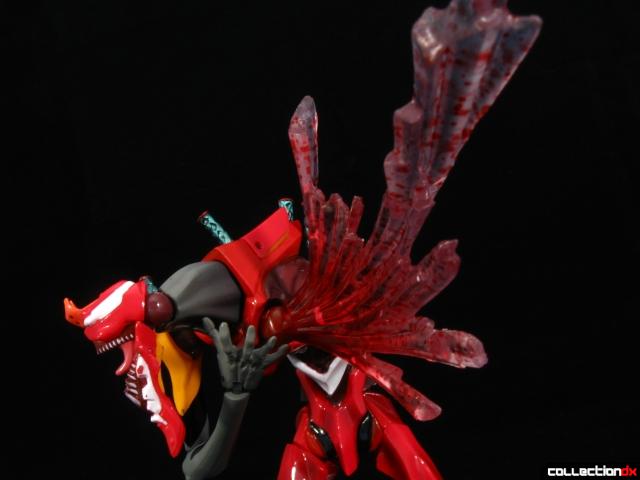 By far the figure's best accessory is the blood spray. It is attached to a standard Revoltech joint, and can be pegged into most of the Beast's major limb sockets. 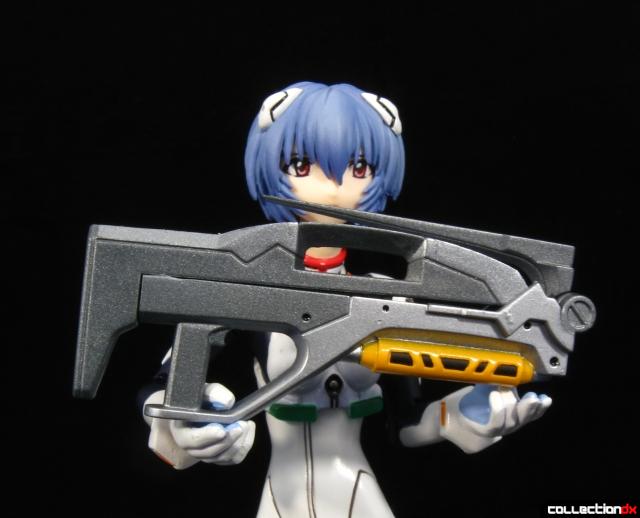 As a bonus item, The Beast comes with a Thunder Spear which is intended for their normal Eva Unit 2 figure. The lovely Rei demonstrates the Spear in its closed configuration. 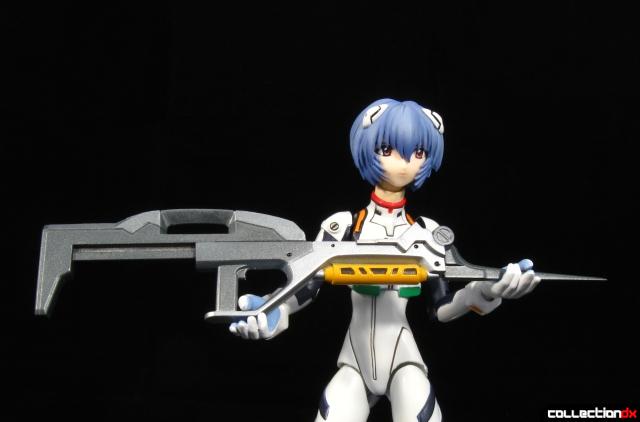 And here it is with stock and spear point extended. Thank you, Rei. 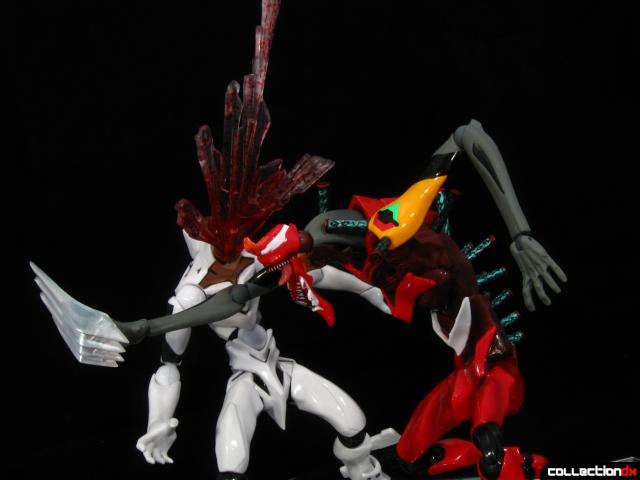 Eva Unit 2 “The Beast” is an excellent Revoltech figure. This is the kind of toy Revoltech was made for as it is suitably bizarre, kinetic, and visceral. It's almost worth getting just for the blood spray part. That is one accessory that keeps on giving.

She appears to be slightly upset.

Someone stole all the pie.

What kind of pie was it? I'm really disappointed in you Veef, this information should've been included in the review.

So that's what happens when Carnage takes over an EVA. Very, very cool.

That blood spatter is going to be very handy for people with the Fist of the North Star Revoltechs. Now you can simulate all sorts of limb-punching-off fun!

Back in one of the Hokuto No Ken Revo reviews, I suggested that they should include "exploded head" accessories with all the Revoltech figures. I guess they read CDX and heard my suggestion! 8D

That said: The "foot stomp" and "claw slash" pieces are really silly-looking. The claw slash looks like it's just supposed to be some kind of energy shield, and the foot stomp is, uh, I don't know what. I see what they're going for but I don't really think it works.

what quote do you think suits the first picture the most ?

Sad, but how can anyone appreciate this figure when the movie hasn't even been released here in the states? When you see the climatic battle scene towards the end of Evangelion 2.0 movie you'd think this figure is much cooler, for the role it played in the final action scene. Instead of the cheesy blood spurts, slashes, and whatevers that are part of this toy... it would of been much cooler to see EVA jumping off A.T. Fields trying to claw at Zeruel as the beast.

I appreciate this figure.

I have order it and im waiting for this to come :P
It;s sad that we have to wait so much to see Evangelion 2.0 in Europe too :(

(Spoiler alert!) That "action spit." part is probably meant to be a piece of an Angel's AT Field, which the EVA rips off with its teeth in the movie.

If only they released some Revoltech Angels...