It comes in a very classy hard cardboard box. Forget cheap flimsy boxes. This was made to hold on to and has incredible graphics. 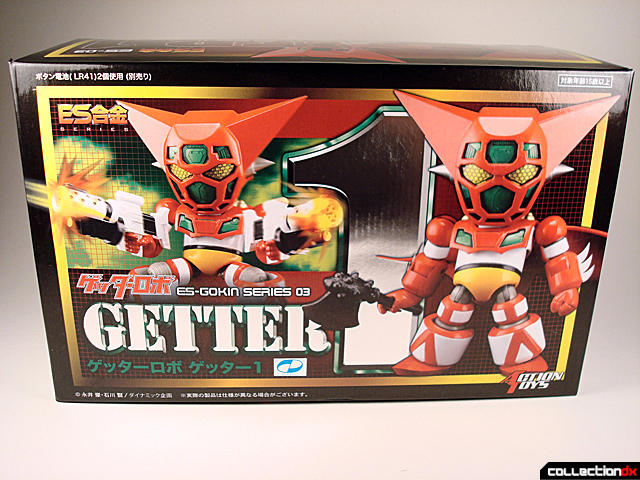 The back has some really nice graphics showing off the figure. 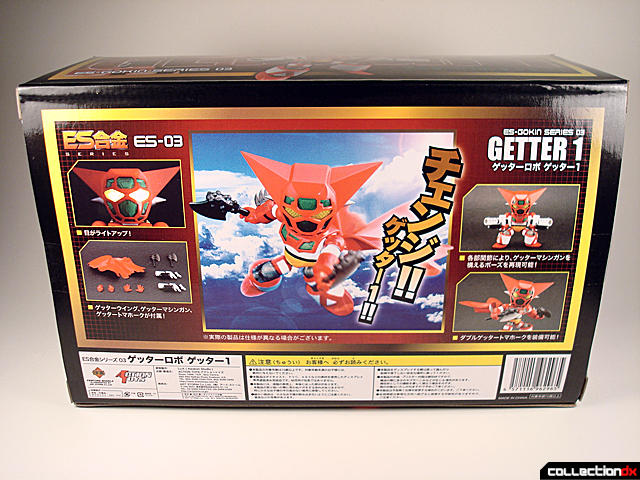 I normally always comment about the lack of Styrofoam, but I honestly haven't flinched much with these releases. The boxes more than make up for it. The figure and accessories make up the top tray which is the now-standard plastic type. Underneath you will find another tray with an adjustable stand and his cape each wrapped in protective plastic baggies. 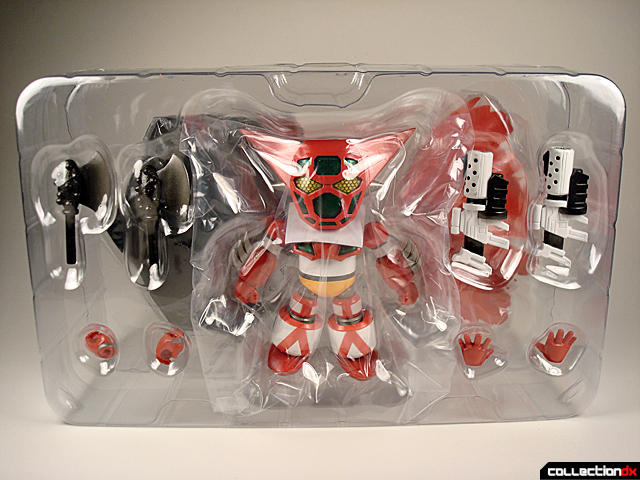 Here is the little guy. He's about 10.5cm tall. I gotta tell you, this figure feels so nice in the hands. The finish on mine is absolutely flawless. It's so glossy, the weight is perfect and it just looks so darn good. They didnt just mold the head in red plastic, they painted it to match the color and gloss of the rest of the figure. Diecast is pleasantly laid out in his legs, chest and torso giving it a good weight. Can you tell I like it? 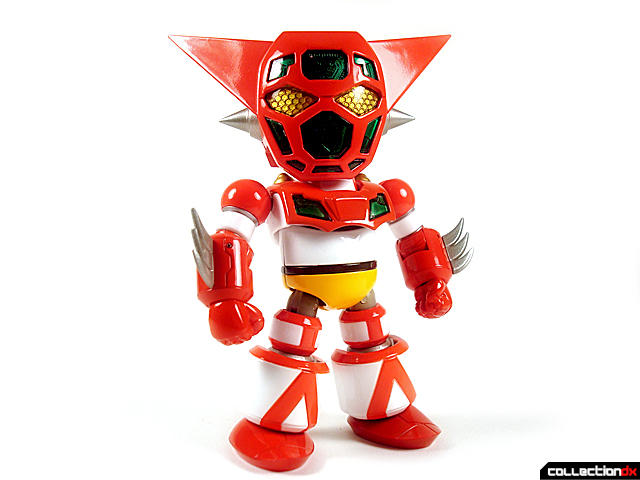 The back also looks good. I love how the ratchets on the legs are visible behind the legs. I love exposed mechanicals on everything. You'll notice the head has a little cover and micro switch. I'll show you guys later what that's about. 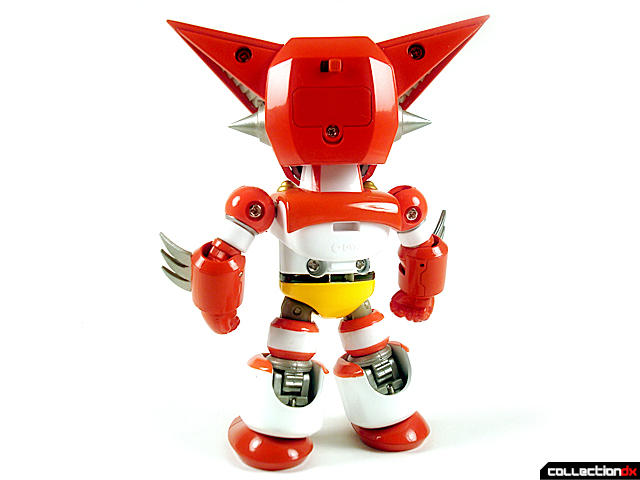 This figure takes well to posing, even more-so than I am capable of showing you. 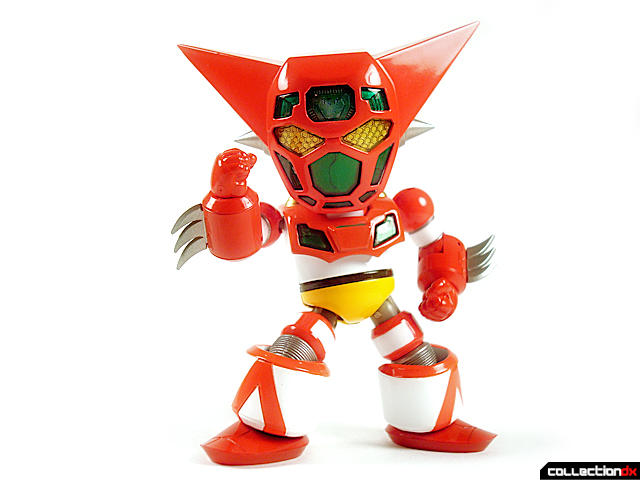 He pulls off a mean crotch thrust since his upper chest and lower waist are two separate pieces. His neck and head are also independently articulated. His arms are very well articulated as are his legs. It's all the same type of articulation you find on bigger chogokin. About the only limited movement it has is the wrists. Although the hands are on ball joints, the wrists only spin around. 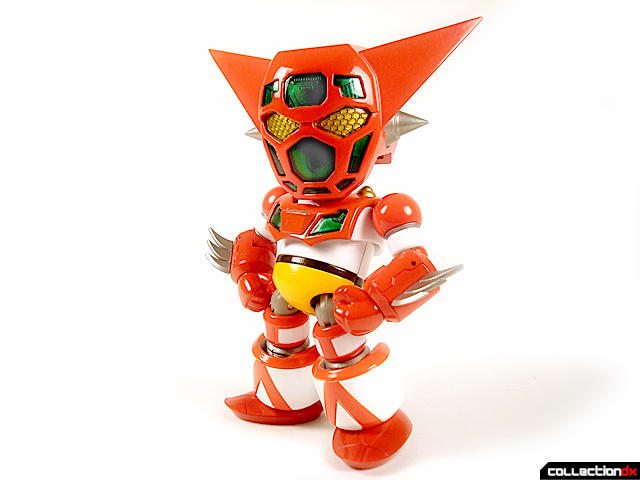 You can also attach an ABS cape to his back. Unfortunately you can only position it in a wind blown position. You'll also notice the use of his alternate open hands. 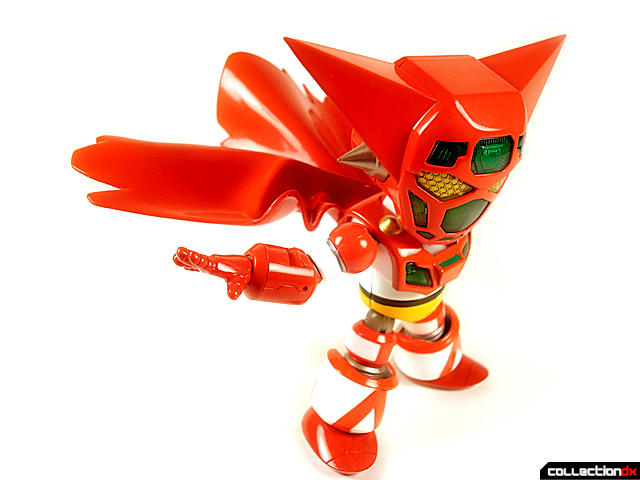 Remember the cover and micro switch behind his head? Well the cover houses 2 watch type batteries (not included) so that you can activate his light up eyes. What's great is that when they are off, all you see is a honeycomb pattern that doesn't give the impression that it has a light feature. Very nice. Shown here is his squatting pose. 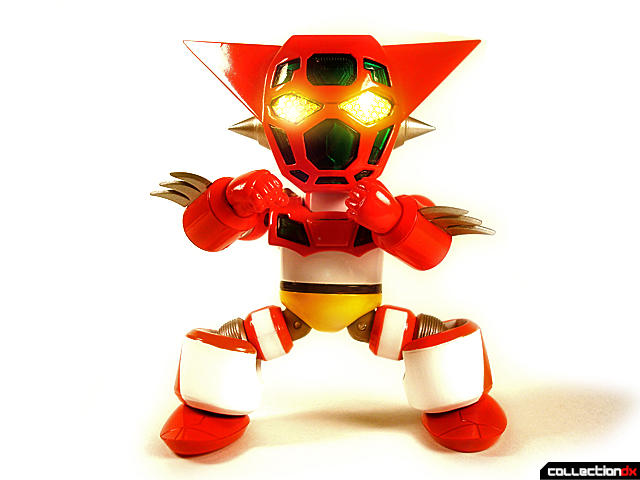 He comes with his pair of PVC axes which fit pretty firmly into his hands. 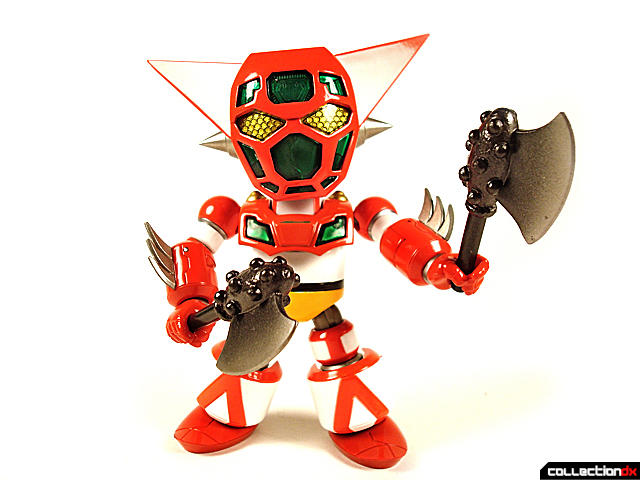 He's also got a pair of white PVC guns which I had a real hard time getting into his hands. I kind of gave up because I was trying harder than I should to get them in and when I really try, that usually ends up with me breaking something. I did notice the weight of the guns would make the elbows swivel easy but it all depends how you position the arms. He is shown here with his alternate gun type hands. 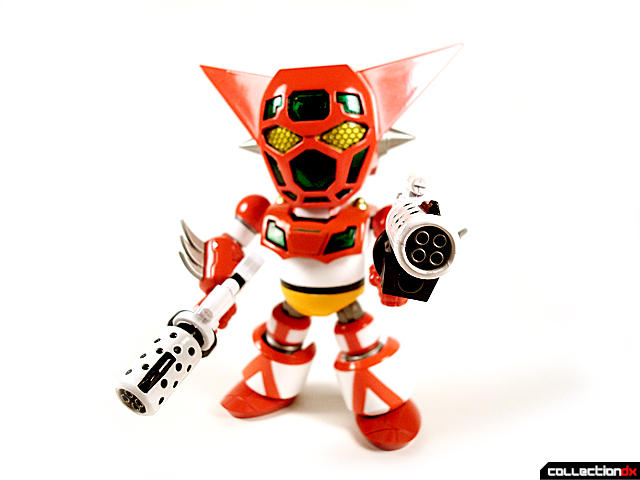 His last bit of included accessories is an adjustable stand so it's up to you how you use it. Whether its for standard poses or flight poses. I've no use for stands, but it's always good when one is included should you want to get creative. 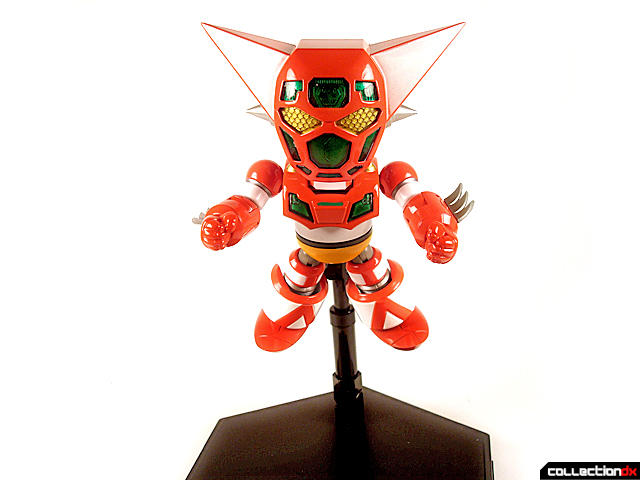 So that about wraps it up. Only downsides I found were the lack of included batteries (which might be a good thing in the long run), Tight fitting weapons and limited wrist movement. Obviously I'm nitpicking. I am not even a big Getter fan, but I really dug this release. SD type stuff is not for everyone, so the whole baby look may turn some people off. It's a very nicely done figure, its relatively affordable and it looks good. The best news is that this is the first of three Getter releases. I'm hooked. 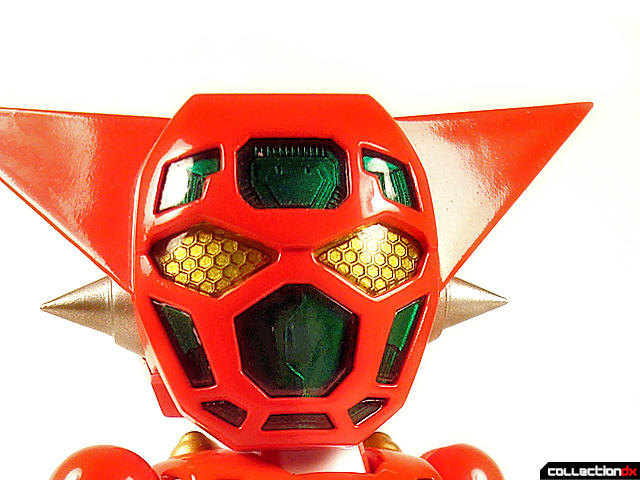