It’s a war between the kingdoms with quartz and clunky sword wielding mecha!

The series “Broken Blade” is unknown to me when compared to Gundam and Armored Core. As far as I know, Broken Blade is a manga (turned OAV movie series) set in a faraway land where sorcery meets science when people have control over quartz and pilot centuries old (yet highly advanced) forms of mecha called Golems in a traditional war-between-kingdoms setting. The Eltemus is one of Broken Blade’s earliest mecha designs belonging to the Athens Commonwealth which declared war against the kingdom of Krisna. 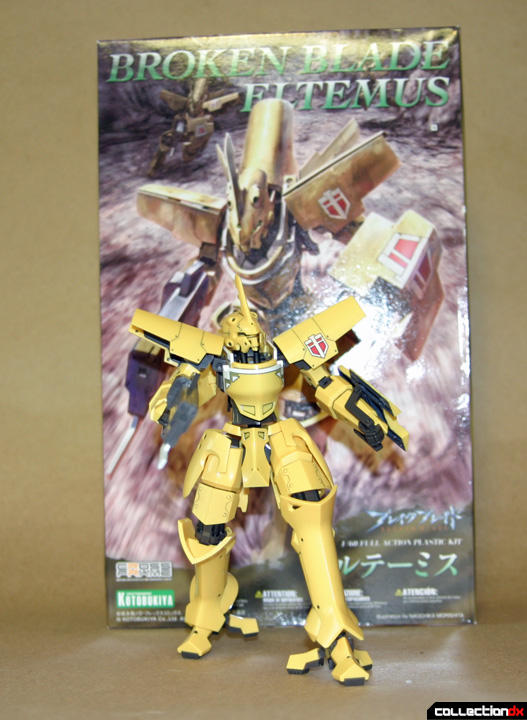 Model kits (the universal tie-in for all things mecha) for Broken Blade are being created by the team of Kotobukiya, famous for their Armored Core and Super Robot Wars: Original Generation lines. From a production standpoint, the Broken Blade series is being produced using Kotobukiya’s “Cross Frame” format, a series of model kits which use base skeletal frames with attachment points designed to mount different varieties of armor and create distinguishable characters from a stock base. While the process does make the model easier to build, it gives Kotobukiya the standard for more models to be designed and released that much more quickly. The drawback to this format is fragility. Like the Fafnir, the final product of the Eltemus feels a little brittle with some plates prone to falling off as they are unintentionally designed to be removable while those that are designed to be removed come off at a moment’s notice. 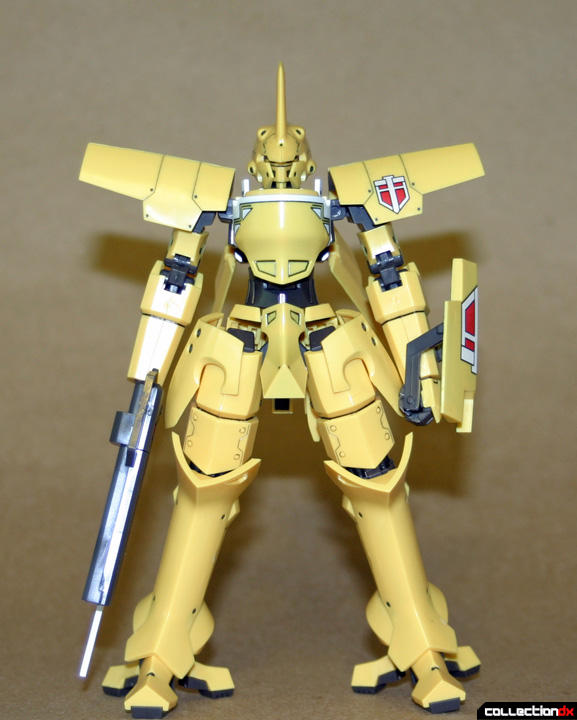 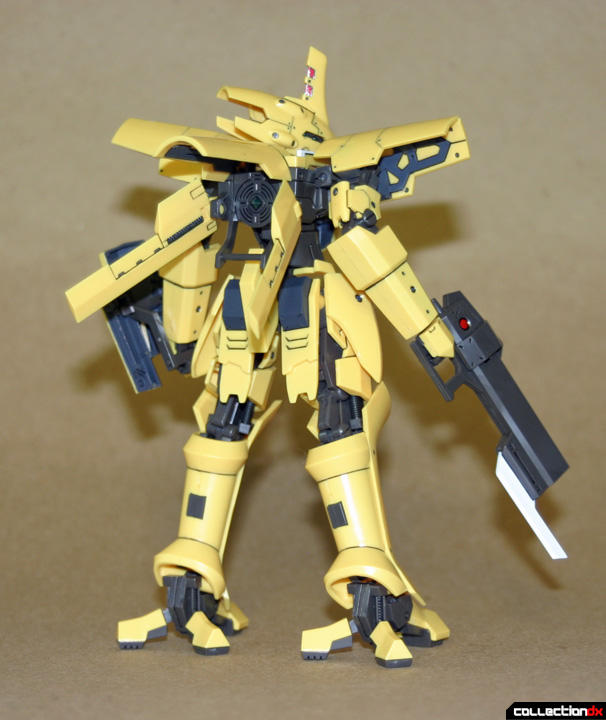 From a quality standpoint, Kotobukiya’s plastic has come a long way. Where it once felt tacky and unrefined, over the years the quality has steadily improved. Edges are sharply molded, but not as they were in the past and the plastic has a semi-polished feel. One of Kotobukiya’s standards that continue with the Eltemus is the limited pre-painted sections such as the Eltemus’ face and some points that would naturally be left to do-it-yourself work on another model such as these gray painted areas on the back skirts and neck base on the chest. As it is with other Kotobukiya kits, these head-start parts usually need some minor touch ups on the builder’s part anyway in order to improve the finished product. The Eltemus has a unique spin in its simplicity with the Athens Commonwealth crest pre-stamped on its shoulder armor and shield rather than being included as an applicable decal. 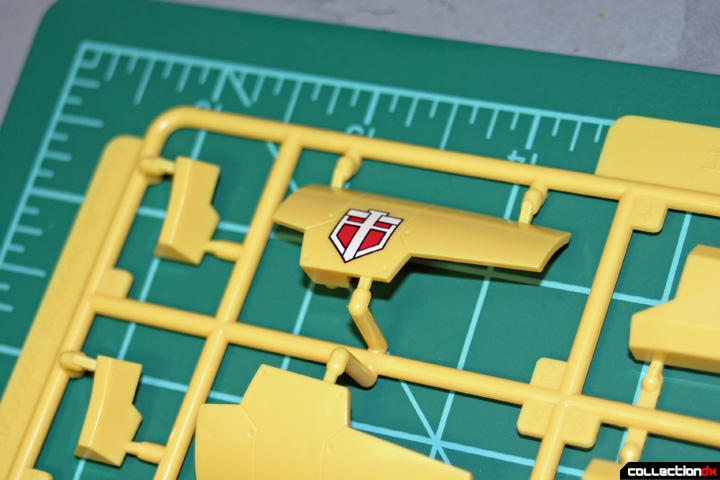 Like almost every mecha model kits, the Eltemus is purely snap-together and glue is not necessarily required. I found it necessary in constructing the hands because of inconsistent attachment grooves for fitting the fingers into the palm. These are just few of many areas of the model that would be considered for glue, but for the sake of snap-together safety and accidental assembling without proper pre-assembly, glue can be avoided in the all together.

The kit is pre-molded in its final colors of bright yellow and dark gray with room for improvement with paint. The collar area, molded in yellow plastic, needs to be painted white while the frame-work molded on the underbelly of the shoulder armor, shield, and back plating need to be painted gray. Out of the box, the Eltemus suffers from what I want to call “Yellow Plastic Syndrome” where the single molded color stands out too much. With a little paint and some ink from a Gundam-marker and a Rapidoliner pen, the plastic can be toned down tremendously. 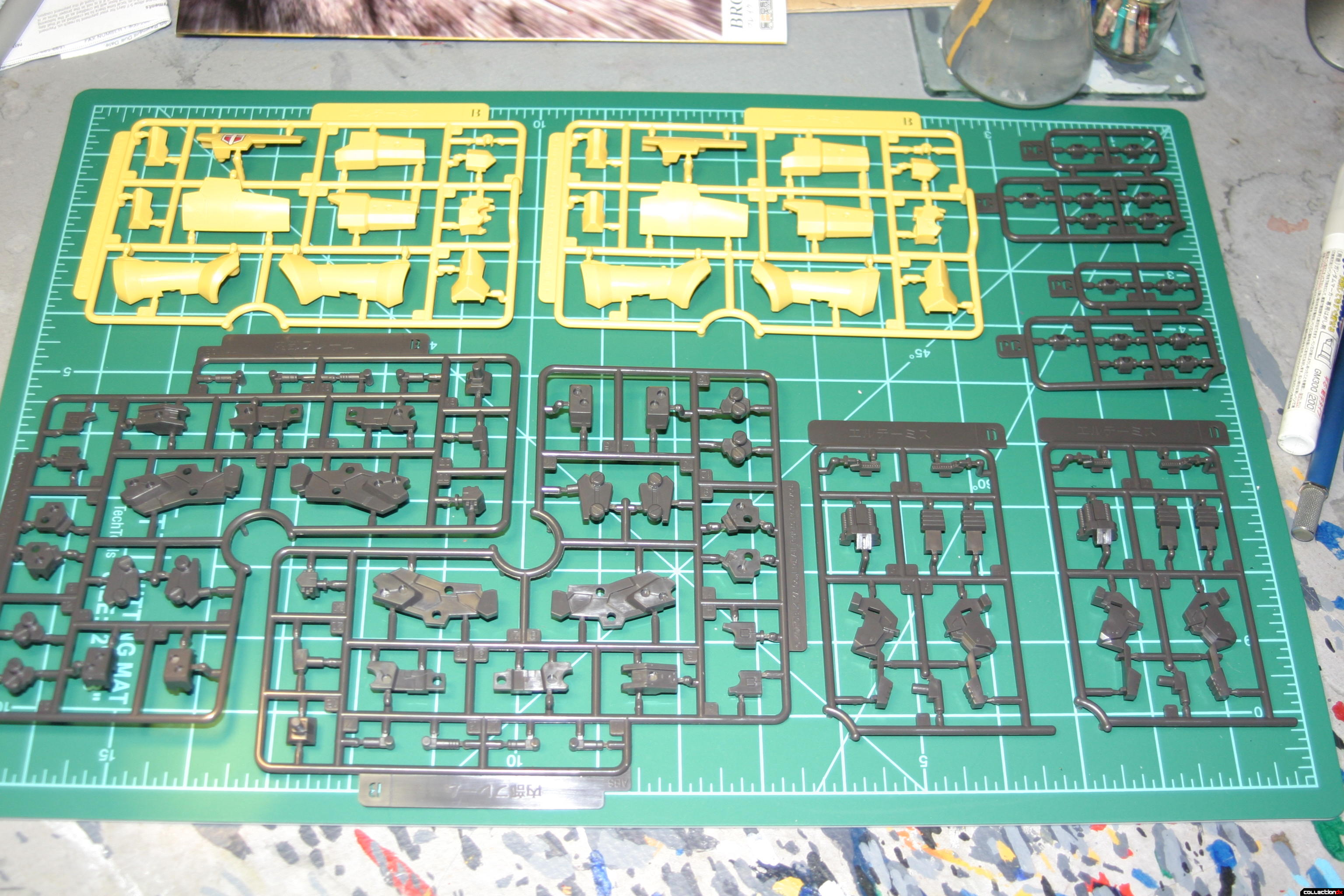 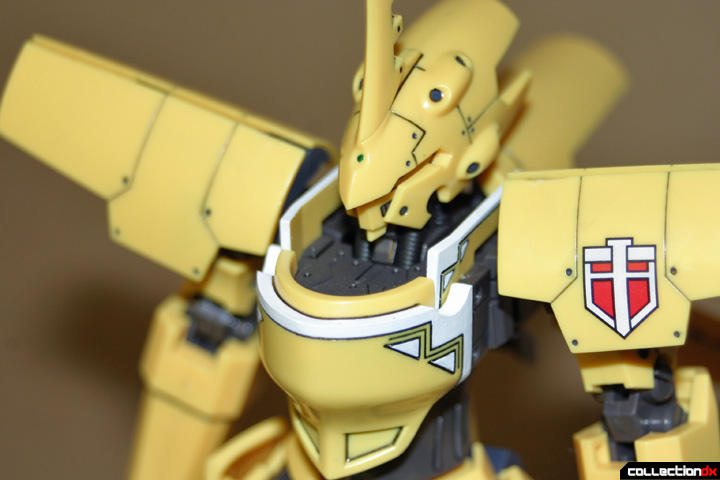 Out of the box building of the Eltemus can be accomplished quickly, with the extra time spent to paint and detail the model really taking up the extra time. Construction of the Eltemus combines simplicity with Kotobukiya’s modular-mirrored format. Duplicate runners make up the left and right limbs while the orientation is set by reversing the arrangement. After hours of watching paint dry, assembling the Eltemus can take only minutes. Fully assembled, the 1/60 scale model measures roughly over the knee of a 1/60 scale Gundam and weighs very little by comparison. 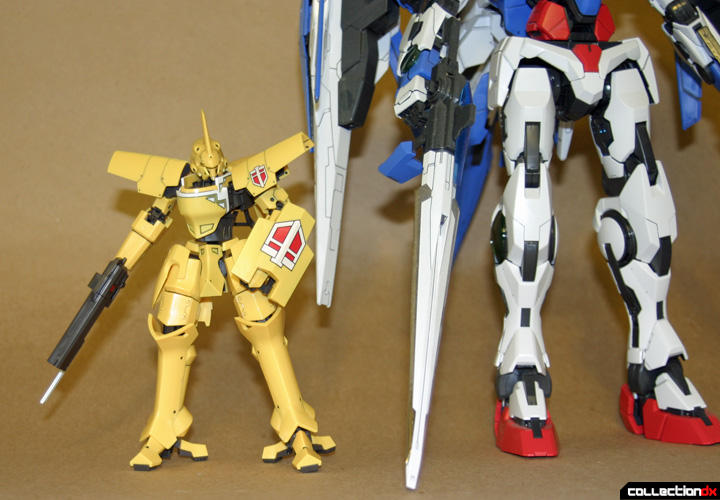 As far as articulation is concerned, the Eltemus is confined by its armor. The skirts on the back of the legs need to be removed and adjusted (shifting the placement of the armor plates from one peg port to the next) will extend the knee’s range of motion, but this is severely hampered by the fact that the legs cannot rotate very far at the hip. The rest of the body does not require part swapping just to turn around, but there are still limitations. The arms suffer from a severe design flaw where the armor on the bicep and forearm add too much bulk that compromises the elbow’s turning range. If the forearm rotates too far, it can pull the elbow from the bicep socket. This is a major disappointment considering the elbow is designed to have a complete 180 degree rotation from its chain-link design, but the size of the armor limits it to just under 90 degrees. This same can be said for the knees as well. 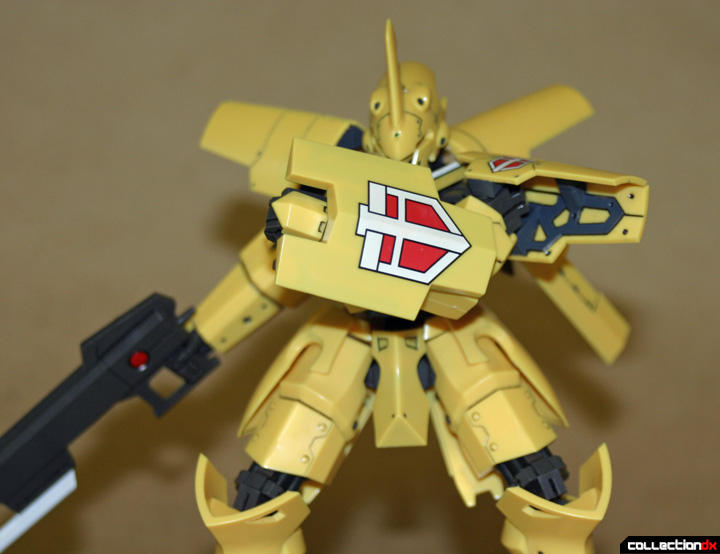 While trying to defend this model compared to its predecessors, I find myself torn by the unforeseen revelation of parts breaking down. As I was adjusting the Eltemus’ hips for its review, I noticed the legs start to swing freely from their sockets. It was then I noticed that the hip sockets in both legs had split. Truly unexpected, this problem seems to be just one more condemning feature in the Broken Blade model kit saga. Whether this is just due to the strain placed on articulated parts or just a random occurrence of mine (or both), it really degrades the Eltemus’ overall value. Nothing hurts more than something you put together falling apart on its own. 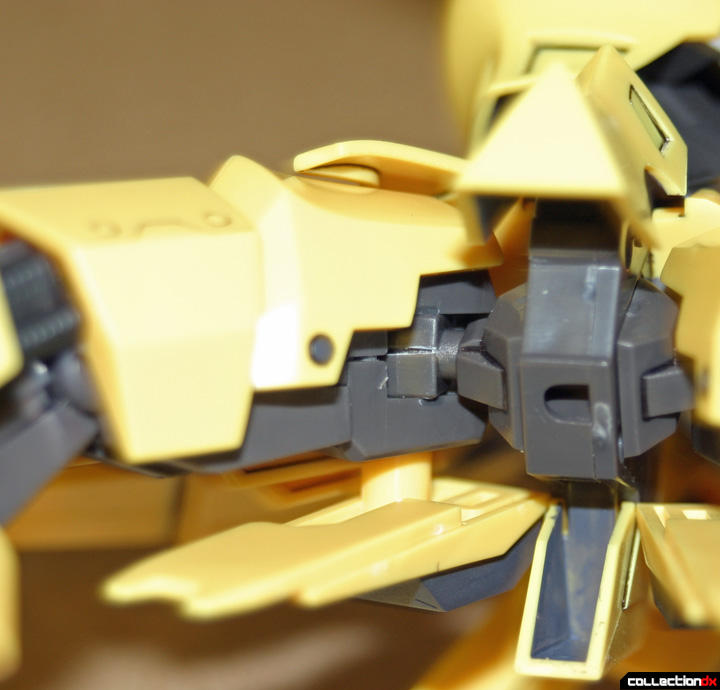 Despite being based in swords and sorcery, the Eltemus lacks the traditional arsenal of melee weapon accessories. Instead, the Eltemus only comes with a bayonet mounted rifle and shield. Being restricted to just two items held simultaneously, the Eltemus does not come with any alternate hands which makes the completed Eltemus a very self-contained display item. While the lack of alternate parts and weapons is mildly disappointing, it only means the Eltemus does not take up too much shelf space with piles of unused weapons and parts, something Gundam models are most notorious for. 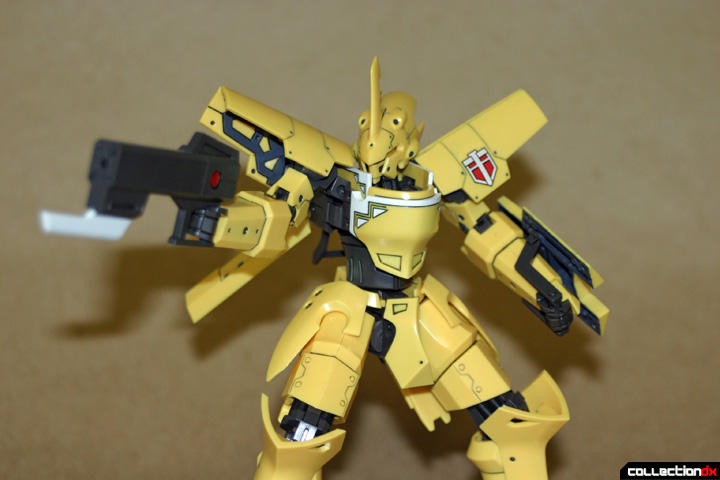 Overall, the Eltemus is a change of pace for me or anybody that is more accustomed to something a little heavier, be it a Kotobukiya or Bandai. While the Cross-Frame platform does give Kotobukiya the latitude to produce more designs much quicker than in the traditional sense, it makes the model feel less iconic and more of an addition in generic rank building exercises. Unfortunately, with its frail disposition and structural weaknesses, the Eltemus will make people think twice before building something by Kotobukiya.

Building the Eltemus, I took my standard route and used what I know. For paints I relied on Testors Model Master Acryl: Engine Gray, Guard’s Red, Aircraft Interior Black, Dark Green Pearl, and Flat White applied with detailing brushes and thinning solution for a smoother coat. For detailing I used the standard black GM-01 fine-tipped Gundammarker and for the more pronounced panel lines I used a .25 tipped Rapidoliner pen to fill in the vent lines and clean the edges of where I painted. 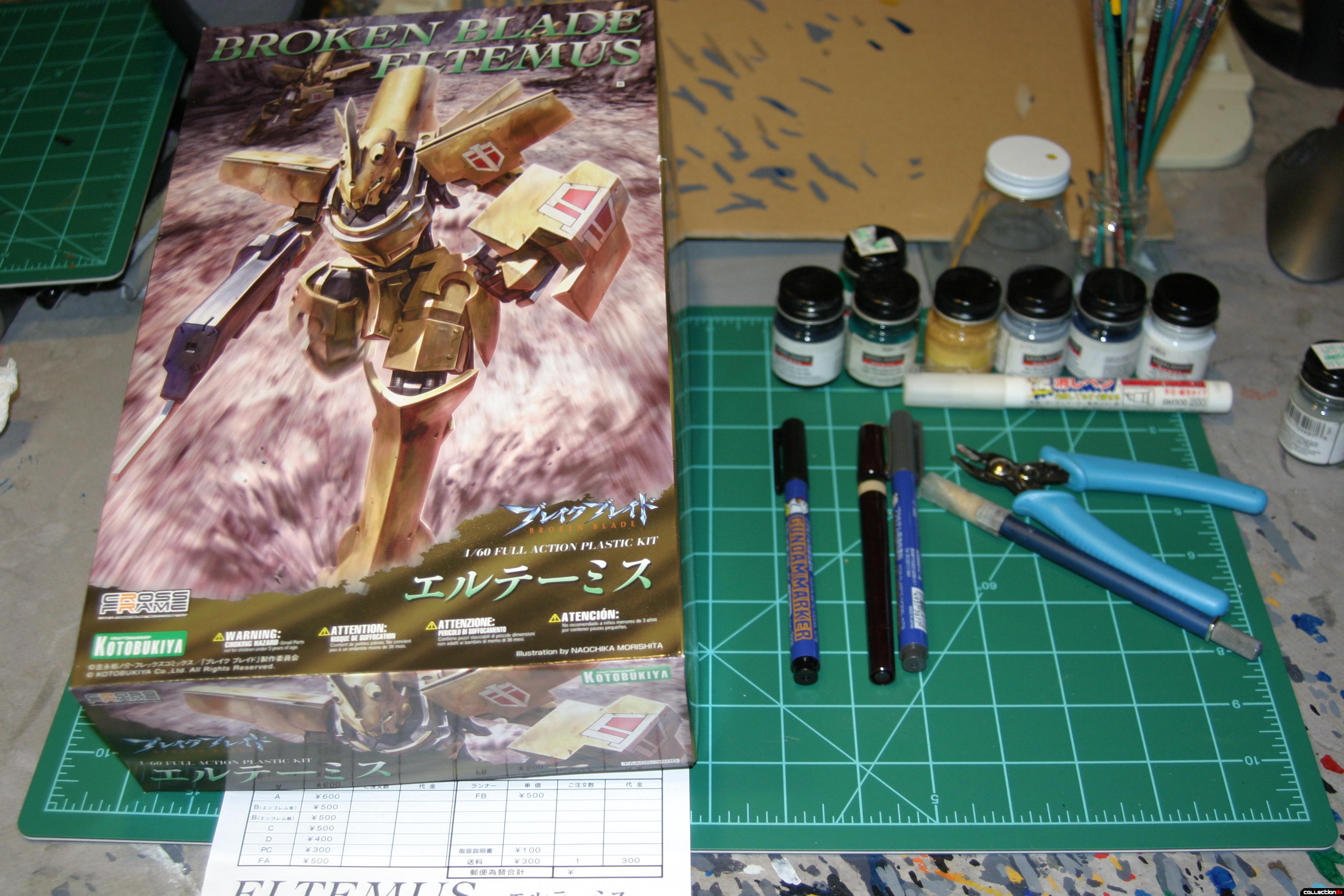 The mecha design of the Eltmeus robot is strikingly similar to the YF-19 Valkyries from Macross Plus & 7 respectively. Did Kawamori design these robots in the manga, or was it all Yoshinaga?

As far as I could find, it was Yoshinaga only and there was nothing about Shoji Kawamori (the Valkyrie designer) in either the manga or the OAV credits.

Although I know nothing about this series or mecha this is a very cool robot! Thanks for the review. I think I might buy this one because it looks great!