What's hot pink, has four wheels and causes lot's of commotion? No, it's not my dream car (or is it?) It's Autobot Arcee. Hasbro has decided to provide Arcee fans with a figure that actually has a futuristic vehicle mode. While some fans still lust for a G1 faithful version, this will have to do for now unless you want to go the third party route.

Arcee is a Toys R Us exclusive, or better yet, "elusive" since she seems to be very hard to come across. She comes in vehicle mode straight from the package so let's start there. The wings are removable if you find it too obnoxious. The narrow track of the wheels almost makes it look like its hovering since the wheels are, for the most part, unseen.

The back of the vehicle has translucent light blue taillights which when pulled out reveal that they are actually her swords in storage. The exposed hands and gap between the quarter panels may be a turn-off for some. 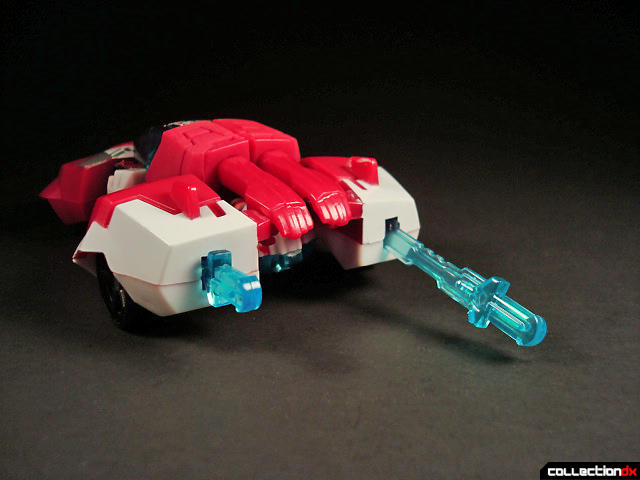 Her transformation is rather simple and like most Transformers, fun. When transformation is complete, you get a pretty darn screen accurate Arcee with wings. I know of two versions of TRU Exclusive Arcee. One has glossy plastic and the other has a matte finish like the Takara version. Factory mix up? Revision? I don't know. 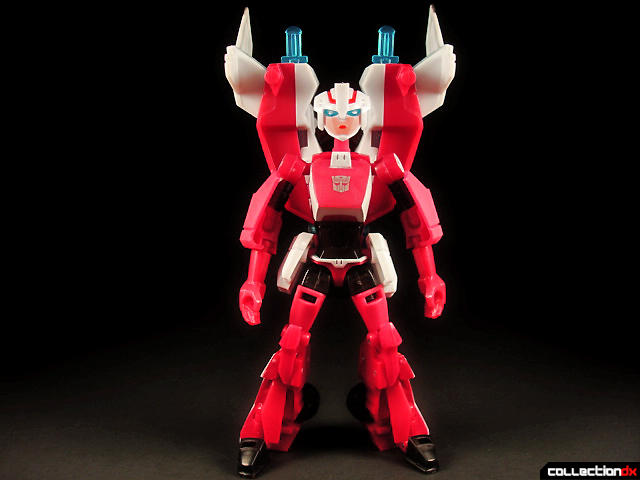 While the backpack is slightly bigger than its onscreen counterpart, it is clean and well designed without upsetting her balance at all, I pose her and she happily stands with no fuss. If the wings are a bit too much for you, they can be removed. 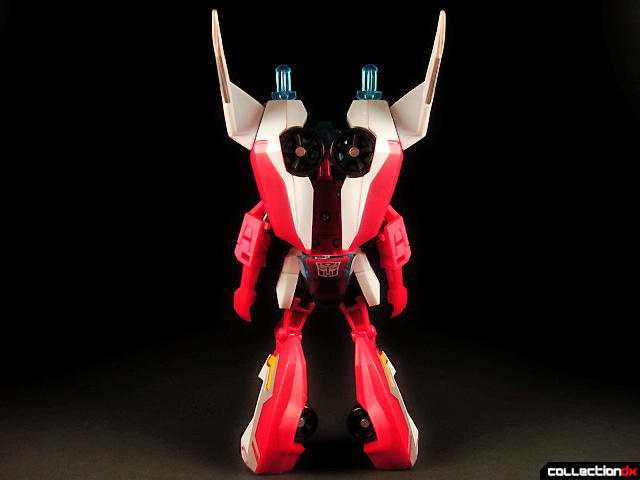 Articulation is pretty good considering it is a transforming toy, It's so well designed I tend to forget that this toy has a transforming gimmick. My Arcee has tight joints all over with no complaints so far. She is filled with ball joints, swivel joints and hinges. The waist joint can be seen in use in this picture. 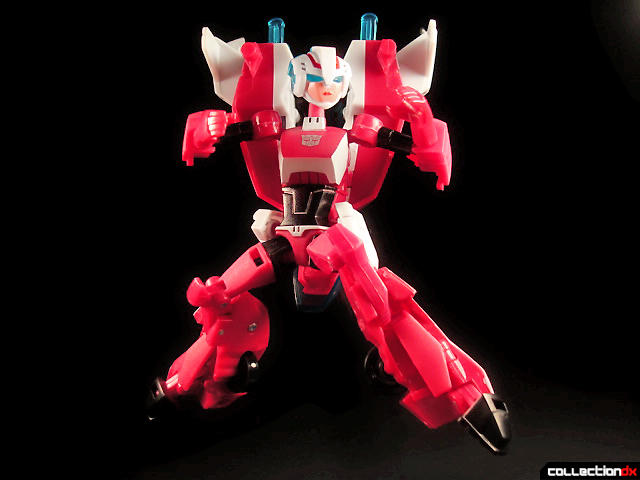 I'm not actually sure if she could fly or not, but here she is doing her best at flight. Notice how conveniently placed her swords are... 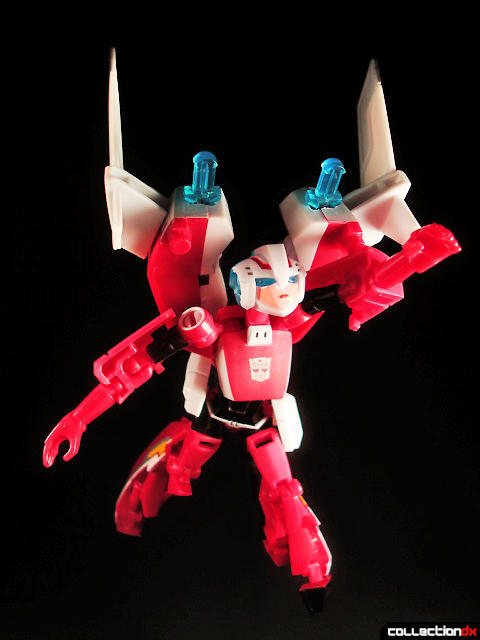 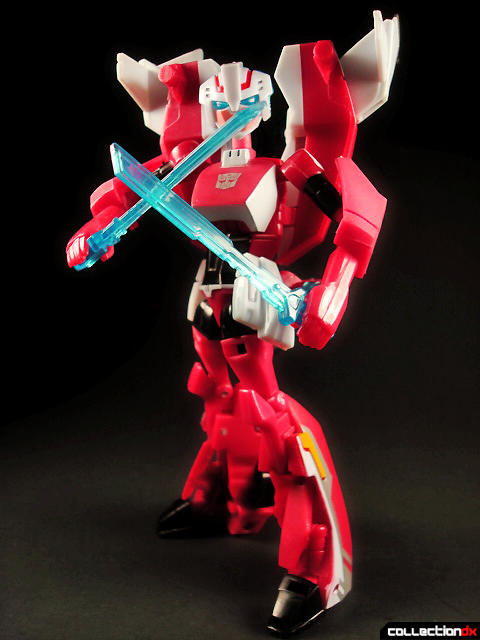 Something I found very striking was here great light piping. This is due to the fact that the entire back of her head is translucent blue made of the same plastic as her swords. I used to think light piping was corny, but there are certain times that light just hits the figures a certain way and makes you utter the word "cool". This photo happened to be one of those moments. As I was taking a close up of her face, I caught a glimpse of this great effect to share with you guys. There is no Photoshopping done to the light effect, nor clever lighting. 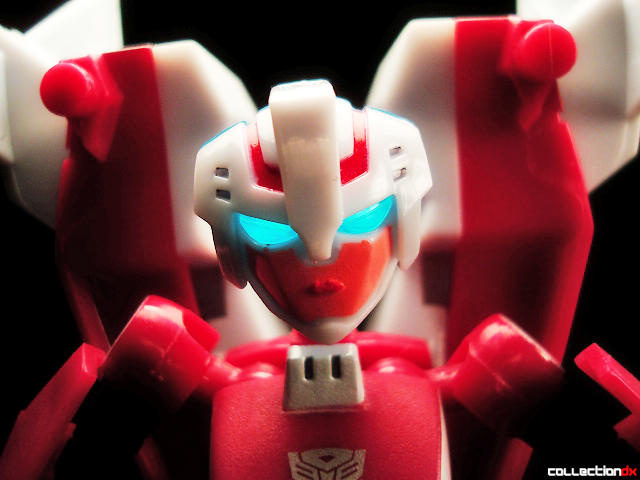 Bottom line is that it's a solid, although somewhat small, figure and a perfect addition to your Animated collection, or any collection for that matter. Joints are tight with tons of articulated joints (at least 26 that I quickly counted), paint applications are clean although there was a couple of random pink spots about the head from the paint used for her face. If you can find her, pick her up.

Note: For those highly familiar with this Hasbro release, you may have noticed a bit more detail than what this figure normally ships with. This is due to some use of gray Gundam marker for panel lines, with a touch of silver lining for the waist and a touch of red on the lips. Very slight, but I felt it only fair to make readers aware that this is not factory detail.

Damn, missed my shot at getting this gal.

The front of her lower legs kinda bother me because they're too segmented-looking; not at all the smooth aesthetic of "Animated".

Initially, I was kind of put off by this because my first time transforming her, I noticed the legs were hollow, but then I realized that there are flaps that fold in to cover the hollow legs somewhat. While not smooth, it captures her shape and likeness very well.

Fear not if you missed out, she may pop up at some TRU, I happened to see four at my local store for the nice price of 12.99 ( Pretty good considering her high ebay prices and 16.99 TRU charges for their other exclusive animated figs). They disappeared almost instantly though.

Happy New Years by the way everyone!!

The black backdrop looks great with this figure.

i have her too, and i'm really happy :) she's a simple but great toy.
i've also repro-labeled mine, which looks good

There's tons of these at my local TRU - keep an eye out for them.

See guys? There is still hope, I think it's a matter of location. Good luck

Several people who own this figure have reported extremely fragile hands, resulting in the thumbs breaking off under mild stress in a few cases. If you get one, treat it carefully.

YES! I will be updating the review to warn of this, I found out after making the video that the figure had stress marks at the base of the thumbs. The video was the second and last time I clipped the swords on and that's all it took. thanks for the comment!