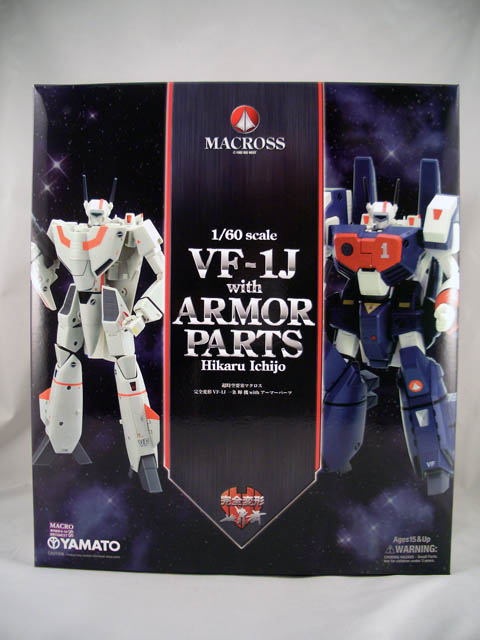 The Protector Weapon System GBP-1S Armor was used in 1 episode of Super Dimensional Fortress Macross by the title character, Hikaru Ichijo, and has gone on to become a bit of a legendary accessory. Bandai originally made one way back in the day, but that toy seemed to be hard, even then, to get your hands on. Years later, Yamato would get their hands on the Macross license. 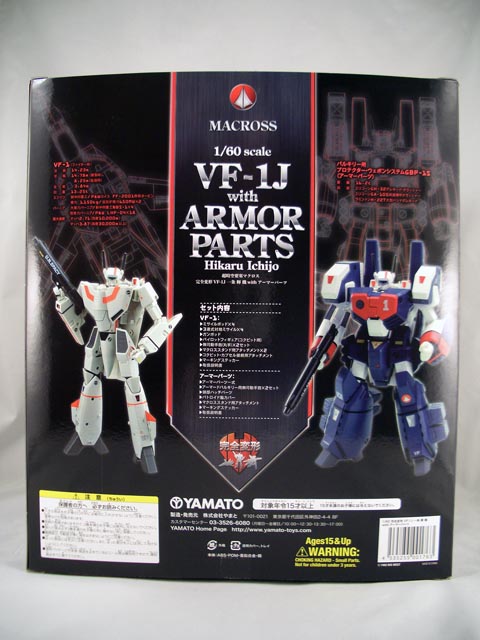 This toy is Yamato's second attempt at a 1/60 scale Armored Parts. Their first release in the 1/60 scale a few years back was greeted lukewarmly by fans. The general consensus was that it looked pretty but the armor parts were quite fiddly and would pop off with the most casual of handling. Well, I am happy to report that this release for Yamato's newer 1/60 line is rock solid. 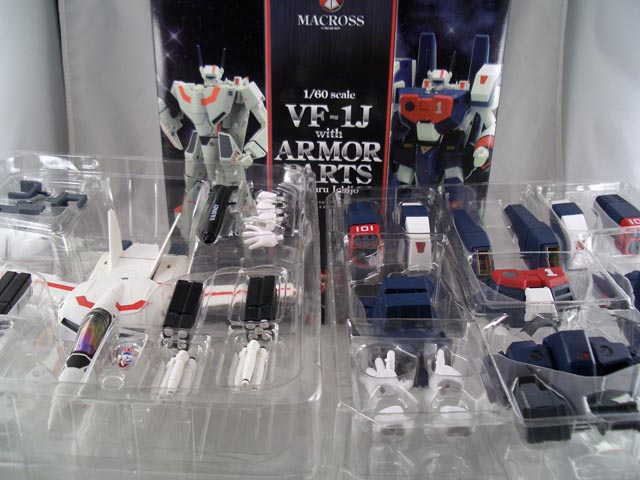 The box measures 12.5 inches by 11 inches by 6.7 inches with four-color images decorating it on all sides. It's the exact same dimensions as any other Strike/Super Armored VF released in the series, but features no window or lid to view the contents. 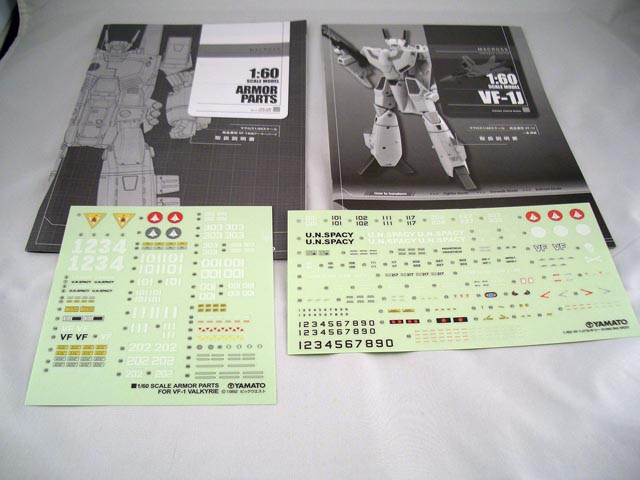 Inside you have two vacuum-formed trays. The first tray contains the VF-1J and its accessories. The second tray contains all the armor parts. The VF-1J tray includes:

The VF-1J is almost identical to the previously released version. The only noticeable difference is that Yamato added grey trim around the “eye” of the head, which helps make it pop a bit. Everything else is the same so I will be focusing on the armor parts in for this review.

Attaching the armor to the Valkyrie is very straightforward. Yamato engineered the 1/60 2.0 Valkyries to accept accessories like the Super/Strike parts and GBP-1S armor parts from the very start. 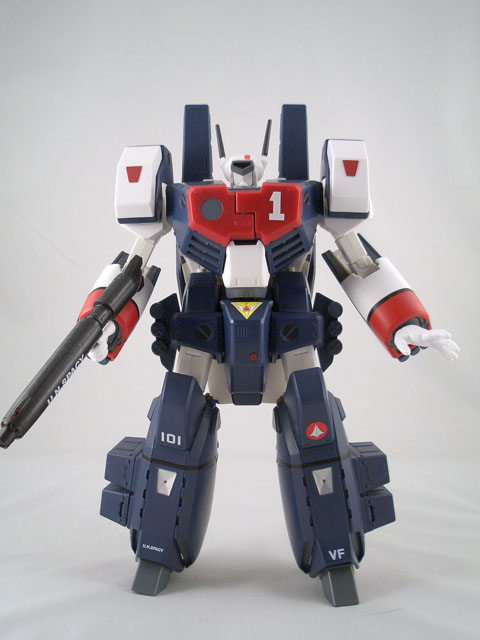 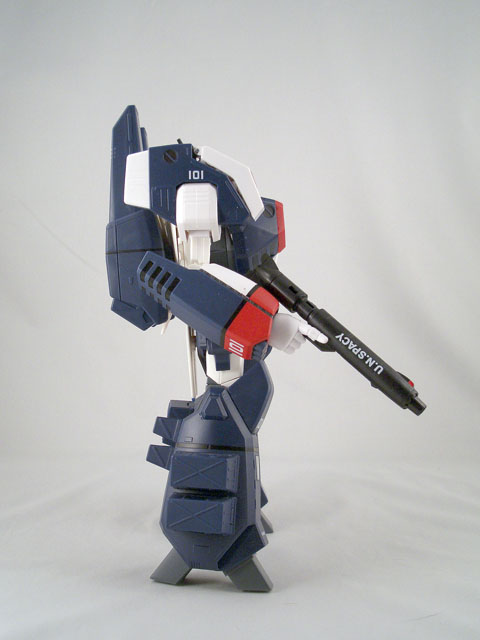 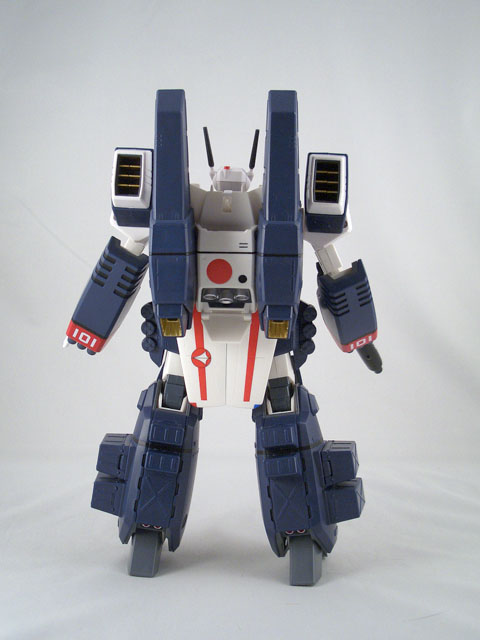 You first place the side and neck covers on the Valkyrie to help fill in some mass. They all fit in nice and tight and give a satisfying click when properly aligned. These are optional parts so you don't have to use them, but it seems that most fans have wanted side covers for a while now. I'm kind of mixed on them myself. I would have chosen to mold them in white to match the Valkyrie. 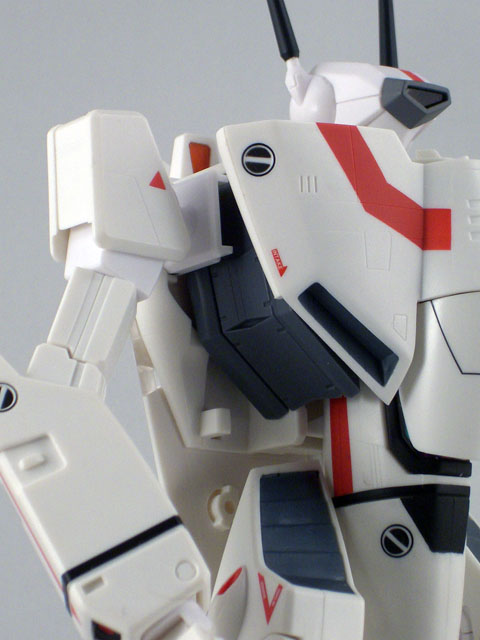 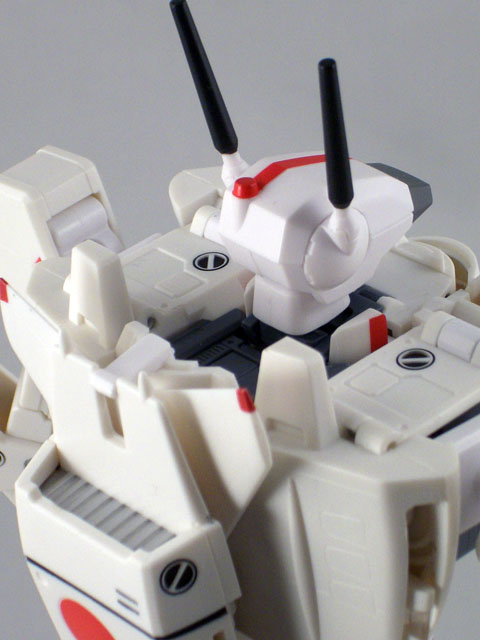 Then attach the covers for the feet. These help make them look more in proportion when all of the armor is on. 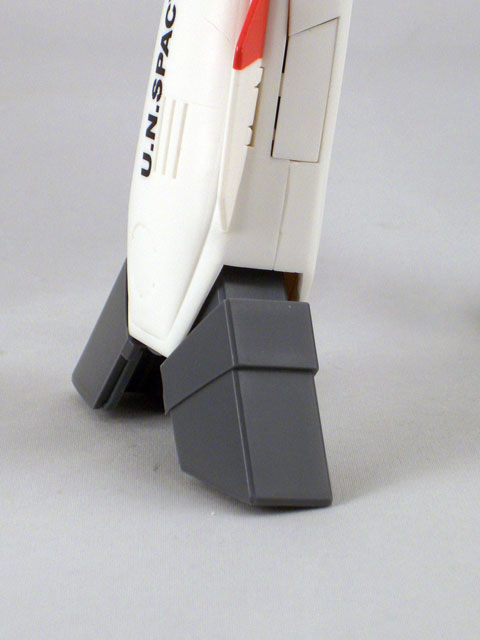 From there, you just add on the armor pieces. The parts fit together with a nice solid click. The ABS plastic parts themselves feel very well made, and not cheap whatsoever. 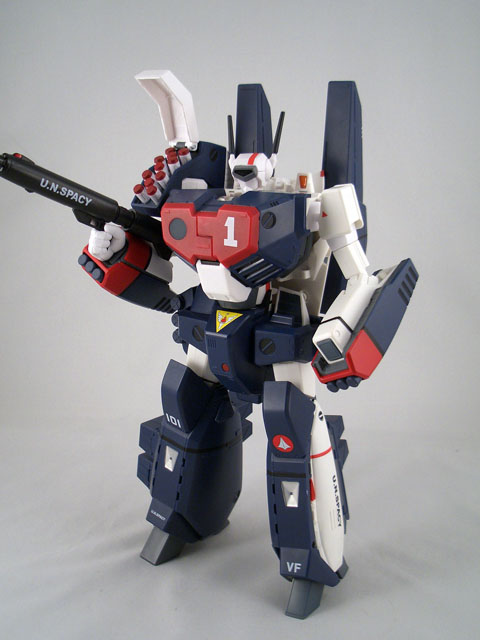 The leg armor is made of four pieces. You first flip the leg fin in, and then attach the parts around the leg. 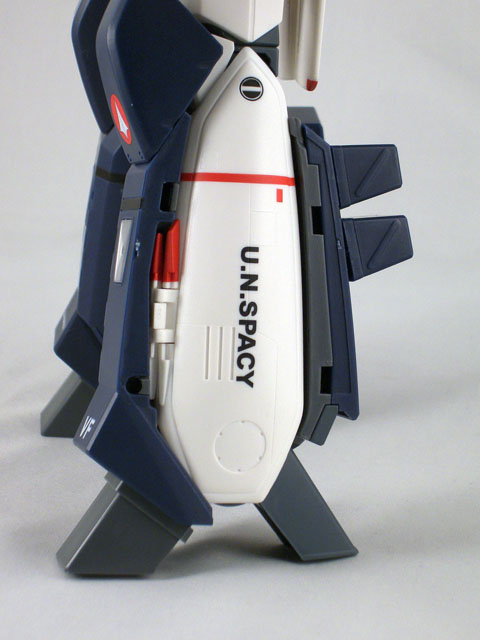 The waist armor is made of 6 pieces: front piece, back piece, two side missile pods, and two intake covers. You attach the front and back parts together, slide the missile clusters on to secure them, and then slip the intake covers on. 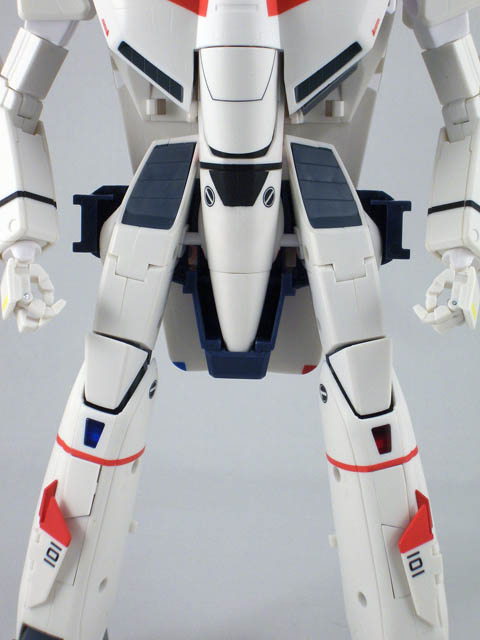 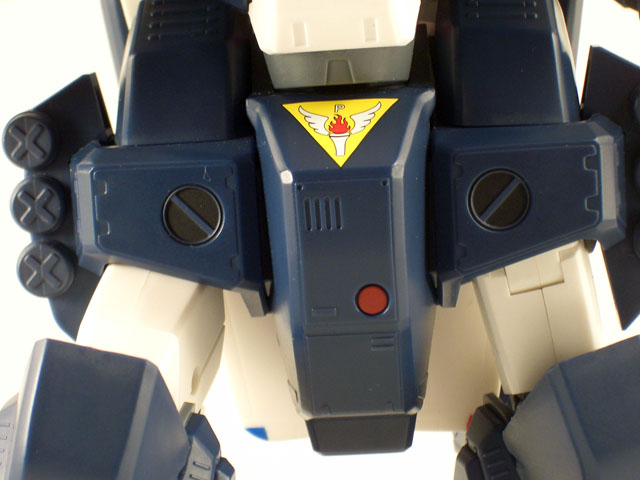 The arm armor has two options. You can use the built-in articulated hands if you want, but many will probably find those a bit small and spindly when the rest of the armor parts are on. Yamato has also included a pair of larger than normal “anime” style hands. These hands are bigger than the “anime” hands included with the Valkyrie and can be attached to pegs on a plate that slides into the end of the arm armor. 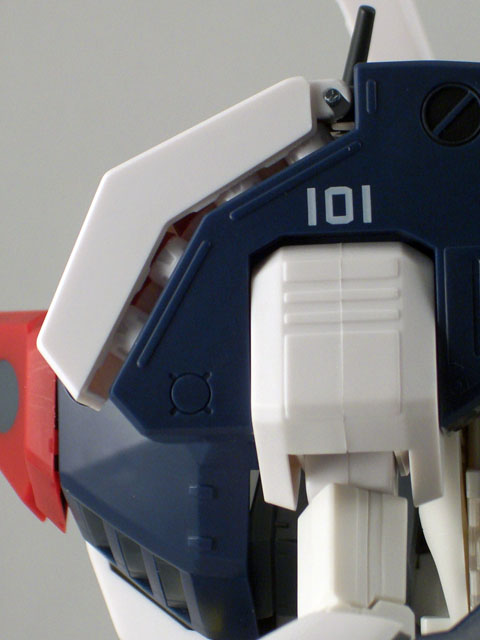 The shoulder missile pods fit snuggly over a faux-shoulder that fits over the Valkyrie shoulder plates. Again, these parts are used to help keep the proportions anime-accurate. The problem with this is that the faux-shoulders are molded in color, in this case, white, preventing the set from being "anime accurate" should you want to use the armor with other Valkyries of non-white base color. 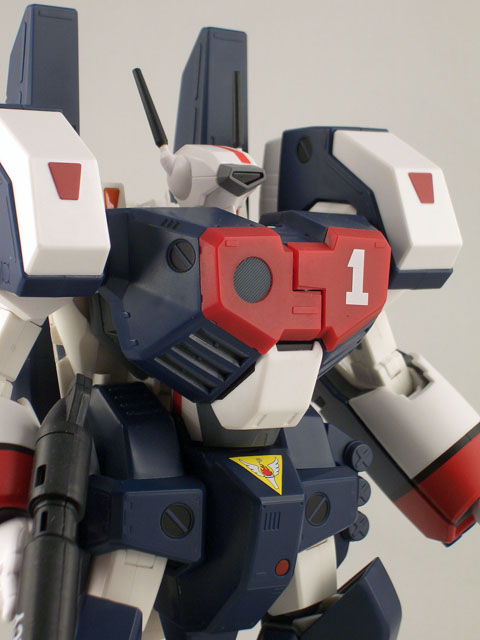 The chest armor just clicks onto the front and the backpack slides on like the previously released Strike/Super armor. With that, you’re done! What you are left with is a very solid armored VF-1J that can be handled and played with without any fear of parts falling off. Articulation with the armor on is very good, with lots of freedom of movement, but, because the armor is so bulky it's hard to tell.

We all know the purpose of the GBP-1S Armor is to deliver a heavy-duty payload of missiles. Hatches on the chest, shoulders, and legs open to expose the missile clusters we all know and love. 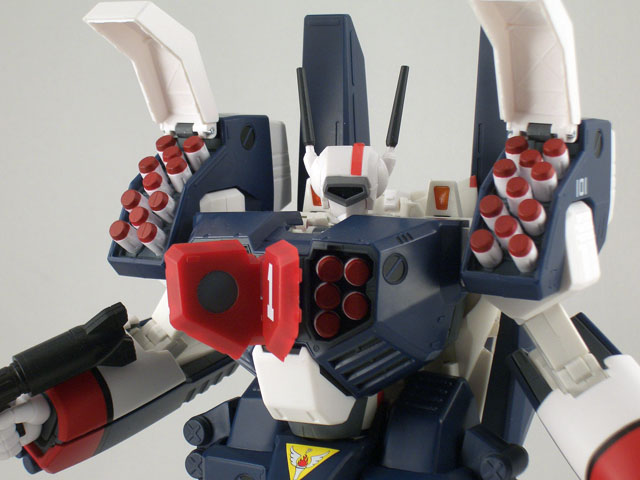 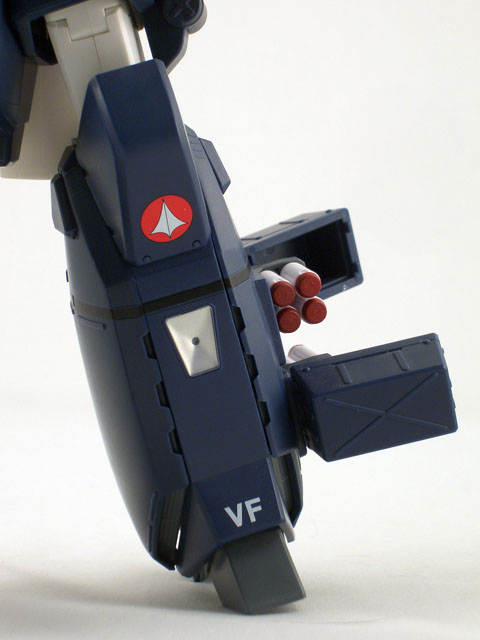 If you do not own a VF-1J yet, the Armored Parts & VF-1J Set is the way to go. You get the VF-1J with a slight tweak to its paint job and an awesome set of accessories that are fun to handle AND look good on display. It's a real winner and fans will not be disappointed by any stretch of the imagination. 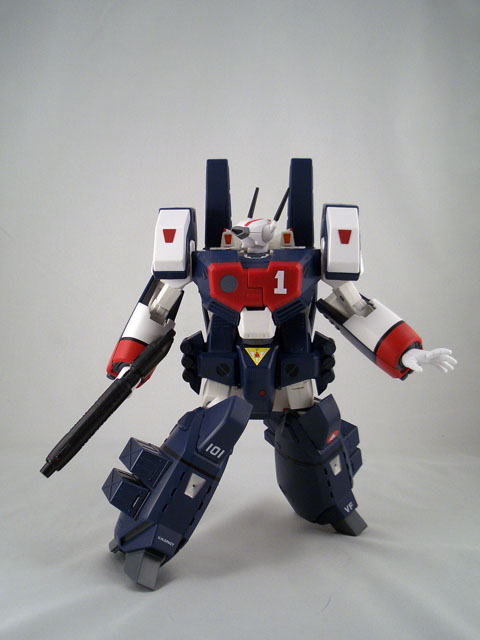 Already own a VF-1J? You have some options. Yamato will be releasing just the armor set by itself soon. Yamato also made a web exclusive armor parts set that included firing missile clusters, allowing you to display the machine firing all of the missiles. Sadly, I didn't get that version and doubt I will be able to get my hands on one. 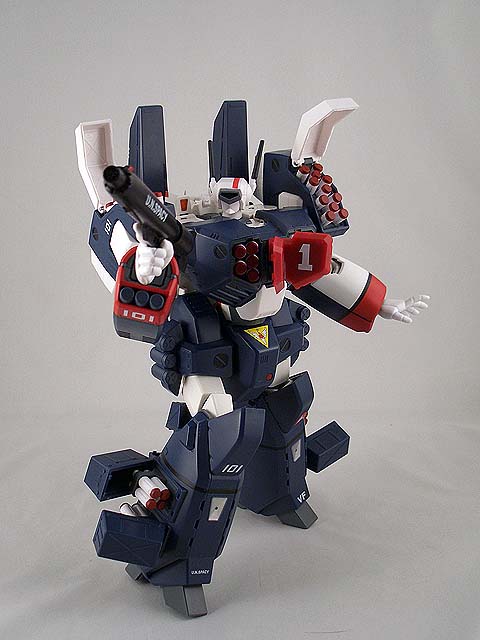 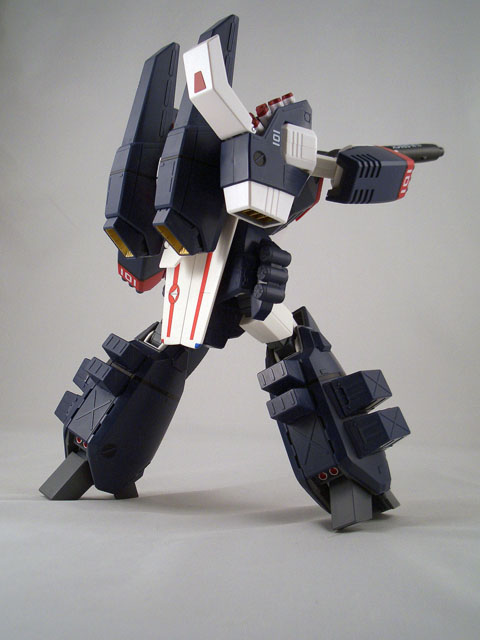 10 comments posted
Bad Ass. When do we get the

Bad Ass. When do we get the video review?

Beautiful! Great! Legendary! Congratulations Yamato and thanks for the review, Atom!

This looks really nice. I own the old armor parts, and finally just put it on display (after a couple years boxed). While it looks good standing still, there's no way I could pose that bad-boy in the dynamic way you seem to be able to here. Also, all the missiles on the old one are seperate pieces, which is neat...for a minute, until you realize you'll NEVER take them out of their mountings. This looks like a killer set. Thanks for the review.

"The problem with this is that the faux-shoulders are molded in color, in this case white, preventing the set from being "anime accurate" should you want to use the armor with other Valkyries of non-white base color."

Although given the Japanese toy industry's new "screw you America" attitude, they might instead do shoulder-only sets as web-shop exclusives.

i have the old version 1/48 but i think this smaller version is much steadier and solid. as always, has nice detail, accessories and paint apps. nice review chief.

I'm wondering if they will have (or do have) a kit with just the armor parts? I just don't think I need so many VFs just to get a heavy armor.
-Stephen-

A quick check of the Web shows that they do have a standalone armor. Yatta! (Should really check before I post.)
-Stephen-

Was there ever a weathered edition of this? Someone said there was one in which the VF-1J came with weathering on it.