“Returning after what seemed to be a false detection of an Ayakashi attack on the Gap Sensor, the Shinkenger find an arrow with a note on it that says "Coming Soon" with Takeru sensing something from before within the house as it starts to haunt him. Deciding to investigate the Gap Sensor, the vassals encounter a sushi-selling man whose hand writing matches the note. After the seller gives them the slip with spicy sushi, Ryunosuke and Mako go to Shojo Valley to find Takeru while Chiaki and Kotoha track down the sushi seller. By the time they find him, ShinkenBlue and ShinkenPink find Shinken Red confronting the Ayakashi Isagitsune who was spying on Takeru to find out the Shiba sealing character. With his mirror medium destroyed, Isagitsune overwhelms the 3 with his magic as Chiaki and Kotoha coming with the sushi seller following. But even all 5 Shinkenger are no match for Isagitsune as they revert to normal as the seller arrives to their aid, transforming into Shinken Gold. After taking out the Nanashi in blinding speed, Shinken Gold battles Isagitsune and destroys him. When Isagitsune revives, he overpowers Tenku-Shinken-Oh until Shinken Gold enters the fight in the Ika Origami to weaken the Ayakashi so Tenku-Shinken-Oh can land the deathblow. After the fight, Takeru reveals to his vassals that he already knows the sushi seller, Genta Umemori.”

Shinken Gold’s primary weapon is the Zangeki Kanjoutou Sakanamaru (“Laceration Calculating Sword Sakanamaru”). This weapon is a tantou- a simple Japanese fighting dagger or knife, sometimes used in place of the better-known wakizashi and katana swords often used by warriors. A tantou can be used with a number of different martial arts. Sakana is a small-dish food served with alcohol, nowadays typically associated with fish; a type of sushi.
Unlike the other five Shinkenger, Shinken Gold uses a fighting style known as iaidou- where the sword is quickly re-sheathed after every cut. However, Shinken Gold has customized this martial art for himself- as he has his fighting techniques, weapons, and lifestyle- around his civilian occupation as an expert sushi chef from his hand-pushed cart. Because of his skill, training, and experience, Shinken Gold is very fast at iaidou, sometimes to the point of carelessly going to extremes (ex: accidentally cutting up a dozen full-size trees just to eliminate a squad of Nanashi)! 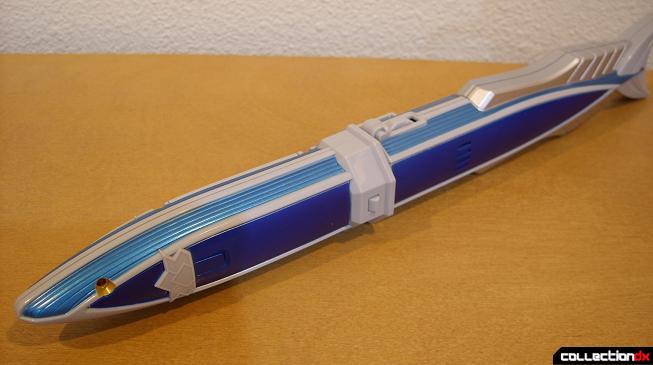 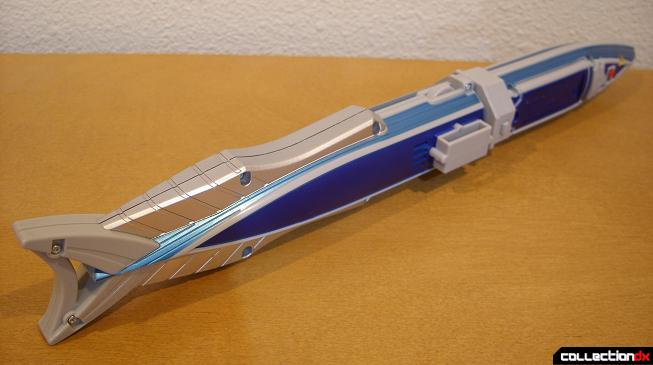 The Sakanamaru comes with a small clip that can attach to the back of your pants or a belt, as a tantou is properly stored behind the lower waist, not on the outside of the leg. (Smaller, modern versions for self-defense can be stored in pockets and handbags.) For ease of holding, just like in the show, the Sakanamaru can be easily slipped off of the clip.
When fighting, Shinken Gold holds the sheath in his left hand and the blade in his right at all times so that he can utilize iaido properly. 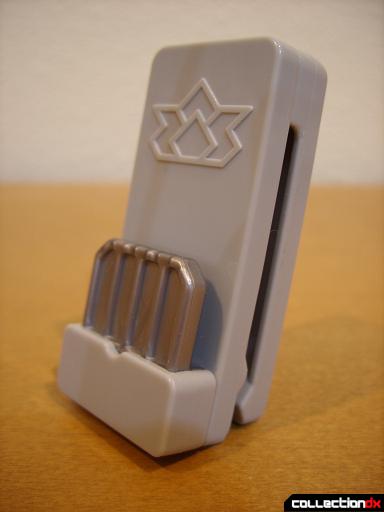 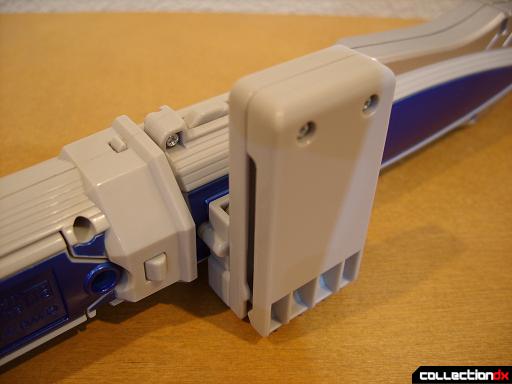 A pair of light gray buttons on either edge of the sheath must be pressed inwards to release the weapon from the sheath, otherwise it will remain comfortably locked in place. 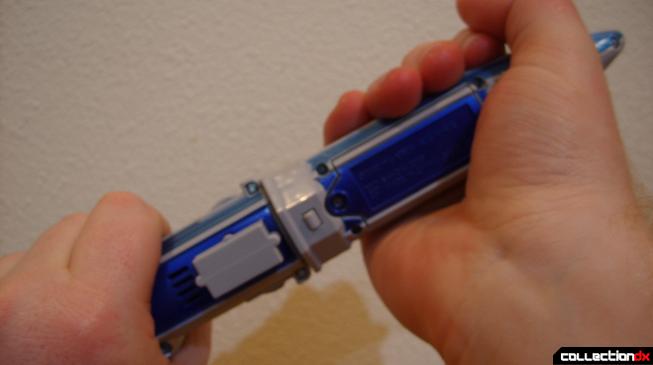 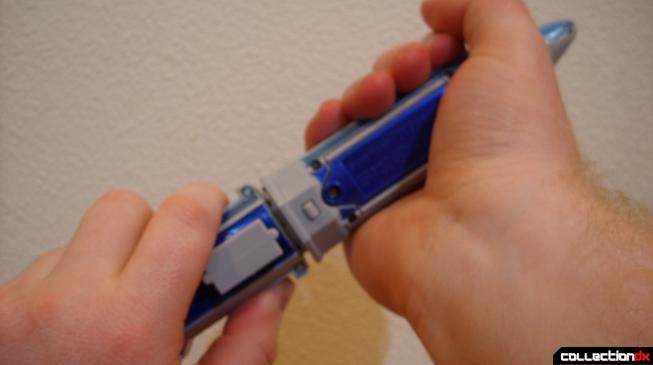 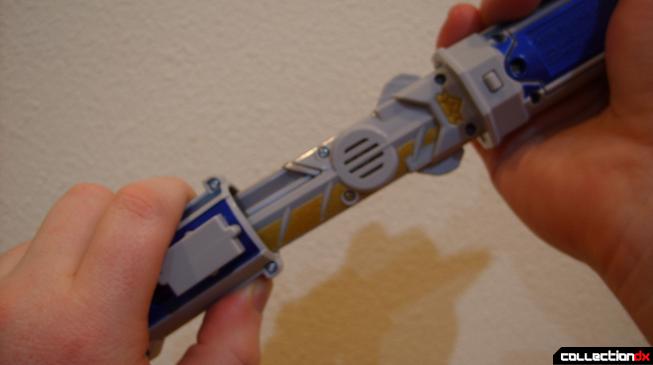 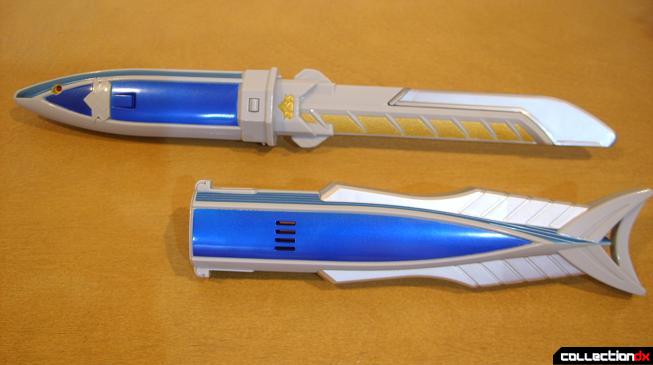 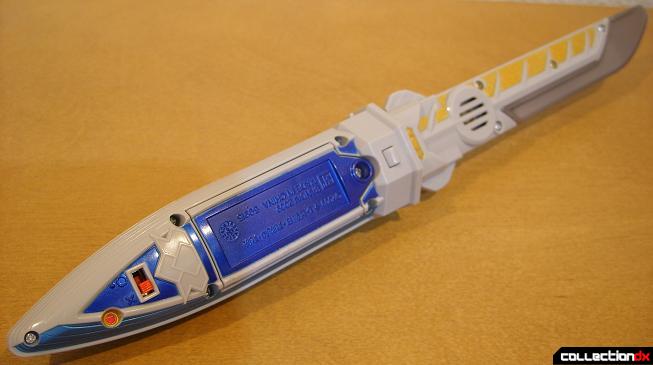 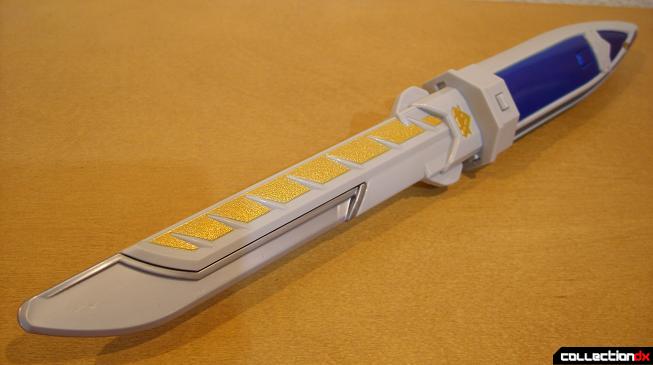 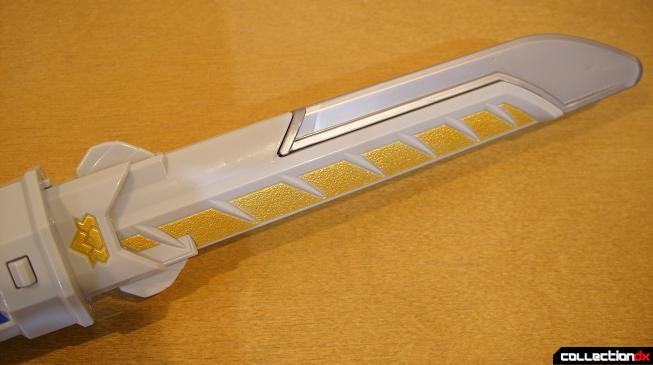 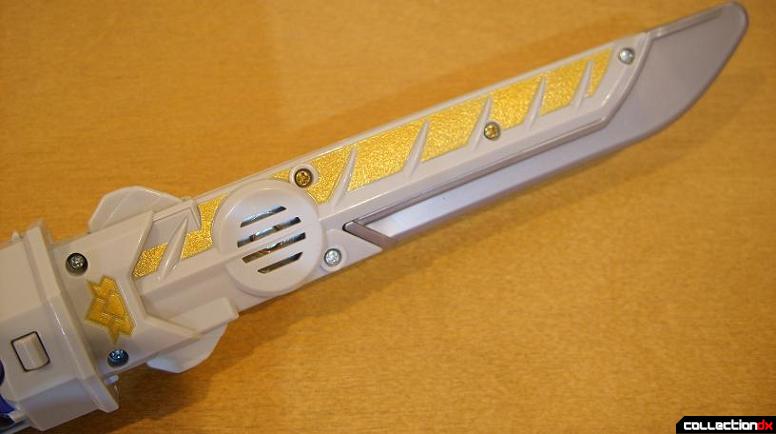 The Sakanamaru has a motion sensor inside. When unsheathed, the toy will automatically emit two random types of slashing sound. At the same time, a red LED in one of the handle’s eyes will flash on-and-off accordingly. Also, once in a while Shinken Gold will randomly speak one of three phrases! 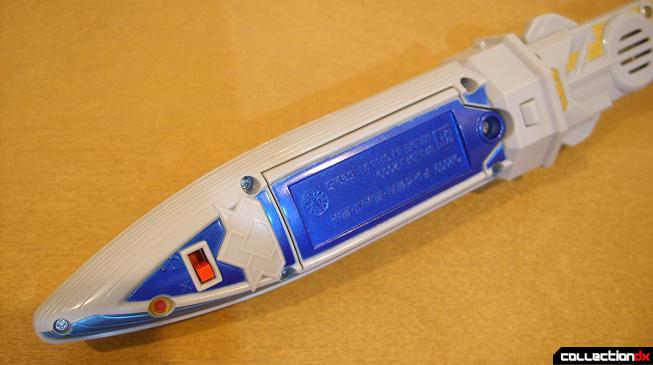 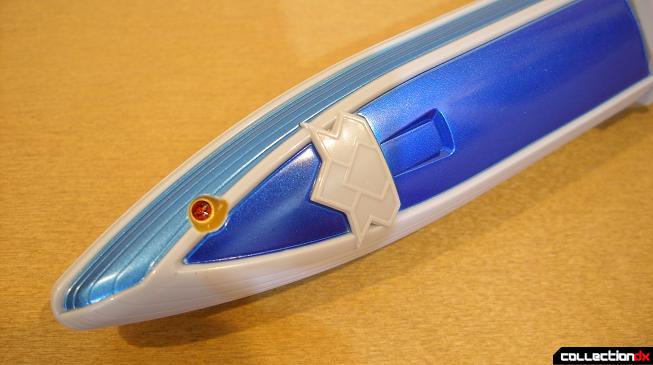 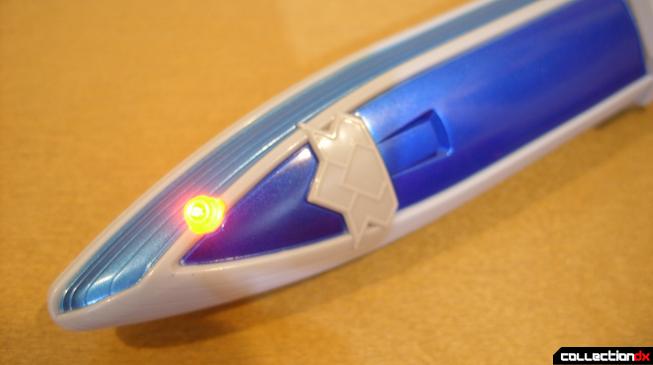 The Sakanamaru can also interact with Hiden Discs (sold separately in different “Shinkenger” sets). Placing one over the grip and locking it will prompt the toy to emit two new slashing sounds when it is swung about! If the Sakanamaru is sheathed and a Hiden Disc is attached, there will be a pulsing power-up sound that continues until the weapon is removed at which point a flurry of slashing sounds will be heard! 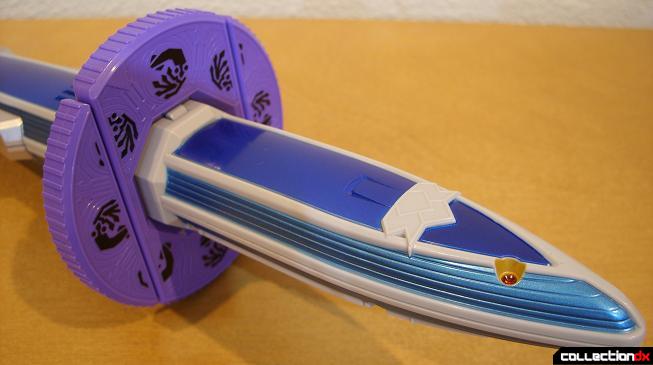 Like the Shinkenger’s own Hiden Saiseitou ShinkenMaru, unfortunately, the Sakanamaru also cannot uniquely identify any Hiden Disc. It also lacks the praxinoscope feature, therefore Hiden Discs do not spin when attached. 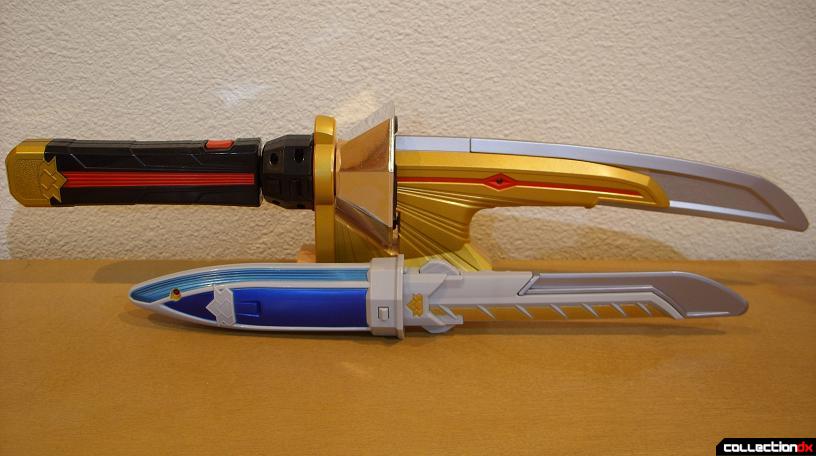 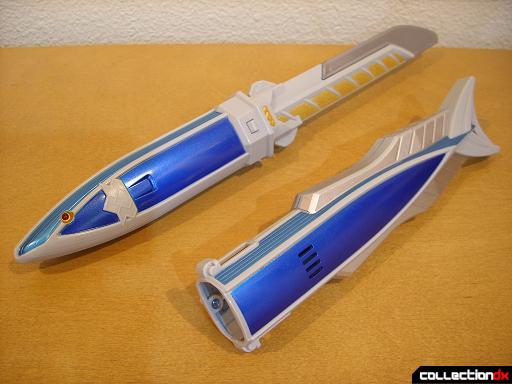 A small, simple role-play toy. Looks pretty nifty. Motion sensor, nice! Random sound effects are also appreciated as opposed to always playing in the same order. You can hold down the buttons on the sheath in order to remove/replace it quickly (though I wouldn’t advise kids doing this without looking… too much). And it comes with a clip that doesn’t require you to get one of the role-play belts. (Thank you, Bandai!) 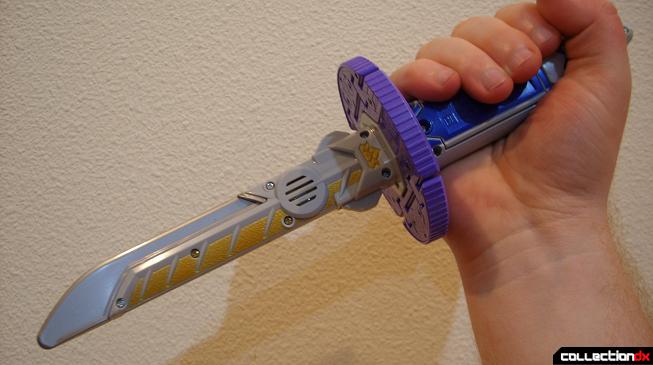 So here’s where I’m fuzzy…
As with the ShinkenMaru, I wish it could have uniquely identified each Hiden Disc and reacted accordingly. They removed the praxinoscope because Shinken Gold uses “electronic mojikara” to text-type out kanji symbols from his custom-made Henshin Keitai Sushi Changer henshin device rather than writing it out in the air like the other Shinkenger. (This, of course, is just an excuse for PLEX and Bandai to attempt integrating cell phone texting into- yep- another Super Sentai cell phone device. …Make it stop, make it stop!) I liked the praxinoscope gimmick, but regrettably, the ShinkenMaru was the only toy released with it.
The other thing that bugs me is the motion sensor. While some toys are good in that they register little bumps (the DX Tokusou Gattai DekaRanger Robo from 2004’s “Tokusou Sentai DekaRanger” was the first, if I remember correctly), this thing is: A- too sensitive; and B- too random. In the case of role-play weapons, perhaps some control over when a sound plays would be better. I mean, it takes a lot of swings and bumps to hear Shinken Gold speak once! Keep the sounds playing randomly, but let us decide when to trigger them.
On that note, the ShinkenMaru was sensitive to the number of times- and speed- that a Hiden Disc was spun up in order to trigger special attack effects. And while this toy seems to do the same when you re-sheath it after bouncing it about a bit, there is no definable way to judge how many ‘bumps’ it takes to trigger the special effect when it’s removed again! This also applies when a Hiden Disc is attached. (The all-Japanese instructions- which I cannot read- were not clear on this with pictures, so perhaps I’m missing something…)

A nice simple role-play toy with style, just the way I like ‘em. But I must admit to being disheartened a bit with the Zangeki Kanjoutou Sakanamaru over the lack of control with the sound effects. A trigger woulda been nice! But it works for me just as a stylized Super Sentai knife.

HOW ELSE CAN I WATCH AND ENJOY ONE OF YOUR SHOWS!?

a. You're obvs not meant to, because baka gaijin wwwwwwwwww
b. DVD sales really wouldn't do as well as fans like to think.
c. Ever heard of downloading?

a. LoL
b. I didn't say sell them over here, because those would be terrible sales. I wouldn't mind importing them... much... if they had an option to show English subtitles.
c. I don't have a bit torrent program because I haven't been able to find one that is free to download and use. Otherwise I would be using TV-Nihon's subs directly from their site.

EDITED BY ADMIN: Let's keep the piracy discussions off the site please. Thank You

But, the ADMIN is correct- stealing and pirating are bad.

I think you're supposed to repeatedly sheathe and unsheathe the sword to get it to work properly. I could be mistaken, but that was the impression I got from one Japanese video review.

No- re-sheathing resets the counter after the special effect plays. So if it counts one swing and you put it back, then the next time you pull it out you're back to count-one. Shinken Gold may be able to use iaidou in the show, but kids can't with the electronics in the toy.
The same goes for when you attach a Hiden Disc.