In the world of high performance combat aircraft there are winners and there are losers long before planes are ever sent off to war. The famous Advanced Tactical Fighter competition between two cutting edge stealth planes, the YF-22 and the YF-23, captured the attention of many with the results still being hotly debated by aviation enthusiasts. As the robots of the Muv-Luv franchise are mostly based on real world airplanes, both the YF-22 and YF-23 are re-imagined as a pair of sweet looking robots that competed to become America's next Tactical Surface Fighter for use against the BETA aliens. Lockweed Mardin's YF-22 faced off against Northrock/ McDaell Doglam's YF-23 and it looked like the latter was going to win it all. And yet, even in a fictional world, the YF-23 lost the competition and the YF-22 started mass-production as the first machine optimized for fighting both the BETA and other TSF's. The tale doesn't end there as the data used to make the YF-23 has seemingly found its way into the hands of several other designers to become the basis for the the Russian Su-27 and a mysterious variant of the Japanese Shiranui. 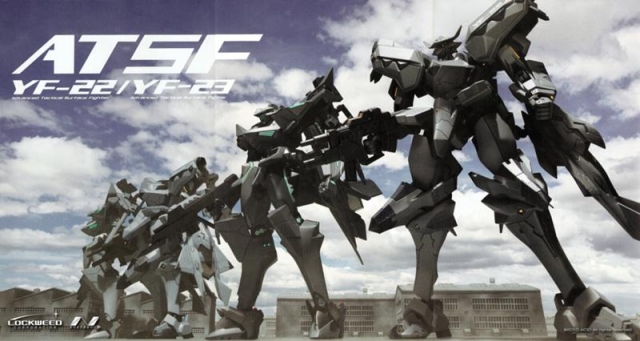 The two pairs of YF-22 and YF-23 prototypes stand together at the ATSF competition.

-image is from Tactical Surface Fighter in Action #8 "Question of Honor."

Of course in the world of direct market merchandise, anyone can be a winner as long as they get a toy. In fact the YF-23 Black Widow II got two toys with each representing the pair of prototypes used in the fictional Advanced Tactical Surface Fighter competition. 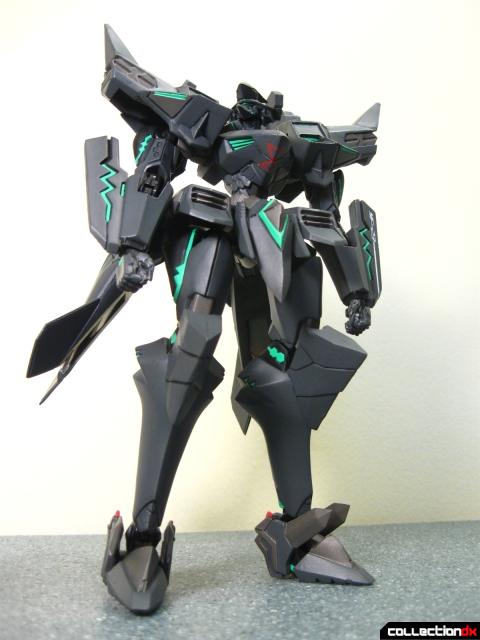 This is the first YF-23 prototype which is designated PAV-1 "Spider". Just like real life, there were two YF-23's built with the first being designated PAV-1 and was nicknamed the Spider by those who worked on it. Muv-Luv's re-imagined version of the Spider makes for a striking image with its angular features and numerous bright green highlights that really pop against its dark gray body. The overall look of this design really captures what I luv about Tactical Surface Fighters. While the Spider is a humanoid robot, it lacks the kind of humanity seen in other Japanese robot designs which in my mind emphasizes its role as a sleek combat vehicle akin to the fighter jet it is based on. As another figure in Volks's A3 line, the Spider stands roughly six and a half inches tall and is made out of thick PVC plastic. 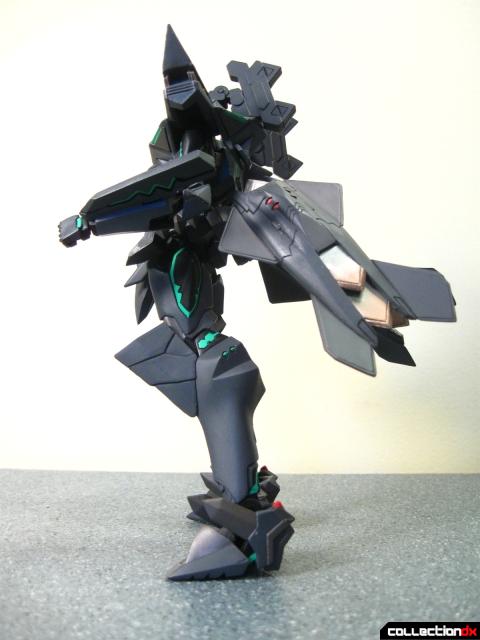 Like all Tactical Surface Fighters, the Spider has a pair of jump units attached to its body that let if rapidly ascend and descend in typical giant robot fashion. Note that the ankle guards have knives on them which is a pretty European-y TSF touch. 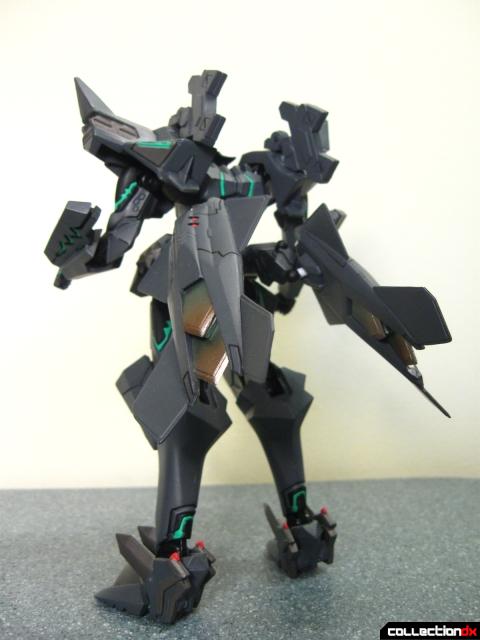 These jump units are attached on a joint piece that ends in a set of pegs which provide basic swivels at either end. This method actually works pretty well on this figure as opposed to on the Strike Eagle. Now due to the small size of the Spider's feet the figure is back heavy enough to tumble if you don't position everything just right. 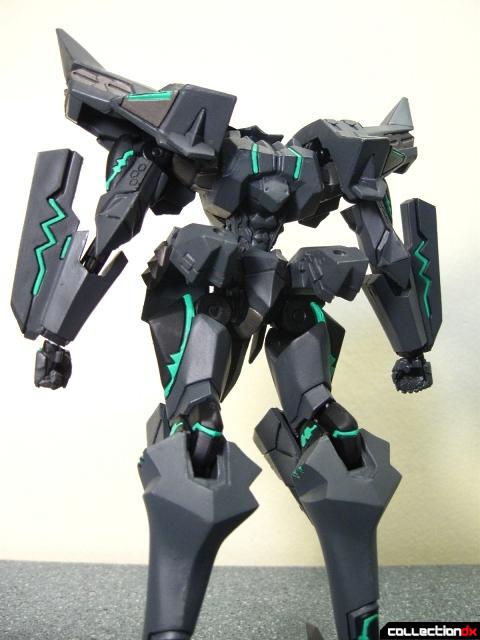 For aesthetic purposes, you also get a pair of fill in parts for behind the knees. These were actually loose in the box and have to be wedged in between the joint to stay in place. I'm not a huge TSF kneepit fetishist so I usually just leave these off. 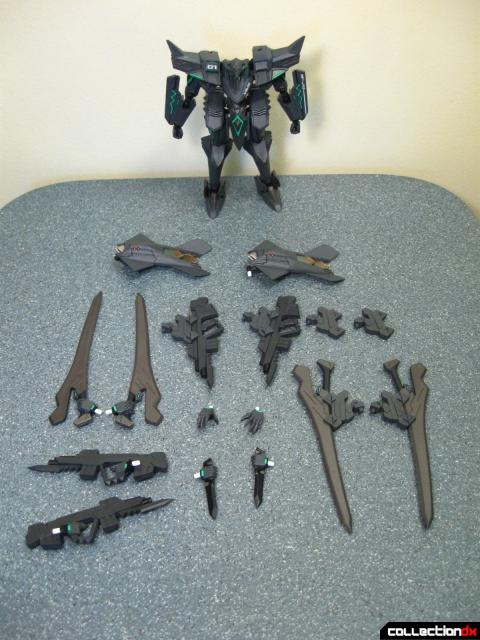 As an cutting edge Tactical Surface Fighter, the Spider's accessories are all pretty sharp in a quite literal sense. You get a full compliment of guns and swords for both the figure's hands and its mount pylons. Also included is a set of bare pylons, some open hands, and two hands with knives. 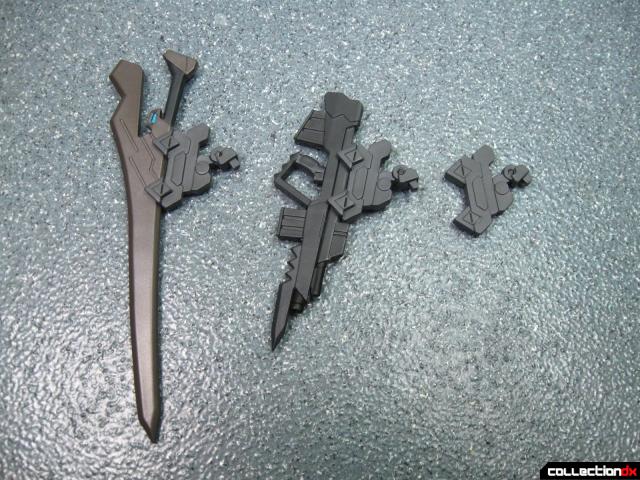 As part of Northrock's and McDaell Doglam's plan to increase combat time for the YF-23, the gun and sword mounts are identical looking which means it can easily load up on weapons. Sadly one detail of the design that didn't make it to the toy is how the YF-23 is meant to have two mount pylons on each shoulder for maximum firepower. It's a minor quibble among fans and the upcoming Kotobukiya kit does it correctly. The idea is that with six places to mount weapons, the YF-23 can continue fighting deep into BETA territory far away from supply lines. On the A3 figure, each mount pylon has a small hinge at the base where they peg into the shoulders. The pegs can be loose so you may have to thicken them. 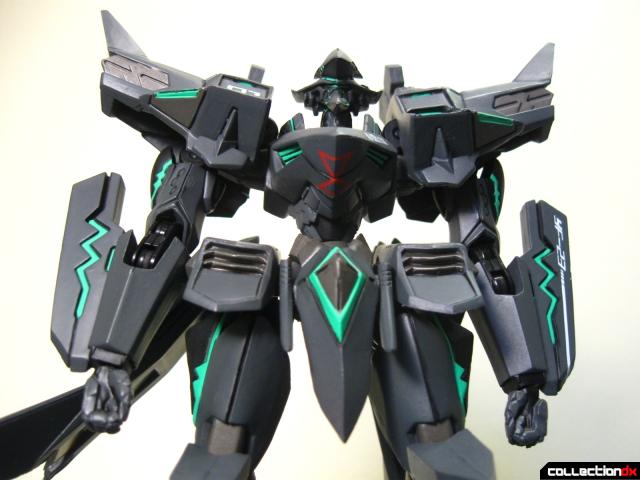 As an excellent nod to the real YF-23 PAV-1, the Spider has a large red hourglass painted on its torso. In real life, PAV-1 had an hourglass painted underneath after some technicians noticed how some panels formed the familiar mark of the black widow. The story goes that some high ranking official got extremely irate at this behavior after seeing that image on the cover of Time Magazine and ordered it removed. On the Tactical Surface Fighter, the hourglass serves are a great way to break up the dark gray exterior with an appropriate splash of color. 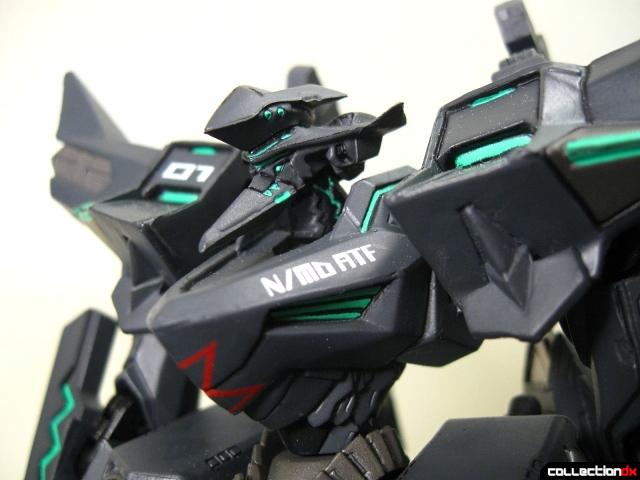 The sharpness of the overall design is complemented really well by the green detailing all around the figure. The use of crisp tampographed markings like the "N/MD ATF" on the chest and the "01" on the shoulder really add a bit of legitimacy for the Spider being a military machine. The "N/MD ATF" denotes that this is an Advanced TSF built by the fictional companies Northrock and McDaell Doglam. 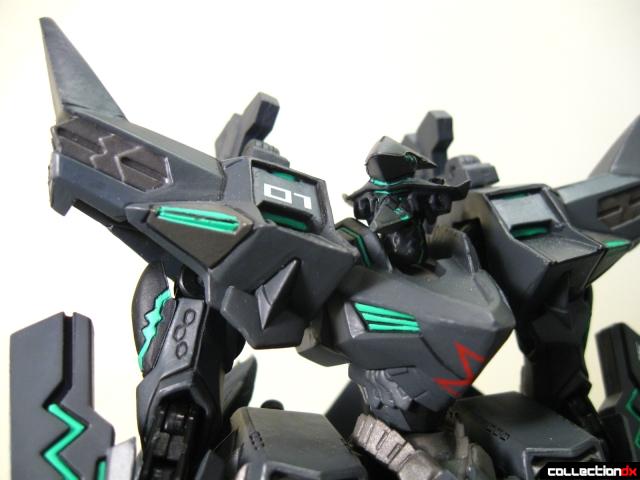 I absolutely love the head on this figure. The narrow double stacked visors coupled with the tiny green sensor dots all around the forehead give it a rather arachnid like visage which is quite fitting for the Spider. The neck articulation is also pretty good with a balljoint at the base that allows for a decent range of motion. Although for some reason the head turns to the right a lot better than it turns to the left. It's just something that speaks to the hand-sculpted nature of these figures. 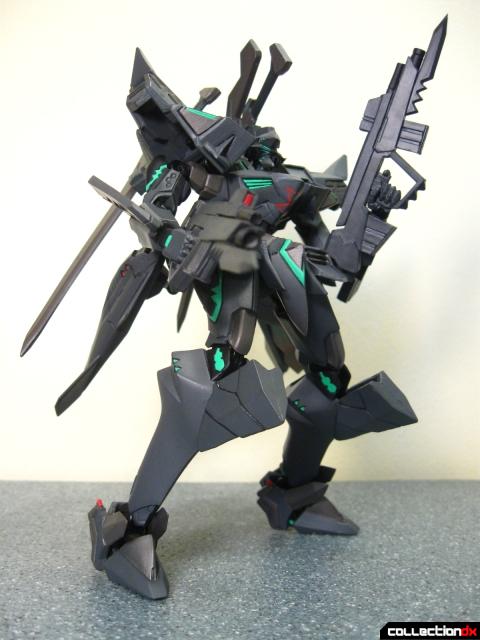 Overall the Spider is definitely no slouch when it comes to articulation. It is capable of posing even when fully equipped and is helped by numerous clicky A-Lock joints. While most of the joints click solidly between positions, there is a limiting factor to what you can do once you take in account range of motion and balance. There's just enough play in the joints that you have to rest the figure carefully in a pose and make sure it will still stand. These guys are kind of like over-sized Revoltechs in a way. 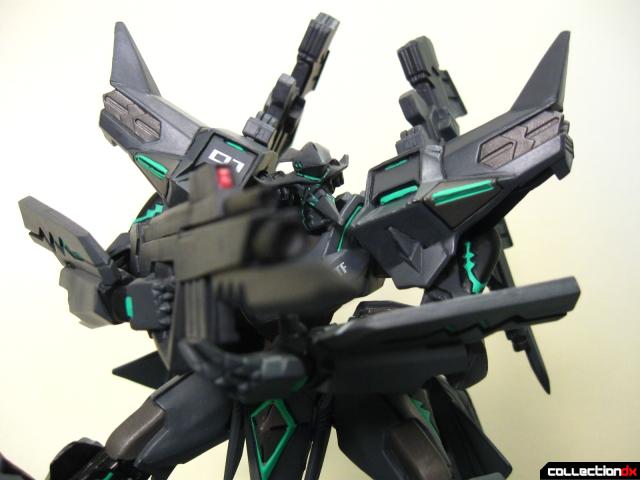 While the arms have an excellent range of motion with free moving shoulders and double-jointed elbows that are somewhat hindered by the glorious shoulder pads. Each pad can angle up and down on its own A-Lock joint but cannot swing in or out. Still the arms can swing out for some great looking two-handed gun gripping. The great thing about the Spider's XAMWS-24 Advanced Multiple Weapon System (very high tech) is how the front grip is covered in spikes and the toy's fingers already end in spikes! When your robot is grabbing spikes with other spikes you know it's hardcore. 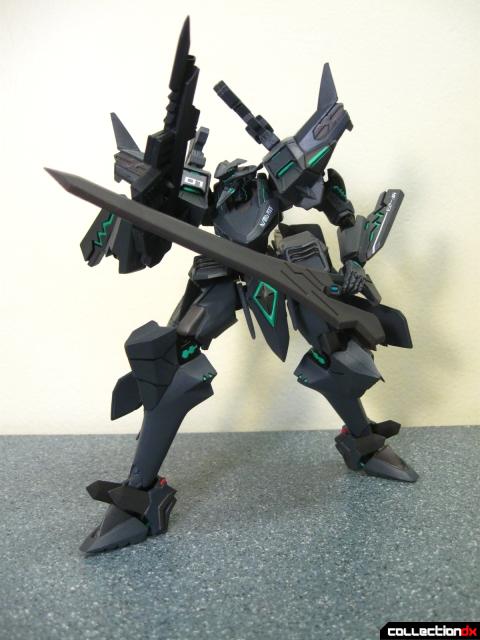 As an experimental machine, the Spider has many weapons with an "X" in their name. The XCIWS-2B Close In Weapon Systems (a very official name for "big sword") really compliment the XAMWS-24 stealth spiked guns. For the most part the shoulder mount pylons works pretty well as long as you don't tilt the pauldrons up far enough for the mounted weapons to interfere with each other. 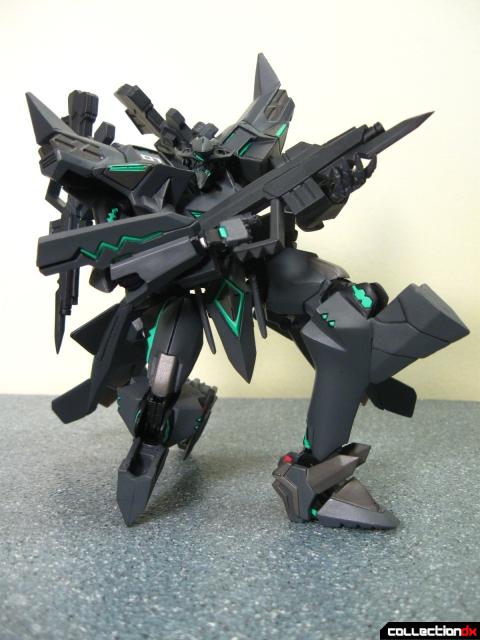 Kneeling down is quite easy for the Spider thanks to the moving skirt plates. Strangely enough on my figure the skirts are kind of hard to move so it's actually easier to pull them out and then plug them back in at a different angle. The setup is the opposite of the Strike Eagle as each skirt has its own long peg that goes into the waist rather than the two small pegs going from the waist into each skirt. The result is the skirts are rock solid and even click somewhat due to how the pegs are squared off. 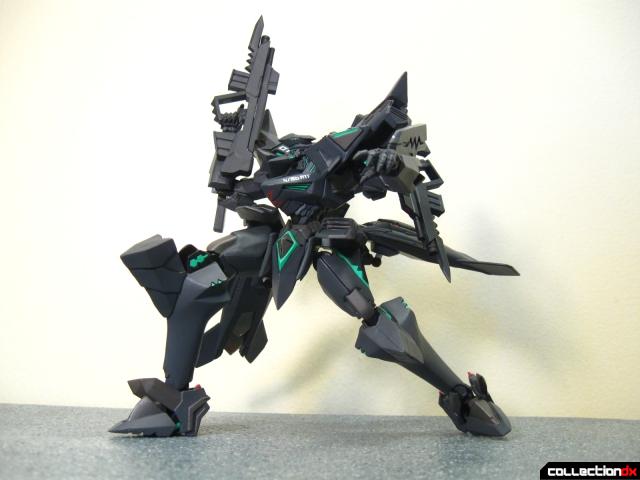 With a little balancing the Spider can spread its legs out in a wide lunging stance. 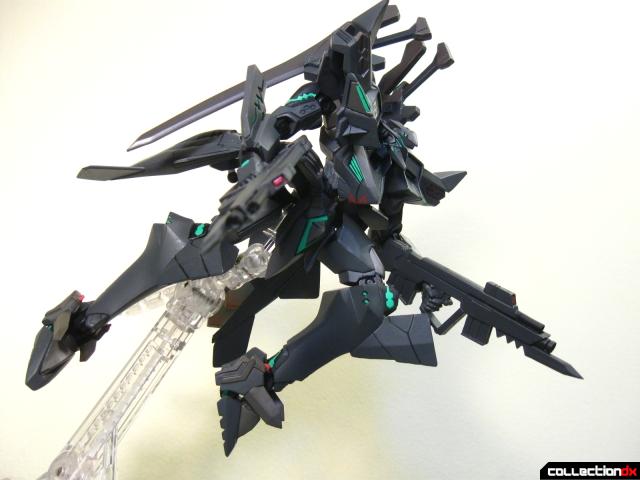 All of its joints are more than stiff enough to maintain a good flying pose. 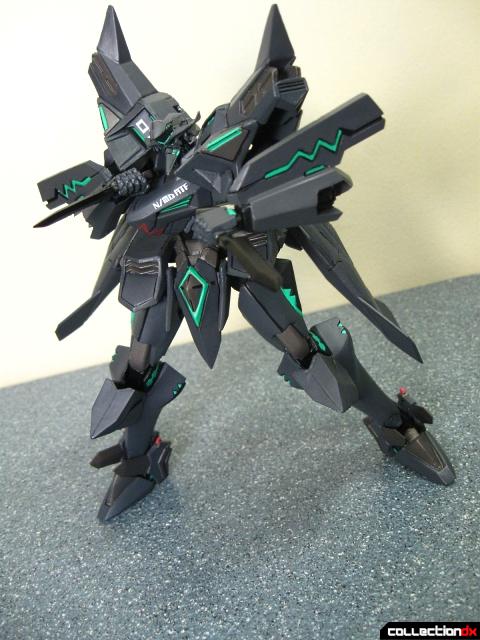 The YF-23 was also at the forefront of experimenting with slightly larger daggers. These actually have some nice light gray highlighting on their handles. I have to hand it to Volks for sculpting new knives with the appropriate hands for each TSF figure. 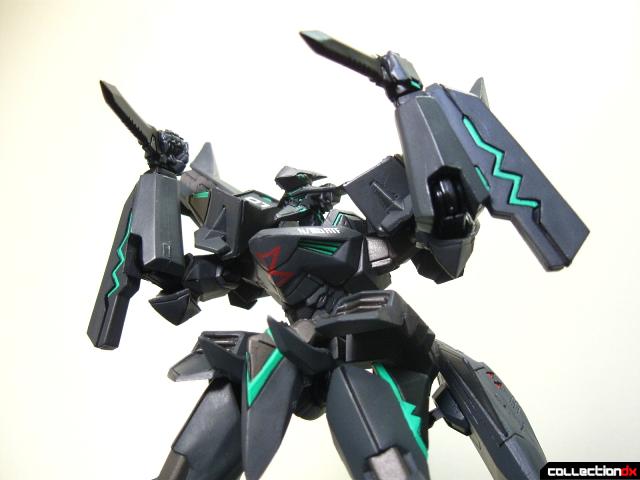 And for total weaponization purposes, the two bladed groin attachments can swing forward. The Spider can stab you from multiple heights all at once. The designers of the YF-23 were very keen in advertising this feature as it is perfectly aligned with American foreign policy. 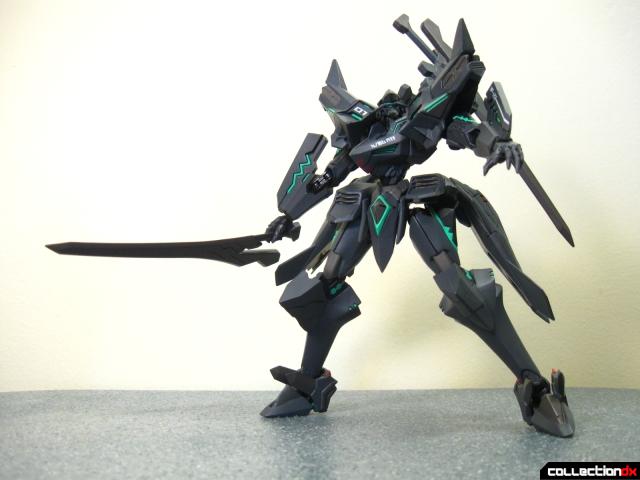 The YF-23's unique swords were one of the things that drew me to the figure. American TSF's generally use daggers for close-combat rather than full on swords but as a less conventional design, the Spider boasts some very large and very lethal looking blades. 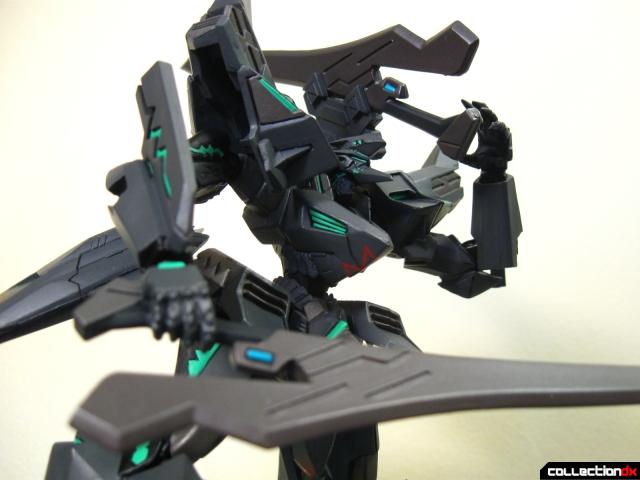 Thanks to the hinge on each mount pylon, the Spider can handily reach up to grab a fresh weapon. 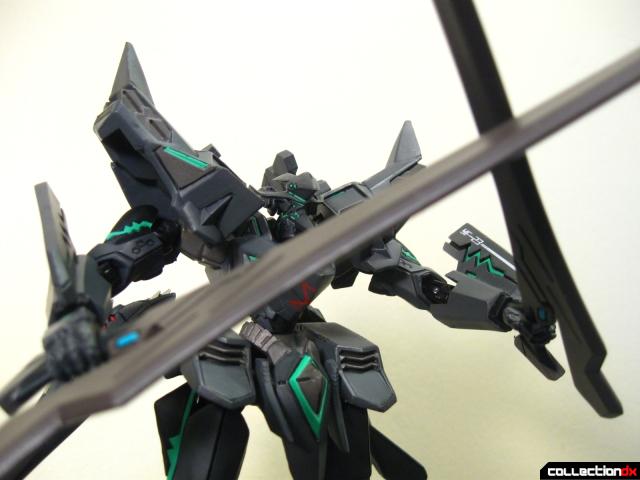 The real life YF-23 is often considered a radical departure from typical airplane design so the Muv-Luv equivalent reflects this by emphasizing powerful melee weapons and a different mount pylon configuration. 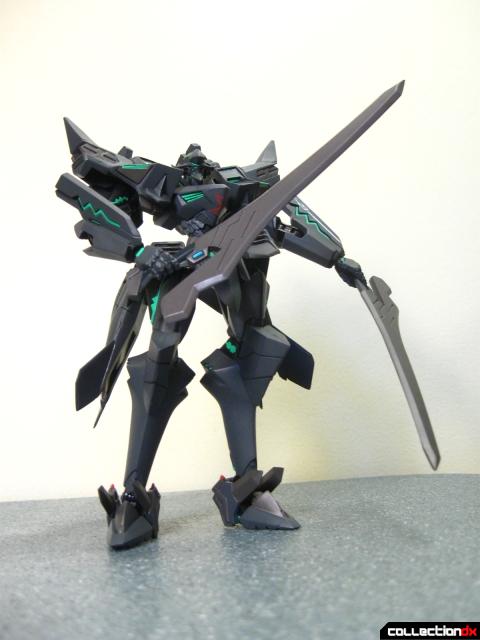 These swords look like they are made to be just as undetectable as the rest of the machine. Smooth with a few strategically placed angles and details. 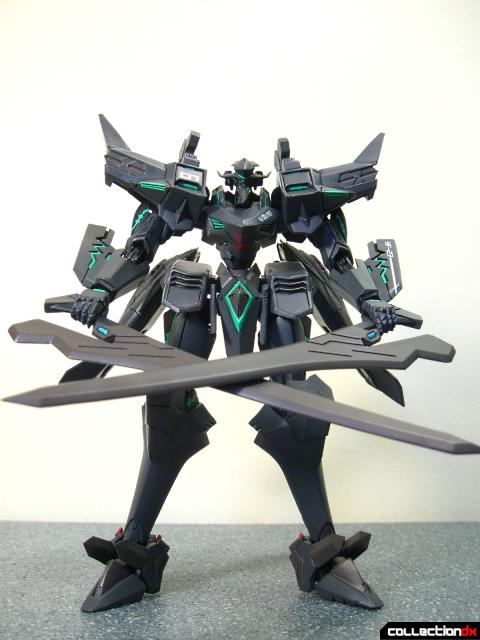 Essentially the Spider possesses swords that were forged from pure stealth-ium. 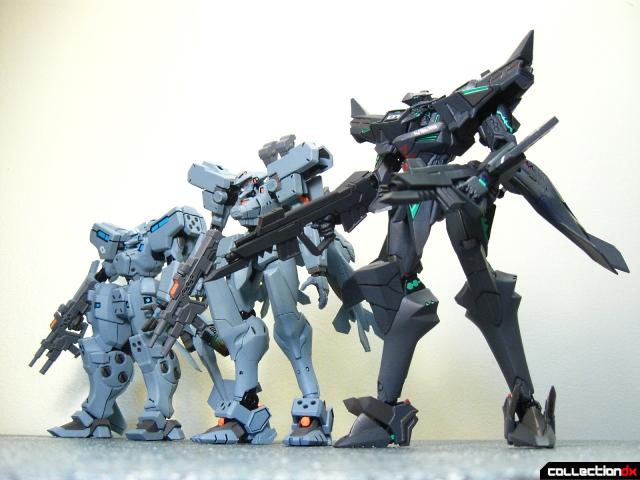 The F-4 Phantom, F-15 Strike Eagle, and YF-23 Black Widow II represent three generations of Tactical Surface Fighter development as well as McDaell Doglam's dedication to improving mankind's ability to drive back the BETA. Unfortunately the results of the ATSF competition ended their dominance in the defense industry. Some haven't been taking the news well... 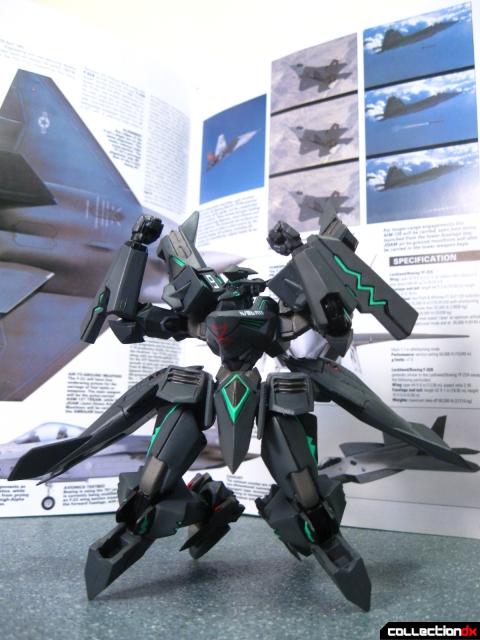 "ARGH! They only mention me in passing! They said I was a loser! That damn contest was rigged! I call shenanigans! SHENANIGANS!!!" 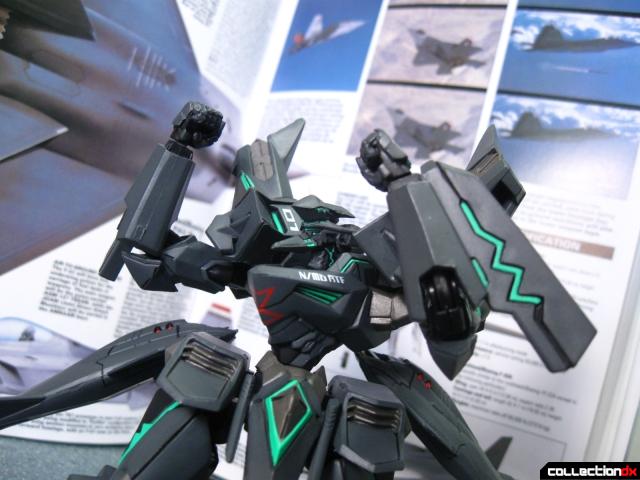 This particular version of the YF-23 was a standard release while the PAV-2 Gray Ghost variant was a special release. Both seem a little on the rare side in the aftermarket but generally don't go above their 6,800 yen MSRP. The YF-23 is a real fan favorite and this figure most definitely does it justice.