(This review is intended to be a direct continuation of this one. If you haven't yet, please check out that one first for best results.)

Now that we've briefly touched on the story, it's time to continue JOJO 101 with an introduction of Stand abilities. Starting with JoJo's Bizarre Adventure Part 3 and playing a major role in the series ever since, Stands are supernatural entities born out of their user's spiritual and mental power. There's a lot of variation within Stand types but there are quite a few ground rules that govern Stand behavior and usage. Here are just a couple of the basics:

Now that that's out of the way, let's examine another of Medicos' JJBA Super Action Statues. 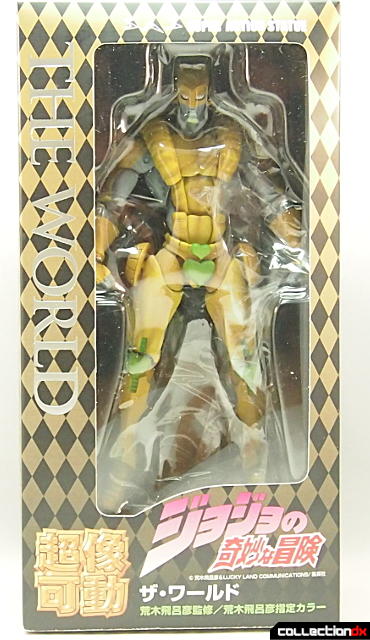 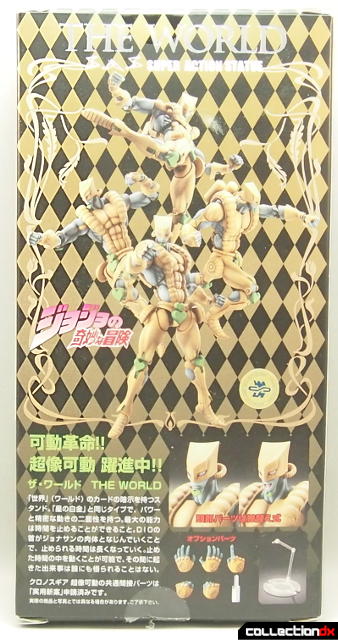 Like the other releases in the line, The World comes in a windowed box with attractive foil lettering done in gold against a patterned background to match the color of the figure. 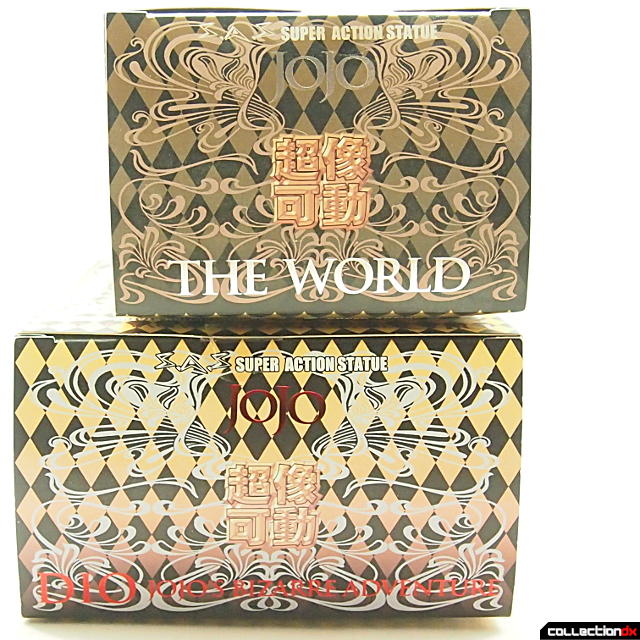 The package for The World is slimmer than DIO's, an early sign that there's less in the box. 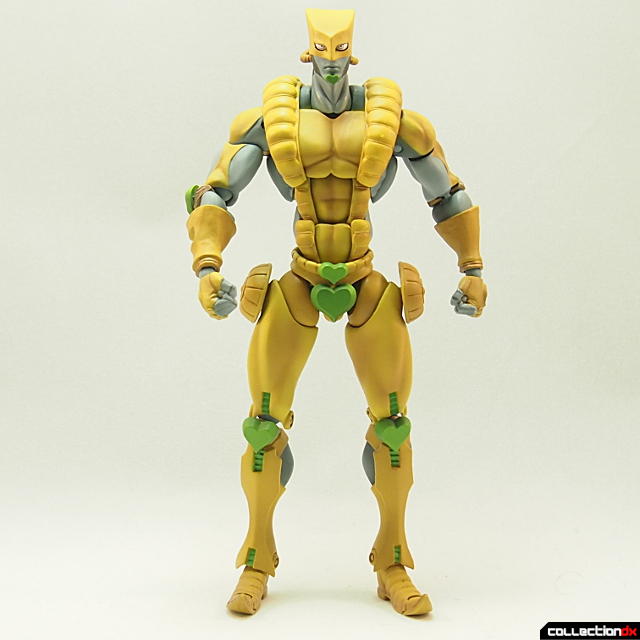 The World is DIO's Stand, named for the last card in tarot's Major Arcana. As expected for the final boss, it is incredibly powerful. 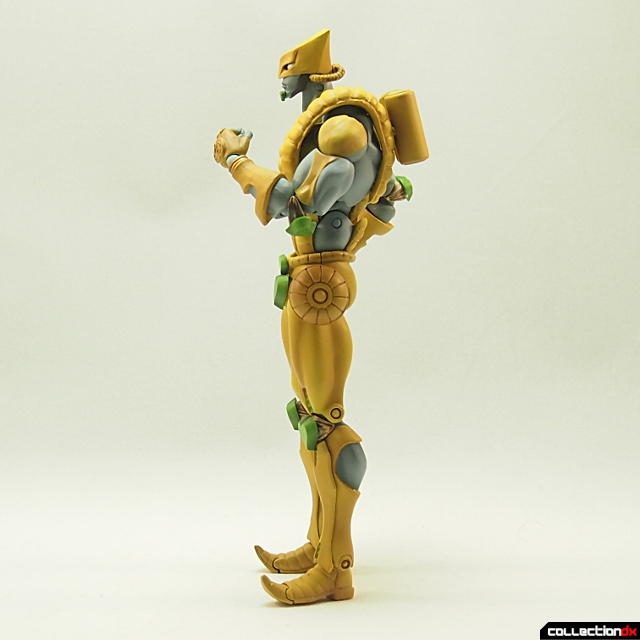 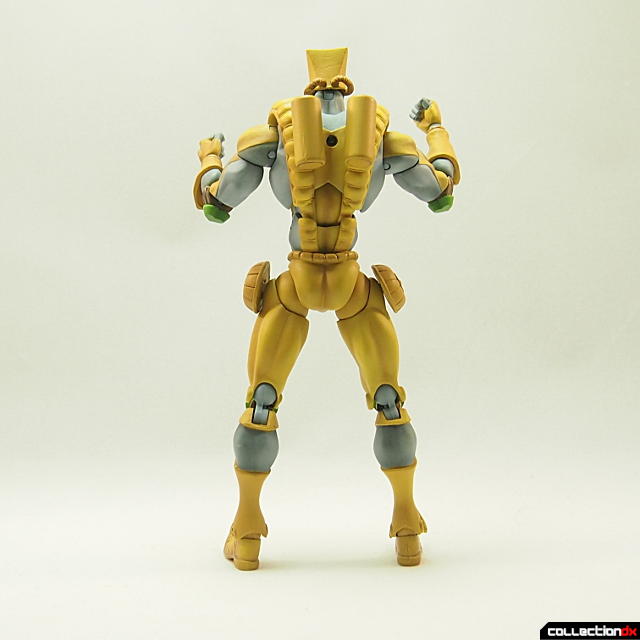 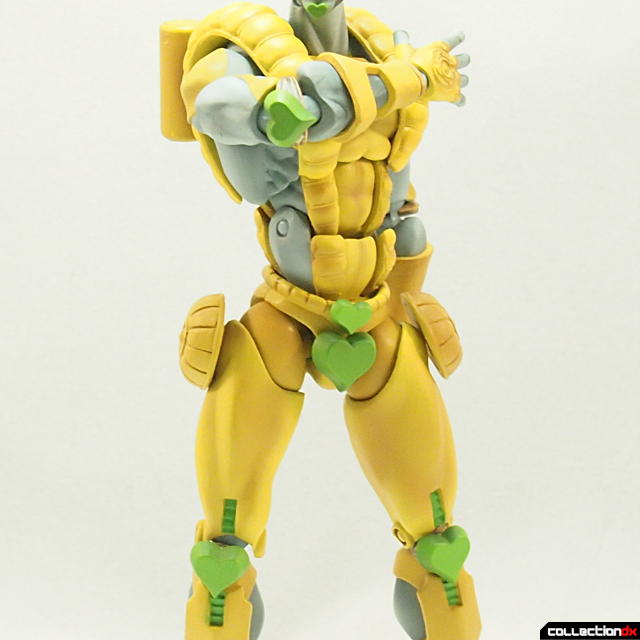 Some of the motifs that are present in DIO also show up in The World, such as the hearts on the elbows and knees. 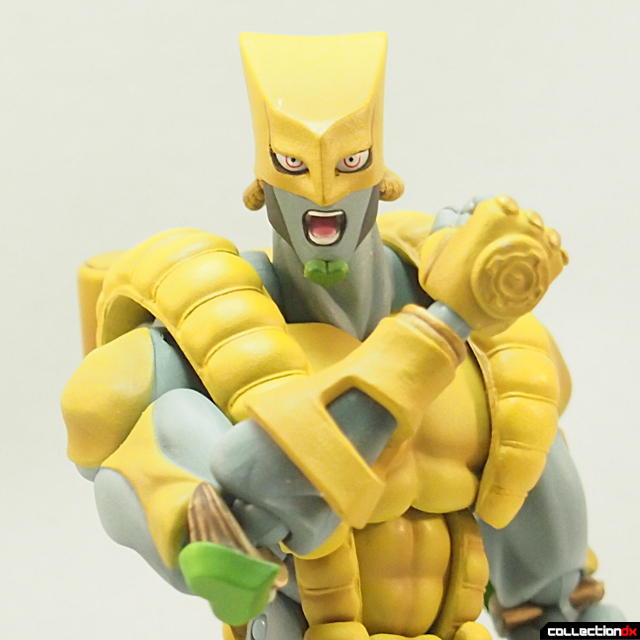 On the back of The World's hands are clock faces, which reference it's ability: granting DIO the power to stop time for a few seconds, with the duration increasing as DIO gets stronger. It's like that episode of Duck Tales where the triplets find a watch that freezes time, only instead of helping the local baseball team win DIO just throws dozens of knives at you.

The World is free from any glaring paint issues, for which I am thankful. The plastic mars easily though, and there are a few areas where it looks like I might have accidentally stuck him with a fingernail. I'm pretty sure some of these indents were present from the factory. 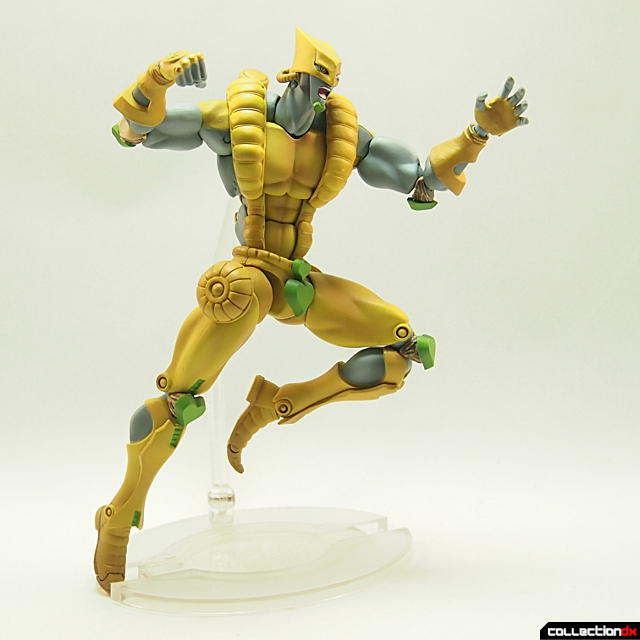 Articulation placement is almost exactly the same as DIO, with the added bonus of bicep swivels and an extra ab crunch. although the ab crunch doesn't move very far. The small shields/bundt cake pans on the hips are also ball-jointed. Overall the entire movement range is generally improved, given than there's less in the sculpt to get in the way. Like many of the SAS figures the elbow bend is limited to 90 degrees, although the knees fare better. It still comes up a little short when compared to similar bodied Stands made later in the line, but it looks pretty good for what you want it to do. 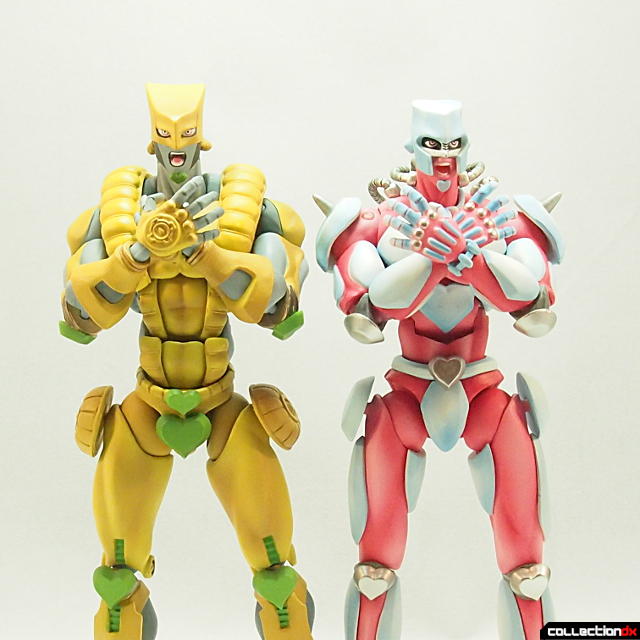 Here's a comparison with Crazy Diamond, who was released a year later. Crazy D is much better at pulling off the ancient Egyptian royalty/Queen II Freddie Mercury pose.

The nylon joints, especially in the legs, are really slick on mine, which makes it almost impossible for the figure to stay standing upright when put in more unbalanced poses (or just in general). Use of the included stand (lower case 's') is a must, although since Stands seem to be airborne or floating more than they touch the ground that's fine. As an aside I don't know if it's possible to improve the friction of the joints because these figures are really not designed to be taken apart, and I don't know if I could get the limbs off without anything breaking.

One of my biggest problems with this line, aside from the persistent QC issues has been the that accessories are either incredibly sparse, or not included at all. The World is a pretty good example of this, as it only includes three extra hands, an extra shouting head and the stand (lower case 's'). 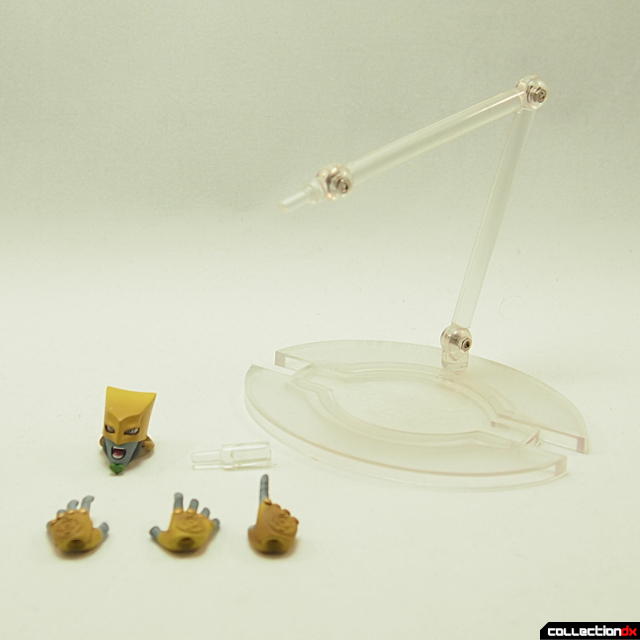 That in itself is not particularly problematic, as I'm sure people prefer having less things to lose, but it doesn't have any effect on the prices. If anything, it seems that as this line has gone on the retail prices have been getting higher, with the same imbalance in box contents. I've run into a problem with this line where the paint on the inside of the hands is too thick, making it really hard/impossible to get them on the wrist pegs. This wasn't a problem with my DIO, but it's definitely an issue on The World.

The World has two cylindrical tanks on his back, and these prevent you from connecting a normal SAS stand (lower case 's'). An adapter piece is included to solve this, but the diameter of the female connection was slightly too small on mine, so when I tried to connect the adapter to the stand it cracked. It's not as big a deal as flaws in the figure itself, but the connection with the adapter is now too loose as a result, and it's much more difficult to set up some of the more acrobatic poses. Actually it would be difficult to do that even if it wasn't broken, as the stand arm isn't quite tight enough to fully support the weight of the figure. There are ways to cheat around that, but it's a little disappointing.

Given their nature, Stands really shine best when paired with a user so let's bring DIO back in. 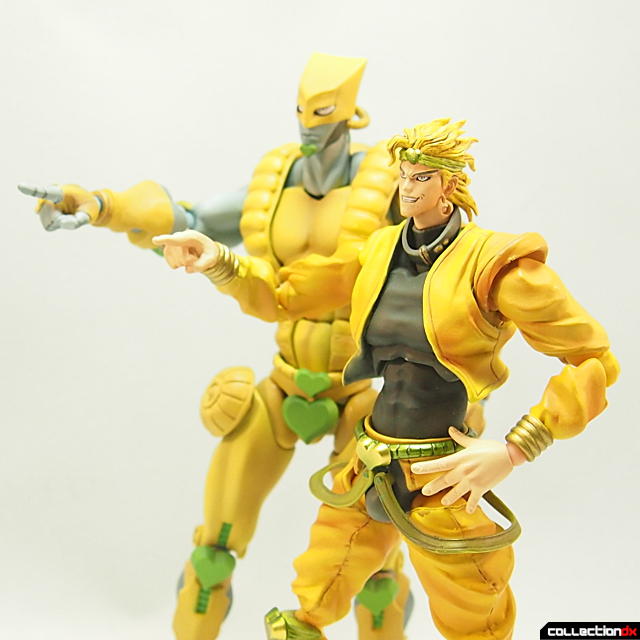 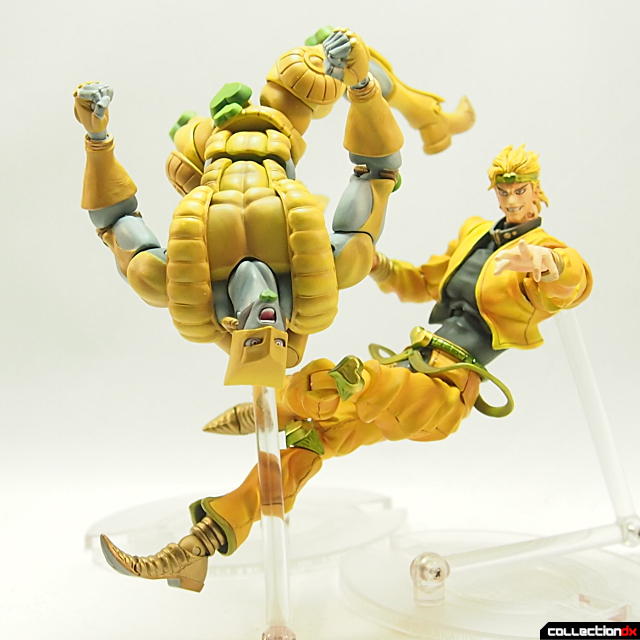 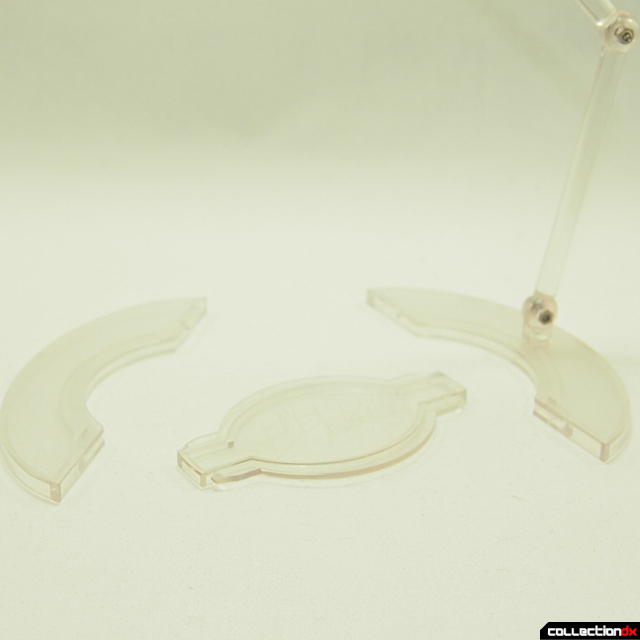 If you have other releases you can mix the parts so that you have a multiple arms on a stand, allowing you to display two figures with one base. You'll probably end up wanting to use separate stands since you have a better range of movement that way, but it's a neat way to display a Stand and user together. 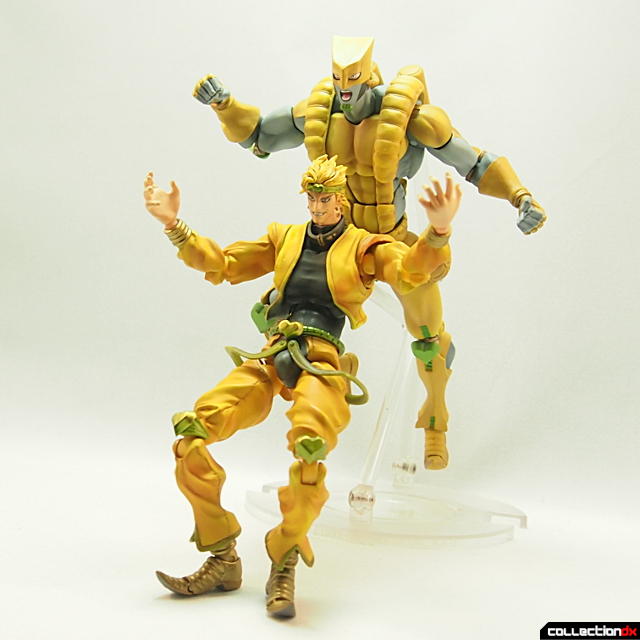 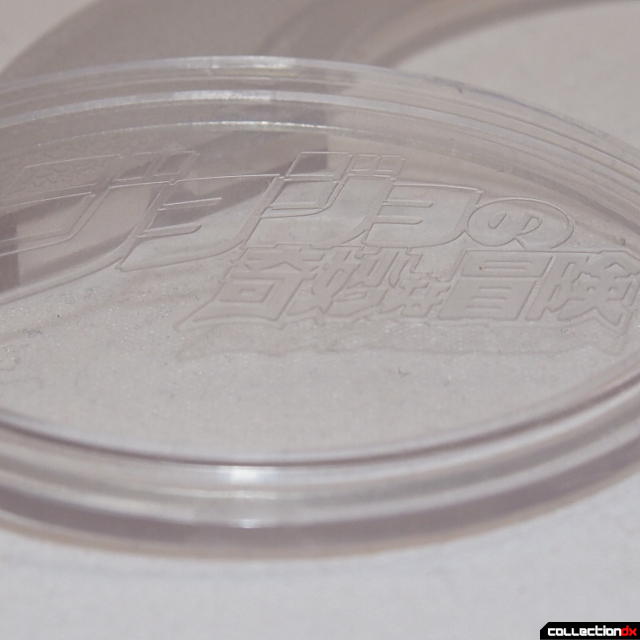 I didn't show it last time, but here's the engraving on the center piece. 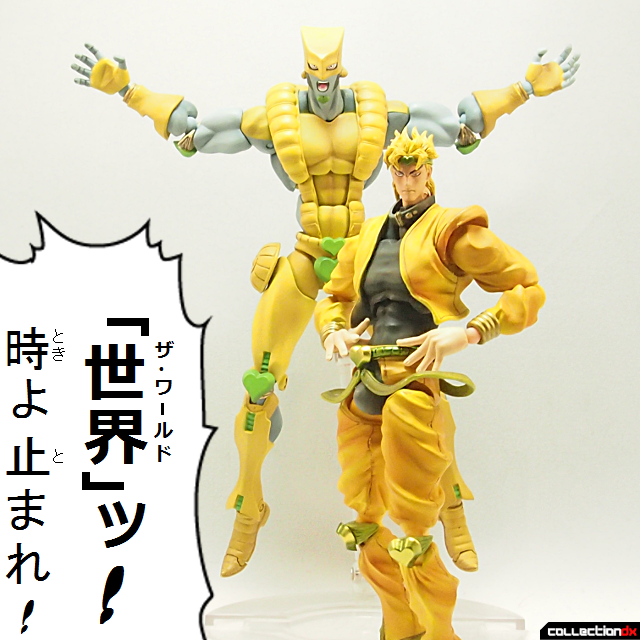 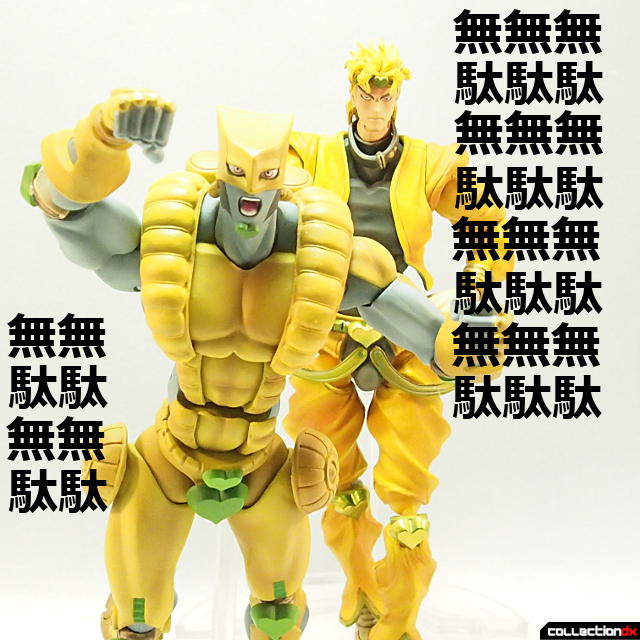 The World is a pretty iconic character, and even with the paltry accessory count I personally think it's worth it. The sculpt just looks so good. It helps that this is another figure that has been re-released by Medicos, and that you can still easily find one in the usual aftermarket shops like Mandarake for about 25% off the retail price. I need to stress that this line has issues (a lot of issues), but if you can find one cheaply I think this figure, as well as DIO are must-haves for JoJo fans.

What's the proper steamroller toy to use when creating a diorama with this figure?

Medicos actually included a correctly sized papercraft roller with the second version of the Awakened DIO figure they did.

I considered going to see what my Toys R Us had to offer in the way of road rollers, but I think I might end up picking up one of the Awakened DIO figures at some point so I figured I'd save that scene until next time. These figures are around 6 inches, so I think that any steamroller toy that was aimed towards toddlers/young kids would work.