In the ever widening world of VF-1 toys, the VT-1 Super Ostrich is a unique variant with its own charms. Taking a cue from the first few episodes of the original Macross series, the "star date" between Hikaru and Minmay during Macross: Do You Remember Love is meant as a callback to when those two young teens were out fighting for their lives in an orange Valkyrie. Unlike the VF-1D, the VT-1 is a dedicated trainer much like a real life example of the T-38 Talon, which is the training version of the F-5 Freedom Fighter. For a little boy with a copy of Clash of the Bionoids, this entire ordeal is summed as follows:

"OH NO! THIS IS A TRAINING AIRCRAFT!" From then on I was doomed. 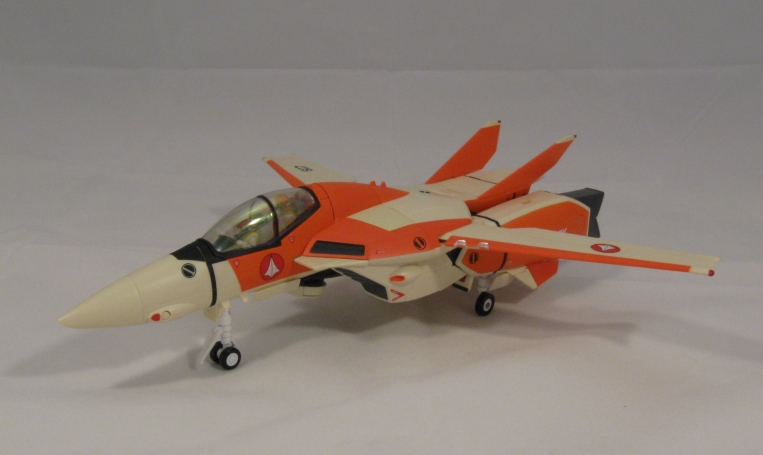 Yamato's new VT-1 is a great execution of a unique design. The basic fighter mode looks right and feels good in the hands. The changes to the design are not immediately apparent, but once you scratch the surface you'll find at least 20% of this toy is all new parts. The first being a new nose section with the VT-1's signature raised seating style where the rear seat is higher than the front. As such, the chest plate has also been redesigned to account for the new nose section. 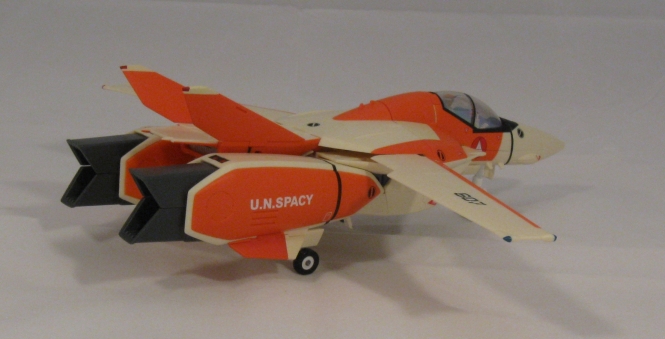 From the rear we can see the redesigned tail section with features new fixed tailfins and a hinged rear flap. These are used when the backpack is folded against the top of the aircraft. 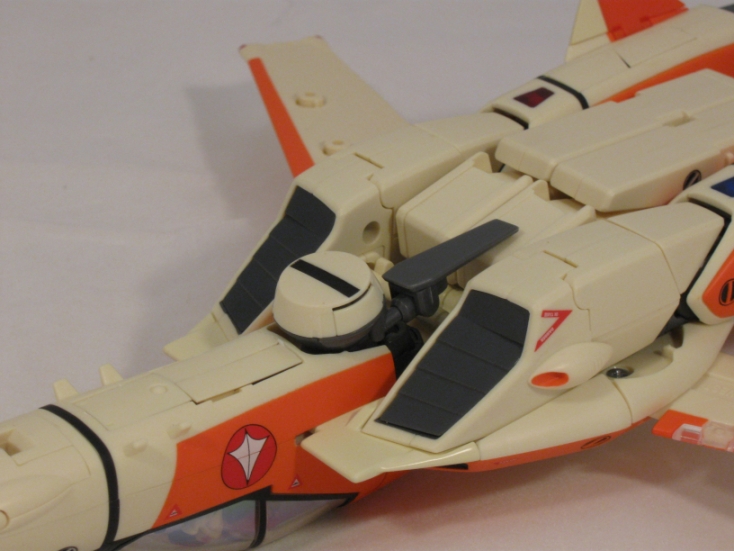 This version of the VT-1 allows for the head to be tucked away. 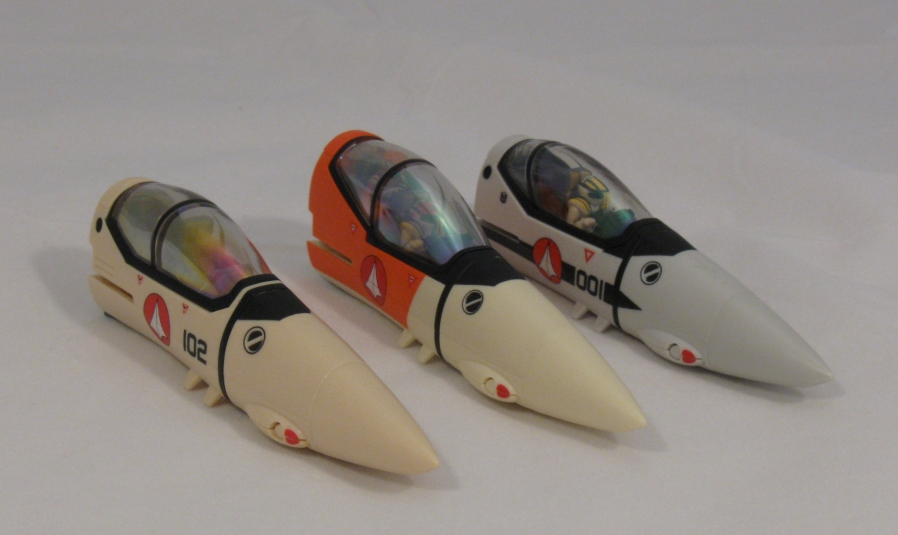 Here is a picture of the three Valkyrie nose section types. From left to right are the VF-1D, VT-1 and VF-1S. Like the previous two releases, the VT-1 has a lot of tampoo markings which make the toy very presentable out of the box. 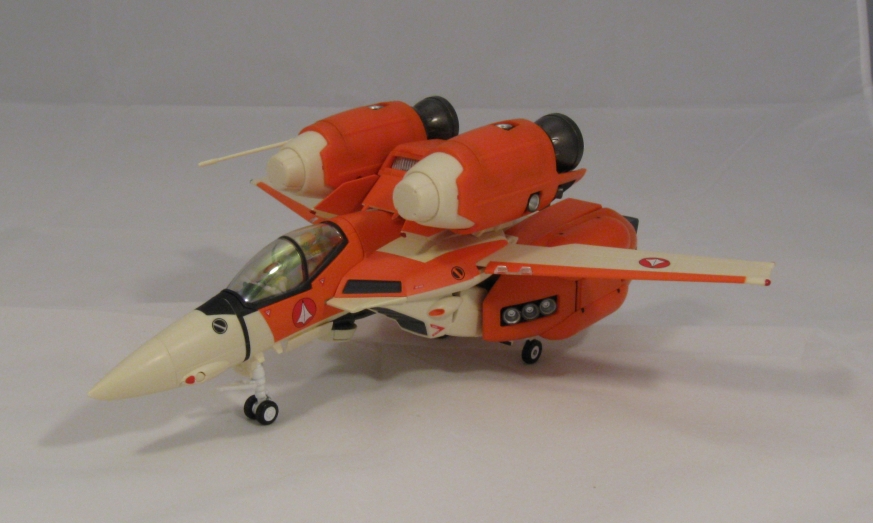 After a few quick snaps, the FAST packs are installed with little effort. 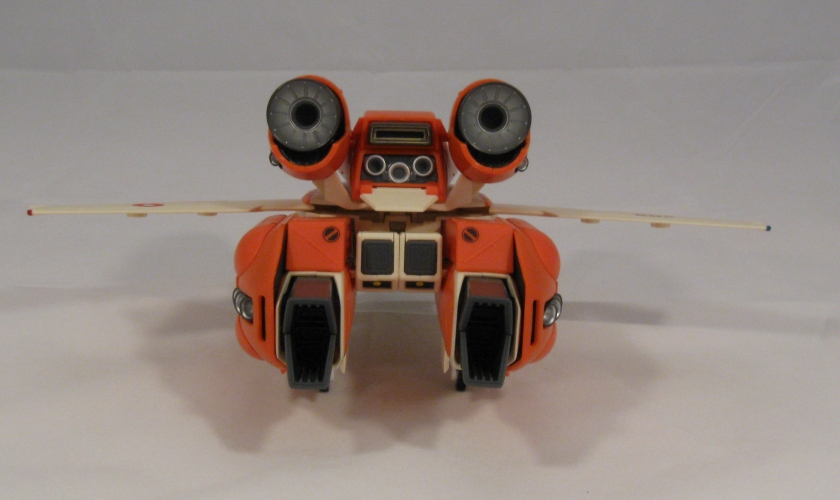 Check out the engines on this ostrich. 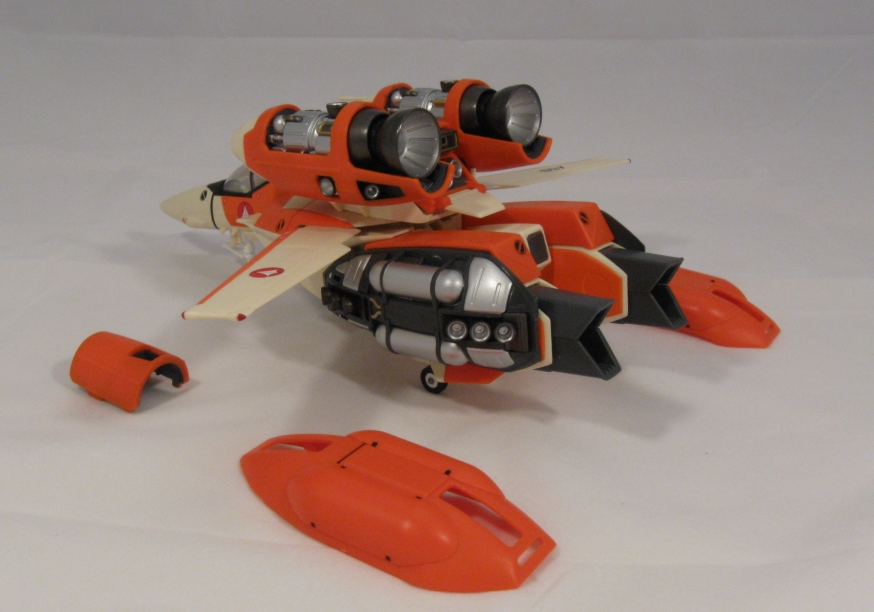 Both the dorsal boosters and the leg parts feature removable panels. These panels are easy to remove yet at the same time, do not fall off with the slightest touch. 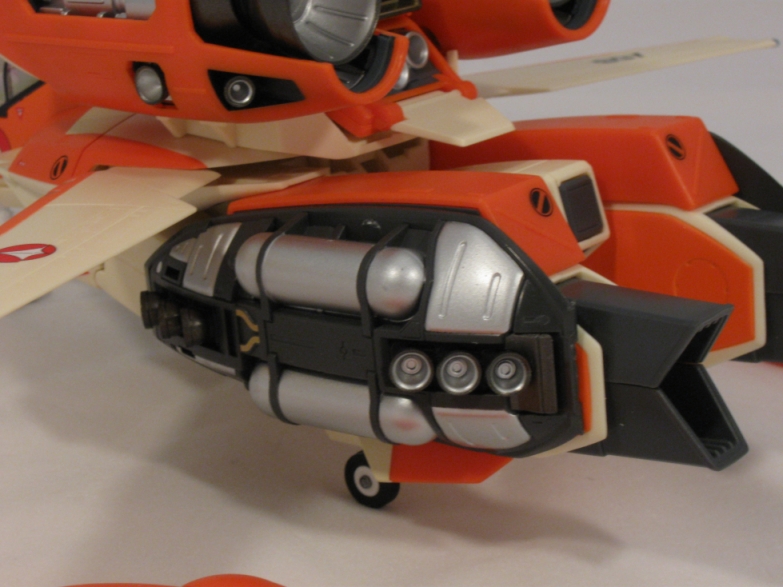 Here is a close-up of the leg detail. 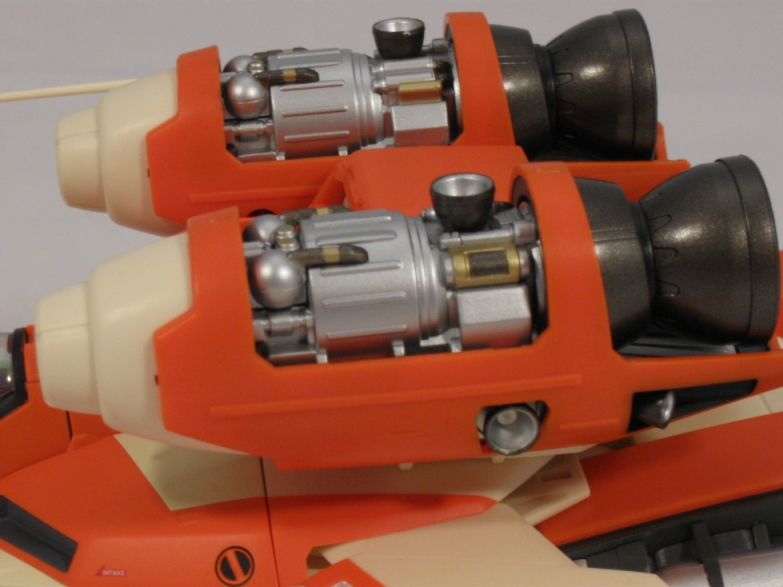 And here is a close-up of the booster detail. 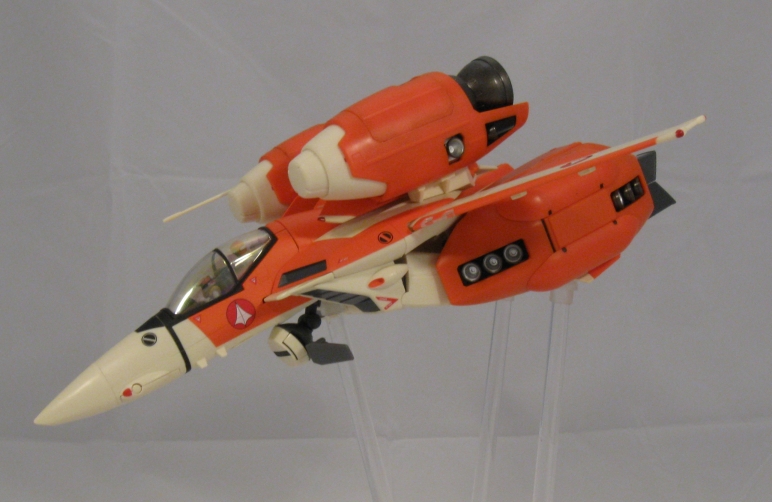 This toy does include the usual Yamato display stand adapters, but I find a Flexdisplay stand suits this toy much better. 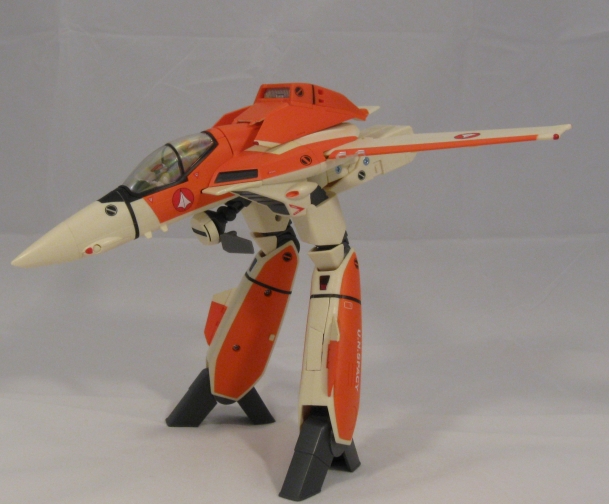 The GERWALK mode of the VT-1 is quite distinct. It is mostly shown with its arms retracted and the hump created by the backpack evokes images of a speedy bird. 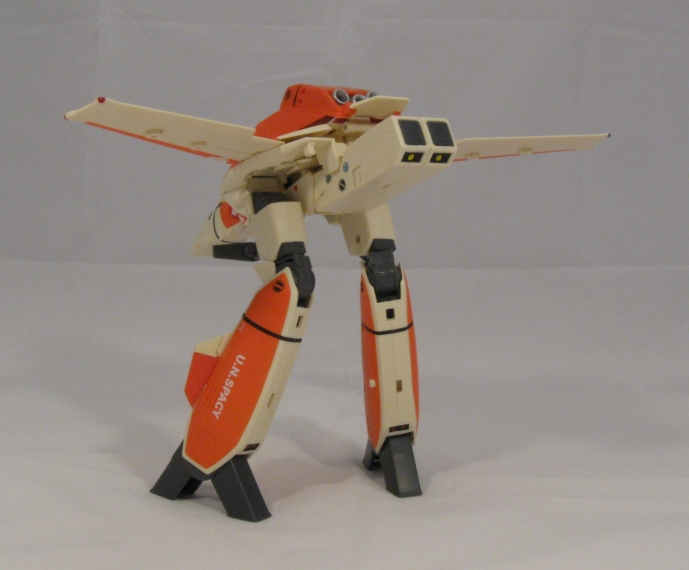 Owners of old Macross artbooks are familiar with this pose. 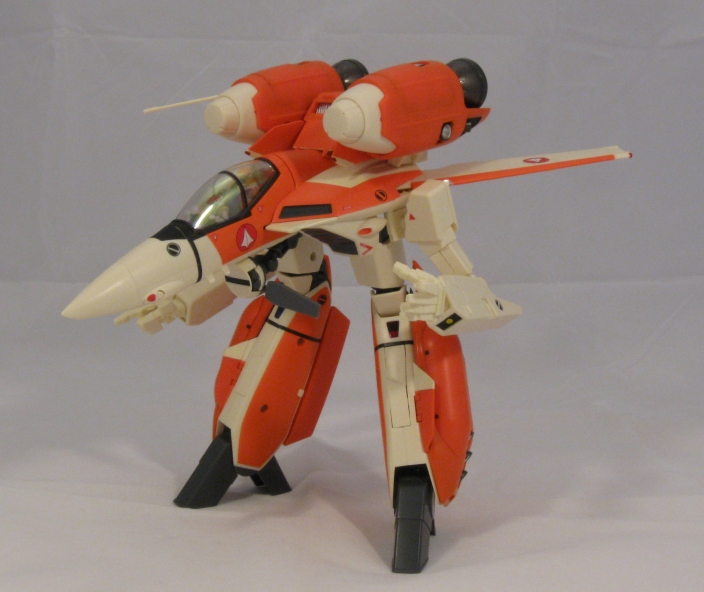 This is the most we ever see of the VT-1's transformation. Super GERWALK is probably its most notable appearance in the film. 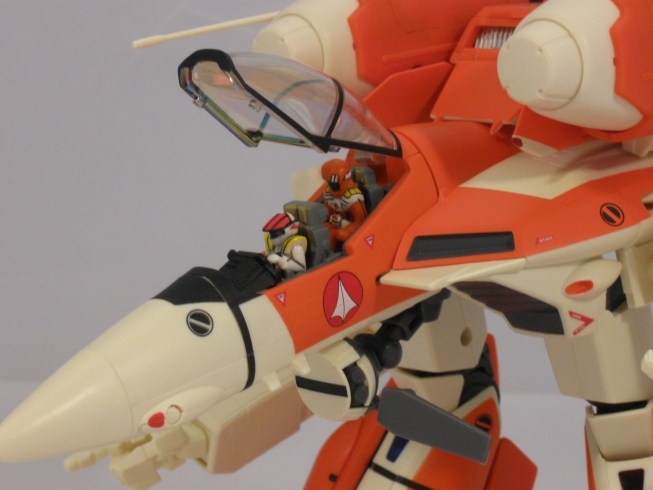 In the cockpit we find a matching pair of Hikaru and Minmay (or Misa in a spacesuit) figures. 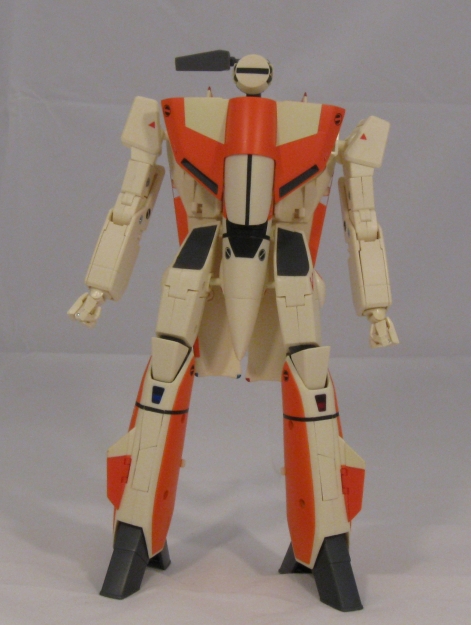 While the VT-1 is never seen in Battroid mode, it was always meant to have one. I have chosen to use the fixed posed hands for these pictures because I liked how expressive they can be. 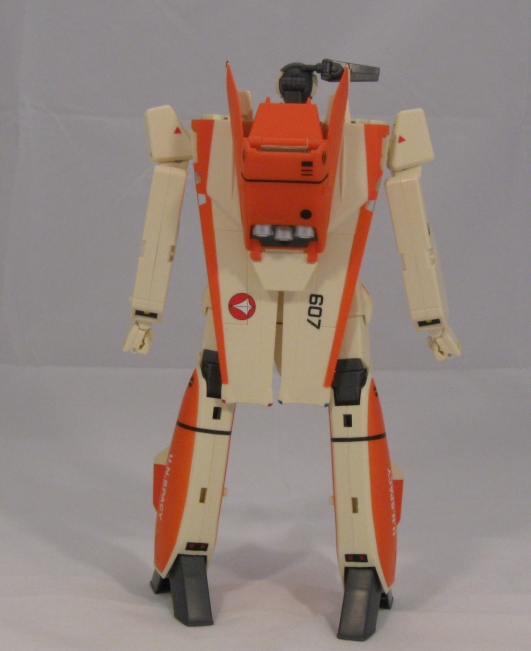 There are an additional pair of locking clamps on either side of the tailfins in Battroid mode. I did not use these clamps as I feel they're really redundant and difficult to extend without a small tool or sharp fingernail. 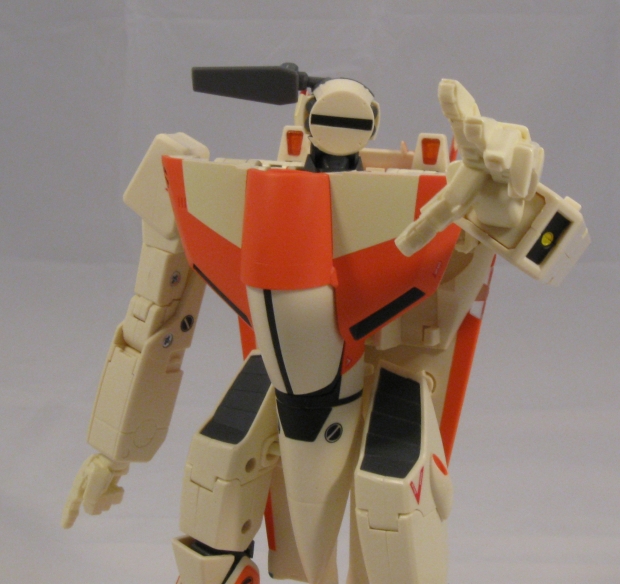 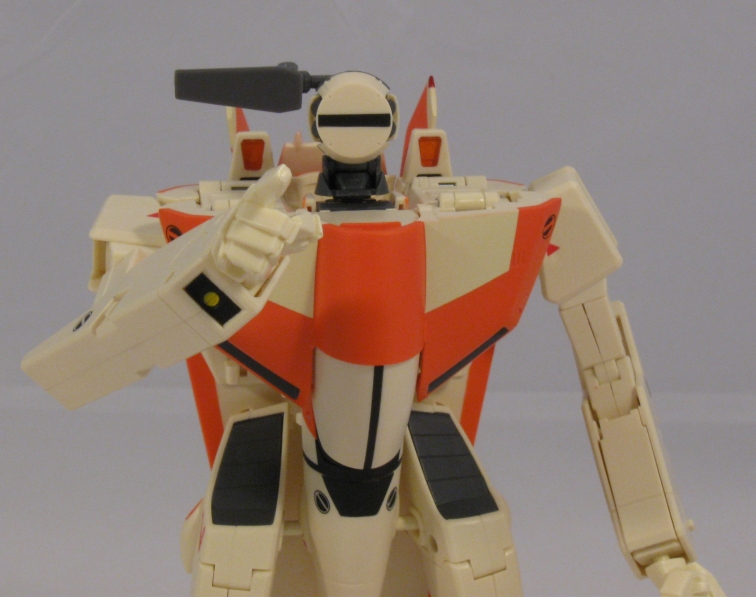 I want you for UN Spacy! 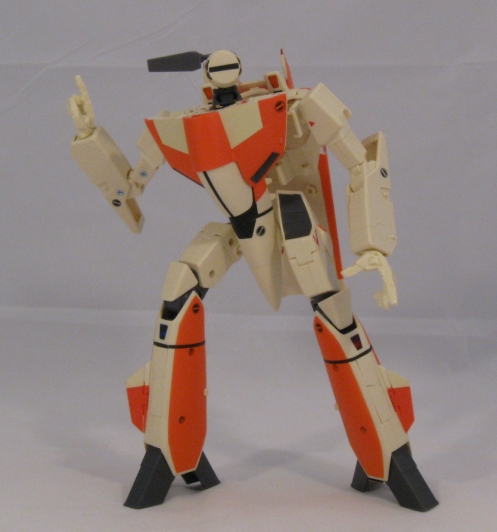 I say chaps, I am armed with a nasty fingergun 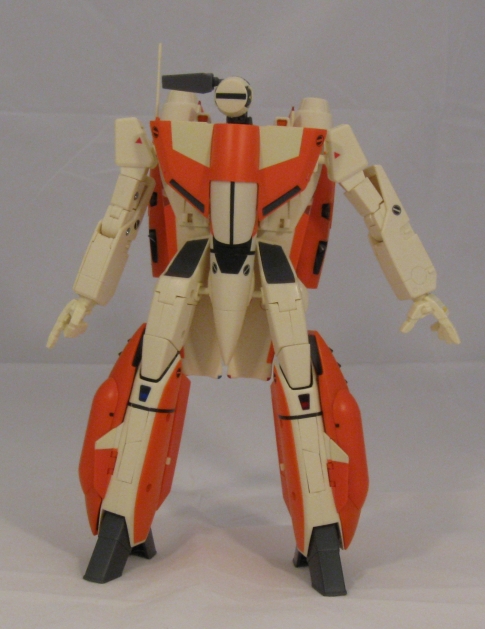 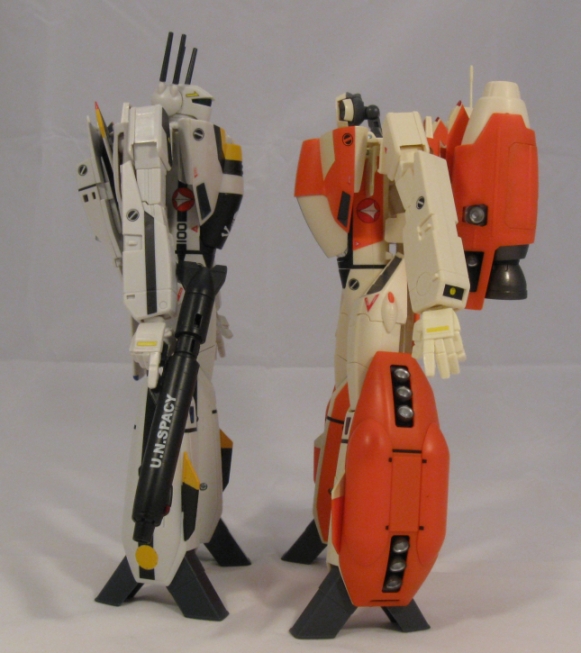 Here you can see the fuller bust line of the VT-1 in comparison to regular VF-1. 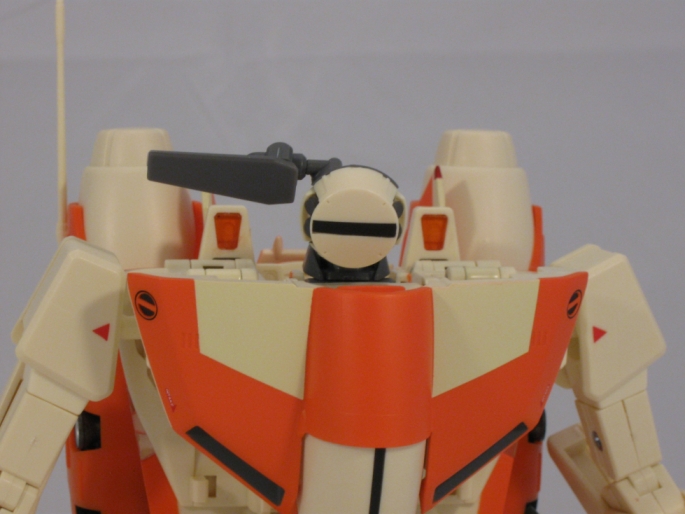 Really, the VT-1 is another winner from Yamato. Its a great design executed almost perfectly in toy form. Yeah it is another VF-1, but the Super Ostrich has a lot of charm.

24 comments posted
Wait- that was the dubbed

Wait- that was the dubbed version for "Clash of the Bionoids"!? I thought it was just a bootleg fan-sub from Korea!

Thanks for the side-by-side comparison of the three VF-1 noses; that helped explain a lot.

That's the funny thing about VF-1s- they don't lend well to doing the splits.

I love the design, but the lack of a robot head is a big down.
Why wasn't the head that the tv training version had included?

Because this is a toy of the VT-1.

And the VF-1D is not a trainer. Its like the F-16D, which is a two-seat F-16 that has some different features but is still a combat airplane.

I just wish I had the time to sit down & give these toys the paint job they deserve. Can someone please tell me where to order the Flexdisplay stand that's mentioned here. The Yamato stand is o.k. for gerwalk mode, but I never liked the method used to display fighter mode. Appreciate the excellent review.

Nice review. Extra points for including the same quote that popped into my head when I saw the toy ("training aircraft").

HLJ.com sells these stands, Rigas. Not sure about domestic suppliers.

Thank's for the info Japester.

Laftoys is the supplier of these stands. They are Lost and Found Toys. They even offer a set deal of all three types.

Thank you, much appreciated.

Damn it, Flexdisplay stand does not bring anything up in the search. Every variation I try is a no-go. Is there a specific name for it that I can try?

Not sure about posting links to shop sites that don't advertise here, but the link is to the specific page for the stands, not the toys they sell. I have dealt with them before and they are a good place.

As for the toy, that whole business with the tail fins is new to me. I guess I just never noticed that it's always been that way. Again, like the forthcoming Elint-seeker, I'm not sure if it will be as well received as expected. What made these two so desirable was their rarity, not so much their looks.

The Ostrich at least features heavily in the movie, my only want for this piece would be a non-space suit Misa and Hikaru figure as well for the stranded bit. Although maybe Yamato has plans for a limited edition with damage and accessories for that scenario.

Thank's to everyone that helped. I'm glad I finally have these stands coming, they always looked good in photos of peoples collections that I had seen. I'm one of those people looking foward to the Elint seeker, love the way it looks in gerwalk mode. Just wish it was a little less expensive.

new site to order the stands from lost and found toys

You know,I think it really speaks to the quality of this movie that even when it was chopped up and given a dub track that borders on comedy,kids still loved it,and as adults have nolstalgic feelings for it.
It's just such a well made movie that it's inate goodness shows through no matter what you do to it.

Very well put. I agree completely, I was astonished at the quality of Macross when I finally saw it, compared to the rather shallow & clearly aimed at children Robotech rendition. Which was the only version I had seen up until recently. Most of my nostalgia stems very srongly from Robotech, which made a huge impression to my 5yr old mind at the time. It was truly cutting edge, with mech designs that are still fascinating to this day.

Macross:DYRL really opened my eyes to how beautiful animation could be. I had grown up on Battle of the Planets and Starblazers as a kid in the 70's, but neither show had the level of detail and polish of Macross. Seeing it was like discovering a whole new world of sci-fi. LOL

In fact, when I used to talk to kids at anime conventions, and I'd hear them complain about how they "need" to pirate anime because a boxset of 20+ hours shouldn't cost more than $10, I'd mention to them that in 1985 I had to chip in with two other friends so we could buy Macross:DYRL from a shady dealer at a con. It was a third generation VHS copy....and cost us $80. And we were the coolest kids on the block for owning it! ^_^

(The above run-on sentence is an homage to the wonderful dubbing of the 60's and 70's. LOL)

So you're arguing against piracy by telling them about a time you bought a pirated tape?!?

Yes, buying a bootleg in 1985 (pre-internet, with absolutely NO way of obtaining a legal copy) is nearly identical to teens who don't want to click a web site link or go to Best Buy and buy a legal copy for pocket change.

The scary thing is, kidnicky, this is the first time someone has missed the point. None of the teens ever focused on the piracy point of the story. They understood we were talking about price and how relative it all is.

I remembers those days getting anime back in the early 1980's. You had two choices: Buy an original VHS copy of DYRL new for $120.00 from Pony Toy or Books Nippon or hit up a comic book convention a get a copy for $25.00+ for a second and third generation copies.

I bought my copy of DRYL for $25.00 at a comic book convention in 1986 at the Disneyland hotel and I ws luckily it was a very nice copy but it had no subtitles and I still own it to this day.

If you have to remember $120.00 was a lot of money back then, I remember my mom chewing me out because my dad bought me a $25.00 Spiral Zone figure! That much money wasted on a toy! Lol.

I only buy original copies of DVD's now and don't advocate bootlegs at all with the exception of its not available but I will quickly upgrade when it has an official release as I don't like taking money from people who worked hard on their projects. But How else am I going to own Stanley Kubrick's Fear & Desire, Tarintino's My Best Friends Birthday, Ralph Backshi's Coonskin & Hey Good Looking, Hitchcock's Elstree Review, Billy Wilder's 5 Graves to Cairo and Coppola's You're a Big Boy Now. As soon as these have official releases I will be there the first day they are released! It's really in the hands of the studio.

So yeah guys, how about that toy.

We're afraid to talk about the toy for fear we'll be harshly corrected.

I like it, and it's real pretty, but I don't think I'd shell out for it... DYRL just doesn't have that effect on me.

I like the Elintseeker myself. I actually also wanted this one, but it just looks to much like a coast guard vessel.

Hey I was just kidding around with my comment,I could care less if you do or do not pirate anime.