I feel that the VF-25 represents a culmination of all the little quirks and details seen in Variable Fighters over the past 25 years. One of the most memorable aspects of Valkyries is the full armor packs that encase the once sleek robot in loads of bulky armor. The VF-25 is the fourth Valkyrie to have a full armor set with the others being the VF-0, VF-1, and the VF-11. The VF-25's APS-25/MF25 armored pack owes a lot to its predecessors in addition to obscure designs like the Stampede Valkyrie and the Star Child. It was only a matter of time before we would see an Armored VF-25S in Bandai's Deluxe Macross Frontier Valkyrie line. In fact, I'm surprised that we didn't see it sooner since the Armored VF-25S is seen right from the get-go. Honestly it makes me wonder why Bandai even bothered with the first release. It might be worth it if Bandai eventually releases a separate accessory pack but right now the armored set is much more appealing. 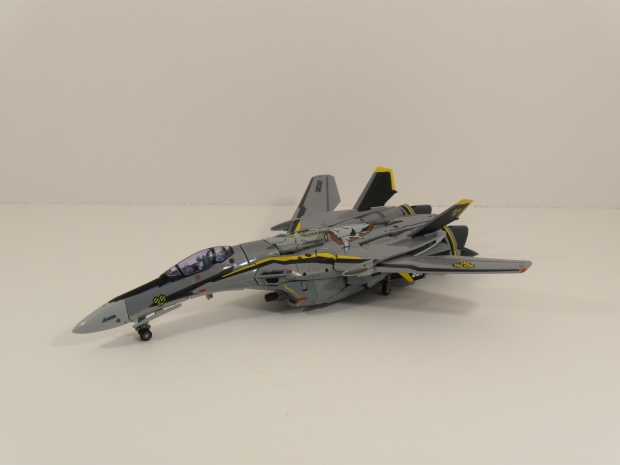 The VF-25S's fighter mode is largely unchanged from the first release. The only new addition is a set of new hip parts that have holes for attaching the hip armor. These come already attached to the hip armor so you also get a set without holes attached with the toy. Sadly there isn't much you can do with fighter mode except swing the wings and extend the landing gear. It really needs some underwing stores to make it come alive. 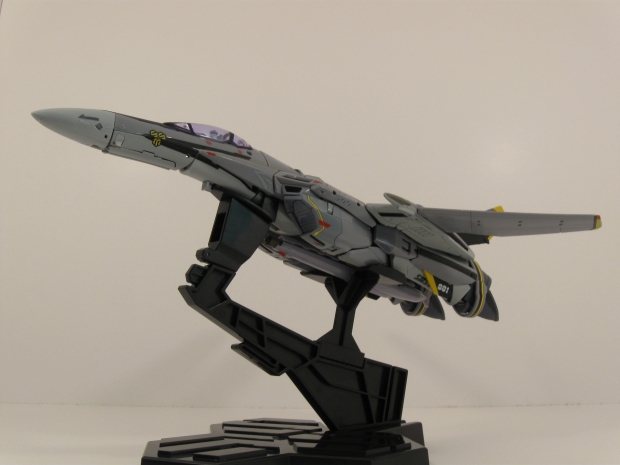 This is my first experience with the DX VF-25's infamous display stand. While it is less complicated than the stand from the GFFM Zeta Plus I reviewed, it is also a lot uglier. I understand the use of diecast in the ankles makes this toy a little unwieldy for a stand but Bandai's solution is just poorly executed. The toy plugs in at the front of the stand while the rear end simply rests on the cradling piece. Nothing lets you adjust the pitch or bank of the plane so you're stuck with it at this mediocre "gate guard" angle. 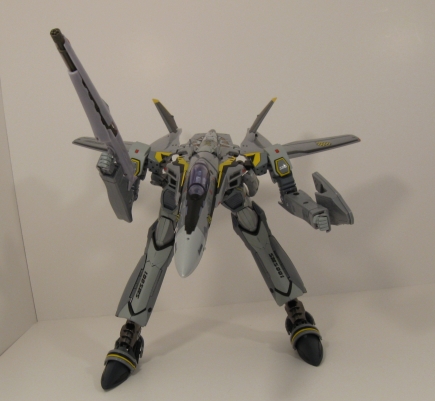 GERWALK mode is also king of lacking. While it is possible to achieve a proper A stance but leaving the intakes unlocked from the upper body, the lack of swivel joints in the knees limits what you can do in this mode. The rear end is also susceptible to sagging. 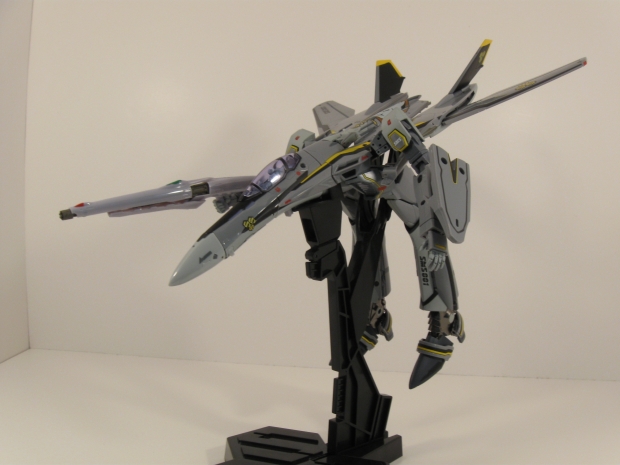 In order to attach GERWALK mode to the stand you must plug the intakes into the front fuselage which leaves the legs in an awkward straight position. The angle the toy rests at looks terrible and with the legs locked in place there's nothing you can do to make the toy look more dynamic. 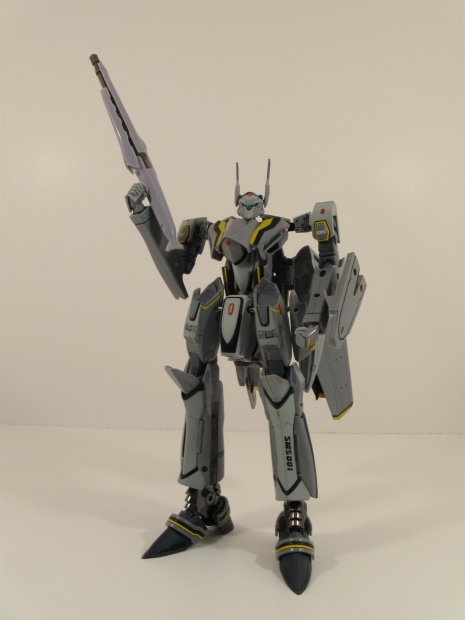 Battroid mode is the best mode out of all three for this toy. The original release of the VF-25S was plagued by a stubby neck. Bandai has included a spacer piece in this release as their fix. While it does breath new life in the toy, the piece cannot be left in for fighter or GERWALK mode. It makes me wonder why they didn't just re-design the head or neck. 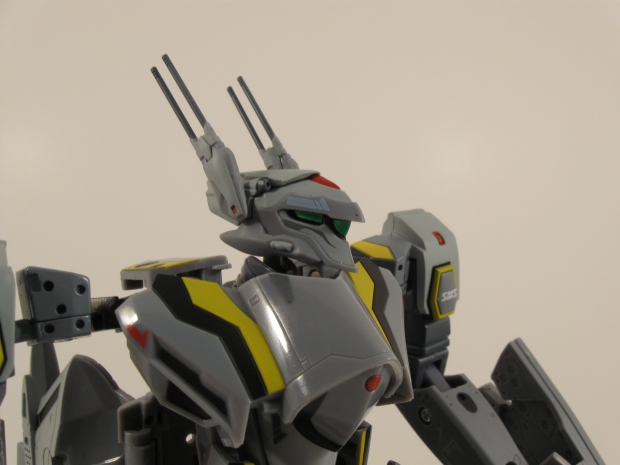 Regardless of my complaints, the new neck piece really improves the look of the toy. The VF-25S's head is one of my favorite head designs in Macross. The paint job on this toy is sharp and nicely detailed. 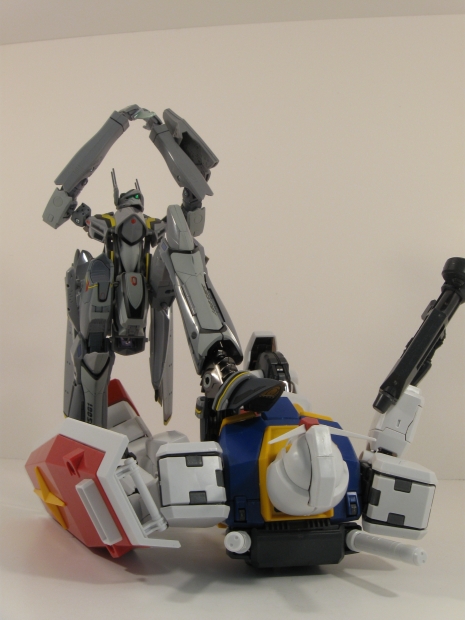 The VF-25S possesses a good amount of articulation and as a 1:60 scale toy it provides some interesting opportunities for interaction with robots of the same scale. 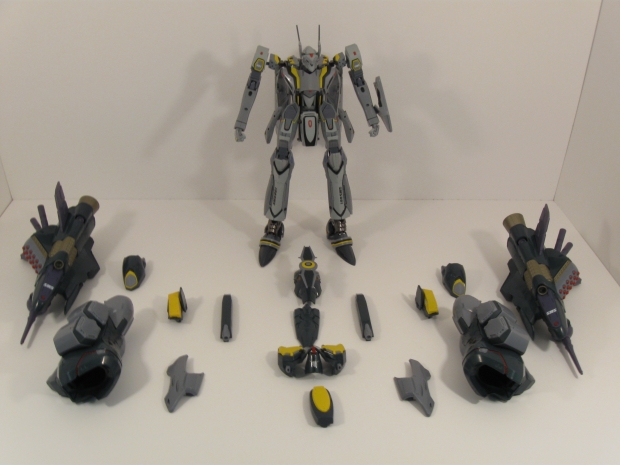 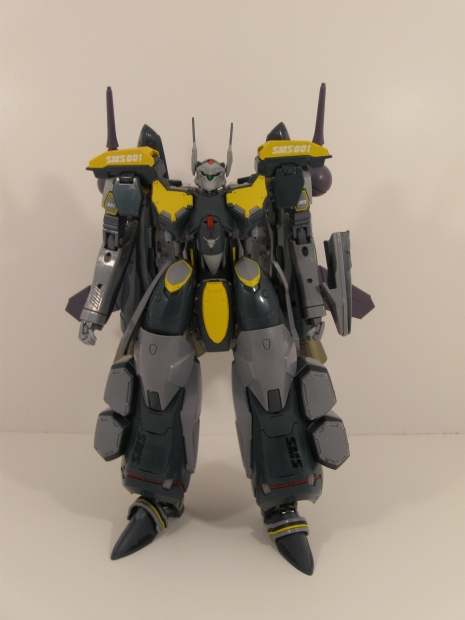 Snapping the parts on can be a bit of a chore with satisfying results. For more details on the armoring process please skip ahead to my video. 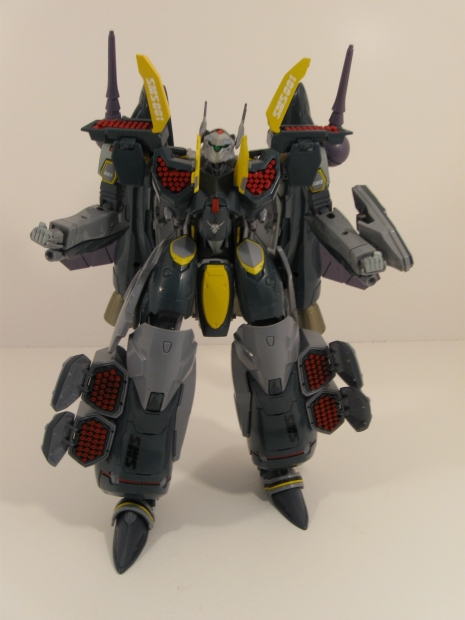 The Armored VF-25S boasts an impressive 264 missiles across the various launchers on its body. My only complaint is that there should be paint filling the spaces between the missiles so that they don't look like one solid part. 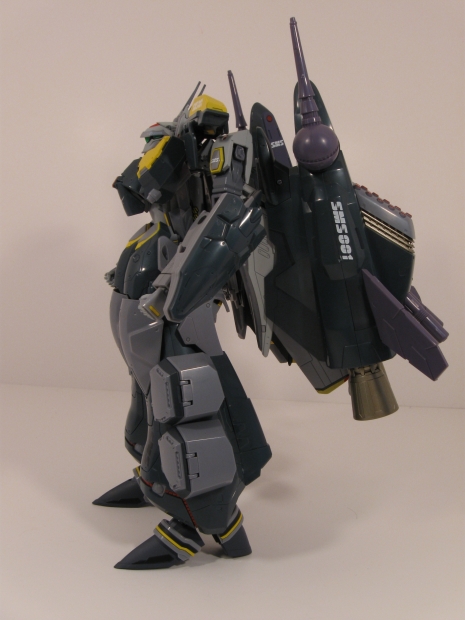 This side view shows that the toy can stand upright even with the added weight although it is a little touchy. 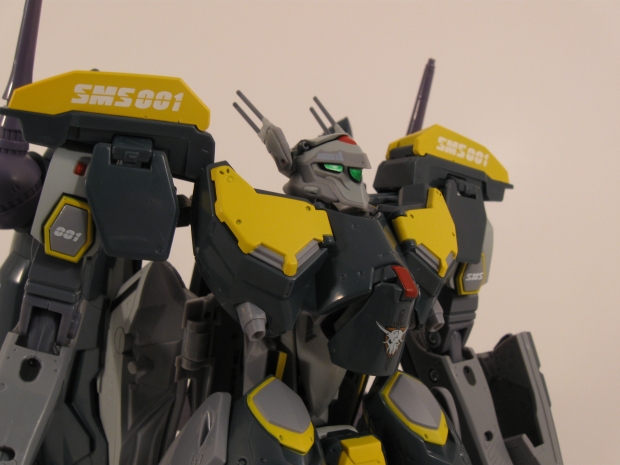 The Armored Battroid is fairly detailed with most of the major markings represented by tampoo printing. However, not all the markings are present and there is no decal sheet to provide these markings. 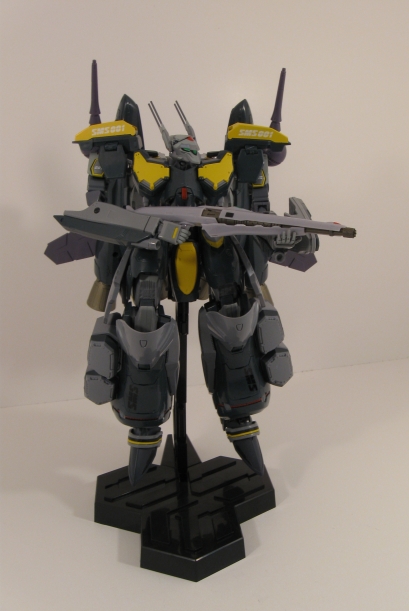 In this form, the large stand actually works well. Unfortunately it is difficult to splay the legs out due to the added weight. 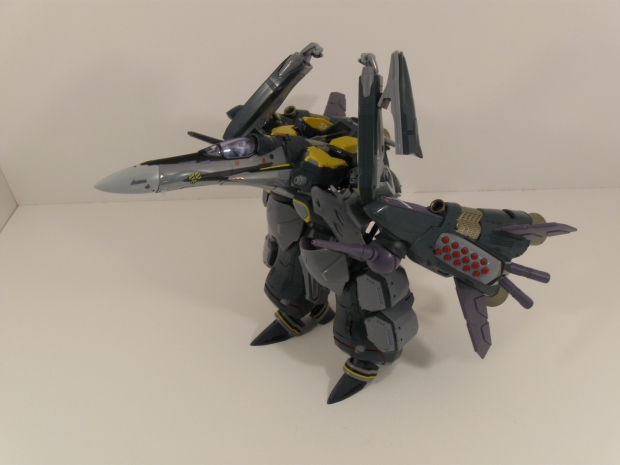 For me, Armored GERWALK is a complete disaster. Bandai thought an extra backplate for securing the wings was a good idea. This backplate also has two balljointed struts that connect the back of the GERWALK to the legs in order to spread the weight. I couldn't get it to work at all and my patience for this toy's GERWALK mode ran out. 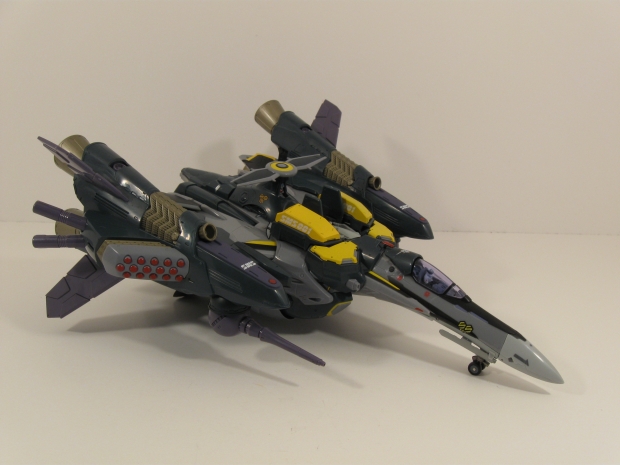 Armored fighter mode fares much better. Looking like something straight out of Ray Storm or Image Fight, the fighter mode evokes the image of a real one man dreadnought. The armored leg parts feature their own landing gear so you can display this mode without the stand. 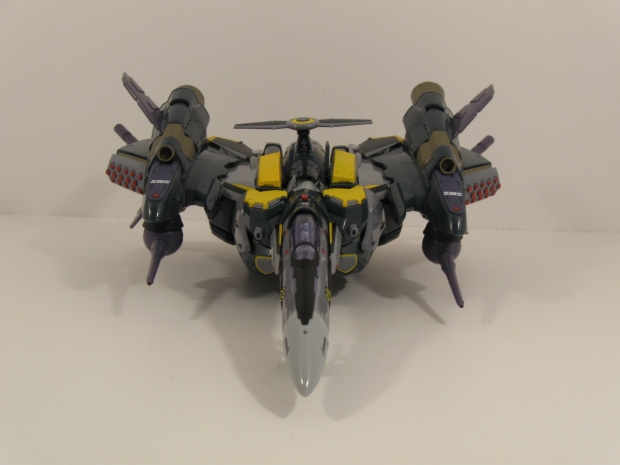 The cannons on the booster and pivot and swivel. The booster nozzles are also movable. 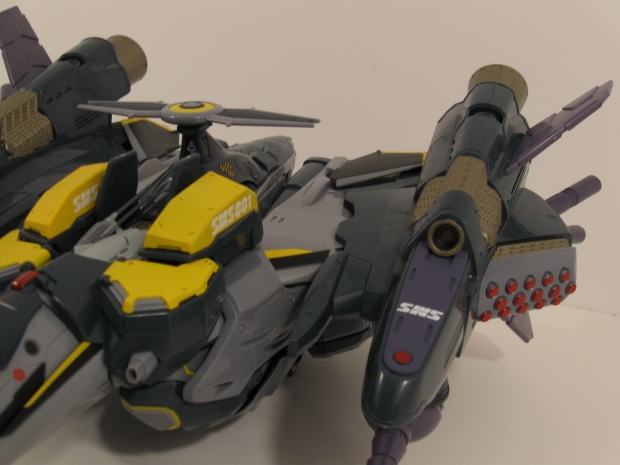 Again the detail in this mode is fairly well executed. The colors are especially sharp and there are not apparent defects. However I have found that removing the armor has scratched some of the markings of the base toy. 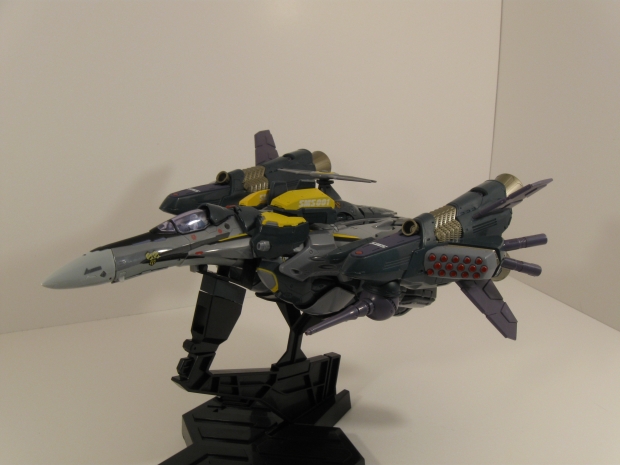 An additional spacer piece and cradle extensions are provided to display the armored fighter on the stand. Again this time the stand works with the toy instead of against it. When its all said and done, Bandai's deluxe Valkyrie have been consistently underwhelming. As I look at this toy and compare it with Valkyrie toys form Yamato or even the GFFM Zeta Plus toy I reviewed I can't shake the feeling that this is just good enough. Despite the price, nearly as much as the Zeta Plus, I just don't see the same level of engineering and craftsmanship Bandai that made Bandai the leader in the robot toy industry. I love the design of this Valkyrie and the toy satisfies me but I really wanted Bandai's A game on this release and I felt that if ever there was a version of this toy that they had to get absolutely perfect it was this one. I don't feel that they have redeemed themselves enough to make this toy for anyone else than fans of the design and that's a real shame.

I was holding out for this release after I cancelled my pre-order for the "naked" Ozma of the initial release. Now it appears it's little more than some extra plastic on a still flawed toy.

I enjoy the new show, but with Bandai failing at something they really should be excelling at, I don't plan on getting any of the high-end toys.

I'm all over the Tamashii Q-Rau though.

I think it is because its not gundam their main cash cow.
They just put a spacer for the head instead of redesigning? That's just lazy and cheap.
Makes me want to wait for yamato to acquire the license and then buy one.

I've always been on the fence when it comes to the VF-25. The VF-25 is just so much more delicate and intricate compared to its predecessors, and I can never seem to find the balance of it; like the design was focused more on making it a believeable aircraft than it is a mecha. I liked Macross F, but the designs never sat well with me. The reviews of the Bandai toys based on them confirm much of my fears from the translation from digital/paper designs to plastics, its not about Bandai being lazy because its "not a gundam."

I've looked at the model kits and they don't look too bad, but its just the price of them that sets them far out of reach. Then again its a Valkyrie, which instantly increases the price whether it be a model kit or a fully built shelf display.
-------------------------
Rob
The Gundam Model Guy

This toy is sharp I love the design, nice color scheme, smooth lines, cool typography "SMS0001". Many missiles! Nice and to the point review.

I just want to add that the 001 on the toy's shoulder has chipped off. Bummer.

Image Fight FTW. You know there was a gashapon a couple years ago?

Believe it or not, despite the nerd fight in the Luca Valk thread, I actually love the scrolling shooter game allusions here, Andrew. I've always been a fan of those designs (and also the Mobile Armors in Gundam), so the armored fighter looks really cool to me.

The other modes, I can leave... And it's too bad the toy seems pretty meh.

As I said on TBDX, I'd love it if someone made 1/100 non-transformable sets of figures of these. Like, imagine a box containing a set of 3: 1/100 poseable battroid, GERWALK, and fighter. Non-removable armor...only the gunpod would come off. They could make a naked, armored, and APS-25 version for each. Fairly inexpensive. Rugged. Simple.

Revoltechs, maybe? Or Yamato's GNU-Dou (if they were able to secure the license).

As sexy as it is prohibitively expensive.

Thought Atom's review was fair, I really liked the VF-25S' design and was lucky enough to secure one that is unopened, brand-spanking-new, mint-in-box...whatever we call it nowadays.

I was totally satisfied with it as of course Atom's review set my expectations at a mid level. Until I noticed one of the landing gear hatches on the front end of my Valk (on the nose) had one of the thin "hinges" that secure it to the underside cracked.

I paid a premium for an unopened specimen so I felt my heart sink...

In any case I was wondering, is there any way to secure a replacement part from Bandai, has anyone tried this? I mean, I love the toy, it's exactly what I expected except for this apparent QC issue.

Or if not, has anyone tried "fixing" QC issues on their toys themselves? I am thinking, since the "hinge" didn't crack all the way through, I might be able to cut the corner of a credit card to the same shape and slip it between the two hinges with a dab of super glue. Of course securing a replacement part is my priority.

Damn, I am not really disappointed but I just kinda feel helpless. Don't want to let go of the toy as it's my favorite Valk design and I had spent months tracking down an unopened one.

By the way, nice review Atom. Hope anyone can help.

Sorry, been reading too many reviews, got the authors mixed up.

VF5SS for this one--thanks for the review dude. :D

Atom for the other Valks he reviewed. :D