Bandai! They truly make some of the most awesome toys and collectibles on the planet. So when they announced that they had the license to the new Macross franchise to make toys I was ecstatic. I mean they're Bandai, they turn out SOC's, SIC's, SCM's, Soul SPEC's and ChogkinDX's with such consistent and exacting quality what could go wrong? 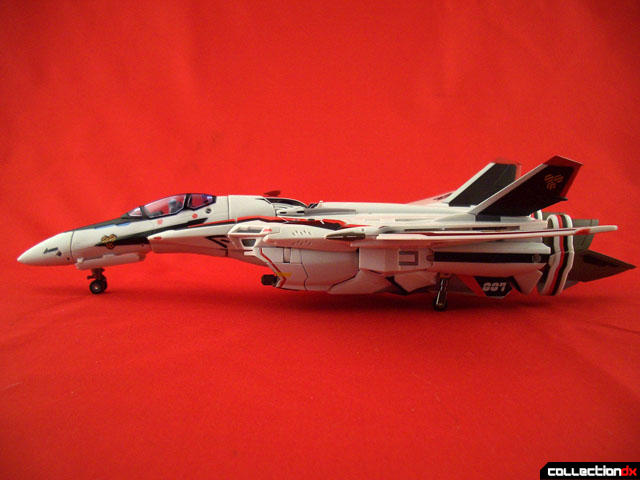 Well color me surprised at how disappointed I actually am with their new series of Chogokin DX VF-25 Messiah's. While they got much right, I am stunned at what they got wrong. Which is a shame because this could have been an outstanding piece, instead it's just OK. 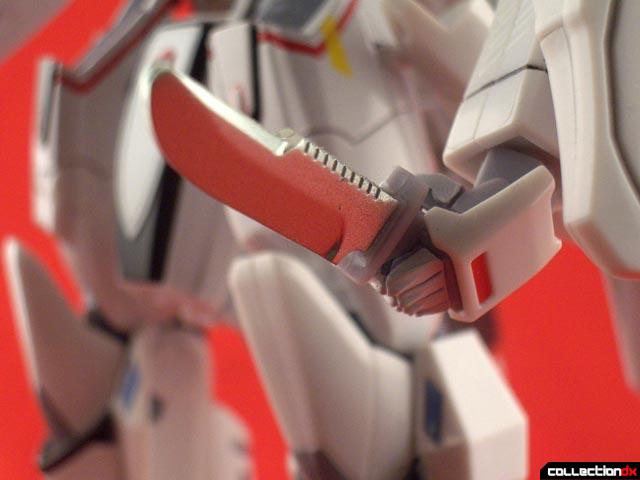 I bought my Alto Custom about 6 weeks after it was released so I've had some time with it and I had hoped that my initial disappointment would wear off but it hasn't. So while others have been more forgiving of this releases flaws I am not. 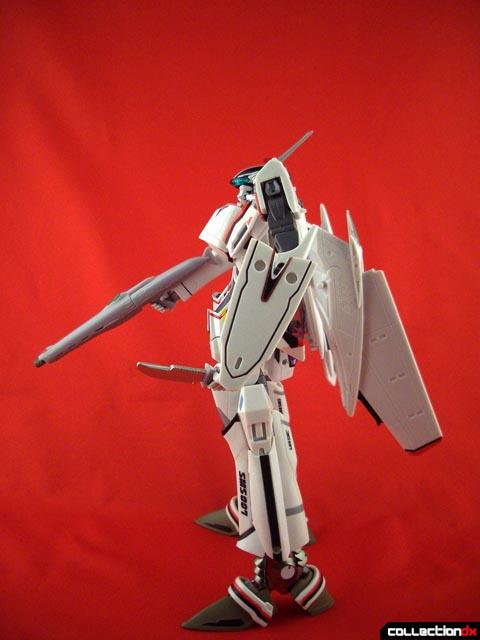 The box is fairly small measuring 8 inches by 14 inches by 3 inches. Images of the actual toy and images from the anime decorate the box. Inside the box is the piece in fighter mode, packed in an old-school Styrofoam tray along with the included accessories. 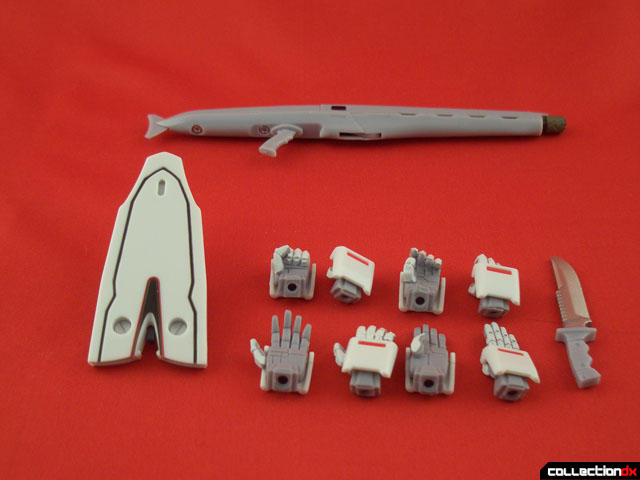 Accessories in the box are... 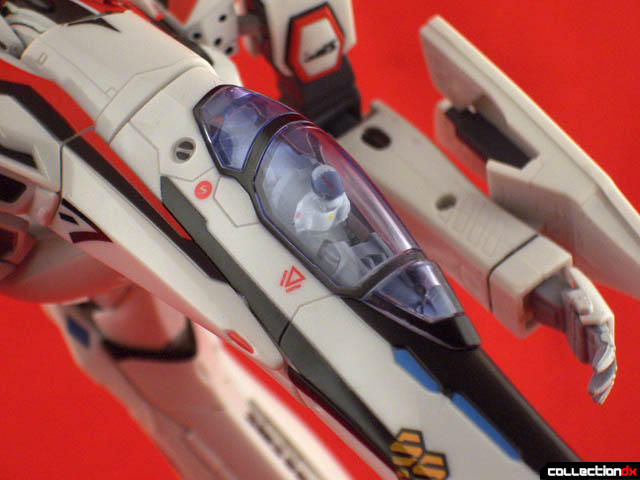 Let's start with the good. 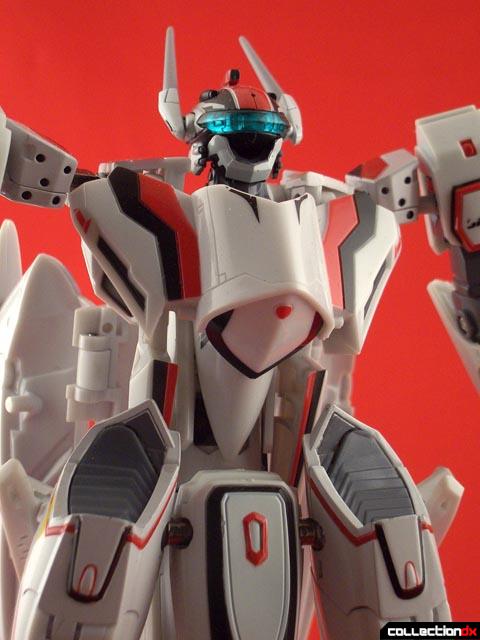 Done in the 1/60 scale these Macross Frontier designs will blend well with classic Macross designs made by other toy makers in the same scale. Overall it's a stable, solid, good looking piece and transformation is fairly straightforward for such a “complex” design. While some have complained the finished piece isn't as slim as the line art I think they did do an overall good job capturing the look and feel of the VF-25 series of variable fighters. 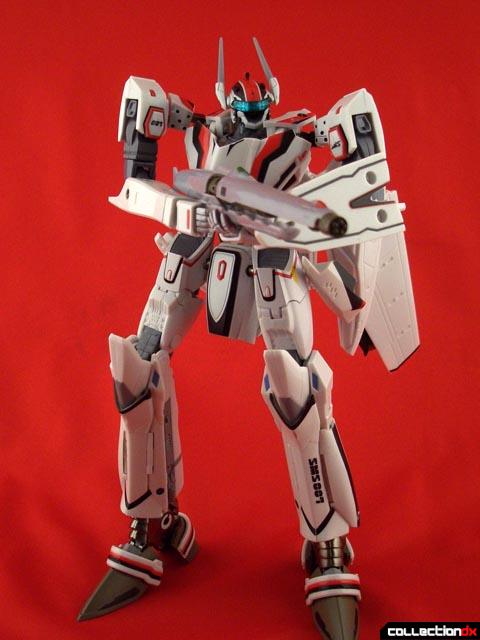 While it doesn't have as much die-cast as the name “Chogokin DX” would imply, the quality of materials used for the main piece are excellent. High-quality plastic, PVC and POM appear to be in use as well as metal in the ankles, thigh/intake, landing gear and shoulder block/joint. The toy feels solid and has a nice heft to it. 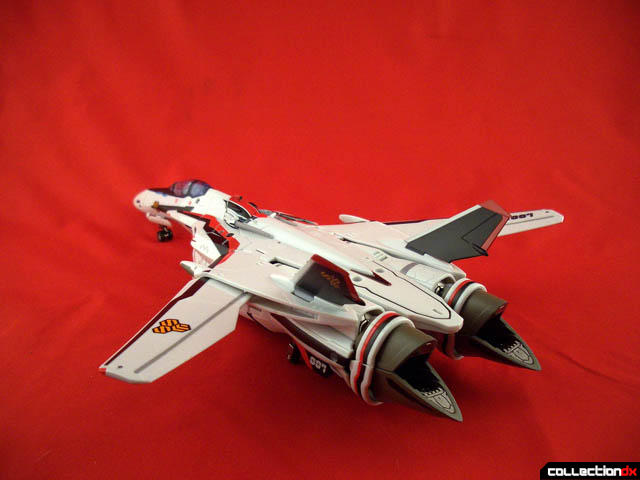 The included instruction book is clearly illustrated and enough to get you through the transformation even if you can not read Japanese. The booklet also features several full-color splash pages with information about Macross Frontier and the latest variable fighter the VF-25 Messiah. 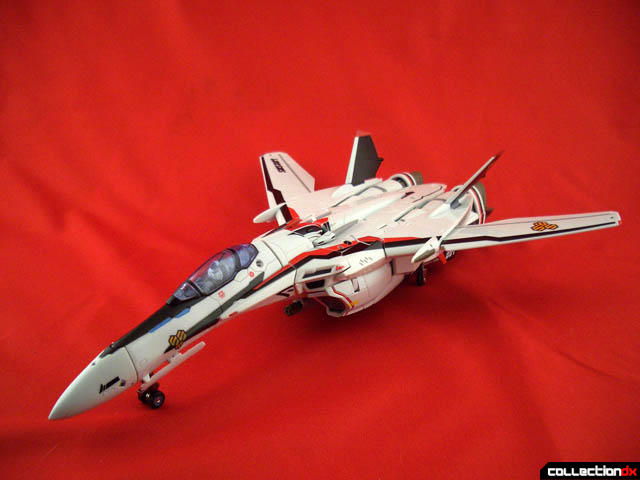 Fighter mode. The proportions are good though some have complained that the side profile is a bit chunky compared to line art. Everything sits and locks without being floppy or falling apart so performing barrel rolls with it is no problem. 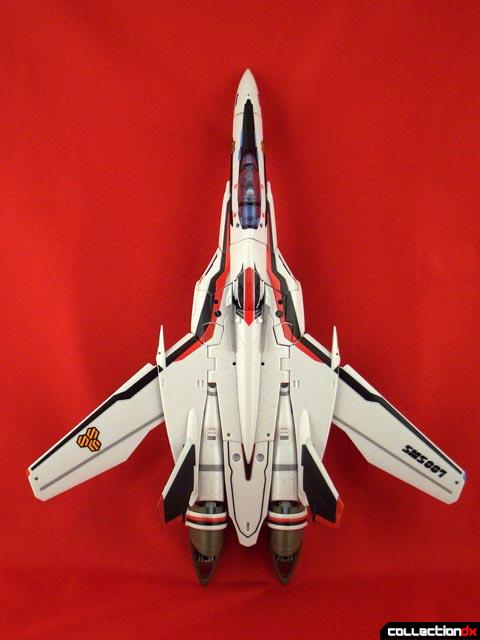 The fighter does have die-cast landing gear with rolling wheels though they are a bit on the short side, barely clearing the ground with the gun pod attached. I suspect this will become a problem with later releases like Michael's VF-25. His Sniper Rifle is so big I doubt the landing gear they've designed here will clear it. Time will tell... 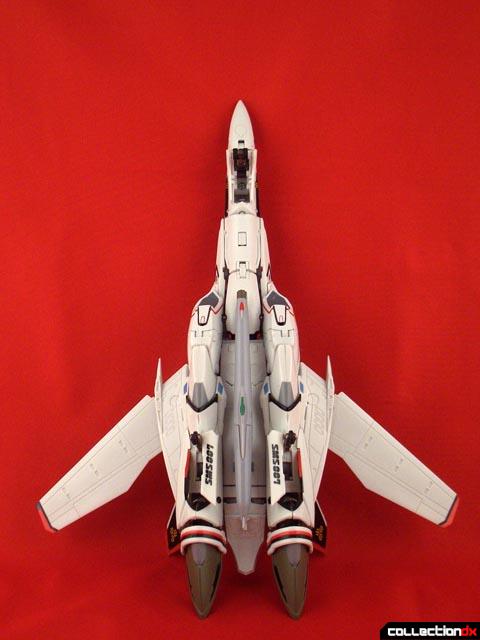 What I did find a strange design decision was the small fins on the lower back legs. In the series they're animated at an angle in fighter mode then fold into the leg during transformation. With the toy, they have the range of motion to angle out properly but Bandai did not cut out the “slot” on the leg enough to allow it that freedom of range. Thus the leg fin must be left pointed straight down. What the...? 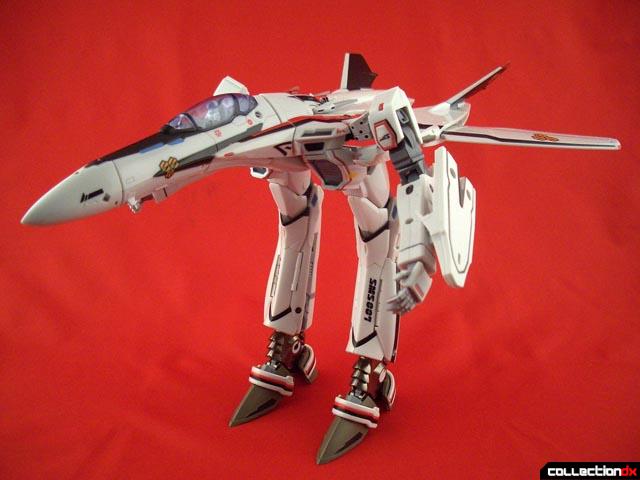 Now Gerwalk mode. Here's where I feel Bandai really dropped the ball. These pictures show the full extension of Gerwalk mode and as you can see it's not very good. The leg has no rotation around the knees, it is just forward and back and that's as far as it goes. Not very dramatic or sexy is it? 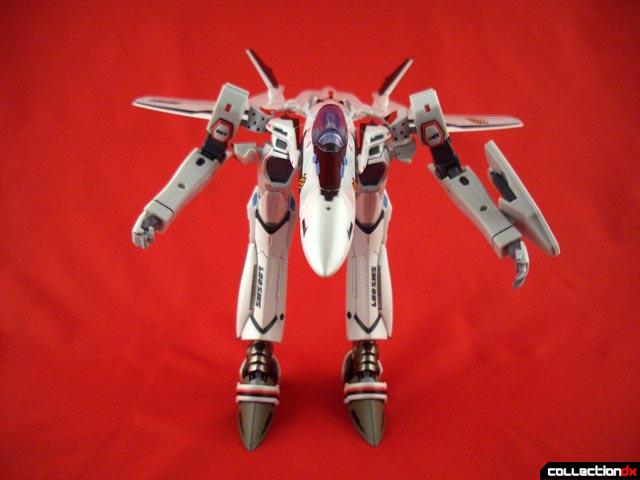 There is however a “trick” to getting a dramatic display. You disconnect the intakes from the main body, pull the “crotch” down a hair and pinch the intakes in towards the body. Spend about a half an hour futsing around with the ankles and feet... then walk away carefully, praying to the toy gods no one stomps through the house shaking it loose. 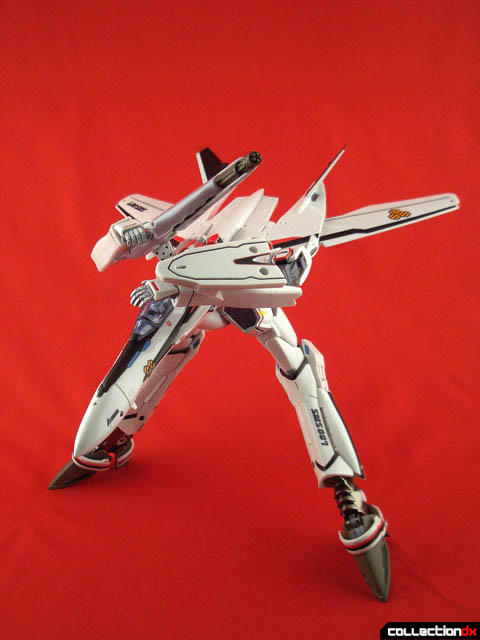 Yeah, it looks good but it's that delicate. I just don't get what Bandai was thinking here. Would it have been that difficult to add just one more “click” to the extension to get upper legs straight? Had they done that and added a rotating joint above the knee they would have had a great overall toy in all 3 modes. Instead you get 2 solid modes and 1 delicate, origami, fragile display mode. Kind of a bummer. 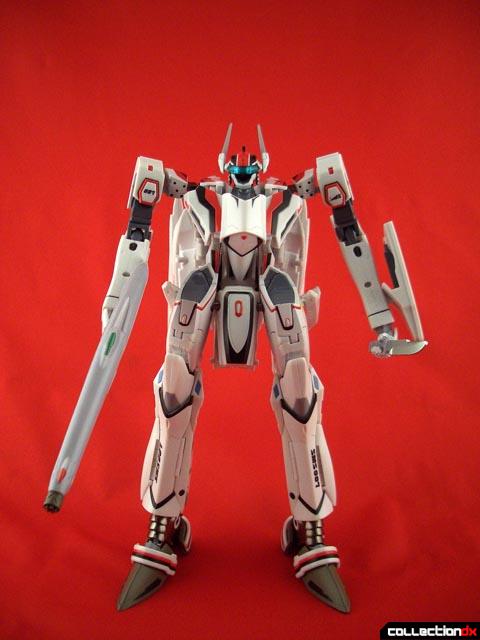 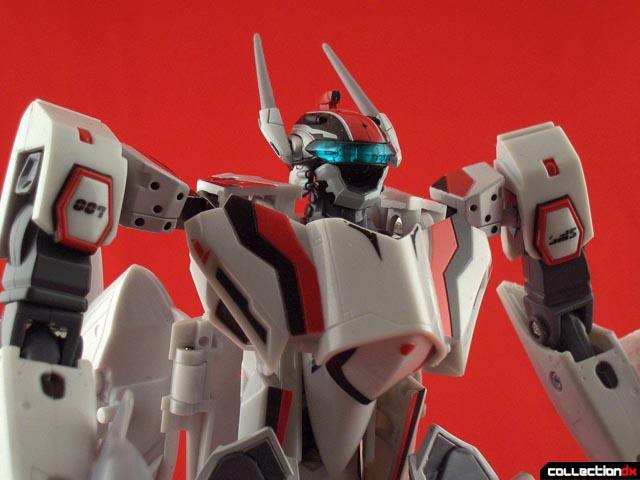 The joints that hold the “shoulder block” are actually fairly good. As a matter of fact these joints do allow you to get the arms in some excellent poses but sadly my right shoulder is very loose so it won't actually hold it's arm up at the shoulder without support. Ironically my left shoulder is super tight. Judging by feedback on the Internet it's a QC issue that plagues many but not all out there. So buying one is a bit of a game of Russian Roulette on whether you get a bum one or not. For the asking price and the QC we know Bandai can achieve; it shouldn't remotely be a question when purchasing one.

I also noticed after just a few days of handling that some of the tampo printing on plastic is prone to rubbing off. My Alto's left shoulder's SMS marking is half rubbed off with nothing more than casual handling and transformation. There are several other spots that have slightly rubbed off but nothing as noticeable or as prominent as the shoulder. 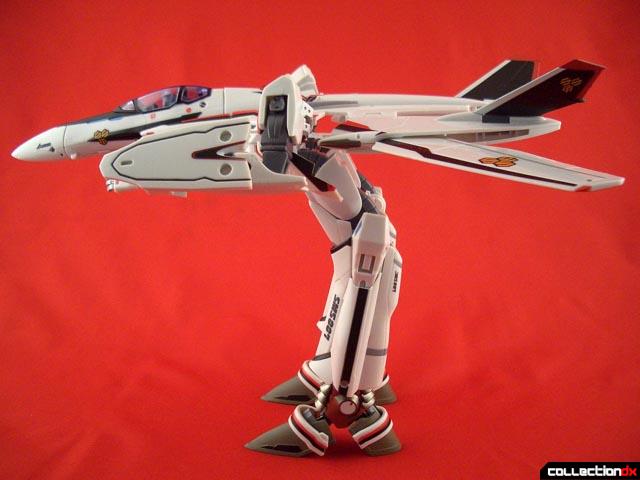 With today's engineering why the compromises in the design to begin with? There is no reason for swapping hands and such a lackluster Gerwalk mode? Was there not enough time to engineer a wider range of joints or rotating knees? Was it really that difficult to design articulated hands? Was it next to impossible to design a slot for the assault knife? Really Bandai? Really? I mean would these things have really added that much to the cost of the finished piece? Was there not enough time to make these things happen? 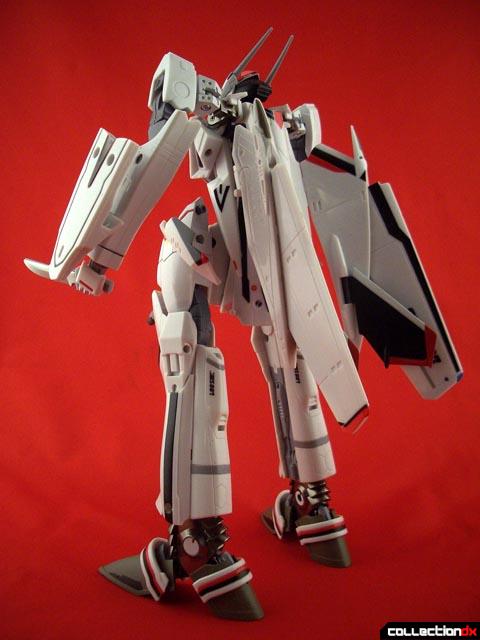 Sigh. I can let the other stuff slide but that Gerwalk mode is unforgivable. Granted you can cheat a good looking display for this mode but it definitely goes against the rest of the “toy-like” feel and charm and is such a let-down when compared to the other modes of the toy. It just leaves me feeling like they rushed to meet a release deadline or skimped to keep costs down. For the record I could have waited a month or two longer and would have easily paid more for these few simple features.

There is a lot to like about this release and only you as a collector can decide whether the cost of entry is worth what you are getting for the price. Personally, I do not, but your mileage may vary. I expect more from Bandai in the 21st century and I just hope their upcoming Macross Quarter fares better.

14 comments posted
I've been praying with all

I've been praying with all my black little heart for Bandai to re-release this toy with the Armored parts (and stop mucking around with obnoxious little web-shop exclusives), and now I have to pray twice as hard for Bandai to fix the QC issues described here, though I somehow doubt they will feel inclined to do so. Maybe I should just start praying for Yamato's people to break into the Bandai offices one night and hijack the Macross Frontier license....

I think the Alto custom VF-25 fared better than the Ozma, which has a terrible neck joint and bendy head lasers. Oh and another point of complaint would have to be the extraneous mounting piece for the gunpod, which could have been a part of the weapon itself. Also it is true that Michel's VF-25 cannot mount the sniper rifle in fighter mode if you want to set it on its landing gear.

When Michael's sniper rifle is mounted in Fighter mode you need to use the display stand included, the landing gear are too short. Even then you kind of just leave the rifle sitting there unattached from the VF-25 on the stand. That said IMO Michael's is the pick of the bunch with the FAST pack attached.

I had gotten this for Christmas and was so disappointed with the described flaws, especially the print rubbing off (I mean, come on Bandai!!) , that I tried to return it where I had purchased it. They wouldn't give me a refund, but gave me a new one. I flipped it on ebay and got the awesome Toynami Cyclone instead. (No complaints on the Cyclone). Wow, I never thought I would pick a Toynami product over Bandai...

Neat.
At least you didn't get the two-tone green luca rvf-25. I'm awiting for the armored ozma custom redesign to be released.

Nice, in depth review. Is someone going to review the RVF-25 one?

It seemed to me that the general consensus both from the review and from the numerous comments was that this toy is fairly subpar.

For that kind of money, I'd expect more.

Understood. Thanks for clearing that up. ...Vince takes enough of an ass-whooping online as it is, so comment withdrawn!

What'll you say is better in your opinion? The Ozma, or the Alto custom?

I like the idea of having different posters review variants of the same toy (I apologize in advance for the ignorance of calling two different Macross models "variants", but you know what I mean). I like getting a different point of view and photography style.