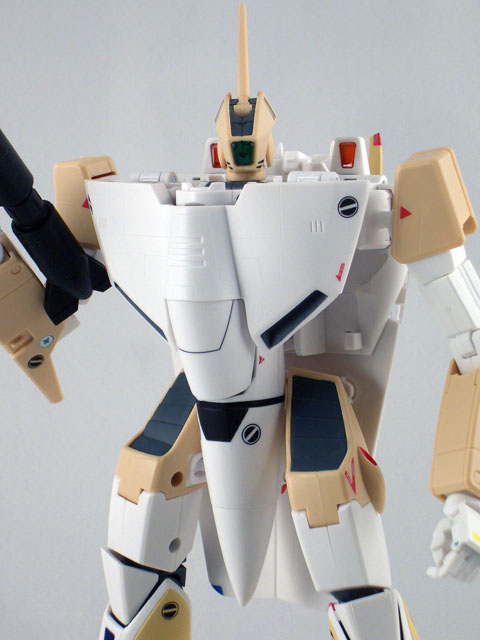 I have wanted a complete Vermillion Squad since I first saw Robotech back in the '80s. Vermillion squad was the main character Rick Hunter’s first fighter squad before taking over Skull Squadron. All I could ever find was the standard cannon fodder brown and not the primarily white with khaki trim machine that the character Ben Dixon flew in the show. For years I dreamed I'd find a Max and Ben to go with my Rick VF-1J. 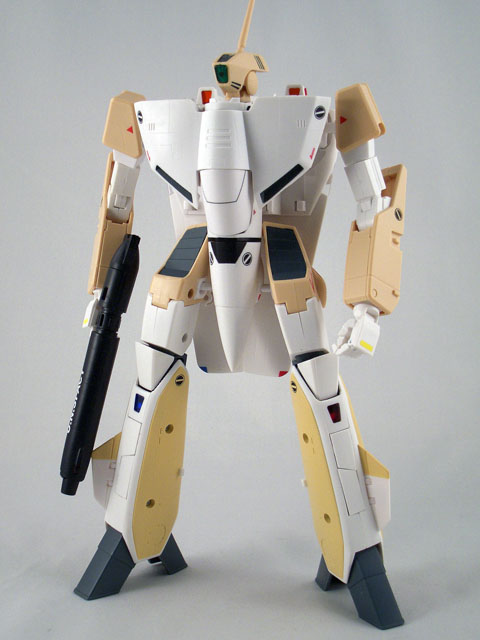 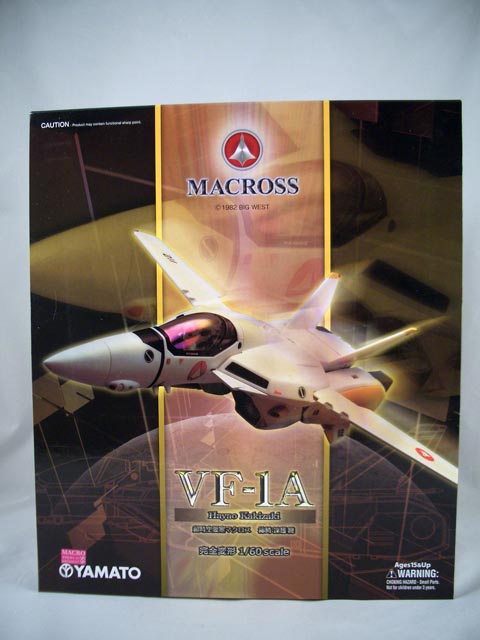 The VF-1A is packed in fighter mode in the usual Yamato window box. One vacuum-formed tray holds the fighter and all of its bits and bobs snugly in place. Included in the box is the standard and plentiful assortment of accessories we have come to expect from Yamato and their 1/60 scale Macross Valkyrie: 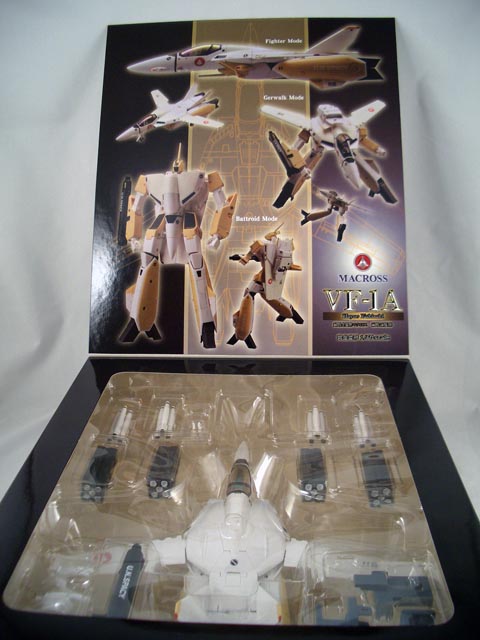 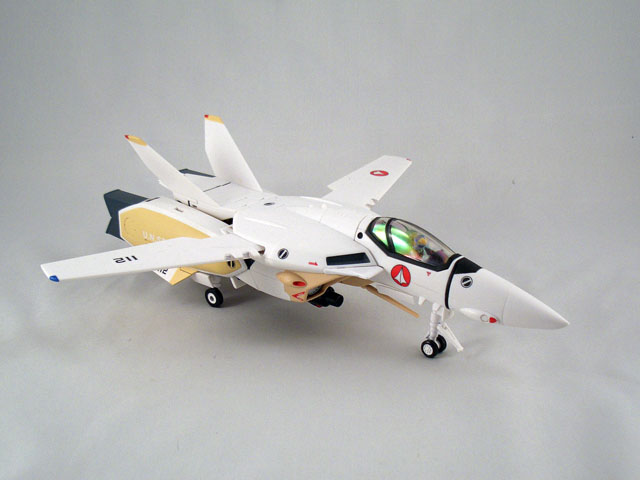 At this point, you have heard all about Yamato's 1/60 scale Macross Valkyries; fantastic sculpt detail, flawless paint applications, precision engineering and fantastic play value. Honestly, it’s just more of the same, but this time in Ben Dixon colors! 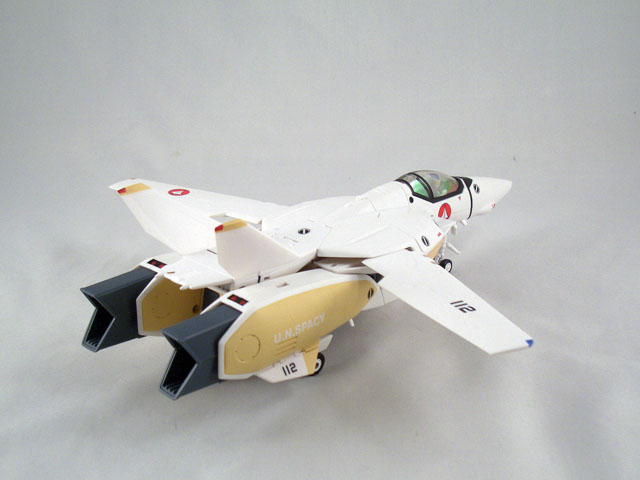 In fighter mode the Valkyrie is sleek and sexy, perfectly capturing the original line art of the design. Everything sits nice and tight, allowing you to barrel roll the fighter without fear of floppy tail fin syndrome or a gun pod falling off. 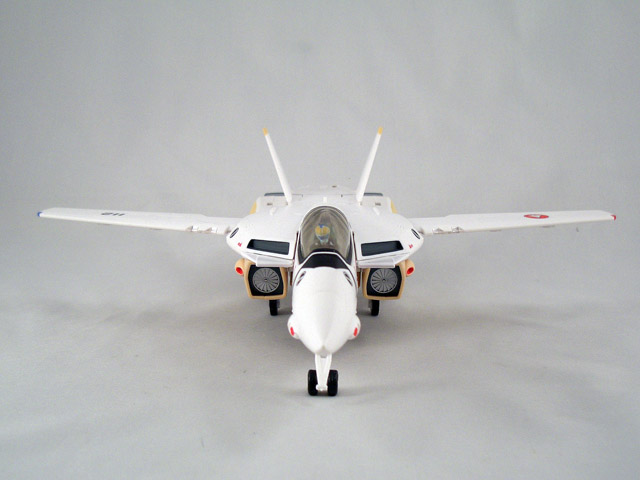 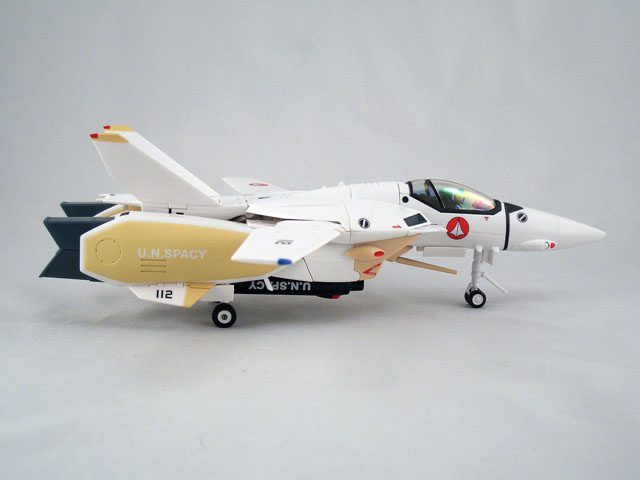 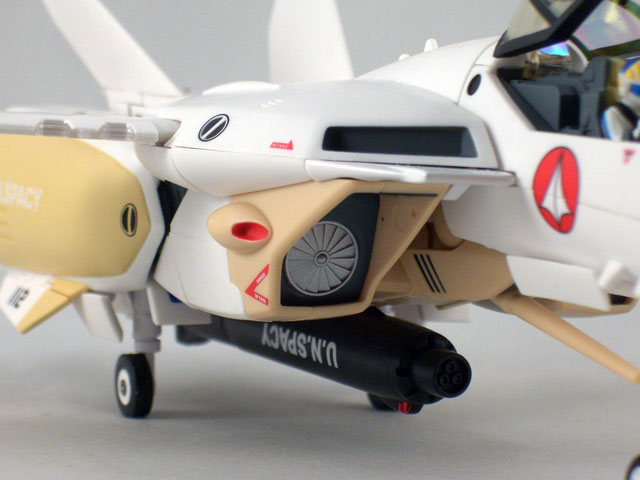 The included Hayao Kakizaki figure is very well detailed, and the paint application is very good. Many times when you get accessories this small, it seems manufacturers cheap out a bit and you usually end up with a pretty sloppy paint job upon close inspection; not so with these newer 2.0 releases. 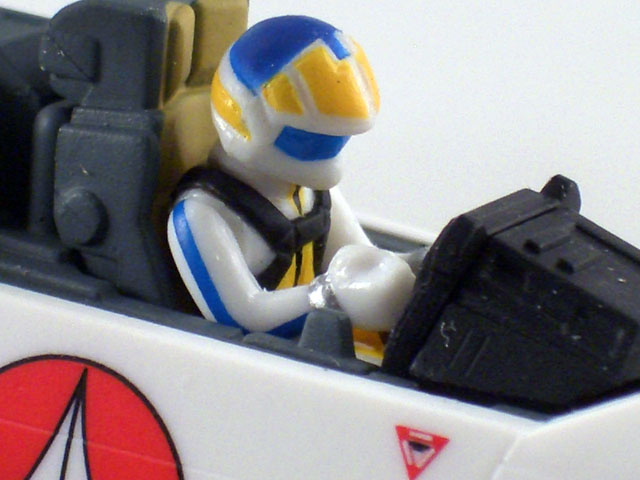 Gerwalk mode is also impressive. With the aid of one of Yamato's aftermarket stands, you can really get some iconic and dramatic poses with these guys. 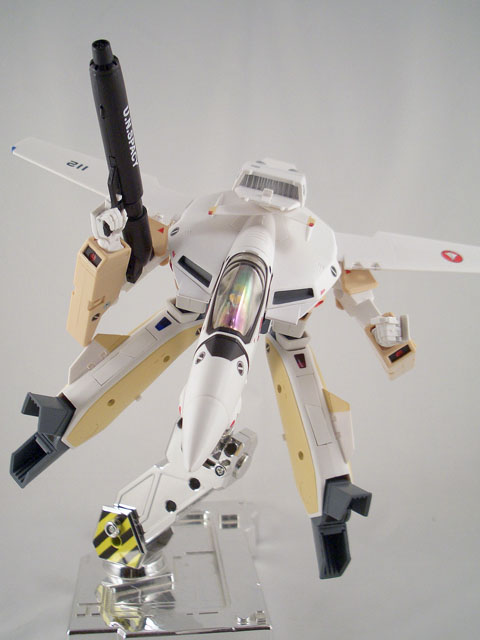 Don't have a stand? That's ok. Tight, clicky joints will hold it up just fine. 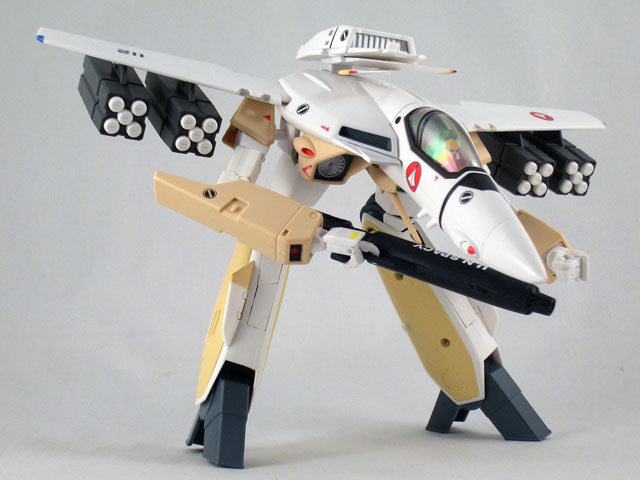 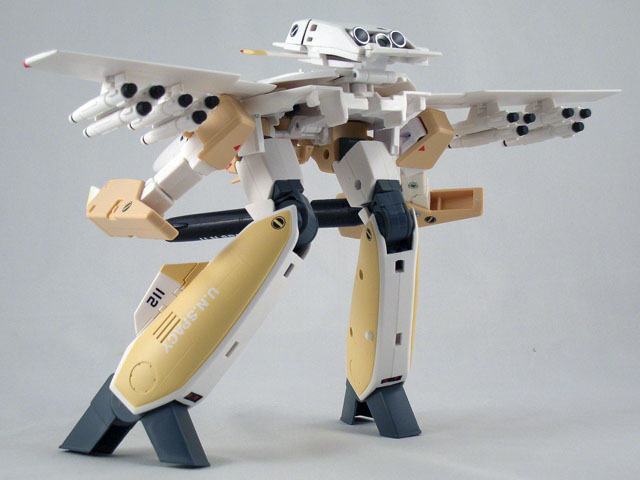 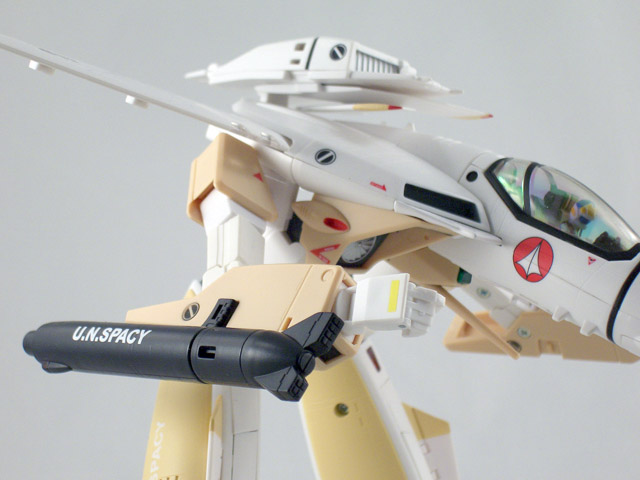 Battroid mode is fantastic as well. In robot mode, the toy shines. The figure is highly posable and the contrasting snow-white against the tan looks very good. 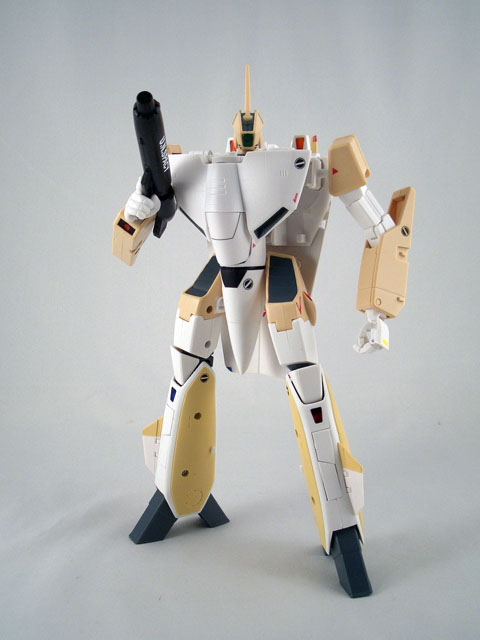 You may notice in the photos that the tan on the legs seems to be a bit off-color from the other tan parts. In-person, the painted legs look the same as the molded tan color, but in photos seem a bit off. 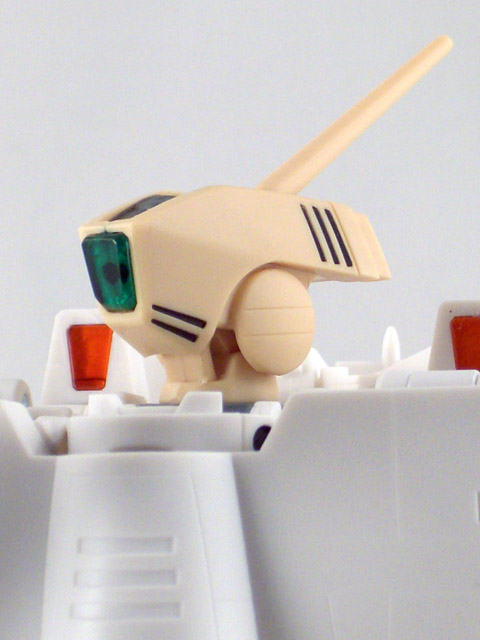 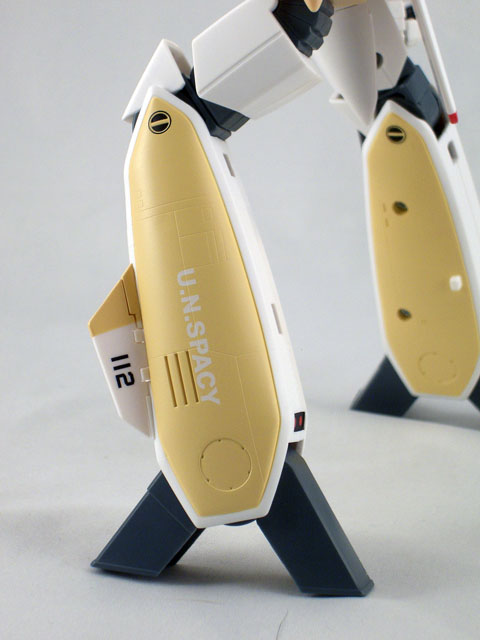 Honestly, I'm out of clever things to say about this fantastic toy. If you haven't bought a 1/60 2.0 Valkyrie, you should. They are well-made toys, and any Macross fan will love them. Just pick some color schemes you like, and go for it. 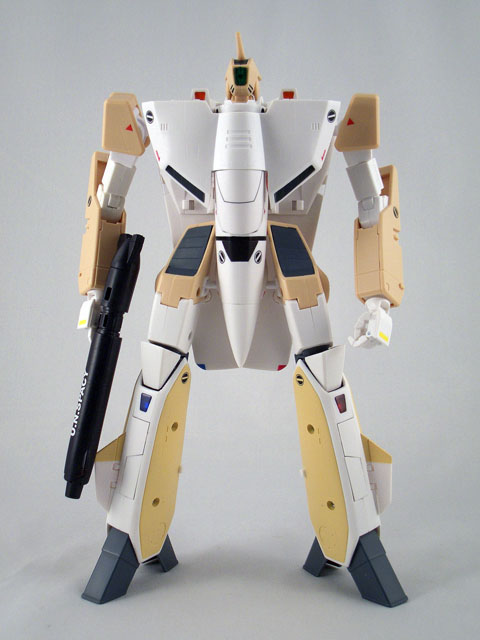 7 comments posted
So the shoulders are safe on

So the shoulders are safe on this one? Honestly that's been the main thing holding me back on picking one of these up..

I just bought this one. I was super excited to get it out of the box and on the first transformation into battroid mode the right shoulder snapped right off....

I notice the shoulder pin feels 'tighter' than my VF-1S Max so I think it has that bad shoulder/pin problem. =(

ive always liked the look of the VF-1A head, but this new sculp makes it look even more nimble (can a head look nimble? hmm...) and kind of menacing in that blank stare kind of way. im rambling. anyway, it looks real sharp, and im tempted more than ever to get into yamatos latest line of valks, too bad my wallet cant weather another toy purchase...

question: does the VF1-J suffer from the aforementioned shoulder issues?

I like the design of the VF1A headsculpt as well, but I remember it as the one which got crushed most often by Zentraedi bare hands. Gee, the Valks looked so vulnerable.

"At this point, you have heard all about Yamato's 1/60 scale Macross Valkyries. It's just more of the same with this release but this time in Ben Dixon colors!"

We've heard it already it's true, but we want more information on them to see if it's still worth getting based on personal experience & you're the answer.

I'm convinced with this review. I'll consider getting this baby on my want list, but I'll pass on the Toynami Robotech Masterpiece version. The thing looked like a bad Bandai model kit pretending to be a high end toy, & thankfully this one's the real thing.

Only reason I like Max's -1A over Kakizaki's is the latter's color scheme is still too similar to the standard -1A soldier we see all the time. Max's stands out a little more with the blue.

That's well and good of course, but personally I like all 3 VF-1As except for Hayao's DYRL VF-1A. The color scheme reminds me of chocolate mints & I got a habit for scarfing chocolate mints.