This figure was provided by the fine folks at HobbyLink Japan

The packaging used for the Unicorn Gundam is the usual Robot Spirits window box with a sash across the bottom that I believe is advertising the Gundam Unicorn OVA series. 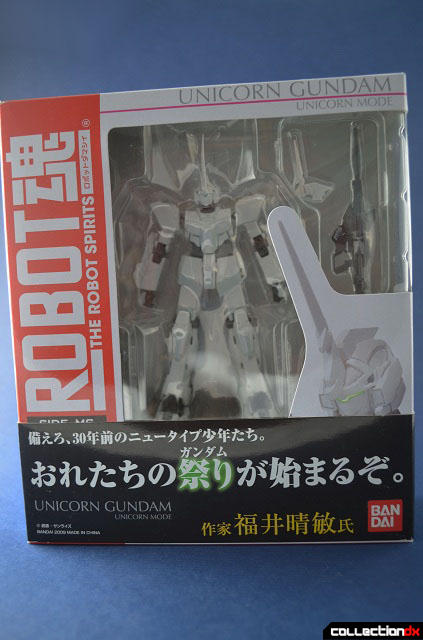 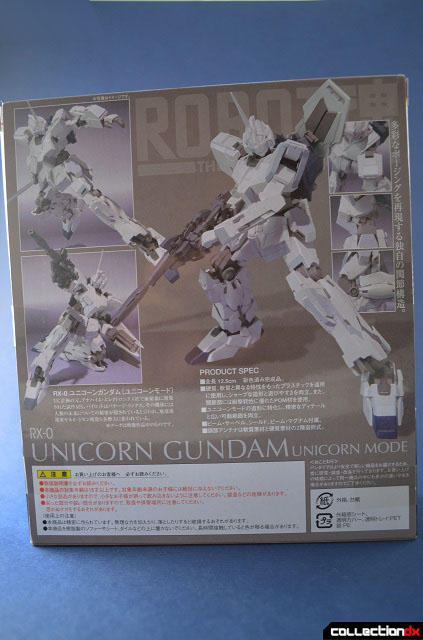 The Unicorn Gundam has two modes of operation: Unicorn and Destroy mode. Unicorn mode serves as the base form, with some of the Gundam’s capabilities sealed off from the pilot. It is called Unicorn mode because of the large horn that sticks out of the Gundam’s head.  Besides the signature horn, the Mobile Suit looks like a pretty standard Gundam-type looking Mobile Suit.

Most of the Unicorn Gundam is white, but several parts of the figure are actually a light blue-ish white to give the figure the appearance of shading. 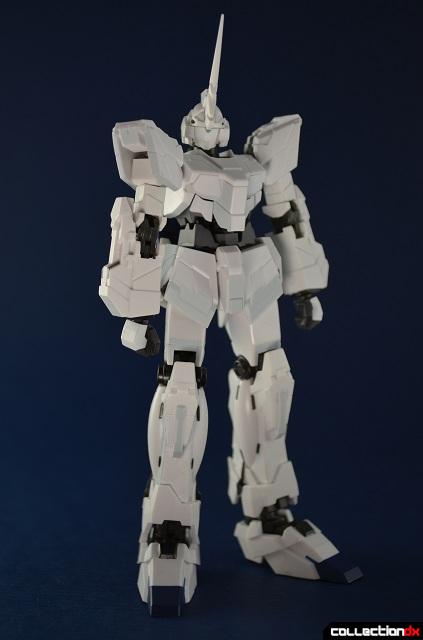 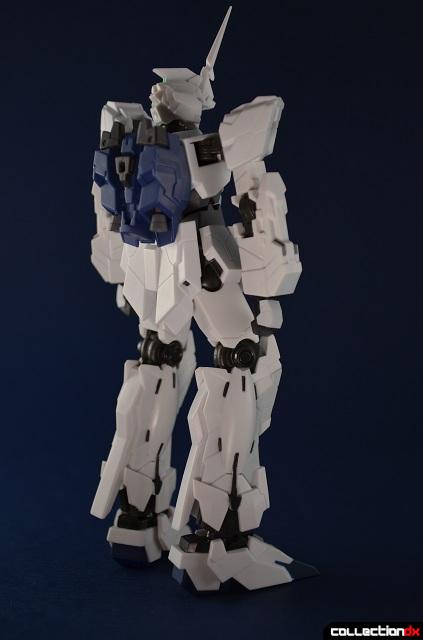 The Robot Spirits Unicorn Gundam comes with two crests for the top of the head. 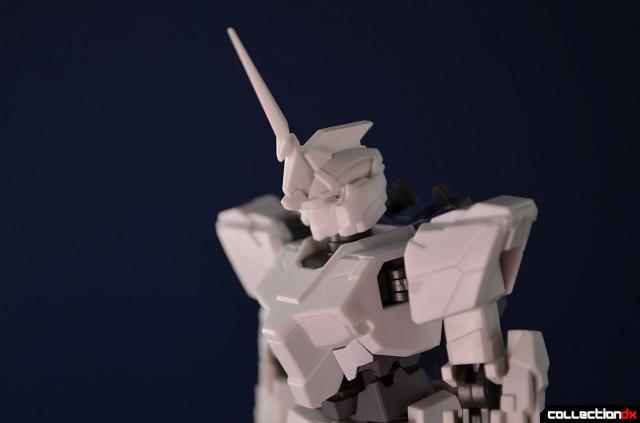 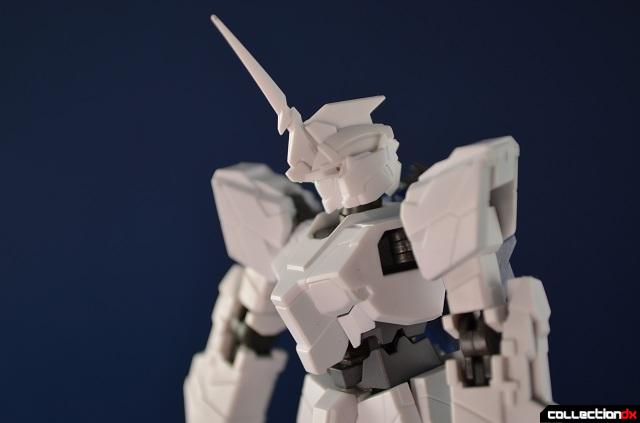 There really is not much of a difference between these two, save for the fact that one has a horn made of soft plastic. 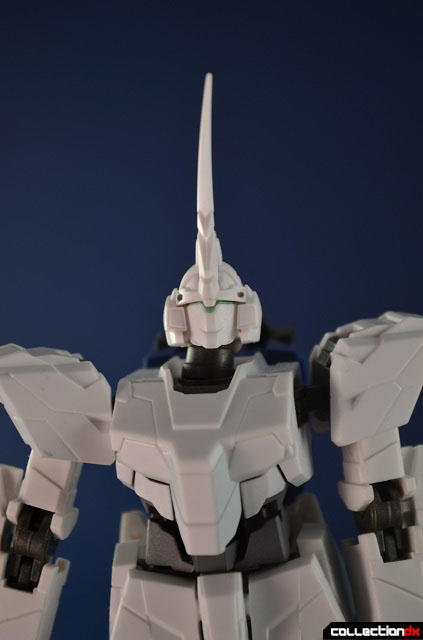 I knew that getting this horn to stay straight would prove to be a nuisance, so I immediately swapped in the crest with the horn made of hard plastic.

The Robot Damashii Unicorn Gundam does a good job at providing the kind of movement you would expent from a Mobile Suit and then some.The legs of the Unicorn Gundam have a great range of  lateral motion that are a compliment to the well-balanced figure. The front and rear skirts can move outward a bit to facilitate the movement of the legs. 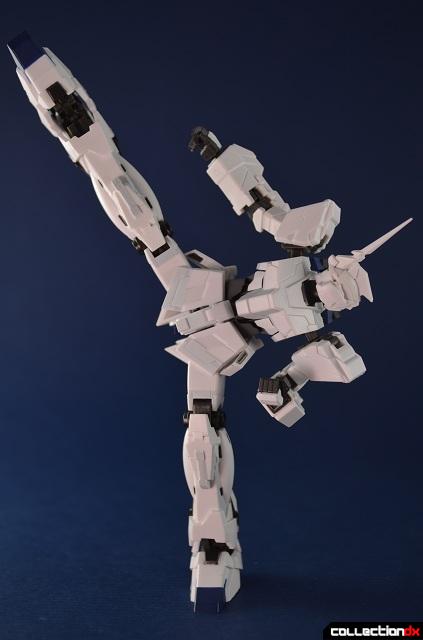 The core of the Unicorn Gundam is composed of two segments to allow the top and bottom halves of the midsection to move independently. As a result the midesction can be toggled forward and back and side to side a bit. 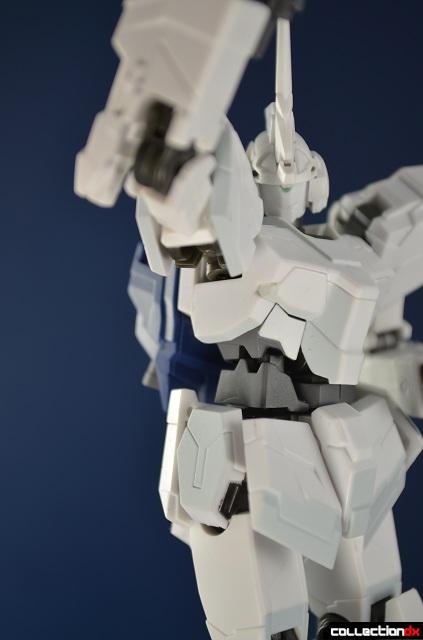 The Unicorn Gundam is equipped with a beam magnum. 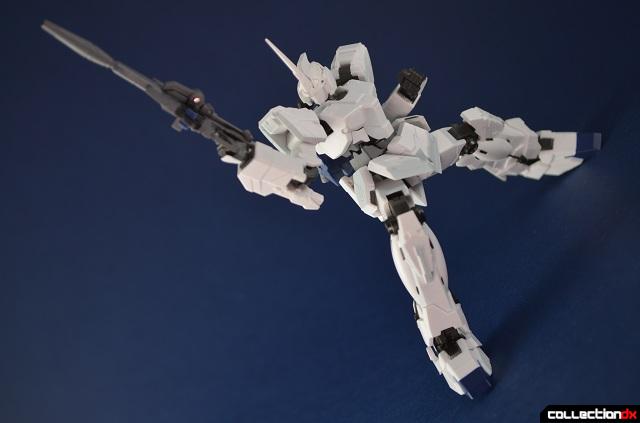 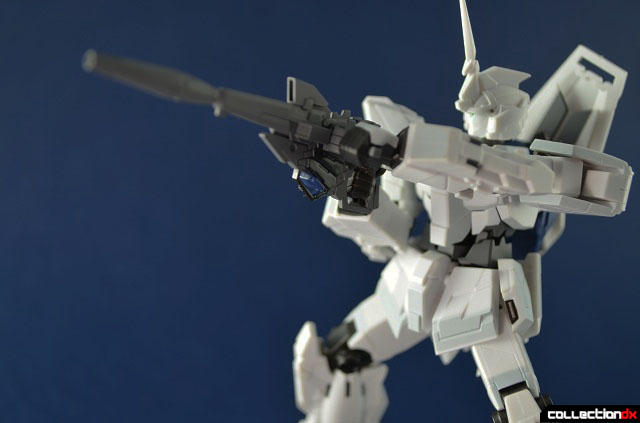 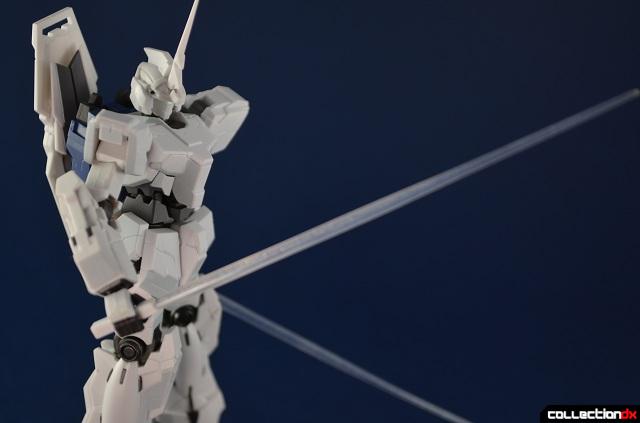 At first glance these beam sabers appear to be just clear plastic, but there is actually some glitter inside of the plastic to make it look like they are flowing with energy. 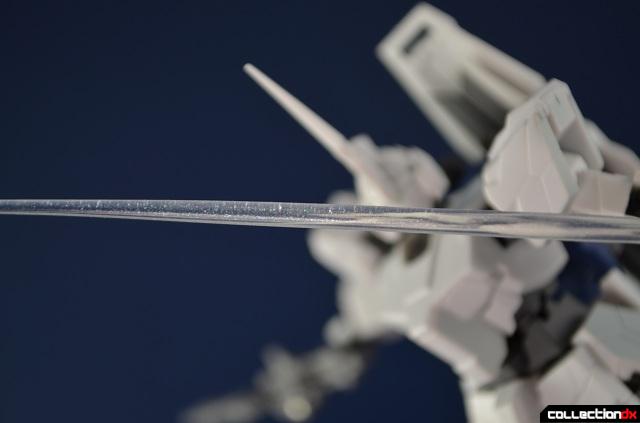 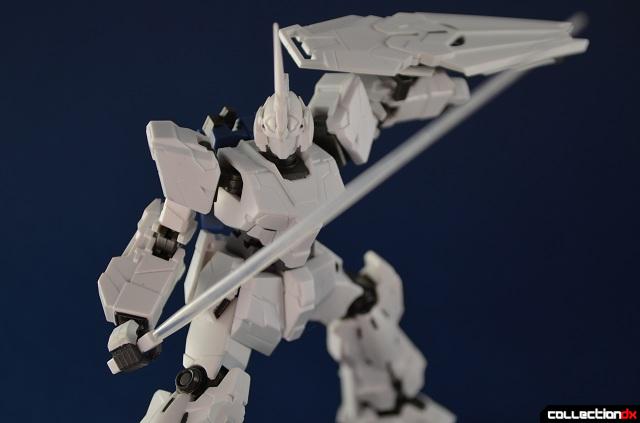 The shield for the Unicorn Gundam is unique in that it has four petals that extend out from the shield. 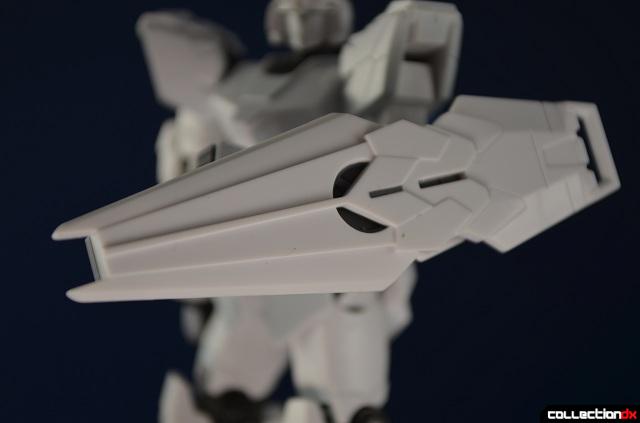 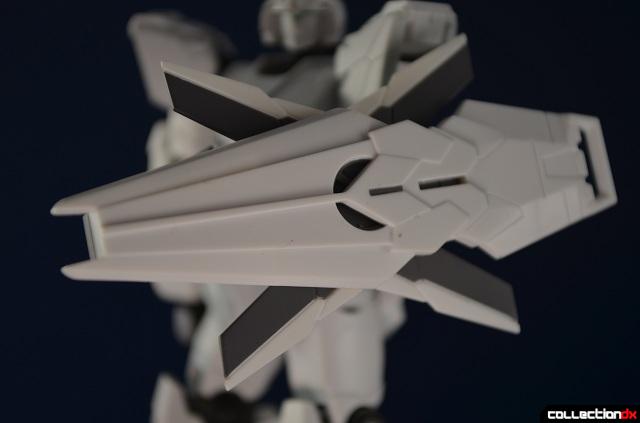 As for weapon storage, the beam sabers fit neatly and snugly into two slots in the backpack. 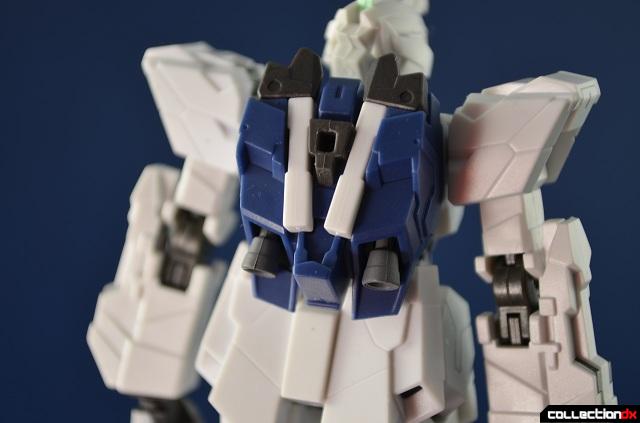 The shield can also be attached  to the backpack using a small adapter piece. 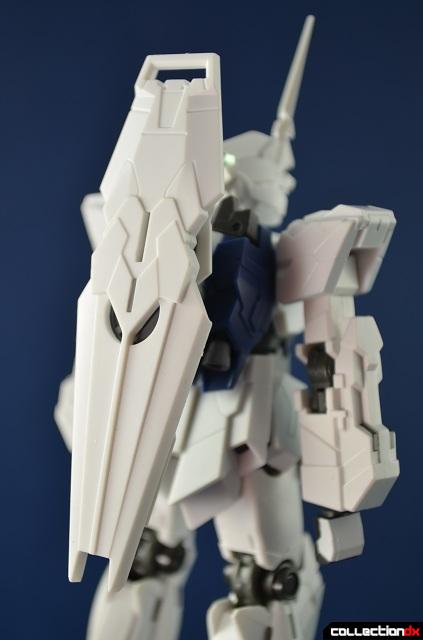 The awesome design of the Unicorn Gundam suffers from the fact that Bandai did not color in the panel lines.The end result is that the Robot Spirits Unicorn Gundam ends up looking like a pretty generic white Mobile Suit. That bothered me because I really like the design for Unicorn Gundam. 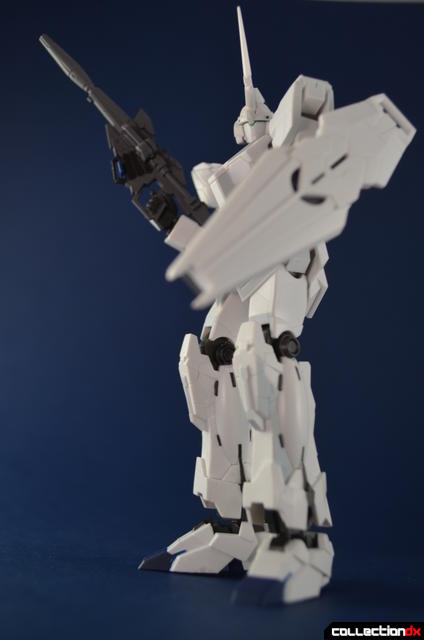 So, I dug up my old Gunpla gear and finished the job that Bandai started. 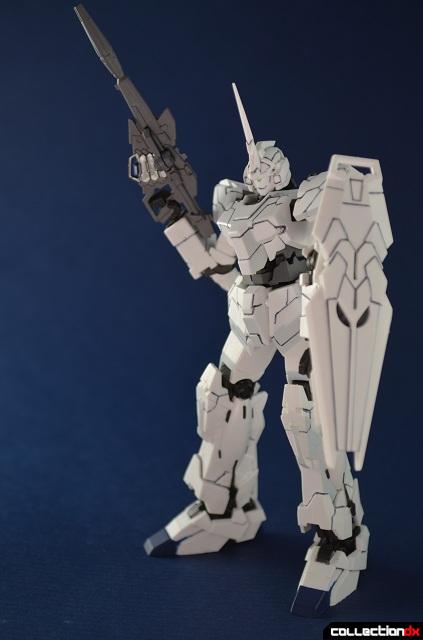 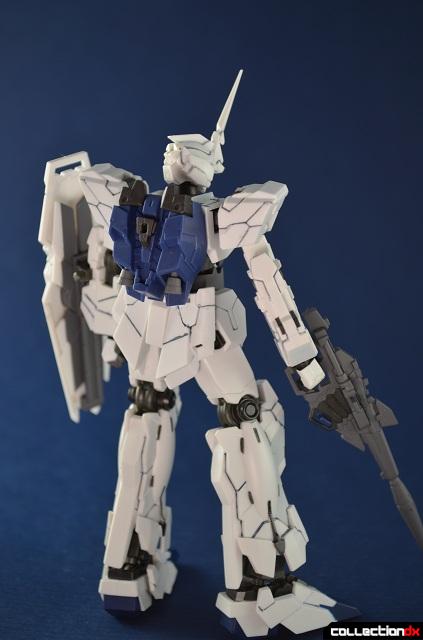 Adding the panel lines to the Unicorn Gundam really helps make the figure look more mechanical and accents the jagged design aesthetics of the Mobile Suit.

Overall, the  Robot Damashii Unicorn Gundam- Unicorn Mode is a pretty decent figure, with great articulation and some fairly standard Gundam weaponry. It also proved to be a good piece for me to practice filling in panel lines on, and reminded me of a time long ago when I used to build Gundam models. 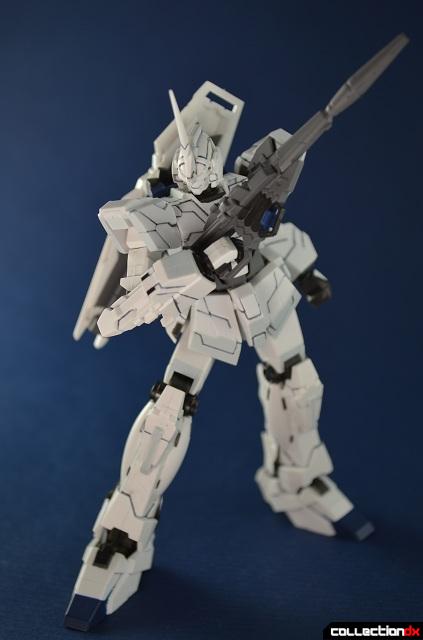 9 comments posted
What a difference!

Those panel lines make the difference between an unfinished-looking Gundam model, and an amazing, dynamic figure. You did a great job adding them, and they turned my feelings about the design and the toy around 180 degrees.

no kidding. most of all the mobile suits coming out look so plain without panel lining. i wanted to buy some of the exclusives like he guncannon, but looking at it without panel lines, i decied to pass. i love this design, but the lack of finish makes me frown. come on, bandai!

i love the design of unicorn gundam :) I'm pretty ok without the panel line. But I wish bandai will give some marking in this toy. Otherwise it does looks bland.

Thanks everyone.I usually don't like to mod my toys in any way, because it does decrease the value of the toy. But with the Unicorn Gundam, the need to add a little extra something to the figure overcame my need to keep the figure in mint condition.

Rupertvalero- I know what you mean about these figures needing to be complete, paint and all; especially if you are shelling out some mad cash for the Tamashii web exclusives. I would not dare put a marker to those. I wonder what Bandai's reasoning is for not doing the panel lines on Robot Spirits line.

no kidding. im a decent customizer, but i don't want to mess up the great detail like on nozzles and thrusters on my Nu gundam and unicorn. you are right, for the top dollar, we should get more out of it like the great attention to detail and finish we get from Robot Damashii evangelions.

This Gundam is the reason that I started to order stuff from Japan. The design is striking and unique, I really like the white color for this mobile suit, and that it doesn't make use of the more common Gundam colors (blue, yellow and red).

I like this thing so much that I bought two MG model kits, the titanium version and the new (not Katoki) master grade.

Sadly I wasn't able to get the GFF Unicorn Gundam, because of it's price.

This looks like a good figure, but suffers a bit for not having more painted detail. You did a great job with the panel lining, it really brings out the details of the figure.

RupertValero- I have not handled a Robot Damashii Eva, but they do look pretty good. I might just have to look into getting one , as I don't have an Eva units in my collection anymore. I have also wanted to check out the Soul of Chogokin Spec Eva units (What can I say, I am a sucker for toys with removeable armor).

mikespiegel- Thanks. I am a bit jealous of your Unicorn Gundam collection. The Unicorn Gundam is a great design. It brings a fresh perspective to the Gudnam look, while still keeping it's bonds to the source material. I am with you on the GFF Unicorn Gundam. While I would llove to get one, it is a little past the price point that I am comfortable spending on a toy.

Thank you, I felt quite proud when I was able to get the titanium Unicorn Gundam, If only I could spare some time to finish building it (the mobile suit it's completely finished, just the rest of the accesories to go).

There was also the GFF Next Generation Unicorn Gundam, which I was about to buy until I found out that it couldn't switch to it's Unicorn mode.