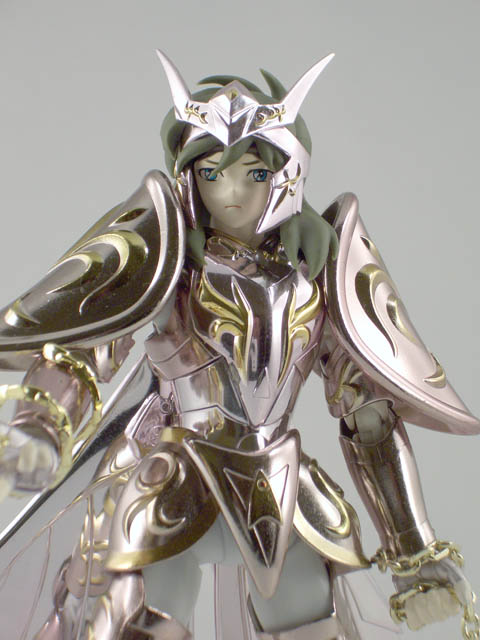 Andromeda Shun is one my least favorite of Athena's Saints (beat out only by Cygnus Hyoga) but I do love the “God Cloths” from the series so I considered this a must-have release. 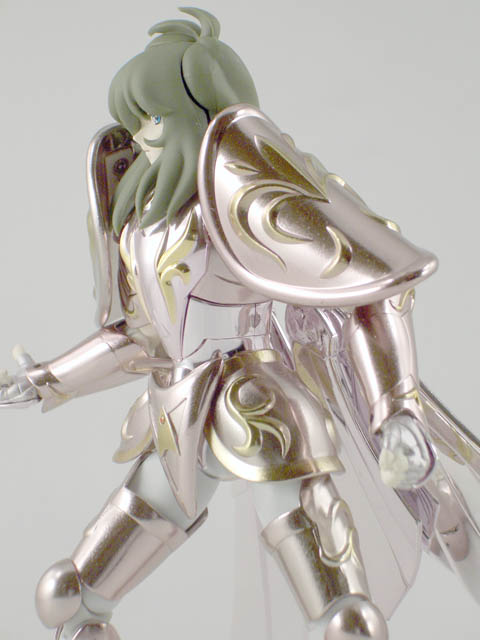 Shun is the pacifist in our group of main heroes in Saint Seiya and a gentle soul. During the final act of the Hades: Chapter Elysion, Athena's blood is used to resurrect the bronze saints cloths and they evolve into “divine” or “God” Clothes giving them the ability to stand up to Hades in this final conflict.

[Note - I speculate that the God clothes are also a combination of the several of the Gold Clothes sent to them to aid them after their original bronze clothes are destroyed. The gold clothes get decimated as easily as the bronze clothes and at that point, Athena's blood is used to resurrect the fragments left over from the conflict. 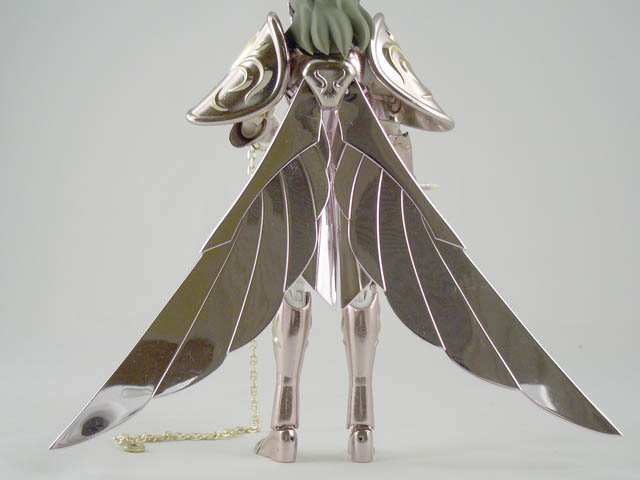 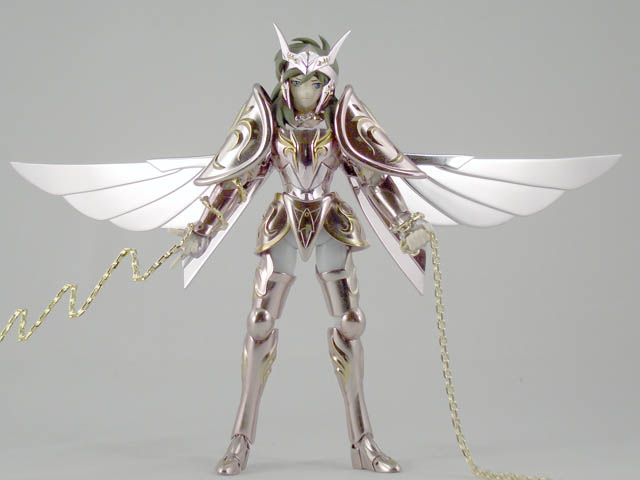 The design of the God clothes very much look like a cross between the bronze and gold clothes used in this final battle. There is no evidence or reference to this in the series in anime or manga and with the story incomplete at this time there is no definitive explanation at the time of this article.] 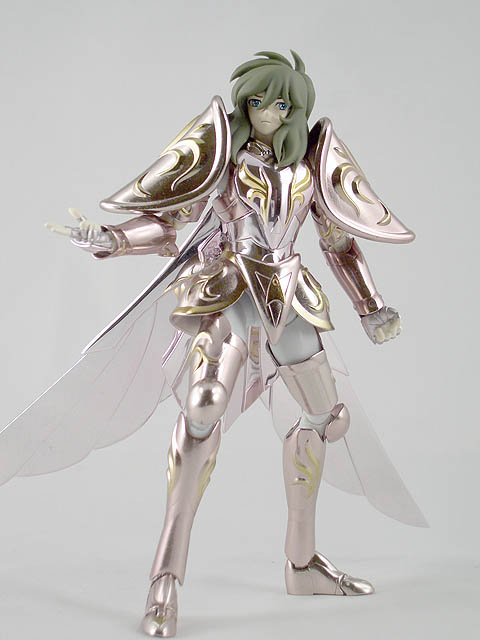 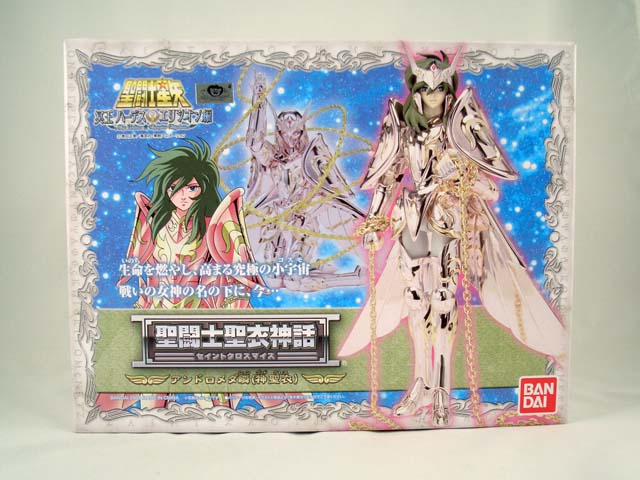 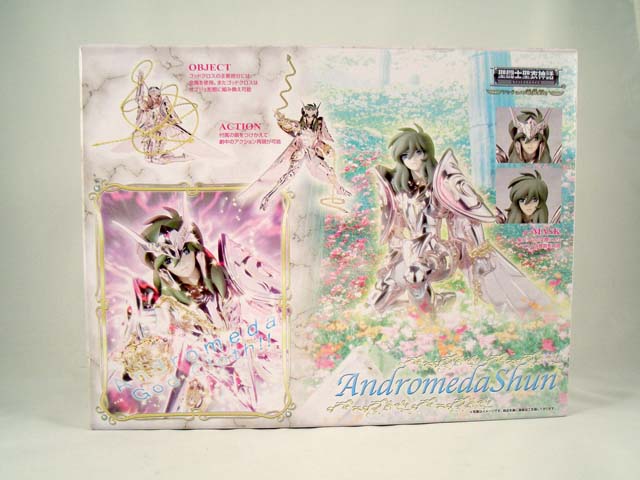 The package is the usual Antique book-style package that opens to reveal all the parts and pieces neatly arranged in vacu-form plastic trays. 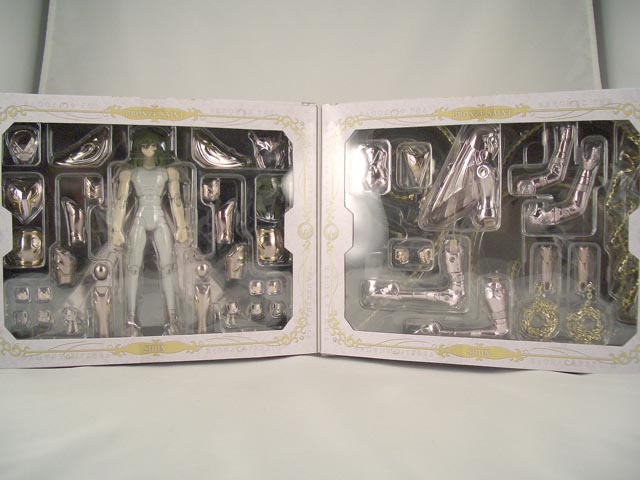 Shun's Cloth is represented by the Andromeda constellation. Andromeda in Greek/Roman mythology was chained to a rock as a sacrifice to a sea monster as divine punishment for her mothers transgression again the gods. Being the Andromeda Cloth, Andromeda's chains are a major part of this cloth's design. 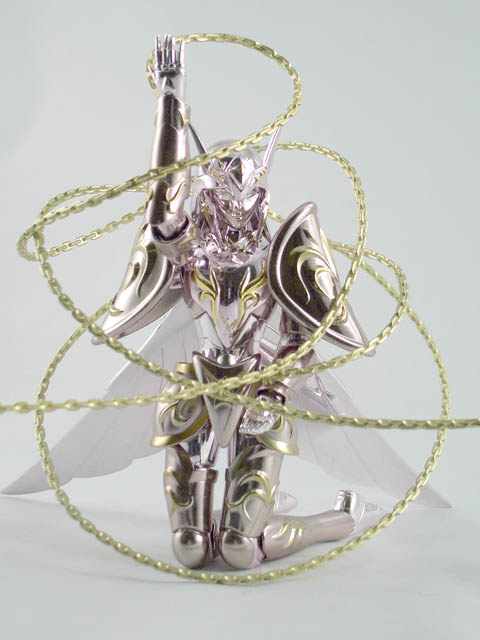 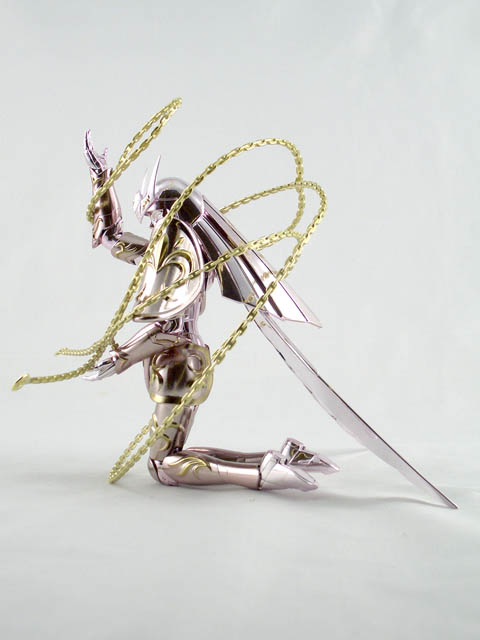 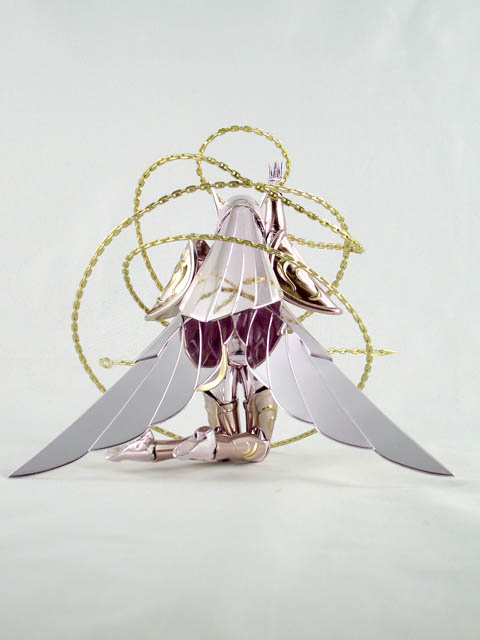 I was really intimidated when I saw all the chain parts but Bandai was very clever with the way these attach and the end result is very cool looking.

The Shun figure is the same as other SCM releases. Primarily plastic with die-cast metal feet. The figures are thin and spindly without armor but that's ok because it's about how they look with the shiny. 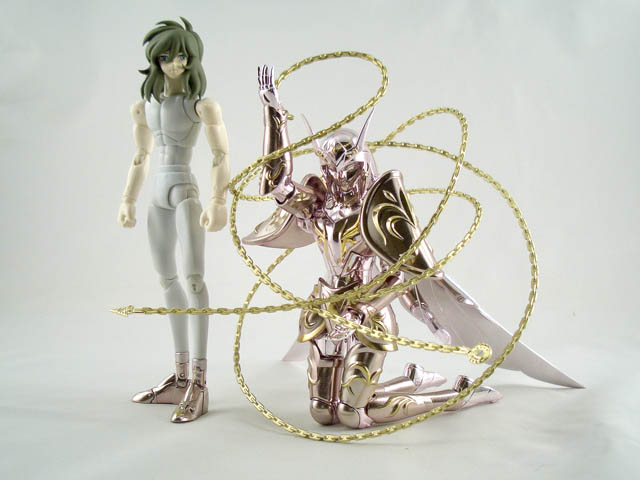 The figure is very pose-able with over 40 points of articulation. 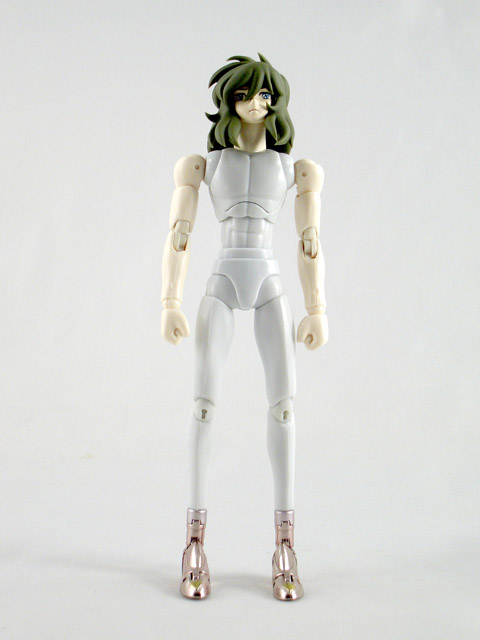 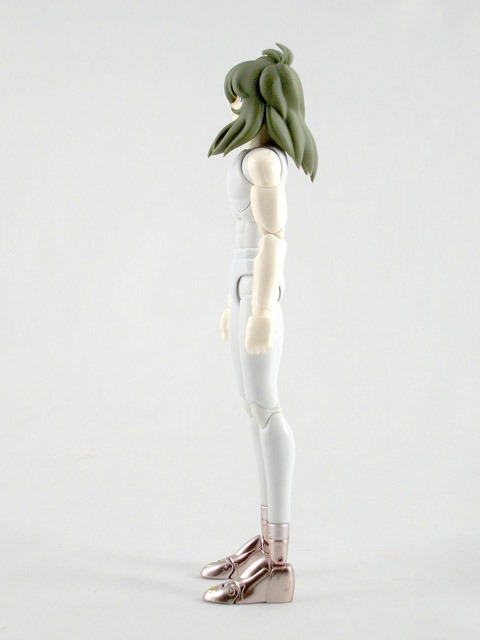 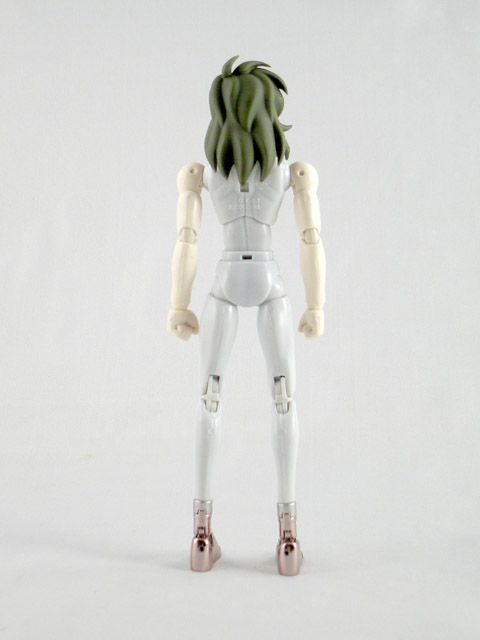 Putting the armor on the figure is pretty straight forward. With parts locking into place or being held on by friction. 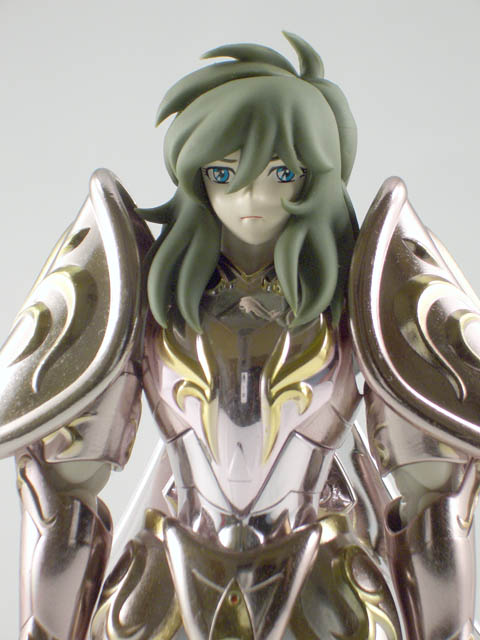 With the ornate design of the God Cloth pose-ability is a bit more limited. 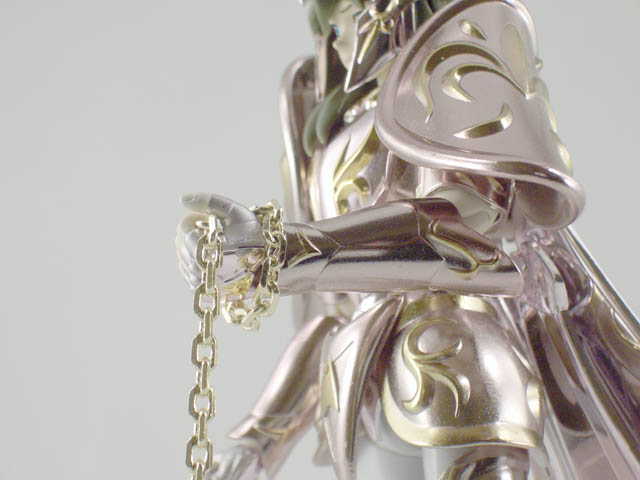 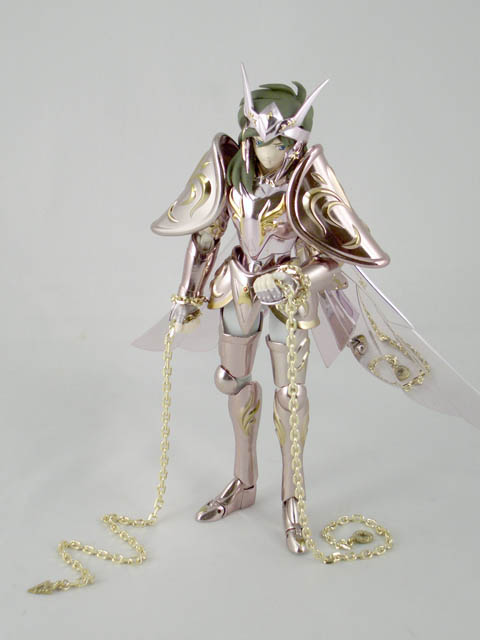 So included is a set of arm gauntlets with real metal chains with enough length to display them in whatever fashion you want to on the ground. 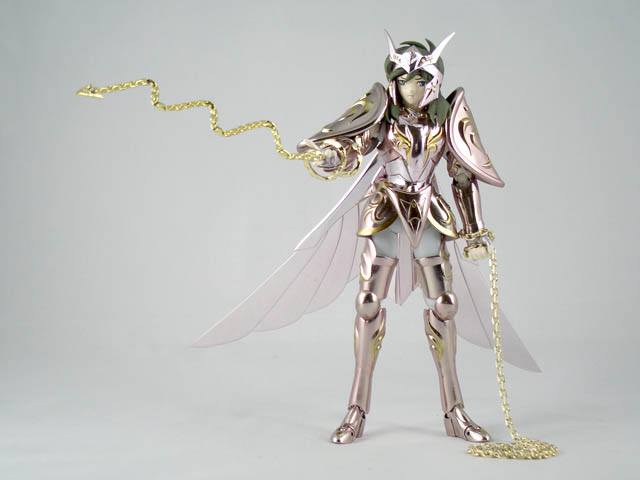 Also included is a pre-shaped plastic chain to show it flying out and attacking. 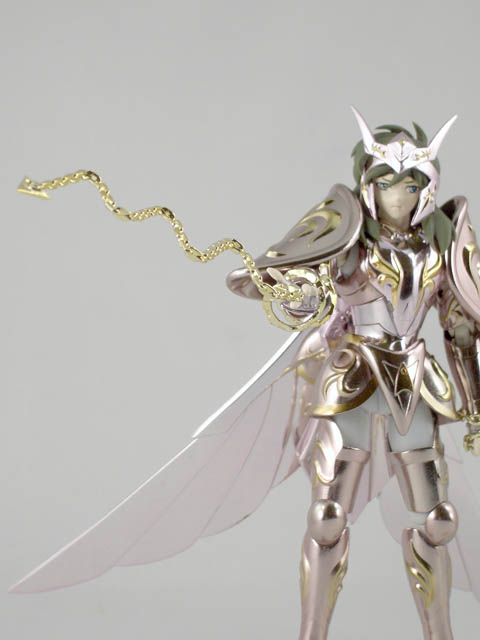 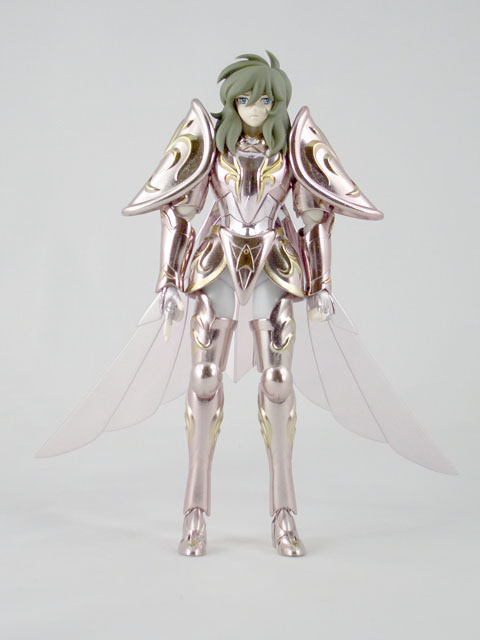 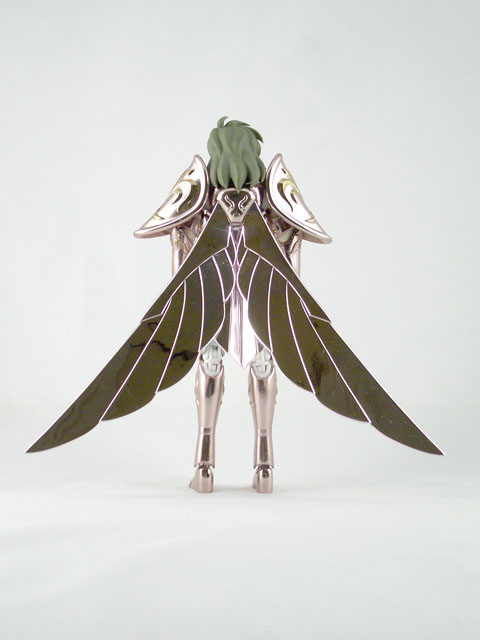 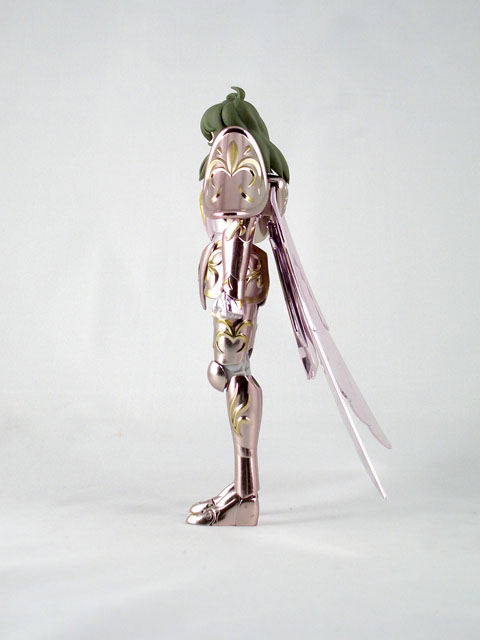 Being based in Hong Kong always sends over the metal plates that come out with the releases there. Metal plates are designed to attach to the official after-market stands. I don't always use stands but when I do I always display the metal plate on it as well. 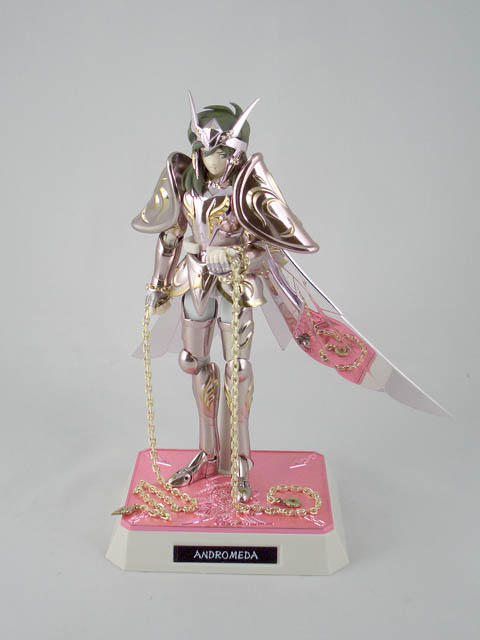 This release features a lot of metal with just the wings and head-piece being made of plastic and looks simply stunning on the shelf. Fans of the series should own at least one Andromeda Shun and I think the God Cloth is a good choice. Non-fans of the series will probably consider it a pass.

You know this never occurred to me until a few moments ago but Bandai pretty much uses the same basic body type for the SCM, SH Figuarts, and the Armor EX Gear series. Although I can't blame them too much, it's a very nicely designed body with lots of articulation.

And Atom: You really don't like Cygnus? He's my favorite man! Mind you I haven't seen the entire show but I've always liked like the ice motif.