So I decided to revisit this review becuase the original author, Josh, did not finish properly due to him having sold the toy before completing the review. In a weird twist of fate, I won this auction from Josh on Ebay a few years back, when I was a casual visitor of CollectionDX. So I am going to bring this back full circle by giving this toy a more in-depth review and a video review.~ SentaiSeiya

This version of Pegasus Seiya was sold at the autumn 2009 Tamashii Nations Expo. Only 600 units were available for sale. 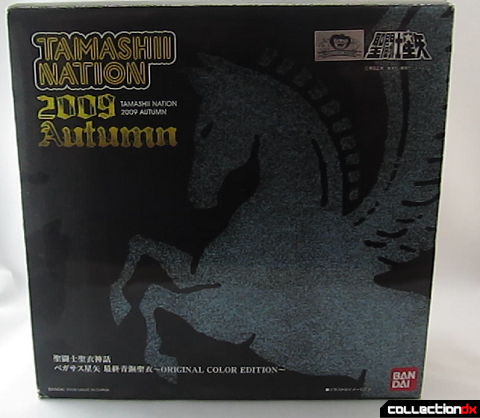 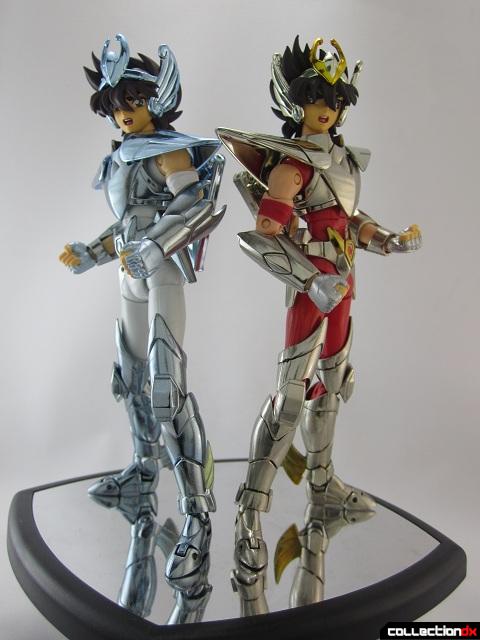 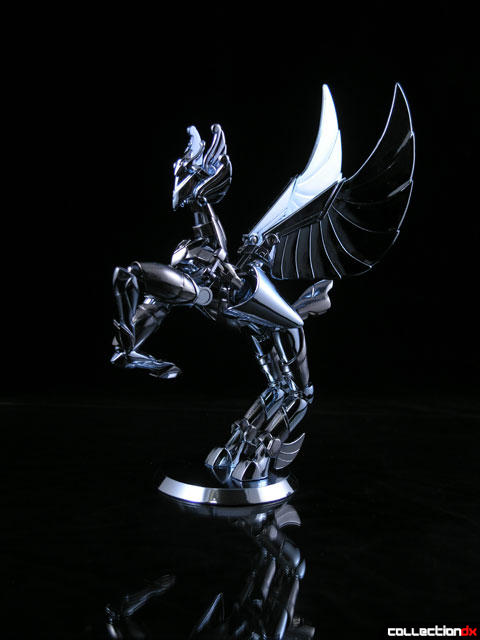 This version of Seiya’s armor is the one that he acquires hallway through the Hades story arc. Many refer to this armor as the V3 (Version 3) Cloth because in the anime, it is the third incarnation of Seiya’s armor. In the manga, however, Seiya has a couple of extra armor upgrades before this one, so the numeration is a little different in the manga. Either way though, it is still the final bronze cloth that Seiya wears.

This toy is the same as the 2005 Release of Pegasus Seiya, with changes to the color of the figure and armor to be more like the original Manga. 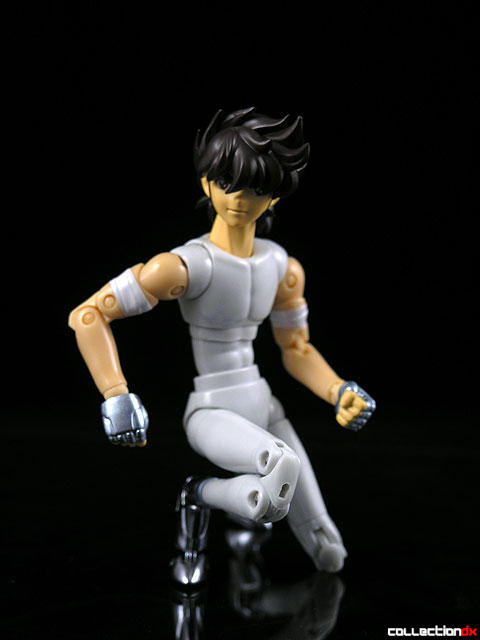 This particular Seiya is sporting a second generation body. Pictured is the neutral face that was included with the original Pegasus Seiya Version 3 figure. 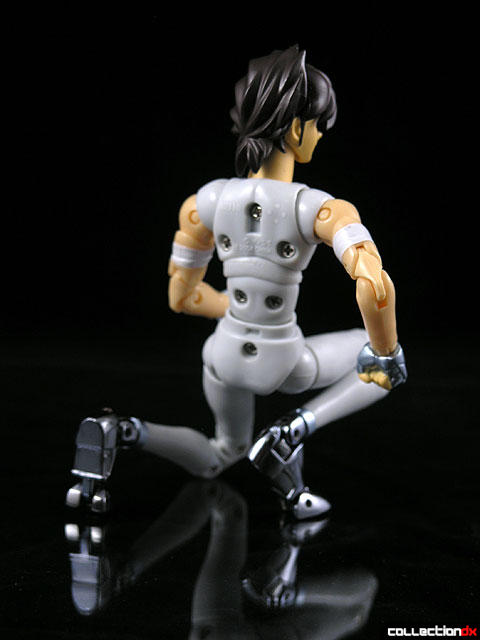 This set also includes the wings, which the Pegasus Cloth sprouts thanks to it being revived by the blood of Athena. The wings help Seiya cross the path leading to Elysion, which is reserved for the Gods. 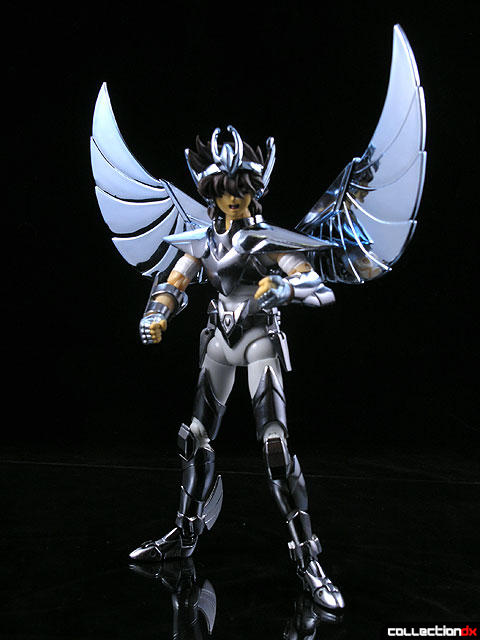 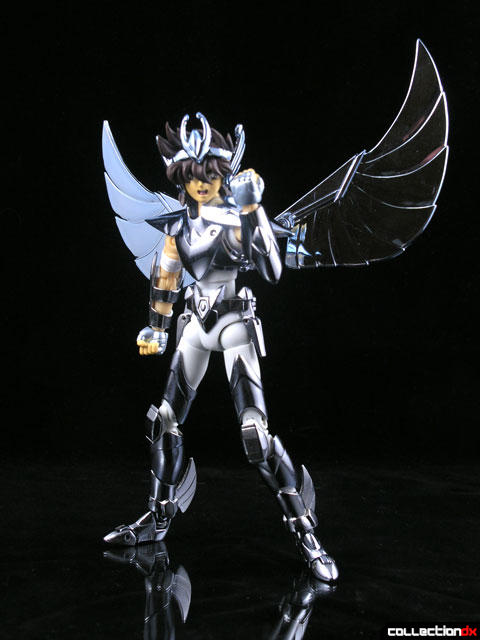 This face sculpt is the one that was included in this set that was originally released with the Appendix. 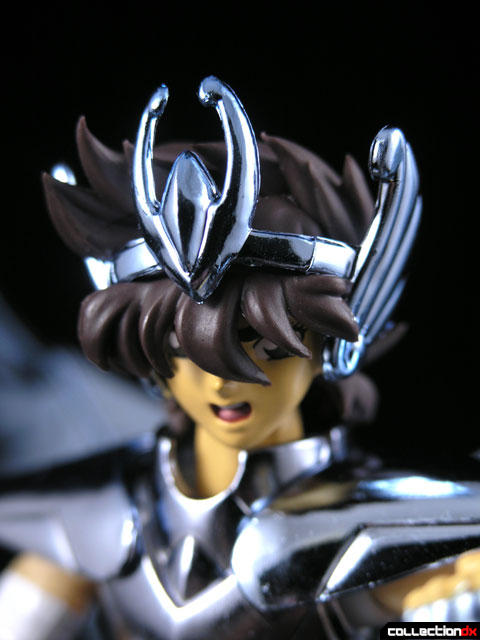 The headpiece is one of the few things of the armor that are made of plastic. The other two being the shoulder pads and the the wings (and the fins on the back that attach the wings to the armor. So I guess it's 3 other things). 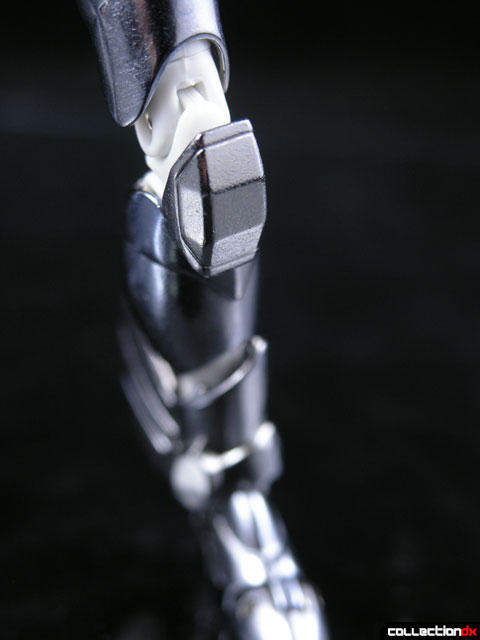 The rest of the armor is made of sweet sweet diecast! 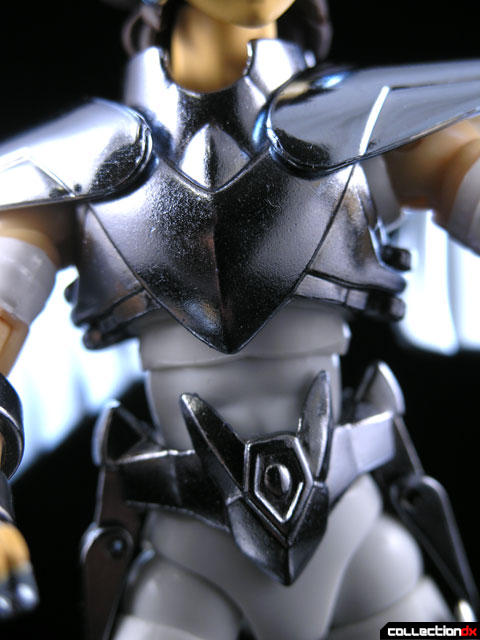 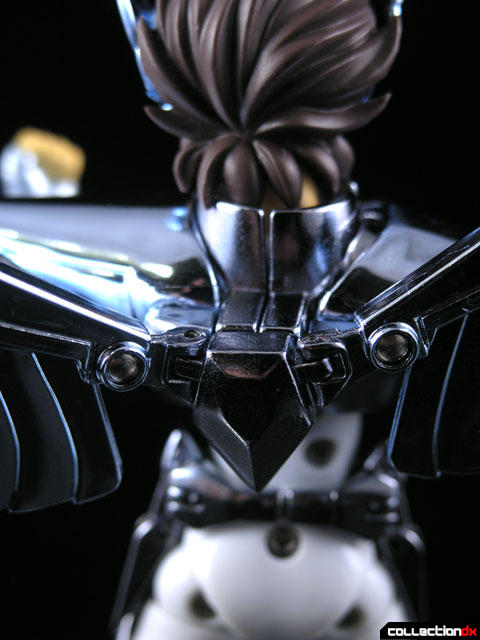 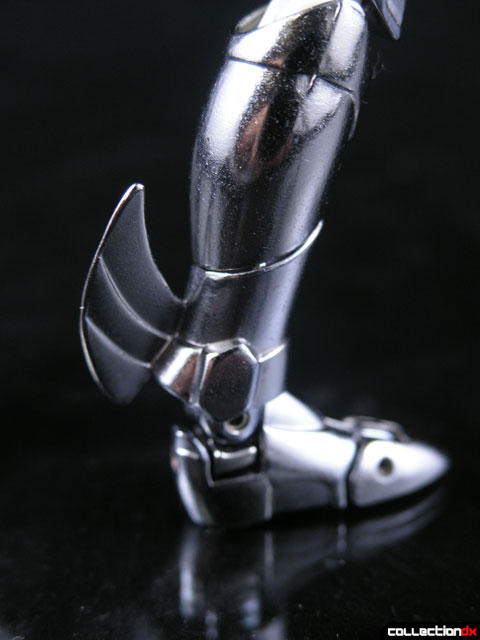 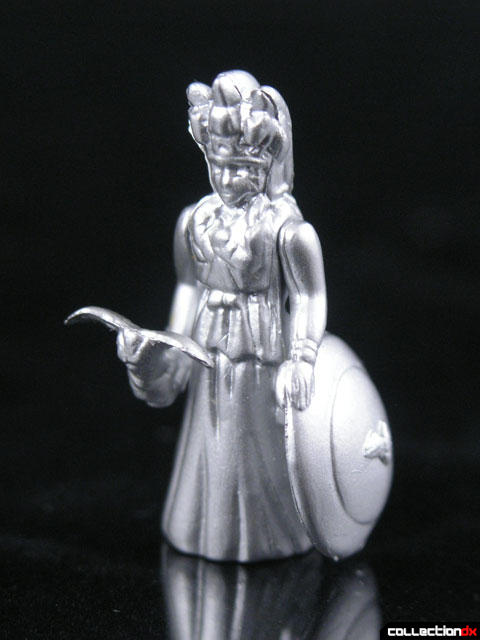 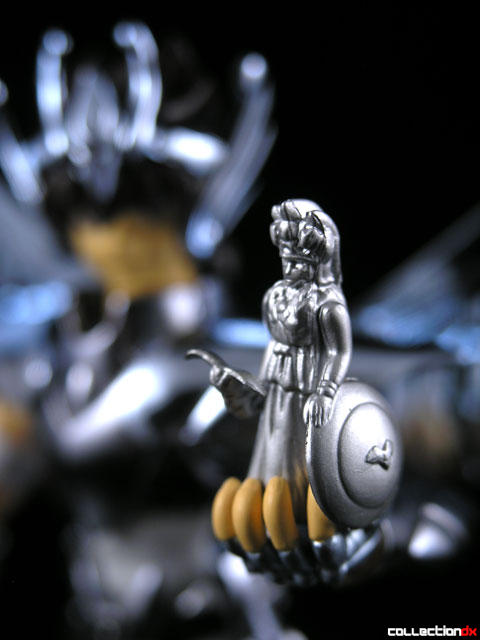 Seiya also comes with the nice mini-Athena statue that he is trying to deliver to Athena, who has decided to take the fight to Hades on his own turf. 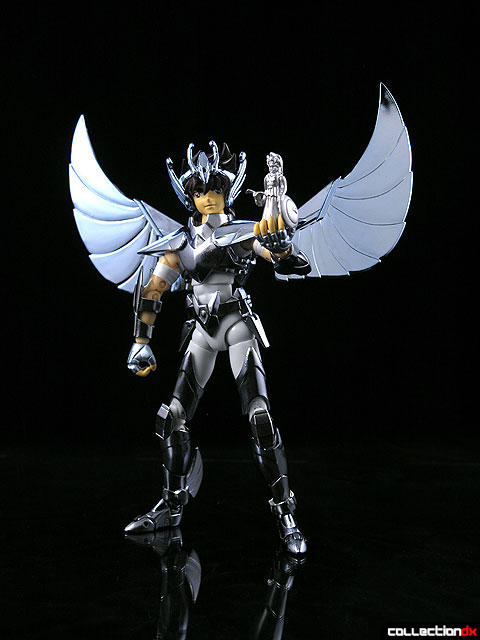 Bandai also included the Sagittarius headpiece that included with the V3 Seiya release. 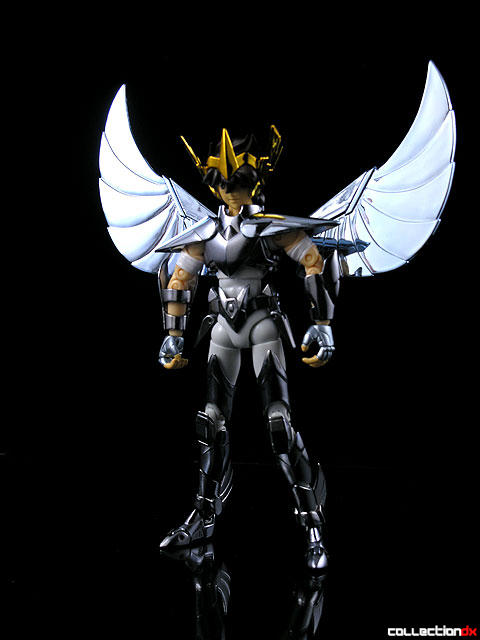 Included with this release is also the plastic chestplate, shoulder pads and "V" of the Appendix. 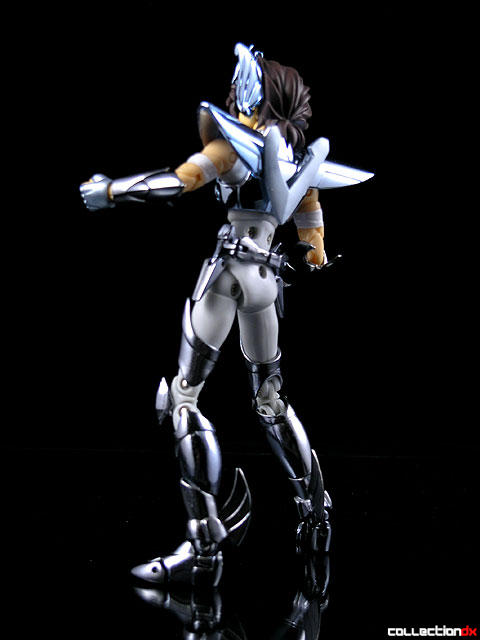 Also included is the extra shoulder pad from the Appendix that is battle damaged, to simulate when Harpy Valentine puts the hurt on Seiya. 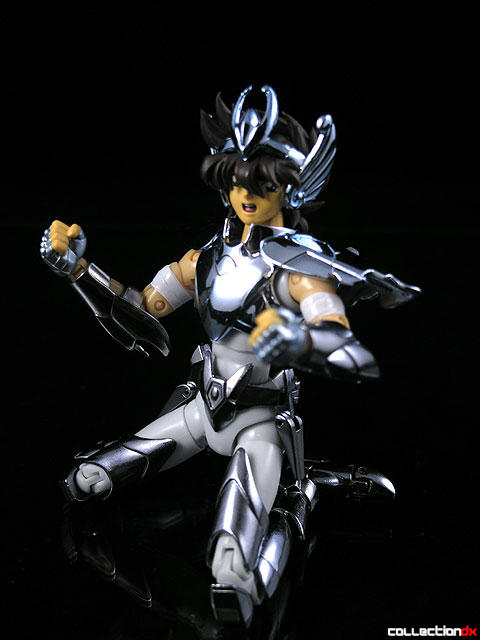 Although this release includes some of the content from the Appendix release, it does not come with the extra hands, which are very well sculpted and help convey more emotion for your action poses. 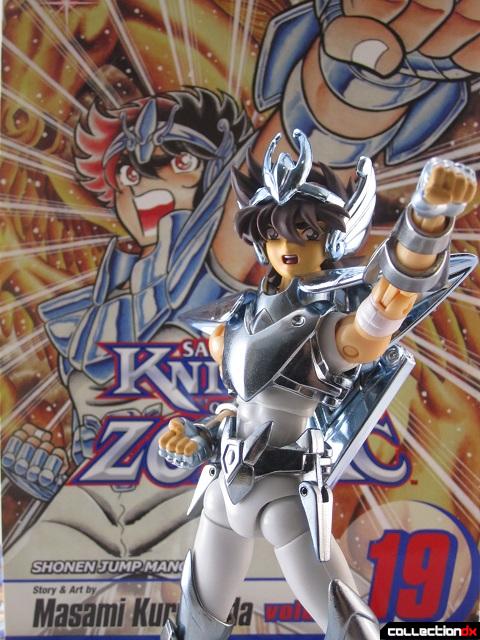 Check out my video review, which covers some of the aspects of this figure in a little bit more depth.

The figure is shiny and pretty sweet. What more is there to say? Too bad you didn't sell it to me.