As most of you know, I don't follow the Kamen Rider series. I'd love to, but there is just not enough time in the day. The same goes for Bandai's S.I.C. series: They look great, but I only have room for so many different toy lines in my collection. SIC unfortunately got the cut. But after meeting sculptor Takeuki Takeya I gained a new respect for the line and his work. While I still don't have room to collect the line, the opportunity came about to review this one and I took it. 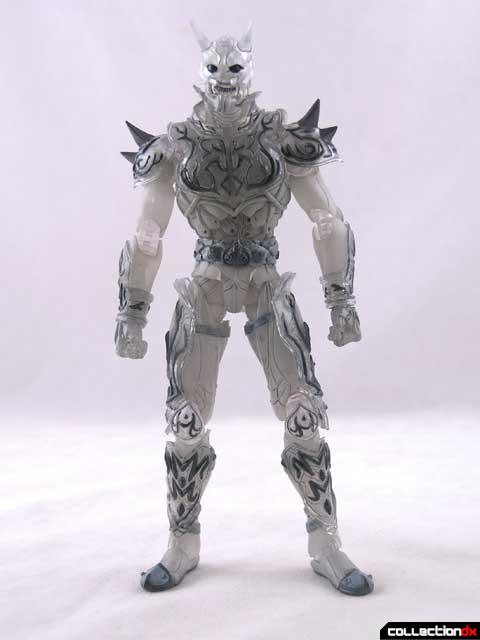 This particular S.I.C. is a Tamashii nations exclusive from Autumn 09. The normal version is red, this one is a milky translucent white. It arrives courtesy of Anime Export. 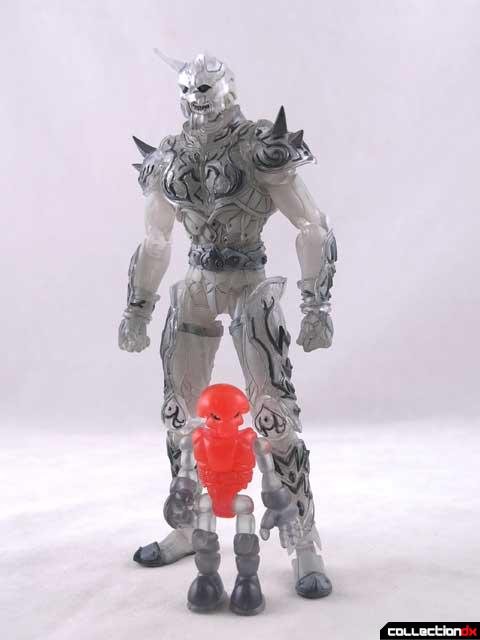 The character is Momotaros, one of the four Imagin - good demons that switch bodies with Kamen Rider Den-O to fight against the bad guys. At least I think so. When you see the regular version of this figure he looks like a demon or "oni" - you assume he is a bad guy. But then you see him posed at a dinner table, just hanging out, then he doesn't look that menacing. 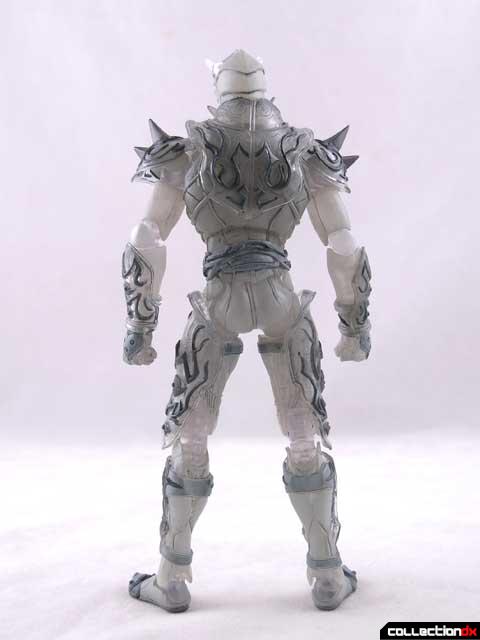 The S.I.C. line has come a long way from the early kikaider releases which were pretty much statues. These are fully poseable figures with Marvel Legends style articulation. And while the name has "Chogokin" in it, the toys barely do. On this toy, the only metal is on the toes. 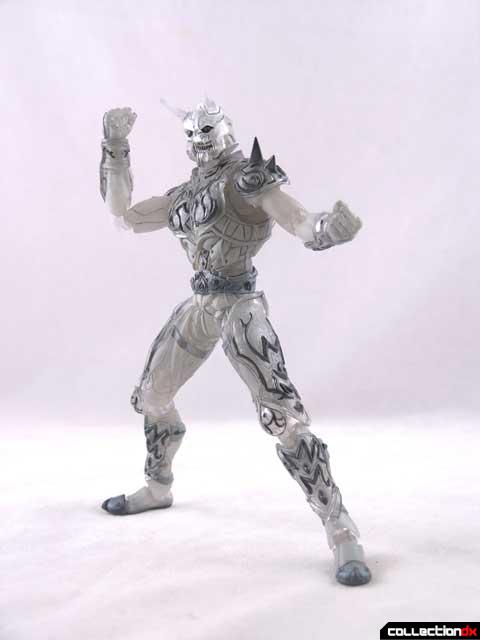 It's a good thing the figure is cool as hell, I can overlook the lack of metal here. Articulation is insane, it can pull off pretty much any pose you want. There are almost no accessories aside from variant hands and variant face masks. Actually, Momotaros looks great with no mask at all! 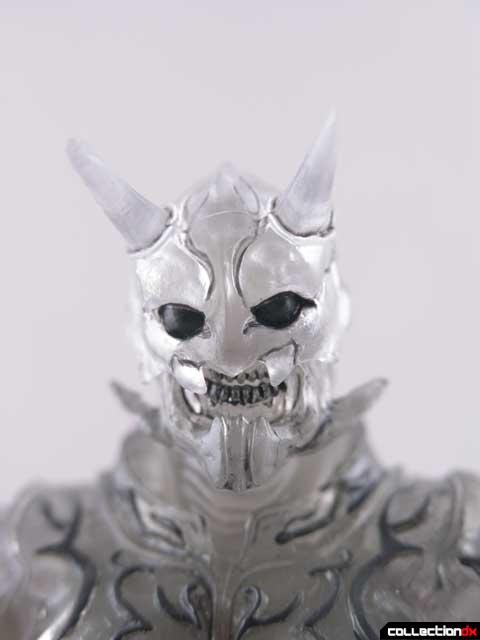 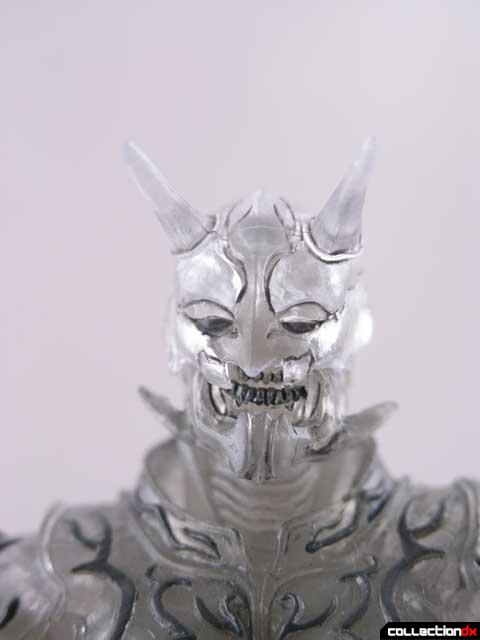 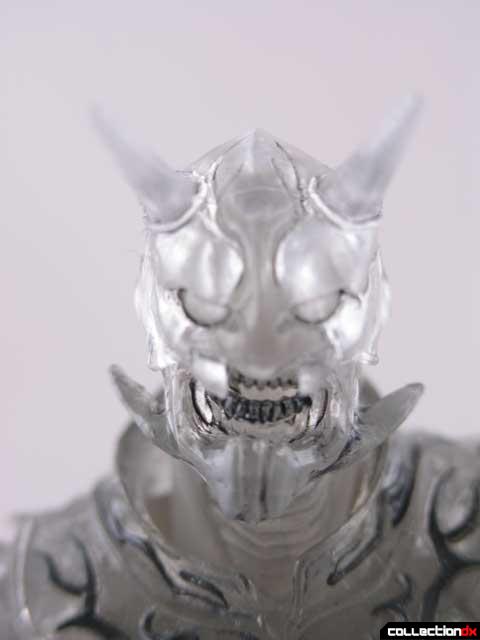 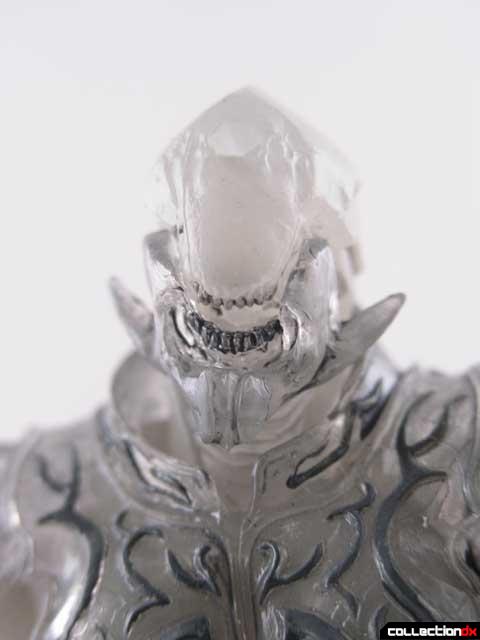 If I have any complaint about this figure, it is that it may almost be too articulated - the joints get loose with repeated posing and it makes holding a pose difficult. 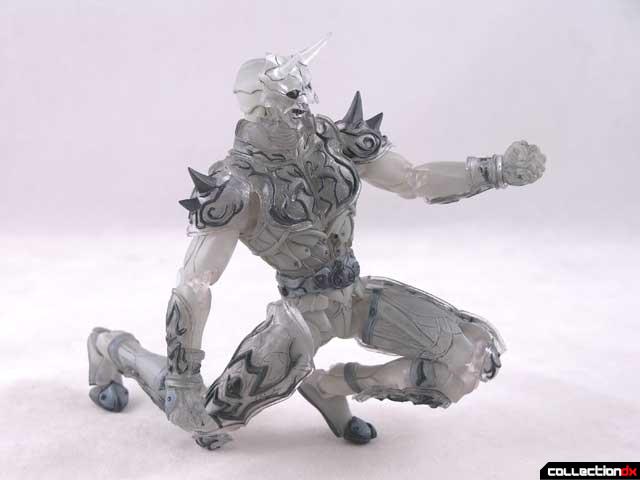 Of course there is also the issue of it being a limited edition release, so that can be a bit frustrating. 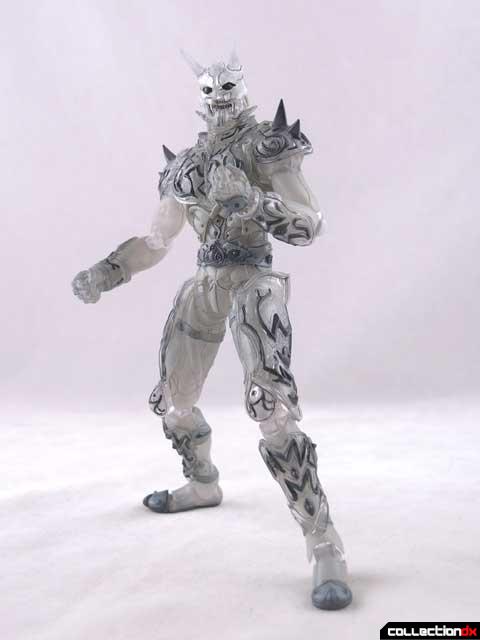 This sample came from Anime-Export, who somehow manages to get the Tamashii Exclusives in stock. If you want one, that's where I would start looking. 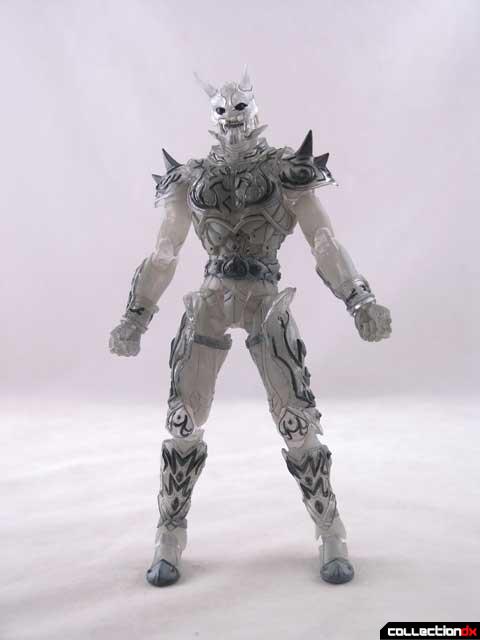 12 comments posted
'I start the way I finish-

'I start the way I finish- at a climax!' is Momotaros' motto when he becomes Den-O Sword Form.

Den-O World, like all the others in "...Decade", is all twisted-up & contorted compared to how it's own series runs, but most of the rules are the same...

Imagin are monsters that can travel through time by using a human's precious memory against them. This way, they can travel to the past [where that memory originates from] and destroy the world. Den-O uses a special mind-reading card to determine the exact point where the memory takes place, and uses the DenLiner train to travel to the past & stop them.

Momotaros is one of four (okay, six) Imagin that choose not to fight against humans, and instead bond with the human who is chosen to use the Den-O powers. (When Decade was in this World, the main Kamen Rider character was nowhere to be seen, so Momotaros instead inhabited random people in order to fight as Den-O; hence his worn-out-yet-desperate determination. You can see in the video above that he merged with Kamen Rider Kuuga without realizing who he was. The funny part is, Kuuga didn't know who Momotaros really was, and accidentally kicked him instead of the Alligator Imagin!)

In case you tl;dr'd, essentially:

These Imagin peeps generally need to make a verbal contract with someone to go into full colour. Before that, they are made out of the grey sands of time, hence this guy.

Why bother putting metal in just the toes? I would think that at the very least, these SIC guys would have metal feet for balance, and ideally joints for durability.

They must actually be joking with us right? JUST THE TOES??? More like Soul of Imaginative Fauxgokin! Nice figure but- please don't contribute to the desecration of the Chogokin legacy. PLEASE?

Way to be narrow minded. Yeah, I'll admit, poor naming on their part. You don't have to go all "it's destroying everything that it means to blah blah blah fanboy."

I don't think it's "close minded" to assume by the name the toy would have a little more metal in it.

Alright, lemme put it this way. It's close minded becuase SIC is a branch off of the SOC brand. Now, I just now realized that this is the first SIC on this site, and that might have something to do with it. But just because they normally make high metal content pieces doesn't mean that they don't have stuff that isn't. It'd be like looking at a hat made by Nike and asking, "Where's the rubber?"

Another argument might be that a chogokin, by definition, should have plenty of metal. Unfortunately the brand is called "Soul of Chogokin." Guess they just wanted to keep the same naming mechanic.

Haha, yeah, I mean it's not like that, say, the SIC Akumaizer 3 set was reviewed here a while back!

Now I'm just being mean. I don't necessarily agree with SIC being an SOC spinoff- I though it more harked back to the era of tokusatsu chogokin.

To start with, you could be a little more respectful Mechaninja. This site is to comment on DX reviews, not for ripping on members.

First, I am far from a "fanboy"
Second, If you were to see the entire range of my collection, NARROW doesn't come close.
As for my mind?- hardly narrow.

And for this figure? It is barely technically a "chogokin" with its laughable metal to plastic ratio- period.
This figure should be : Super Imagine if we had some metal Content.
Like I said, nice figure- but not chogokin standards.
It's known as sarcasm in my first post. Lighten up a little man!

Still getting the name wrong. It's "Super Imaginative Chogokin". Even says so on the logo in the "toy line" link.

but my SIC Ryuuga and alternative zero were hefty they had a loet lot more metal than the recent ones at the price of lesser articulation compared to this guy... back in the old days of SIC there was at least a somewhat decent metal content....