In 2015, Earth is under attack from mysterious, powerful beings called Angels. Their origins and goals are unknown, but the focus of their attacks are on the post-apocalyptic, high-tech metropolis of Tokyo-3- a city designed to be a hidden fortress for the secret headquarters of the United Nations special organization NERV. What makes the Angels such an imposing threat is their ability to project and manipulate AT Fields- natural, invisible, omni-directional defensive shields which cannot be penetrated by any physical attack or weapon, including the most powerful N2 bomb. Learning of the Angels’ existence years earlier, NERV constructed a small group of advanced biomechanical robots called Evangelions to fight the Angels. However, only 14 year old children are capable of merging their minds on a near-spiritual level with the 700’-tall armored humanoids. Shinji Ikari is only one of a select handful who has been able to accomplish this. ...But he does not care. He has been push aside and ignored ever since his father abandoned him when he was four years old. And he does not care if he dies or lives, or if humanity dies or lives. Together with two female pilots in their own EVA Units- the confident, confusing redhead Asuka Langley Shikinami; and the curiously silent, red-eyed, blue-haired Rei Ayanami- the abandoned son of NERV’s Supreme-Commander must face his inner demons and find the courage to go on protecting humanity while fighting to preserve what little is left of his own!

A full twelve years after its debut in 1995, the anime series “Neon Genesis Evangelion” has remained a staple in Japan as one of the most dramatic and controversial; its fan-base ever vigilant for debate, answers, and new material. 26 episodes for the original series ended with pains after behind-the-scenes difficulties forced it in a different-than-planned direction, and so two films- “Evangelion: Death and Rebirth” and “The End of Evangelion” (both 1997)- sought to fix the deflated final episodes, but succeeded only in adding fuel to the fire. And so, in 2006, Studio Khara- founded by Evangelion’s creator, Hideaki Anno- took on the challenge of refreshing the work that had been started by Studio Gainax over a decade earlier, and bringing it to full blossom on the big screen. No longer restricted by a limited TV budget, the four films collectively known as “Rebuild of Evangelion” cover the length of the entire series- inviting new viewers, pleasing previous fans, and expanding & trimming all 26 episodes into four bite-sized chunks. Additionally, acting as a type of reboot for the franchise, “Rebuild of Evangelion” seeks to rewrite the ending of the original series and further expand what was not possible before- including new special effects-sequences, more-detailed scenes, and generally grow from both the mistakes of its namesake & long-standing fan input.

29-year old Captain Misato Katsuragi is the primary tactician and operations officer for NERV- performing a central and vital role during any Angel attack on Tokyo-3. This means that she is the voice that the Children hear in their Entry Plugs as they face off against the giant monsters. With a dedicated passion to eradicating the threat of the Angels, she is not, however, willing to do it at the cost of others- something that sets her apart from many of her superiors at NERV and which frequently puts her at odds against them. In addition to leading battles on-duty and coordinating NERV’s massive resources, Misato has taken on the responsibility of acting as legal guardian for two of the Children, Shinji Ikari and Asuka Langley Shikinami. Though she is clean and professional in public, in private she is a bit slovenly and leans towards binge drinking her favorite Yebitsu beer. In an odd twist, Misato adopted a new genetically-engineered warm-water penguin years earlier named Pen-Pen whom freely roams throughout her three-bedroom apartment as confidently as a fourth member of the small & sometimes-stressed household. As a teenager, she was heavily influenced by the fact that she was the only member of the 1999 Katsuragi Expedition to survive the direct Second Impact ‘meteor strike’ in Antarctica. To this day, Misato wears a small white crucifix around her neck that her dying father (the Expedition’s leader) gave to her as he shoved her into an emergency capsule. 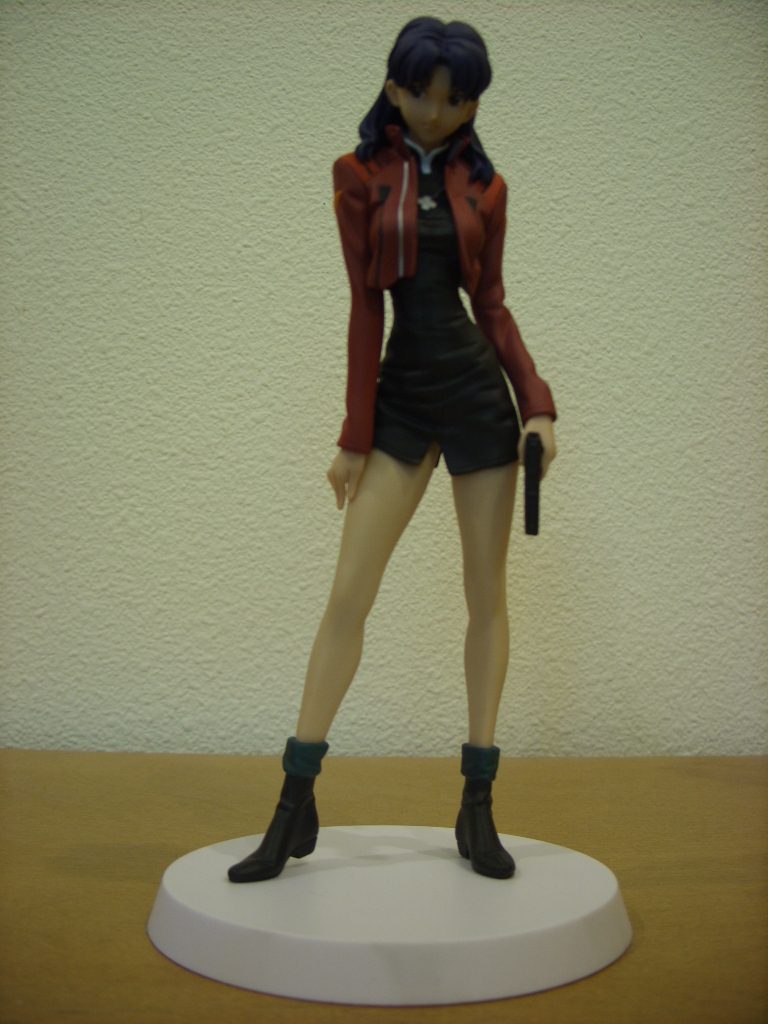 This figure of Misato Katsuragi is fixed-pose, and she stands comfortably on a simple white round base. Her left hip is swayed, and this emphasizes both her butt, and tightens her outfit along her torso even more-so than it already is. While the base is ABS, she is composed of primarily PVC, and her legs are ABS. But the difference in materials is only noticeable at close-range and with careful examination; the entire figure is painted and so none of the original plastic coloring seems to be exposed. Her body retains the same design-style used for all female characters in the series- long legs, pointed nose, and a noticeably-busty chest. 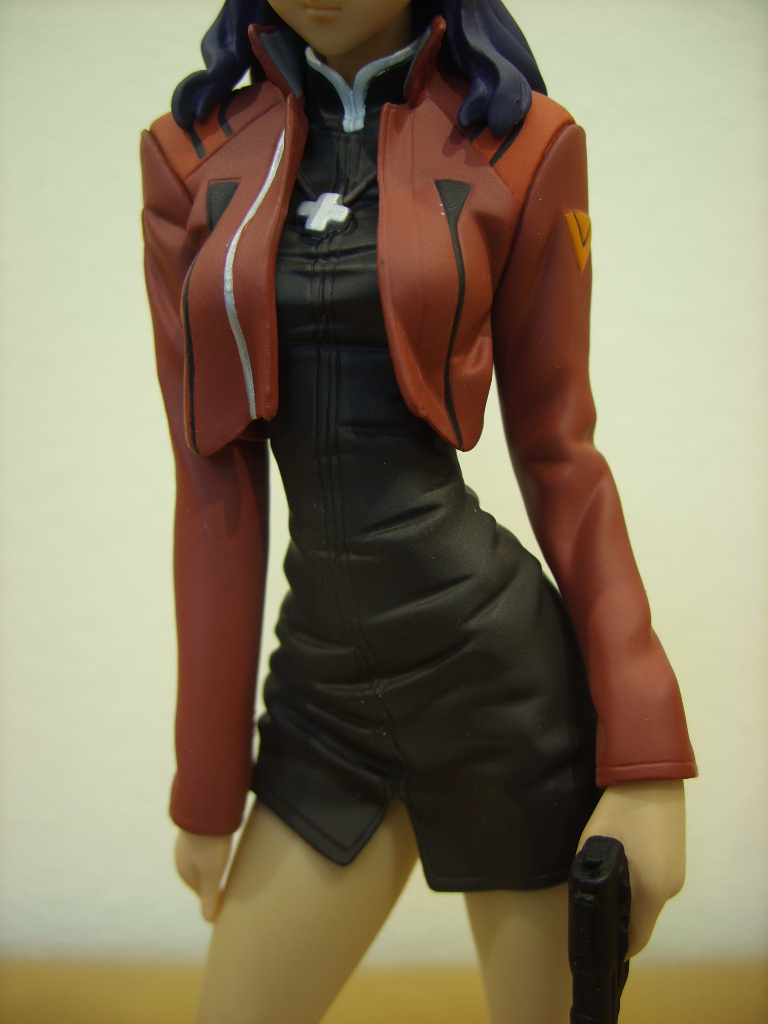 Misato is wearing her NERV-issue waist-high red commander’s jacket with dual muted-orange stripes on either shoulder, bright-orange triangular rank insignia on both upper arms, and upturned collar; though even open it cannot disguise the curve of her breasts. As usual, she has her jacket unzipped, so you can clearly see the thick white crucifix hanging below her neck. Her form-fitting black one-piece body suit is cut very short below her hips, and has a zipper line running from top to bottom. (If you absolutely have to know, she is wearing white panties.) She has short leather boots with individual zippers on both, and dark green socks folded over.

Misato’s shoulder-length hair is the only change from how it appears in the series. There, it is purple (though this is due to shading in the animation rather than Misato dyeing it), but for “Rebuild...” it is now very dark purple, almost-black. The figure here features no added paint highlights; but it still has the split bangs above her eyebrows. Her eyes are not painted, but rather stamped onto her face. She does not have any lipstick. 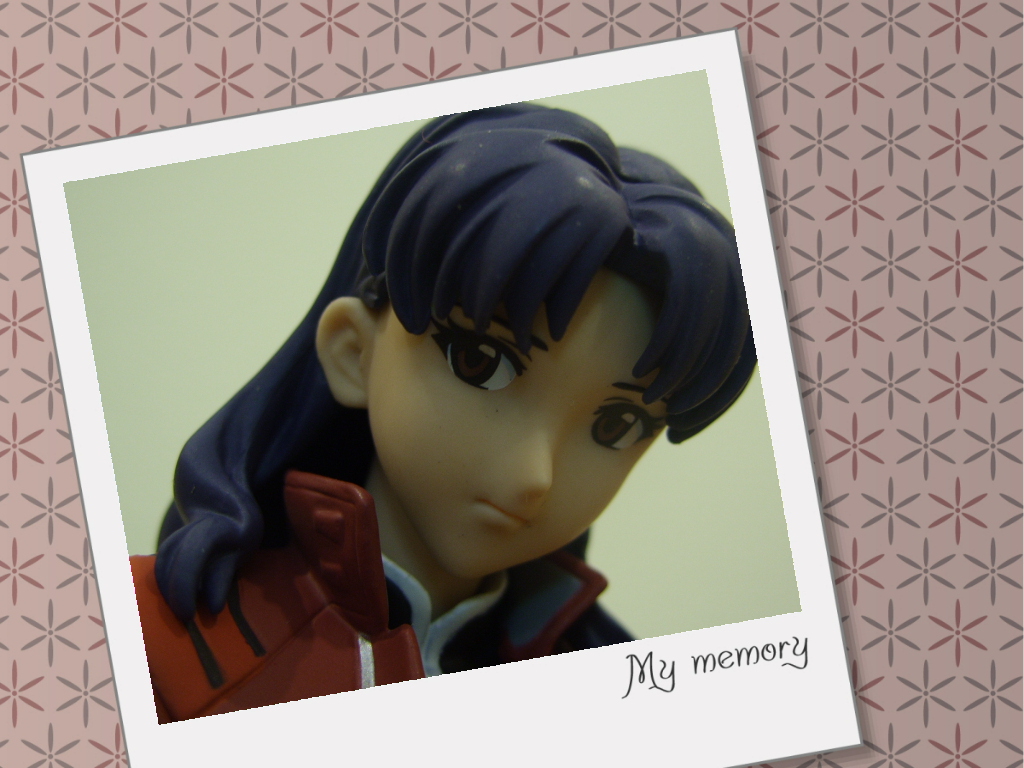 Though Misato is casually posed looking downwards, the figure reminds you that she is still a fighter, and so she is holding a black semi-automatic pistol in her left hand which cannot be removed. (My pre-review research has led to the discovery that, the few times that Misato wielded a pistol, it was a Heckler & Kosh USP. Comparing the accessory on this figure to images of the real weapon may be irrelevant, but the resemblance does seem quite close.) 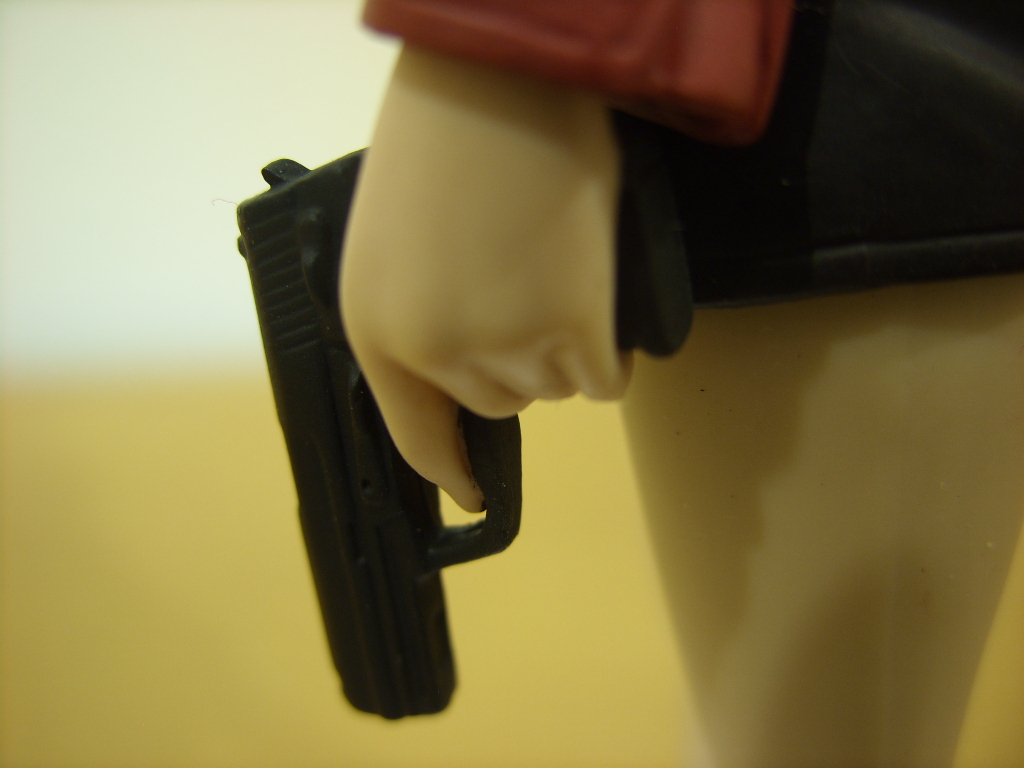 The sculpt is well-done, with both folds and creases in the plastic fabric(s), and strands highlighted in her hair. Her legs and face are also accurate. Mold-lines are not easily spotted even on close inspection (but I’m detail-oriented enough that I can still find them). The seams between the manufactured parts are well hidden except perhaps the piece used for her bangs. Paint applications are simple for a character like this, but well applied with no obvious spill-over. Equally-so, her eyes are detailed and flawless.

Standing only 8½” (20.5cm) tall including the ½” base, this is a fine example of how even a cheap figure from Japan can have excellent production quality. Though anything larger might be made of higher-quality materials and have detail shading painted in, for $15 you get a great deal: a faithful representation of the character for a low price. And at 1/6th scale, it takes up little space. That’s not surprising really, since the EX Figure Misato Katsuragi set (and companion EX Figure Rei Ayanami) is frequently found in UFO catcher game machines across Japan. 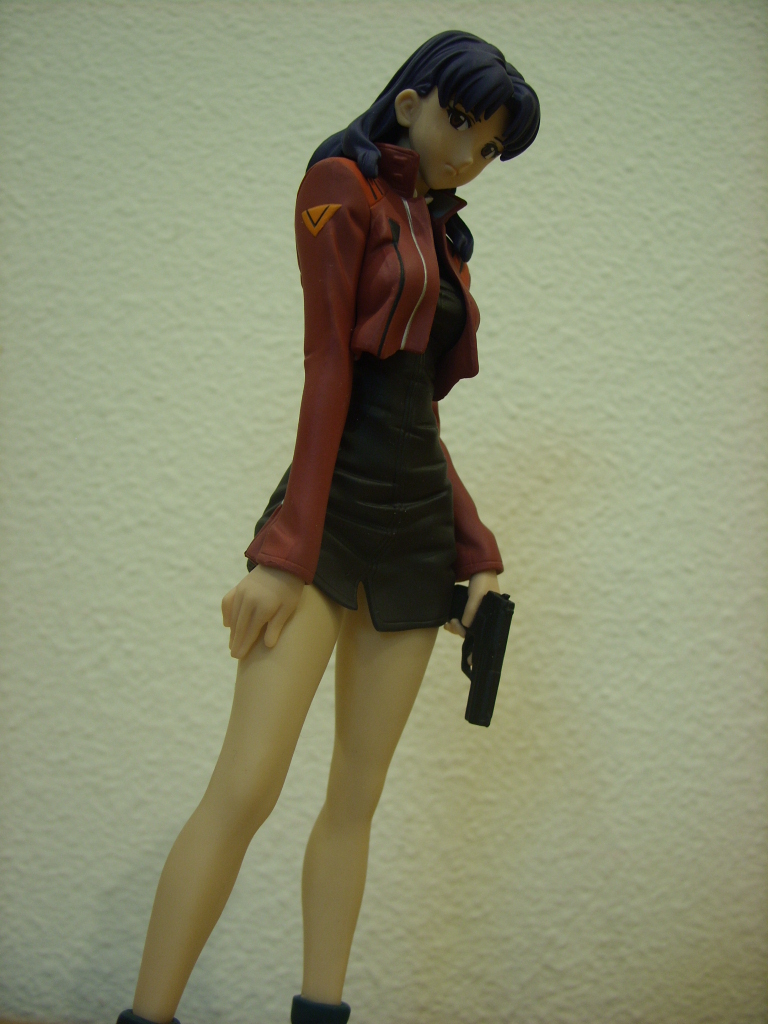