KOS-MOS is the enigmatic android war machine from the Playstation 2 RPG series Xenosaga. Her name is an odd recursive acronym meaning "KOS-MOS Obey Strategic Operation System" while her form of a busty young woman in high heels harkens back to the days when the Knight Sabers ran around in the similarly styled Hard Suits. KOS-MOS is arguably more popular than the game she comes from and has made a recent appearance in Super Robot Wars: Endless Frontier as a playable character. Her most notable features include long blue hair, red eyes, a vast array of weapons and an "interesting" relationship with her creator Shion Uzuki. Just ask the fans and they will tell you. 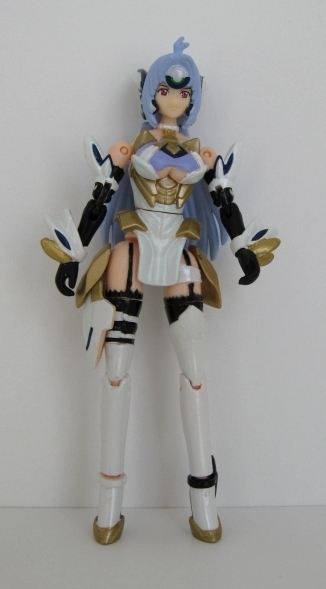 KOS-MOS is a fairly small figure. Easily at home with G.I. Joes or any similarly sized action figure. The paint work is adequate with the crispest details being her eyes. She is difficult to balance without her stand (you would be too with those heels). The box boasts that this figure has 23 points of articulation. These include double jointed elbows, knees, ball jointed ankles, swivels in the upper arms and wrists, and a ball jointed neck. The joints themselves feel cheap. Lots of flesh color pegs are apparent in the arms and legs. It all adds up to a very average figure. 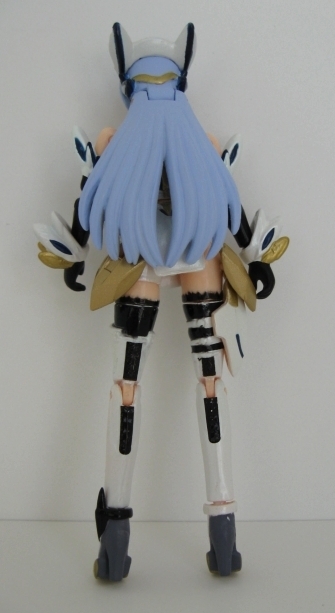 From the back we can see the soft details of her hair. The hair itself is hinged to allow for some flexibility in posing. 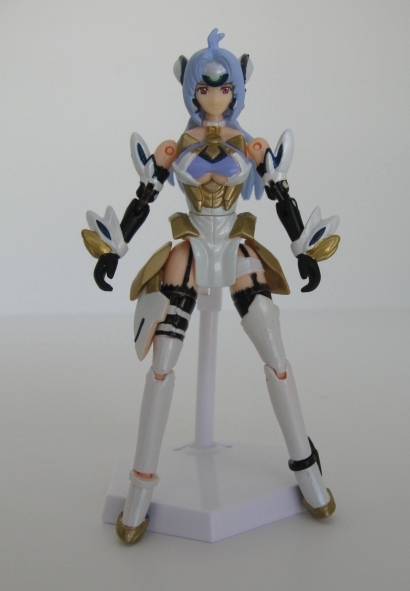 KOS-MOS's stand plugs into a screw hole in her back. It is a simple stand with only one main joint which attaches to the hexagonal base via a ball joint. She really can't be posed too far off center without tipping over so she is limited to generic fly poses. This is a far cry from the crazy maneuvers she does in the game. 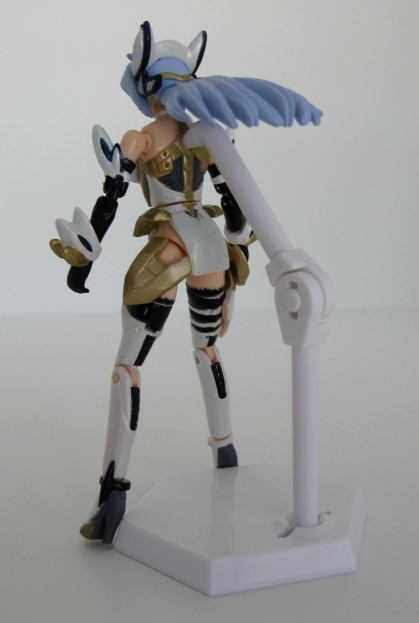 Here you can see where the stand plugs in. Unfortunately the combination of the stand and KOS-MOS's hair makes posing her difficult. Also I found that KOS-MOS's head isn't terribly secure on its ball joint. 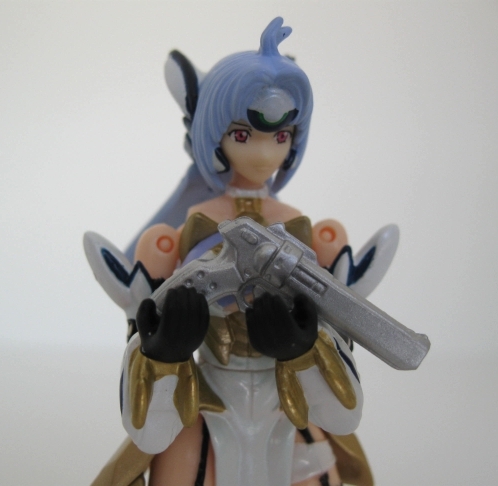 KOS-MOS comes with a magnum sized handgun. In theory the gun is to be held by one of her open palmed hands by jamming it between her thumb and forefinger. It really doesn't fit that well. 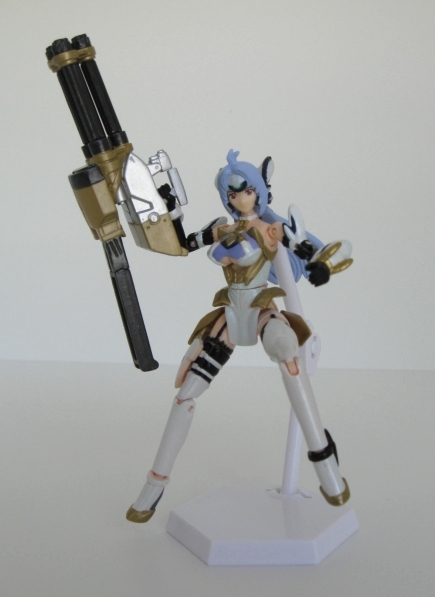 KOS-MOS also comes with one of her signature triple Gatling guns. She comes with a pair of gun holding hands. To use the gun, the handle must be removed and the hand threaded around the handle before it is reattached. The gun itself is kind of heavy for the figure to hold. 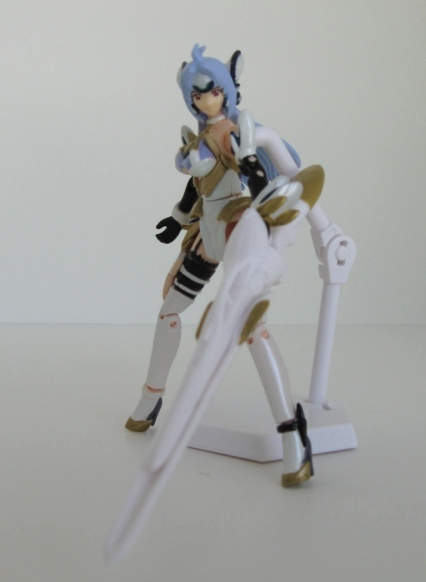 KOS-MOS also comes with her Dragon Tooth energy weapon. The top part of the weapon is removable so that a hand may be fitted so KOS-MOS can wield the weapon. 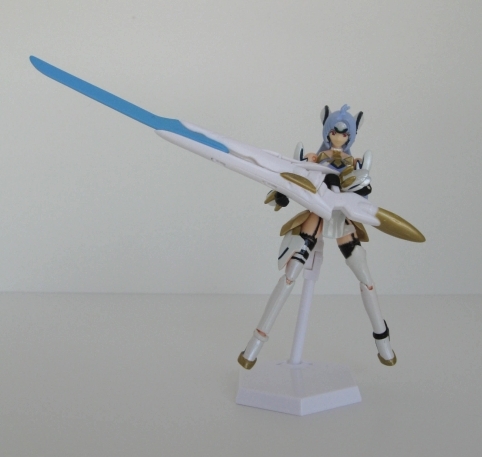 By swinging out the bottom portion of the Dragon Tooth you may then attach a energy blade. The blade itself is molded in flesh colored plastic and is painted light blue. Other than making the weapon look more complete, the cheapness of this accessory leaves one wanting for a proper clear blade. 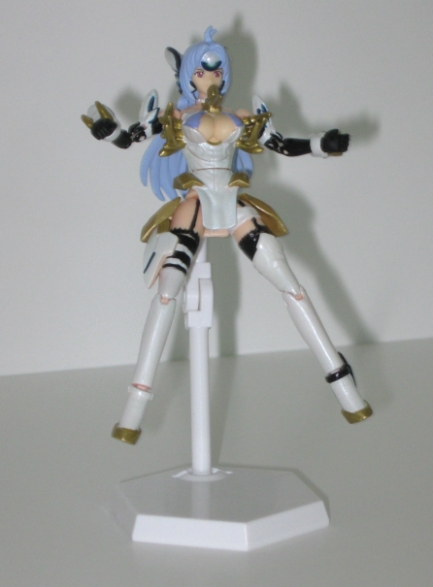 Before you continue I must point out that this accessory does not come with KOS-MOS and is instead included with the T-ELOS figure in the same line. Bandai decided to swap the optional chest parts of each figure in order to force you to buy both.

For the life of me I cannot actually remember the name of this attack. Really it should be called "cleavage buster" since the attack consists of a small blade (which is comically over-sized on this toy) flipping out from her sternum and cutting open her top while the little gold bits around her chest flare out. From there a sparkling energy ball flies out at her target. 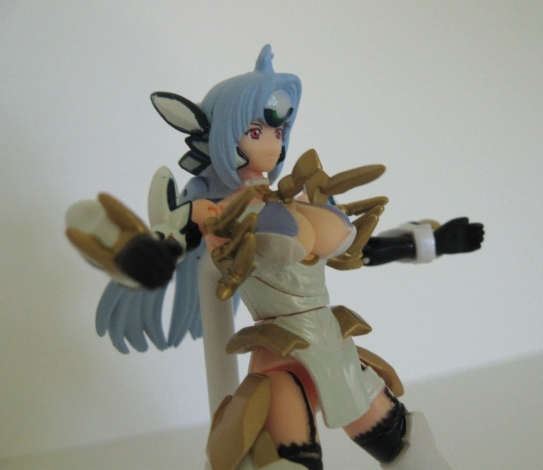 The overall effect is very lackluster on this figure. The gold spires around her chest are made of PVC and as such are totally bent out of shape while the miscolored knife looks really out of place.

For the first action figure of KOS-MOS the Motion Revive Series toy is very lackluster. It feels like a cheap prize toy yet the original MSRP is 1500 yen! Most stores have heavily discounted both KOS-MOS and T-ELOS. Get one if you are really desperate for a KOS-MOS action figure, but honestly this toy only makes me wish someone would do a proper Figma or Figuarts of KOS-MOS.