I just realized something.

I haven't seen the movie that Jet Jaguar is from ("Godzilla vs. Megalon") since I was a little kid. I really need to reacquaint myself with this one. Besides Godzilla himself, I think Jet Jaguar might have been the one character from all those old kaiju films that really stood out to me. And watching this awesome German trailer doesn't hurt either..

Anyway, this toy. The first thing that comes to mind about it is that it's long overdue. M1 first released a standard size Jet Jaguar in 2000, but for some reason waited all this time to release a movie accurate color scheme. 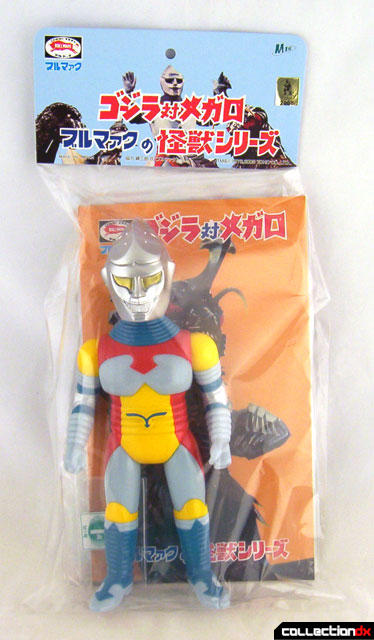 However, now that it's out, they've gone and released it twice. Or at least I think so. Initially, the figure came out in December of 2008 and the one reviewed here was released just a couple weeks ago. But my specimen looks to have a grayer body than the previous one, which seems to have a more bluish tint to it. I'm not sure if it's just lighting/camera differences that cause that or if they are really two distinct colors. Either way, if they are different, it's not by much and either one would be fantastic. 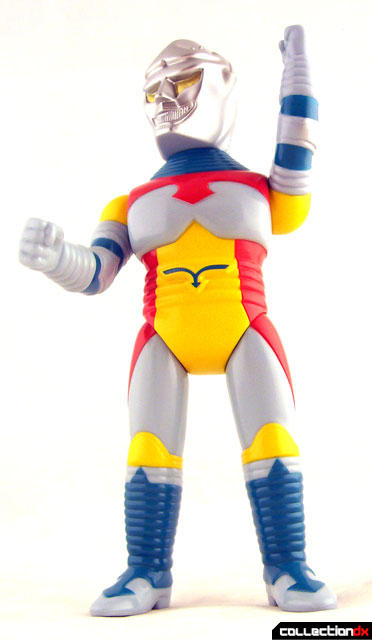 Jet Jaguar is based on the original giant sized Bullmark figure, but stands only 9.5" tall. According to Club Tokyo, Bullmark never made a standard size Jet Jaguar sofubi, making it all the more unusual that M1 would keep people waiting so long for this!

There are only 5 points of articulation here (hips, shoulders and neck) but that's really all we expect from a vinyl. Though we don't expect great articulation from a vinyl, we DO expect a great paint job from M1 and rest assured, they'd don't disappoint. However, it's not a perfect job. If I wanted to be really picky, I could point out a couple of spots where there's some color where it shouldn't be. But you know I'm not that type of collector. Especially when they did such a detailed job on the arrow that points to his crotch (and what's up with that anyway?!?!) 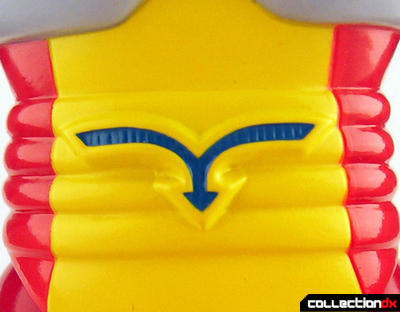 Jet Jaguar comes bagged with a header card and a two-sided backing board that is also apparently an homage to the vintage Bullmark. Honestly, I'm not sure how I feel about the backing board style of packaging vinyls. I've got a few, mostly from Max Toy Co, but part of me wishes I didn't have more extra packaging to store away. I haven't really made up my mind about it. I guess I'll just have to buy some more until a decision is reached, eh?

This is the third Jet Jaguar vinyl in my collection and I finally feel like I have one worthy of the character. I already had the Marmit Vinyl Paradise one that I scored from Sanjeev at the 2006 Summit and also the Bandai Movie Monsters version, which, while it's really cool, is just not my style as we previously discussed. Now I just need a really cool Megalon to go with it!

Thats my kind of Vinyl! Thanks for the review!

Great toy, Dave! The photography is clutch. Nice to see such clear shots of this thing. I noticed, however, that the color scheme IS a bit off (which, I think, you were alluding to). The arrow point to his crotch is actually supposed to be silver, not blue...and the raised border around it should be blue, not yellow like the rest of his abdomen. But the REAL issue is his eyes: they're supposed to be black! Oh well....doesn't detract from how good the toy is/looks...just funny that they changed those things!

Woops.. you're right. But perhaps I should just change my wording to "bullmark accurate" instead of "movie accurate", since that's what it is.

Cute figure... the only thing I don't like is the oversized head. I'd probably dig this more as a neat vinyl figure if the proportions were more realistic, but the funkyness and fun factor are pretty apparent in a simple figure like this.

Thanks for putting this up, Dave. Nice shots. This seems to be a real shelf-attention getter with the POP colors.
I don't chase after vinyl too much, but for JetJag, I make the move, because as JoshB pointed out in his Bandai review, there's no available diecast!! ARRGH! Jet Jaguar is a cool, more unique character, in the Godzillaverse anyway, and it kills me that nobody realized the sales potential of at least a gimmick installed, or chogokin release, preferably.
The Ultramen had gokin, and even rubbery dinosaur monsters got the gokin treatment by several companies, but JetJaguar? NOOooOOO! (Giant Toy Company, are you listening?!) Sorry for off topic rant. =oD

As for buying one, Dave, where did you get yours from? Thanks.

I got mine at Hobby Search, but they're sold out.

Jet Jaguar 6" Vinyl Figure by Bandai is a favorite accurate in detail and size. But I'm sure you knew that.

You know,I really need a figure of Jet. He's definately one of my favorites,I love the way he "programmed himself to grow in some way" as the dubbing helpfully states.
"Don't touch my bags if you please,Mr. Customs Man."

Just to add to the Jet Jaguar comments, one other popular figure of this guy is the Kiguru-Microman set with Megalon. I've never handled one in person, but I've heard pretty good things about it. Not exactly my style, but folks out there may dig it!

Oh, and because this really should be posted in *every* review... ;)

...now I have to locate that record!

I actually have the Godzilla 54 of those rubber-suited micromen,but I've left it mint in package,since I've heard about so many people having a hard time getting the suit on.

Jet Jaguar, Jet Jaguar..
His mother never loved him much

If you get the joke, you get a cookie