The tenth Heisei Rider, Kamen Rider Decade, is an anniversary show that revisits previous Kamen Rider continuities. It is also a marketing opportunity for Bandai to revive interest and sell items related to past shows.

So….Happy 10th anniversary, Kamen Rider! As Toei and Bandai’s resident money maker, they didn’t hold back on merchandising their tenth Heisei Rider… Good thing, too, otherwise we wouldn’t have gotten so many awesome toys.

First a bit of background – Kamen Rider is a Japanese superhero show/franchise aired in 1971 (referred to as Showa era), starting with “Kamen Rider.” Since then, a new Kamen Rider show has been released yearly. The show took a break in 1990 and came back in 1999 (starting the Heisei era of shows) with “Kamen Rider Kuuga.” While there have been so many shows, the premise remains relatively unchanged – motorcycle riding costumed superhero (Kamen Riders) fights evil organization of rubber-suit monster. The gimmick of the show is that a particular theme/motif dominates the Rider’s appearance, abilities and items. Almost all Riders transformed from a civilian guise to their hero counterpart using a transformation item, referred to as a henshin device, such as the item on today’s menu: the Henshin Belt DX Decadriver. 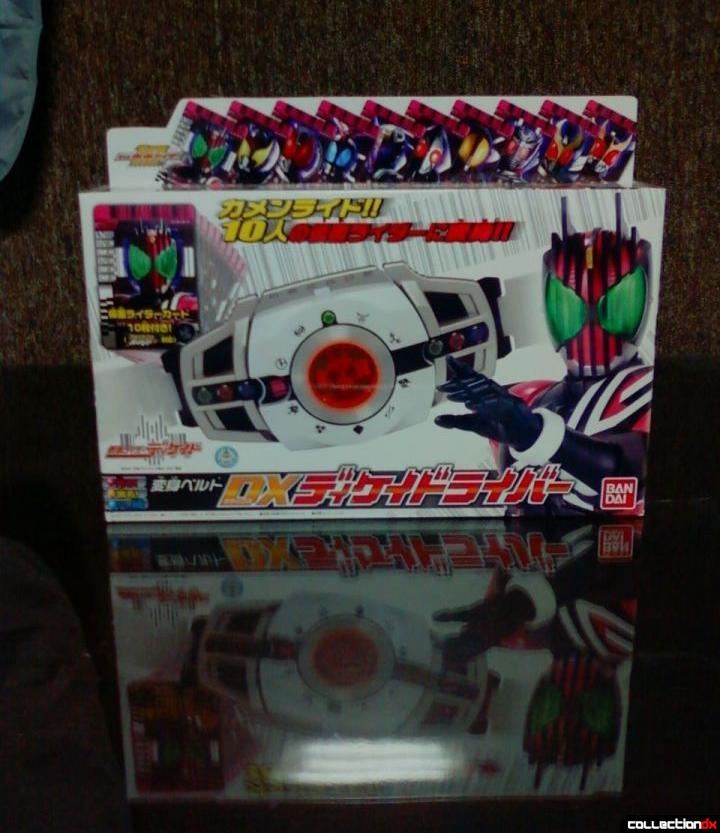 Used by the protagonist of the show to transform into Decade, this is the henshin device of the titular character. The plastic belt is small, fitting only 48-68cm waist, which is expected from a toy marketed to children.

Excluding the 3 components that are part of the waist strap, the actual “toy” is the buckle which consists of 2 separate components. 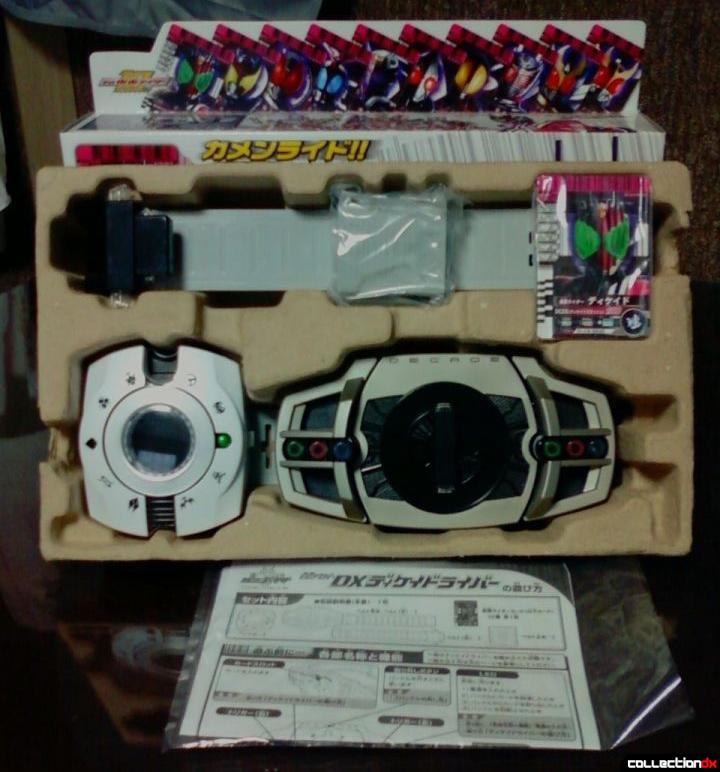 Everything has a nice sturdy feel with decent heft. There is very little in terms of paint apps and most parts are molded in color. There are exceptions such as the faux green LED above the clear window and the 9 Kamen Rider logos around the silver ring. Construction is clean and the flash from where the plastic was cut are in discreet spots. The toy also comes prepackaged with 10 cards, each representing a primary Heisei Rider. 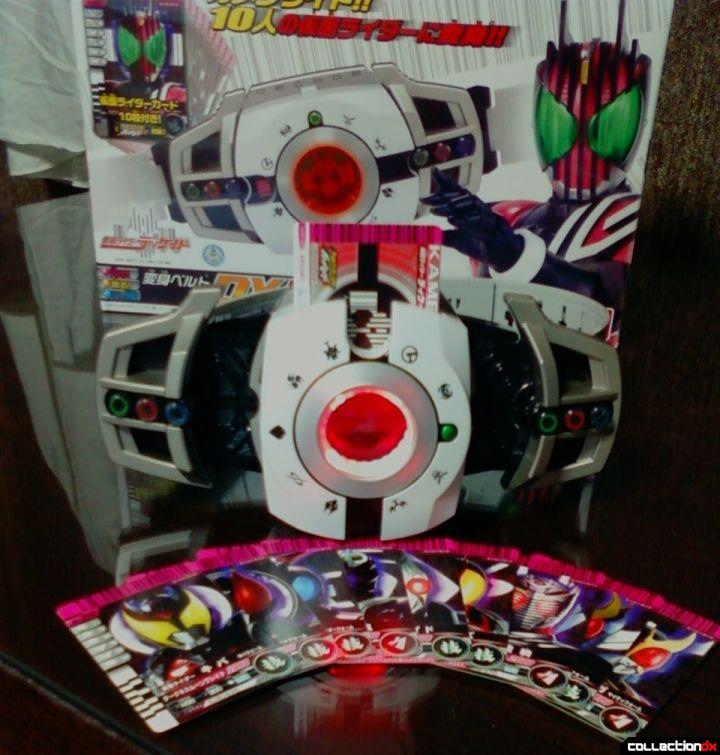 Essentially, the Decadriver is a belt with a movable buckle. Pulling on the grey handles on either side of the belt rotates the white “box,” which is an electronic card reader, revealing the card slot. 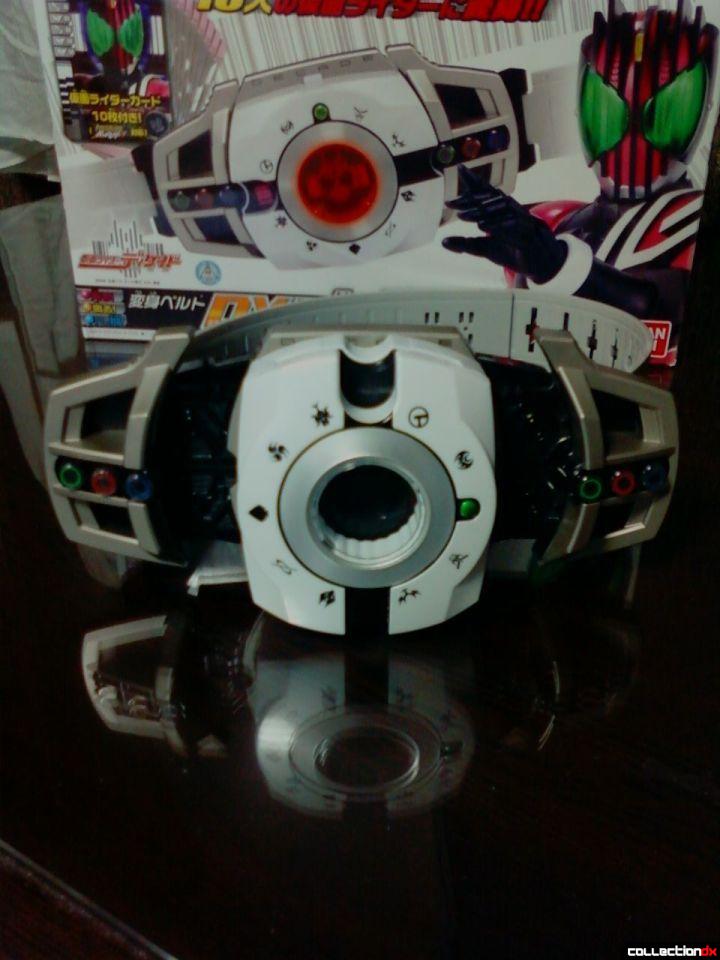 Pushing the handles together returns the “box” to its original position. 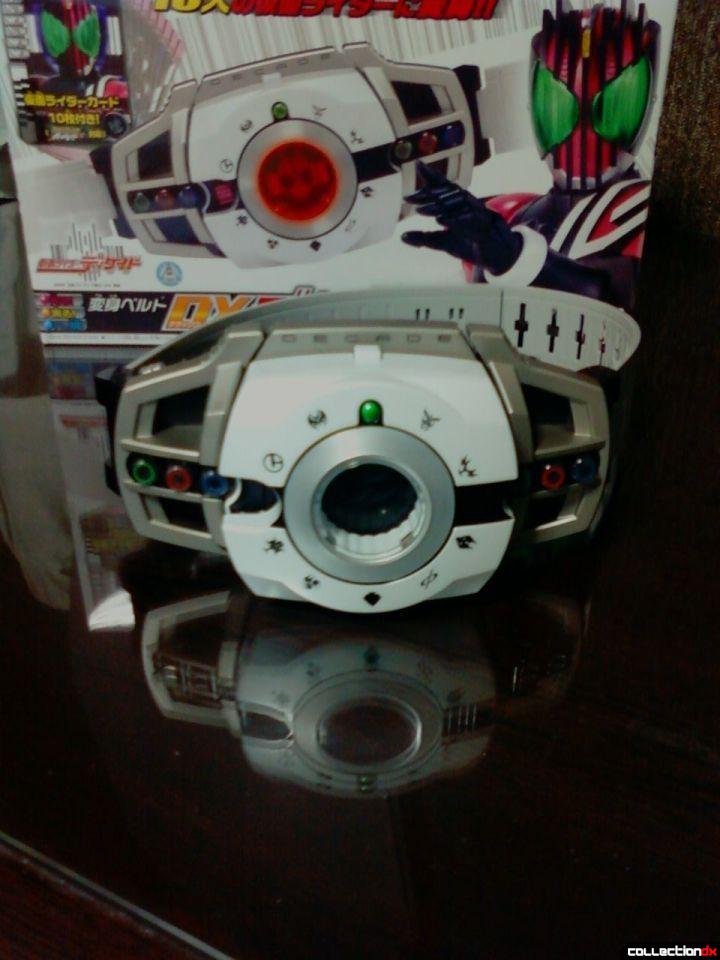 To avoid redundancy, the original position will be referred to as “closed” and the turned position (giving access to the card slot) as “open”. 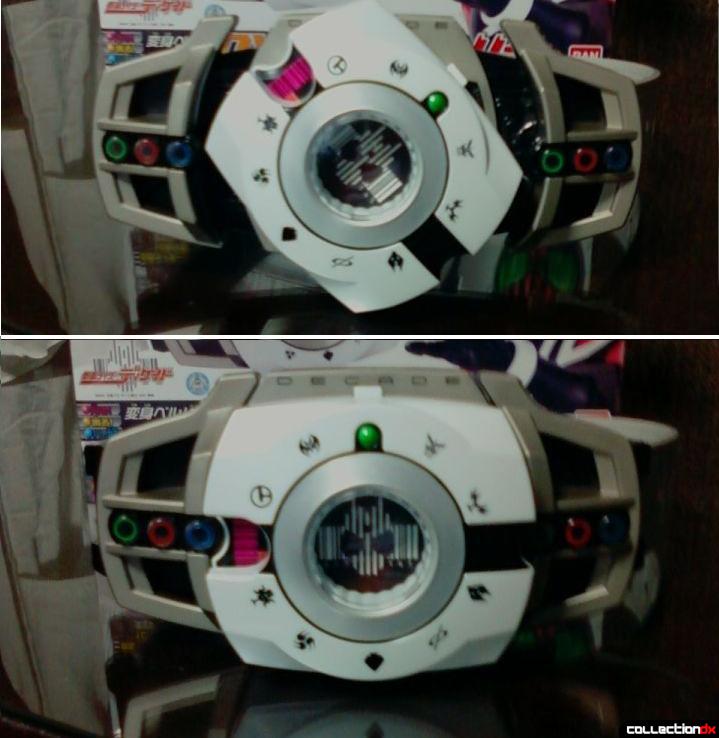 Just like in the show, power up the Decadriver with 2 AAA batteries and flip the power switch on the bottom (okay…maybe unlike the show). 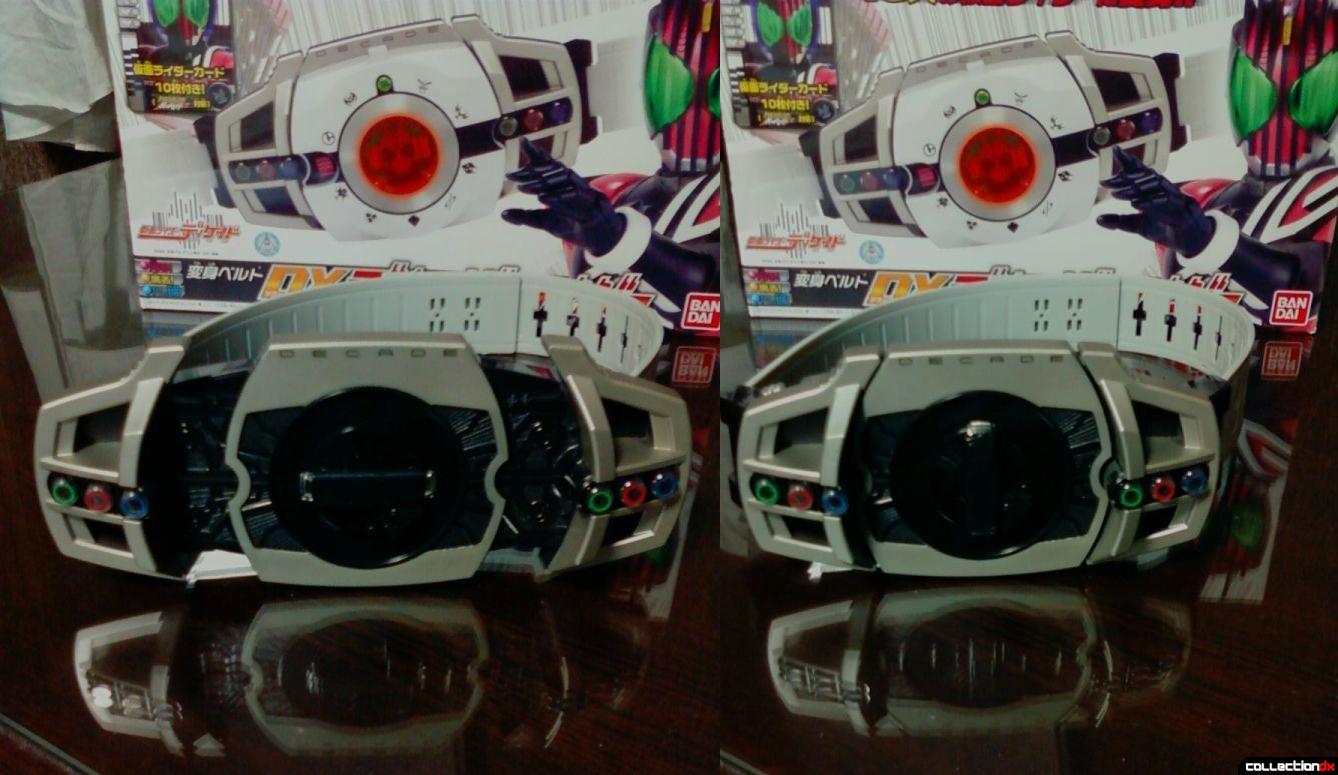 To activate the belt’s functions, you “open” the buckle, insert any of the included cards, and “close” the buckle. Every action you do is accompanied by light and sound actions, which mimic the show’s belt. The card you insert also affects the sounds the belt makes. Also, the light effects are minimal compared to other Kamen Rider Henshin toys (2 red LED inside the sealed buckle provide the entire light show), but there are a lot of sound effects. Hearing it all in action - from opening the buckle, inserting a card and letting the card idle a bit/removing acard, and closing the buckle – is very satisfying. 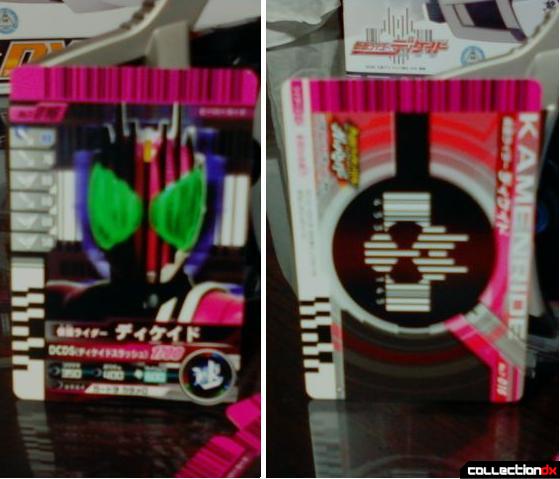 On the show, Decade uses many different cards and their functions range from transformation to performing signature attacks. This is where the merchandising genius at marketing HQ becomes apparent – your initial purchase yields you 10 transformation (Kamen Ride) cards, which the protagonist uses to transform into Decade and any of the previous 9 Riders. However, there are also special attack and weapon (Attack Ride) cards, cards which allow Decade to assume all but the ultimate form of any rider 9 previous Riders (Form Ride), cards which unlocks forms to past Riders (Final Form Ride), and cards for signature/finishing moves (Final Attack Ride). These other cards are packaged with different toys or bought off of vending machines. To further add to the collecting incentive, all cards function with the “Kamen Rider Ganbaride” arcade game. Conversely, all cards used for “Ganbaride” can be used with the Decadriver as well. The Decadriver cannot read all cards, but will play generic sounds with any “Ganbaride” card it does not recognize. Also, the Decadriver will give an error buzzer when a non-“Ganbaride” card is inserted.

The Decadriver is an awesome toy. As a role-playing item, it represents its on-screen counterpart very well. In terms of scale, the buckle is very close to the prop’s size while the protagonist is in his civilian form. Once transformed into Decade, the show’s buckle becomes noticeably larger and the clear window takes on a red hue.

There are a few details that bother me, though. Unlike the show, the toy does not announce any of the special attacks or form changes. Instead, the belt replaces the name of the attack or form with the name of the rider that uses it. Using Attack Ride – Slash, for example, the belt says “Attack Ride…Decade!” while it says “Attack Ride…Slash!” on the show. Because of that, all Attack Ride cards used by the same rider make the same sound. The same applies to Form Ride cards as well - using Form Ride – Faiz Axel, gives you Form Ride – Faiz. Also, if you intend to collect all the cards, you will be spending a lot of time and money buying additional toys or card.

Awesome toy, makes me want to do some reviews of the popy showa belts I have... anyway, I seem to recall a video on youtube of a guy using custom printed cards he printed off a bbs somewhere (probably 2ch) that could cause all kinds of weird sounds and rider name combos to pop up. It would be cool to get one of these and just make random barcodes just to see what sounds it plays.

Too many cards... O.o; I would have rather that the Belt had ten buttons that activated the Ten Riders (like the four on the Den-O Belt did) rather than keeping track of a bunch of cards.

I mean, what's gonna happen when Decade comes across Blade World??? That was the show that debuted actual playing cards with their Rouser weapons (I'm looking for only Garren's Buckle and Rouser, BTW), and each Rider (four total) has 12 cards... for a total of 48 + 1 Joker.

Good first review, but I still don't want one of these. None of the toys from DCD are really impressing me (nor do most from all KR shows, for that matter)...

From what I could tell from some videos on YouTube, the DecaDriver does recognize Advent cards and Rouzer cards. It just says "Advent card!" or "Rouzer card!" when you insert one, though. By far, the DecaDriver is a lot more impressive than the DienDriver.

Decade actually went to Blade's World after he went to Ryuki's world. safe to say the only rider powers he can access is that of Blade's. Yeah there is a secondary toy that goes there and the buckle is still used

...but the franchise is now literally destroyed, thanks to Decade.

This is all Decade's fault :<

I just finished "Kamen Rider Decade" subbed Ep 6 last night. It usually takes a while for me to acclimate to the style of a Kamen Rider series ("Den-O" being the exception), but I'm finding it difficult to attach to "Decade". Perhaps it's because I haven't seen all of the original nine shows (only "Blade", "Kabuto", "Den-O", and part of "Kiva"), and am missing a lot there, but... changing the lead Rider into a weapon for Decade!? WTH!

You guys sound like Narutaki now as his favourite quotes were:

"It's all your fault, Decade!"
"Because of you, Decade, this franchise (world) is also destroyed"

Though I'd say they should commemorate more than just a DecaDriver. A re-issue of all older DX version (not the Legend ones) Rider Weapons and Belts should be better. That way I can pick up the King Rouzer and the other Blade stuffs I missed out.

As for the other item that goes to the DecaDriver's buckle, it's called the Final Kamen Tanmatsu K-Touch. The K-Touch has an interesting 'touch-screen' system that you can slot in either the Rider Marks card or the numbered cards to activate a different set of sounds. I still fail to realise how they did that. Guess, I should get one to try it out.

I'm planning to get the DX Rider-1 belt while I still have a chance. But...Decade's the reason why I lost faith in the series overall and I don't have plans on watching any future Masked Rider shows. I'm starting to like the previous ones from the first series up to Agito...

Wow, I didn't know I hated that series SO much...

I was a little tempted by this one, but the absence of attack specific sound effects kind of put me off.

Of course that's nowhere near as bad as the DiEnd Driver that actually contains no barcode reader and just cycles the same four sound effects no matter what card you insert. It doesn't even feature the correct sound effects for DiEnd's own henshin. Shame really, if it only had the correct henshin sound effects I would have picked one up when I was in Japan.

i think the toy was done first before the actual show was shown. much like the blade rouser or any other rouser, there was no time to insert that function