The Soul of Chogokin GX-51 Getter Dragon comes from the series "Change!! Getter Robo: The Last Day" aka "Getter Robo Armageddon". We've discussed the story before but basically Getter Dragon is a Mass-Produced Getter Machine. You can read a bit more about the background of this robot here.

This toy continues the trend of a smaller, more articulate SOC as set forth with the GX-45 Mazinger Z. These new SOC have a common joint system allowing for extreme articulation previously unheard of in a Soul of Chogokin toy.

So lets get right down to it, shall we?

The box is nothing special, thin cardboard with an assortment of clear plastic and styrofoam trays inside. When you pick up the box you are surprised at just how heavy it is. 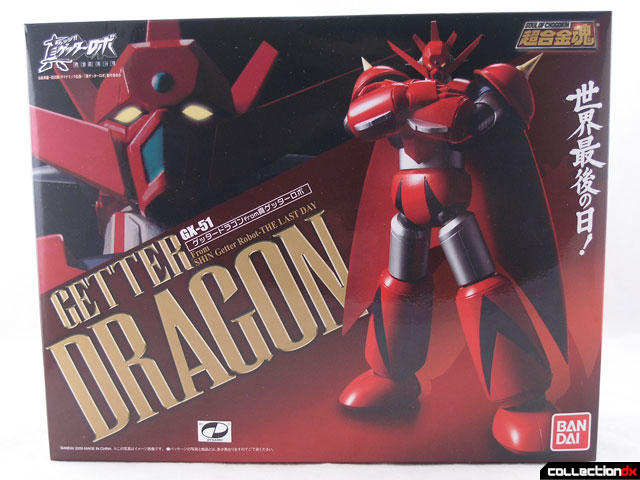 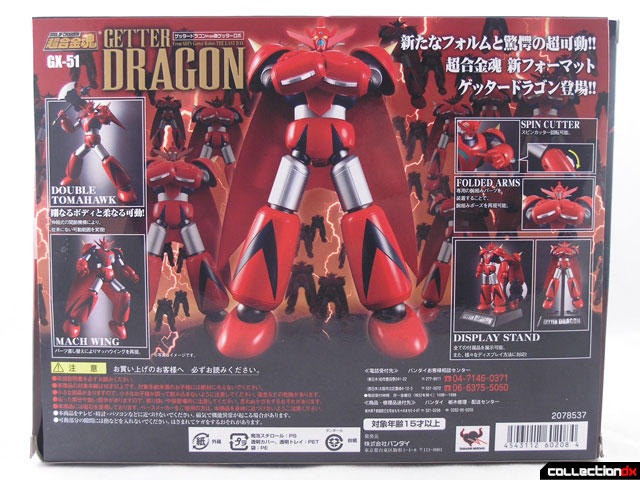 Getter Dragon sleeps peacefully inside of a styrofoam tray. Despite its environmental unfriendliness, styrofoam still seems the best way to protect your gokin from damage.

The toy is heavy, simple, and loaded with metal. It's a refreshing break after the super-complicated Dygyengar set. This is a toy you can actually keep on your desk and pick up and play with without it being a huge project. 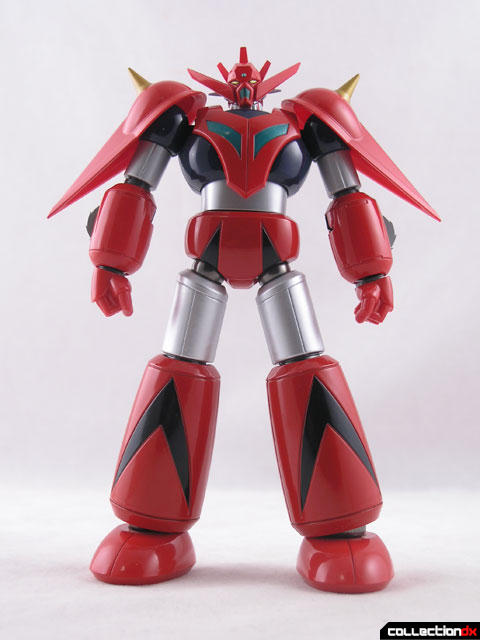 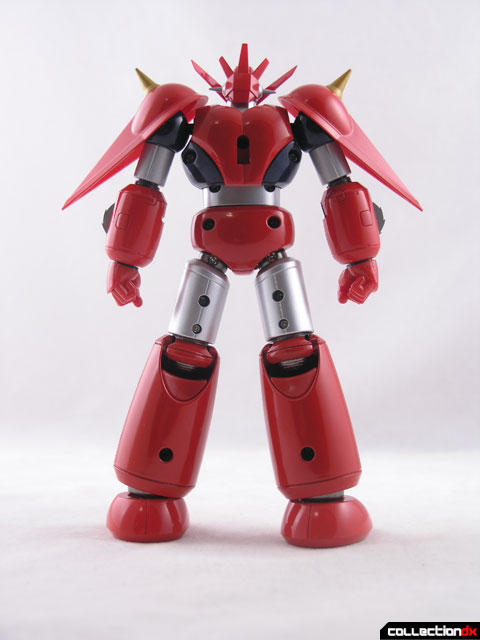 Metal content is ample - with the shoulders, chest, torso, waist, legs and feet being metal. The thick lower legs really add some heft to it. 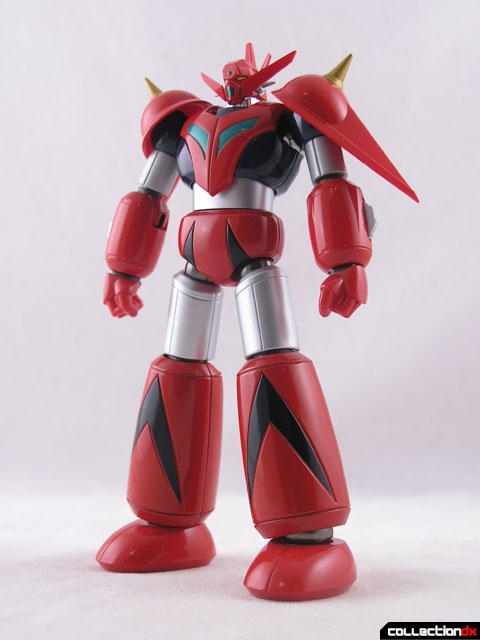 Articulation is essentially the same as the GX-45 - standard ball and hinge shoulders, hinged elbows, double jointed neck, chest and waist joint and swivel wrists. The lower part of the body features the new added articulation such as extendable hips, collapsible panels on the legs and extendable ankles. All of these advancements allow for greater articulation without sacrificing on looks. 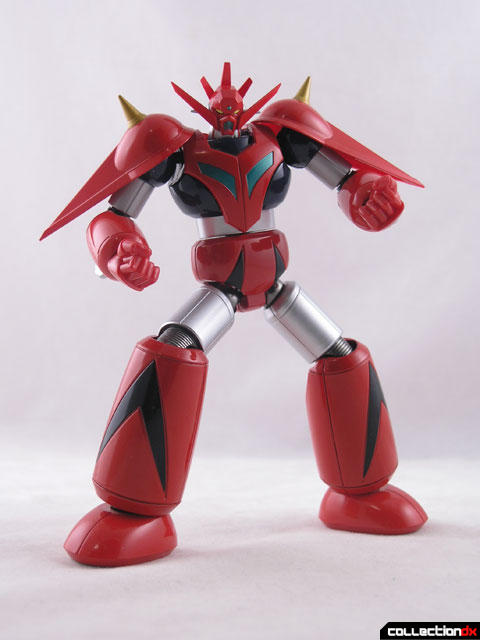 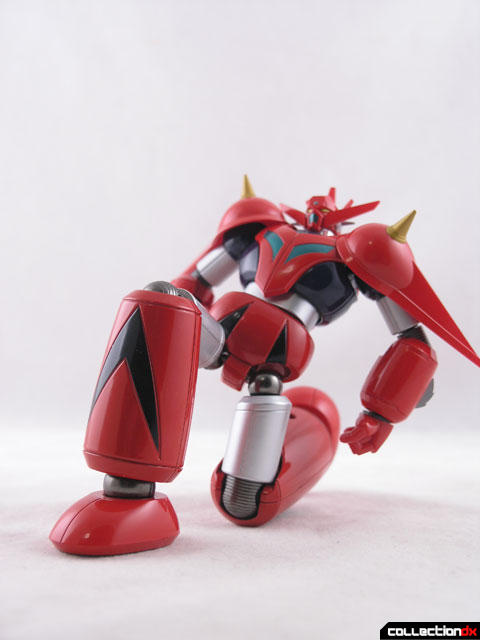 Getter Dragon comes with a few accessories but nothing extravagant. First off are the folded arms. This is a one-piece plastic assembly that attaches to the upper arms via magnets. He looks imposing and judgmental when they are attached. 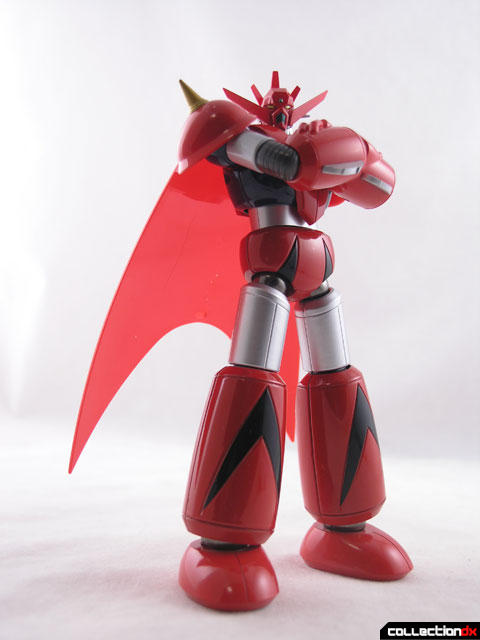 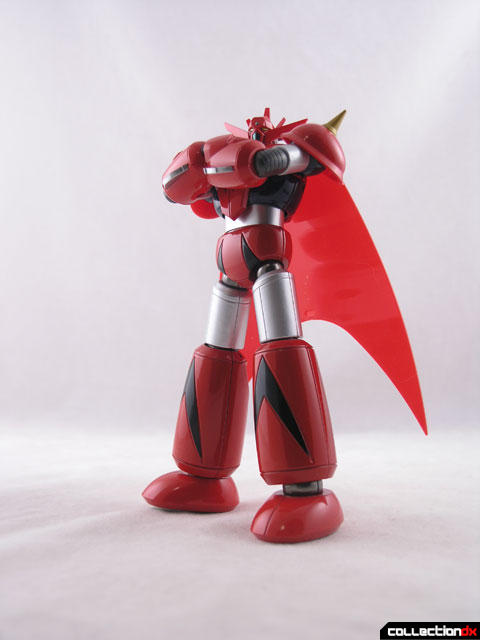 The regular arms feature spinning saw blades, but an instruction sheet warns that the blades will not turn when the arms are bent all the way. Three sets of hands are included. 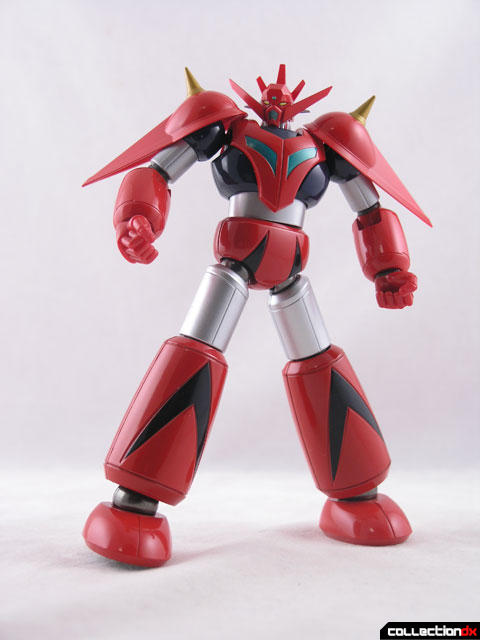 On each shoulder there rests an articulated shoulder armor, attached to a ball joint. These can be removed and a small extender piece can be added to increase the range of motion of the pads. I'm not entirely sure of the purpose of these, as it looks better without them. 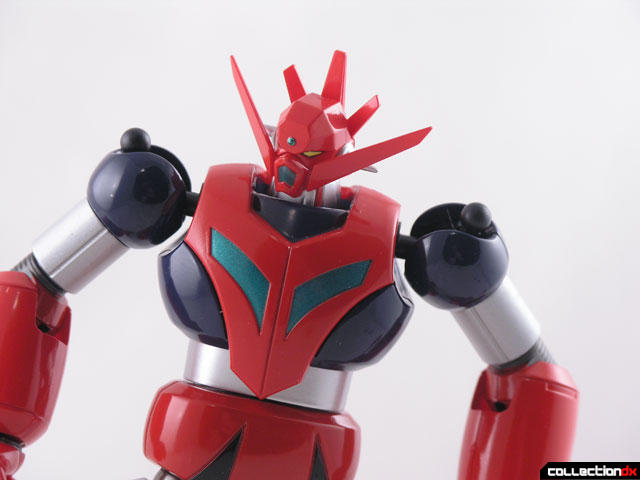 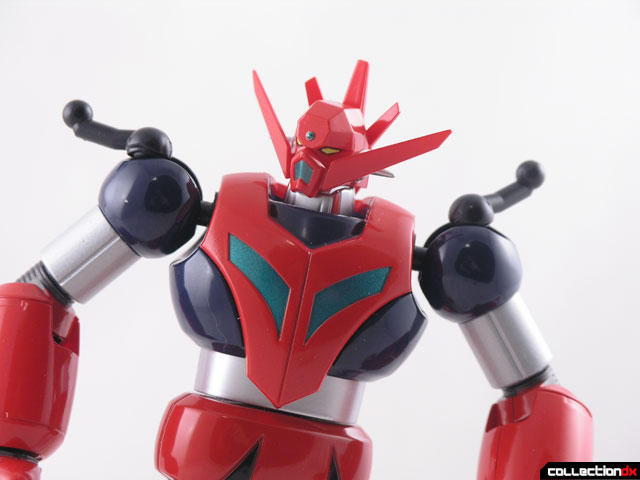 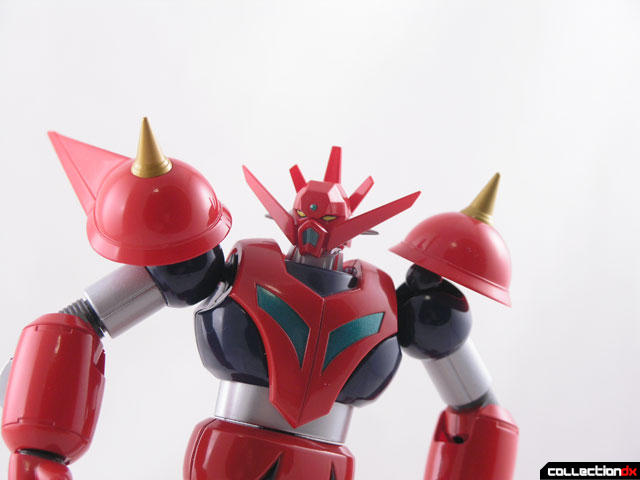 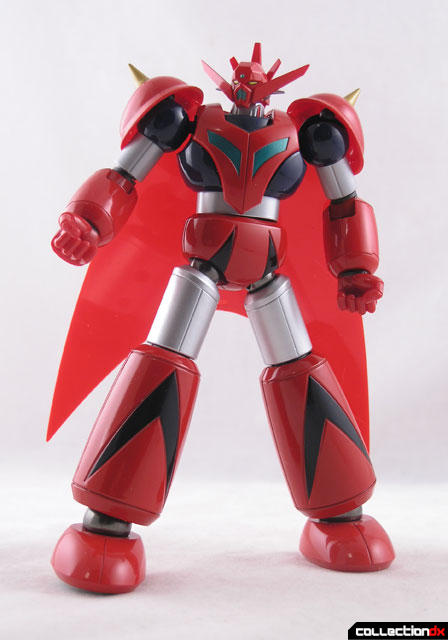 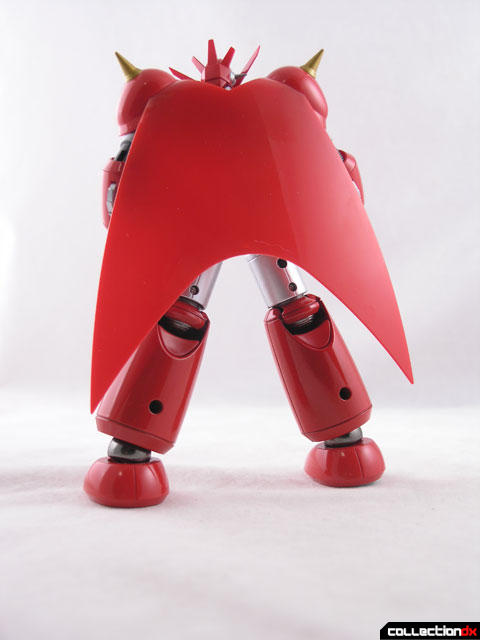 Getter Dragun comes with his signature Double Getter Tomahawks which are really really sharp. Be careful when trying to get the handle of the Double Tomahawk into the optional hands. 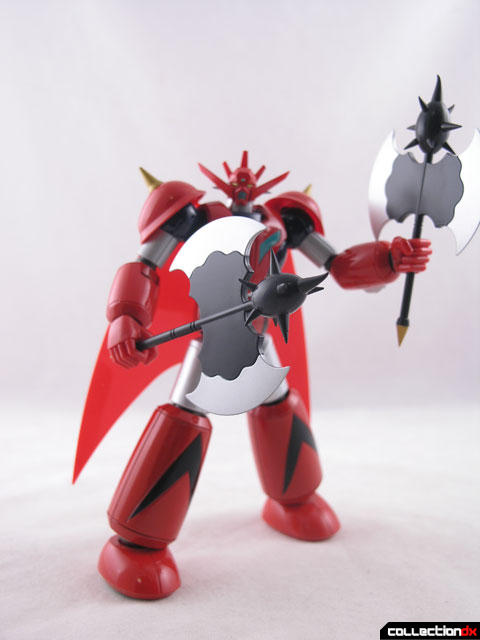 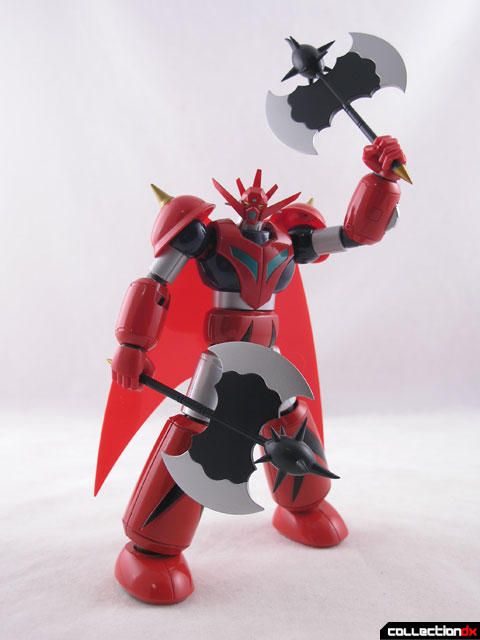 A display stand is included that has places for all of the accessories. The stand is re-configurable to accommodate different display modes and storage of accessories. 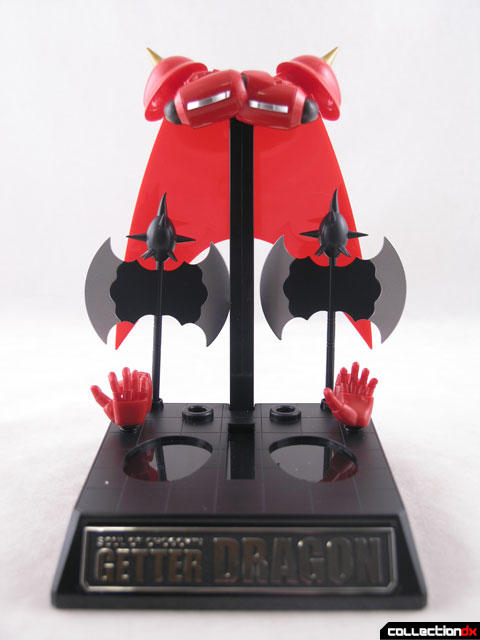 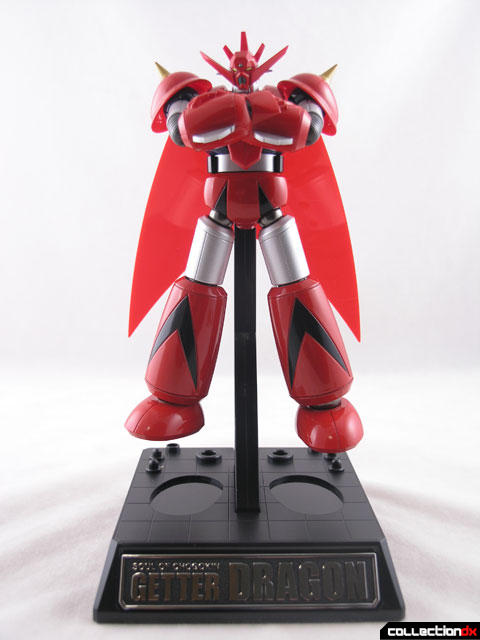 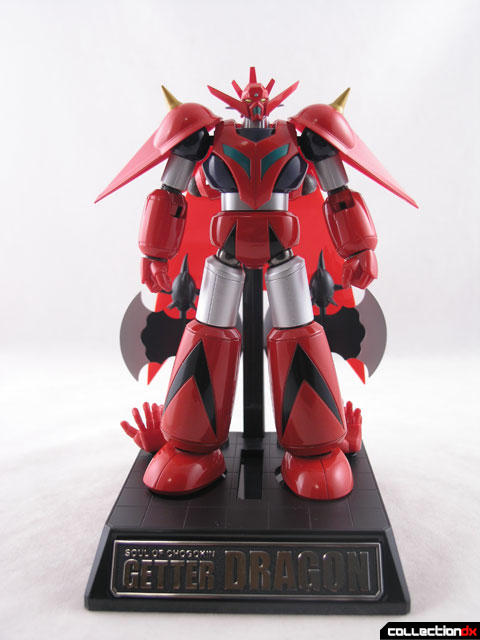 Getter Dragon is an excellent example of why the Soul of Chogokin line continues to be as popular as it is. It's solid, heavy, and fun to mess around with - not to mention great looking. 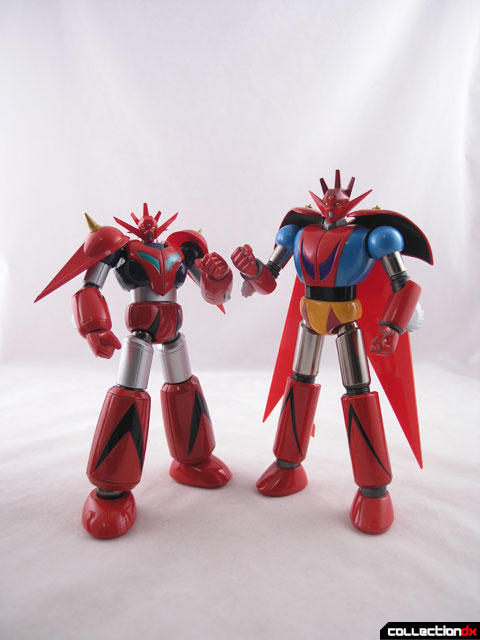 You can get your Soul of Chogokin GX-51 Getter Dragon at HobbyLink Japan.

19 comments posted
I just wish this level of

I just wish this level of articulation had been applied to the classic getter dragon, whose colors and design I prefer.

Most probably we will have a GX-18R GETTER DRAGUN, 30th Anniversary or some similar nomenclature. Compared to GX-51 the classic Getter Dragun looks so thin!

Great review Josh! I like the articulation this figure has, and you present very well. Although, I still am glad I passed on it and grabbed the SOC Big O instead of this New Getter. You really cant top the original Dragon release IMHO.
-Dan
CollectionDX LLC
Vice President/Co-Owner

For once you're wrong, shogundan. I was very reluctant whether to buy this Getter or not. Eventually I decided to buy it, thinking all the time that I was wasting money. When it arrived from HobbyLink Japan and I paid through the nose for the VAT and customs clearance here in Malta, I felt so happy with it I really didn't mind all the money I had spent. It is really worth it and believe me it is darn heavy. So what are you waiting for? Go get one now! You won't be disappointed.

great review...but upon watching the video...not crazy about getter wing and shoulder assembly...looks cheap and flimsy...and might actually pass on this one.

Also, I believe from video this was the getter G that Dr. Satome...who was evil and the villain but at the end good??? (watched movie 4 times, did not hate but makes like zero sense)..combine into from the insides of shin dragon (scene is shin getter fight these funky looking getter robo G that keep reforming from pieces of shin dragon's insides)...who like him causes the world to fall but later saves the world from the aliens...??? go figure

A nice simple review that's to the point. Much more excited to get my Getta now... I ordered him from BBTS should be anyday now I hope. "Getter Robo Armageddon" is a god awful anime, but the Getta design is so great! I love the folded arms features he will be so cool on display. Nice pic with the two getta next to each other.

I see the video but will wait to watch it... because I wanna be surprised like a kid on Christmas morning to open this thing and explore the toy and packaging on my own. You know that thrill of opening the new toy, yup!

The only grumble with this diecast is the lack of common sense. Why didn't Bandai manufacture the Tomahawks in two separate parts, namely the axe head and the handle to go through the fist as MAX Factory did with their Mazinkaiser? I simply decided NOT to use the Tomahawks.

I've noticed a lot of folks saying "articulate", when they mean "articulated"!

As with all SOC (I still have burn marks from being obtuse enough to buy some for no longer sold prices...only to see a new version or a re-release...argggh)...I will now be wise and practice extreme patience before I buy anything..because they flood the market, and re-release until the cows come proverbially home (got Raideen and Damios on clearance ...so It is on my list to buy...how ever the size thing clicks it down on my list...very disappointed it is so small in comparison to the gx-18. I found gx-18 articulation amicable and it fostered no diatribe in my description of its place in my somewhat superfluous collection.

Seeing the two SoC Getter Dragons next to each other is real neat. The early Getter Dragon was heroic, and it's toy is tall, bright and colorful. The Armageddon Getter Dragon was a tool of the villains, and it's stocky, darker, and more fearsome. It's seems similar to comparing a masked luchador with 90s WWF.

The original does seem very skinny by comparison, but I can't help but think the new model would look that much nicer with the original height. I'd like to see a design with the newer muscle and general proportions of the old.

The real reason why those shoulder extenders are there is to give the "wings" a great deal more flexibility in posing them. Place them on the small pegs directly and try doing those wing poses... you'll see why.

It is the best SOC I've posed and handled so far. Not much to complain here. I still have fond memories of my old-school Shogun Warriors one with the launching fists.

Good to know. I am still eagerly awaiting my pre-order's arrival.

Just watched the video your posted for Soul of Chogokin GX-51. Very nice, it's like a what to do and not do when you get this toy. Awesome! I busted the hatchet on my Soul of Chogokin: GE-10 Gaiking, by accident. I think watching your video before the toy arrives will help a lot, so I don't bust him up by accident. Thanks. This guy still hasn't arrived from BBTS (sigh)

Hey Josh, I thought you said the feet were diecast? Mine are PLASTIC. I still like the chogokin, but I read this review and then got the plastic GX-49 Mazinger treatment here! Why can't Bandai just stick with the original S.O.C. formula and keep these goddamn feet diecast??? Granted the lower legs are metal.
This has a nice finish unlike the GX-20 Poseidon that I commented on in that review. Double check yours for the bubble issues I had.

I'm a big Getter Robo fan, of the toys and some of the series (not Armageddon)and I think this is awesome. But now I'm torn; do I get this, or the Getter One SOC? Anyone have any comparisons of quality/metal content/play value?

Well I can tell you that GX-18 has die cast feet unlike this one. I think the GX-18 is superior in the construction dept. and I love the retro blue metallic finish used. It is VERY COOL when you do mash-up forms with the addition of GX-19 & 20. Gx-18 is going up in value and is more popular. I vote Getter S.O.C. GX-18!
I have a REAL problem with Bandai's recent use of plastic feet on their S.O.C.'s
Grandzinga....

If I had to pick a favorite on looks alone, when it comes to the SOC line, Getter Dragon is a really close #1 for me.

The color is gorgeous when seen in person. That red is so cherry, it blew me away.
I love the menacing folded arms and wish that more of these toys had gimmicks like this (gimme more LED lit guns, shooting fists, firing missles!)

The size being slightly smaller didn't bug me much. I imagine the mass produced machine would not be the same size as the rest of them. It also didn't break the bank for me on price.

The cape is the only thing that I dislike. As sharp as it looks, it was a real pain in the butt for me to get it to stay. I was looking at it and thinking that there had to have been a better way to make this.
Also, I would have liked just one other weapon. Preferably one that has the ability to launch something at my cat.

Great review. It got me to buy this toy and I'm very happy.