The Space Battleship Yamato craze of the late 70's spawned alot of very interesting toys. Aoshima's 1976 release of Gattai Kyokan Yamato has to be one of the most unusual I've ever encountered. Recently, Aoshima's website, Hobby World Japan, sent me a re-issue of the 1976 release to review. Before I get to the review I would quickly like to explain a few things. "Gattai" is the Japanese word for "Combine" and "Kyokan" means "Giant Ship." Hence the name Gattai Kyokan Yamato. Basically in English would translate to Combining Giant Ship Yamato.

Aoshima's Gattai Kyokan Yamato is composed of four smaller vehicles that combine into one Space Battleship Yamato-esque like battleship with a Super robot called Gattai Robot Musashi, in place of a bridge tower. All of these four vehicles has its own name and purpose.

To start off with, the box is freaking huge! Measuring in at 21" x 13" x 4". The box being this large is always a good sign that the end product will be big. Besides being a large box, it is also very well illustrated and is almost a near duplicate to the original 1976 release. 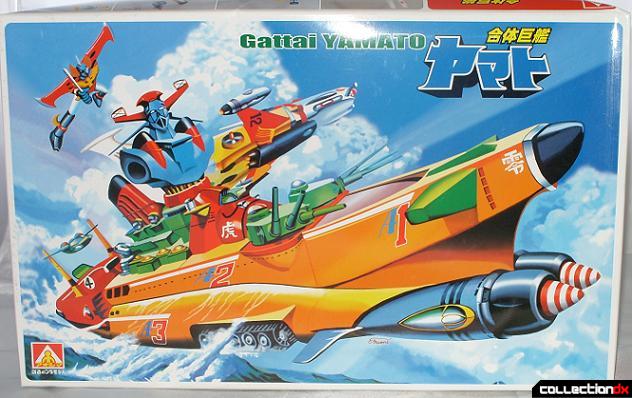 Upon opening the box I found several different colors were used in molding the different plastic parts (red, orange, green, black, light blue, white). Nothing is pre-painted, however, I like the funkiness and toy like qualities of the molded colors. With this in mind, I decided to build this model with limited paint detail so it would give the finished product more playability and make it less likely that I would be afraid to handle upon completion. Taking this course also allowed a novice builder, like myself, ease in the building process.

As you can see in the picture below, the 18" Aoshima Yamato dwarfs the 16" Taito Yamato. 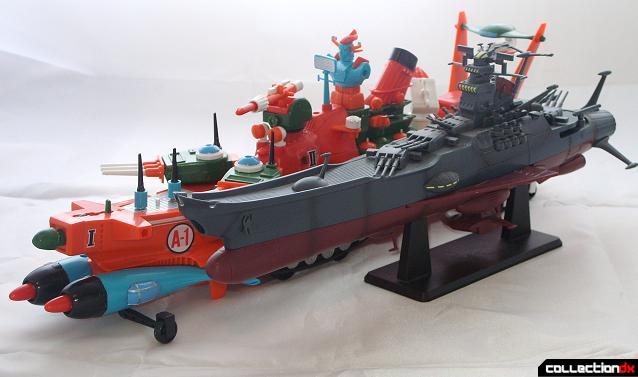 Moving along through the pictures below, please take note: Not only is this toy loaded with turrets and such, this model/toy has actual firing gimmicks! Not just the Gattai separation gimmick. I mean take your eye out rocket launcher goodness! 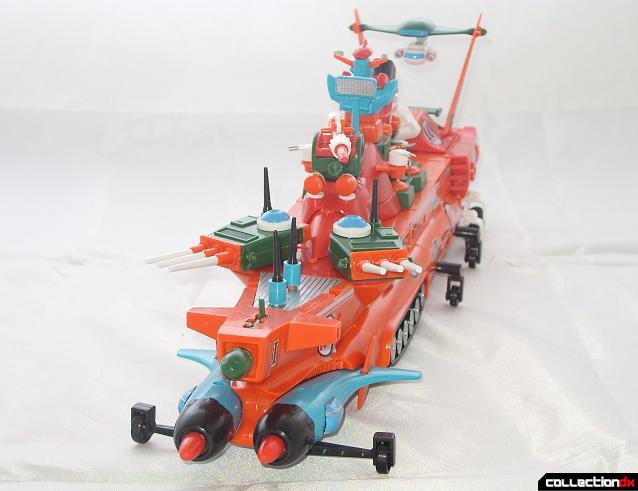 In this next photo I will point out all the things that launch off this monstrosity. Starting at the bow, the green tip of the bow launches. Midway back above the roman numeral II you will see our second eye impaler. A little further back right behind the smoke stack you will see the white harpoon type gun. Oh, and I am not done! between the rear wings is a launching escape pod! 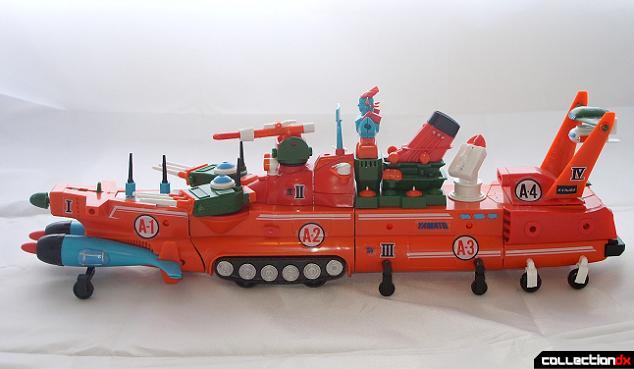 Check out the stern, It almost looks like car taillights and a bumper! Funky huh? Plus, check out all the wheels and tank treads. Even more Funk-a-delic! 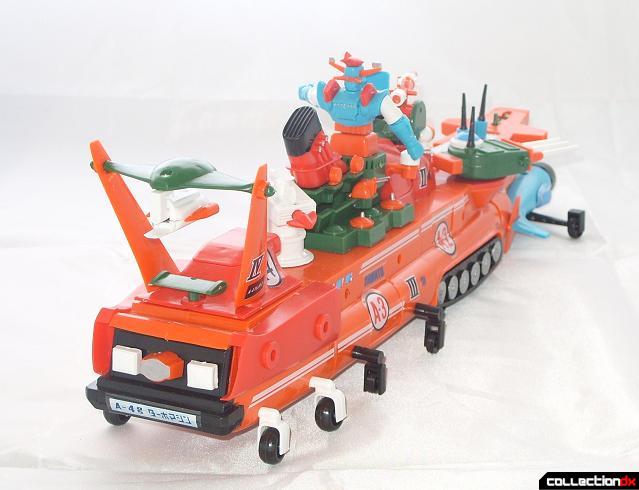 Here is a good view of the bridge which doubles as the Super Robot Gattai Musashi. Shown below are pictures of Robot Musashi combined into it's robot form. 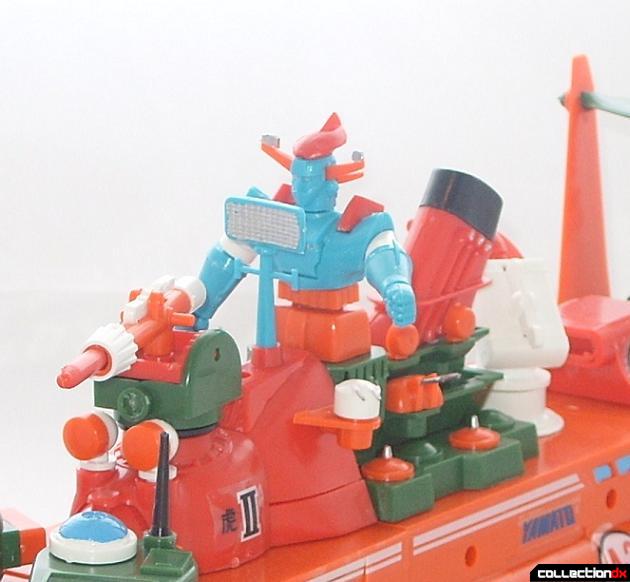 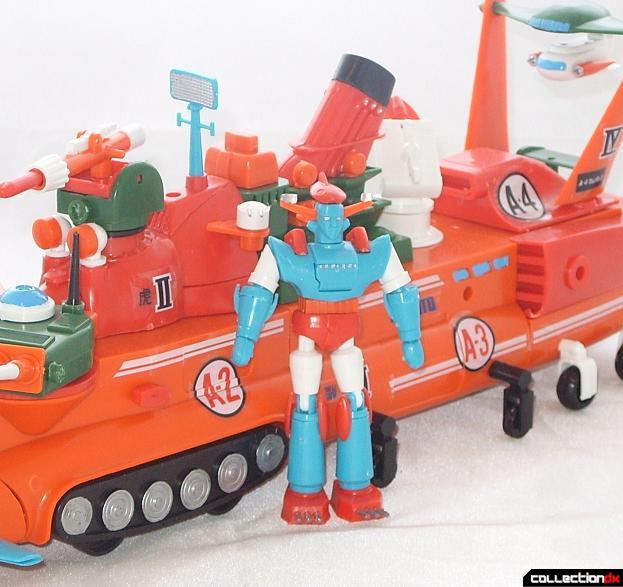 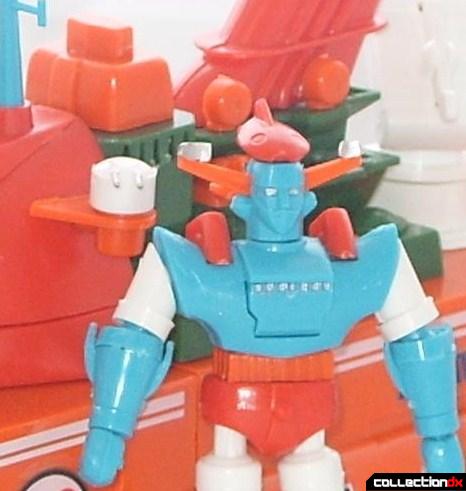 Now lets check out the ship separated into its 4 individual components. Starting from the stern, working our way forward to the bow.

As you can see below the stern has sort of a Formula One motif. This part is aptly named A4 Turbo Machine. You can see the turrets that become Robot Musashi's feet mounted on the front car like portion. You will also get a better view of the launching escape pod above the giant hood scoop, between the rear wings. take note that Robot Musashi's legs just hang off each side when in this mode. I know that's kinda lame but, it really adds to the charm of this toy. The next vehicle forward is A3 Bridge Machine. You can see how Musashi Robot's torso and head are used as the command bridge. You will also see the harpoon type gun I had mentioned earlier. Moving along we come to my favorite piece, A2 Tiger Machine. I love this part, there is something about the tank treads and turrets that I love! Again, you will notice the red tipped launching missile and the arms that protrude from the front of it for no apparent reason. Lastly, we have the very unusual A1 Zero Sen Machine. Now this to me is the strangest piece of the puzzle. Look at the WWII style Zero airplanes that are molded into the bow. They don't mention this in the directions, but you can take those off and make 2 planes from the included parts. Overall, I would say that Aoshima makes a very fun kit/toy, along with being relatively easy to build. Even though for the most part it's easy, it still can be challenging at sometimes. Taking your time, Using patience, some quality glue and a X-acto knife will definitively make the build go easier!

What an awesome kids toy!

What's with the photographs? Each one is either shaded pink or teal.

That complaint aside, the toy looks truly funkadelic. I love all the little holes on the side of the ship you can use to assemble the parts in unusual ways.

I apologize for the photos, my white balance was way off, I've since resolved the problem.

A Model kit? I'm in heaven! So much funk, I love it. How much do these sell for?

It's 3,840 yen at the moment. They also have different kit for the same price that looks just as bizarre.

Model kits really aren't my thing, but I am tempted...

This is one of those kits I would build right out of the box, too many cool gimmicks!

Sometimes that is the problem with building some of these old kits, should one build them with all the gimmicks or should a modeler upgrade and make it what it should have been. I mostly have these problems with the kits that came out of the 60's and 70's but this kit screams build me out of the box.

Super cool review! Thanks for turning me on to this kit, I will keep my eyes open for this one.

If there is a kit I would suggest to build straight-from the-box and not to bother about painting, then this is the one! Never take a toy like this 'monstrosity' seriously. And another thing, don't even bother to 'upgrage' this toy. Upgrade to what?! To a non-scale bright orange Space Battleship Yamato?! This toy looks more like a carnival float or a parody of Yamato but all in all it looks like a very cool toy kit to kill time during cold winter evenings.

Hey Leonardo,
If you liked this kit you will definitely dig my next review of Aoshima's Gattai Tiger Shark. It's another way to funky to build realistic kit.

I was checking out the other kits in the series but I missed the Tiger Shark! Wow, I dig on that one even more! That entire series is wild, very cool!

Many of the kits from the 60's and 70's, in both the US and Japan, were toy model kits. The kids can build them but have some play value with the kit after they are through. While these are obvious in their toy form when one is through, its those 60's & 70's Thunderbirds, Mazinger, Ultraman and Kaiju kits with their wind up engines, shooting missiles, cardboard cutouts and bonus figures. They are close to being straight model kit of the subject if it wasn't some huge wind up engine or some funky gimmick. I'm building a 70's Bandai Brain Condor where the shape is great but it has a huge plastic block underneath it for where the wind up engine was suppose to be put. I opted to chop the block off and reshape it but I'm keeping the shooting missiles.

This isn't strictly speaking a 'model' kit. It's more of a toy kit.

It's cool and freaky looking all at the same time.

I freaking love this. Here's WAY more info on this series: http://www.starblazers.com/html.php?page_id=209

I never heard about Atlanger... Anybody have any info about it?

Never seen the show, but the robot is a very popular knockoff choice among junior machinders. Looks like it's got some serious FUNK to offer though! This thing is fantastic! Great review, Dan!

Atoranger doesn't have a show. It's basically an Aoshima created Mazinger knockoff. Atoranger does show up in the Playstation game "70's Robot Anime Geppy-X" which a shoot 'em up where the playable characters are based on Super Robots. The titular Geppy-X is the Getter Robo type.

This thing is pretty awesome. I love how it seperates into several different.....um....pieces of a ship?

I miss when toys were toys. I mean,can you imagine if you got say,the Batmobile from Dark Knight and it was bright orange? Or if you got the new Enterprise and the ass end seperated and became a formula F-1 car and the front became half a robot? It would never happen,due to the market catering more to collectors than kids.

The times where toys are mend to be fun, not depend on it's hyper articulation, metal parts and ultra detail...