So the first Destroid by Yamato was very cool, and this one, the Defender, really is just about perfect. 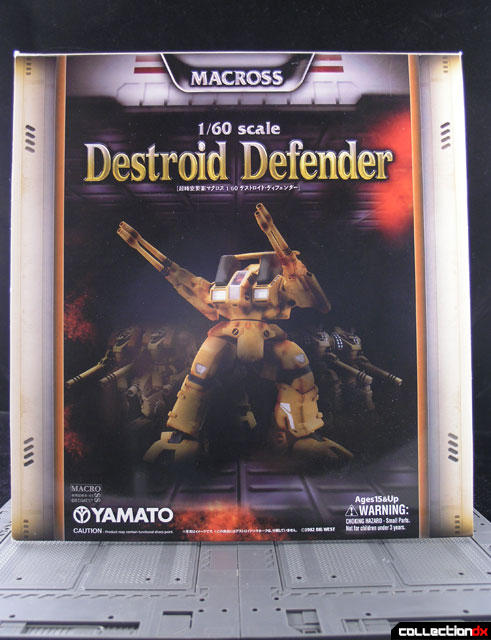 The Destroids are the ground based mecha that appear in the Macross TV series (Robotech to some). They don't fly but they have amazing firepower. In a sense, they are just mobile artillery platforms.

The ADR-04-Mk.X Destroid Defender (AKA Eardrum Buster) is an anti-aircraft defense robot. It's only weaponry is the dual 78mm automatic cannons on each side. Ammunition is stored in the large grey magazines on either shoulder. 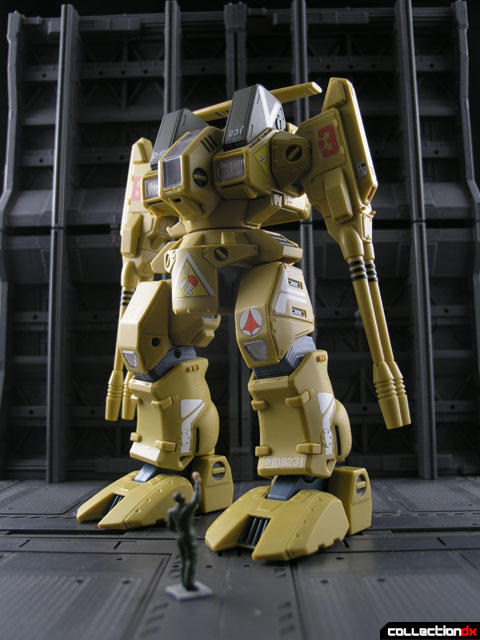 The Yamato Destroid Defender is really a fantastic toy, with the only drawback being the price. At about 9,800 yen (about $100 USD) this makes a huge dent in your paypal account, but it really is the Destroid you wish they made in 1985. 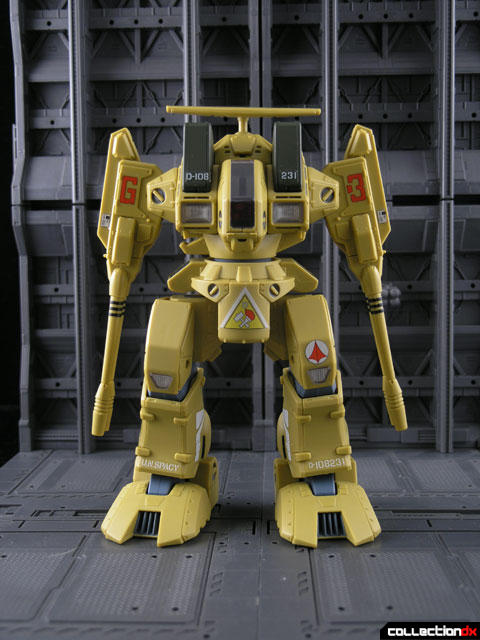 Standing 18cm tall, the 1/60 scale Destroid is in scale with the other current Macross releases from Yamato, and I have to say, it is very cool to have them all in the same scale. The included support crew are great and can be used with any 1/60 scale Macross product. 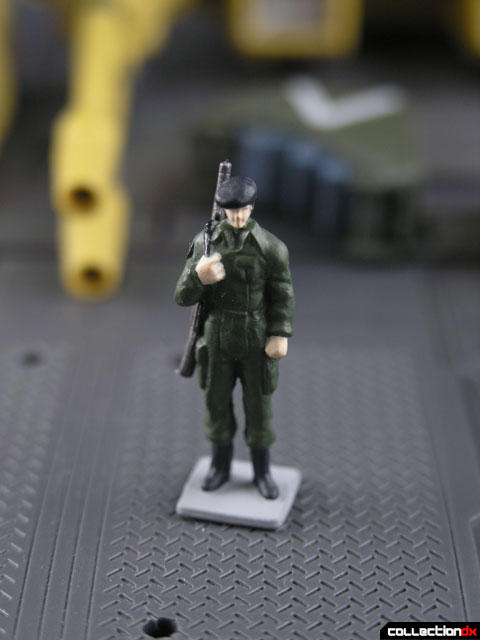 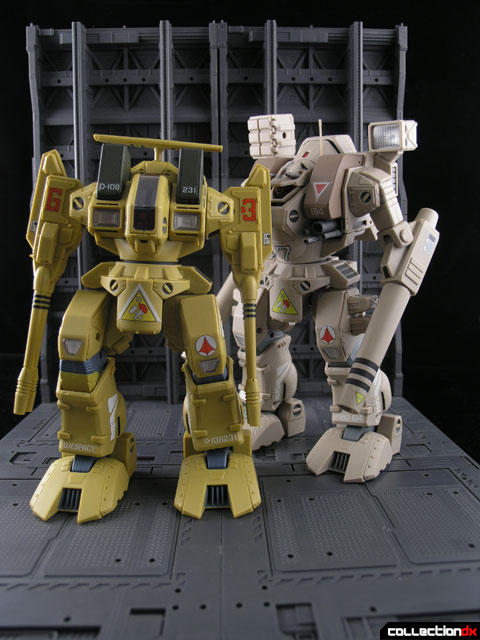 From the top, the Destroid Defender features a few gimmicks and moveable parts, most of them on the top half. 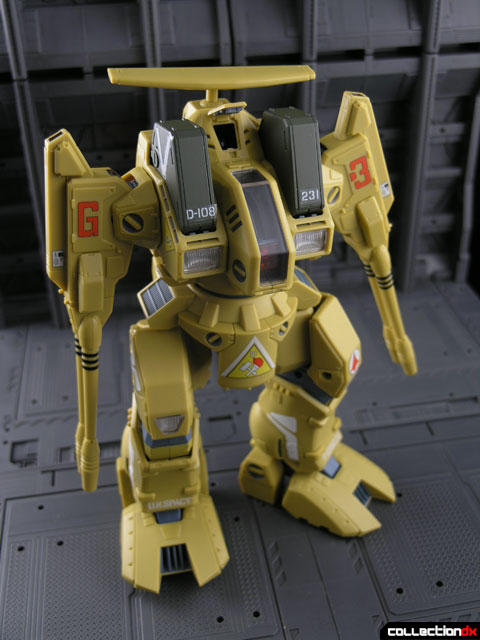 The radar on the top can turn 360 degrees. 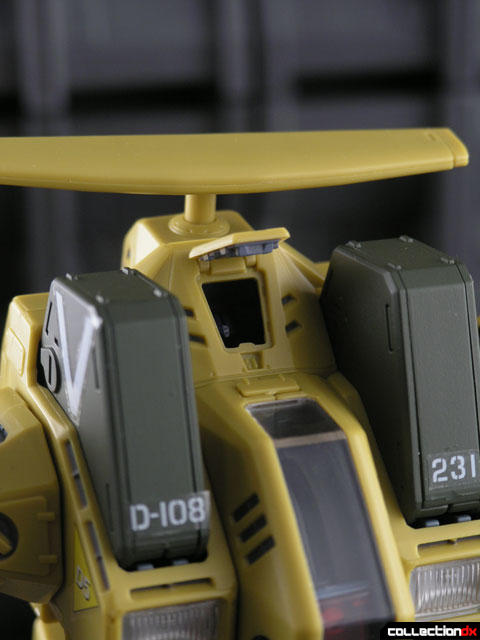 The cockpit door can be opened to see the inside, but you must remove the entire cockpit cover to add the pilot figure. 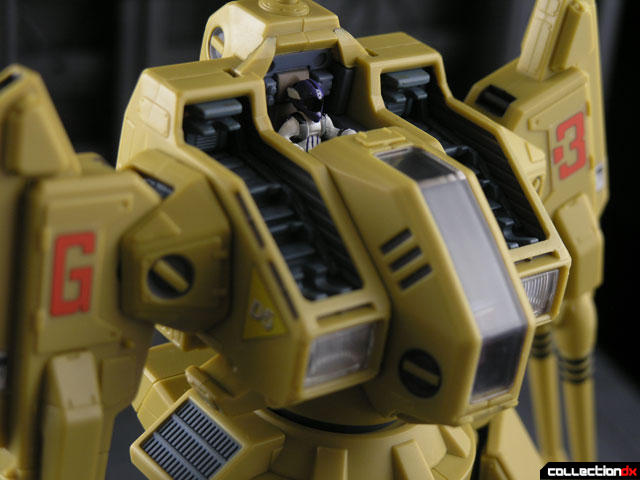 The magazines on either shoulder are removable and feature nice detail on the underside. Included is a second set of longer ammunition magazines that you can swap out. 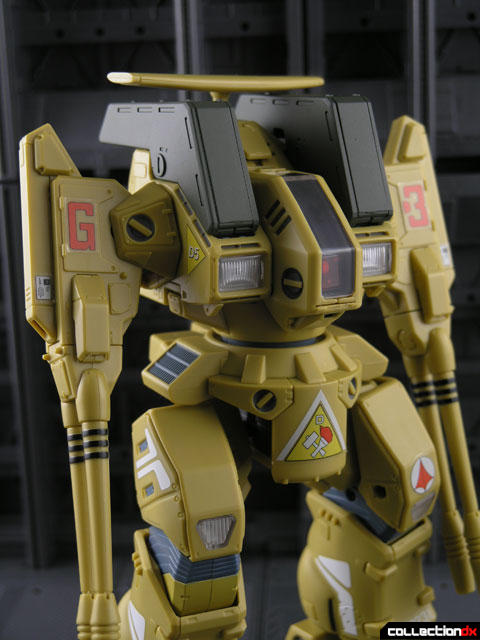 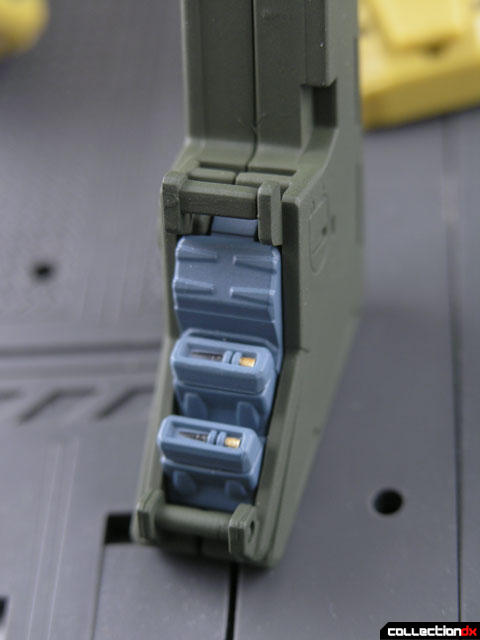 The front of the mecha features a moveable targeting scope, but to move it you must remove part of the top section. To do this, you need to release two clamps under the chest and then slide the top section backwards. this reveals a mechanism to move the scope up and down. I'm surprised Yamato went this route, as opposed to making some kind of external lever or dial. What would have been really cool is if the scope went up and down as you turned it at the waist. 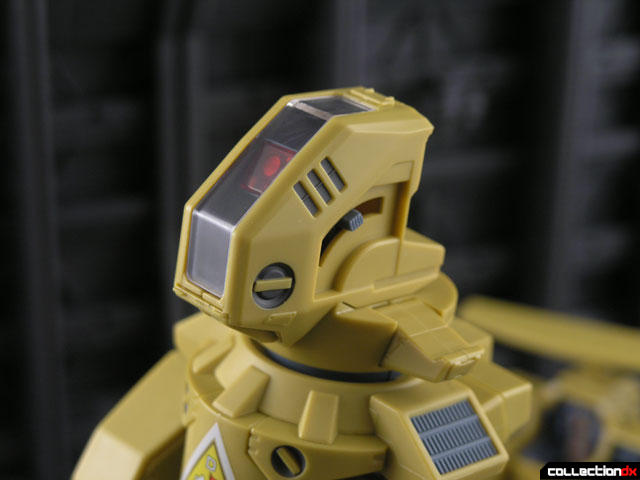 The cannons on the side can rotate in almost any position due to a dual jointed shoulder. You have your basic swivel joint at the body, and then another where the assembly meets the cannon. Note that you can pull the cannon out until you hear a click to get a wider range of motion. 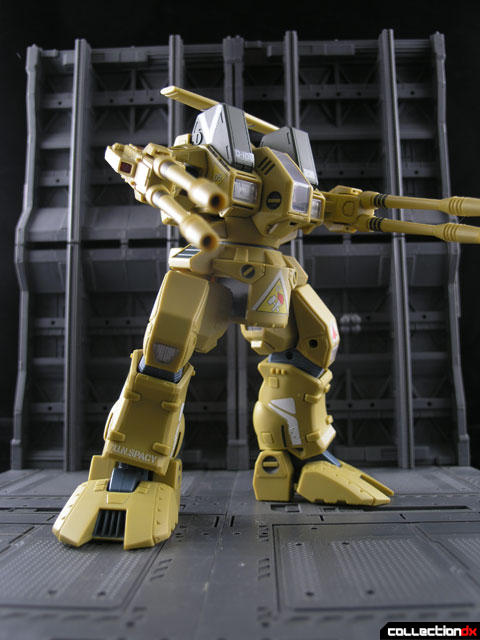 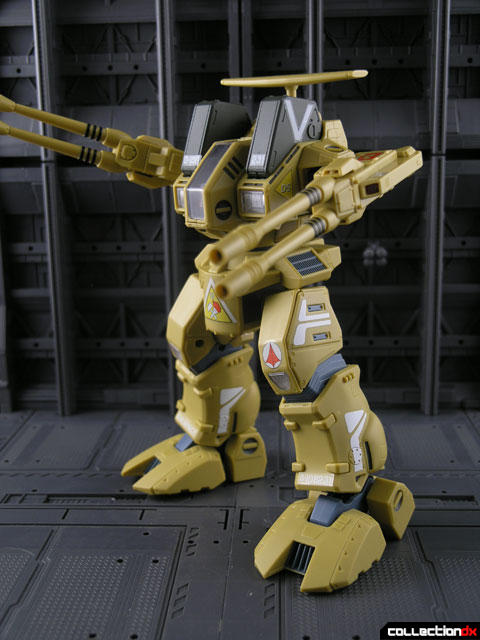 Like the Tomahawk, you can separate the halves of the Destroid by rotating it 90 degrees and pulling it apart. One improvement over the Tomahawk though is that there is no pivot joint at the waist so it does not arch backwards. 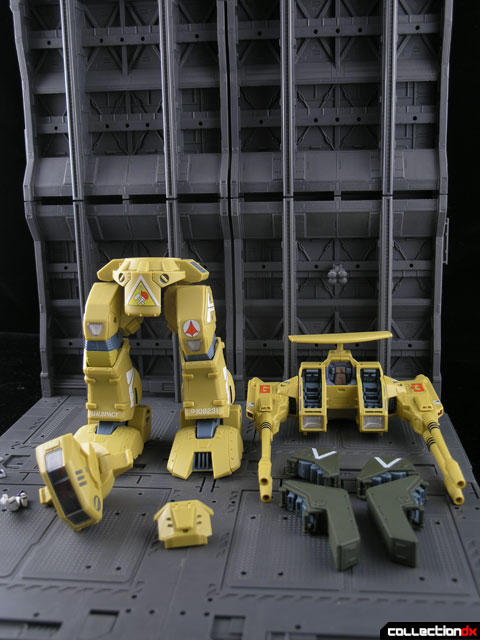 From the waist down it is essentially the same toy as the tomahawk, minus some surface detail. Articulation is still great and the joints are very tight. There is some diecast metal in the ankle joints, but that's about it for this figure. 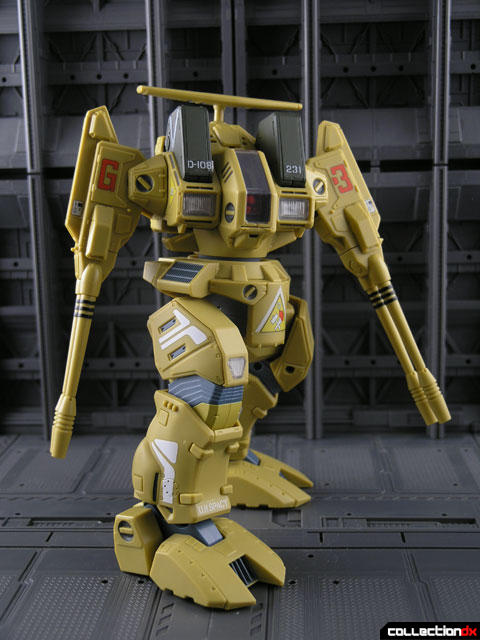 Included is an instruction sheet and a decal sheet. The neat thing about the decals is that they provide different decals for each ship that the Destroid could belong to. (Prometheus or Daedalus)

In all its a great figure, and it cements my decision to get one of each type that Yamato puts out. If you are a Macross fan, you are probably used to spending the money, so this one should be on your list. 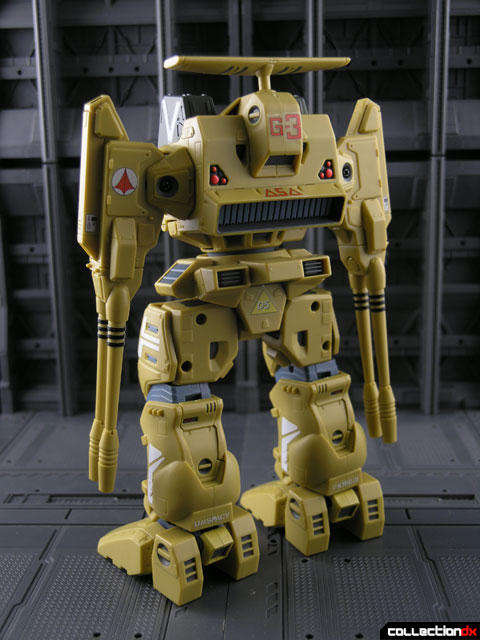 Too expensive for you? Well, you'd better get another hobby, because that's not going to change anytime soon.

So far the Destroids are looking great! What parts are exactly diecast? It doesn't seem like it has a lot. Probably the waist area? Hopefully they make the Spartan.

The Phalanx will be next, since it's the third and last one that uses the leg base. Not to mention the various recolors for these.

A Spartan would be nice, and so far Yamato is proving they are willing to go farther in this scale, but the Spartan is a complete new sculpt that has no variations and uses no parts with anything else. Tooling up a toy that could see maybe 2-3 color variants and is still fairly obscure will be the test of how far Yamato will go. I'd love to get one and it is the only Destroid piloted by a main character (however briefly) so it's possible.

Diecast content on the Destroids is confined to the joints in order to preserve the finish... basically the hip bar and the ankle assembly.

"Too expensive for you? Well, you'd better get another hobby, because that's not going to change anytime soon."

The price is not an issue for my cookie jar. I like the design, but as a toy? It's just that Destroid is BORING to play with. I rather watch it on display than own it. It's great that you can disassemble the toy and pose it but that's all you can do with it. It's still boring. Sorry but I'll have to pass on this one.

I'll save my money for the VB-6 Konig Monster. Now there's a Destroid toy that will keep me busy. It doesn't matter to me if it lacks 100% diecast, it's engineering intrigues me enough to get my money's worth.

Hmm, I don't see it, I mean, It's got tons of articulation, solid construction, modular parts, accessories, decals that you can customize.. how is that boring? It's a lot more than you get from most these days, unless you are comparing to transformers or something.

Macross tends to have a lot of the transforming mecha, so something that doesn't transform might be considered simple. When I first got my hands the Destroid Tomahawk it was a little disappointing, mostly because I like transformable things. While it might be a little unfair to compare it to a MG Gundam as it's made from high quality parts at the end of the day that's really the only difference. As both toys are all about articulation.

Don't get me wrong the Tomahawk & Defender are both lovely pieces; speaking from first-hand knowledge. But some people want articulation & transformation. Even in the real world these guys end up just being cannon folder.

Honestly, that's part of my delay in picking up the Destroids... I'm a customizer, and look forward to painting and weathering them all up, but honestly the Tomahawk is the only one I have a good time taking down from the shelf and messing around with... most of the fun from me will come from the customizing process itself.