Spoilers below if you have not reached the Hades Saga in the Saint Seiya series...

During The Hades Arc: Sanctuary of Saint Seiya, Aquarius Camus along with the 6 other Gold Saints who died earlier in the series are resurrected by Hades to lead an assault on Athena's Sanctuary and take her head. 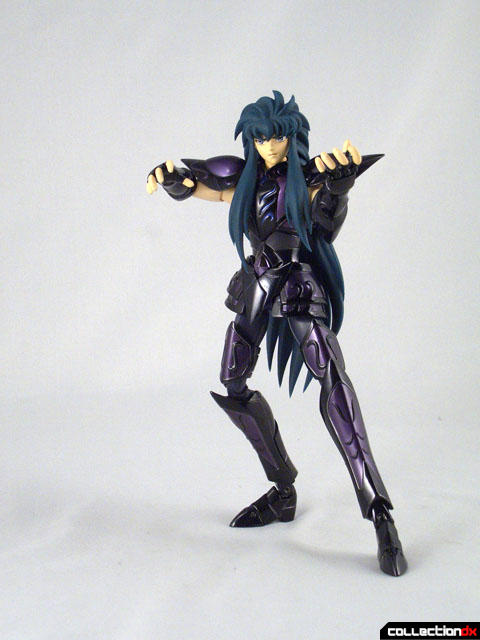 As the Hades saga unfolds Camus along with Capricorn Shura and Gemini Saga fights against Virgo Shaka. During the battle Virgo strips the resurrected Saints of their 5 senses leaving them deaf, blind and unable to speak. They end Shaka's life by performing the forbidden technique, Athena's Exclamation. A sin they repeat once again in the heart of Sanctuary against Aries Mu, Leo Aiolia and Scorpio Milo.

“After fighting against Aries Mu, Leo Aiolia and Scorpio Milo it is revealed that they were attempting to fool Hades in order to warn Athena of his ambitions, as well as grant the goddess her Holy God Cloth and survive the upcoming Holy War.” 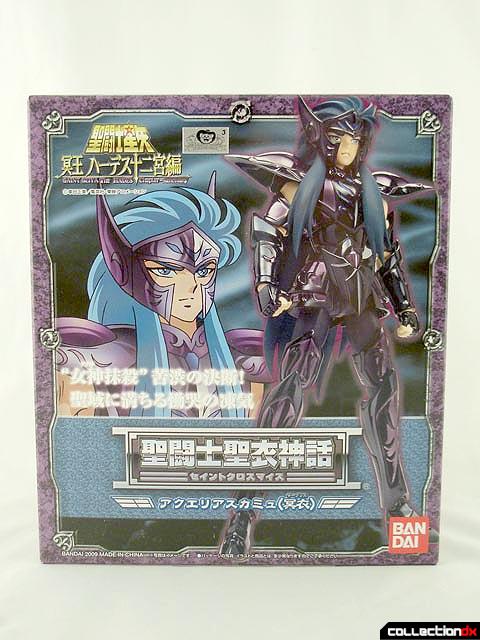 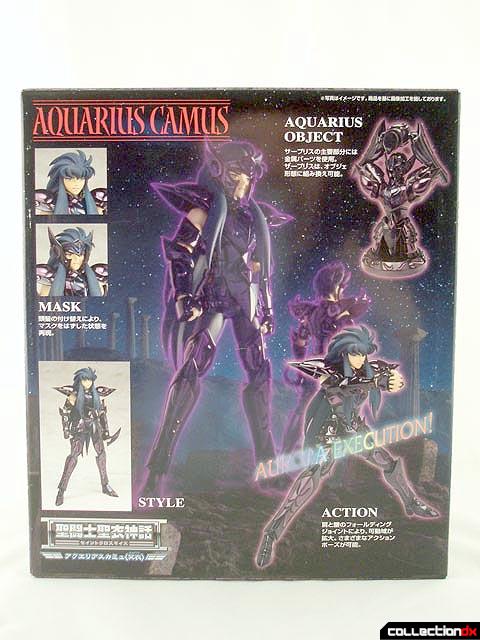 The package is the usual cardboard shadowbox that opens very much like a book. Even going so far as to decorate the spines like they where ancient manuscripts. Generally you will always save the boxes for these figures as you need somewhere to store the extra parts and pieces and storing the spine oput makes it easy to locate a part or piece when you want it. 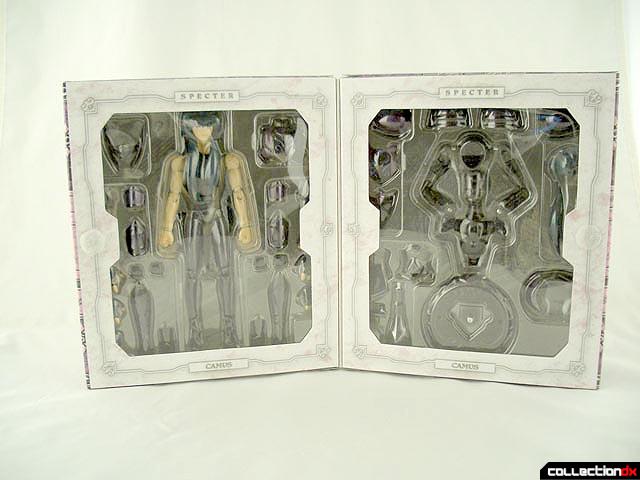 Inside, clear plastic trays present the figure and all the parts and pieces neatly and sensibly. 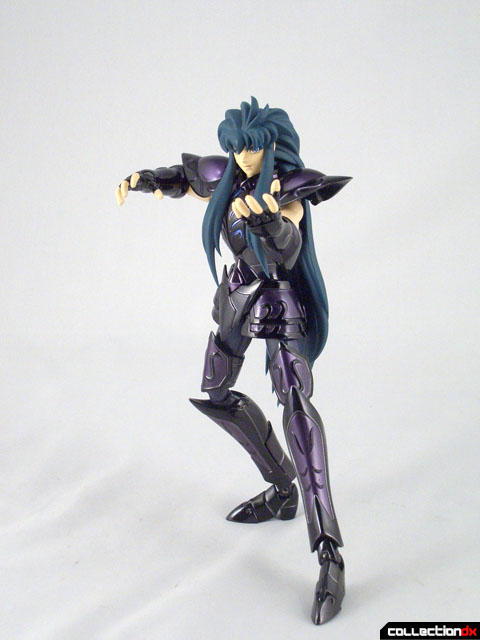 The actual figure of Camus is an all plastic type-3 style with over 40 points of articulation. The feet on the figure are pose-able as well but are cast in die-cast metal to match the look of the Cloth (or armors if your new to Saint Seiya.) 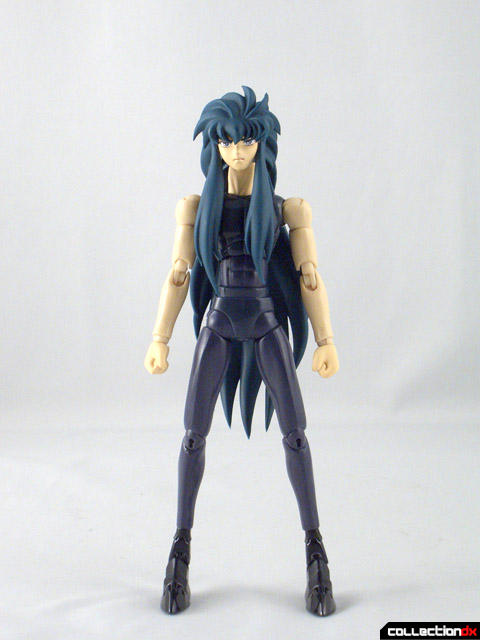 While the figure looks spindly without the armor, that is OK as most collectors are looking to add the metal armor to the figure anyway. Being a bit thiner allows these figures to look “right” when the armor is attached to the figure. 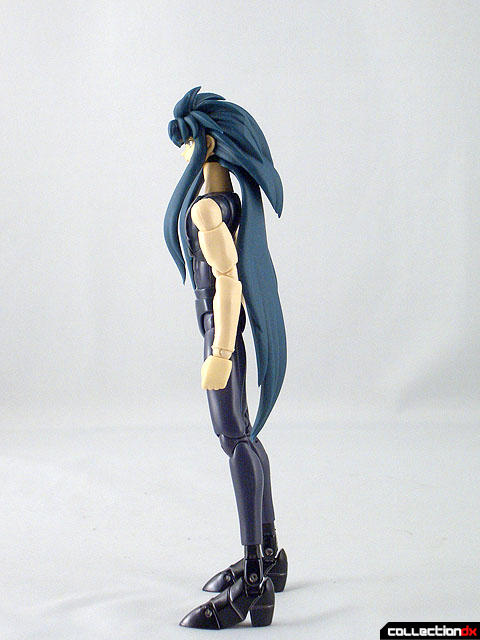 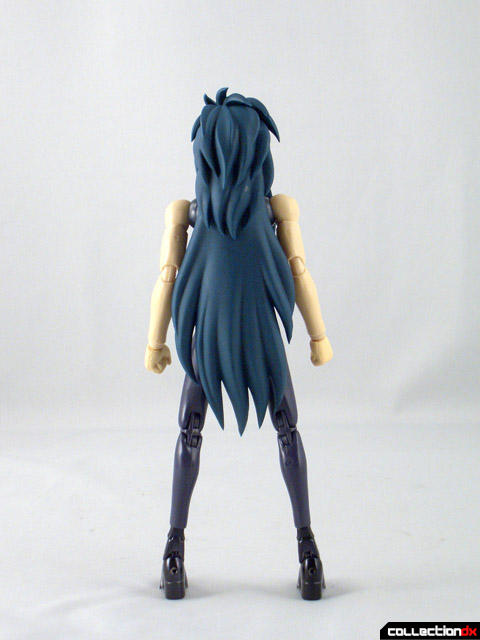 Every Cloth in the Saint Seiya universe turns into a statue (called Objects in the series) of the constellation that Cloth is designed after. Aquarius is of course the Water Bearer (and my birth sign) 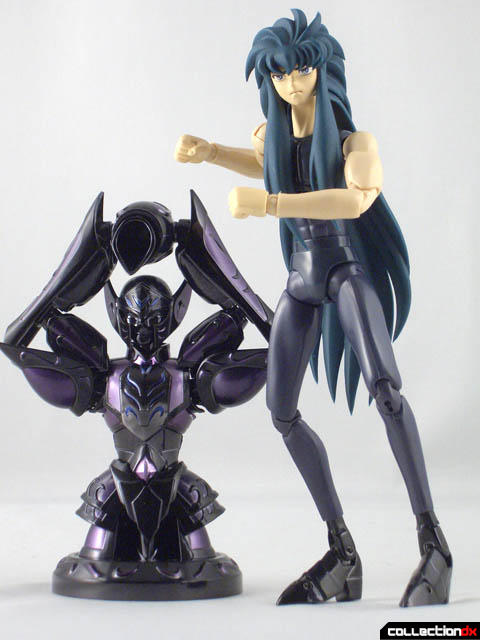 In Object mode the Cloth looks very nice. Basically you put the armor plates onto a “dummy statue” to make the object mode. 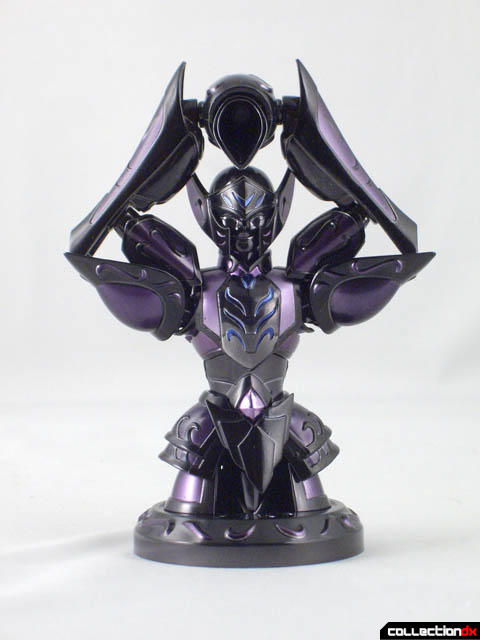 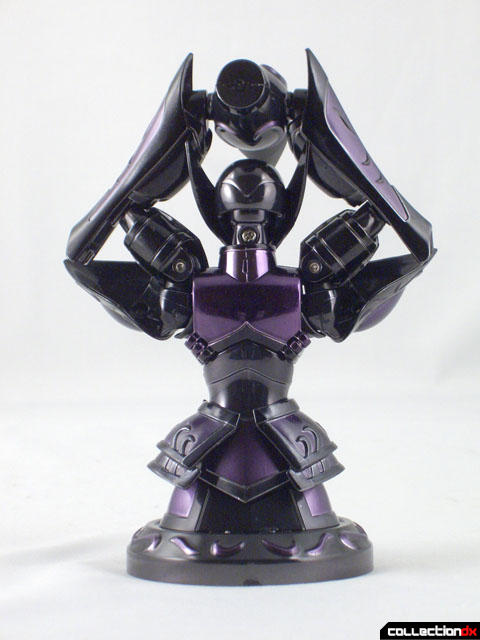 I will not be using this mode for my display but it's always nice Bandai makes sure you can do this even if you do not actually see a Cloth in this state in the actual series or manga. I'll be displaying mine doing the Athena's Exclamation! 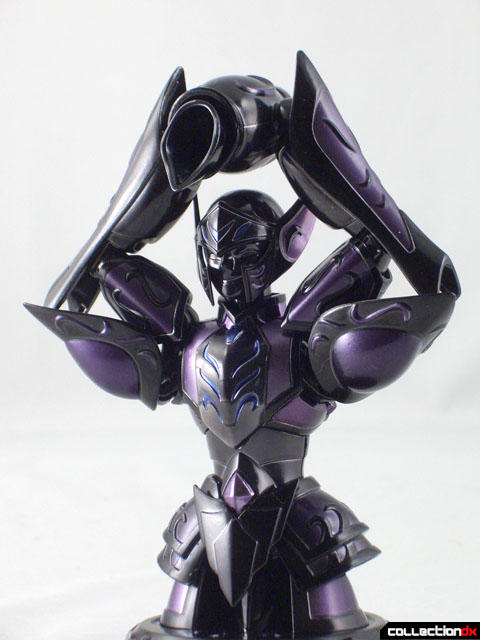 Once the armor is on, Aquarius is good to go... 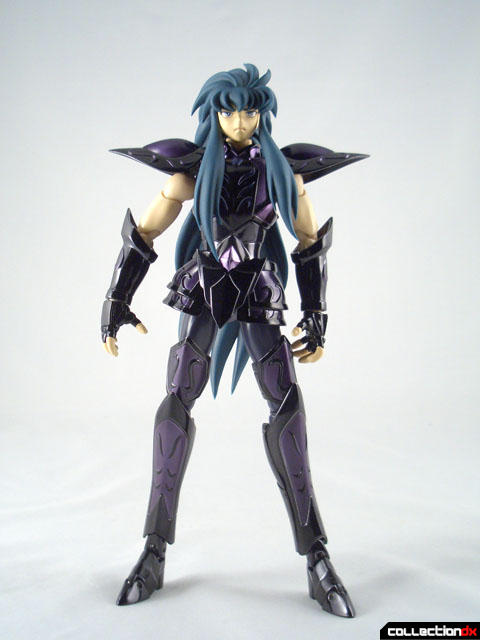 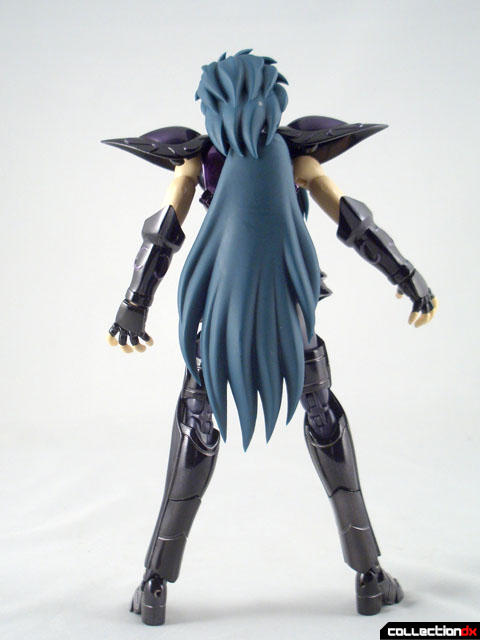 Bandai has added slightly more complicated hinging on the shoulders and hip armors for this series of Surplices allowing the figures to be posed in a wider range of motion while keeping the armor looking natural. 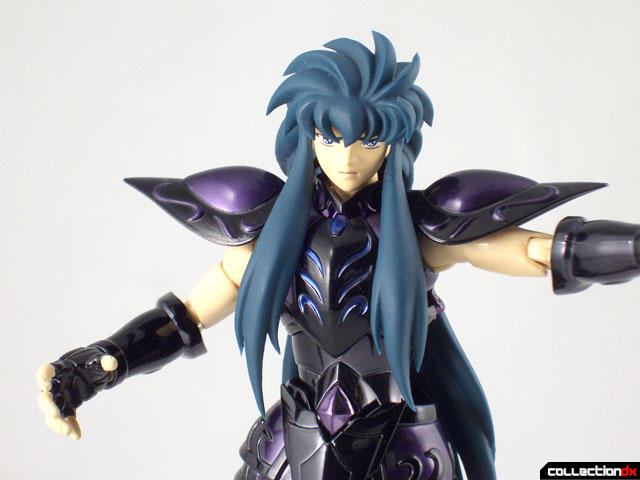 Paint detail is very good on my sample of Aquarius (I noticed some air bubbles on the previously reviewed Gemini after the fact...) and the metal content on this release is very high. 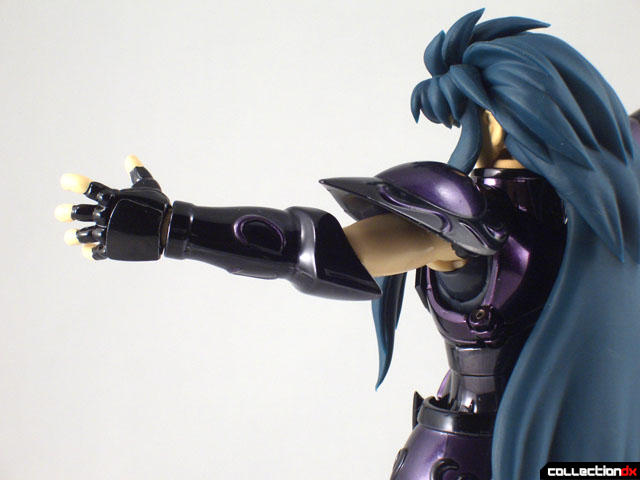 If your a fan you don't need me to tell you to get it. Now I just need to get my hands on a Scorpio Milo and I will be able to display that classic confrontation on my self and most fans would want to too; as for non SCM collectors, well if you like the design and dig metal armor the series is worth a look. Just find a design you like and give it a try. 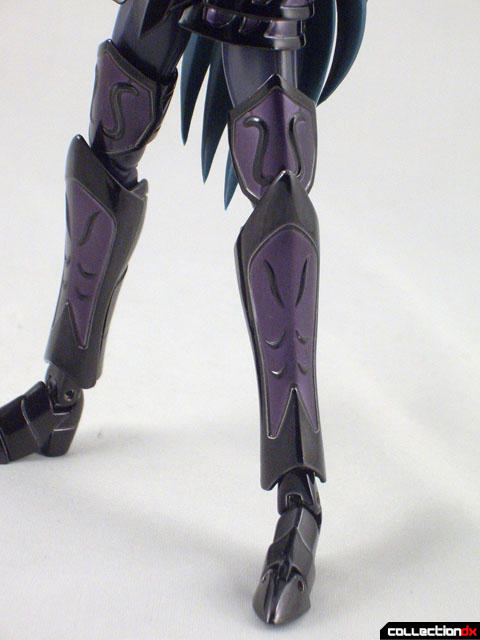 Just know this really is a series of figures meant to be posed and displayed. There not really toys for kids as keeping track of the parts would/could be a nightmare. But I can tell you this. Every time someone looks at the collection that is my mish-mash of stuff. People's eyes always light up with curiosity when they see the Saint Cloth Myth shelves. They truly stand out in a collection. 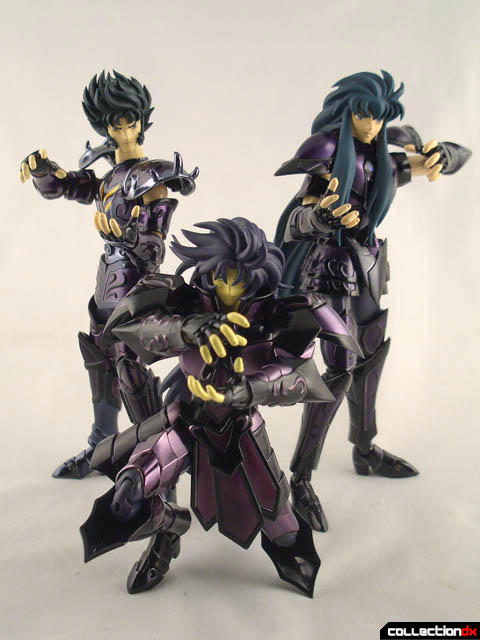 3 comments posted
Something to think about

Hey there, nice review. I like the way you've posed the 3 samurais in your video. Have you thought about the idea of animating them in stop motion I wonder?

Something to think about.

Yes, I understand where you're coming from in terms of stop motion labor. It's time consuming I know, but once you roll the project's rough cut after production's end; the reward can be amazingly magical.