The space battleship Andromeda was seen in the second season of Star Blazers (I will use the US rendition for all review context). The Argo [Yamato] had already returned, the Earth was rejuvenated, and the Defense Force had amassed new vessels using technology that had built the Argo. Gone were the blue, red, and gold useless ships that got destroyed in the first minute of season one. Now a fleet of gray and gold filled the skies, all with wave motion guns, ready to fight. The flag ship was the Andromeda, with TWIN wave motion guns, a modern design, and sleek lines that grabbed our imaginations as it blocked the Argo's new and desperate mission to investigate a comet streaming towards Earth. I am in love with the Argo, and always have been. How dare they talk of "mothballing" my beloved vessel? My brother, on the other hand, was in camp Andromeda, as were many of my friends, and I must admit, I secretly loved its look, lines, and presence! In chogokin collecting, Andromeda has been shockingly absent/limited until Marmit released this beauty in 2008. 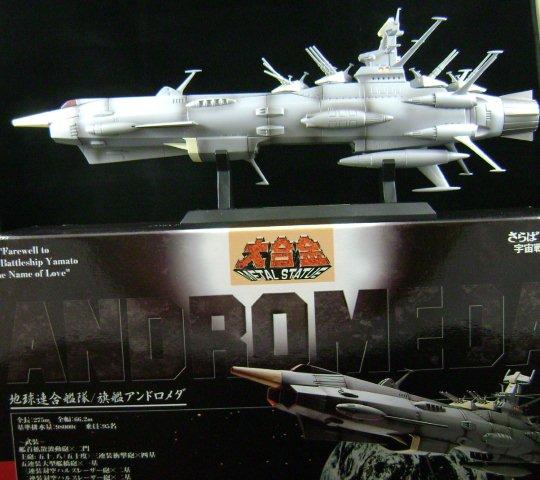 The toy is 17.5 inches long, with an all die-cast fuselage. 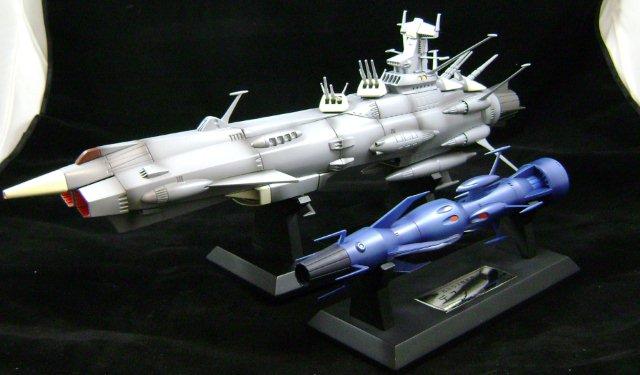 The main wings, all small fins, and lower engine pods are plastic. 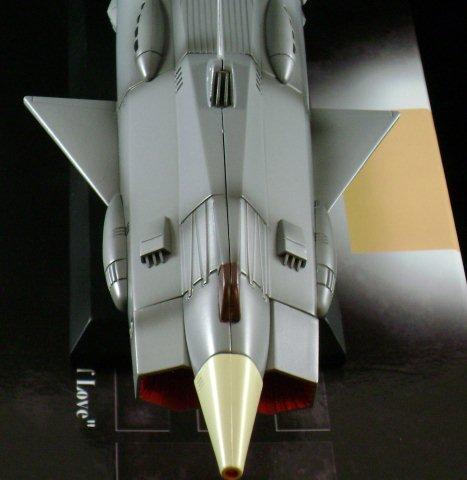 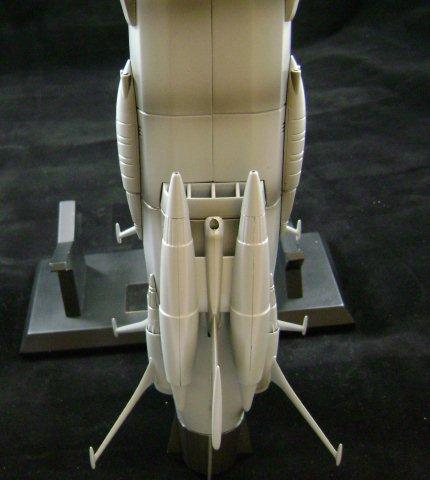 The guns are completely plastic. 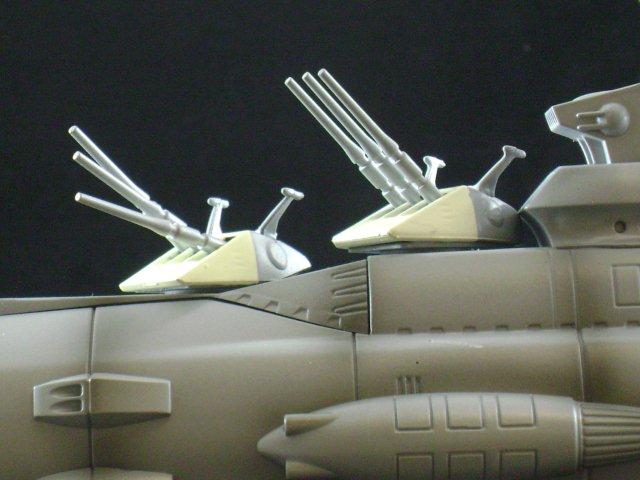 Parts of the crow’s nest are plastic. 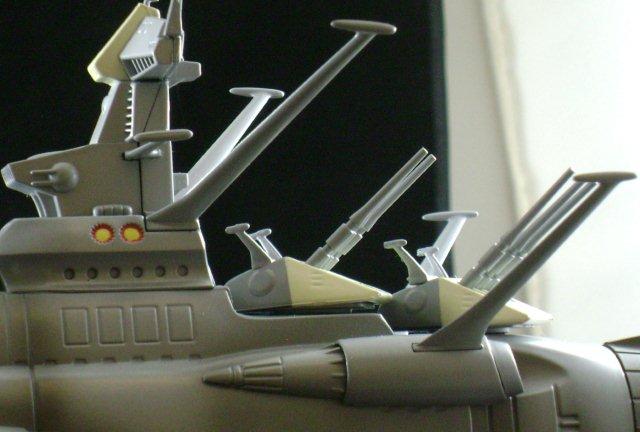 The rest is all die cast glory! 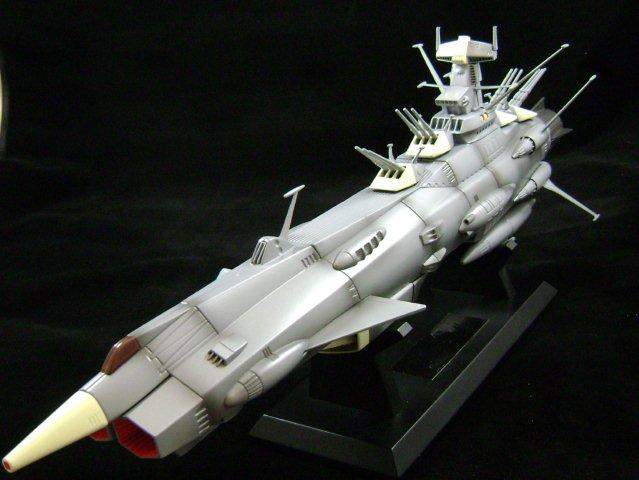 It comes in the standard, for this line, hard cardboard picture-laden box that slides over a white bottom in which contains a two part Styrofoam system. 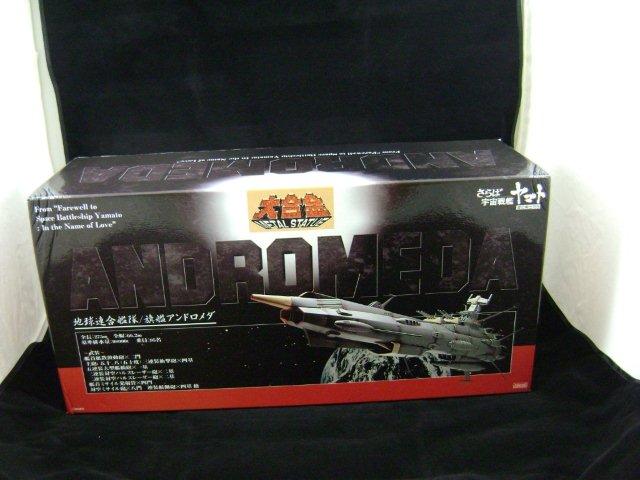 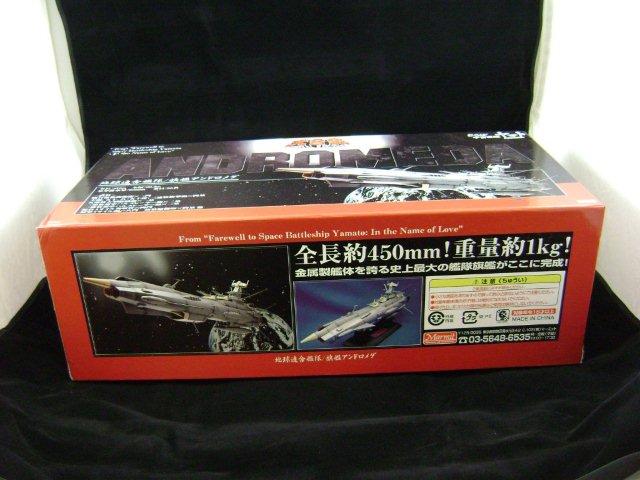 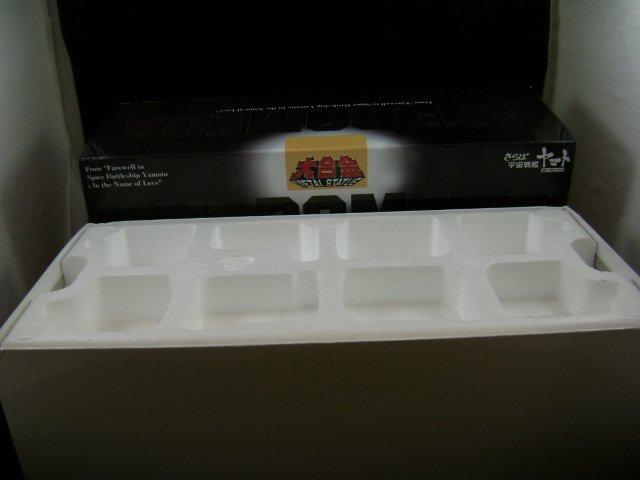 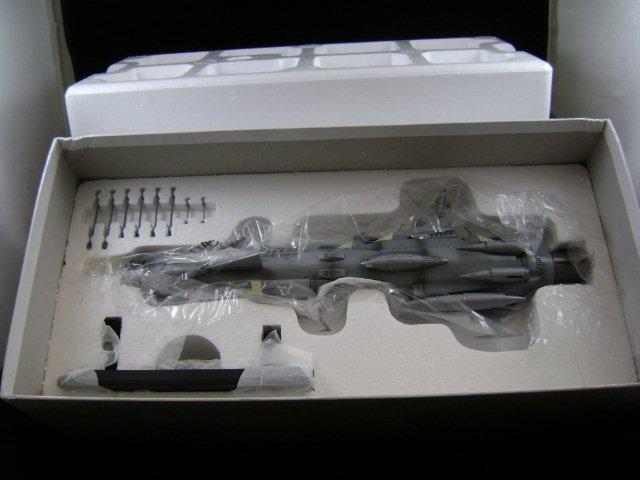 The packaging seemed ok (I added the plastic and tissue paper, it was bare by factory), but the ship must be able to flop around in the center, (might have needed Styrofoam support pillars like most Chogokin ships have...) because my box had crushed corners from rough transit, and both antennae had broken off the crow’s nest. 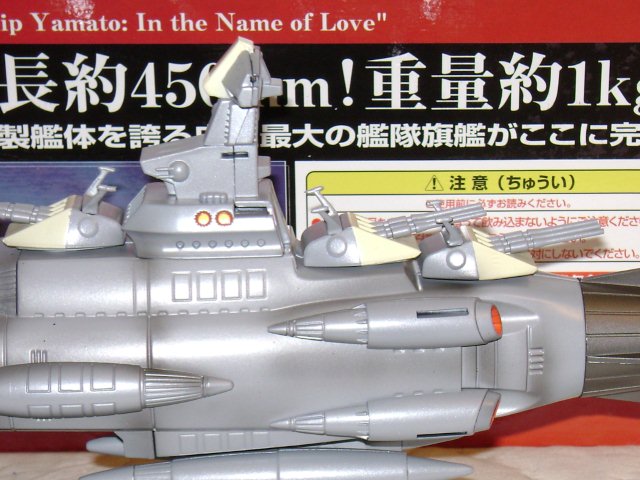 Literally a pin-head size amount of glue later and I was good to go. 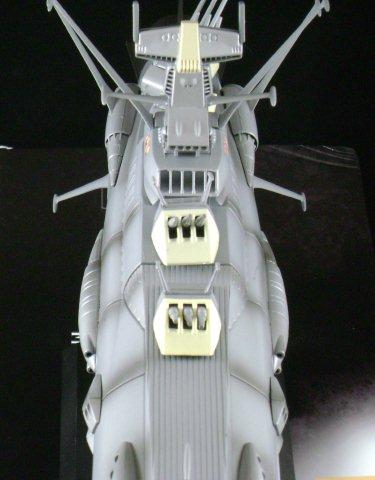 I am still disappointed about the packaging protection/design from such an expensive Chogokin. In addition, there are some paint flaws that you cannot easily see in the pictures or display, but up close you can see some minor chips and uneven white paint here and there: 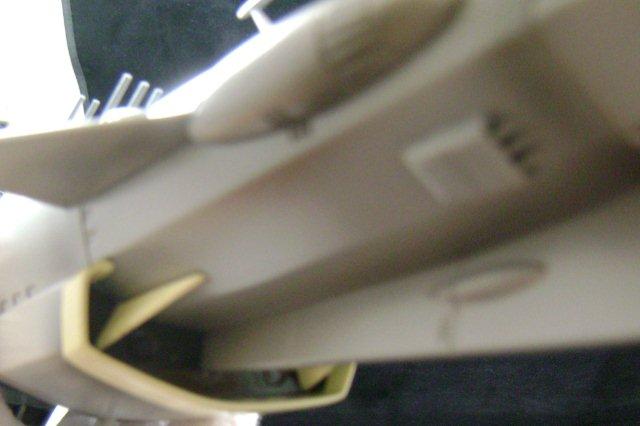 The paint flaws might be because of its rough transit, but the review by Sanjeev on the Marmit DaiGoKin Grendizer had some comments from readers similar to mine about paint issues. Overall I may try to touch it up, but if I am smart, I should probably live with it, the ship still looks great...just not perfect. 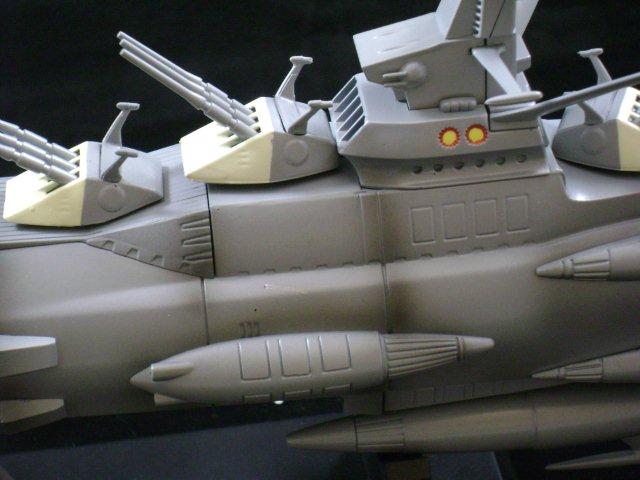 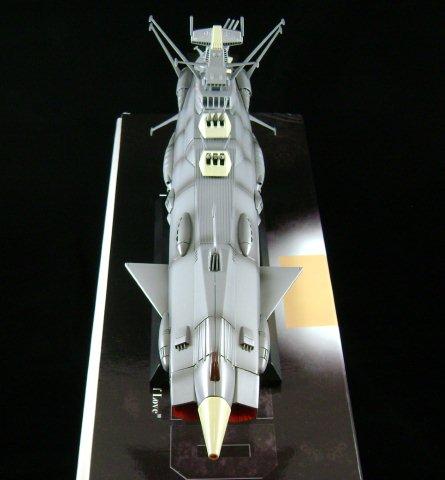 After you pop in the various fins (eight), all you need to do is rest it on its cool stand. The stand is like the Deslar Ship, solid wood feeling quality and a metal plaque in Japanese that I wish I could translate... 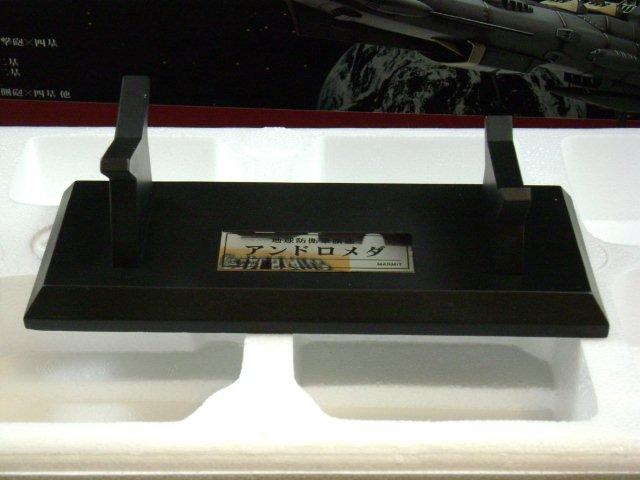 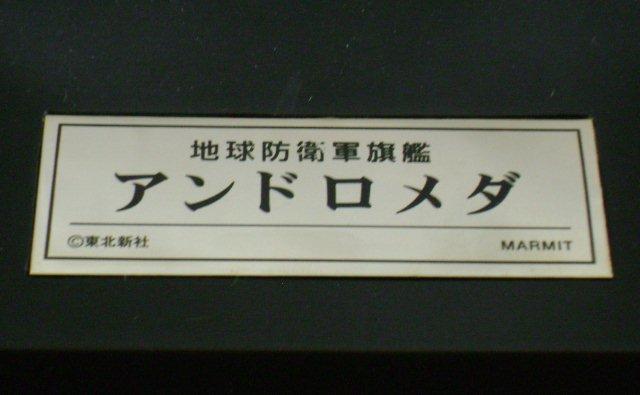 I love the amount of die-cast and sturdy feel, as opposed to the model-like fragility of BPX-01 Big Scale Yamato reviewed by Josh, but I would still have loved some sounds, light up features, and accessories for 400 USD after shipping. Marmit did paint in nice red and orange colors to look like the gun and engines were powering up: 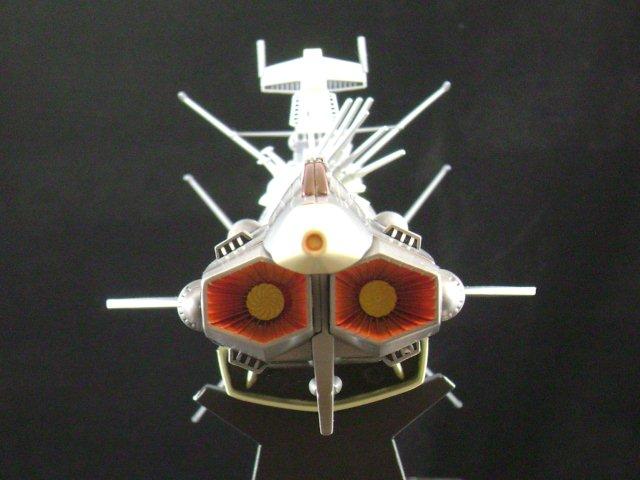 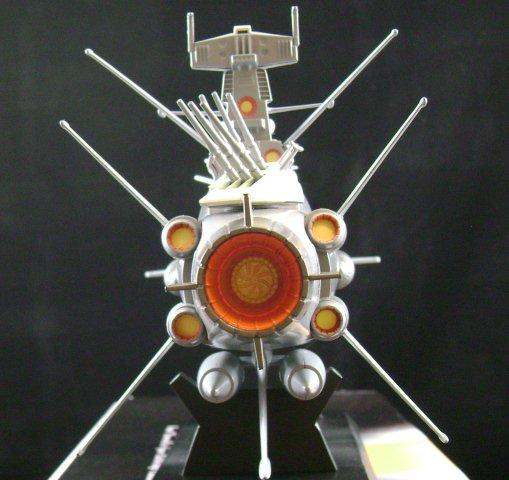 Lights and sounds would make this the "holiest of holies" (Star Trek reference) instead of just great...still top five of my collection. Articulation is limited to the guns, but they do rotate fully and each individual barrel does move independently (need to tilt barrels to start, because of top fins on turrets). 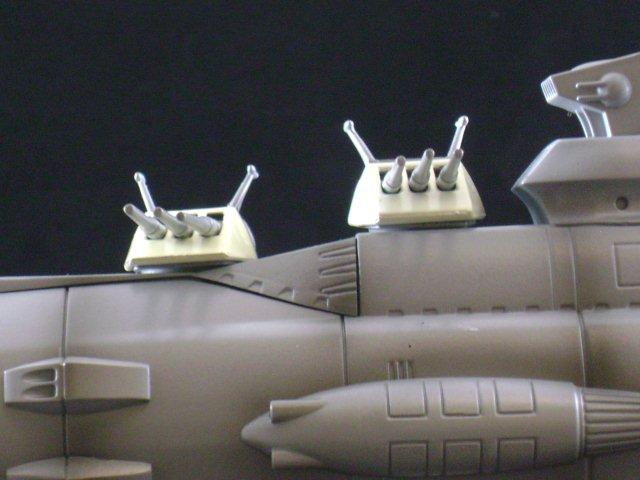 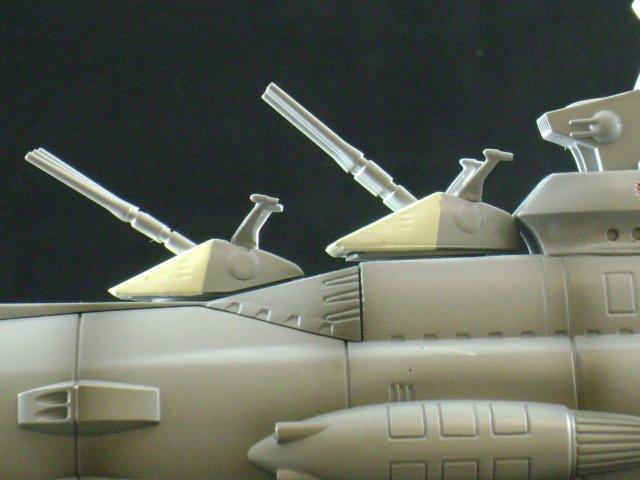 The Marmit DaiGoKin Andromeda: is it a last-minute unique Argo-type victory in the face of a sea of overpriced Chogokin, or a disappointing Gideon-etched smudge on the die-cast toy landscape? For the price, probably the latter to many, but for its die-cast content, shear weight, impressive stand quality, and the magnificent 17.5-inch presence in your collection... its "we're off to outer space".... for me! 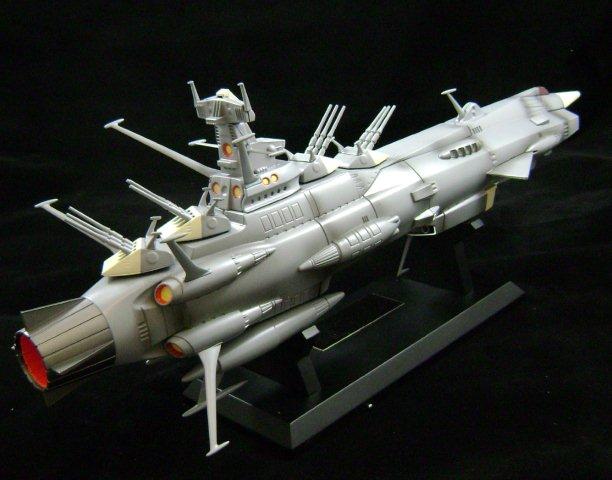 You have may missed out on this original version (weathered looking and deep gray), and the Anime version (clean lighter gray/gold paint job-of course the one I really wanted and never saw, other than Amazon JP for 1000USD plus shipping...geez), but you can find the metallic version to pre-order! Also, If Marmit is not your company, Bandai has just announced a new Andromeda toy in their Soul of Chogokin line as well! 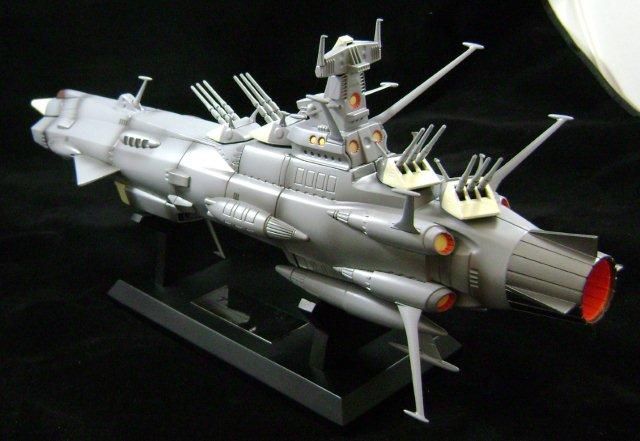 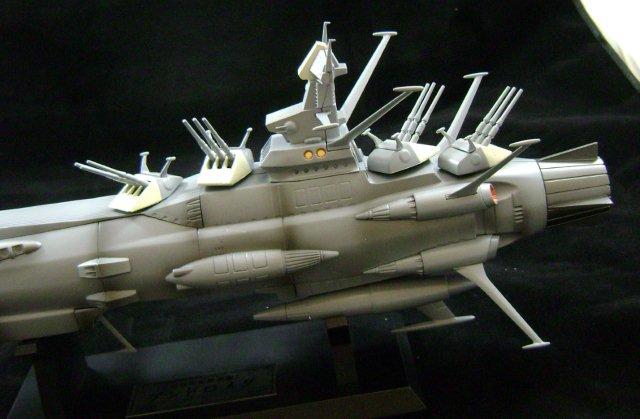 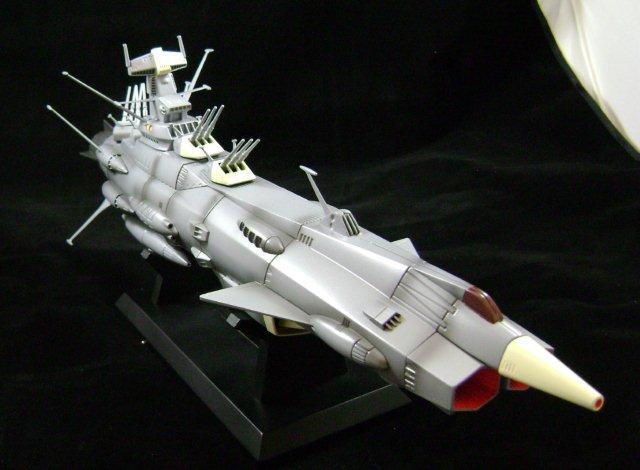 I believe the kanji read "Chikyuu Renpou Gun Senkan - Andoromeda" -- or, translated into English, "Earth Federation Army Battleship - Andromeda". I could be wrong, but I'm fairly sure that I'm close.

Pretty awesome. I liked the Argo design a tad more, though this is quite good. $400 though? You're a braver man than I. I'm glad I don't get into the ship collecting. So many cool Japanese sci-fi ships. I just stick to monsters and robots... For now.

Thanks for the review. It nearly KILLED me to pass on this one, but money was way too tight at the time. The Andromeda was long overdue (Mechanic File, anyone?).

The metallic color doesn't do it for me, but I just saw pics of a prototype Soul of Chogokin version, done in the same style as the GX-57. Anyone know any details about that? Getting a tricked-out Andromeda, even if largely plastic, would rock.

5 pounds, it is die-cast..but not solid, like it has space in the middle...like most robots.

It went out fighting the Comet Empire, man. Last survivor of an entire fleet. Destroyed as it's captain gave our heroes the key to victory.

Boba Fett fell into a giant, toothed and tentacled, rectum.

Not equivalent by any means.

Funny, i was going to rant...how personal
attacks are totally uncool and the word "rectum" is kiddish and incorrect, and finally stick up for my opinion...but then i wondered...if "starblaser" editing colored this event...well I had to delete my words and maybe i remember it wrong as a kid...but on youtube they have http://www.youtube.com/watch?v=PlgAbO9cQYw
and it shows Andromeda taking like a million hits, Gideon telling yamato what he should have done, and then with his ship totally inflames...he rams the middle gun area of the ship. Thereby, Andromeda and Boba Fett have zero in common. Now I just have to figure out if my childhood memories are flawed or Starblasers did have the whack demise like i remember and cut out the ship ramming part...I know they cut out the bodies being killed. BTW watch the JP version of the assault on the comet ship by the fighters and Marines...much more realistic and gory than the us version...

Undoubtedly a nice diecast model but too expensive for me. I'll stick to classic robots I've watched in my childhood. Thank you for sharing this great review.

SOOOooo many Star Blazer memories just came flooding back! I want this SO bad...but that price...ouch....