Every hero needs a villain, and every villain needs a totally posh Mobile Suit to show the hero just how fabulous he is. Enter the GNMS-XCVII Alvaaron, a robot that is simultaneously gaudy and annoyingly overpowered that is feels like you're being charged a small fee just to gaze upon its golden form.

Robot Damashii is the successor to Bandai's infamous "In Action" series. These action figures utilize less PVC in their construction than their forebears, instead opting for more hard plastic with lots of those little hollow pins. The end result is a line of solid, playable action figures with subjects ranging from Gundam to recent Real Robot series that aren't Gundam.

Put both of these things together and you get the ultimate lord of the bargain bin, the Robot Damashii No. 33 Alvaaron. 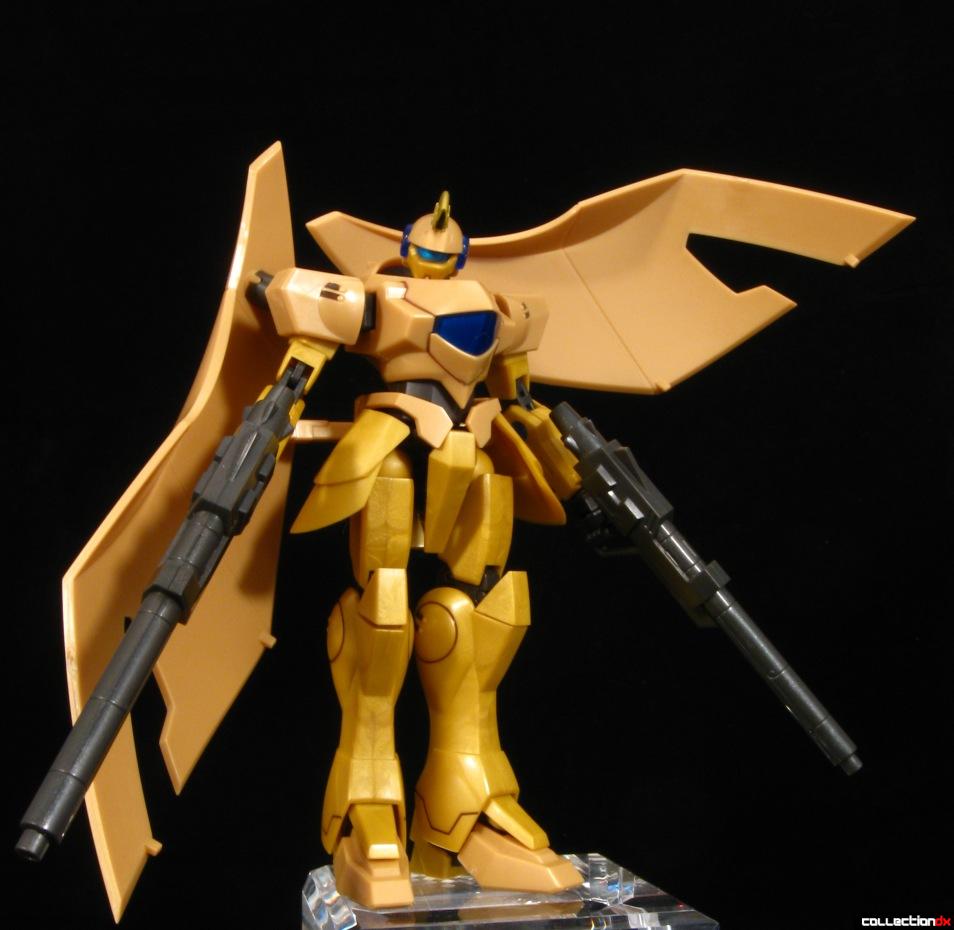 The Robot Damashii Alvaaron is a very faithful reproduction on the anime design, which is a mixed blessing. The Alvaaron itself is one of the more straight-forward Mobile Suits to ever take the role of "end boss" and as such its overall design is almost purely functional. In fact, the Alvaaron has much more in common with the basic GM Mobile Suits than any of its fellow one-of-a-kind types like the Sazabi or The O. 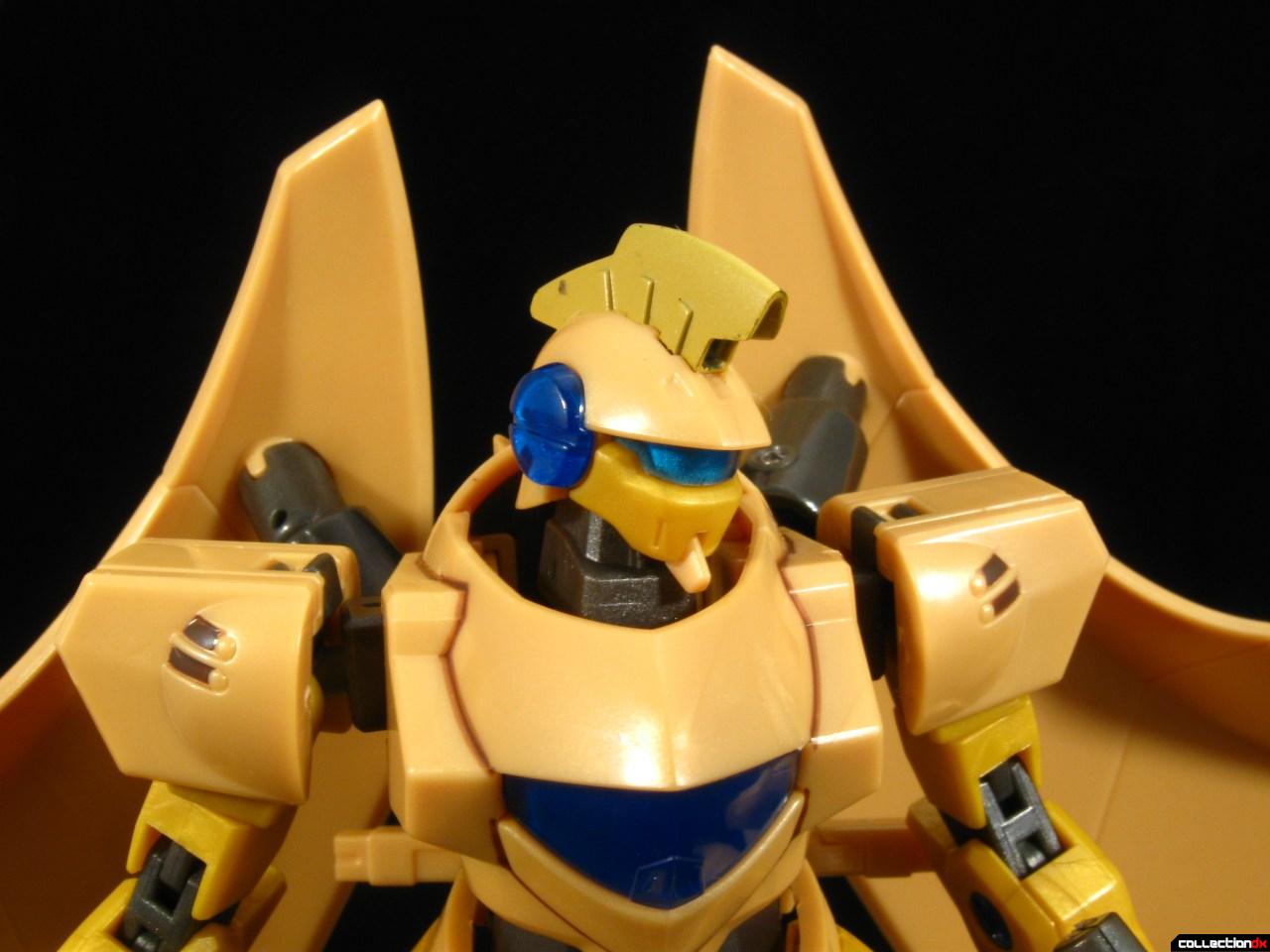 That isn't to say this figure doesn't look nice. The mix of clear parts, hard plastic, and PVC add up to give you a solid action figure. Although its overall height of 12 centimeters doesn't give him much shelf presence, the Alvaaron's is a perfectly portable toy. Leave one on your desk to instantly add some class to your plebeian existence. And don't forget to bring some of its optional hands; two fists, two holding things hands, and two open hands. 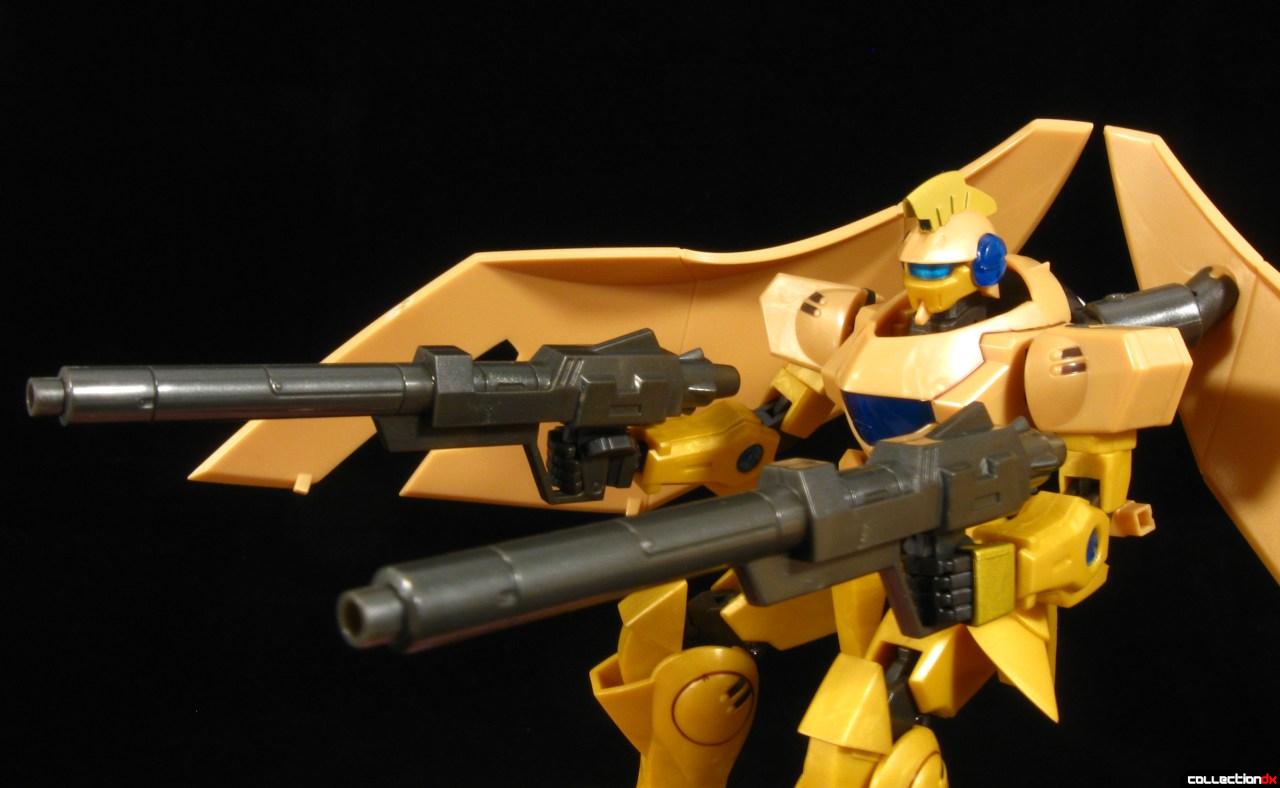 The Alvaaron's akimbo beam rifles are simple in design and color, but are still well matched to the gleaming war machine. 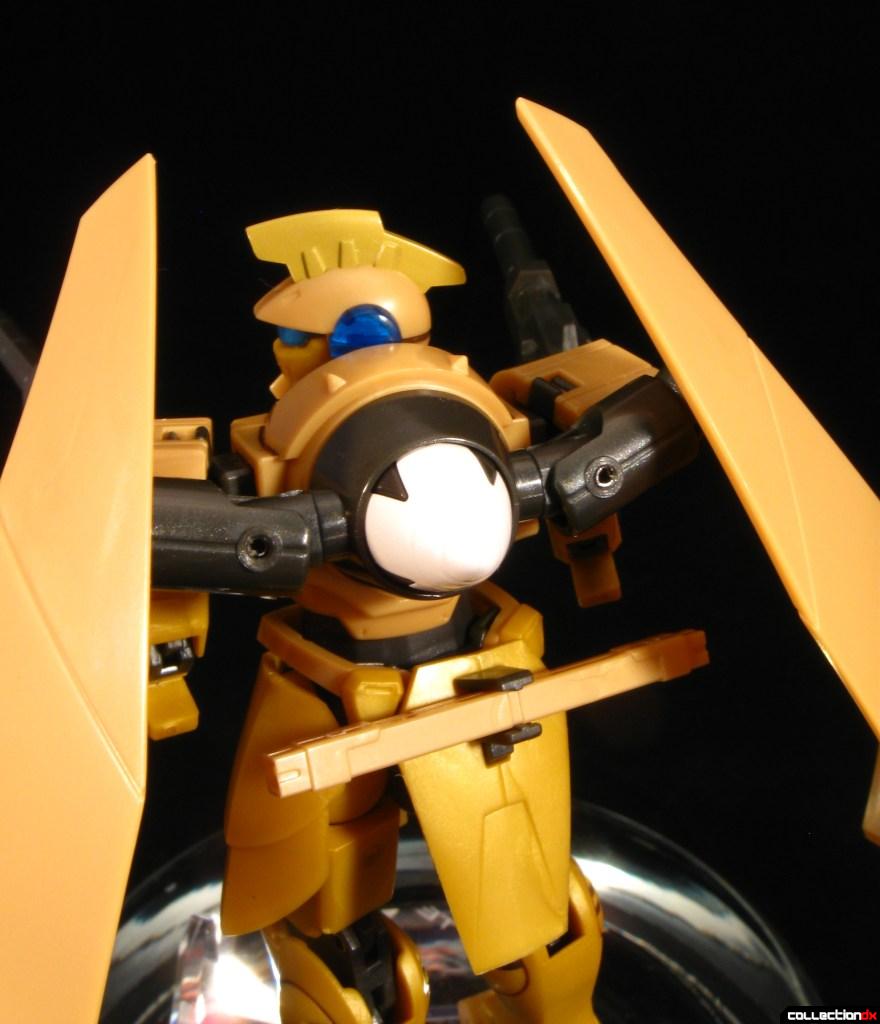 The Alvaaron's singular gimmick is a pair of articulated "wings" mounted via ball-joints to simple universal joints. These joints are mounted on a ring that can rotate around the conical GN Drive unit. Also the double beam saber can be stored on the rear skirt armor. 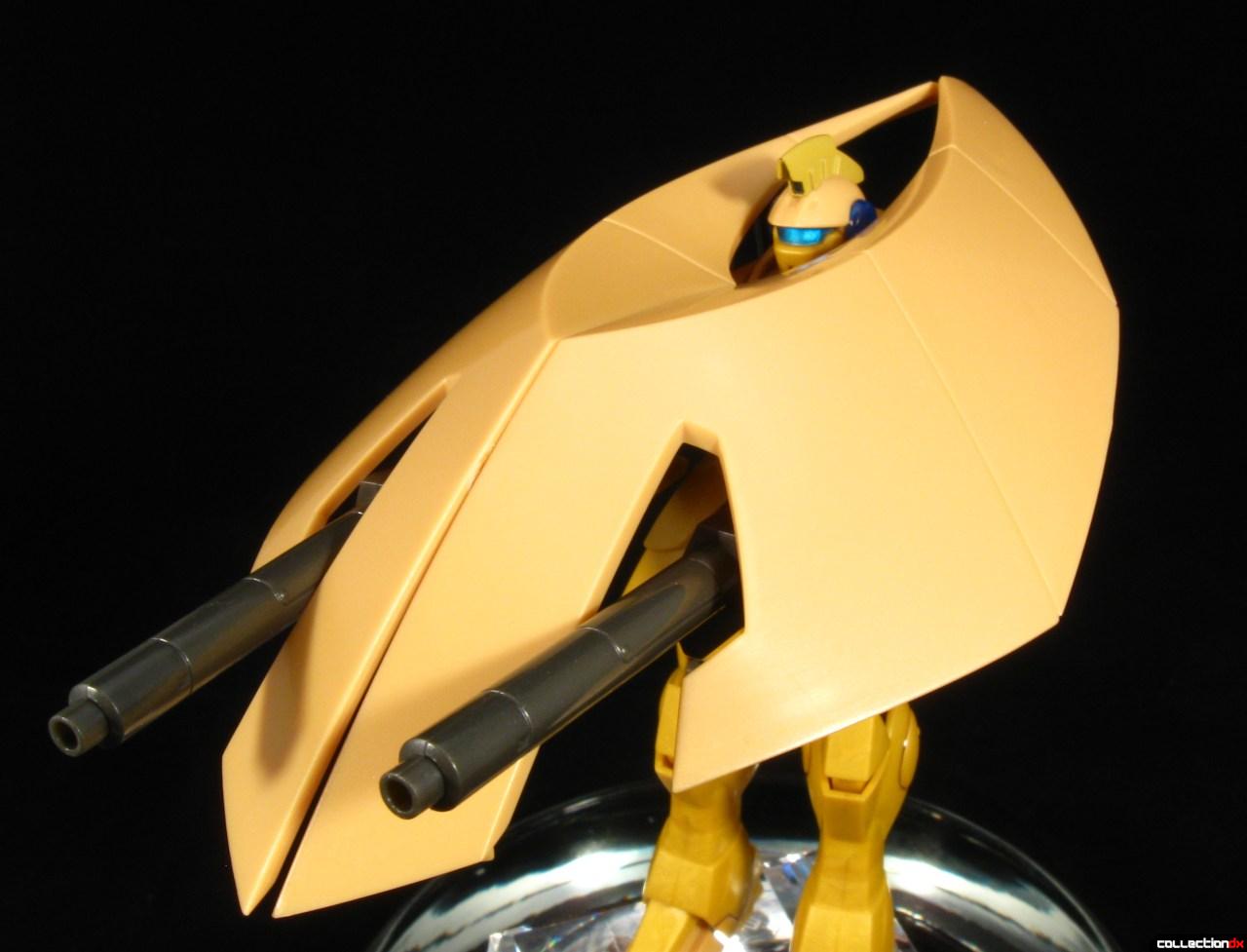 To be fair to this Alvaaron toy, it is missing the massive Alvatore Mobile Armor that the golden Mobile Suit derives much of its gravitas. You can of course position the "wings" for docking with the Alvatore, which quasi-exists as a plastic bathtub included with the deluxe release of this figure. 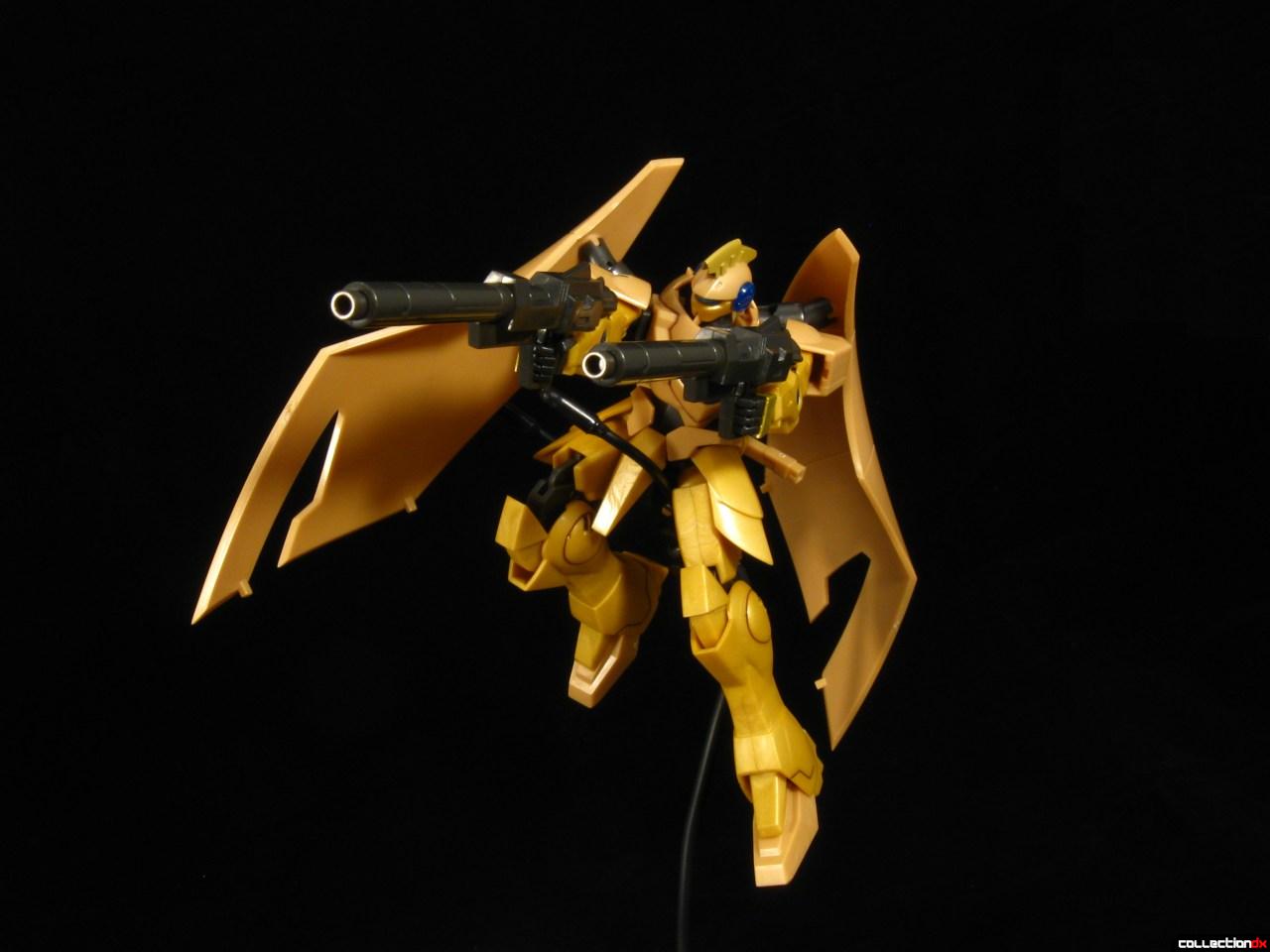 To this toy's credit, the figure is loaded with tight joints and is even fairly balanced despite its huge wings. Pay the Alvaaron some tribute and it will pose nicely for you. 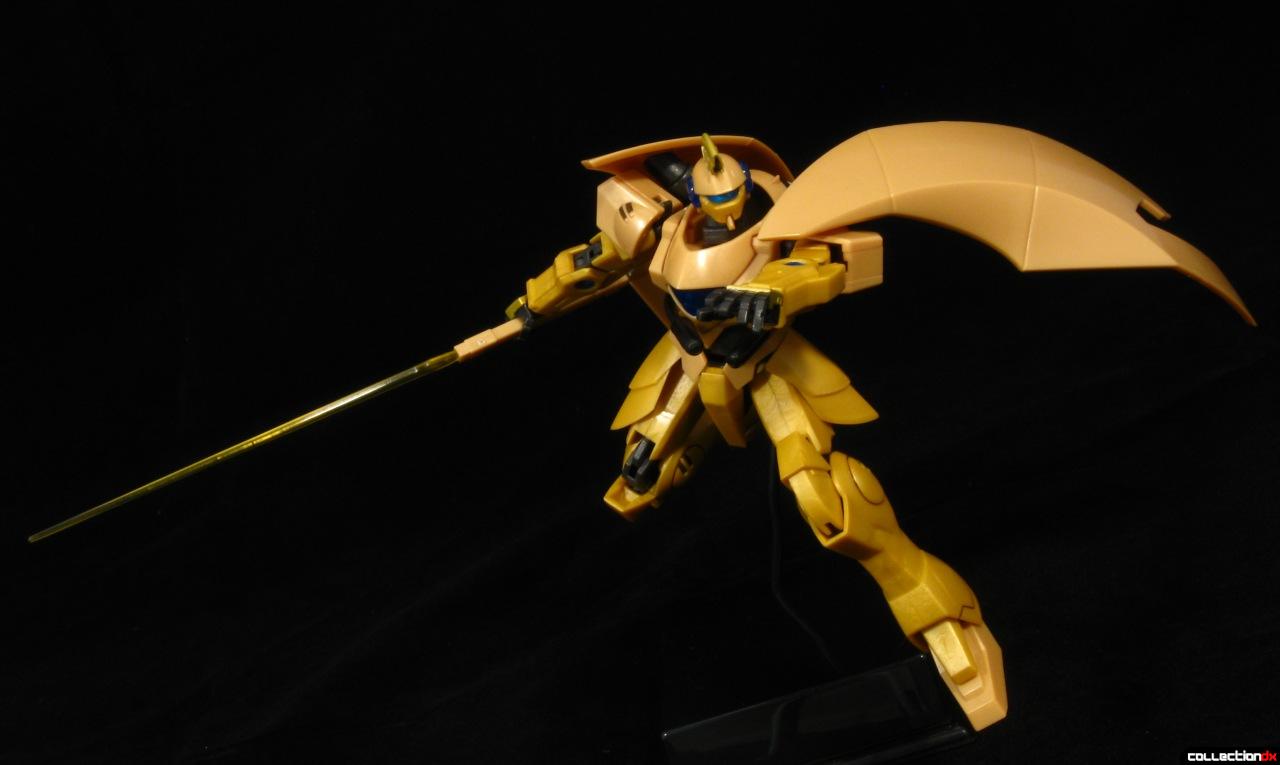 The Alvaaron comes with a pair of golden beam blades for its double-sided beam saber. 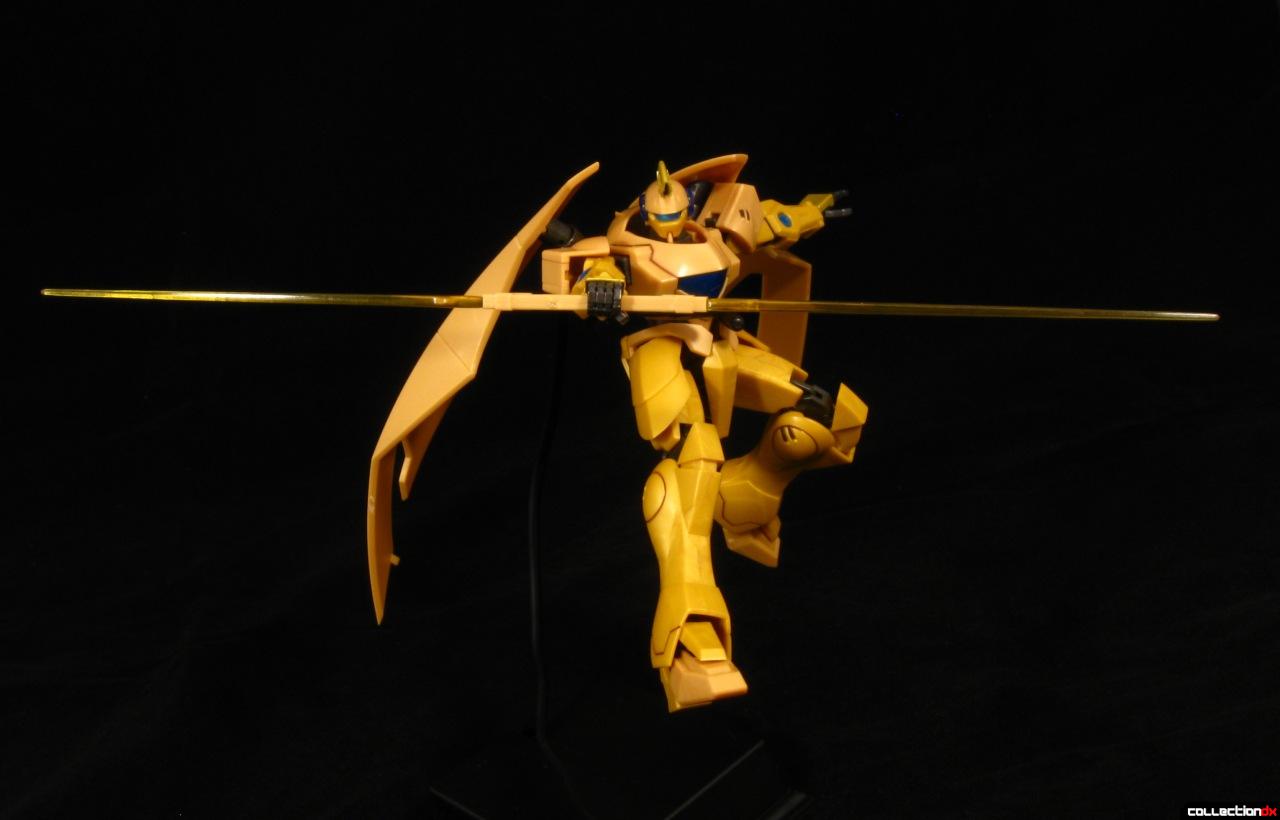 The double-saber is quite large and lets the Alvaaron get its Gelgoog on. 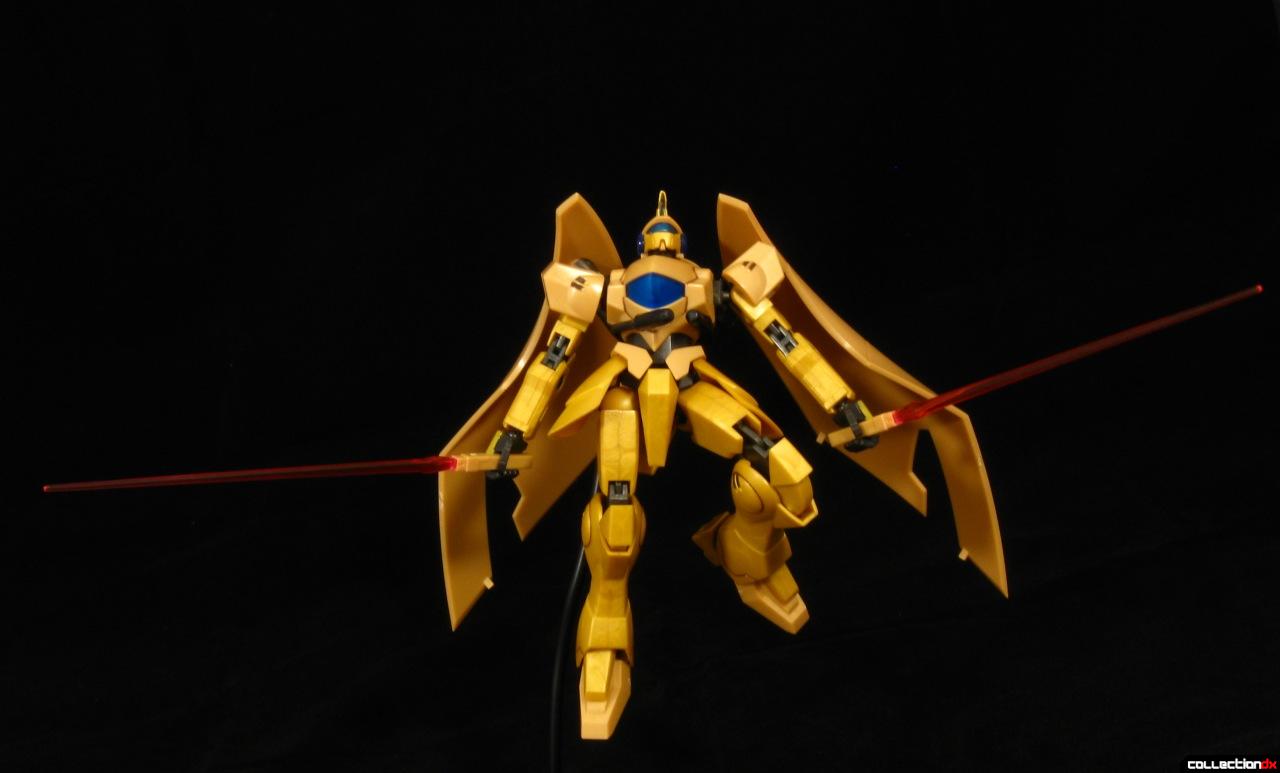 Also included are a pair of separated beam sabers. Now by default the Alvaaron comes with two pink blades in the package. The golden blades are included in a little baggy with a piece of paper proclaiming that these are "image color" parts as the Alvaaron is seen with golden blades in the anime. It kind of makes me wonder why the pink blades were included at all. Still, they are a bit more traditional so it is nice to have the option. 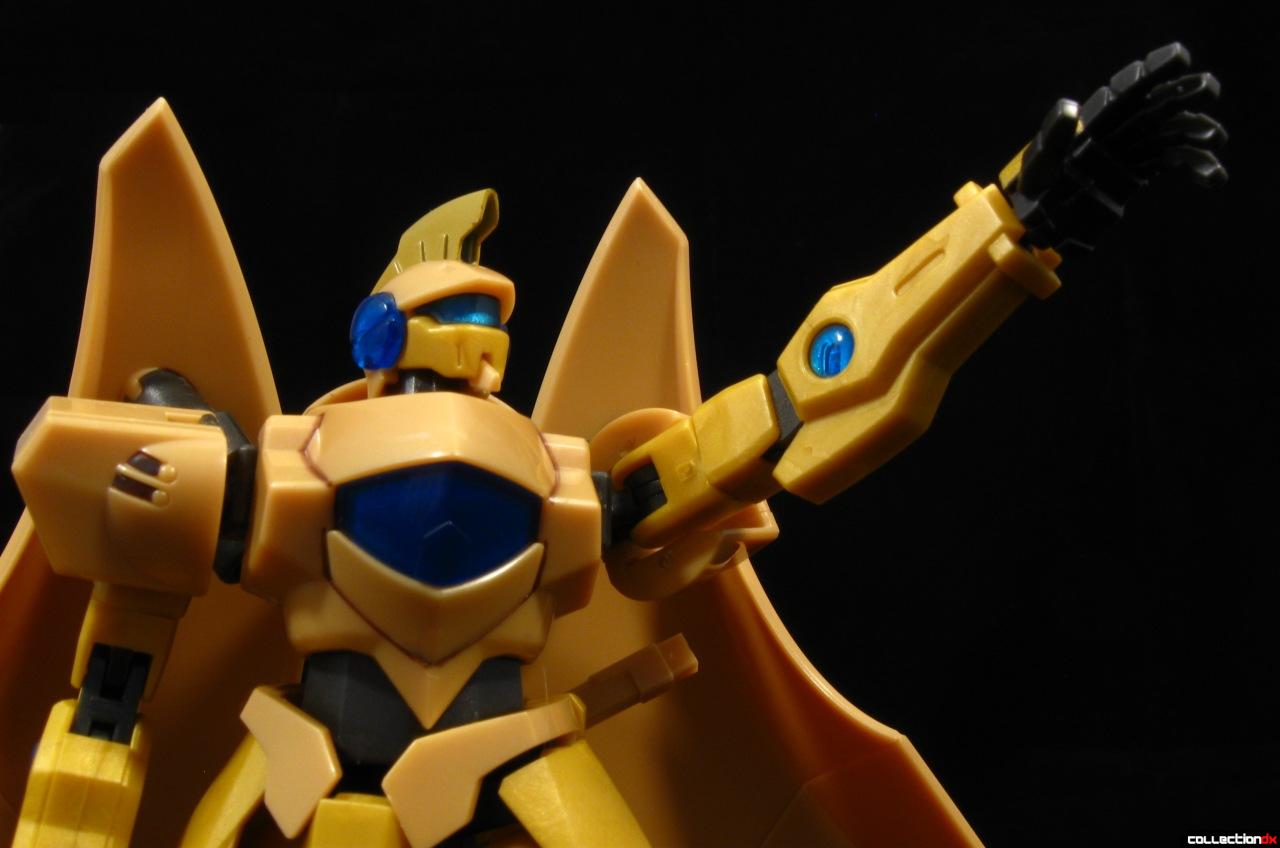 In the end, the Robot Damashii Alvaaron can seem kind of underwhelming. As toy technology has progressed to the point where an action figure can do almost everything it needs to, a toy is now just as defined by the character it seeks to create as it is by the strength of its build. The true "spirit" to this line lies directly at how much you the character moves you. Honestly, I like the Alvaaron. While it may seem more like an accessory for your Gundam Exia figure, there's a palpable charm to having some kingly hand candy. Even this small toy manages to look quite regal as the true sovereign of the GMs.

9 comments posted
I'm a bit of a fan of the

I'm a bit of a fan of the Alvaaron, but the DX figure was a little much for just half of the Alvatore. Looks like I'll have to get this figure now.
Also, is it me, or do they seem to think little of the beam sabers? The G30 HG Gundam had it molded in white, and HG 00 models either leave them out or mold them clear. Maybe some coats of orange would fix it.

Actually, there's a good reason that clear parts are molded in colorless clear plastic on many model kits - it allows the modeler to paint them any color. A colorless clear part can be painted with translucent colored paint, into shades limited only by the paints available, the modeler's skill in mixing colors, etc. However, a part molded in translucent pink or green or whatever can't be painted into a different clear color; it can only become a darker shade in the same general range of the spectrum.

Nice head design, but the rest looks so plain.

Class is in session.

I will agree the head design kicks mucho ass, and Im kinda digging those wing things, but over all he looks like a regular gold mech. Not taking
away from the toy though, it was a good review and the toy looks cool, just
a little plain as noted.

I haven't seen any of 00, so maybe that explains my confusion over why a stand-alone version was even released. It just seems so incomplete without the mobile armor base.
Is this supposed a gold suit in the show, like Hyaku-Shiki gold? My monitor is crap, so I can't really tell if the toy has a metallic finish, or if it's just yellow.

The Death Army from G Gundam is what I thought when I first saw it.

This toy is sort of semi-gloss brassy yellow. The "DX" version, with the bathtub, is painted metallic gold:
http://tamashii.jp/item/item.php?eid=01153
but nothing like the chrome we see on toys and kits of the Hyaku Shiki or Akatsuki Gundam.

I'd recommend picking up the DX Core of Alvatore set but it's a bit too pricey for what it it ,now they're all selling for quite a deal 'cause I get mine for just about $25-something. The gold paint finish also what made me dig the DX set more.