The YF-19 valkyrie comes from the 1994 OVA series Macross Plus. I won't go into the details again, but suffice it to say that it is one of my favorite anime.

Previously, Yamato had put out larger scale transforming versions of the YF-19, and then when they announced a GNU version, someone must have tipped off Kaiyodo, because I doubt it is just coincidence that both companies put out similar toys at the same time. We saw this earlier in the year with Mospeada toys - its just how the industry works. 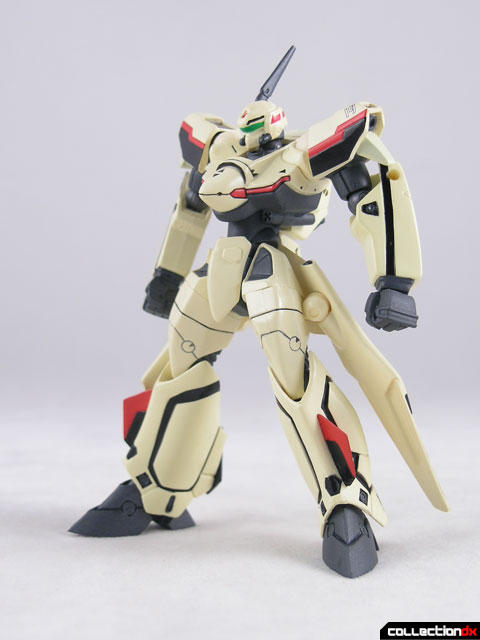 So lets cut to the chase. Is it any good? yeah, its really good. It's typical Yamaguchi Revoltech fare - if you've had one before and liked it you will like this. The proportions are a bit exaggerated for my tastes - the head seems a bit small and low to the shoulders, but it works. It's a very stylized representation of the mecha. The YF-19 comes courtesy of HobbyLink Japan 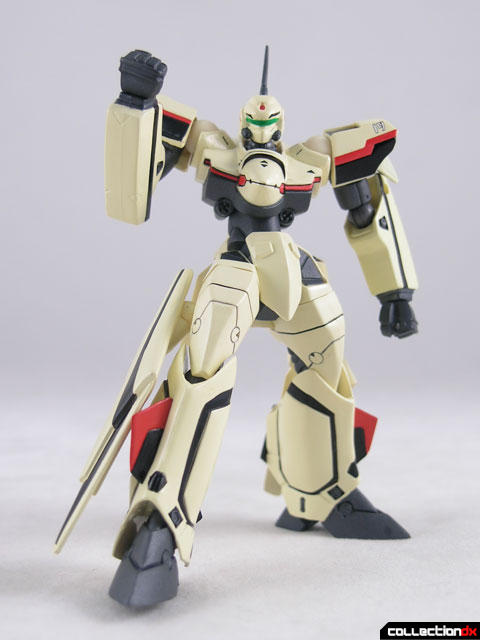 What makes this toy above average in my opinion is the accessories. Not only do you get the YF-19 and his gun, but you get fastpacks, a shield, a stand and even pinpoint barrier effects. While I prefer the styling of the GNU YF-19, this one has it beat on accessories. 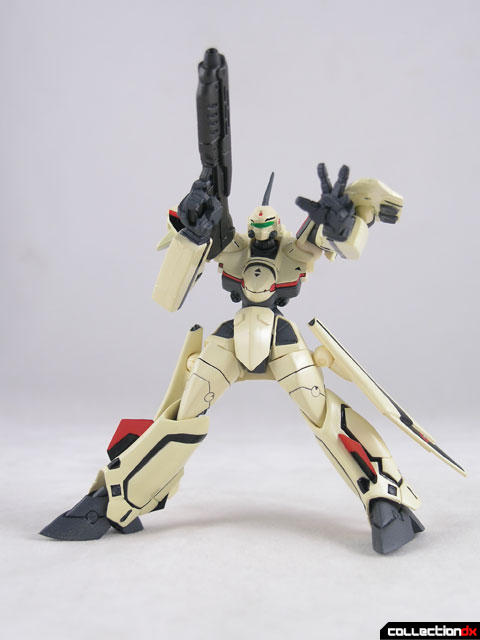 The gun is one piece and can be held by one of the variant hands in either hand. Nothing too exciting here. The gun holds firmly in the grip of the machine. 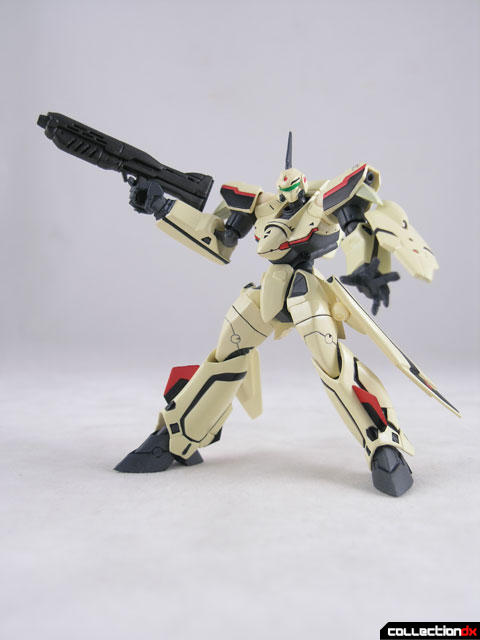 The shield attaches to the left arm by a Revoltech joint, oddly placed at the rear of the arm. 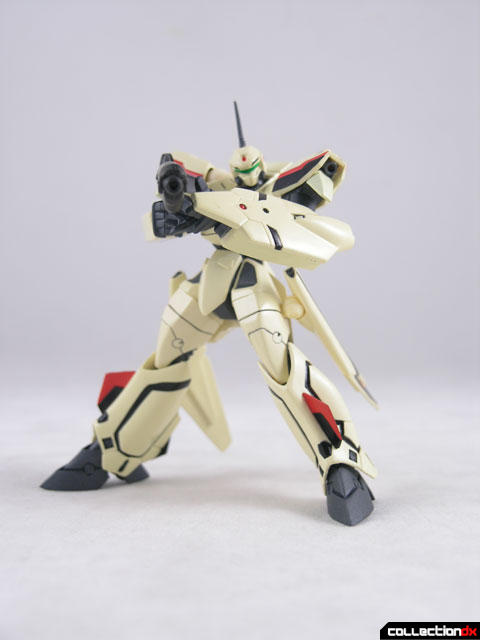 Fastpacks are attached to the end of the shoulders and the back of the legs. They are the same color and style as the rest of the figure, so they don't really stand out that much. They are nicely done and a welcome addition. 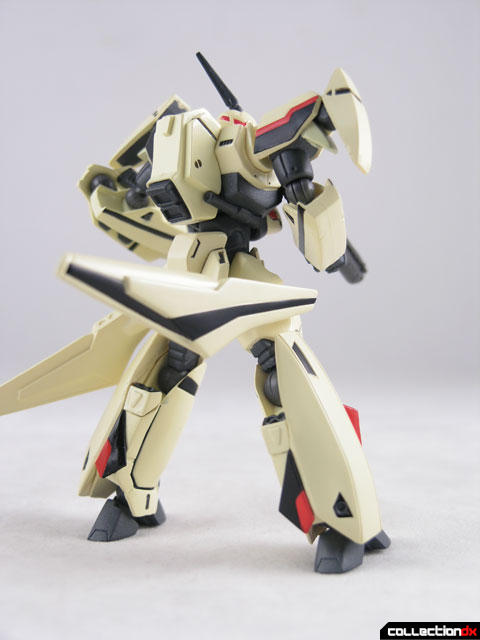 The pinpoint barrier system is kind of like an electronic shield that moves around to wherever a blast is anticipated to hit. This manifests itself as small glowing circles that appear on the surface of the valkyrie. Kaiyodo includes 2 pinpoint barrier shields that can be attached to the arms or the shield. 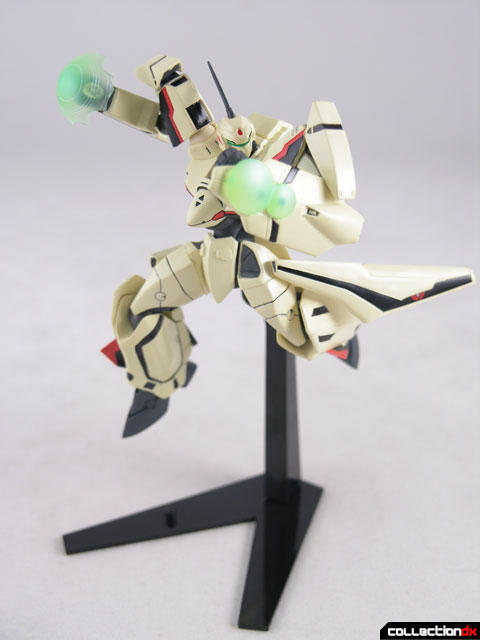 Also included is a green transparent shield that fits over the hand of the valkyrie. This replicates the use of the pinpoint barrier system as a weapon. 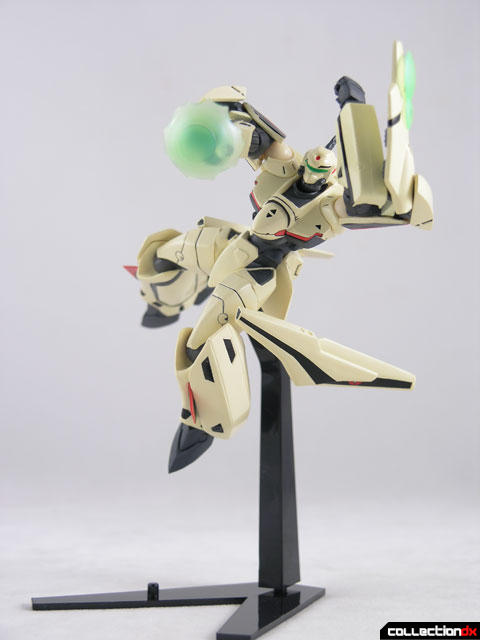 The stand is standard Revoltech fare. 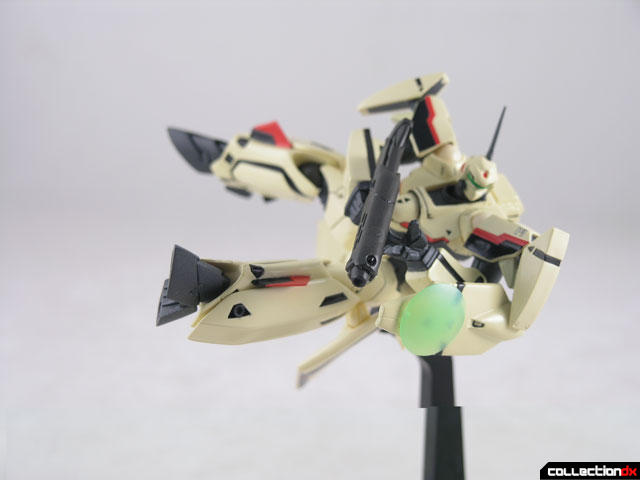 I like this one a lot, but i still am partial to the GNU series one. Don't misunderstand me - it's a great figure, but the other is like a breath of fresh air where this seems like more of the same. I suppose it is good that "more of the same" is pretty good. 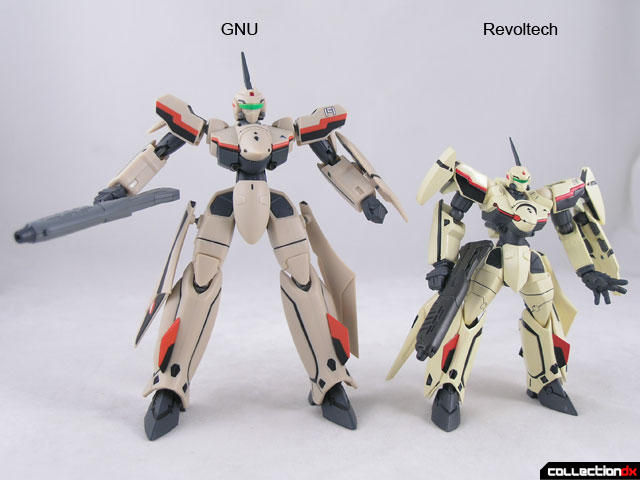 You can get your Revoltech YF-29 at HobbyLink Japan

Video Review and comparison with the GNU series

2 comments posted
does look good, but...

I am little bit disappointed with this one.
It definitely looks good, but with these fast packs really kill the articulation of the knee.
and the skirt part on the hip restrict the legs to move back.
other than that, it's really nice revoltech.

This is my favorite Macross figure produced in the Revoltech line, and personally I think it's a much better figure than that of the GNU version. To be honest, I can't tell you why, it just looks better, and the fact that it has a stand, more accessories and being cheaper it has to many points for it really than the GNU version.