Here is the set of five lions. You get one with every purchase. 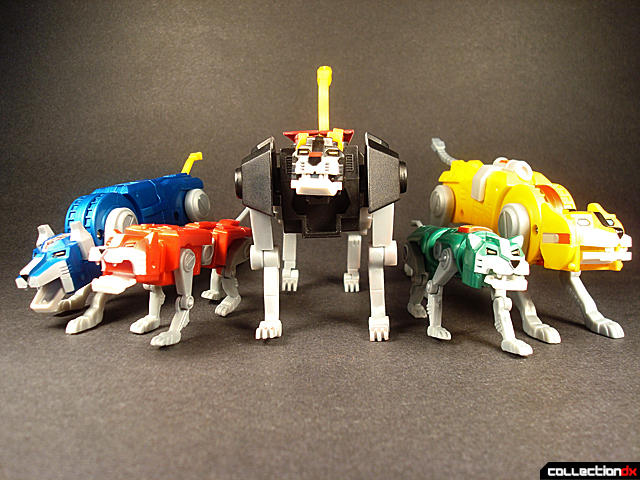 Number 1 is the ever popular Black Lion. 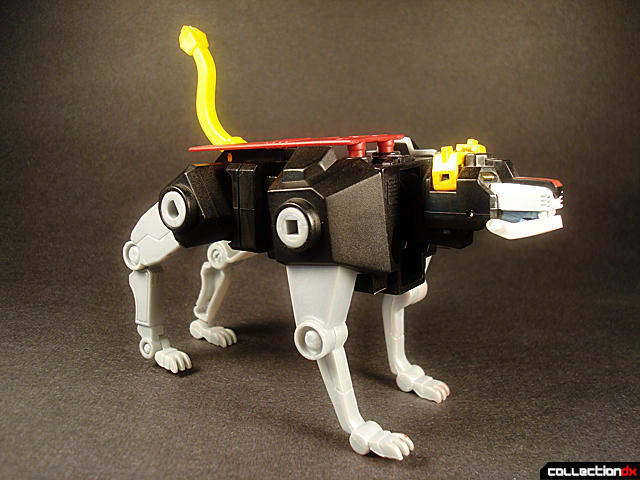 Number 2 and 3 are the Red and Green Lion. 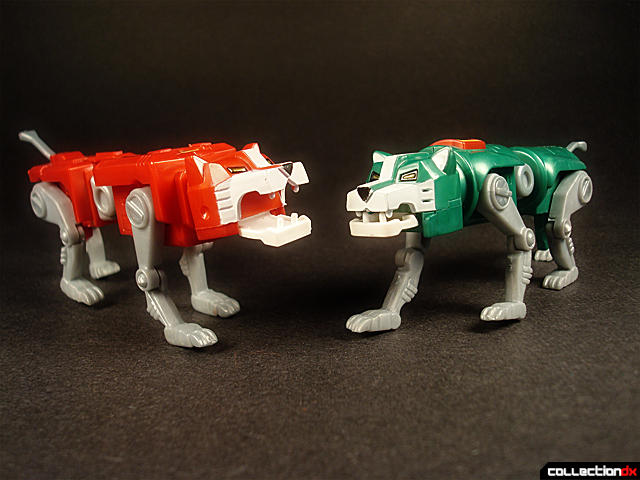 Number 4 is the Blue Lion. 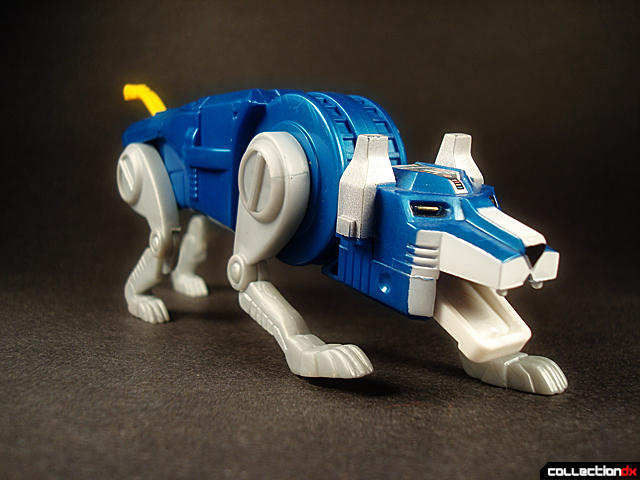 Number 5 is the Yellow Lion. 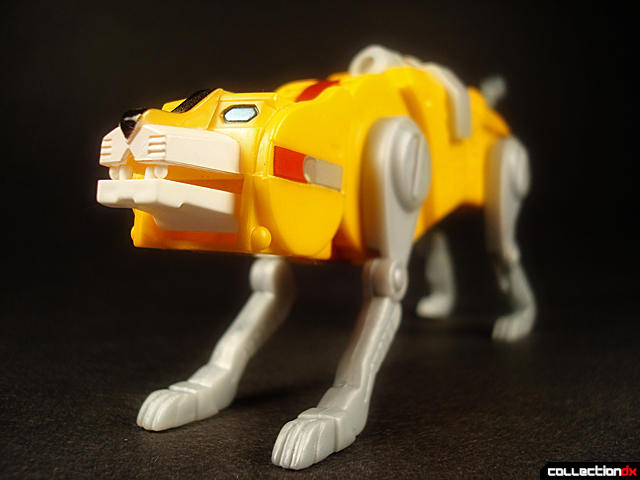 To give each lion a feeling of specialness, each lion has a holographic numbered sticker. 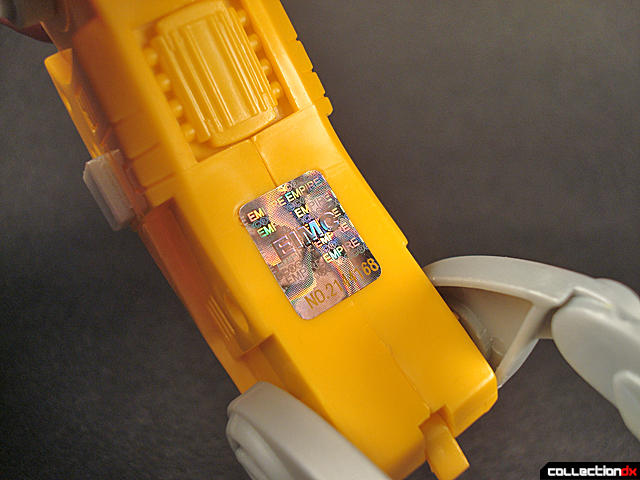 When combined together, they form Voltron. He stands about 9" tall so it's not small. Notice any resemblance to another toy? Yes, this seems to be directly designed off the Toynami Masterpiece Voltron. I wonder if Toynami had anything to do with this or if Jollibee just completely ripped of the sculpt. 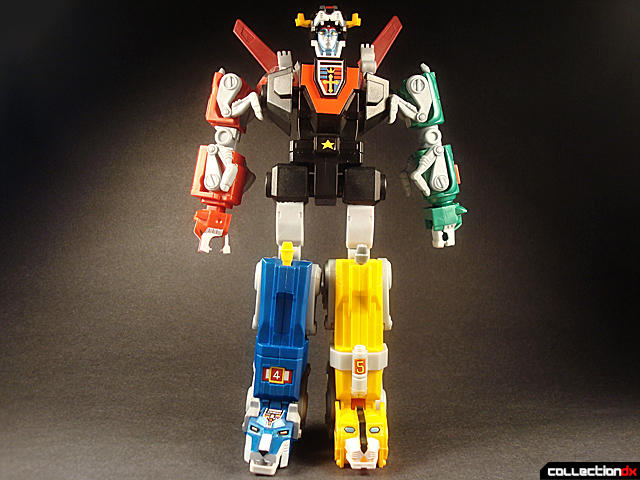 Even the head sculpt is very similar. 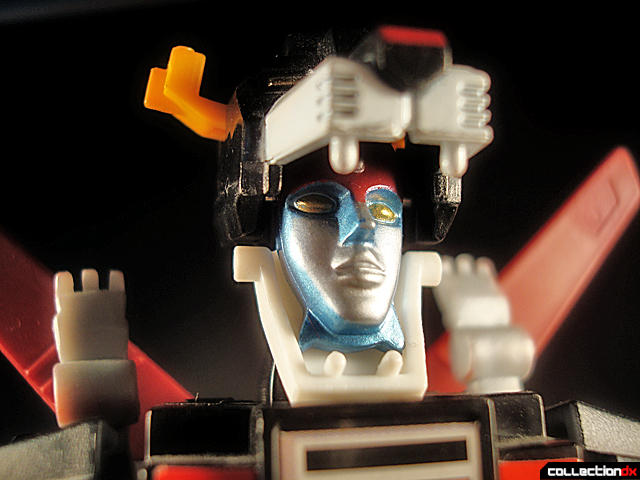 Even the neck articulation is the same at the base of the head and the base of where the neck meets the shoulders. 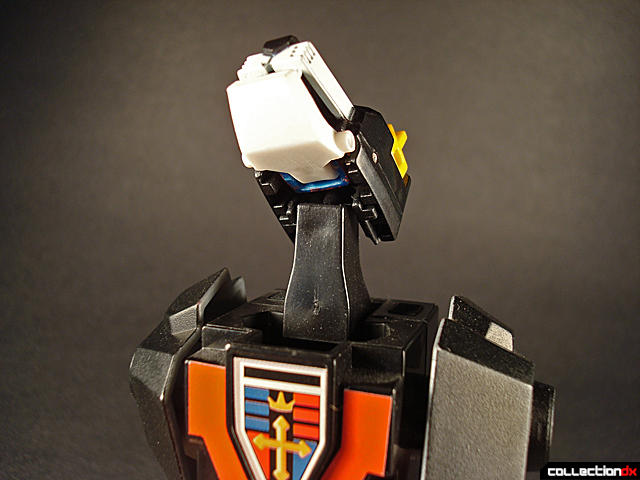 Another similarity is the way the arms join to the torso. Using the same tabs as the Masterpiece Voltron. Notice the Black Lion's front paws just hanging out top when transformed into Voltron. One of the compromises made. 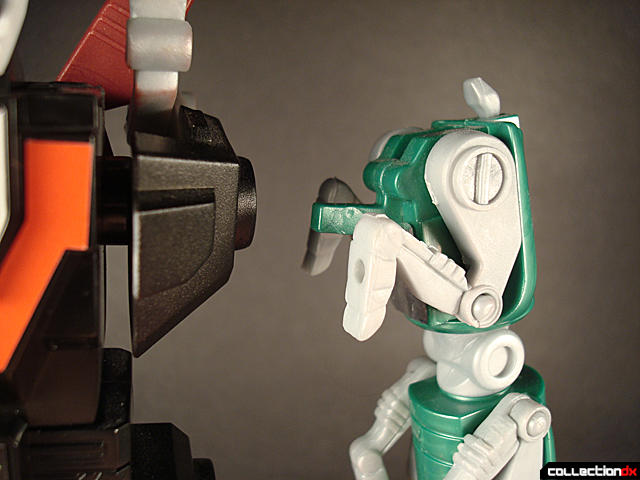 Even when attached it leaves a gap due to the poorly folding legs. I would like to point out that the connecting tab on my red lion was glued so I can't attach the red arm. 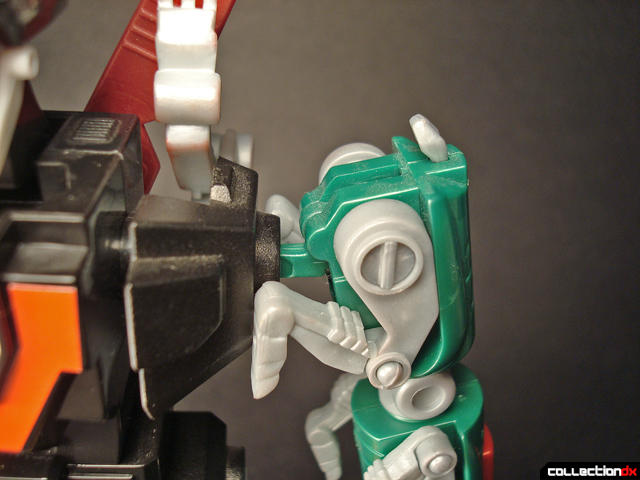 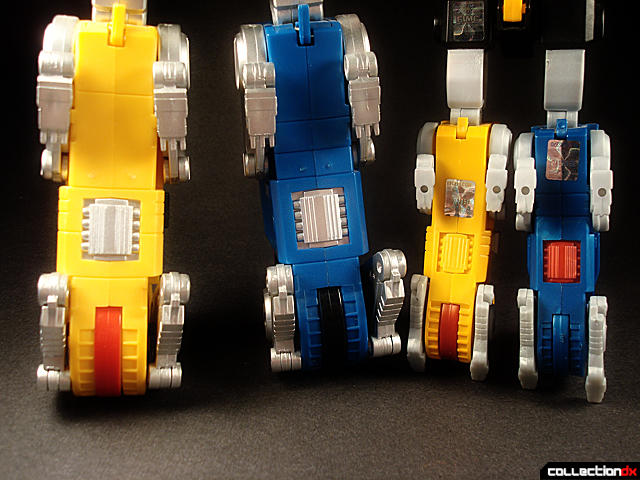 The similarities end when we start looking at all the little details. Obviously this toy has to sacrifice a lot to be able to be given away free in a kids meal. One cost cutting measure was making the legs hollow on one side. The paws are not articulated, so that limits the posing of the lions and makes the black lion paws stick out of the shoulders. 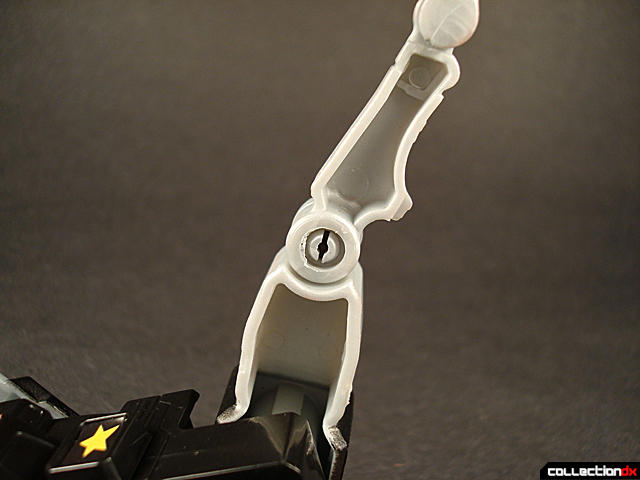 While each leg has attaches in the same way all Voltron have. The black lion legs clip onto small tabs on the yellow and blue lion. If you look closely, you will see where the the tab on the yellow lion grips onto the Black lion knee. Seems stable enough but after a few combinations, I'm sure the tab will wear off. 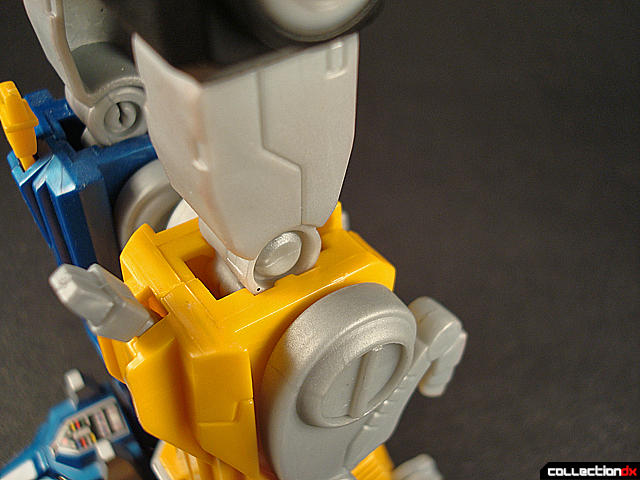 Here is a picture comparing the sizes of the mini kids meal version with the Toynami Masterpiece. 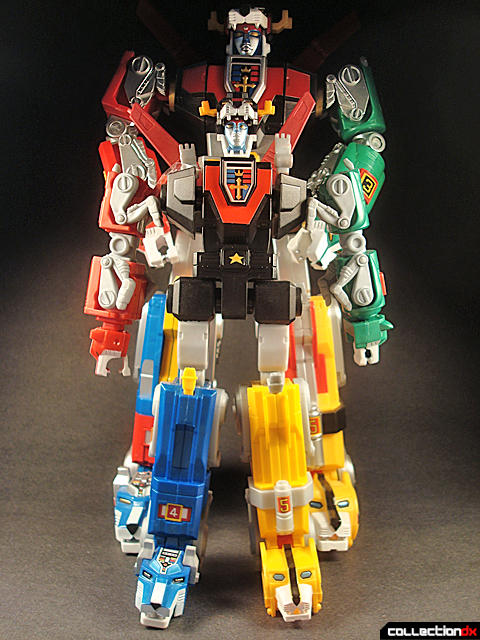 This figure is more appealing visually on a shelf than appealing during play. It doesn't seem like it would stay together during lengthy play. Not to say that it's going to break, but it's probably not going to stay together in the hands of a 5 year old kid. Also some small details had to be sacrificed- like paint apps and working elbows. They do swivel but do not bend. But hey its Voltron. Maybe with the new Voltron Force show we may get a chance at getting a version of Voltron when we buy a burger. But we're not going to buy a kids meal just for a toy are we?

17 comments posted
I need to kick myself in the

I need to kick myself in the ass and go look for one of those recent reissues of the original DX toy or the all-plastic MP Voltron someday; I always feel left out of that circle [in CDX] even though I never watched the show. I saw the original toy as a kid and wanted it, but I never had any chances to get one. Even today with the, umm- complexity?- of Super Sentai DX robos, I still want a Voltron.

Nice review and photos, chachi. Good call on spotting the similarities and putting the two side-by-side.

Looks good! I love these premiums and never heard of this one, Still a classic toy for any kid. I had some Gashapon lions from a vending machine when I was a kid but I could never score the black lion! I should still do a review and hopefully somebody might hook me up with the black lion.

Interesting piece. I'm going to look into this and see if anyone knows anything about it.

Please do, It would be interesting to find out some more history on this toy. Let me know what you find out.

I want a cool Happy Meal toy like this.

If restaurants did stuff like this in the US, it'd be a big hit. Even if it wasn't Voltron... But the idea that you have to buy 5 meals to complete the figure is awesome.

Way back when MicroMachines were getting their start, Wendy's had six (seven?) flying vehicles that could each hold a standard MM car, and then all the vehicles could combine into a super vehicle. Awesome idea, and I actually got one of them (though I really wanted the others too).

I would love to see a review of that. I don't remember seeing that back then. It could be something I forgot.

I don't know if I still have it. And even if I did, the box where it might be is buried. =\

This figure or set of figures was released by a fast food chain in the Philippines in 2008. It was a Jolibee kiddie meal offer that almost all adult collectors try to grab..(i know i have 2 of these). The black lion was the hardest to find because parents tend to buy it first and disregard the rest, Its kind of nifty for a kids meal..but sad to say sold out a bit to fast.

Jollibee didn't stop at Voltron. He's actually the second gestalt to come out of the pipeline in the Kids Meal toy offering. The honor of being the first goes to Power Rangers Dino Thunder. It also had the same cap cover / base feature AND they combine exactly like its DX brother.

Other releases (though no gestalts) were Macross / Robotech, Power Rangers Operation Overdrive and Gundam.

What were the Macross items?

That's Bad Ass just on principle alone. What an awesome give away toy.

The Macross toys in question:

- Veritech Guardian (Blue) - fires missiles, can transform into (semi) gerwalk mode by pulling down the legs
- Veritech Space Fighter (Red) - pull back and watch in "fly" (care off the wheels underneath)
- Veritech Battroid (White) - action figure comes with gun.

i live in the philippines but sadly, i was only grade 2 at that time and don't know yet who voltron is. I wish i could find one of those somewhere here.

You can try check out local ads sites. I remember seeing one somewhere.

Not sure about the condition of the toy though,

Chachi seems to have everything in pristine condition.

Just when you think you've seen all Voltron variants there's another.

Very cool. Now if I only knew where to find one.
Ill have to add this to the list with the mini lb.

Is there a video rewiew for this?