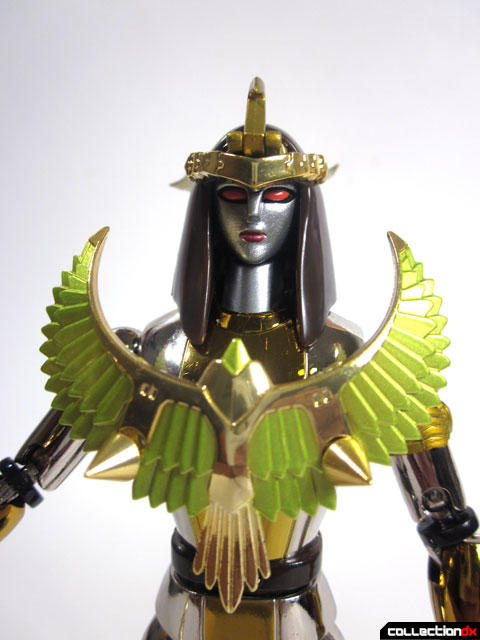 Having decided last year to seriously collect Soul of Chogokin figures I decided I wanted to get some of the rare pieces first or pieces that CollectionDX has not reviewed yet. 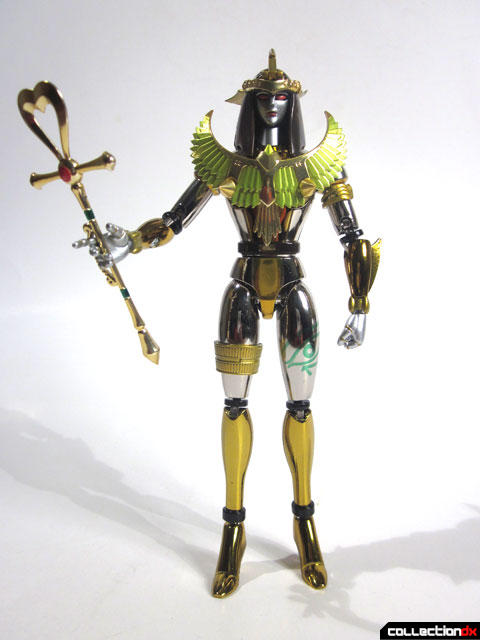 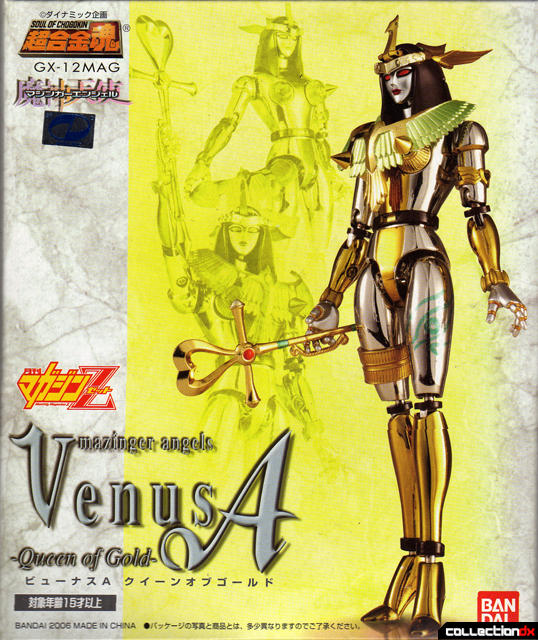 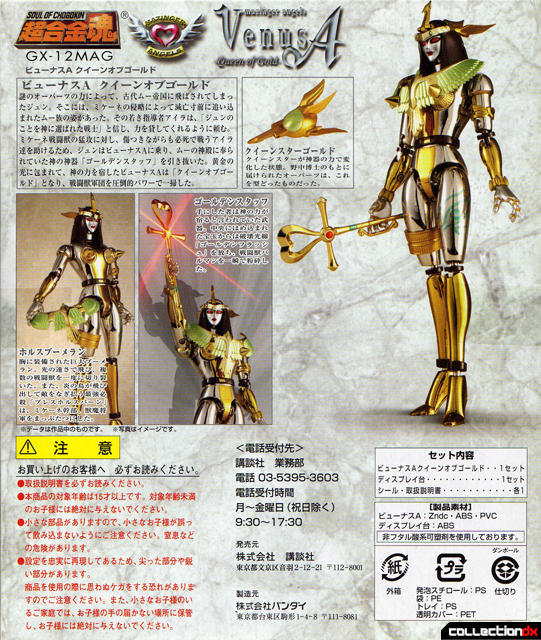 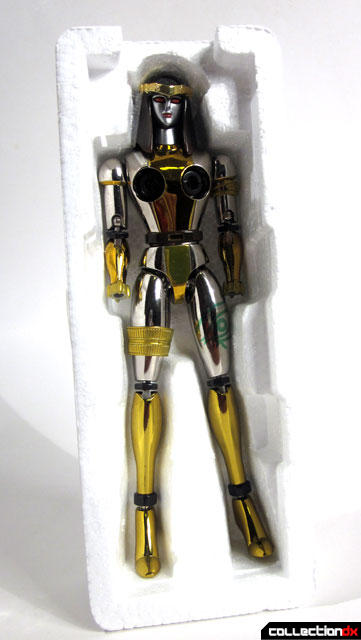 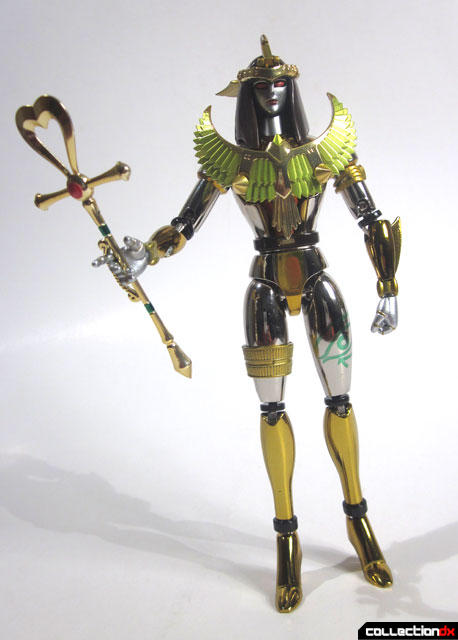 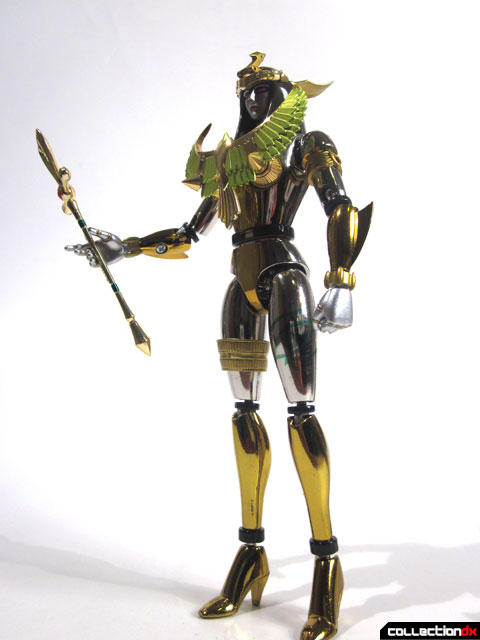 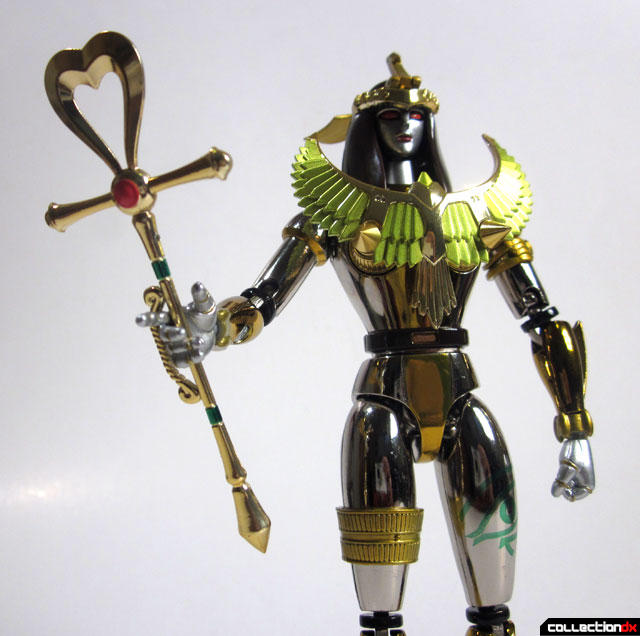 As previously stated I have been wanting this figure for a long time, all that gold and silver chrome and Venus A as a sexy Egyptian Goddess just had all the hallmarks of a great release. 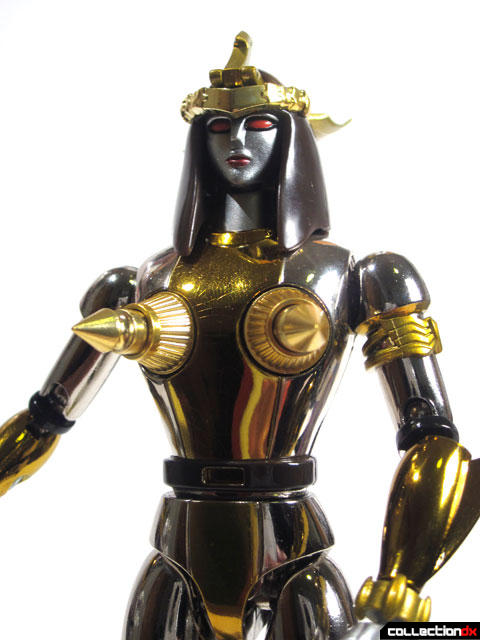 So it was disappointing that when I opened up the sealed brand new box that the gold paint on the chest was crazed and cracked. The chrome throughout the figure also was not polished out correctly or the finish dried rough. I have seen many SOC gold and chrome releases and usually the finish is flawless. Accordingly the figure appears much more dull than it could be which was a huge let down. Again, just because something is sealed in a box C-10 left untouched and blessed by the Pope does not mean there is a mint toy in the box. All it means is you have a nice looking box. 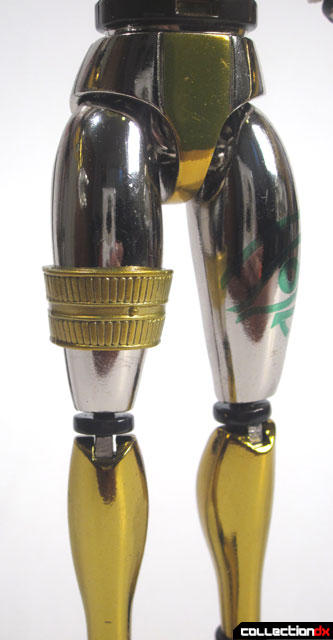 After the initial let down of the finish I was impressed with the overall design of the figure. Besides Minerva X’s premiums I believe that Queen Of Gold is one of the best realized of the series. I like the arm and leg band jewelry and the color choices were well thought out. The face and bird motif details are also well rendered.

Assembly is strait forward. Snap in the fists or use the open finger hands if you want to attach the staff to the hand. I never liked the designed of these Mazinger Angles hands as they are a hand with a ball on the tip that snaps into the wrist. Over time that rubber ball is going to break at the joint so I suggest picking the two hands you want to use and keeping them on the figure. 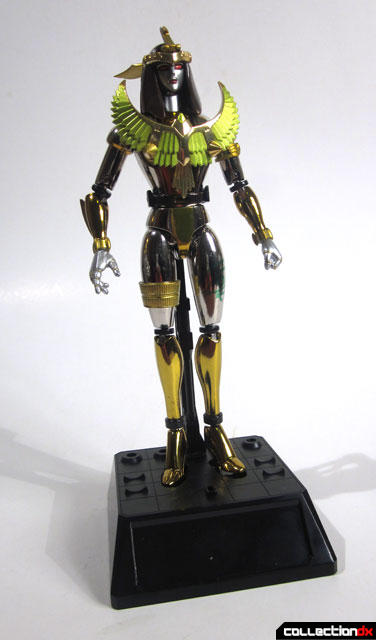 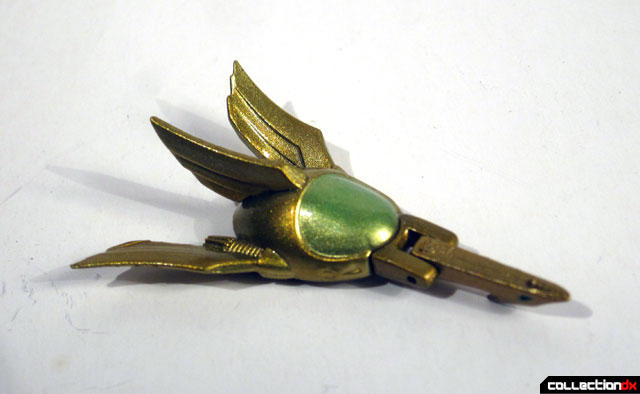 The breast missiles snap into the chest and the bird motif snaps onto the tips of the breast missiles. Careful not to shoot your eye out, as the parts are pointy sharp! The Venus A rubber jet is shaped like a bird, with the head of the bird pivoting back to look like a swan when put into the head. The wing was slightly warped due to settling in the package but can easily be bent back into shape under hot water. I do like the shape of the jet as it elegantly fits with the overall theme of Queen Of Gold. 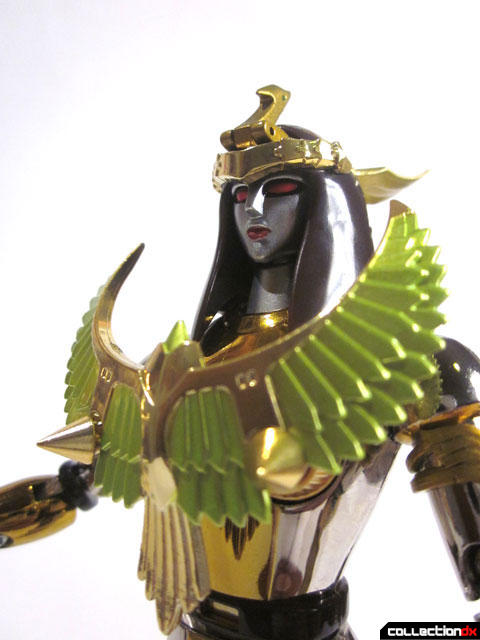 The paint details of the Bird motif are beautiful and actually look like they might glow under a black light. 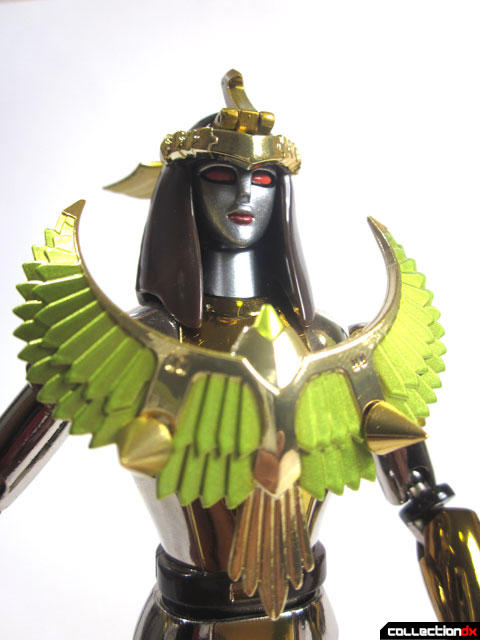 Standing back it is one of the best releases in the entire Soul of Chogokin line but sadly my example is below quality and I am not sure if they are all like this or not. If you have a chance to purchase one make sure you check out the finish before you lay down your hard earned Yen. I am definitely glad I picked up this rare piece for my SOC collection but being under finished I am a bit put back by the quality especially knowing this piece could glow with beauty.

5 comments posted
Though your finish may be

Though your finish may be dull, your review is a precious scroll in this Library of Alexandria of Toys. I'm curious about the other mazinger angels now.

Awesome review, I for one am glad Collection DX is taking some time to review some old rare items such as this. Personally i had no idea this beauty existed and I'll definatly keep an eye open for it if i happen to find one. I like to collect rare items and I'm still on the look out for a 1st edition 1969 Mazinger Z. I've found a few here and there but since it's become so rare people are offering it for 500+ $. Original price is around 250 $.

Great review. Great figure. I pre ordered this one from day 1.

I have since gotten rid of all my Maz Angels but she is spectacular. She is posing confidently next to the Black Reideen SOC. I think they're dating. Standing together it's as though they were made for each other. :D

The finish is still intact on mine. Sorry to hear about yours. Dunno what that could be from. The problem with mine is the boobs pop out at the slightest touch. Normally this would be ideal with real women but kind of annoying on this figure.

Bittersweet review. Sorry you got a poor example.

The Maz Angels are indeed gorgeous. I've always wanted to add a couple to my collection, but they've been pricey from day one. I've seen a few up close in others' collections, and they've been striking. I don't recall any of the finish problems you noted, but this was a while back, and I didn't get to handle them.

You unfortunately learned the MISB lessons the hard way. Just because it's "Mint In A Sealed Box" doesn't mean what's inside is mint, or even "new" inside. Years of collecting vintage boxed Star Wars items will teach you this pretty quick. I've bought tons of sealed boxes only to find styrofoam rotted, or Takara chrome flaking off weapons, of the worst, Godaikin Styrofoam rot, which is near impossible to clean, and completely impossible to tell in 1st series windowless boxes.

I actually no longer buy anything MISB, as I'm going to open it anyway, and you can save 25% or more off of retail by buying a used or opened SOC. I just make sure it's got a box in decent shape. The price just plummets for new but opened SOCs, which is good for collectors, bad for re-sellers. After I bought (what I thought) was a MISB Go-Lion last year to open it and find styrofoam stains and discoloration, I'm finished buying MISB without window-boxes.

I've seen this particular Venus go as high as $300, and recently as low as $30 shipped. The Angels are pretty all over the place price wise, I'd say anyone interested should do a little research on Y!J and eBay, and see what they go for. As with all SOC, remember, if it's super rare, then there won't be 5-10 of them up there, no matter what the price. Sellers play with the prices so be careful not to pay hundreds more for something just because there hasn't been one up for sale for a few weeks.