Each WALL•E unit is a small trash compactor programmed to search out solid garbage, collect it within itself, and compress it into more-manageable trash cubes for later pick-up by other dedicated robots. In addition to the two small three-fingered hydraulic manipulators on either side of its chassis, each has a small laser cutting torch built in between their optical sensors on the sensor pod above which can cut larger garbage into smaller and easier-to-handle chunks for them to process. They roll on two tractor-tread assemblies and are able to climb difficult natural & artificial terrain such as stairs & junk heaps with the sophisticated traction & suspension within them. To make certain that they too do not contribute to the mess they are trying to clear, all WALL•E units use solar energy as their primary power source. When recharging, during difficult weather patterns, or in storage, each unit can retract the sensor pod, manipulators, and tractor-tread assemblies into the hollow interior to make a compact cube shape. 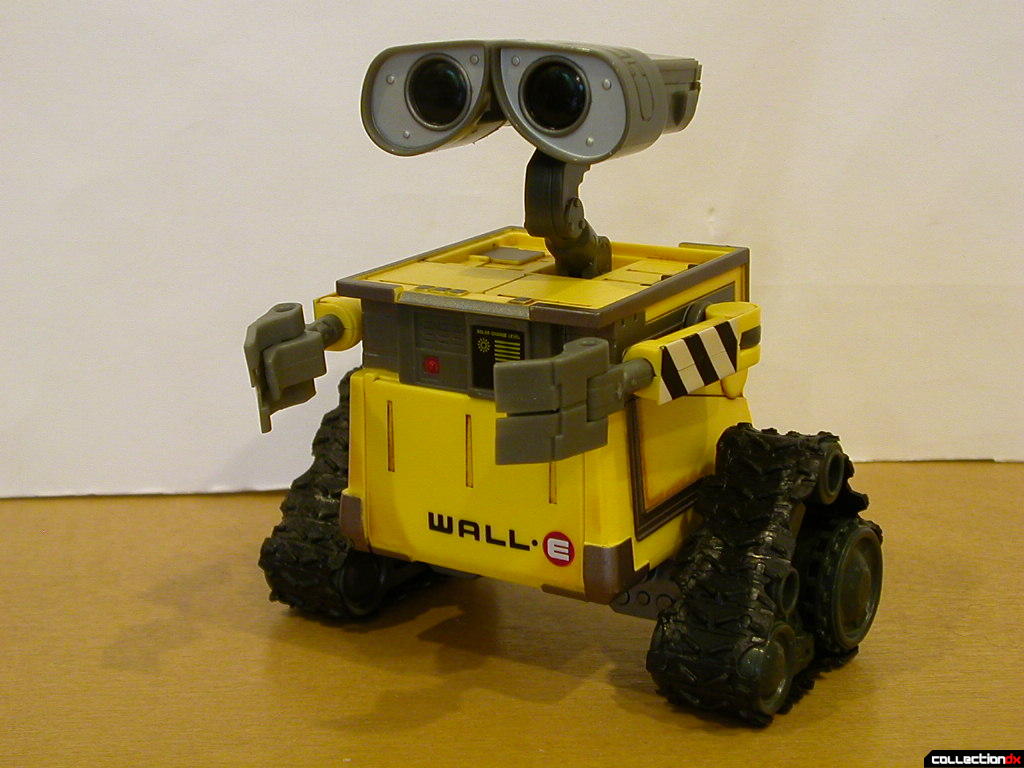 U-Repair WALL•E (back) stands 3 15/16” (10.2cm)-tall when all of the accessory parts have been added, and is designed around the story element from the summer 2008 movie that this particular unit tried to keep itself functional by swapping parts from its broken brethren ‘bots. The set contains 20 parts which come pre-assembled in the packaging, but serve as the main gimmick of this particular toy. The separate components are:

The only duplicate parts are the tractor-tread belts- one pair are worn from use and look ragged, while the other pair look factory-fresh & undamaged. Since the two pairs of belts are symmetrical when slipped onto the tractor assemblies, it doesn’t matter which goes on which side. And, because WALL•E’s yellow ABS body is hollow, whichever pair of belts is not in use can be stored internally, keeping the set complete.

With the exception of the head-to-neck joint (which is a ball-&-socket) and the tractor-tread belts, all of the U-Repair WALL•E parts are snap-fit. Indeed, if you wish, you can even swap most of the components into kooky combinations! The only exception to this is that the tractor assemblies cannot snap onto anything other than the leg attachment parts; this is because the assemblies’ joints have tiny unique bars which prevent them from snapping onto anything else. However, the leg attachment parts themselves are still fully versatile in merging with the other components of the set. Though they can be separated, the two fingers on each hand are not meant to be removed, even though if too much pressure is applied they will pop-off. The control panel on the front of WALL•E’s chassis above the front storage compartment door can be removed, but Thinkway Toys incorporated a small tab-&-slot design on the inside which prevents you from installing it upside-down.

Since there is not nearly enough room or mechanics involved in this toy, WALL•E cannot store all of its parts inside of itself like it does in the movie, so simply removing most of them is sufficient to resemble its compacted storage form (back). (Yeah- you can store some of the smaller separated parts inside of him, but that space is obviously normally reserved just for whichever spare set of tractor-tread belts is not in use.) In storage form, its almost-cube-shaped body is 2 ½” (6.5cm) on its longest axis [front-to-back]. The similar-sized Transforming WALL•E action figure set, however, is specifically designed to fit all of the parts into it without separating them by means of spring-loaded internal mechanisms.

The plastic lenses for its eyes are indeed transparent, but inside of them is black plastic, so you can’t see what’s really in there even though they reflect light well enough. Though the panels on the top of its eye camera sensor parts which resemble eyebrows, they are molded in and do not move as in the movie. On the back of its head is a single black PVC part resembling cables going into its eye cameras; these cannot be removed but the material is flexible so that its eyes can still tilt up-&-down. All six sides of its yellow body have panels painted gray, and lines highlighted. Of particular interest is the fact that all fully-exposed yellow surfaces have weathered brown paint applications added to them to give WALL•E that worn, rusted, grungy, & beat-up appearance it has throughout most of the film. This applies just to the body and upper arms; no other surface has been weathered; and all plastic molds have not been altered- save one set of tractor-tread belts- to look worn either. The tractor assemblies do not extend or contract like they do in the movie; being molded into single parts. However, three of the wheels on each do freely rotate, with the fourth for decoration only. On both sides of the two largest wheels on the tractor assemblies, and on the back storage compartment door, is the logo for the fictitious Buy n Large corporation (abbreviated as “BnL”).

Other extra printed details include the control panel display which shows his “Solar Charge Level” [at full capacity], the official “WALL•E” label on the lower left corner of the front storage compartment door, and the black-&-white caution stripes on both upper arms. And, with the exception of the outside panels around the eye camera lenses, all other surfaces of the toy are unpainted.

Poseability for the U-Repair WALL•E set is fairly good. All of those snap twist-joints in the wrists, shoulders, and neck allow for a good range of motion, and there are additional alternate joints in the larger two fingers on each hand (they are molded together as one piece), a second shoulder joint beyond just the connecting peg, and a horizontal rod between the eyes which allow them to swivel up and down. The shoulder joints in the movie run along an angular “J”-shaped track on each side, allowing it to reach farther, or retract the arms. Here, the shoulders snap into just one hole located about mid-way along the upper horizontal track; unlike the larger electronic motorized InterAction WALL•E toy, the shoulders cannot be repositioned anywhere else since there is only one hole on each side along the non-functional track. WALL•E’s rather expressive binocular-shaped eye cameras can swing up and down just a little, but because the black plastic cord on the back of his head is actually rather inflexible, they always droop when left alone, so it always has a rather mournful expression. Unlike in the movie and several other toys, U-Repair WALL•E’s lower arms cannot telescope in and out, and so they stay at that one length all the time- the wrists just barely stretching beyond its body when the arms are pointed straight forward. Both tractor-tread belts- which are made of a flexible yet non-stretching material unlike rubber- can freely turn, allowing it to roll. (Those belts are tight enough that it doesn’t roll very easily, so you have to push down on it a bit to get them to spin. And even then, sometimes the inner wheels won’t turn, and the belts will just slide right around them. Don’t even try pushing it around on hard wood flooring- it’ll slip around like it’s on ice; it works best on short carpet.)

Having not actually seen “WALL•E” in theaters by the time this review was posted, I had to do my best to avoid spoilers for myself until it came out on DVD later in 2008. However, seeing the various trailers & reviews online allowed me to glimpse the tiny R2-D2-wannabe, it was inevitable that I would come across the character enough to become interested. And really, this is the only figure I found that I really wanted. The biggest reason was the ability to disassemble him to resemble its storage form, and that they provided a worn pair of tractor-tread belts to swap out. I did, however, see another figure that you could disassemble, Construct-A-Bot WALL•E, but I kept a good distance away from that one because it used magnets to keep the parts together, not snapping joints, so I knew it would never stay together after the first time I dropped a single part! Though this figure was the same size as ones that didn’t come apart, and instead came with trash cubes, I decided that I didn’t need the trash cubes to like the figure. While I was a little disappointed that the arms couldn’t telescope, the two larger fingers on each hand were molded together, and that it couldn’t reach far beyond its chest, I still find this a very satisfying representation. But, I wasn’t willing to spend over $30 for features like motorized rolling around and voice-activated features that- as an older collector- I would not have used much later on. Things to change? Other than those disappointments listed above, not really. I might, however, tighten those connection joints just a hair, though… The U-Repair WALL•E set is cute (little robots with squat bodies and big eyes usually are), practical, sufficiently gimmicky, and certainly a good representation of the character physically from the movie. And so I highly recommend getting the little trash-bot!

See the commercial for U-Repair WALL•E by Thinkway Toys!

Even though the figure can be separated into 20 parts, I would strongly recommend that you do not disconnect the ball-&-socket head/neck joint, or the two compartment doors. There are small joints in all three cases, and I'm afraid that if a kid is too careless with them, they'll break when being taken off or put back on!

If I'd had my 26yr-old head screwed on straight, I'd've posted this today on my birthday as a present to y'all rather than yesterday. Or maybe a Super Sentai review, or another Transformer...

First of all, Happy Birthday EVA_Unit_4A!

About the toy, nice review. I'm not so much a fan of the Wall-E design, but it's possible I might get into it more eventually; I hear the movie is awesome, so maybe it will change my mind.

Not as smart though little Wall-e, But fast and the harder working robot for sure. I just can't get past how similar to Short Circuit he is. Except color!
Those locals kick your face into outer space! hehe
Great little toy must say and nice price.

Actually, because I've never seen "Short Circuit" before- or it's been so long since I saw it- I forgot to mention that similarity.

Something else that I don't think I stressed enough was that there's another figure out there that you can disassemble- Construct-A-Bot WALL-E. That one was held together by magnets at all the joints, and I steered clear of it because of that. the tractor-treads, also, couldn't be taken apart, and instead had little gray wheels underneath rather than rubber treads. It's nearly identical in shape and size to U-Repair here, and there's a companion Construct-A-Bot EVE figure as well that's made along the same lines.

Speaking of companion, I found a few more figures that I'm interested in getting-

I'm shooting for the EVE figure now, but I need to do some more research on the M-O figure before I commit.