Total Eclipse gave the Muv-Luv series a good chance to expand on the setting's arsenal of Tactical Surface Fighters. While the Soviet Union was mentioned several times during Alternative, it wouldn't be until this spinoff that the major player in real life air power would see their famous fighters re-imagined as sweet robots.

I previously reviewed the Revoltech version of the Su-37 Terminator in the Scarlet Twins colors and decided to check out the equivalent A3 toy in the striking blue variant. 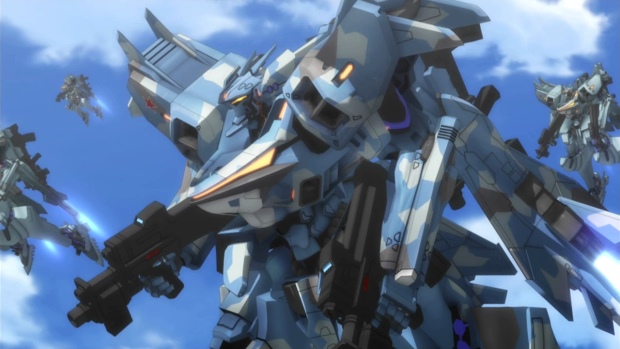 The Su-37M2 is the personal use TSF of Lieutenant Colonel Fikatsia Latrova who is the commanding officer of the Zhar Battalion. Her subordinates use the Su-27 Zhuravlik.

Please check out my video review which also features the Su-27 figure. 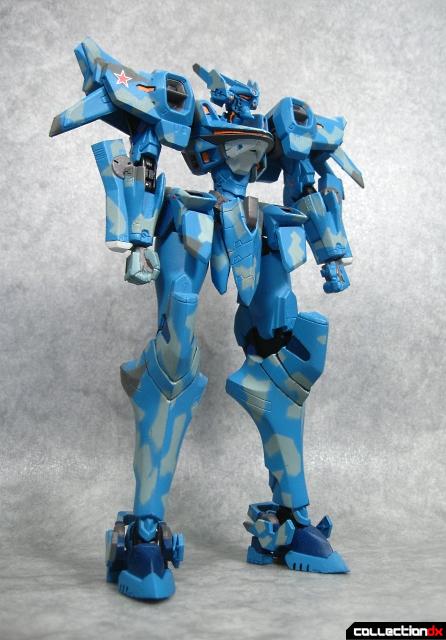 The Su-37M2 released in 2008 as a limited edition figure. It is a repaint of the normal retail Su-37UB and trades the purple base color for a more authentic Soviet sky blue. The figure stands about six and a half inches tall and is a mostly PVC plastic toy. I find the thickness of design makes the Terminator a substantial figure with a good sense of presence. 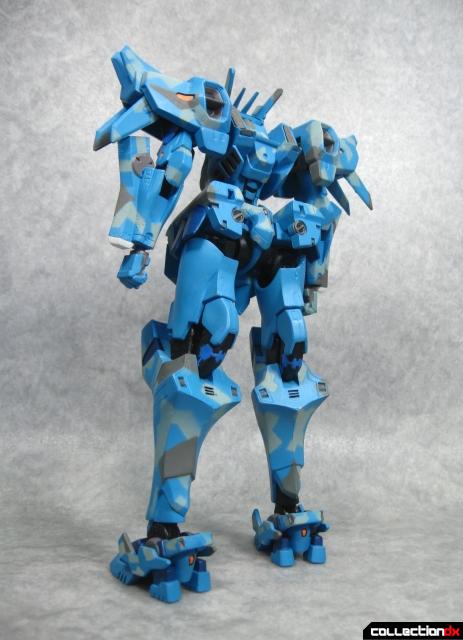 From front to back all the camouflage patterns are cleanly applied. This version of the Terminator is easily one of the most attractive Muv-Luv toys in my collection with the blue giving it that authentic military aviation feel. 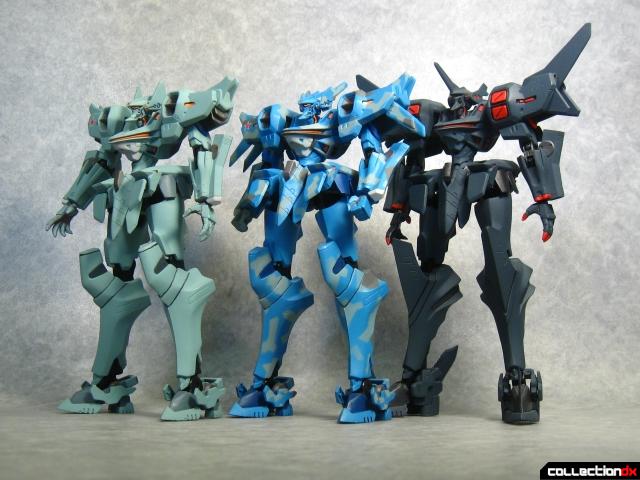 Volks produced all three members of the Sufoni (a play on "Sukhoi") family for the A3 line. From left to right are the Su-27 Zhuravlik, the Su-37M2 Terminator, and the always ominous looking Su-47E Berkut which I reviewed here. All together they show a neat lineage that shows the base design getting more elaborate with each variant to the point where the Berkut is basically an all new sculpt. 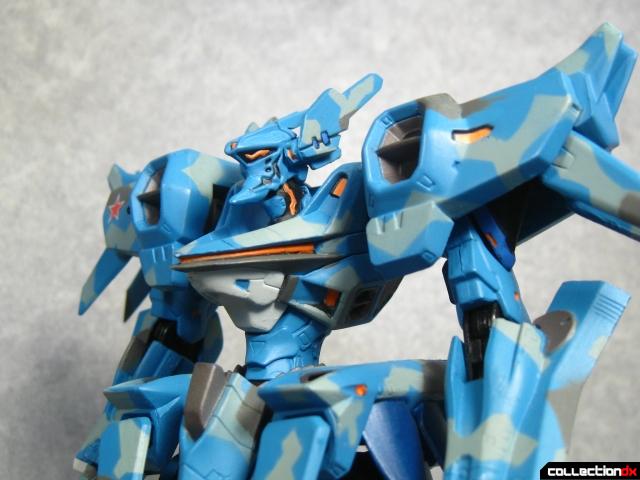 The detailing on the Terminator is quite good overall with the small orange sensors creating a cool contrast to the base colors. 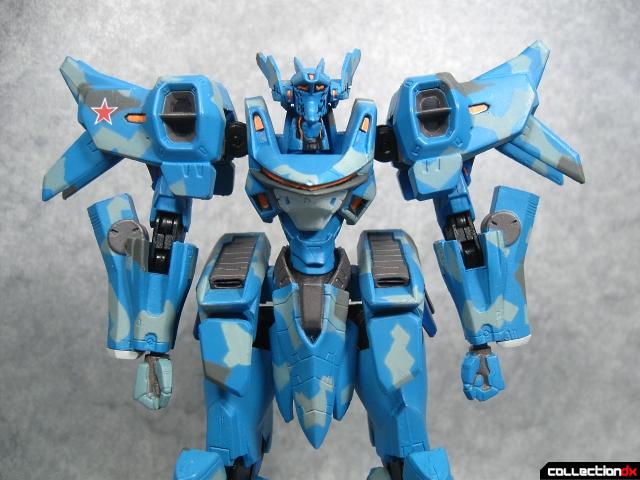 On its right shoulder is the iconic Soviet star. 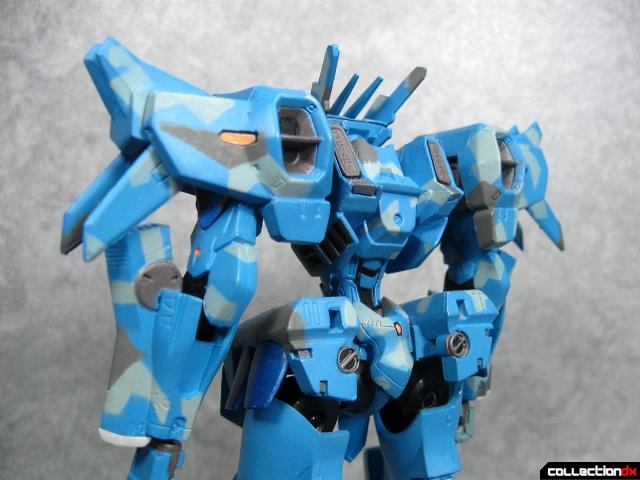 Notable differences from the Su-27 include redesigned shoulder armor with large blade fins jutting out from the bottom and extra vents on the sides of the torso. 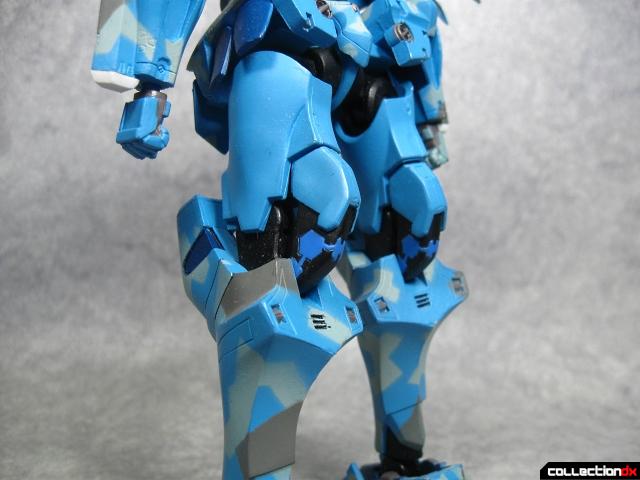 The Terminator has the same optional knee filler parts as its kin. Each piece is plugged into the thighs via a peg and must be pulled downward for removal. 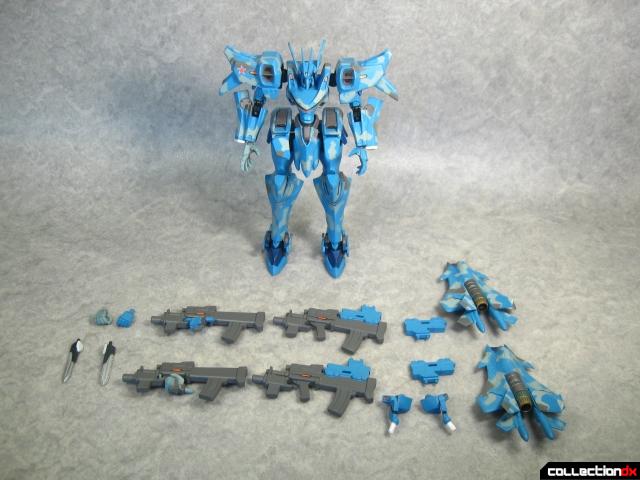 For accessories the Su-37M2 comes with the usual spread of cannons, hands, and melee weapons. Note that all of the right hands are colored light greenish gray to match the camouflage. 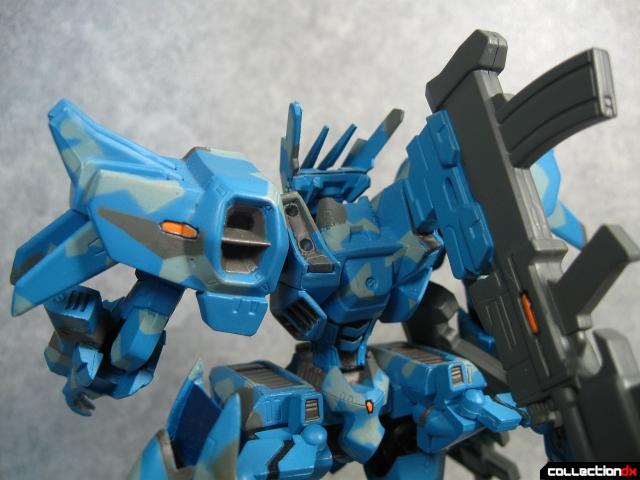 Both the bare and assault cannon loaded mount pylons attach to the main body via a pair of holes hidden under a removable cover. On my Berkut this setup was so loose neither type of accessory stayed in place so I never bothered with it. The Terminator on other hand has the opposite problem where the topmost and thickest peg sits in the hole very tightly. Use caution when handling these accessories. 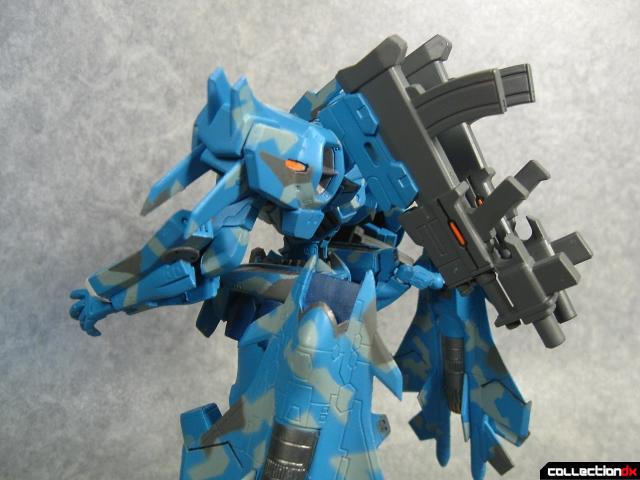 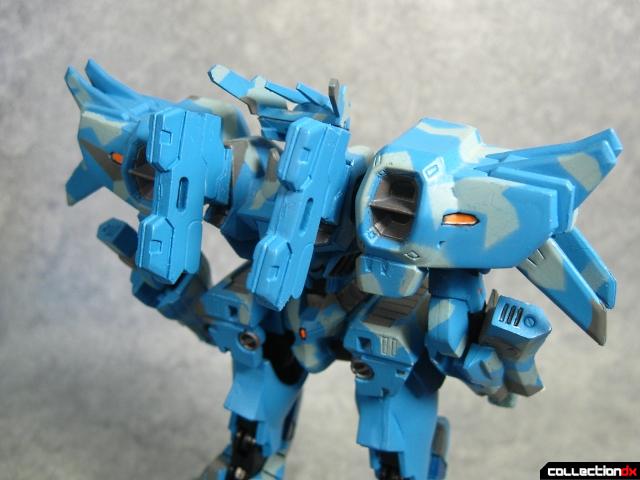 And the bare pylons stay on quite securely. I find the tininess of the pegs makes me leery of them breaking off if the figure were to fall on its back. This area is very narrow so I can understand why Volks went with this two hole setup rather than the single peg like of the other figures but I find it to be more concerning than it should be. 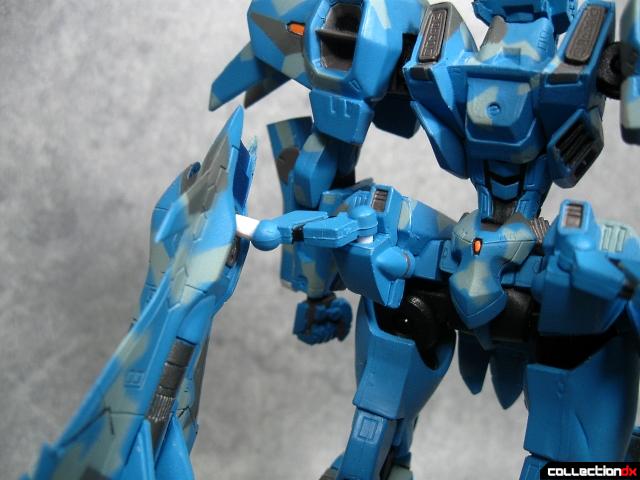 The Terminator's large jump units tab into the skirts rather loosely and tend to pop off during posing. I would recommend either thickening the pegs until they stay or just gluing the mounts in permanently. The jump units move around of a pair of swivel joints. 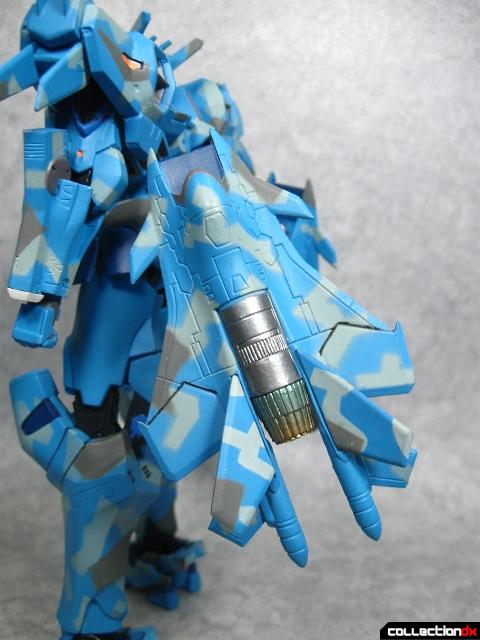 All of the camo patterns continue on the jump units. The signature "burnt metal" finish on the jet exhausts is also present. As these bits are rather large, the Su-37M2 is somewhat back heavy and needs to be posed with this quirk in mind. 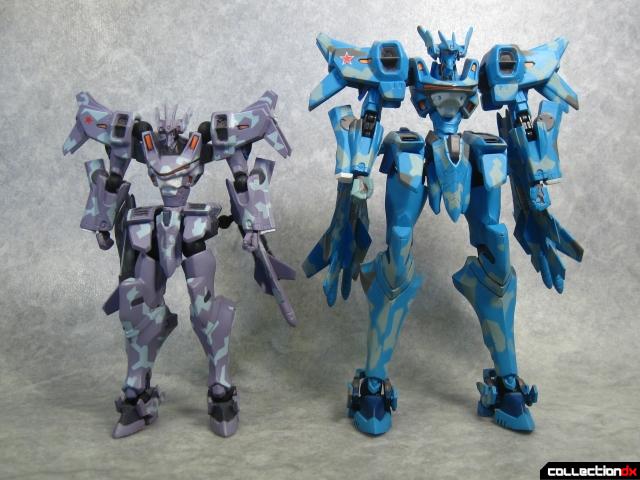 Here is the Revoltech Su-37 with the A3 figure. The former has a much more aggressive sculpting style that does not look as good as the Volks toy when both are in more neutral stances. However the smaller figure is vastly more fun to pose. Both Kaiyodo and Volks covered the blue and purple variants in their respective toy lines. 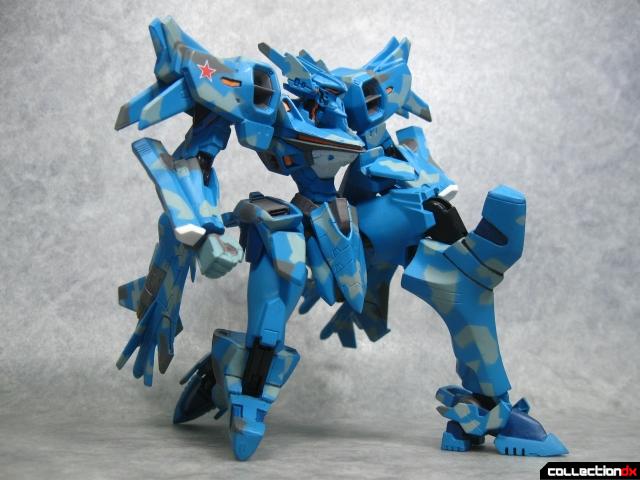 Now the A3 figure is no slouch in the articulation department but it is more limited by its resin kit style construction. The clicky A-Locks joints allow for a good range of motion combined the rigidity to hold a pose. The biggest impediment to moving the Terminator about is how the skirts plug into the hips via a squared off peg that cannot rotate easily. For doing something like a kneeling pose you must first remove the skirts, pose the legs, and the reattach the skirts at the desired angle. 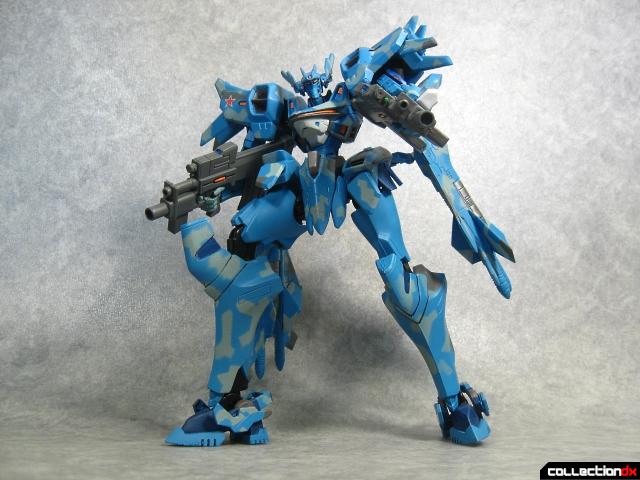 Again while it's not the most dynamic figure, the Su-37M2 still effects the look of a powerful war machine. 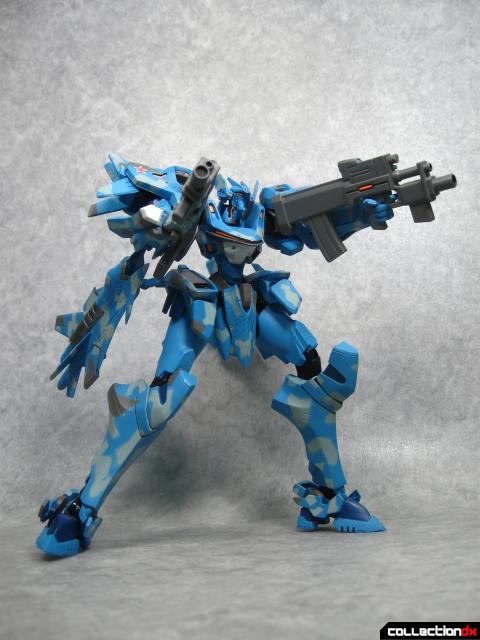 It can dual wield assault cannons as well as any of the others. 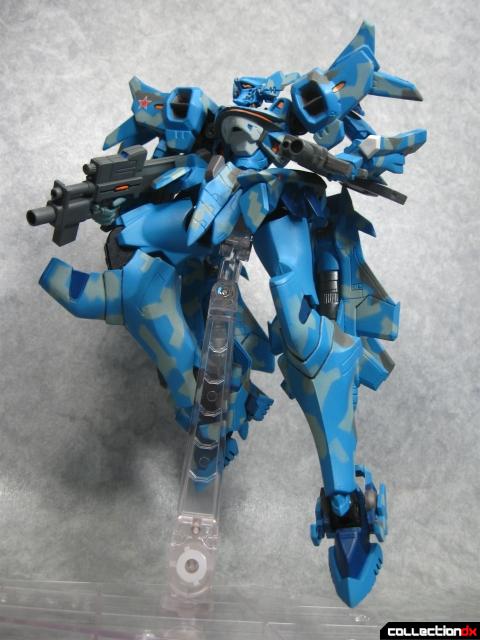 While A3 figures are from a time before display stands were a common accessory, I find a Tamashii Stage Act 5 works well with them. 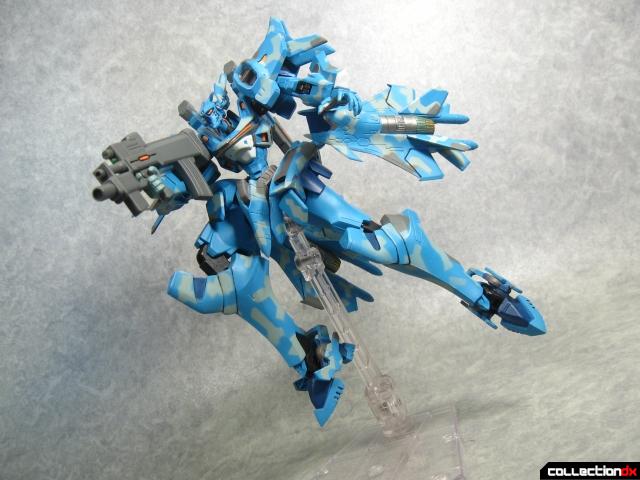 With some work, you can create a flying while strafing pose. 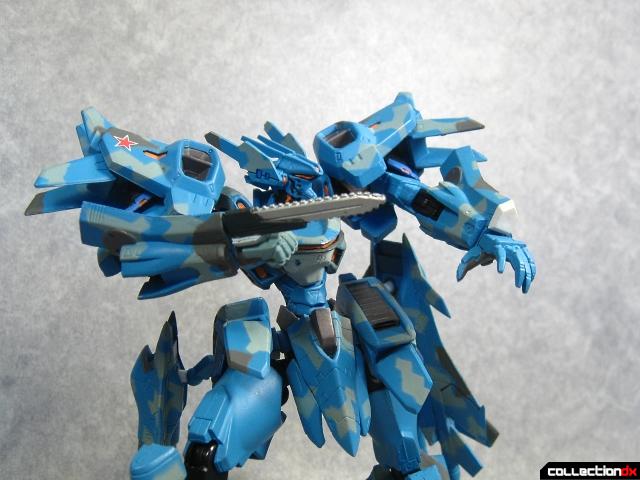 The Soviet Union's favorite visceral melee weapon is accounted for on this figure. You can replace the white forearm piece with an extended chainsaw. Getting the small cover off can be tricky as it is firmly pegged into the arm. 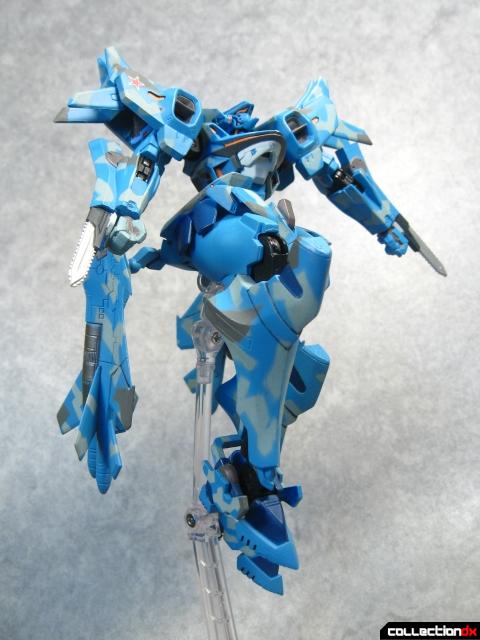 Some birds are majestic in flight even while wielding dual whirling blades of death... 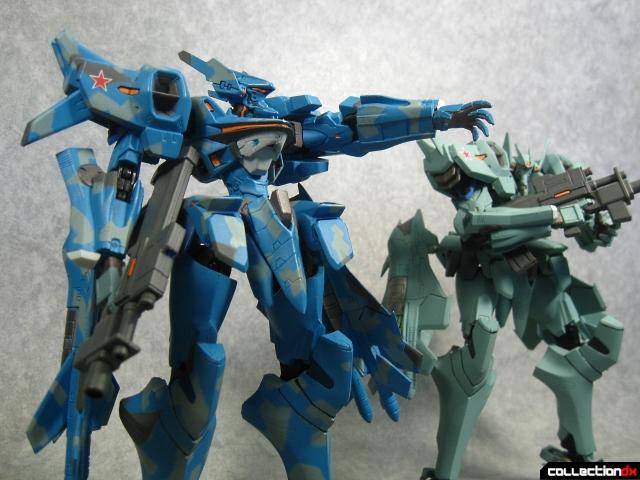 The Soviet Union fights bravely on the front lines of the BETA invasion. 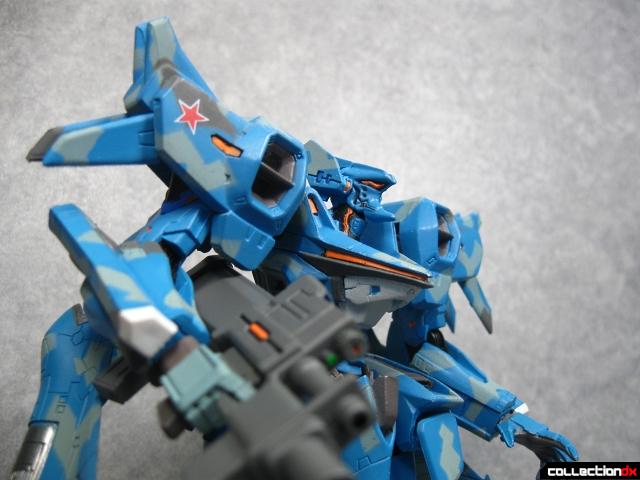 Even in a time of war, Mother Russia watches over her people.

The A3 version of the Su-37 Terminator is a no frills action figure that works well as a display piece. It lacks the dynamism of later entries like the MiG-29 Lastochka or the F-16 Fighting Falcon but makes up for this with sheer style and presence. If you are looking to acquire one of these on the secondary market, be advised that the blue M2 version is hard to come by and usually goes for 4,000 yen and up. The purple UB version is generally easier to get at a good price. For those looking for a more playable toy of this design, I would recommend the Revoltech figure as even the Hobby Stock exclusive blue variant is easy to find on the aftermarket. Kotobukiya also made a large non-scale model of the Su-37UB. For me the Volks toy is a neat curiosity and another proud member of my A3 army.

3 comments posted
I don't see it

I've read all of your Muv Luv figure reviews over the past few years (thank you!), and while I appreciate the originality of the designs, there's something that never quite clicks: the aircraft references. I feel like, almost without exception, the only way these mecha reference the aircraft that supposedly inspire them are in the jump units (which typically just look like half of the actual plane worn as an ornament) and - sometimes - in the paint schemes. It's like, I could really get into them as stand-alone designs, but instead they insist on doing a "crossover" gimmick in the most half-assed way possible, and it completely turns me off.
Am I missing some aspect of it? Is my prejudice senseless?
Teach me to luv Muv Luv, veef!

If I may answer on Veef's behalf, in Muv Luv aliens called BETA invaded in the late 60's. Their ability to shoot anything flying out of the sky soon made jet fighters obsolete. Instead, "Tactical Surface Fighters", aka giant mechs were created to defeat the BETA. Because they replaced jet fighters these Tactical Surface Fighters took the names of what are jet fighters in our world. They also often share the same characteristics as their real world jet counterparts. For example, the F-4 TSF, is big, bulky, and well armored, like the real world jet. The F-22 TSF is fast and stealthy and invisible to radar like the real world jet, allowing it to run circles around any other TSF. In effect, each TSF has all the in story characteristics of the real world jet it's named after.The only exception are the Japanese made TSFs, which are all new designs since in Muv Luv world Japan was allowed to keep their military while in our world they officially were not and have to buy American planes instead.

Thanks for the info. If the TSFs resemble their namesakes in general role, capabilities, and other aspects not readily apparent in the visual designs, that does help me appreciate it better. It still feels like a missed opportunity to make mecha that more creatively incorporated the appearance of the fighters that inspired them, but that's more me wishing for a different approach than my previous feeling that the series was just doing a certain approach badly.