Asuka Langley was the Second Child and piloted Evangelion Unit 02. At only 14 years old, she was a moody child, prone to temper tantrums and fits of rage. But there is no denying that she was a great pilot. Asuka's story is long and complicated, much like the whole of the Evangelion saga. To find out more, feel free to read this Wikipedia entry. 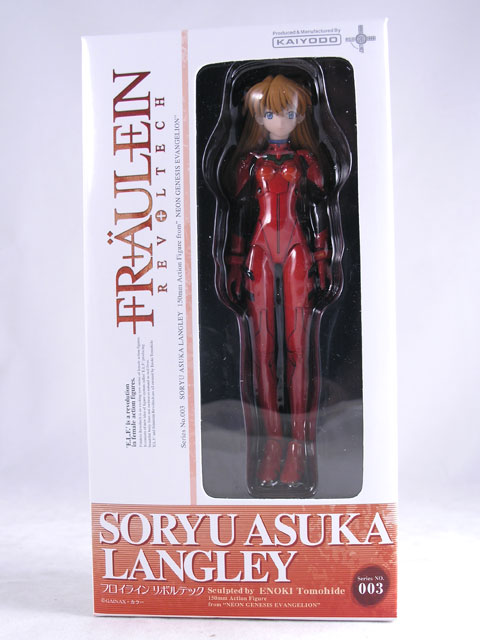 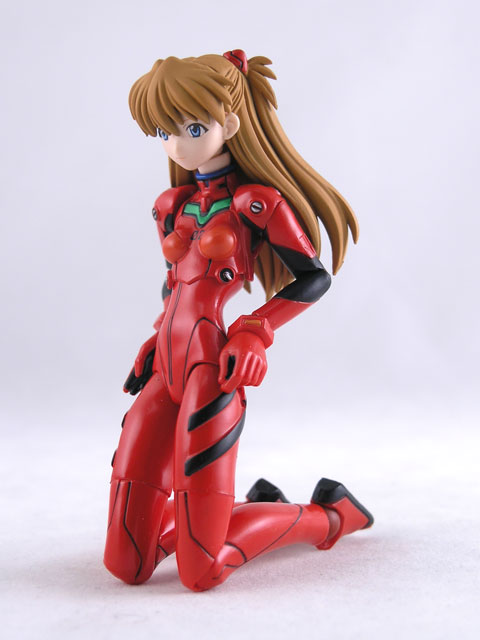 Asuka's likeness is remarkable. Enoki Tomohide did a fantastic job on the sculpt. She looks just like she stepped out of the anime. It is unfortunate that she only comes with one head, because Asuka is a girl of many emotions. The head she has here has kind of a vacant look on her face. Revoltech joints are used sparingly in the figure, and they are hidden well. There are Revoltech joints in the neck, chest, shoulders, wrists, hips and ankles. The rest of the joints are standard cut joints. Articulation is very good, with one minor oversight. The legs cannot bend upwards, so having a pose where the character is sitting and pulls her legs up to her chest is not happening. 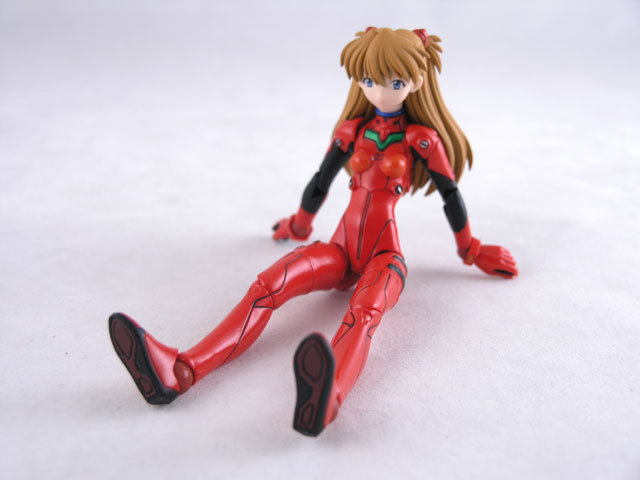 The shoulder Revoltech joint is a little loose. The joint itself is fine, but where the peg goes into the shoulder could be tighter. Included with the Asuka figure is a stand featuring a dual Revoltech joint and a clear connector. The connector clips around the waist and does not plug in to the figure. The base has the figures name printed on it in white. 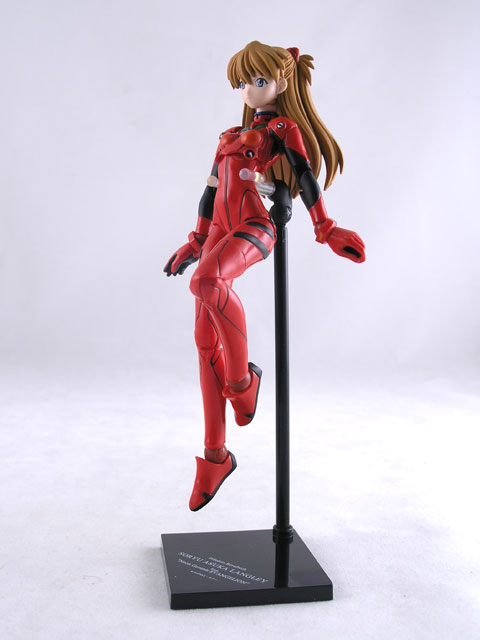 The figure comes with a few accessories. Palette gun 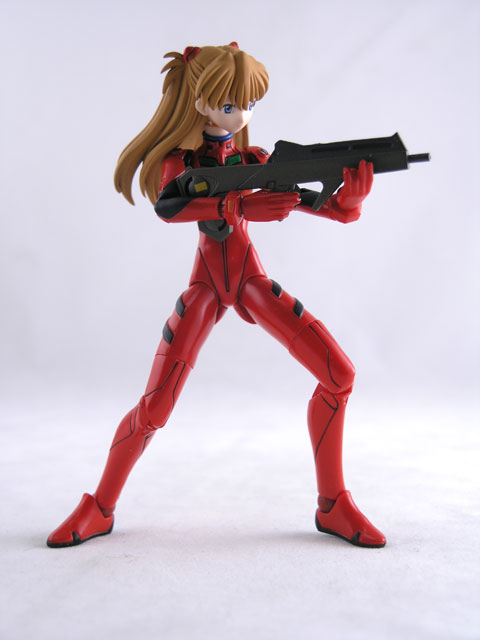 Mama doll. Look this one up on her Wikipedia entry. It's a dark story. The doll has a revoltech joint in the neck. 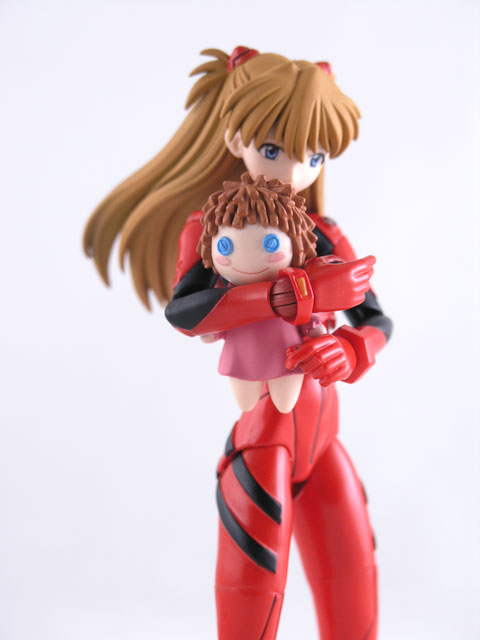 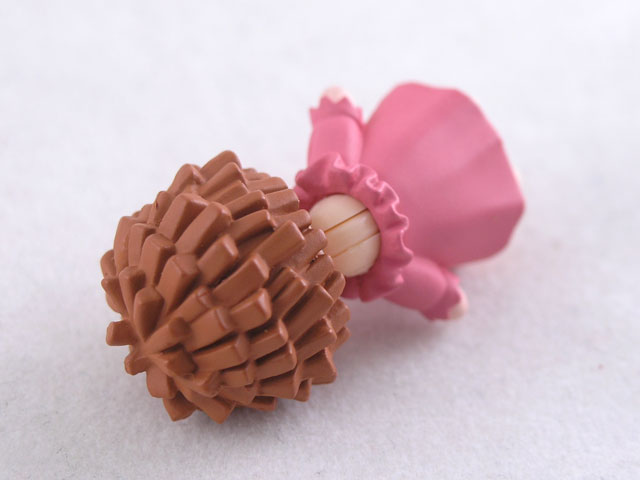 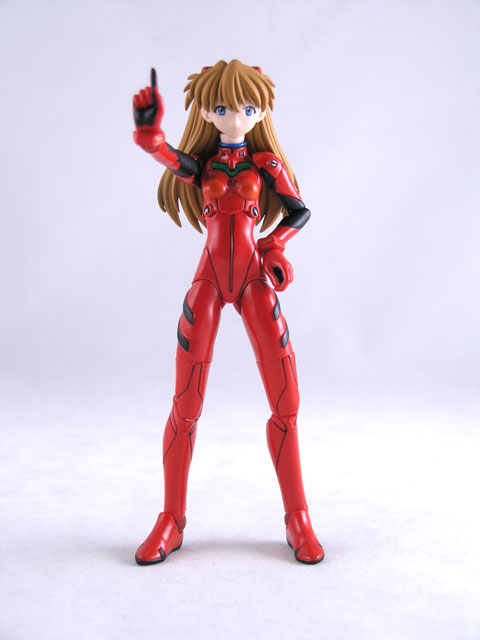 I'm thoroughly impressed with the Revoltech Fraulein line. If you like a quality action figure, i say grab one. Just because it's a female figure doesn't mean you robot nerds can get one. Get in touch with your feminine side. 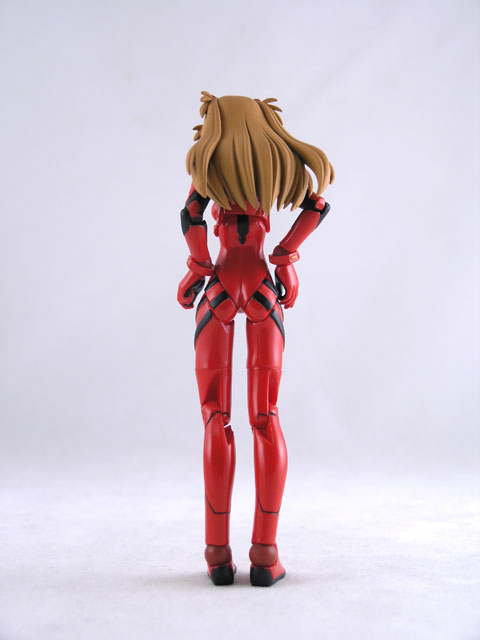 Poor Asuka... Her mother got taken by the Eva Project, and now she pilots one of those very monsters. But out of those ashes, yes, she became quite feisty and confident.

When piloting, the Children's legs don't raise up in the Entry Plug seat, which is probably why that particular articulation was omitted.

I usually don't stay for the credits, 'cause they're pretty much a repeat of the opening credits but with some optional disclaimers, trademarks, 'n such attached (which I know is a given). But, now that you mention it...

I don't want one, but I imagine that I too would be disappointed that Asuka-chan didn't come with a few different faces. I mean, it's okay for Rei-chan to have a neutral face 'cause that's just the way she is 'n all, but I agree that Asuka should've had at least two more faces to work with.

Why do people insist on calling them "Pallet Rifles"-? They're called "Pellet Rifles" because they use clip-less ammo, not shells, and have to be reloaded in-shop as opposed to on the battlefield; which essentially makes them one-time use only.

I must say, your advertisements for Angolz.com are seriously working for me. Seriously, if you guys weren't continually plugging Angolz I never would have visited the site. Because of that I am actually switching from HLJ to Angolz for some of my importing needs.

I assume that people call them "Pallet Rifles" because, to my best recollection, it is spelled this way in the subtitles at least once (I'm thinking the episode with Shamshel...not sure though, I'll check later). Whether or not this is how it's supposed to be spelled, anyone who sees it spelled like that within the series is probably likely to stick with it...

hehe I like the little bit at the end of the video.

Out of all the revotech girlie toys this is one I don't see my self getting not that i dislike the character I think shes cool I'm just not a fan of her plug suit look. maybe when the do a school uniform edition (and you just know they will) i will take a look.

Now Pocco looks cool even if I've never seen her before I seen her toy.

Ya know, something funny just occurred to me:

Can you take Asuka's head off, and then swap it onto the Revoltech Unit-02's body?