A very brief description of Shadow Dagwon from Wikipedia:

The shadow warrior. Calm, mysterious and a puzzle even to his team members. He's the only one to have "subordinates", animal robots stored in the form of cards.

Today's review will be centered around the re-issue of Shadow Dagwon manufactured by Sonokong/Takara. This toy can be purchased from eBay using the links provided below the review.

Shadow Dagwon DX comes to you in a beautifully illustrated, heavy corrugated cardboard box shown below. Once again, I have to say that I am a fan of the packaging used on these Sonokong re-issues so far. 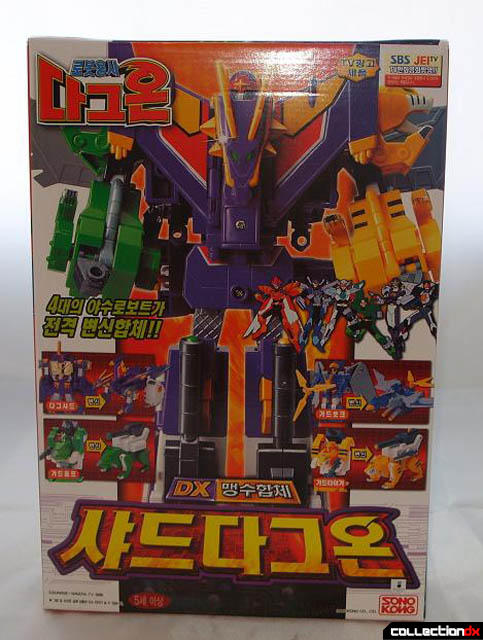 I decided to do this review in the order of Robot mode, Beast mode then finally the combined mode. The first photo is the group shot so that you can see all the players on the Shadow Dagwon team in Robot mode. As you can see, the team is made up of Shadow Dag (Purple robot), Guard Hawk (Blue Robot), Guard Wolf (Green Robot), and finally Guard Lion (Yellow Robot). 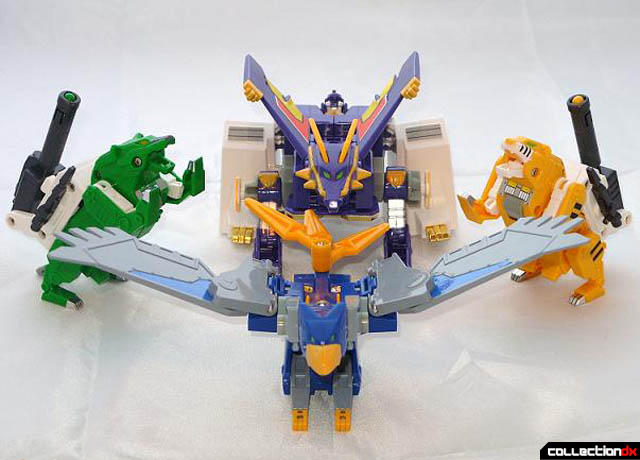 Lets start off with the big guy, known as Shadow Dag. Shadow Dag comes with a sword, sheath that becomes a ninja star launcher and 6 yellow ninja stars (shown below). The figure stands approximately 6" tall and is mainly comprised of quality plastics. Articulation is limited to the shoulders and elbows. Shadow Dag is the main robot that becomes the chest of Shadow Dagwon. 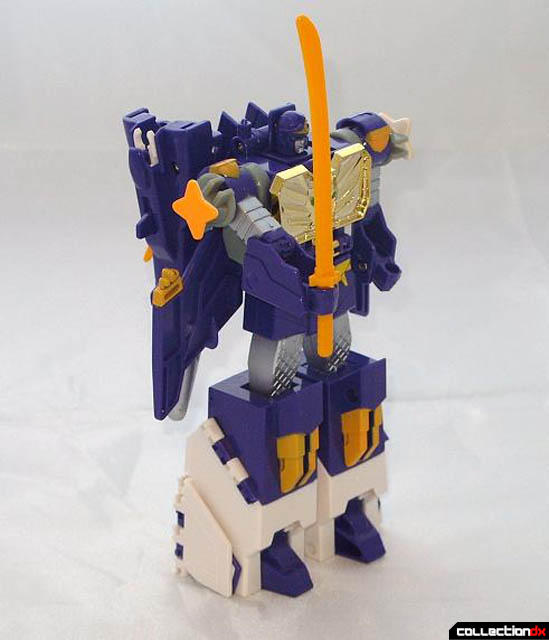 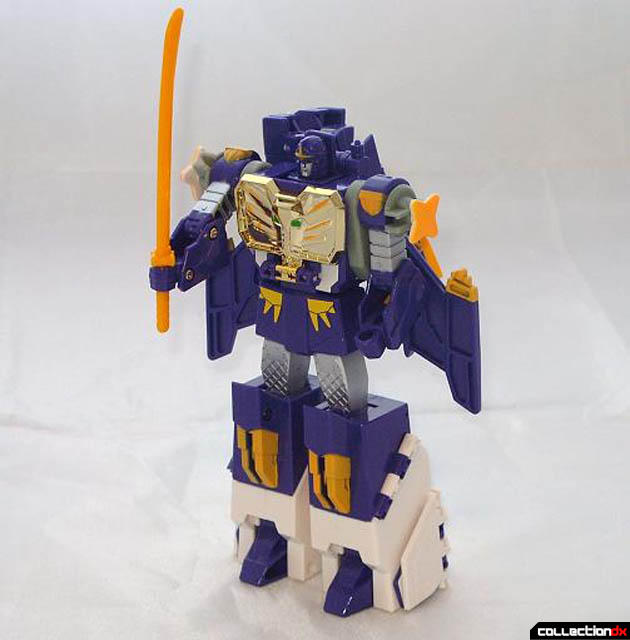 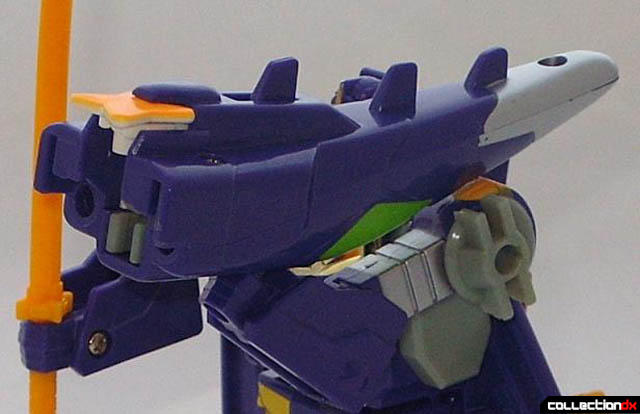 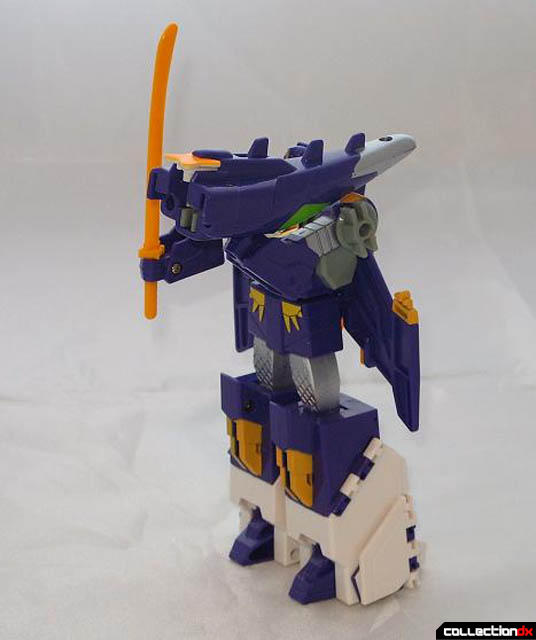 Shadow Dag is the only figure in the bunch that actually can transform into 3 modes. This second mode is called Shadow Jet. 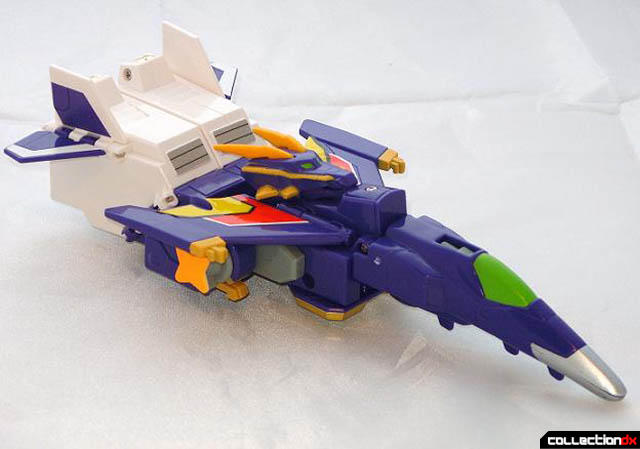 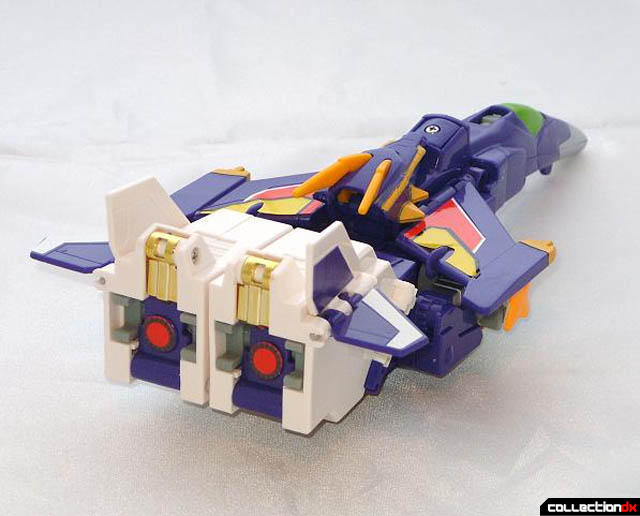 Shadow Dags final mode is Shadow Dragon. Shadow Dragon it the fierce looking robotic Dragon shown below. Articulation can be found it Shadow Dragons front legs and the wings. 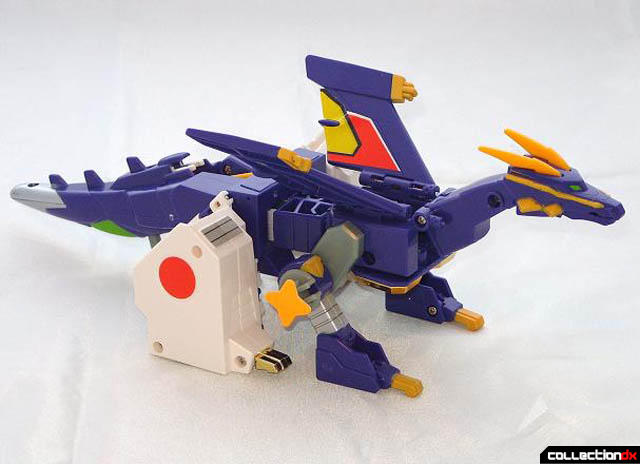 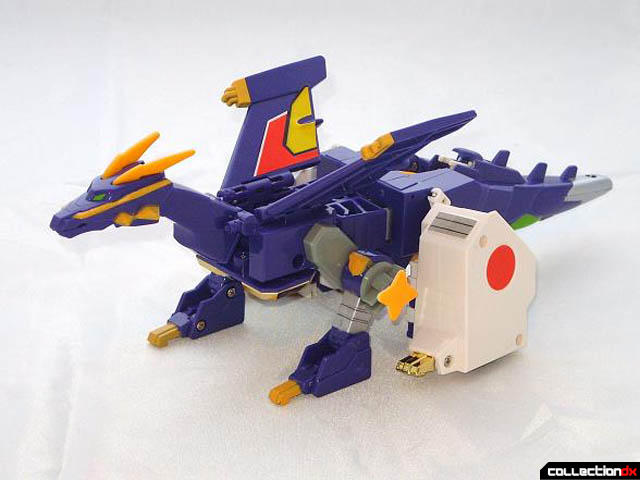 Now on to the 3 Shadow Guards, Wolf and Lion are up first in robot mode. Wolf and Lion are basically the same robot with slightly different molds as well as the obvious green and yellow color difference. Both figures include a hand gun as well as a back mounted cannon that can fire one of the 12 included missiles (6 yellow and 6 green). Both figures are able to transform from robot into beast forms. In robot form articulation is very limited. Only the elbows are really movable. You can move the shoulders but this will make the backpack cannon fall of easily. When in Beast mode, both figure can move all four legs and the cannon can be raised or lowered. Also note that the hand guns from robot mode can be attached to the side of the cannon mount, Guard Wolf and Guard Lion become the arms as well as the feet of Shadow Dagwon 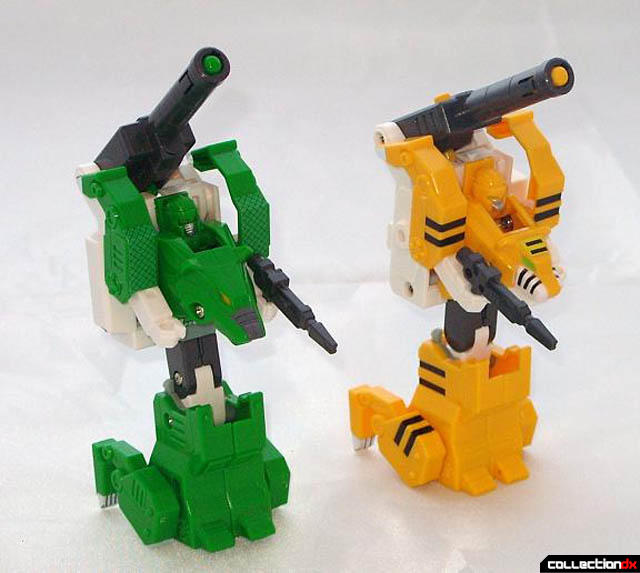 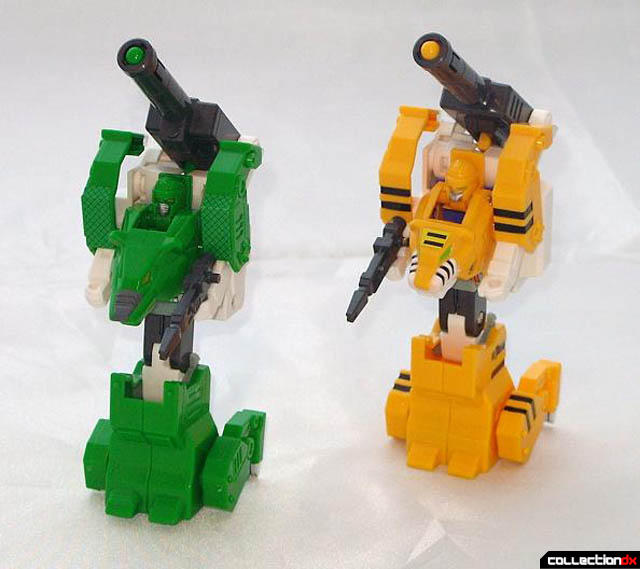 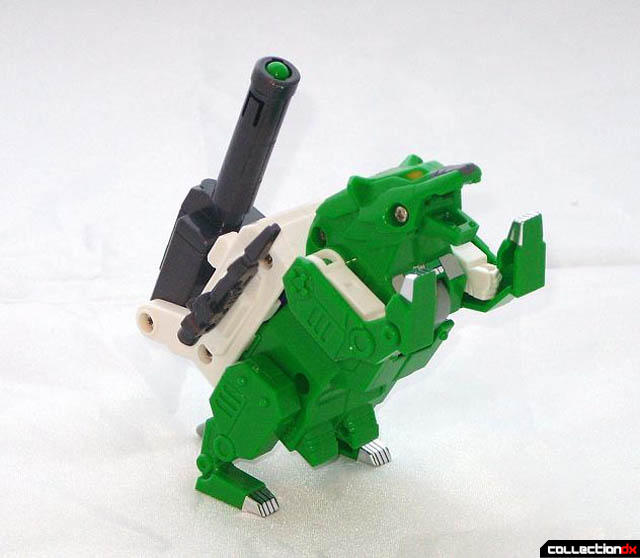 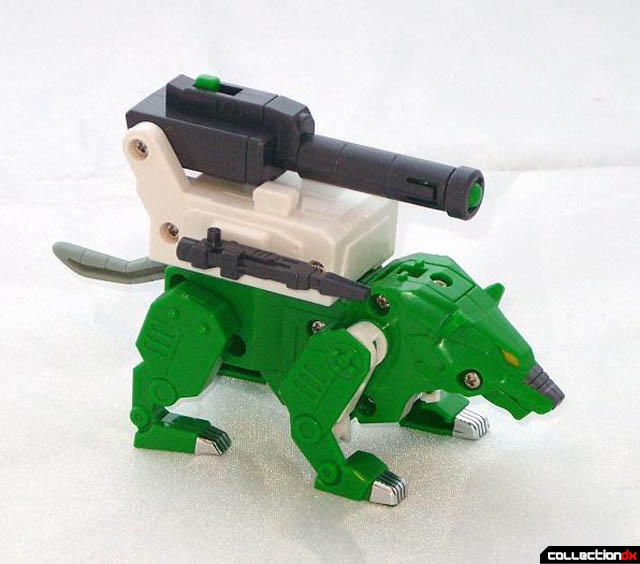 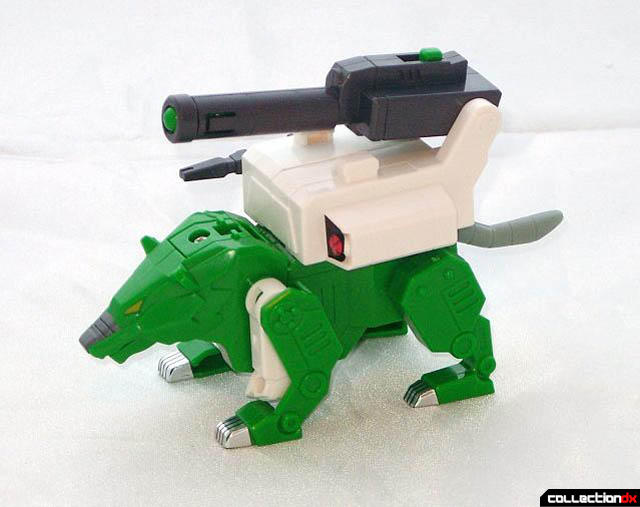 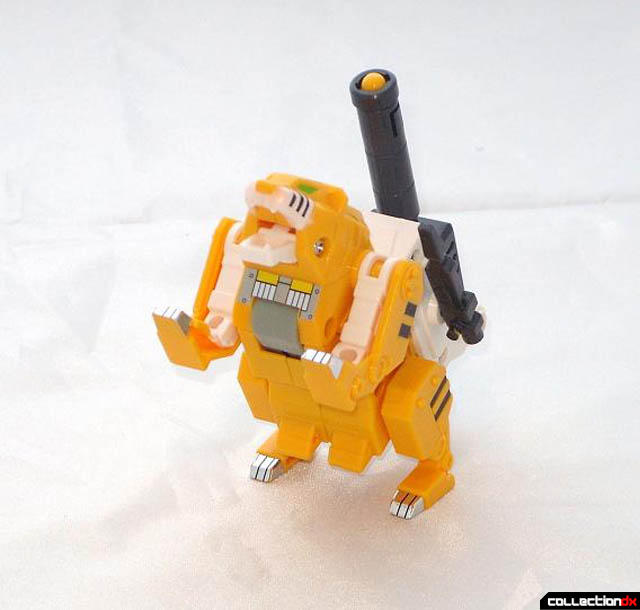 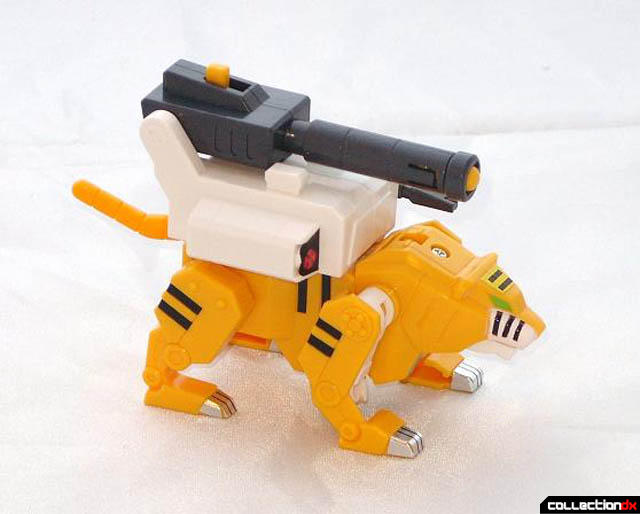 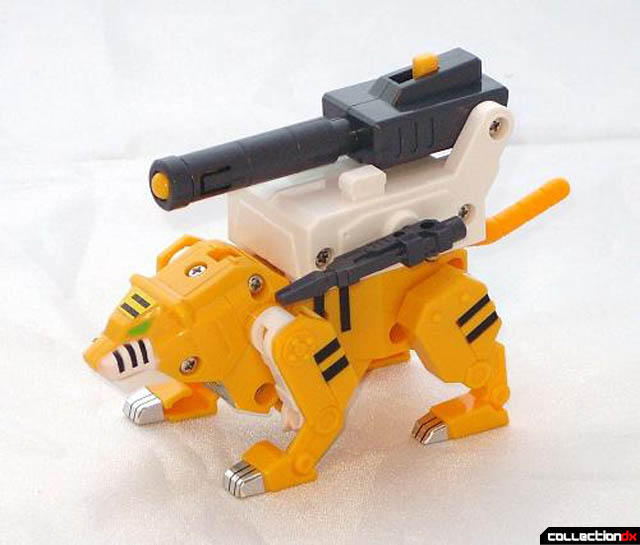 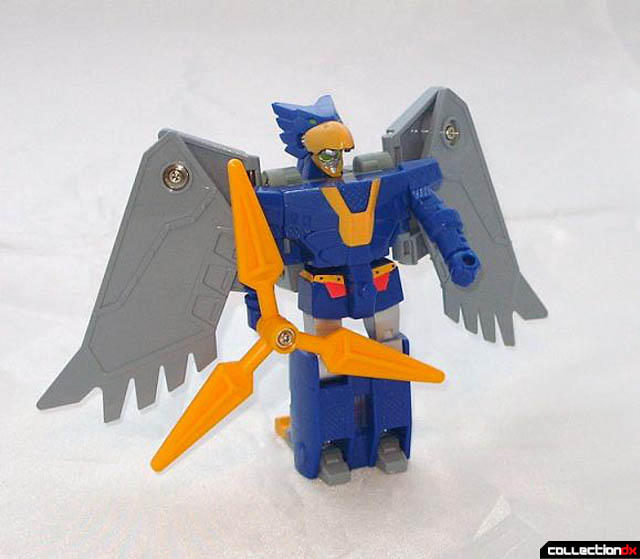 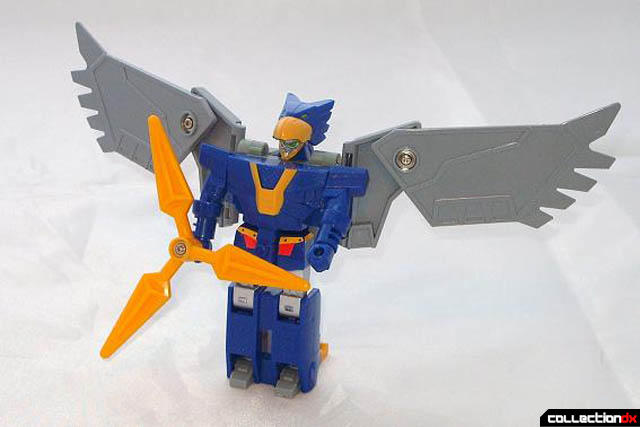 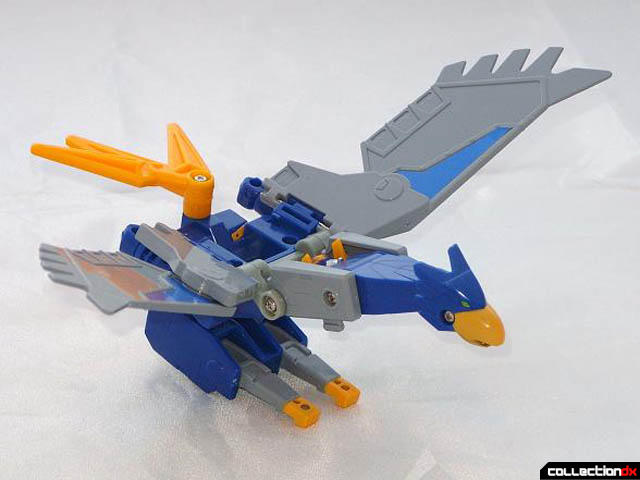 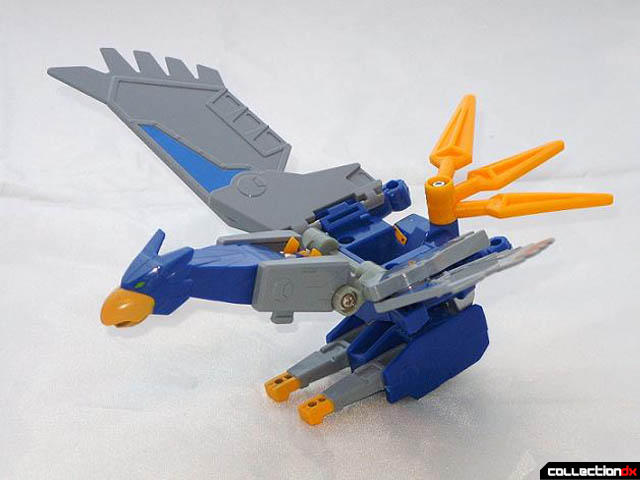 Here is the whole team together in Beast mode. 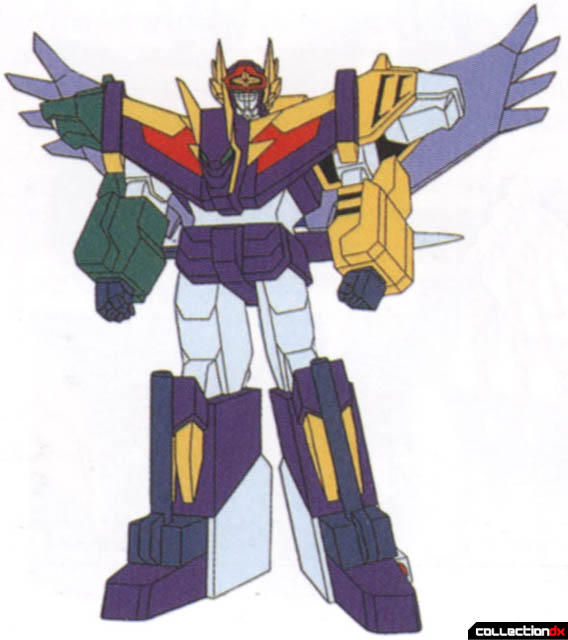 Shadow Dagwon is very impressive at nearly 10" tall. When all the figures are combined into Shadow Dagwon, they are extremely sturdy. Articulation is limited to the shoulders, elbows and wings. In this mode all of the weapons can be utilized or stored. Note the Sword sheath mounted to Shadow Dagwon's back and the hand guns mounted to the top of what was Guard Hawks talon's. Very cool looking indeed! The back almost reminds me of the Soul of Chogokin GX-13 Dancouga. 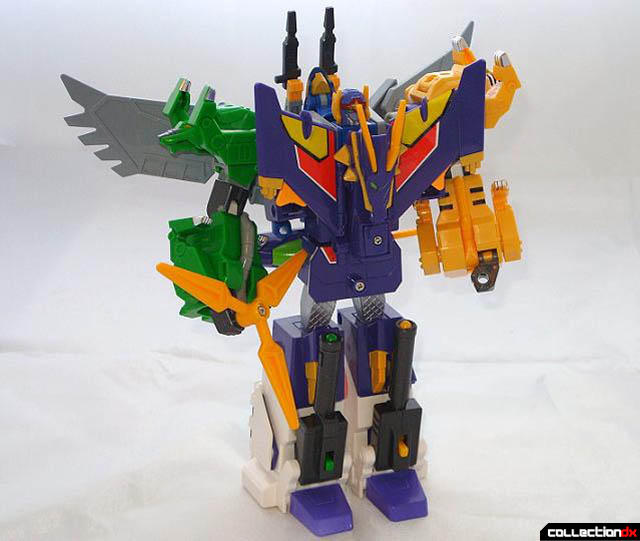 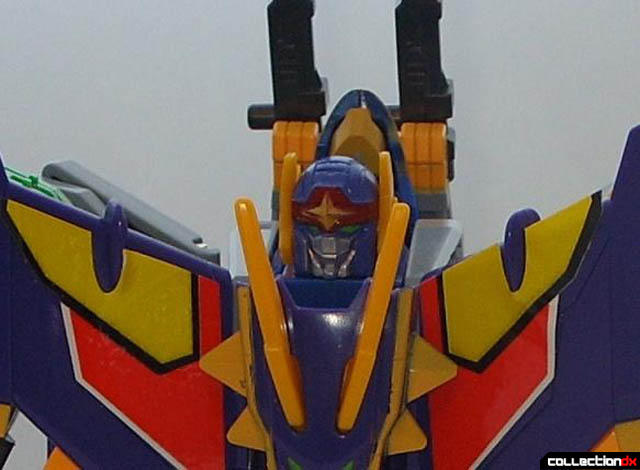 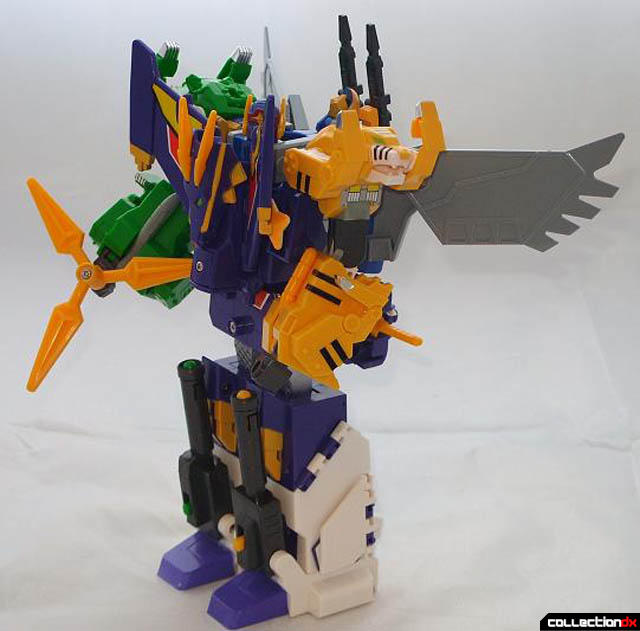 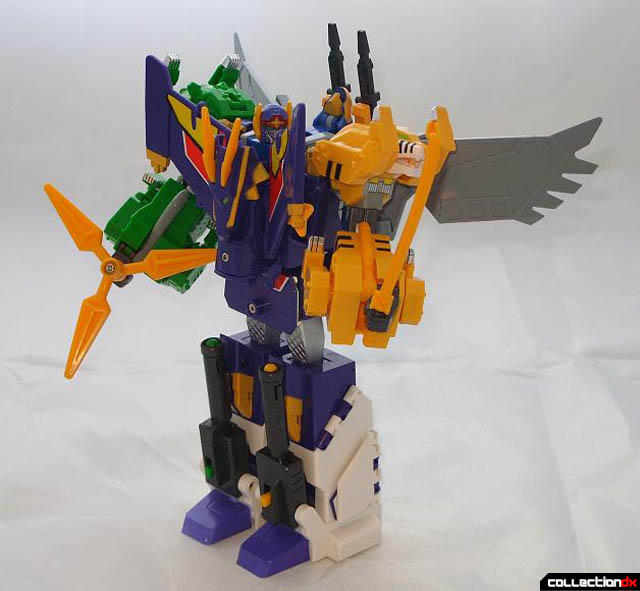 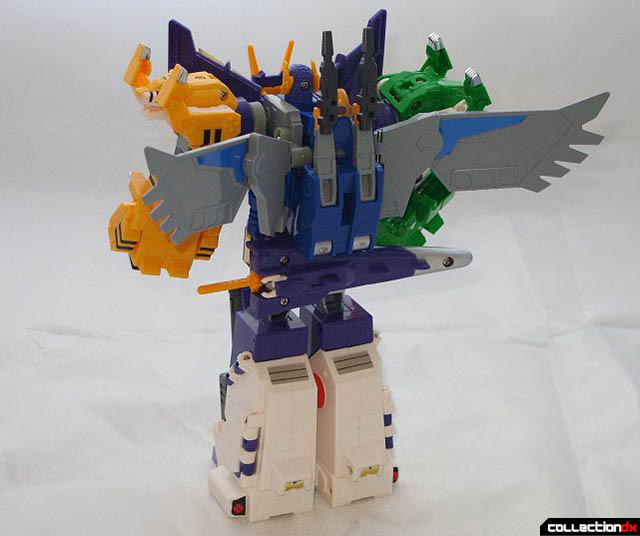 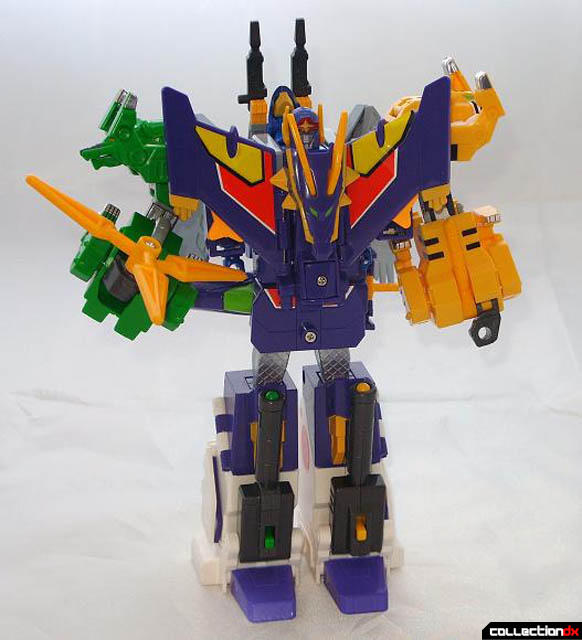 To sum it up, I really like this toy. It is a quality item that has a ton of play value. I love all the firing gimmicks and the fact that it is relatively easy to transform into the different modes. I also like the way the weapons all seem to have a place in all modes. In my opinion it is a very well thought out toy.

10 comments posted
...they're not called 'ninja

...they're not called 'ninja throwing stars'; that's an American-ism. They're actually called "shurikens".

Um...actually, they're called shaken (pronounced shah-ken...not how James Bond has his martini's!). And you don't put an "s" at the end of Japanese words to pluralize them. But seeing as how they actually are ninja throwing stars, why would it be wrong to refer to them that way in English?

Anyway, I've never handled this toy, but from the review, I can tell that I'd love the playability of it. Classic sentai-esque combo...but the one thing I don't like is the color scheme...just don't appeal to me that much...

Eva, I grew up in the US of A and I call them Ninja Stars, sorry for not using the correct term but I think everyone will know what I'm talking about...LOL

Thank you for the support Sanjeev!

Since we're already being pedantic, shaken are a TYPE of shuriken. Shuriken just means a thrown weapon. Shaken are also called hira shuriken. These are not to be confused with bo shuriken, the long spike ones!

More than you ever wanted to know about shuriken: http://www.geocities.jp/meifuenglish/1p.html

This is dumber and more American but corroborates the info: http://www.ninja-weapons.com/newsletters/2003_7_17_9_45_37.shtml

And as a last resort, wikipedia! http://en.wikipedia.org/wiki/Shuriken

I'm sure the peasants didn't care what they were called when they were being thrown at their throats!

There used to be a bootleg version of this when I was a kid...that would be around 1997. It functions the same way as the original, only the materials used are cheap plastic and the colors are wrong.

I can definitely see how this guy's design went into Volfog, especially with the arms. Although I just have this horrible image in my head of Shadow Dagwon shooting himself in the face with those cannon missiles.

Also for those of you who may be interested, the Koreans pronounce this as "Shod Da Gu Own".

Nice to see there are reviews of Brave toys here but I just wanted to say that the Purple robot is called Dag Shadow (not Shadow Dag) and the yellow robot is Guard Tiger (not Guard Lion).

Fantastic. Utterly fantastic! Already one of my favorite Brave toys. Toys of play value, and pretty decent looking modes all around.

A nice review. I had actually forgotten that the guard beasts had robot modes too. You'll defenatily get your moneys worth with this guy. BTW the main robot is called DagShadow, not ShadowDag, but you were close. :) Cool review.