Next up in my series of reviews for the Saint Cloth Myth line is Sea Horse Baian, one of the seven Generals of Poseidon and Bandai's latest release in the series. Baian guards the North Pacific Ocean Pillar and fights our main hero Pegasus Seiya.

He is (in my opinion) a forgettable villain in the TV series but turns out to make a beautiful addition to this line of collectibles. 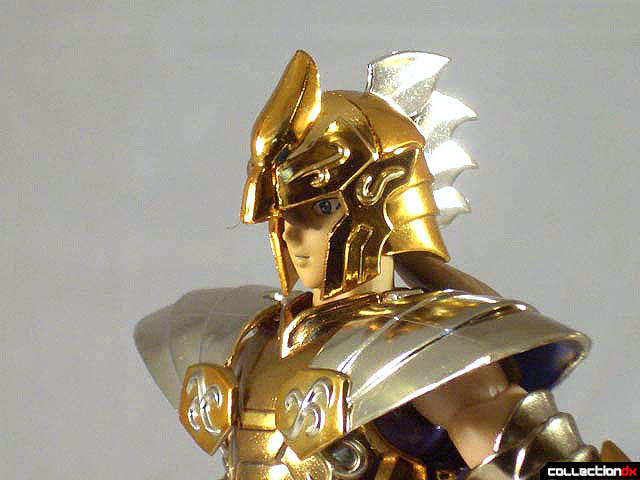 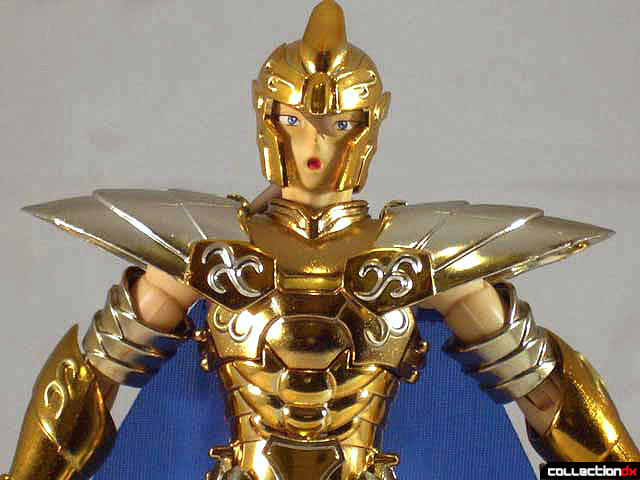 I was fairly ambivalent towards the character and the promo pictures for the toy did not change my mind, but when I got the figure out of the box and put it together, I was very impressed. 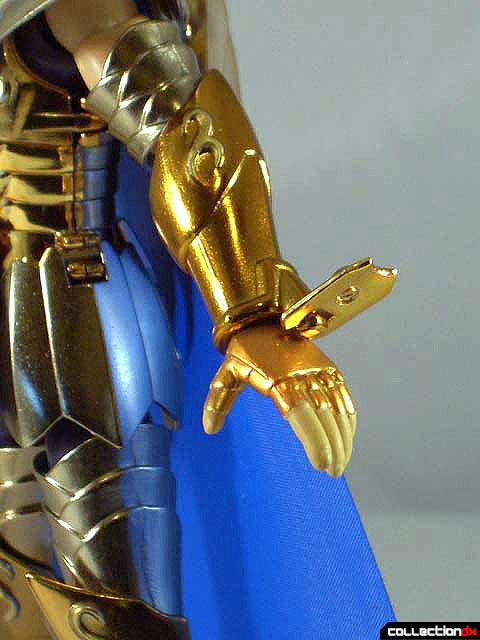 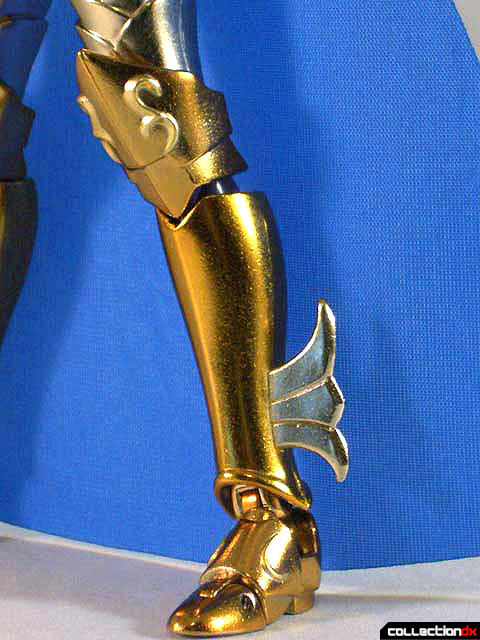 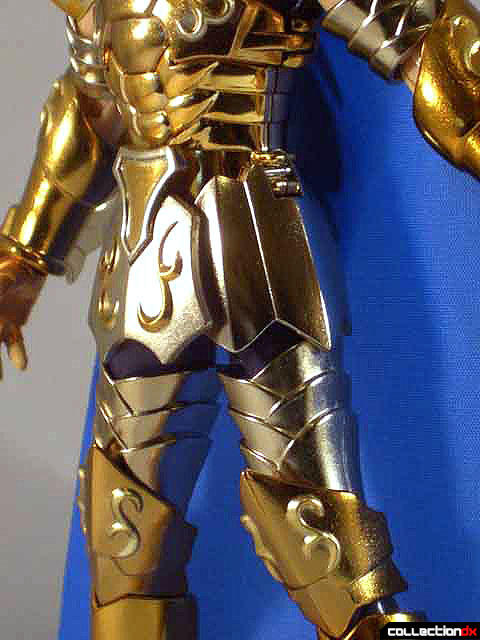 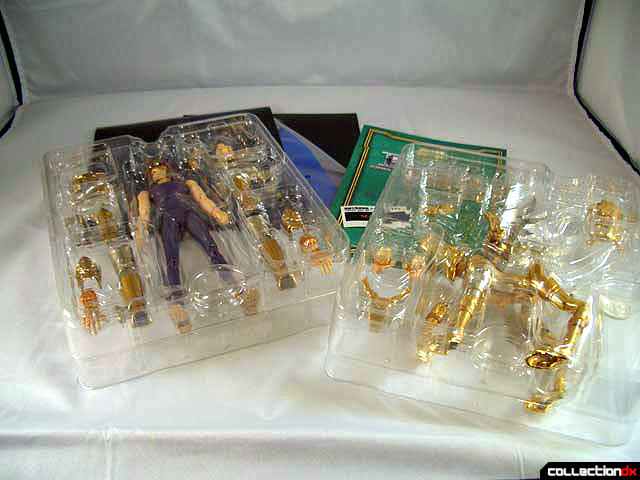 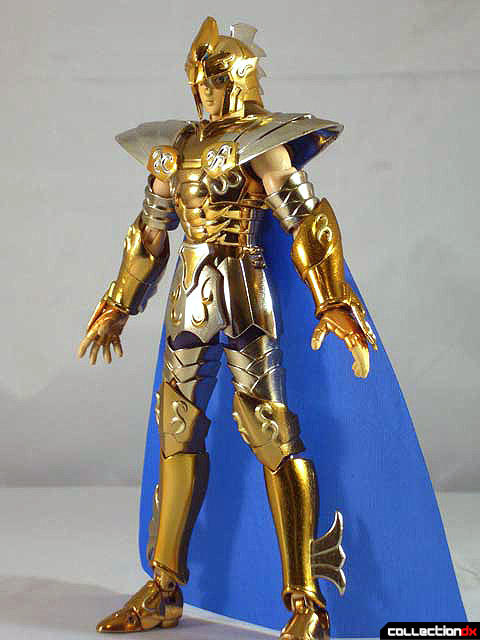 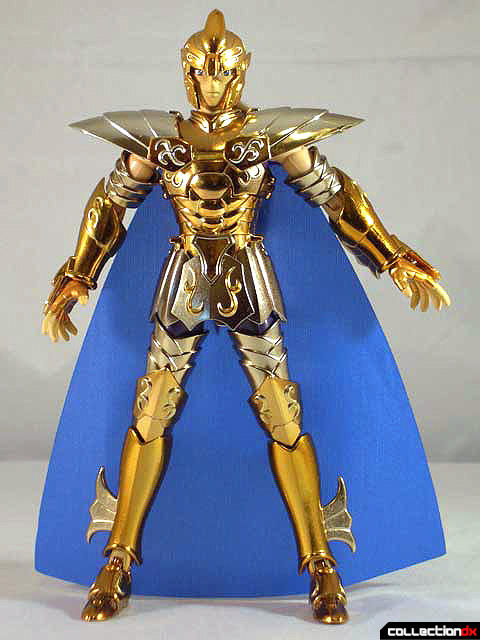 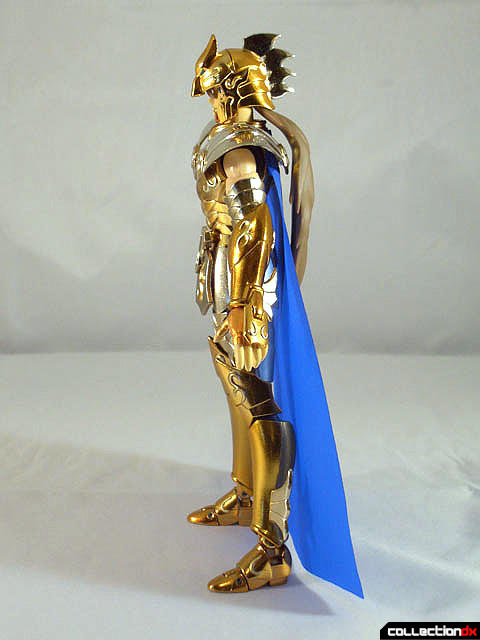 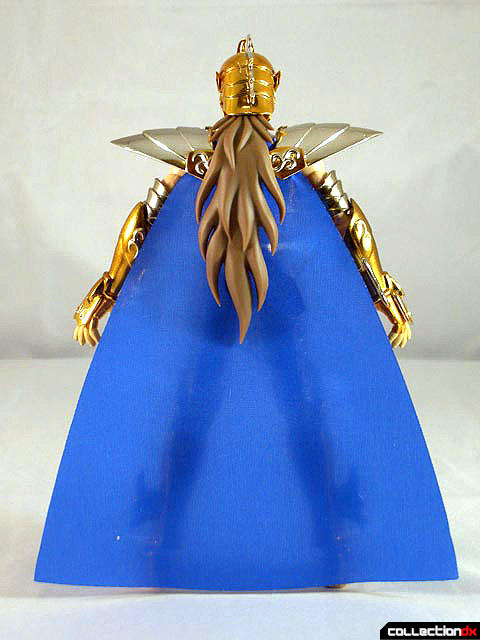 In the series the color of Poseidon’s Scales (armor) is heavy in orange which I think is kind of ugly, the toy is more gold, while not accurate to the cartoon it looks stunning on the shelf. It also has a ton of diecast, with only the helmet, shoulders and wings being plastic. 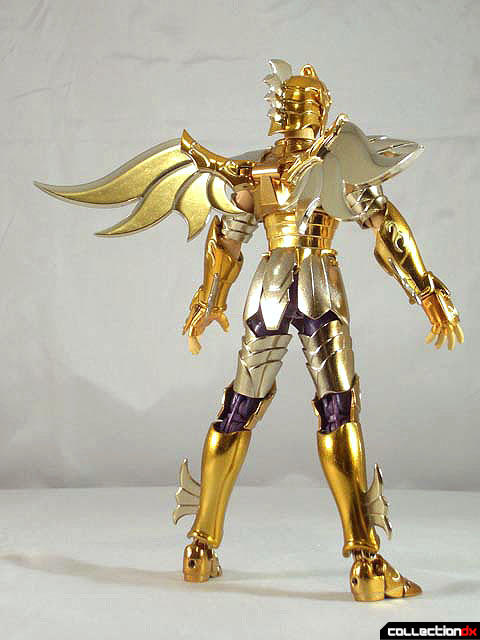 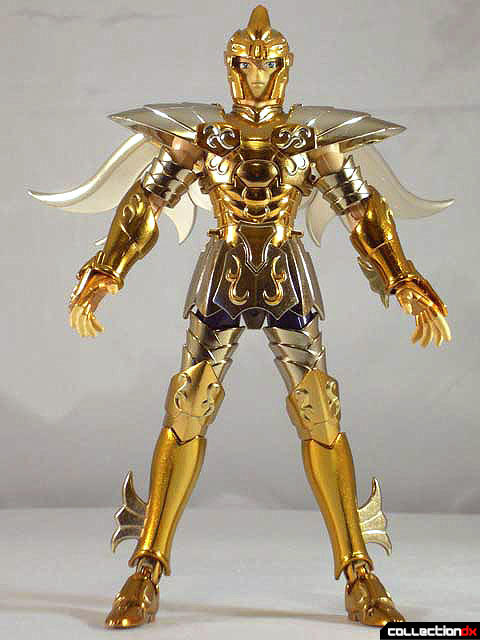 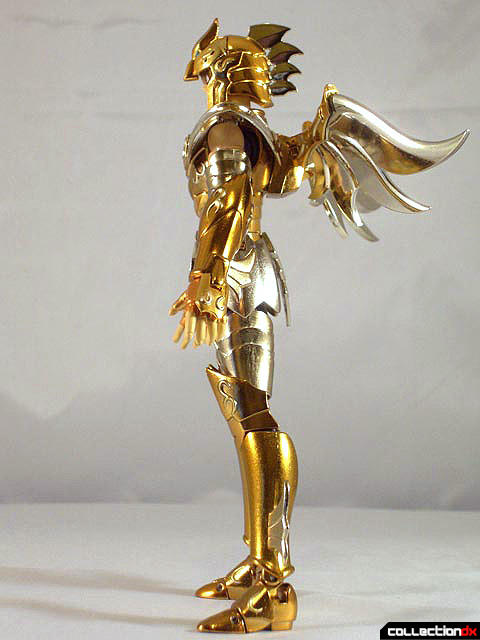 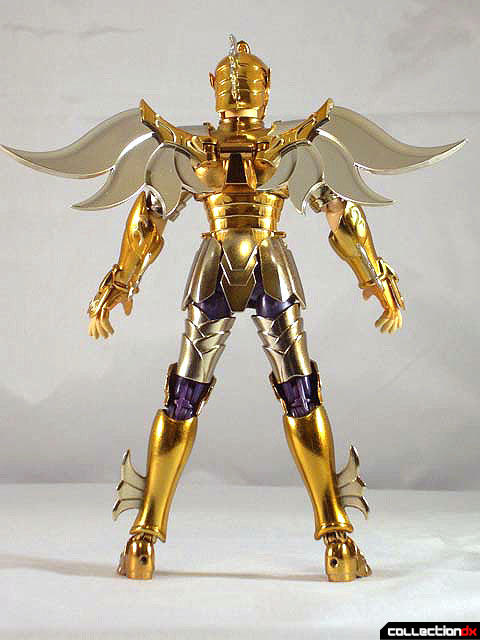 The figure features both a cape and a wing pack much like Seiya’s Pegasus Cloth (armor) in both a closed and open form. In the series we only see him with the wings closed but the extra pieces make for some nice variety when you throw in how different the character looks with and without his helmet on. 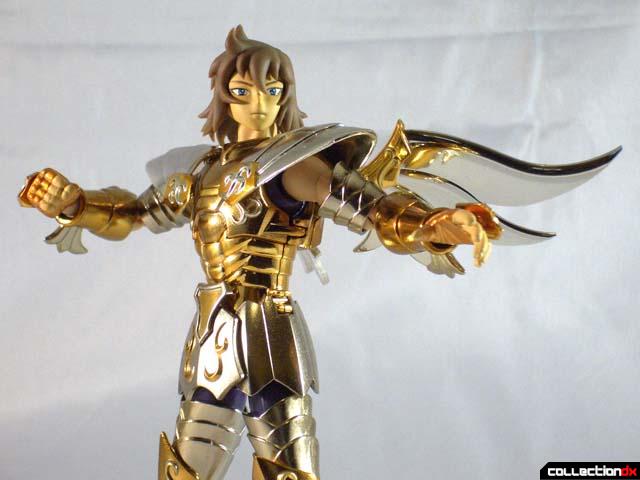 Personally, I like him best with the wings out and the helmet off. 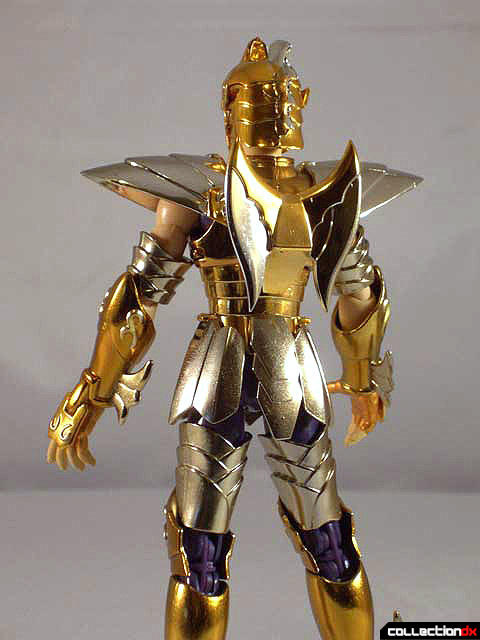 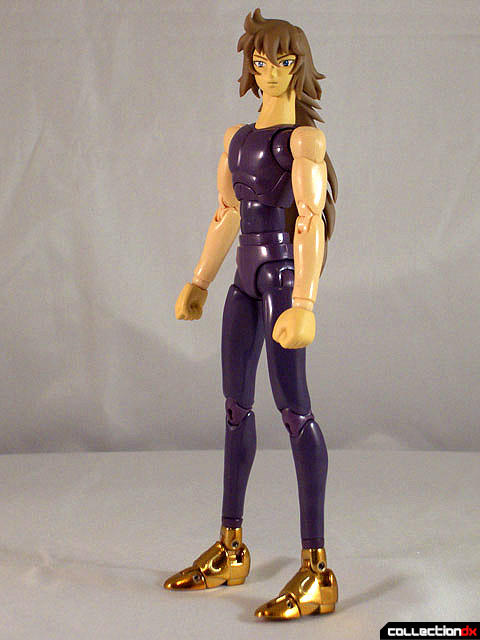 Finally, when the armor (Scales, Cloths, Robes, etc, etc) is not being worn it forms a statue of the constellation the armor is based on, in this case, Poseidon’s finned horse that pulled his chariot. 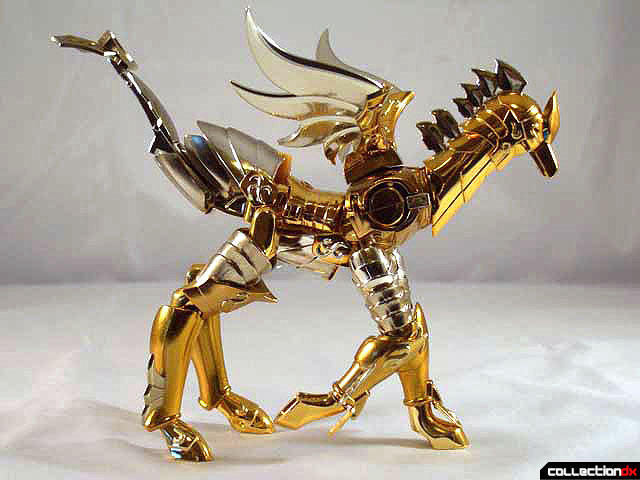 Bear in mind these are collectibles for adults with their volume of parts and pieces combined with the shiny armor parts make for something that would not stand up to playground beatings and all but the most OCD afflicted children would lose parts and pieces in no time.

With that said I continue to be floored at the quality and sheer presence of these figures on the shelf. I’ve said it before and I’ll say it again, you may not want to watch the series but with the top-notch quality, generous amounts of diecast and sharp armor designs there is bound to be one that appeals to you. I’m here to say they're well worth the money.

I have as usual included a video review as well. Enjoy.

Great review
I also thimk that the scale color is too light
BTW that Spanish dub is terrible!!

Really good review. I think this is my least favorite general in the anime, but in the figures he does look awesome.

Awsome review I really want to start collecting these figures now, are you going to be reviewing any other generals of posidon it would be awsome if you did