Figma, for those of you not in the know, is Max Factory’s answer to the Revoltech Fraulein line. They are poseable action figures but they are not just limited to female figures (but lets face it, most of them will be). 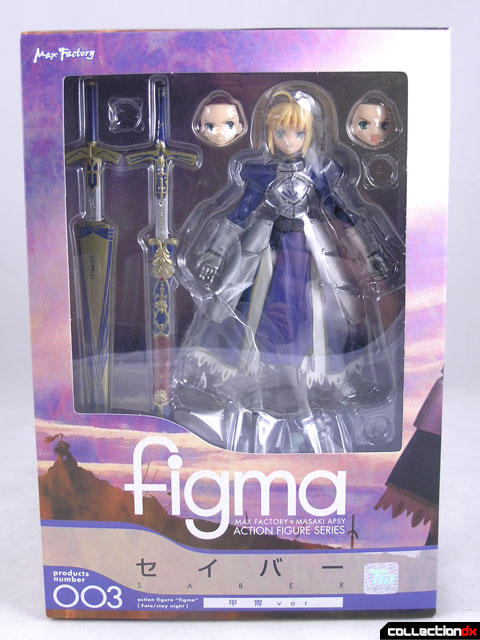 Saber is actually the third release in the Figma line, but it is the first one we are covering here at CDX. No, it is not mecha, but they are really nicely done action figures and we think they are worth checking out. 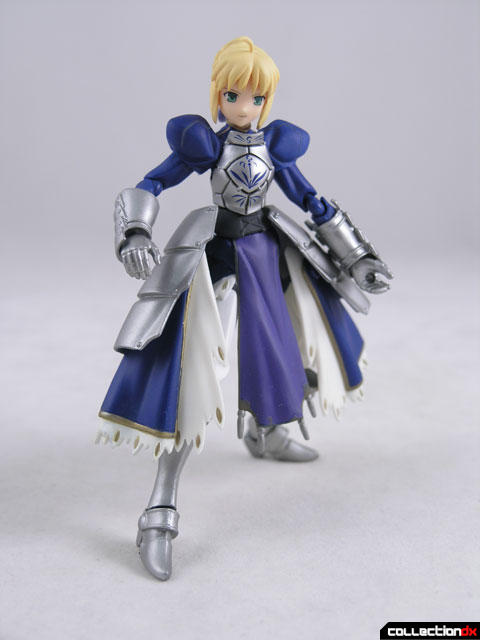 You may remember our previous Saber reviews from the Kaiyodo Revoltech 2G line. We loved those – they were done really well. Imagine our surprise when Max Factory comes out and does one BETTER.

That’s right; I think the Figma version is better than the Revoltech version.

Saber comes with a bunch of accessories, including a load of variant hands, 3 different faces, 2 different hairstyles, 2 different swords (with sheaths) and a display stand. 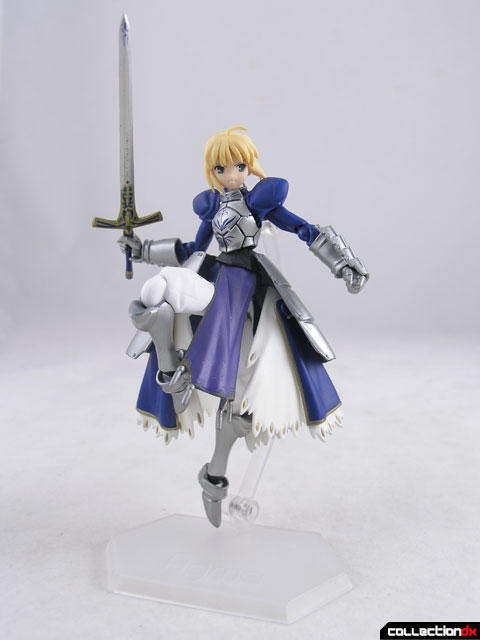 The faces can be swapped out easily by removing the front part of the hair, and can express all kinds of rage. 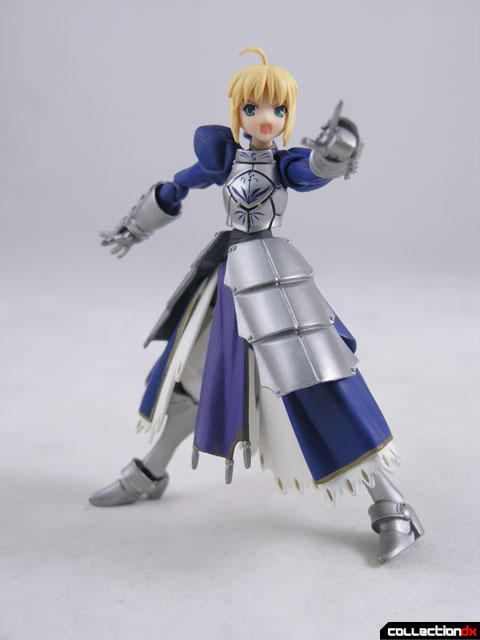 The hands easily plug into the arms, and each also has a swivel joint at the wrist. There are hands that can grab the swords, and hands that just look cool. And as an added bonus, included is a holder for all the extra hands (like Microman figures come with).

Both swords are intricately detailed, even with etched runes on the blades. Each blade slides nicely into the included sheath. 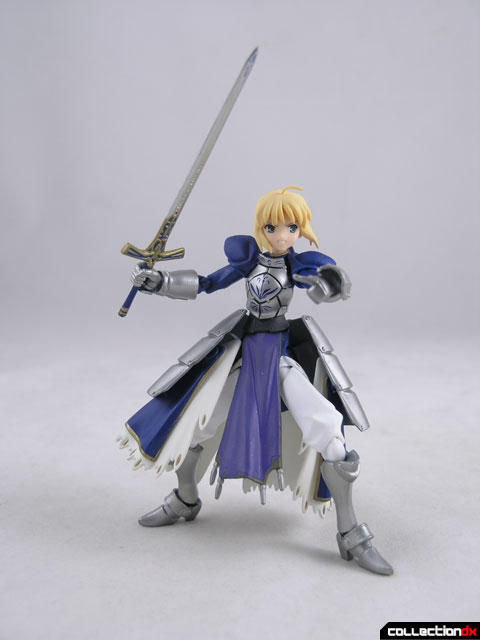 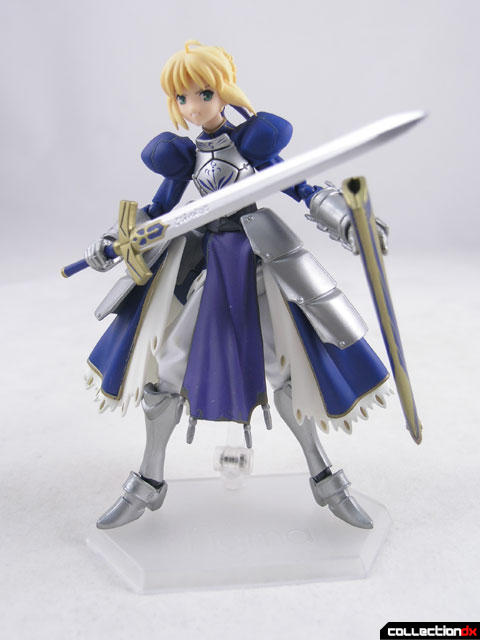 Saber is really constructed solidly, and all the joints are tight. They don’t click like the Revoltech ones do, but they don’t really need to. The way each joint is cut allows for a fantastic range of motion, especially in the knees and hips. Watch the video, you will see what I mean. 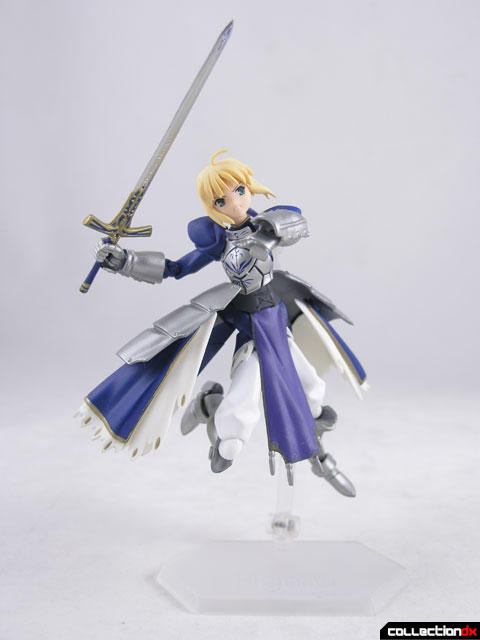 In addition, the armor of the figure is actually made out of several layers, and made out of different kinds of material. For example, the silver chest armor is actually a rubber-like material, and underneath it is a fully detailed and sculpted costume. The flowing skirt is a mixture of rubber and plastic, with the individual parts of the skirt being jointed independently. 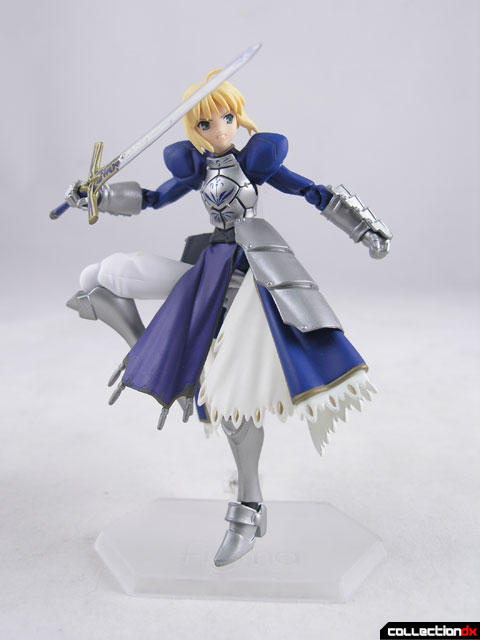 The figure is just done right on so many levels.

The stand is clear plastic with the figma logo embossed on the base. The jointed arm is secured by screws at the hinges, and connects to the back of the figure. It’s tight and solid, enabling a variety of poses. 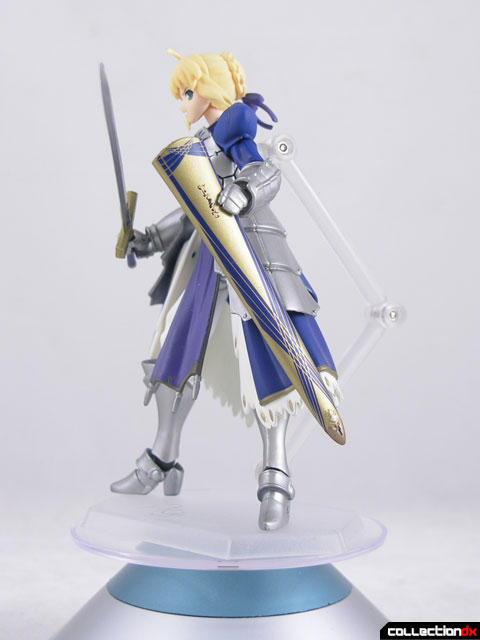 But by far the coolest thing included with this toy is one of the simplest things. I’m surprised more people don’t do this, and I hope more follow suit.

Figma includes a plastic zip-lock bag with the Figma logo and a large white writable area on it. Toss the box, because all your parts now fit in here, and you can label it so you know which fists each one goes with. How cool is that?

The Figma Saber figure is highly recommended. If you collect Revoltech figures, Moe figures, or just action figures in anime, you owe it to yourself to check it out. 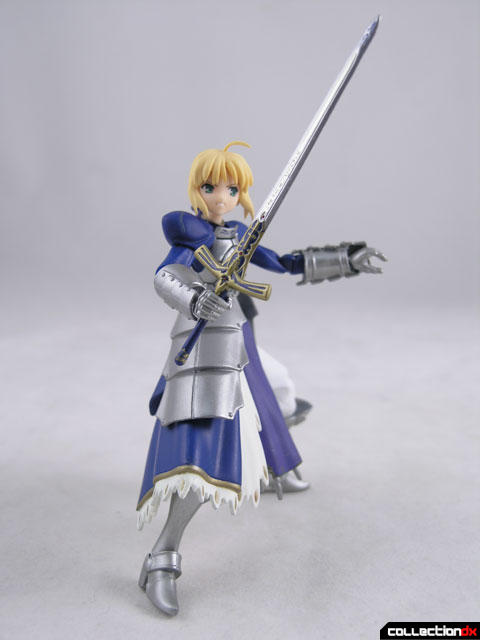 Cool toy, I'll look into them.
I wish I had my own pet Atom.

It's better than the revoltech? This... I must see for myself... Good review.

Frankly, I don't really like the way human Revoltechs look, and I hear a lot of complaints about the Fraulein line. I haven't had experience with the Frauleins though. On the other hand, I hear nothing but praise for Figma.