I personally have no love for Gundam: 08th MS Team. Its gritty take on the One Year War is marred by shoddy writing and bland characters. The Retcon-tastic Ground Gundams do not excite me either. However, I have found this series's obligatory GMs to be far more endearing than their red chinned cousins. I find them to be very practical in terms of design, without going too far off the base of the original GM or Gundam. I really feel like these guys should have been the star of the show. 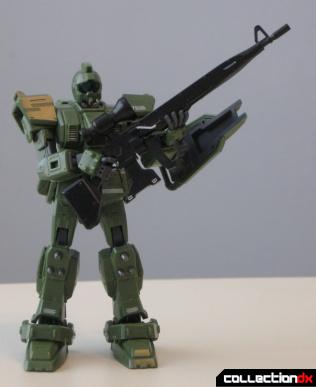 The RGM-79[G] GM Sniper makes it appearance throughout the course of 08th MS Team, first just as background filler and later as fire support for the Kojima Battalion's Big Tray class ship. Its most notable difference from the standard GM[G] is its olive drab paint job and ridiculously large beam sniper rifle. 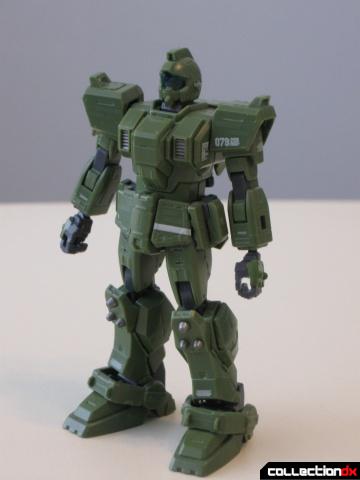 For the fiftieth HCM-Pro release, Bandai put out two GM[G] toys. One was the standard tan and orange colored unit and the other was the Sniper variant. Both are physically identical, with the only difference being the accessories included in each set. The toy is cast almost entirely in olive drab plastic, with a few bits of gray. It has numerous markings, including several areas with tiny text. 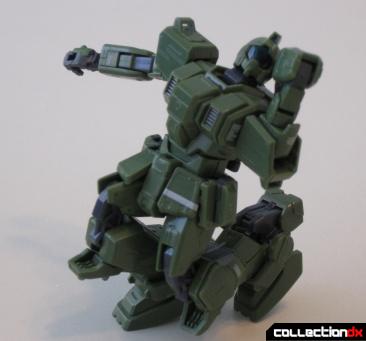 Like almost all HCM Pros, the GM Sniper has a surprising amount of articulation in its small frame. The knees are double-jointed and the elbows are designed to mimic the range of motion present in a human arm. The waist can be pulled upward to allow the torso to dip to the side. Combined with ball jointed toes, the GM Sniper is really flexible hand candy. The only unfortunate thing is that the shape of the ankles does not allow the feet to be pointed downward which can be annoying when it comes time to do some laying down poses. 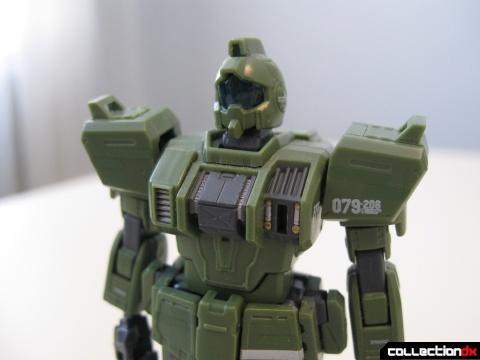 Like most HCM Pros, the GM Sniper has removable panels that reveal select bits of inner detail. Unfortunately, the panels on the GM Sniper are prone to falling off. Especially the center chest piece. 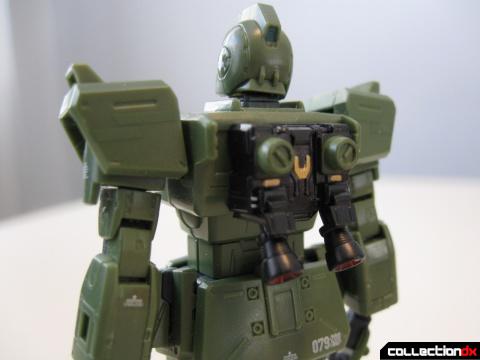 The armor over the backpack can also be removed. It does not fall off as easily as the front panels. The backpack itself can be removed and replaced with the carrying rack from the Ground Gundam 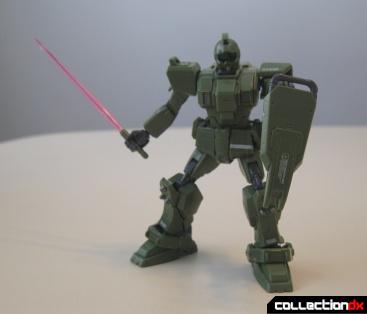 Accessory wise, the GM Sniper comes with the standard spread of Gundam weapons which includes two beam sabers, one 100mm machine gun (w/ three spare magazines), a shield, and the beam sniper rifle. It comes with a pair of saber holding hands, a pair of gun wielding hands, a pair of open palm hands, one hand specifically for the sniper rifle, and one for holding the spare magazines. The shield's notable feature is the mounting arm, which allows it to swing out over the GM Sniper's hands. 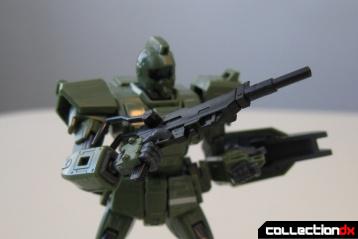 Here you can see the machine gun's folding stock and the removable magazine. Each hip armor mounts a spare magazine. 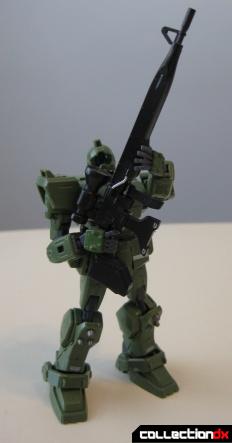 The GM Sniper's most recognizable weapon is of course, the sniper rifle. It measures 9 centimeters in length, which is pretty impressive considering the GM itself is only about 11 centimeters tall. It features a movable fore grip and a movable gunsight. The gun sight itself has a small set of crosshairs painted on the front lens. The few times this weapon is featured in the OVA, it was tethered to some kind of support system. These tubes are present on Master Grade kit but not on this toy as it is meant to represent the GM Sniper that struck out on its own in order to destroy the Apsalus III. 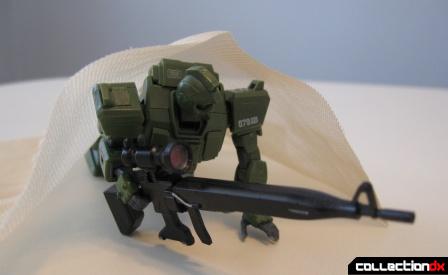 Probably the strangest accessory included with this toy is the swatch of mesh cloth that is supposed to look with the canvas netting modern armies use to camouflage their equipment. As I have learned from many 1/6 scale figures, small bits of cloth do not fold convincingly enough to mimic regular clothing or coverings. As a result, the cloth just doesn't look right when draped over the GM Sniper. The cloth itself is big enough to wrap the GM Sniper in. 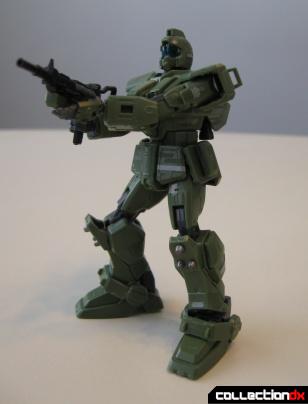 Overall, this is one of the most solid HCM Pro toys. Easily one of my favorites.

I don't know what you're talking about.

90 Centimeter tall sniper rifle?! Sure that wasn't a typo? :D

EDIT: Drat, that's what I get for opening the tab an hour ago and finally replying.

Maybe there are other reviews I wasn't aware of. It's really a great line of toys, even if it's just Gundam. I wish I could get into the Revoltech and Max Factory and all, but they feel too much like rubber to me. I like a robot toy that doesn't slouch on a hot day and this is it.