Anyone who is familiar with the works of Leiji Matsumoto, has surely heard of Galaxy Express 999 the movie. One of the characters in this movie is Pirate Queen Emeraldas. She appears in this movie along with Captain Harlock, another well know Matsumoto character.

Today, I will be reviewing, the movie version of Pirate Queen Emeraldas flagship, ironically named the Queen Emeraldas. This will be my third entry into Taito's Super Mechanics line of UFO catcher prize toys.

The Queen Emeraldas comes packaged in the now familiar window box. As usual Taito has done a great job on the packaging. You can always count on Taito using vibrant colors and detailed illustrations on their boxes.

After getting the Queen Emeradas out of its box, you have to install two small wings on the left and right sides, hardly a challenge. 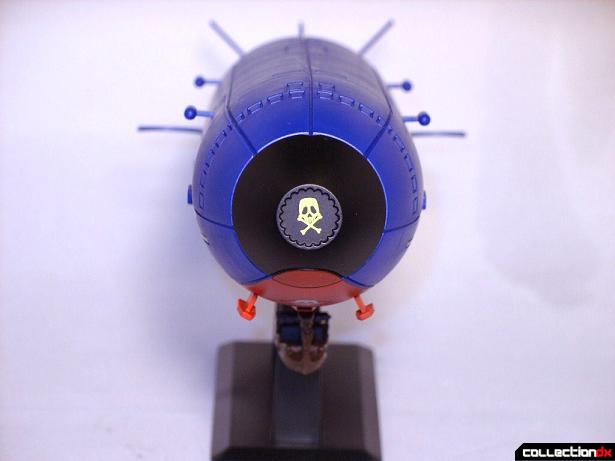 The Queen Emeraldas ship is much smaller than Taito’s Yamato and Arcadia. It’s length being only 30cm or about 12 inches. The ship is comprised from quality plastic and ABS. 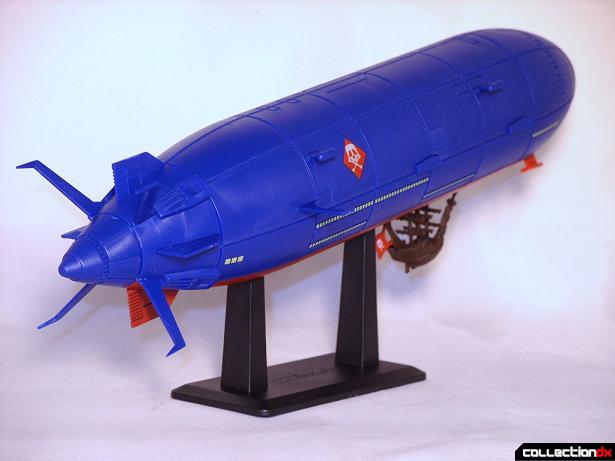 Unlike previous entries in this collection, Queen Emeraldas really lacks paint detail and gimmicks. However, it does have a small 17th century pirate ship slung underneath it's hull. 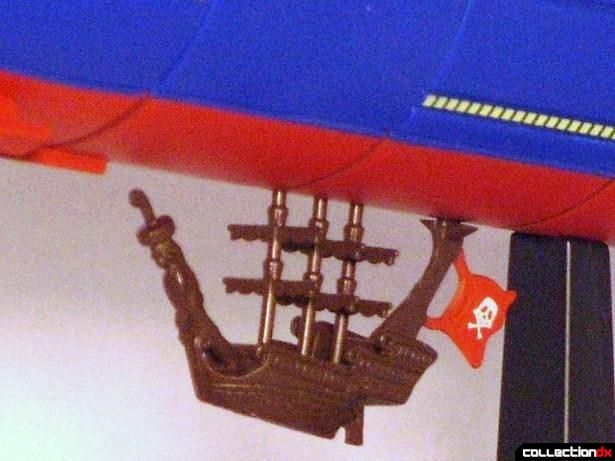 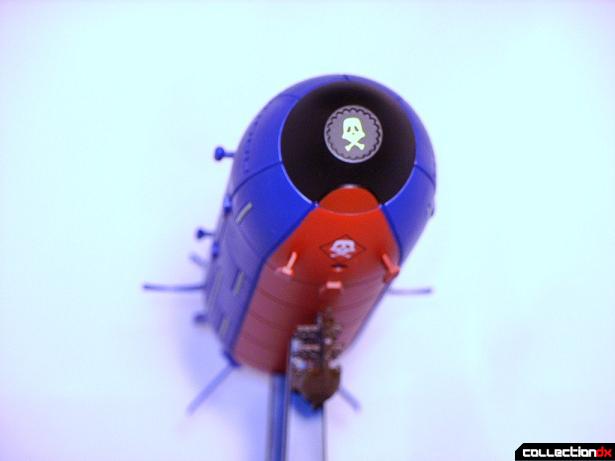 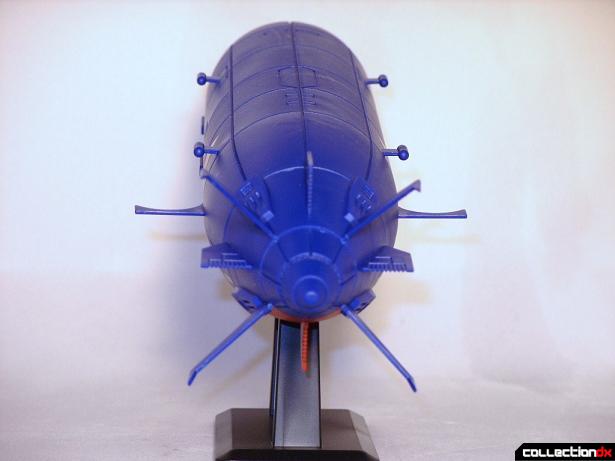 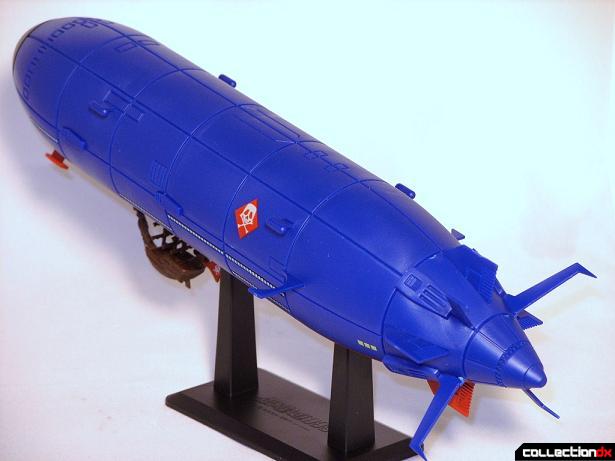 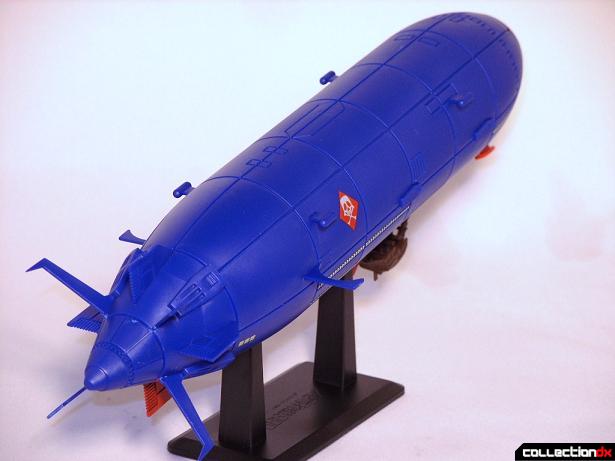 I have to say that I was expecting a little more "bang for the buck" from this toy. I know, I know, its a prize toy, but I was not impressed with it. It is really nothing more than a fixed pose model with no actual play value. I truly had high expectations after reviewing Taito's Yamato. Its hard to believe that this is from the same Super Mechanics line of toys. My opinion, at the original cost of $15.00 USD, its hardly worth it. I would pass on this “Hindenburg” unless you are a really dedicated fan of Leiji Matsumoto.

I think you're missing a *big big* part of the appeal of this piece: this is the only version of this ship in this large scale other than a model kit, and if you own the other Matsumoto ships in diecast, this is your only option in a similar scale for the QUEEN EMERALDAS. Your only other option before this was a poorly detailed resin version which is more based on the 1998 OVA QUEEN EMERALDAS than the much-more popular GE999 MOVIE this is based on.

you say you're disapointed with the ship, because the other ships were a better value which, based on your review, sounds like you liked them because they had more moving parts. Maybe you just don't like the design- which is fine, but for some people the moving parts and gimicks on this ship don't matter at all, because the ship didn't have any gimicks in the animation.

well this design has exactly 0 big guns, 0 fold out wings, and 0 movable barrels. This is because the *design from the movie* didn't have them. It's hardly fair to knock this toy because it doesn't have the movable parts of the others- it just doesn't need them. It's like getting mad at a Stormtrooper figure and saying he's a rip-off because he doesn't come with a lightsaber and robot arms.

I think that you would be less impressed with the other toys if you handled or owned the amazing DIE-CAST versions of the same ships.

You can't compare the prices though- diecasts for $100+ or these for much less.

I think its also important to note for posterity that these toys are *more* than $15 for most buyers unless they live in HK or caught the HLJ pre-orders. They're on Ebay and at brick & mortar shops for an average of $25-40 a piece at the time of their original release (2007-2008) So keep that in mind- they aren't *really* $15, as most shops are marking them up due to their popularity (especially the yamato).

Haven't held this one yet, but I'm inclined to suspect the same. I'm sure the toy itself is probably fine, but the design is just lame as can be.

Hey Big R,
You bring up allot of valid points. I first would like to say that I love the design in concept. In my opinion I feel that Taito could have executed it better. Paint details as well as cool features are both lacking in this model. Again this is only my opinion. You may look at the pictures and want to go out and get it. I just think if you get the other releases, and compare, you will be disappointed.

I swear the Taito series start to growth on me. The price and the quality amaze me!

They've done a 999 train and a Cosmo Zero is next. They do some Harlock props too. All at the same price.

They're great if you find them, it's just tracking them down that makes them a bit rare.

I bought this model ship for $25.00 from HLJ.com (1500yen plus shipping) and I have regretted my purchase decision ever since.

Although this maybe the only big scale Queen Emeraldas ever created, it is still a very bad toy/model.

First of all, there is no reason this is only 30 cm long. The overall shape of Queen Emeraldas is simple enough. The ship’s rear end can easily be made into a detachable part to extend the overall length to 40 cm. But they chose not to do it.

The overall shape is also wrong; the “real” Queen Emeraldas should be longer and narrower. The overall paint applications are too simple and boring.