SDX Gundam is a line of some of the more obscure SD Gundam characters that older fans may recognize from the old OVAs from the 80's and 90's. The first character in this line is from an old SD Gundam short known as SD Gundam Gaiden. 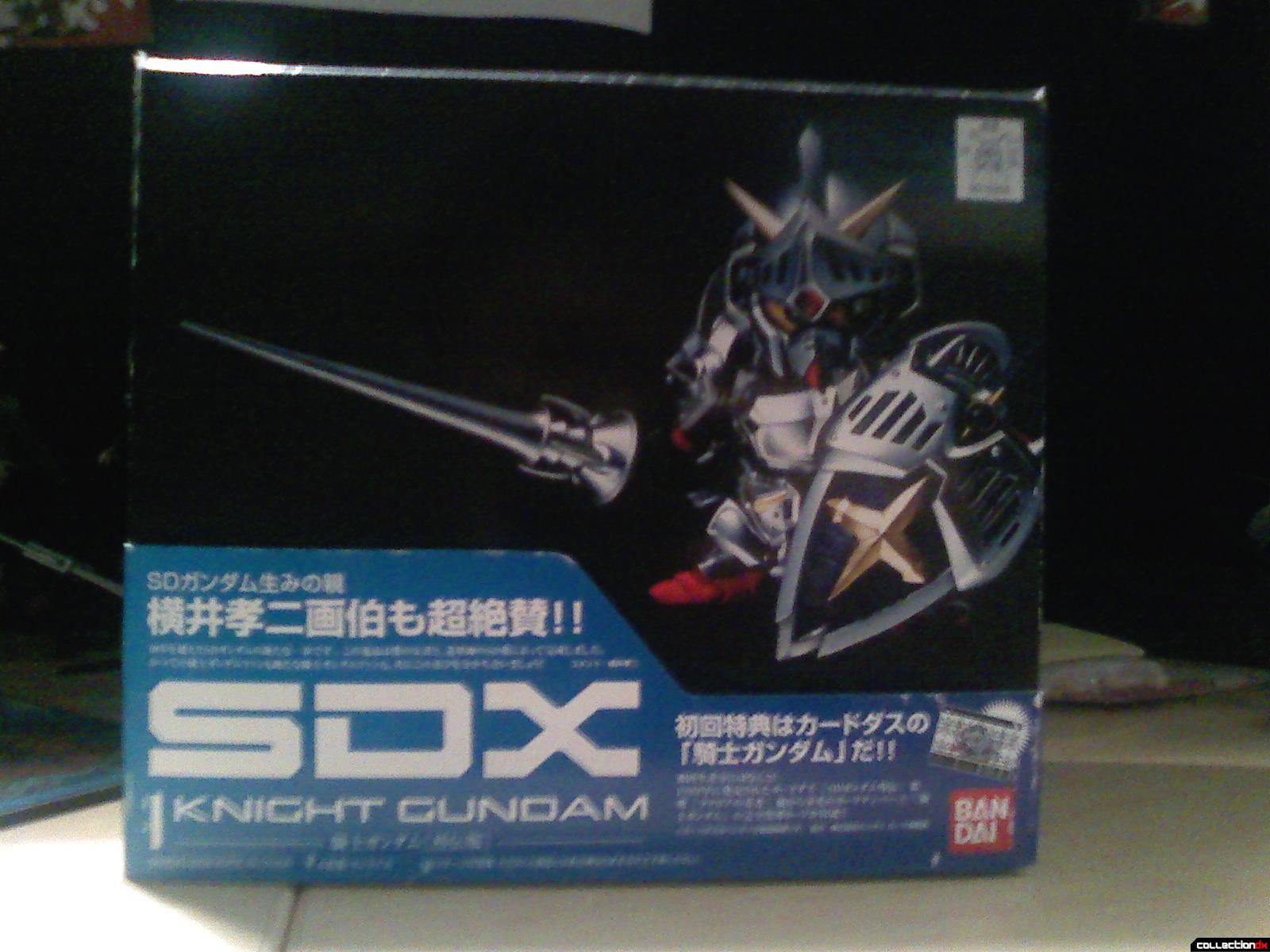 SD Gundam Gaiden is like the opposite of the Musha SD Gundam World, where instead it focuses on medieval characters and has many mobiles suits in suits of armor or based instead on dragons and other mythical creatures. If you remember the anime SD Gundam Force, the world which Zero the Winged Knight was from, Lacroa is loosely based on a similar setting. 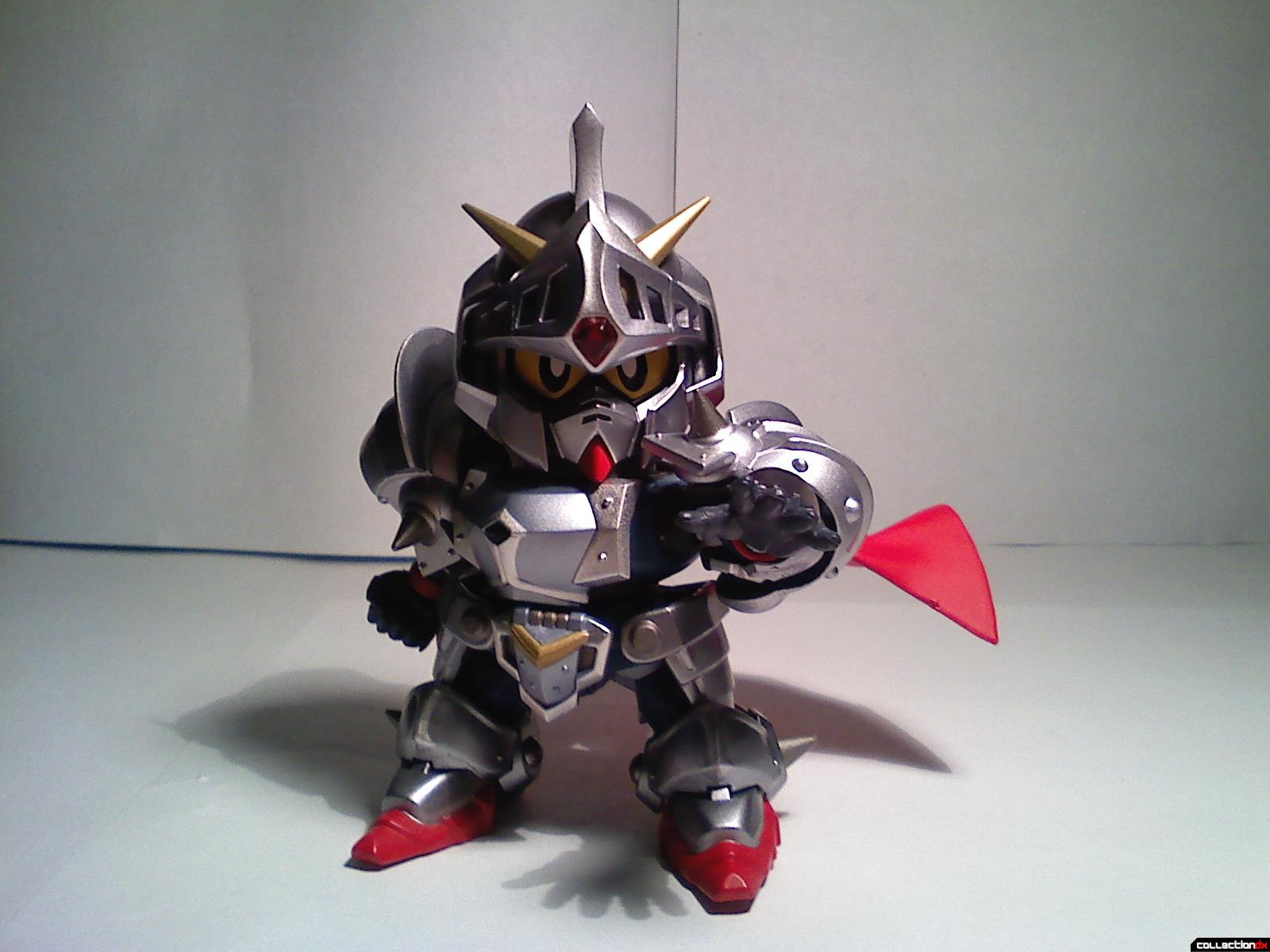 Knight Gundam is the main character of this OVA and his appearance in figure form is extremely accurate to his on screen counterpart. He really does look like a sterling knight from days long past... Well, as sterling as a miniature robot with big eyes can look. 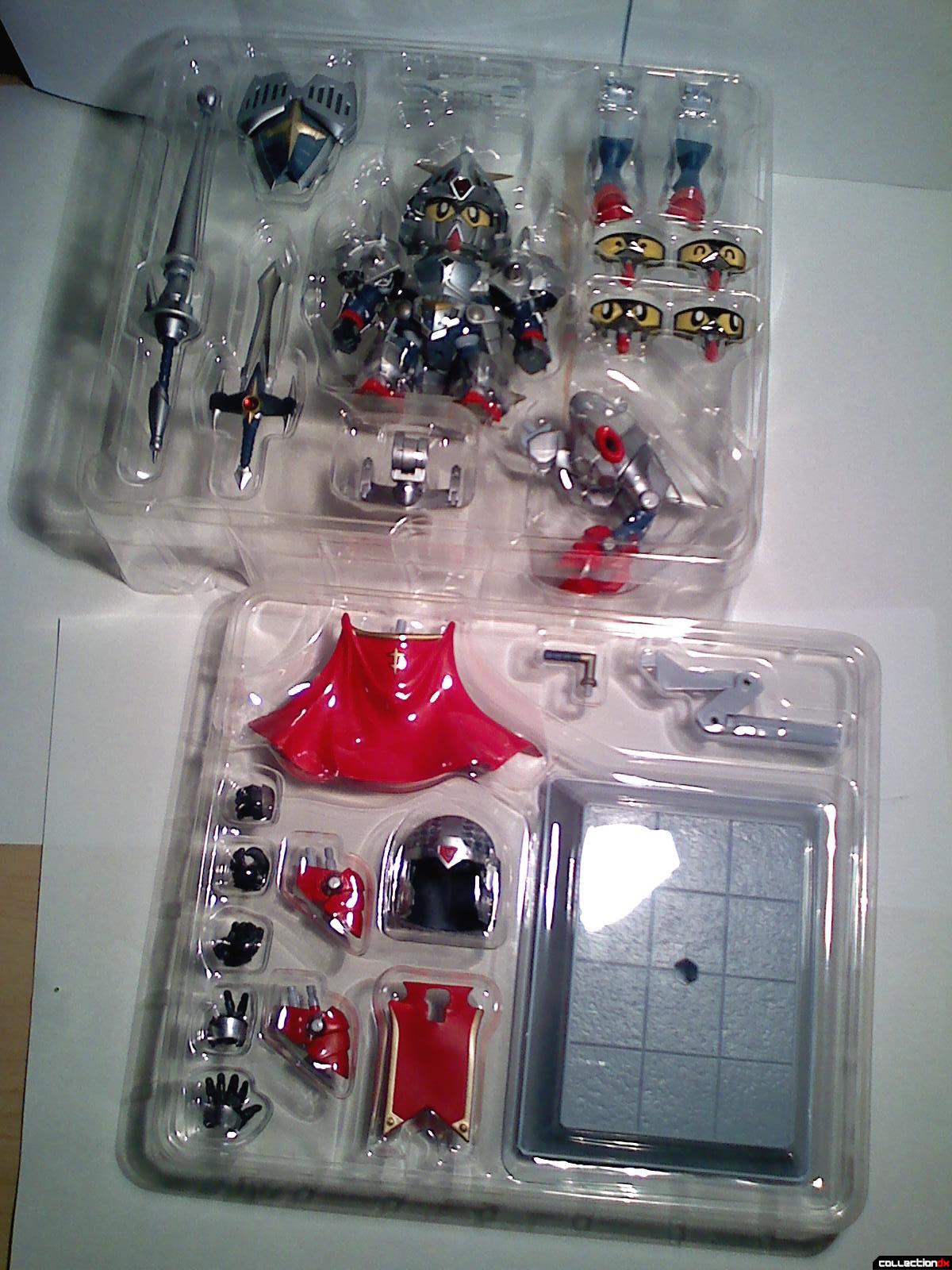 The first thing to note about this guy is that he comes with a LOT of accessories. Two trays worth! He has several hands, different eyes, an alternate helmet, two swords, a shield, a cape, a stand, and an unusual pair of legs... 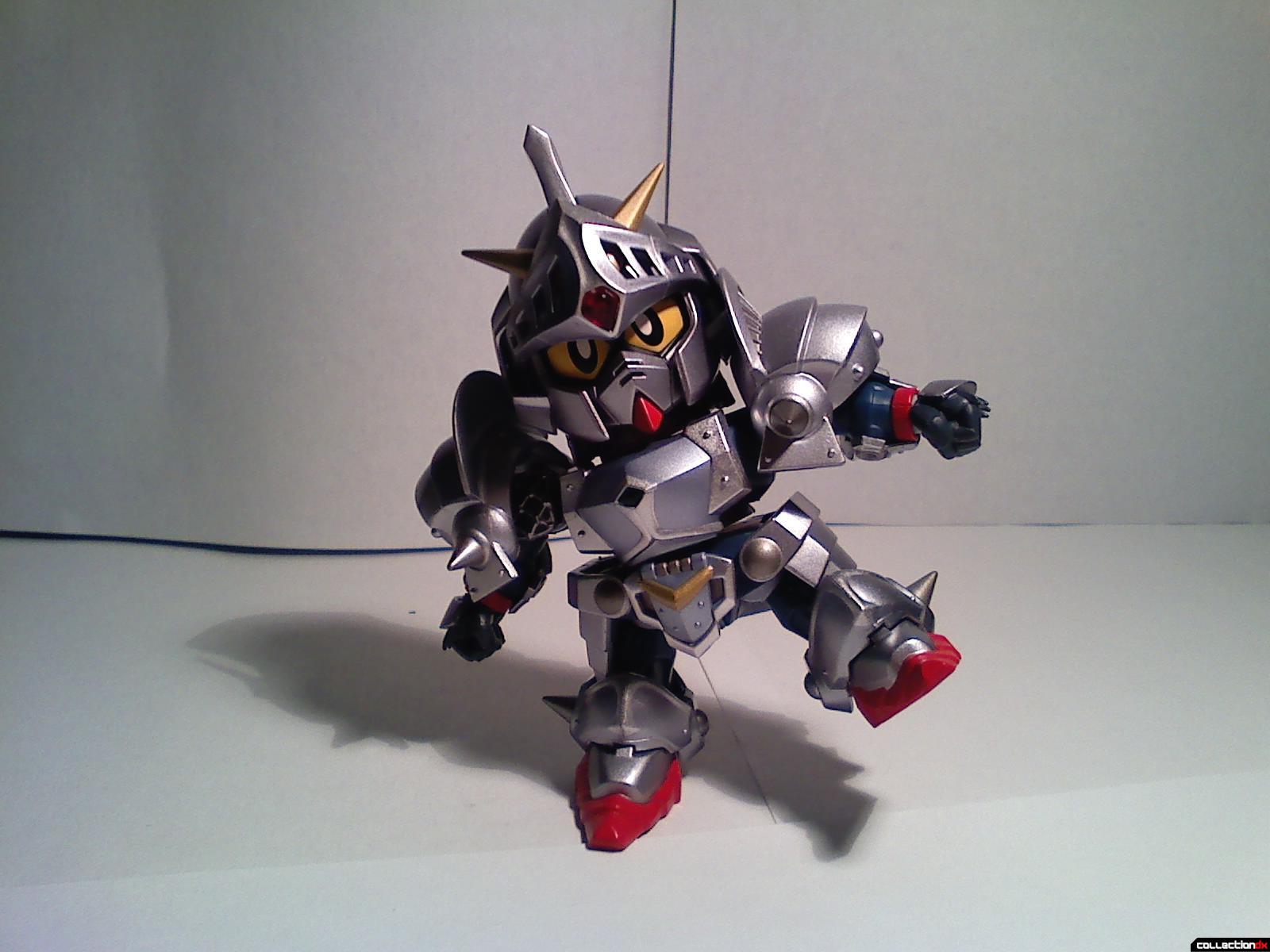 Poseability on this guy is about the same as any SD Gundam kit. The arms, hands, legs and waists move on ball joints while the feet and head are on swivel joints. While I think it may have been possible to put in a small elbow joint into the arm, it would have been slightly useless due to the stub-like nature of SD arms to begin with. 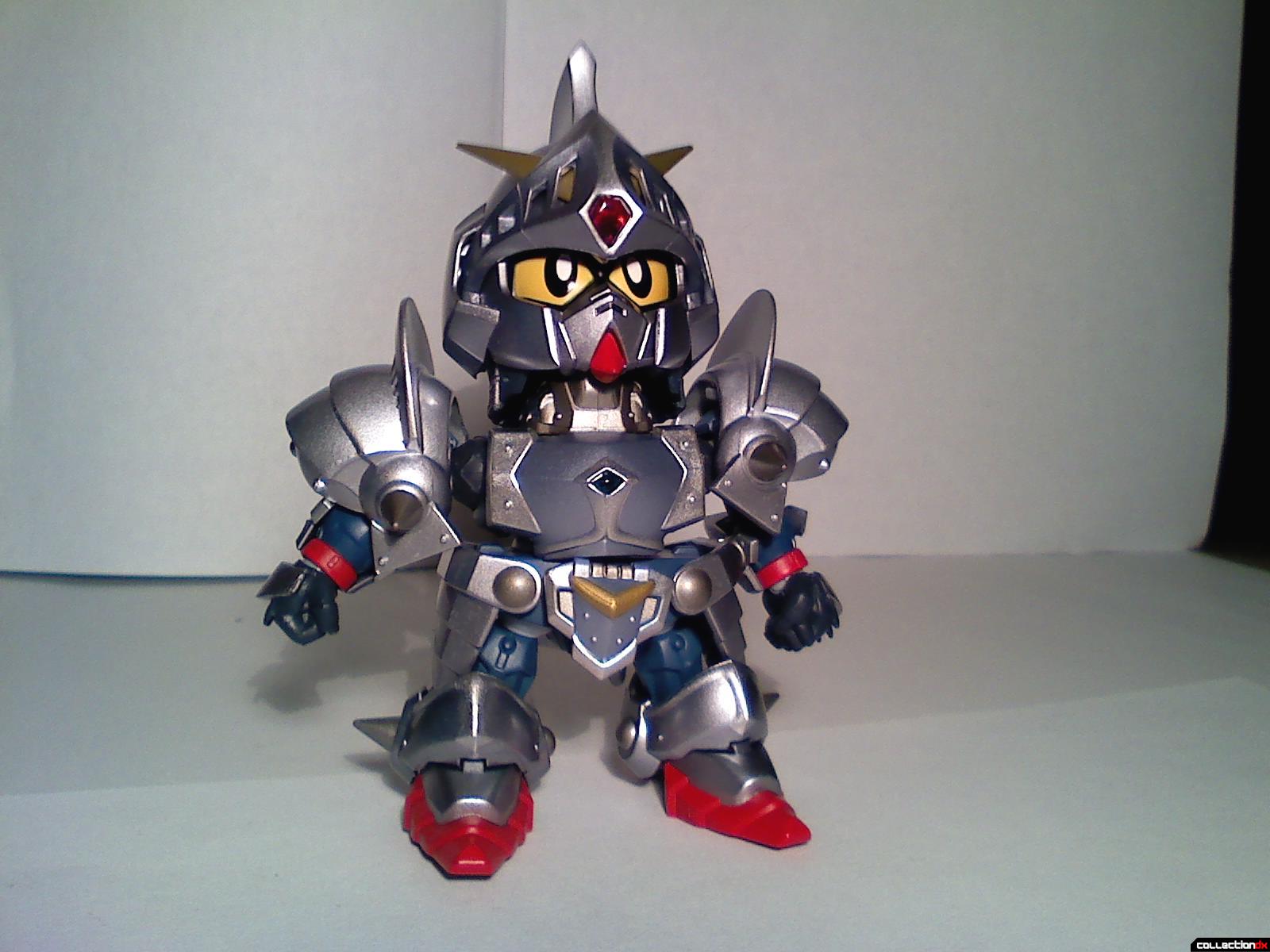 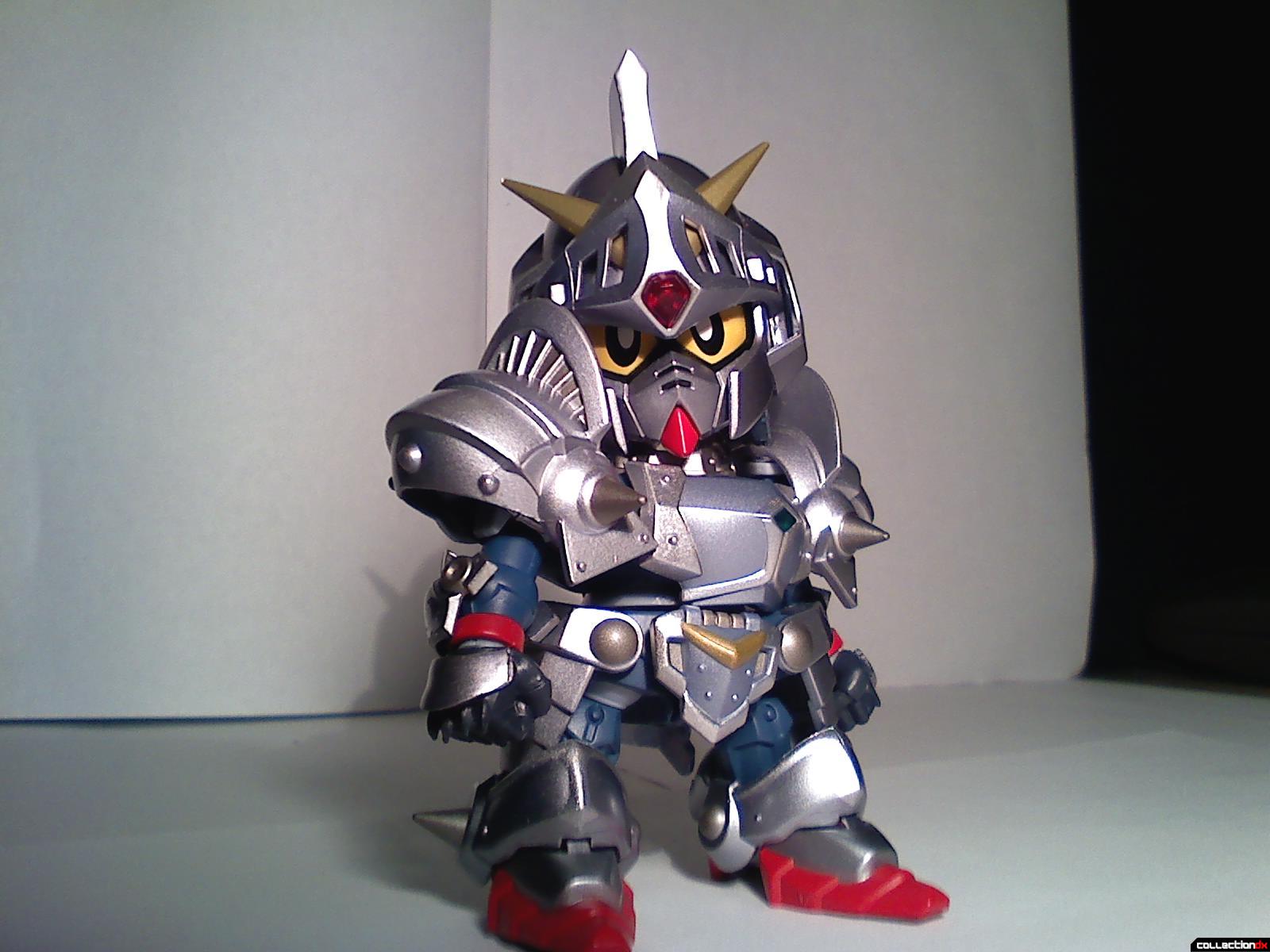 The head joint on Knight Gundam is fantastic. While the actual head is attached by a ball join, there are mechanics inside of the head piece that allow him to look up, down, and even tilt his head slightly. It's quite a nice bit of design work that I just love. 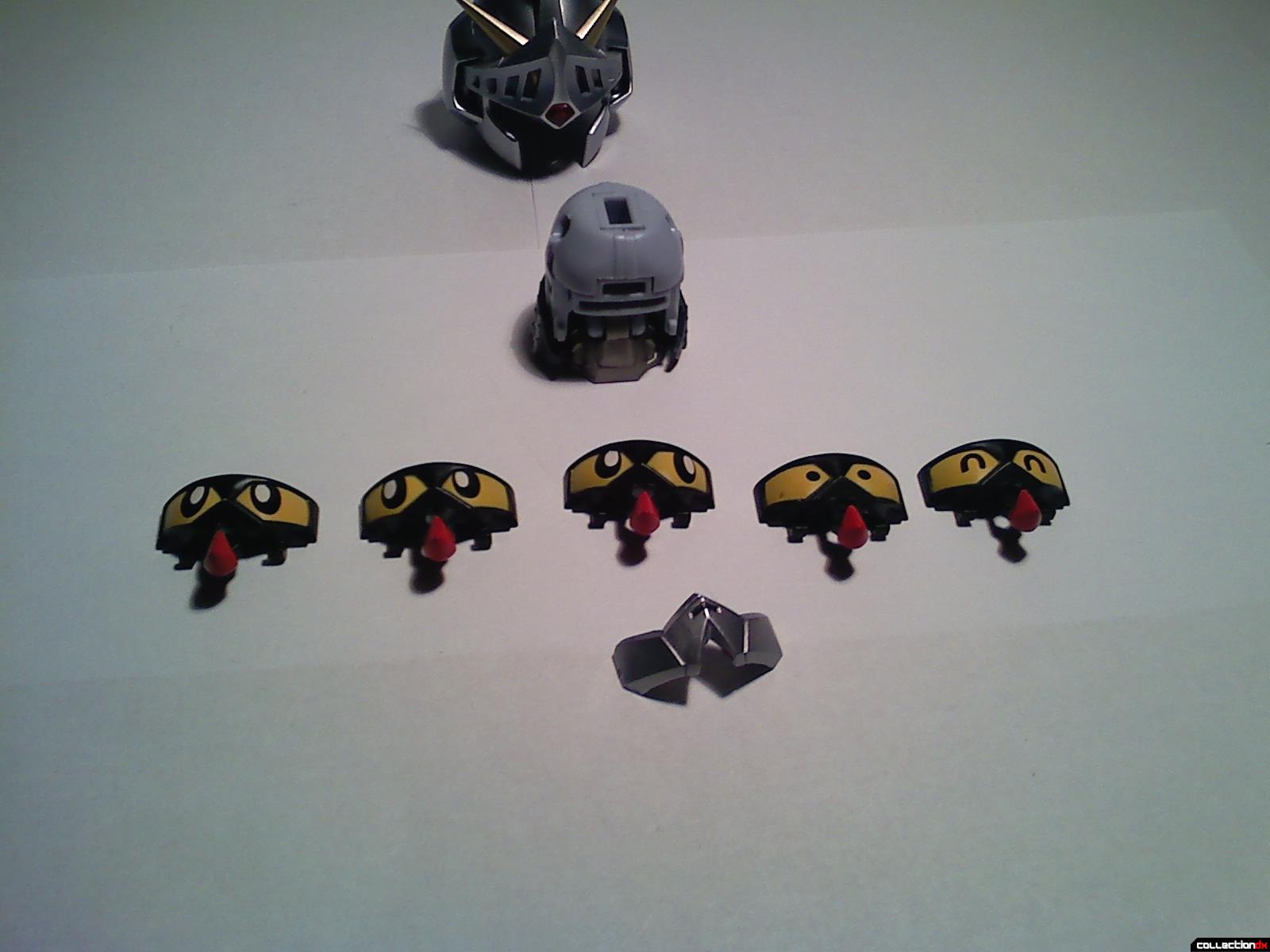 Swapping eyes is easy enough. All you have to do is remove the helmet and pull of the entire face. The mask will come off as well and then you simply peg in the other eyes. You get eyes that look straight, left, right, happy eyes, and startled eyes. 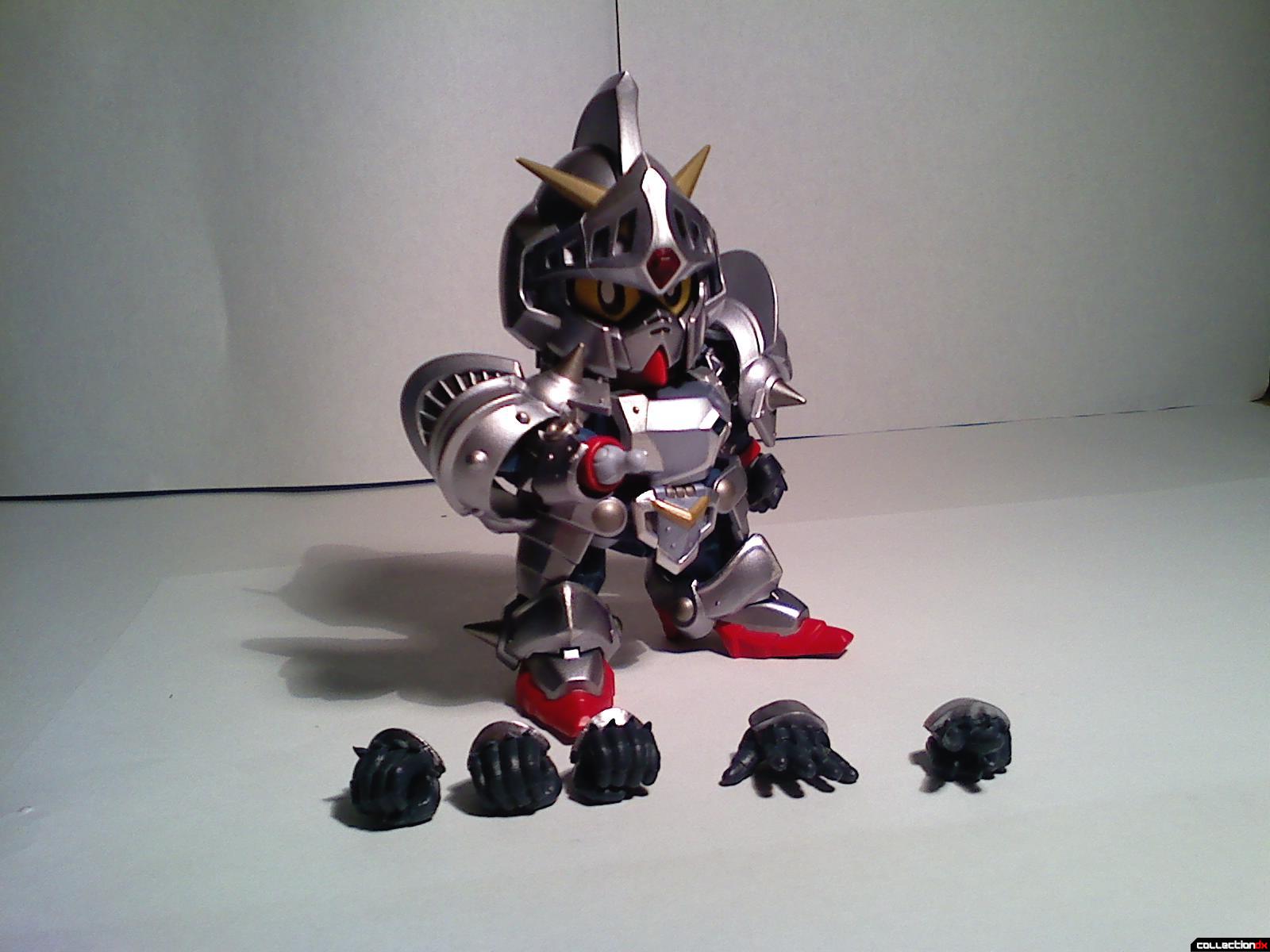 The hands are all on ball joints that easily pop on and off. You have your standard closed fists, open fists for holding things, a more open first, an open palm and a piece sign hand. All of the ball joints are also on swivel joints so you can curl the hands in pretty much any position you want. 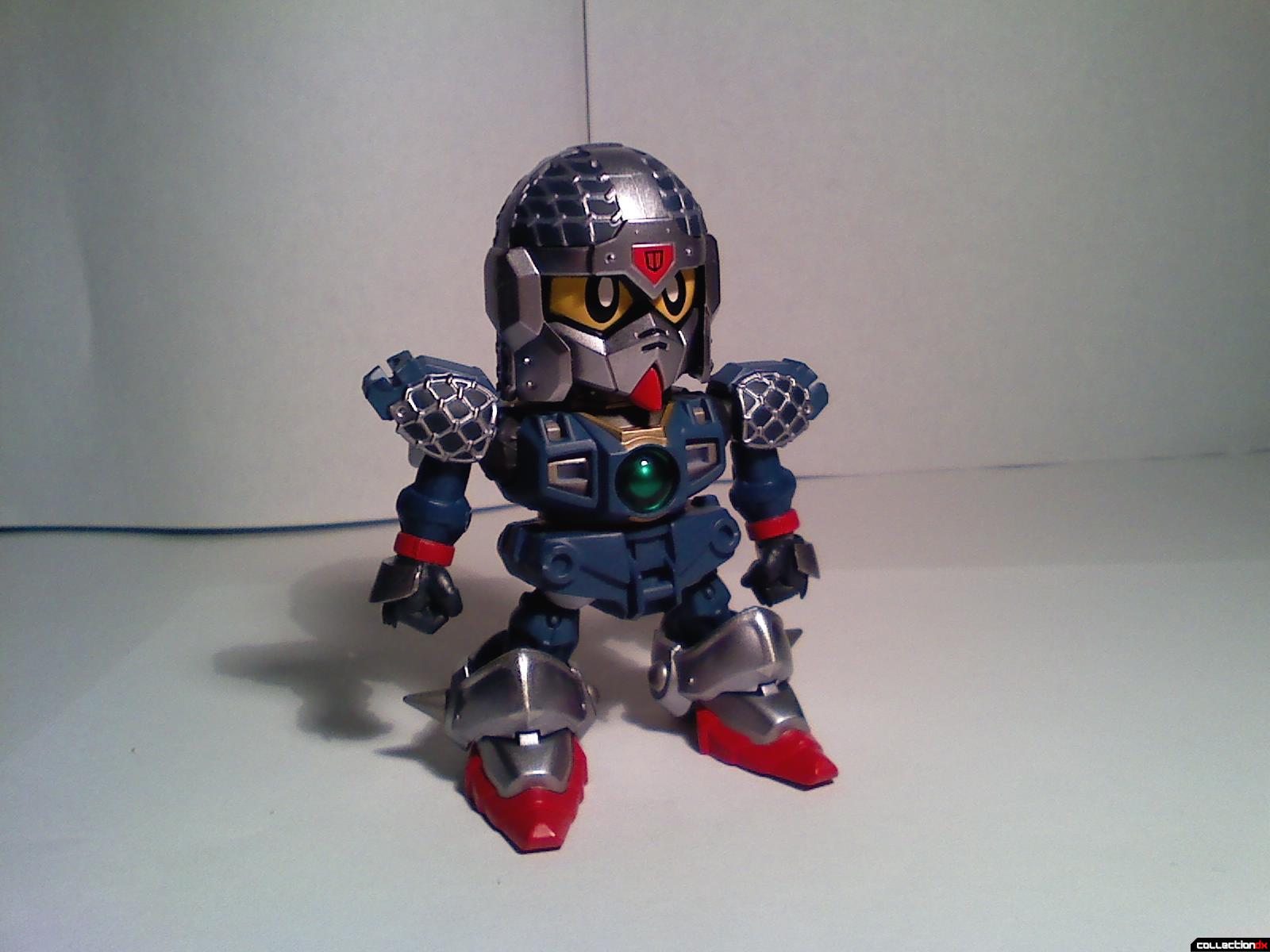 Knight Gundam is covered entirely in armor. It would have been incredibly nice if all of this was metal, but only the shoulders and part of the helmet actually is. But for the price you're paying, I don't think I can complain too much about it really. All of the pieces can be popped off easily and leave Knight Gundam in just chain mail. He even has an alternate helmet to mimic this look. 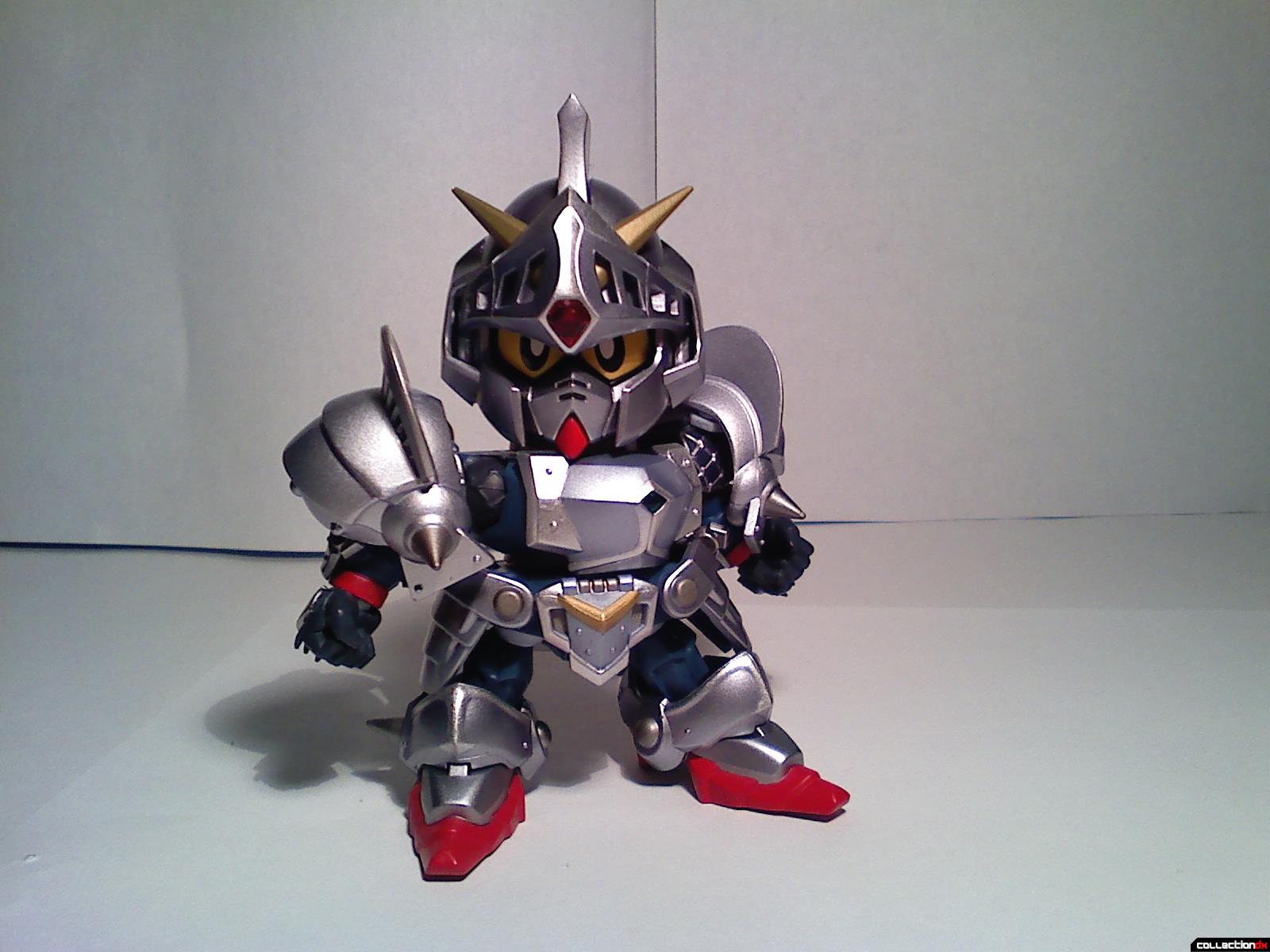 I have to mention that I love these metal pauldrons to death. They are attached with ball joints and have an additional swivel joint that helps to keep the shoulders aligned with the body when it comes to those really dynamic poses with the arms. 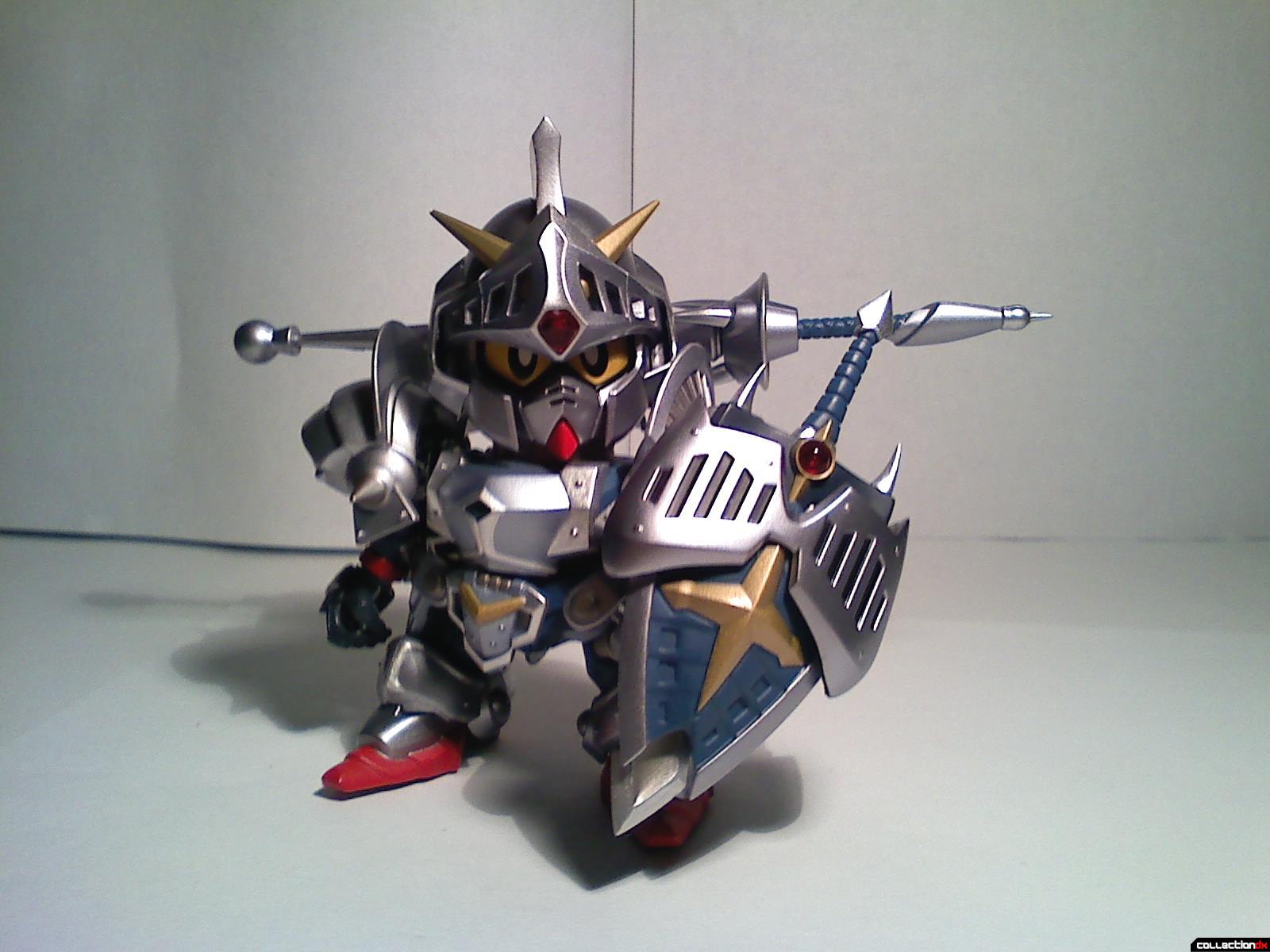 Knight Gundam comes with a lance, a sword, and a shield. The lance has a spring inside that actually lets you pull back and hit random targets. It's kind of hard to do though because of the small size of it. It's a silly gimmick, but a nice touch. The lance can also be stored via a clip that goes into the back of the helmet and fits in snuggly. 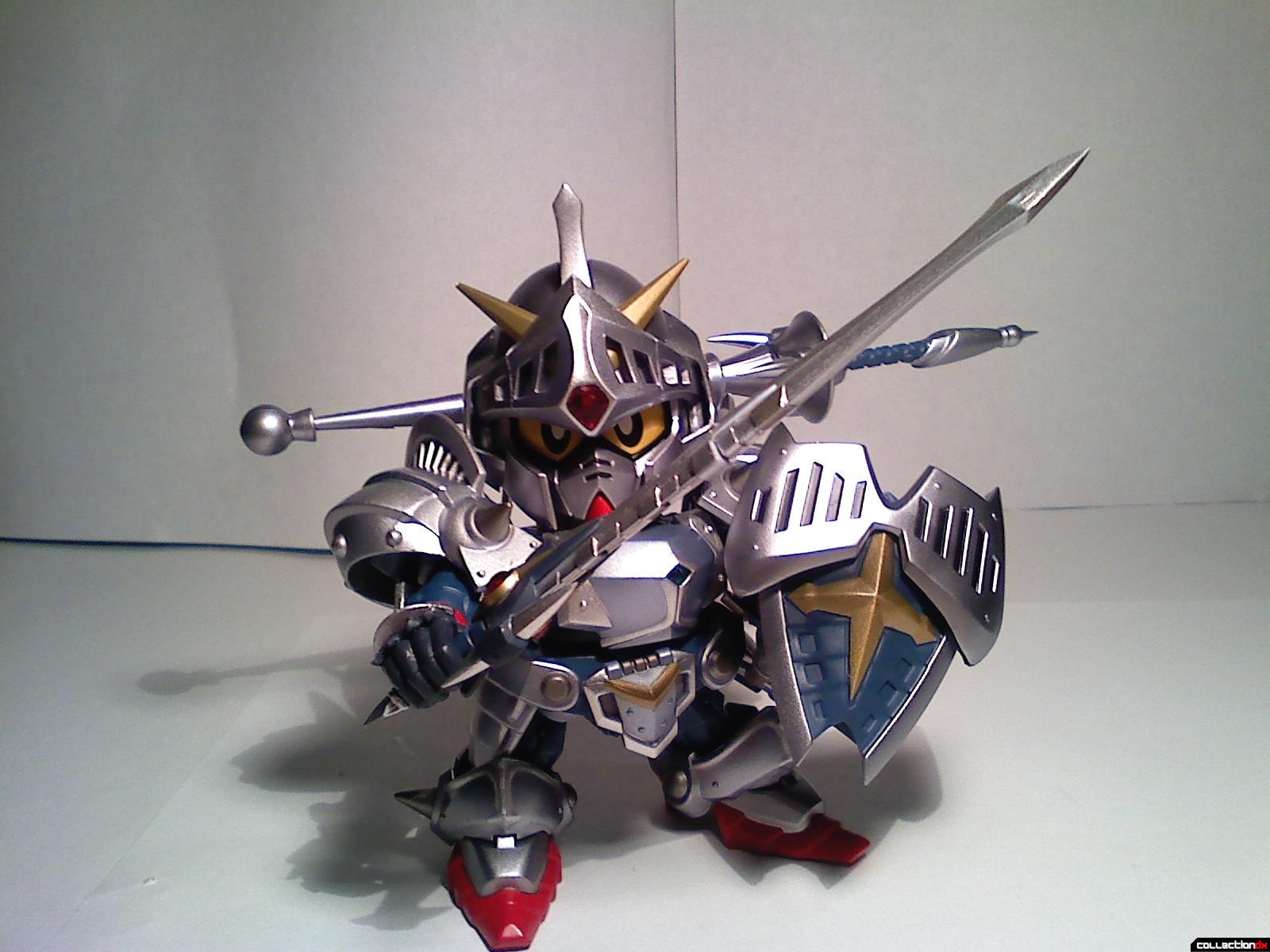 The sword and shield is very nicely designed and are a very nice pair. The sword slips in easily into the shield and stays in place. Also if the sword seems a little stocky for your liking, you can actually pull the blade off of the hilt and use an extension piece to make the sword even longer and quite frankly a bit terrifying when cute little Knight Gundam holds it. 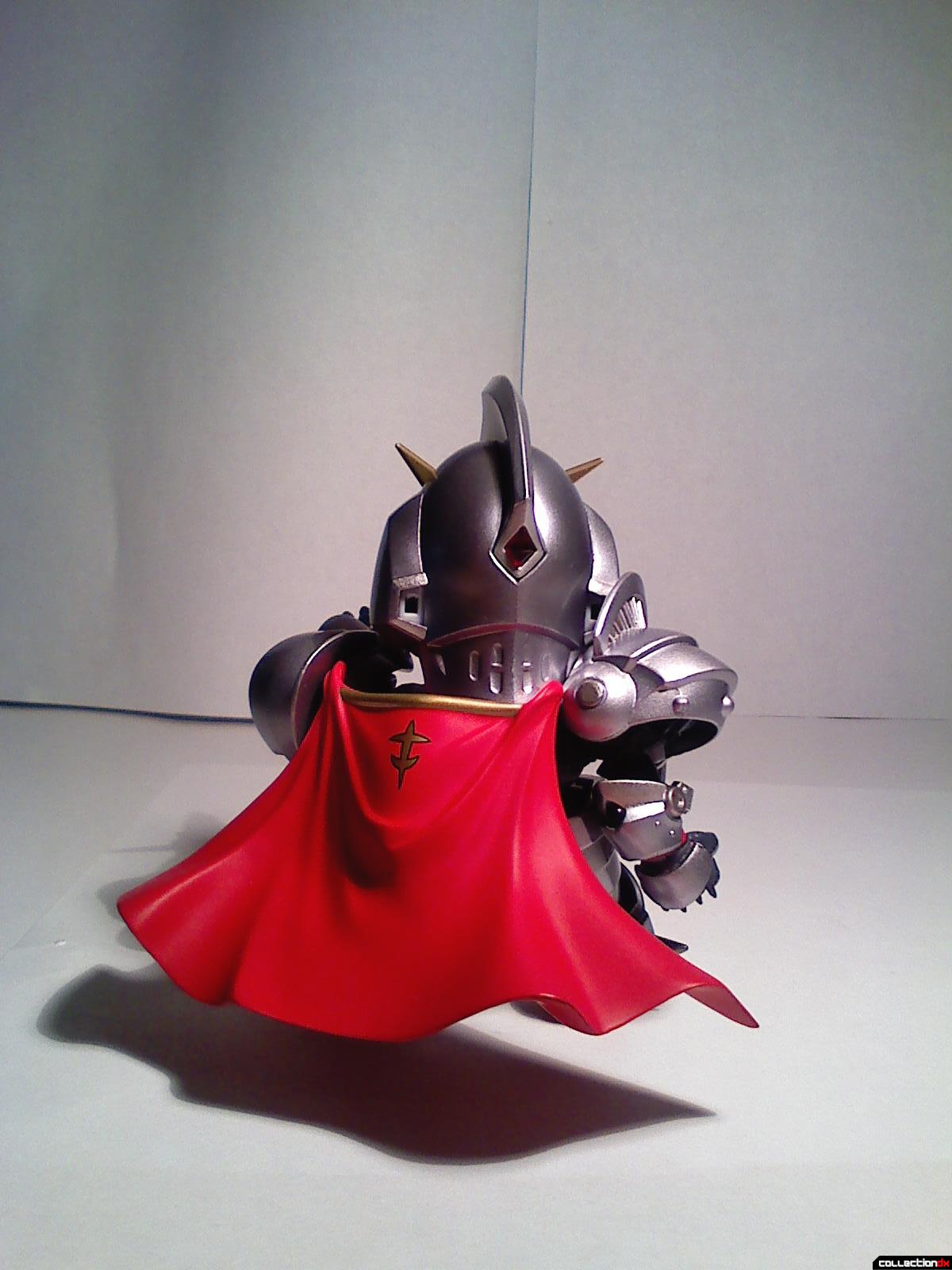 Knight Gundam's cape is on a ball join attached to a peg that goes right into the back. It can turn and move easily to whatever direction you want the cape flapping in. 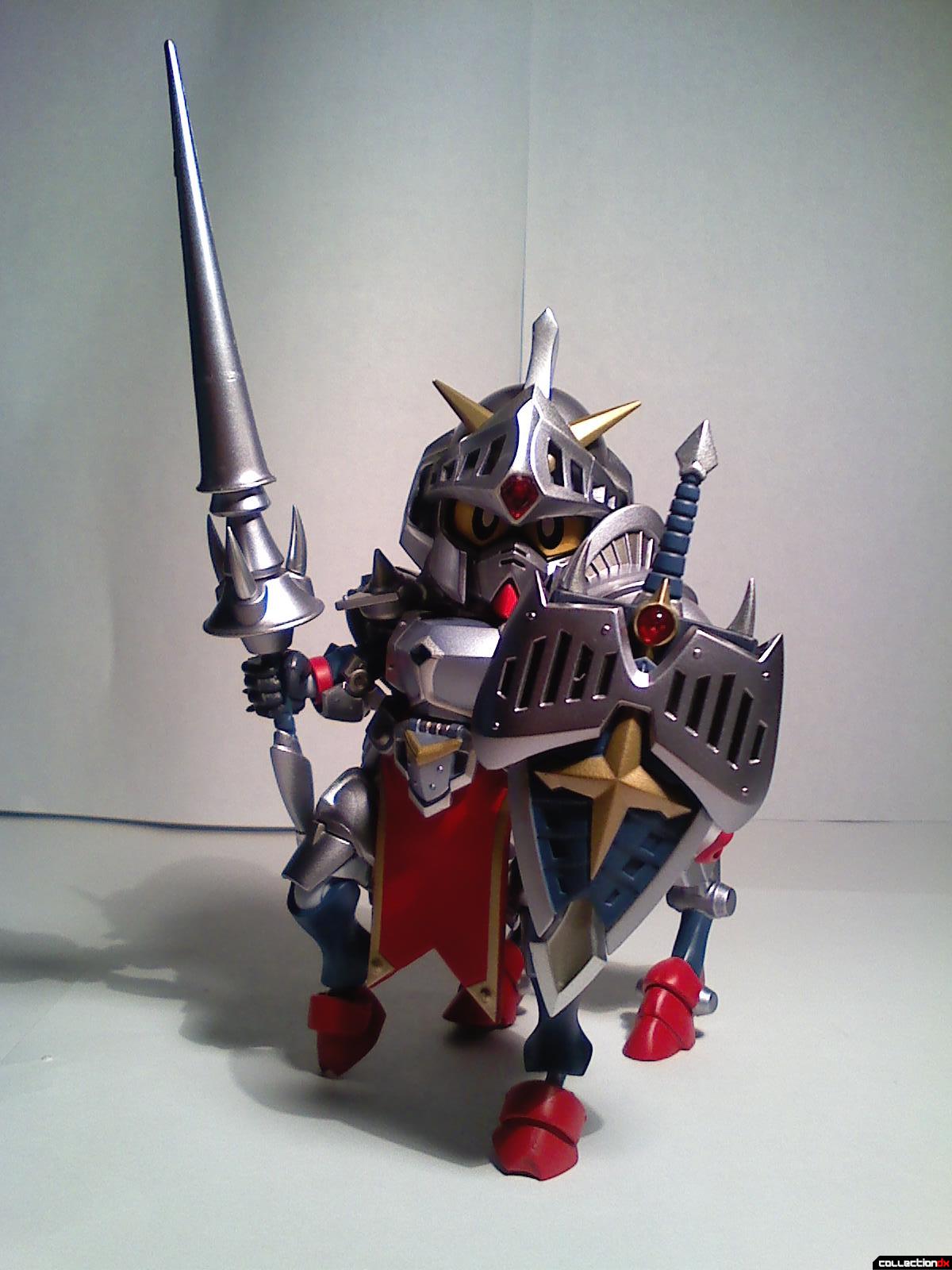 Knight Gundam has one final gimmick, and it's a big one. With a little bit of part swapping, you can pull his legs off and switch them out for horse legs to turn him into a centaur... Gundam. It's a pretty cool mode and Knight Gundam does look pretty majestic like this. But you can't really pose him past just having him stand in place without the help of the display base. 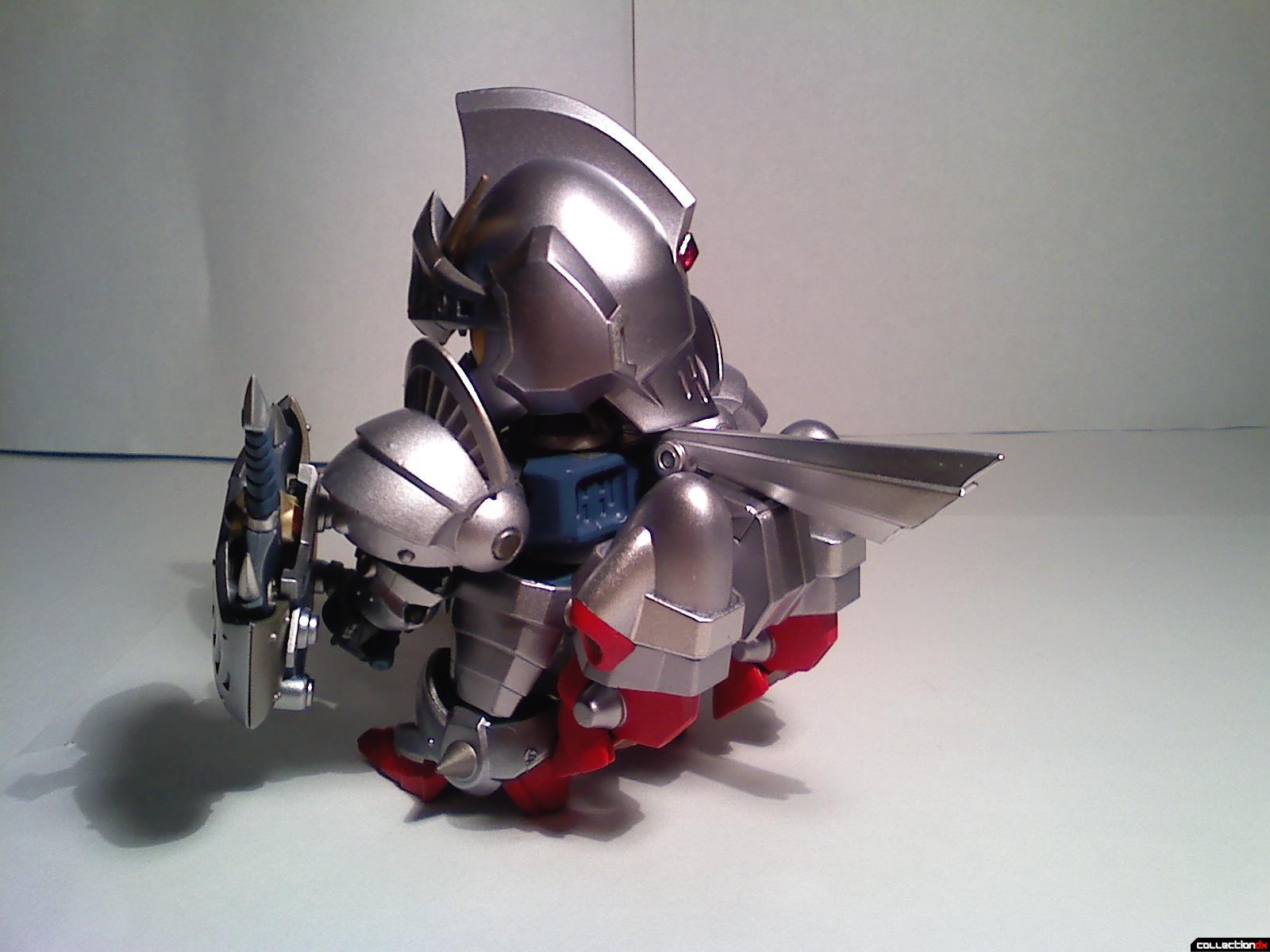 If you also want, you can fold up the rear legs and make a backpack of sorts. 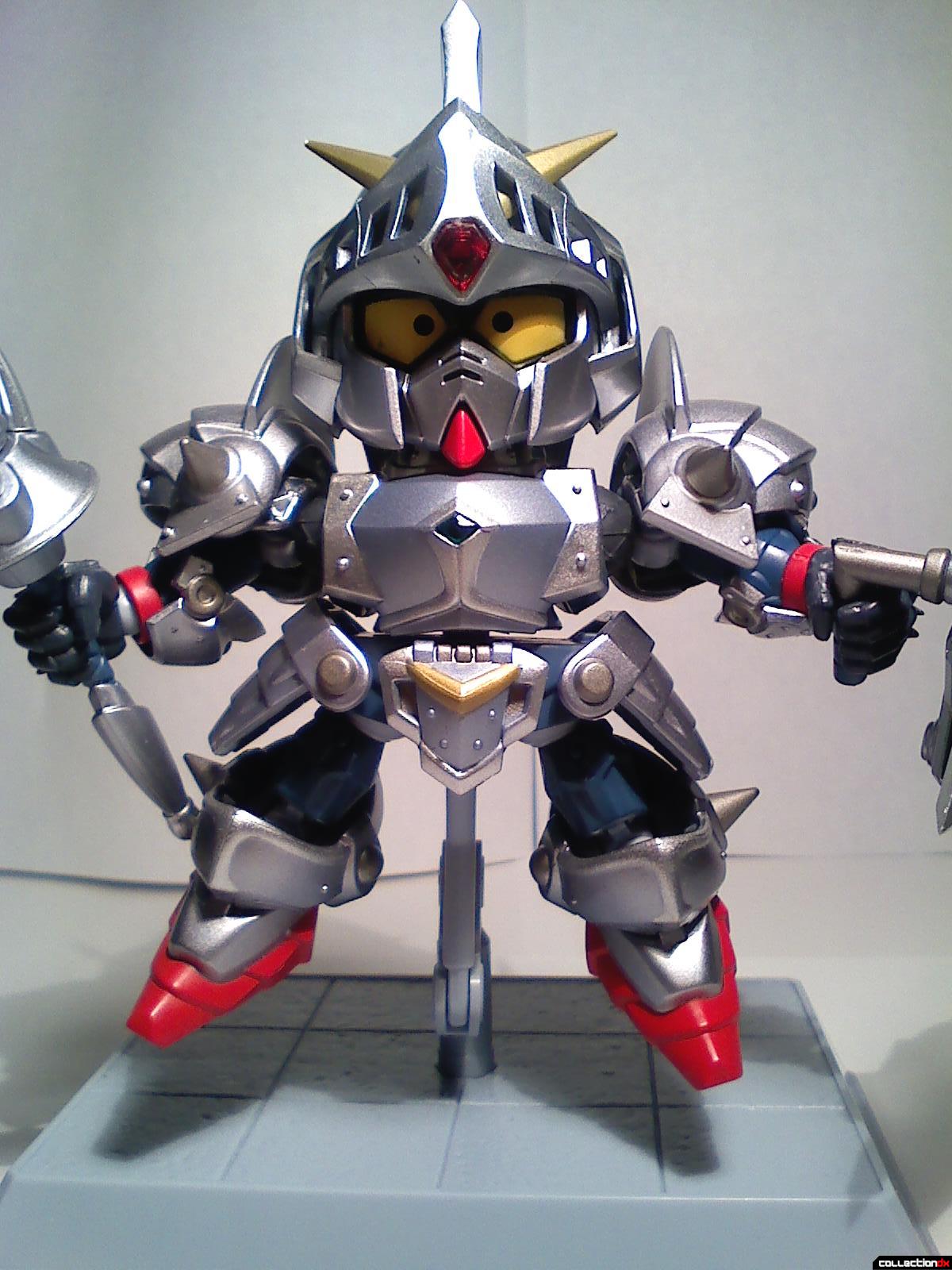 Knight Gundam's stand pegs between his legs and keeps him secure. However the actual design of this stand is sort of unusual. It's not jointed to allow Knight Gundam to actually be standing on the base. It's an odd design choice and just makes me wonder a bit honestly. 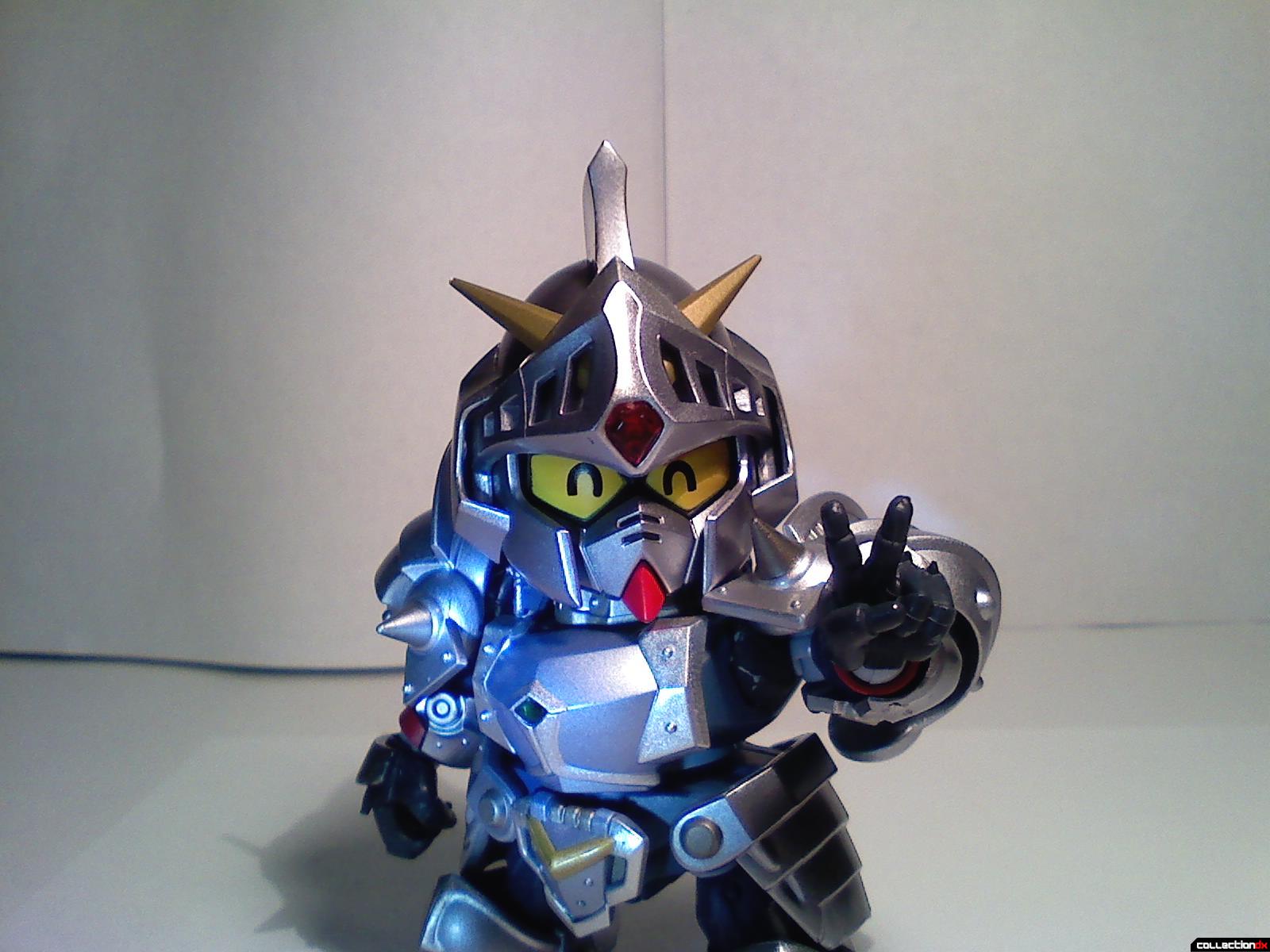 I think that for the price you pay, you get so much from Knight Gundam. The SDX set is very solid and has more than enough accessories to leave me fiddling with this guy constantly. However I'm aware that the SD design may not strike everyone and others may just flat out hate it. But if you're a fan of these designs and want something a little more substantial than a model kit, these guys are great. Satan Gundam, Commando Gundam, and several others are on the way so keep an eye out for them.

Thanks for this review man!!

been wanting to know more information about this guy ^_^....will put him on my wanted list.

(Question:How tall is this SD gundam?)

He's a little short of 4 inches.

I'm not a big fan of the SD style, but if there's seriously a "Satan Gundam" I don't see how I can avoid purchasing one.

Yeah,seriously Satan Gundam seems like something I need to own. Peanut butter and chocolate!

Are you sure the stand won't let him stand? it looks like there's a joint there.

Yeah. The picture I have of the stand is as far as it goes.

Gotta admit, this is pretty groovy!

I'm not a big fan of the medieval European motif, but as far as the construction and quality of the toy goes, it sure seems solid.

I'd pick up others in this series if they did actual One Year War mecha (provided the series continues past the first few releases!). In fact, I'd kill for one of the marine Zeon suits done up like this!