Kanegon is one of the most iconic Ultra Kaiju. But what is his story? 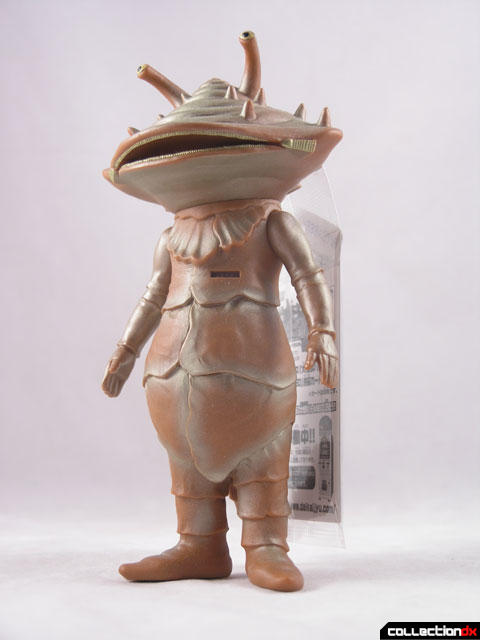 Kanegon first appeared in Episode 15 of UltraQ, the predecessor of Ultraman. In it, A small greedy boy named Kaneo finds a change purse which is actually a cocoon. It sucks him up, and when he wakes up, he turns into Kanegon! The physical form of Kanegon is a monster with a change purse for a head (notice the zipper on the mouth) and a counter on his chest. Kanegon now needs to eat money to live (3,510 yen a day, to be exact), and if the change counter on his chest reaches zero, he dies.

The story is more of a fable than anything else. Despite making very few appearances in the Ultraman Saga, Kanegon has become a very popular kaiju and is one of the series most iconic characters.

The toy is a basic Bandai modern soft vinyl, sold on with a tag and card. This, like other recent Ultra Monster releases, comes with a card for use with the DataCardass game system. 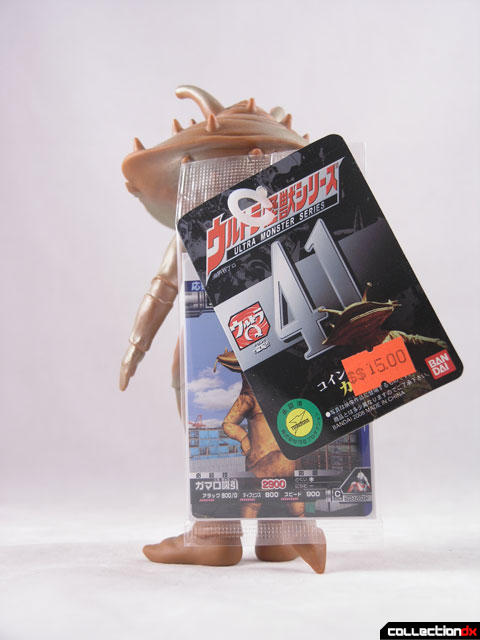 The figure is soft vinyl, with articulation in the head and arms. Cast in Brown vinyl, paint decoration is minimal with gold and black paint. 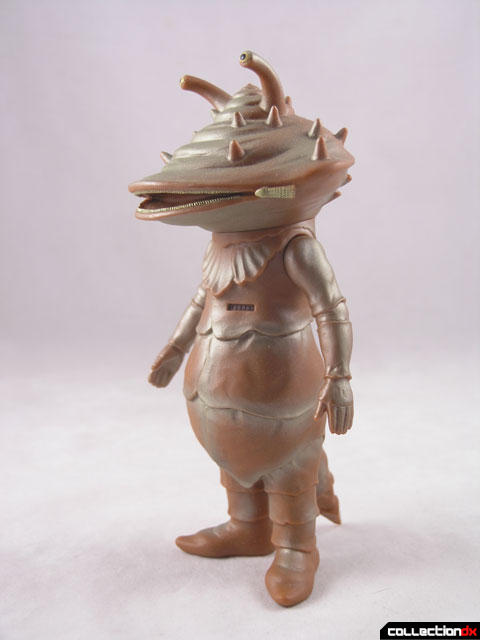 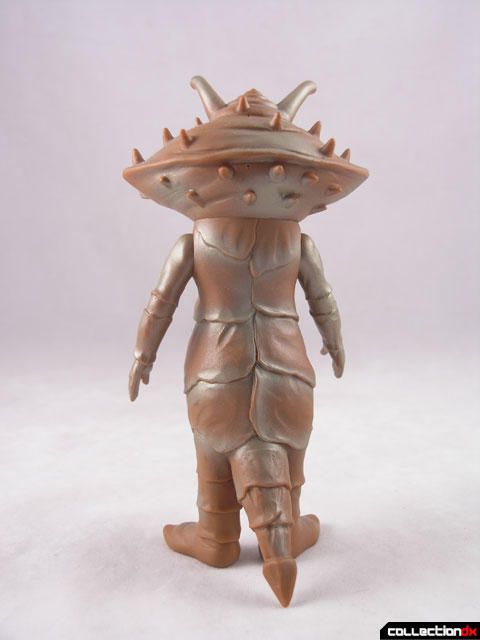 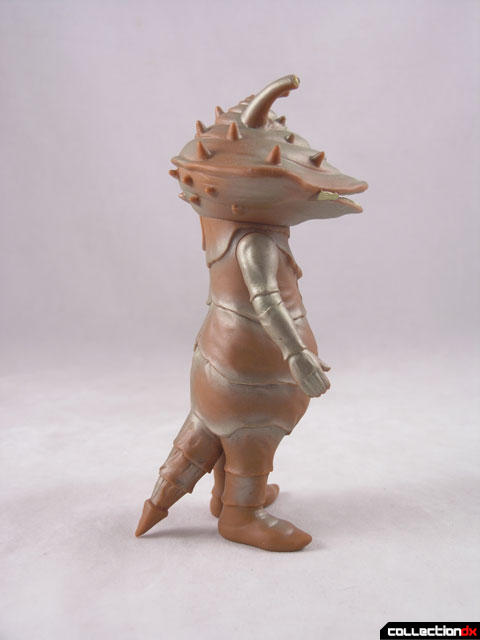 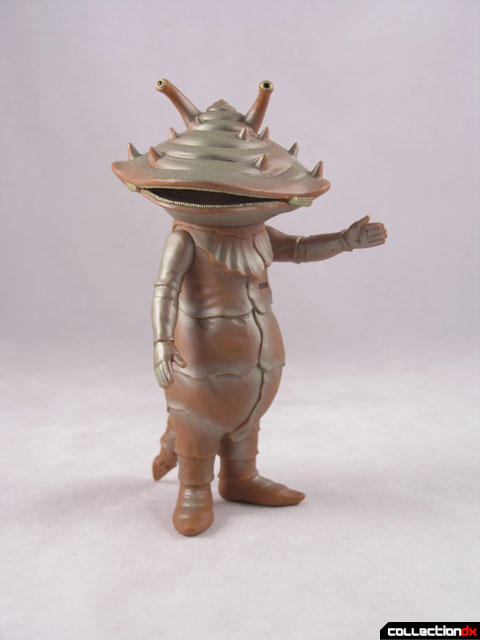 The details are sharp, with the nice accents on the zipper mouth and the chest counter. It's really nicely done. 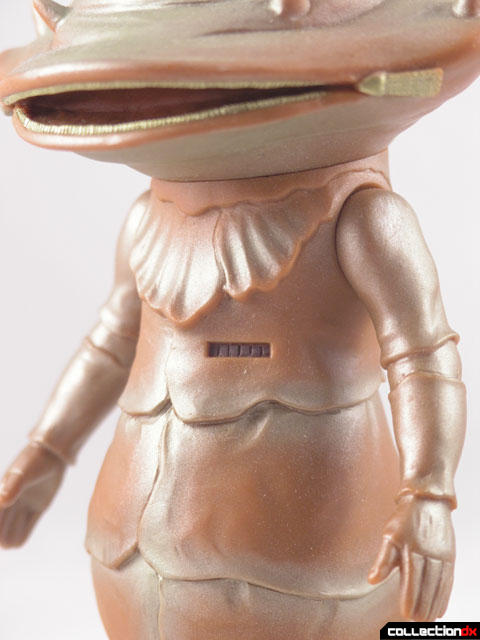 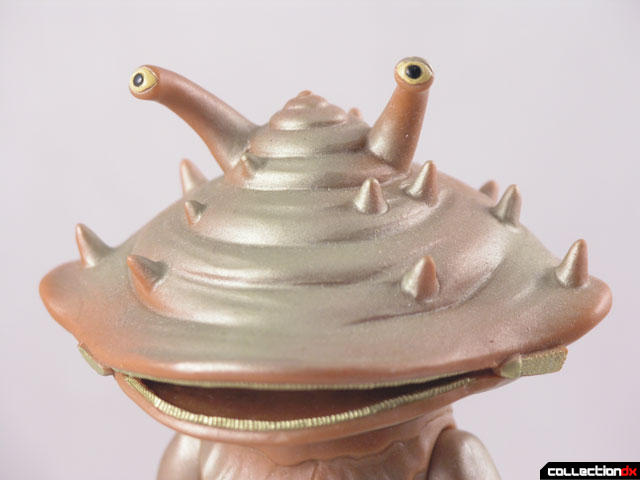 It's a cheap way to get a figure that got in trouble for obsessing about money. I'm not sure if Kanegon's lesson is lost on us....

I'm sure it's no coincidence that the Japanese word for money is "kane", either. I've an earlier version of this figure that I picked up at the Toys R Us when we were in Japan in 2006. Mine just has less paint, no DataCardass and different regular card.

What, no Haiku???... I was getting used to the poetry. Now seriously, nice review...

Thanks to MEGALOMAN and SPECTREMAN and CDX, I'm beginning to like these soft vinyl kaiju. I enjoyed every minute of Episode 15 of Ultra Q and now I finally know the origin of the legend of KANEGON. A million thanks. Despite being a monster, he is definitely cute and lovable.

I've been wanting one for my kaiju collection for a while now!

Leo, these Bandai figures are pretty cheap and common, so I assume you can pick one up at a number of domestic comic book stores, online retailers (like Chibi Goji Toys...though they don't seem to have one now), or even eBay.

If anyone really wants to get into kaiju, go to ClubTokyo, click "Search" at the top (without entering anything into the search field), then pick the monster you're interested in from the drop-down character list. Go through the listings and find the sculpt/colorway that "speaks" to you the most. Then, search eBay or Yahoo!Japan [Kanegon] for the one you want. And if you wanna buy from Y!J, contact Tokyobuyers to get started!

I will pick one up next month, I have too many Group Sounds Records with TB ready to be shipped right now! Thanks for the links, as stated above he's too charming for a evil kaiju!!!