I really dig the more ornate designs of the God Cloths of the Saint Seiya series. Not only do they look cool but when the God’s enter the Saint Seiya story big stuff is happening. So the characters are 1) dramatic and b) cool looking. So this time around I am reviewing the latest release in Bandai’s Saint Cloth Myth line, Hypnos. 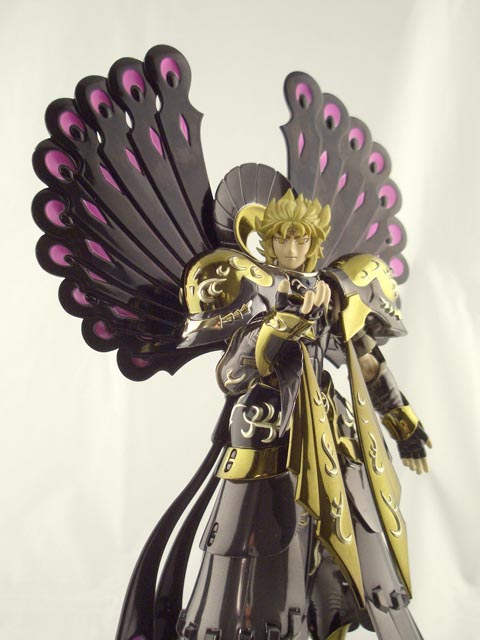 From Wikipedia: “The Greek god Hypnos is the personification of sleep and slumber, and the twin brother of Thanatos, the Greek god who personifies death and mortality. In the Saint Seiya mythos, although he is a subordinate of Hades, the Emperor of the Darkness and ruler of the Underworld, he is a deity with all attributes, and as his lord, he is a sworn enemy of the protector goddess of the Earth, Athena.” 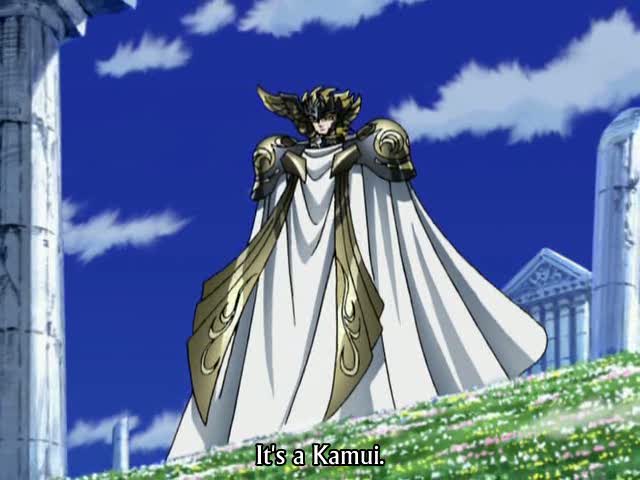 “Hypnos dwelling place is the Elysion, and he spends most of his time there accompanied by scores of Nymphs, and his twin brother Thanatos, waiting to fulfill their lord Hades's bidding. In the same way as his brother Thanatos, Hypnos offered fierce opposition to the Saints of Athena, when they tried to rescue their goddess from certain death and stop Hades's Greatest Eclipse, which was meant to eradicate mankind.” 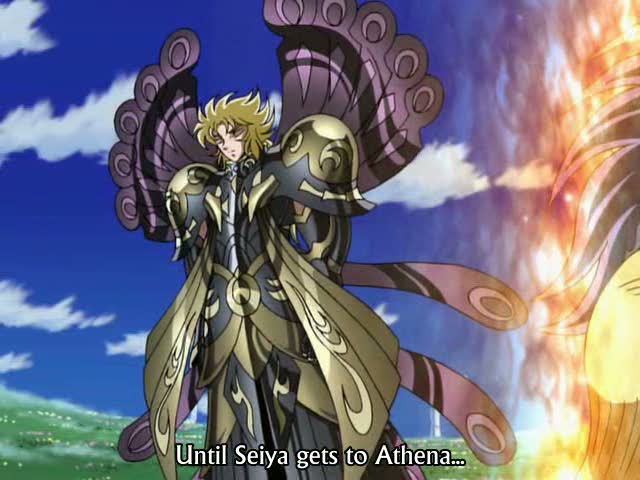 “Knowing that the Saints truly posed a serious threat to him, Hypnos fought back, and unleashed a mighty attack, the terrible Eternal Drowsiness. Hypnos stated that he hated violence and death, so he would resort to the Eternal Drowsiness to disable his opponents. Andromeda Shun entered a state of deep slumber and would remain asleep eternally. Hypnos feared that Athena's blood might have the power to awaken Shun, so to his regret, he decided to kill the Andromeda Saint in that moment.” 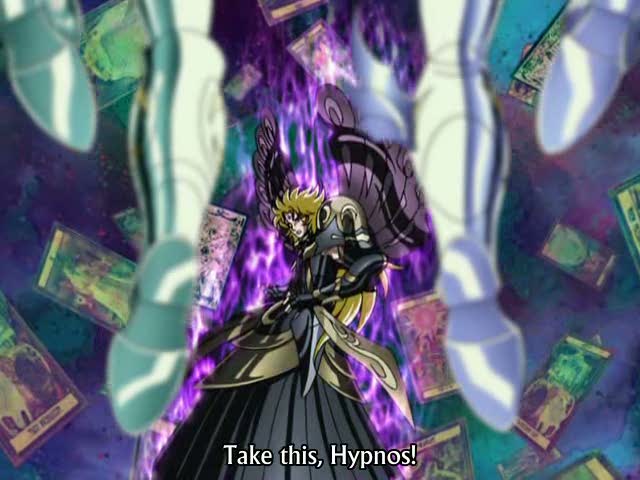 “Hypnos was stopped by the shock of the resurrection of Hyouga's Cygnus Cloth and Shiryuu's Dragon Cloth, which also reached their Divine states in that crucial moment. Believing he could dispose of the Saints as easily as he did with Shun, Hypnos unleashed once again his deadly Eternal Drowsiness. He was in for a surprise, as Shiryuu and Hyouga benefited of one of the most basic techniques that a Saint learns during his or her training: a technique a Saint has witnessed won't have any effect twice on them. Dodging Hypnos' attack, Shiryuu and Hyouga focused on the Eternal Drowsiness with a powerful Cosmo attack and neutralized it completely. The force of their attacks reached Hypnos, who’s Surplice was shattered, and his body obliterated.” 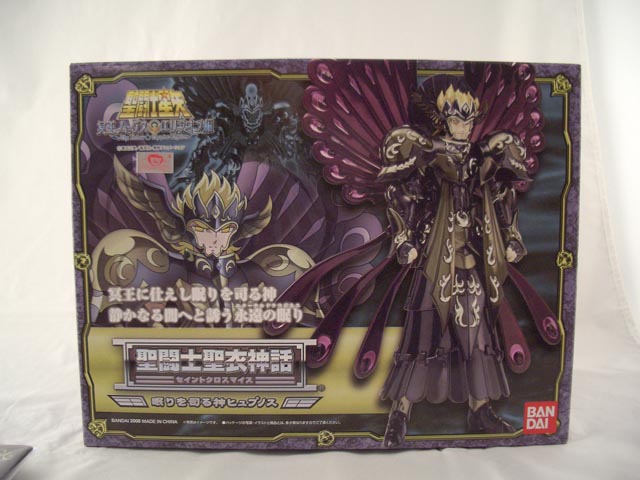 Hypnos is packed in a standard book style window box with the parts and pieces all neatly arranged in clear plastic trays. Yeah, I’m running out of ways to describe the box. It’s a box. It looks pretty. It holds stuff. 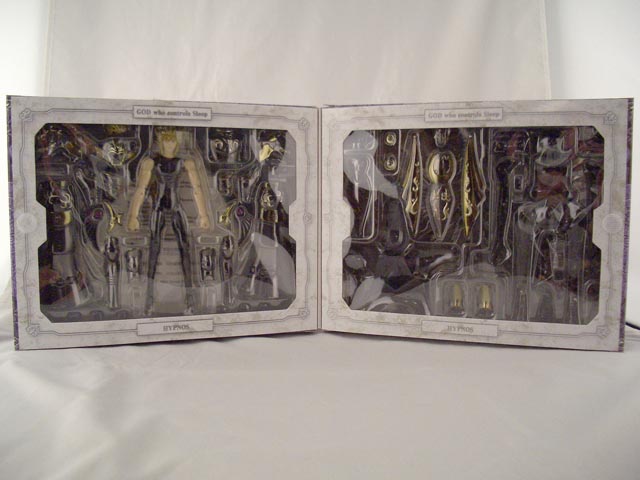 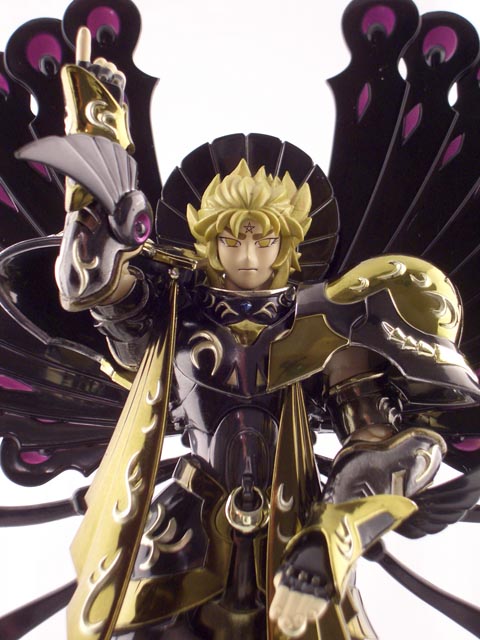 “Bandai pays a lot of attention to the little things” is something I say a lot in these reviews of the Saint Cloth Myth figures. Making sure to give the collectors the means to recreate famous moments from the series is high on the priority list at Bandai it seems. Hypnos is packed with the box/ark that young Pandora opens, freeing the God of Death and the God of Sleep from their 243-year imprisonment. I was so excited to see that in the box when I got my Hypnos. 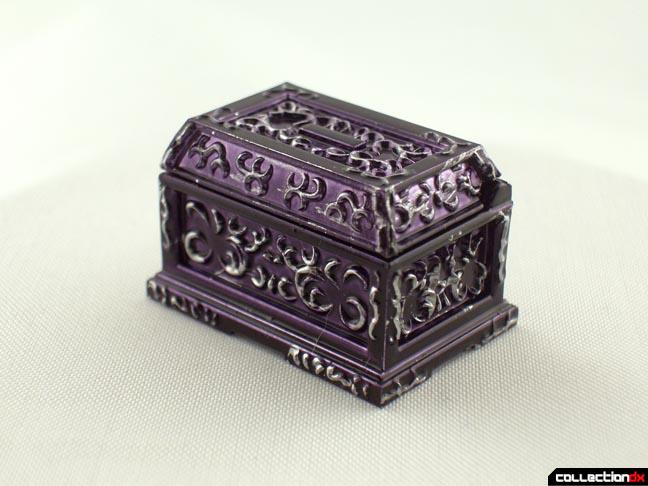 Other examples of great accessories from previous releases would be Pegasus Seiya – Athena’s Cloth (shrunk statue of Athena holding Nike), Gemini Saga – Dagger (used in the attempted assignation of Athena and then later in the series used by Athena to commit suicide), Poseidon – Athena’s Seals (stickers you can actually place on sealed objects from the series), Aries Mu Appendix - Shaka’s Rosary (used to monitor the life and deaths of Hades’ 108 Specters and carried by Mu after the death of Shaka) and the upcoming Saori Kaiodo (Athena) – Sealing Jar (Used to hold Poseidon’s Soul) and the list goes on.

Seemingly mundane items take on new meaning as the show goes on and Bandai plans ahead for the collector. 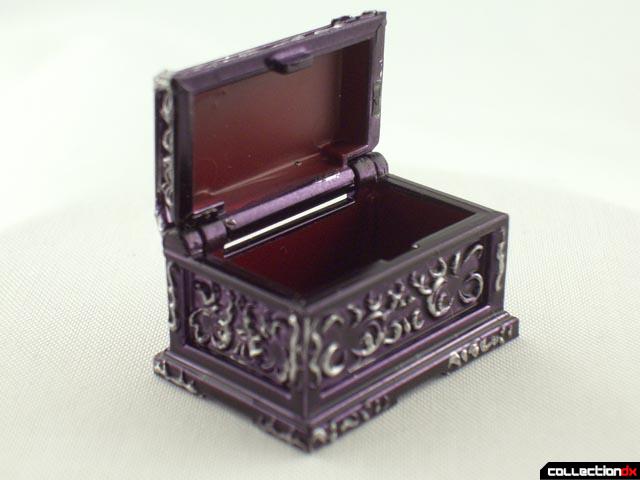 So yeah Bandai loves the Saint Cloth Myth and Saint Seiya fan. You pay a higher price for the quality, craftsmanship and attention to detail but it is worth it. 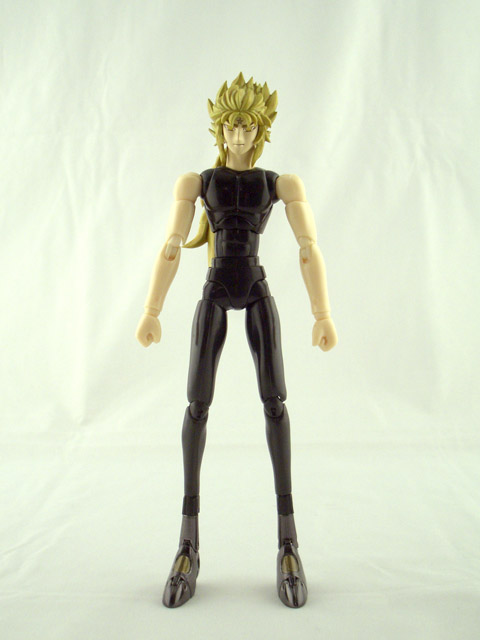 The figure itself is a type 3 body with copious amounts of articulation. The figure is all plastic except for the feet which are made of die-cast metal to match the armor. The bodies on these figures are fairly anorexic looking but that’s so the armor or cloths you put on them look natural. It’s about the Cloth (armor) after all. ;) 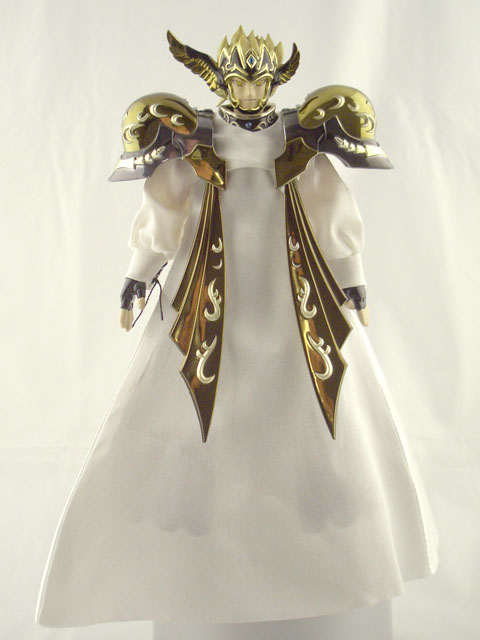 Hypnos features the same head sculpt as Thanatos (they are twins after all) except with Gold colored eyes and hair instead of Grey. Bandai also includes the robe he is briefly seen in. The headpiece is identical except the wings are reversed with the bigger wing on his right (Thanatos has his on the left.) 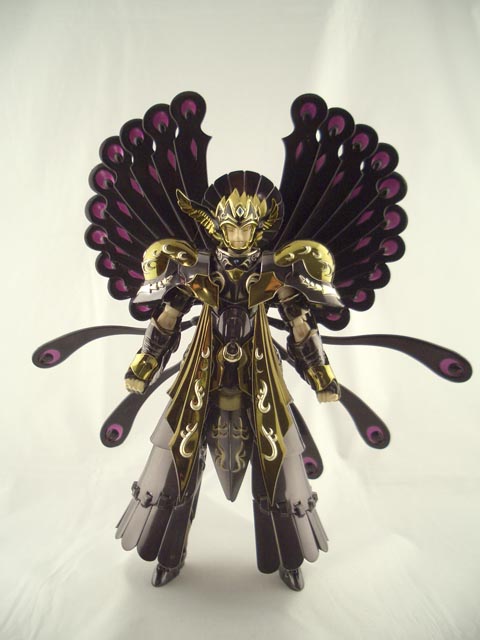 Now I found this particular armor difficult to get on. The codpiece/skirt just wouldn’t go in under the plate of the hip skirts properly. Technically he is not assembled properly in these photos; the side skirts are supposed to come in close to almost wrap his legs. No matter how I tried I just couldn’t get the codpiece to fit over and under to look like the package. 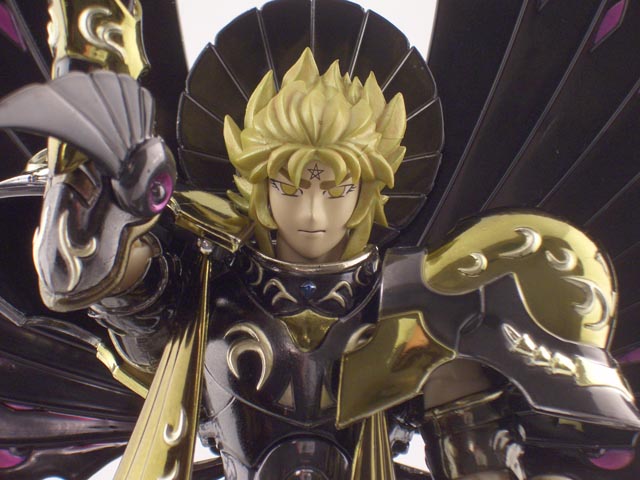 Bandai includes an adaptor to extend the range of the hinge on the right shoulder plate so you can get Hypnos into his “signature attack”, Eternal Drowsiness. 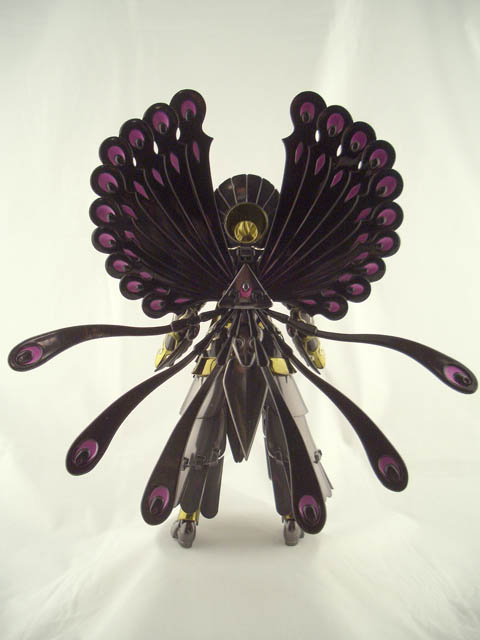 Much like Thanatos, Hypnos’s Cloth is equally as ornate. In classic art the God of sleep, Hypnos is traditional presented with peacock feathers and in a nod to that Hypnos’s Cloth comes styled with the peacock feathered motif. It sounds silly but it looks rather neat, especially in its object mode. 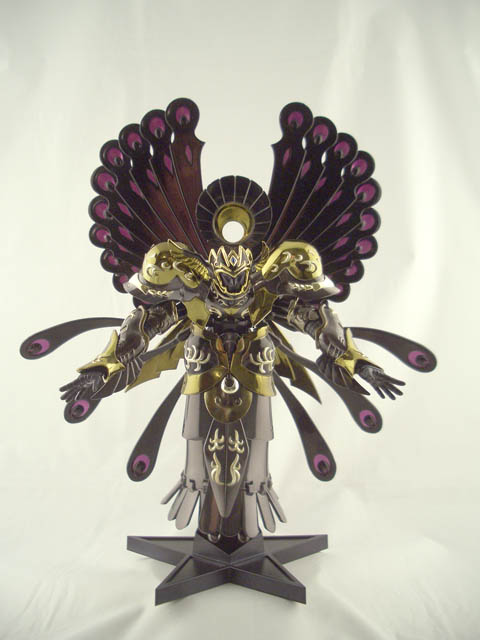 In object mode, I was able to get the skirting together the way it supposed to look but it literally took me an hour! Sometimes getting the armor together on these Saint Cloth Myth figures can be a fiddly process (you put the hand on but the bicep armor slides down, push the bicep armor back up and the hand pops off… you get the point.) but this was ridiculous! It doesn’t help I can’t read Japanese so any tips the instructions may have been lost on me (a problem that comes up often for this English speaking/reading, Japanese toy collecting Otaku.) Once the trauma of putting the object together is over what you are left with is a beautiful statue of the Hypnos Cloth bowing with the peacock feather fanned out. It looks so nice paired with Thanatos. 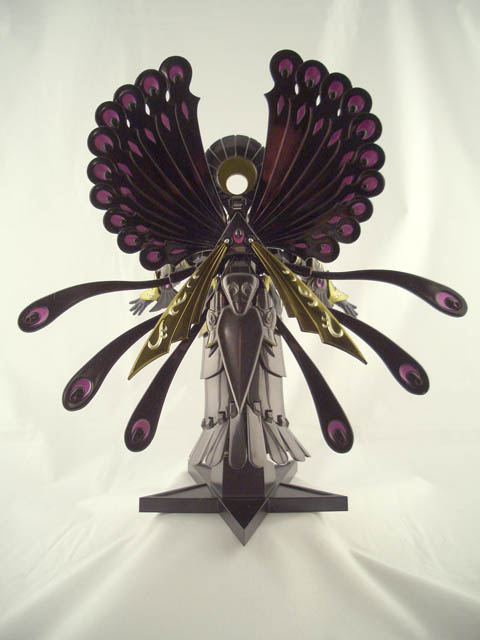 So I’m certainly mixed on this release. While I love the little touches and attention to detail, the sculpting is top notch and the finished product exquisitely detailed. This particular release was quite fidgety for me to assemble; leaving me a bit exasperated when done. To be fair, it could just be user error on my part not being able to read the instructions. 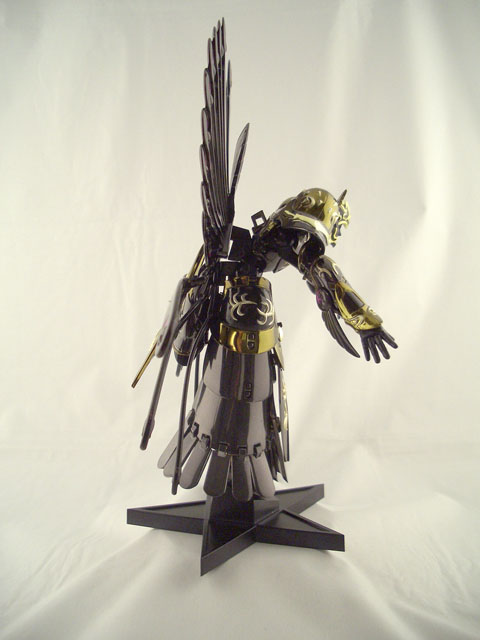 The finished result is beautiful, especially in its object mode. I think Hypnos is a must for Saint Cloth Myth Collectors but not a good choice for first-time buyers unless you like the armor design, then go for it. Just know it’s a bit more difficult/fiddly than most in the series. 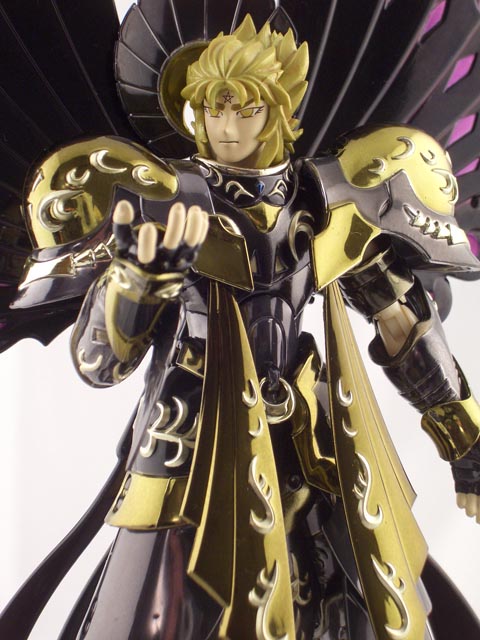 As always you can find a full video review embedded below.

HI ATMON, JUST WANTED 2 TELL YOU YOUR REVEWS ARE EXCELLENT?
WHEN ARE YOU GOING TO DO THE NEXT REVEW? WICH SAINT CLOTH WILL YOU BE REVIEWING?

Anyone know the difference between then Hong Kong and Japan version of the Myth Cloths? Is it just the metal plates? Why are collectors so enamored by these (the metal plates)? Thanks for answering!

HI ATOM UR REVEWS ARE EXCELLENT!
WICH MYTH CLOTH WOULD YOU BE REVIEWING NEXT? WHEN?
PLEASE ANSWER!!!!!!!!!!!!!1

Hey Atom, since you now have Thanatos and Hypnos, Which do you recommend to get? or which one is better?? Thanks