Gundam 00 was a great many things to the franchise. For some, it was their first introduction to Gundam while for others it was another entry in the long list of Gundam Universes. Myself, I found it rather refreshing at times in terms of design. There were some familiar features, but I feel the Gundam designs in Gundam 00 had their own sense of style and brought something new to old gimmicks. As the first in my series of reviews of the HCM Pro Gundams from season 1 of Gundam 00 I'll be looking at perhaps the most unique of the quartet, Gundam Virtue. 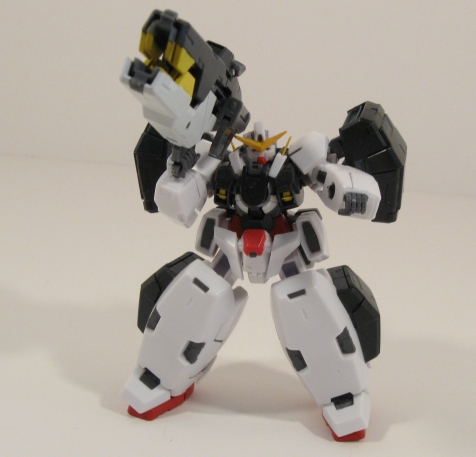 Virtue's initially appearance was a stark contrast to its effeminate pilot, Tieria Erde. Serving as the group's heavy weapons unit, Virtue has three guns that all do the same thing. 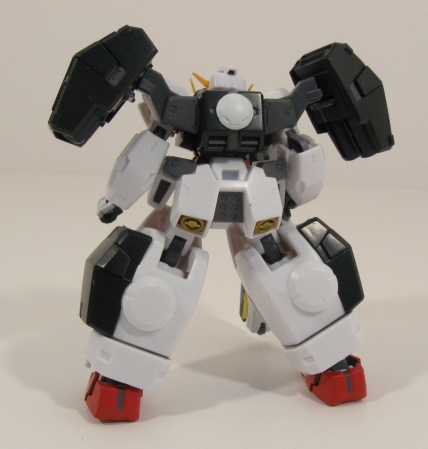 This pudgy, palm-sized Gundam is well executed with sharp paint apps and fine detail as good as a plastic model. 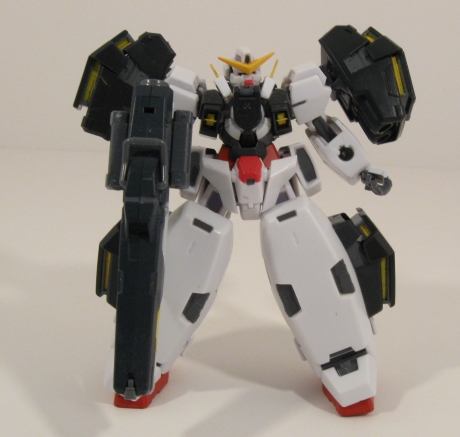 One of Virtue's action features include four panels on its legs and shoulder cannons which can be pulled out to represent its force field mode. 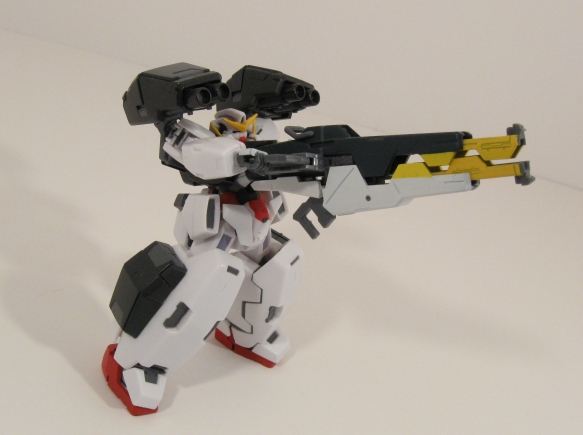 Taking advantage of its small size, this toy is incredible stable even when hefting its large bazooka into position. The shoulder cannons are mounted on swivel joints via ball joints and can move freely into firing position. The bazooka opens up and extends for maximum firepower. 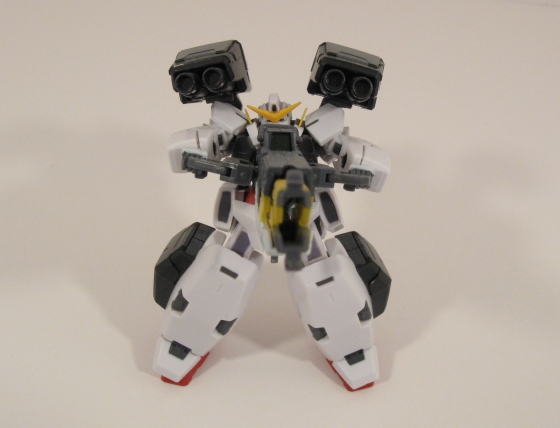 In this mode, Virtue grips its bazooka via two movable handles. The back of the gun plugs into a flap which sits over the toys chest orb (or GN Drive for the picky). 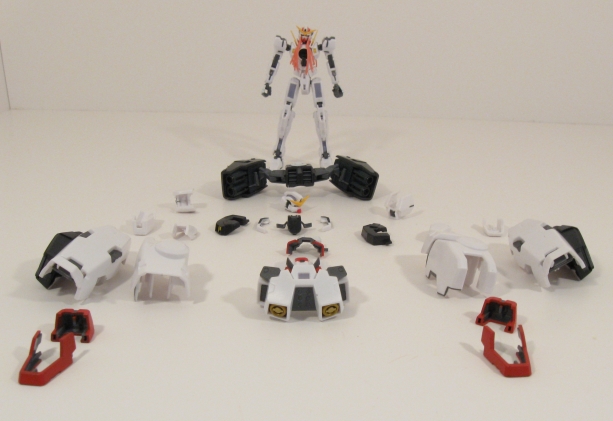 Virtue's biggest surprise comes with the removal of a whopping 21 separate parts (coupled with a head swap) that reveals the inner Gundam Nadle (pronounced Nad-leh). 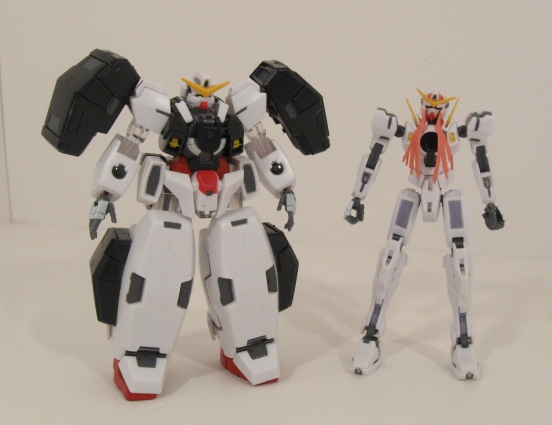 Now since this is a 1/200 scale figure (roughly 10 centimeters tall), you don't want to keep track of all those tiny parts right? Thankfully, this set includes a clear skeleton that can be used to store all of the extra parts. Applying the parts to the Nadle figure is somewhat fiddly. The larger parts like the leg and arms parts go on without any problem, but the chest parts are the most difficult because they have to be put on in a certain order. The hardest parts have to be the two chest pieces that clamp around the chest orb. There is a collar piece that has to plug into those and the front red torso piece. I don't recommend this toy for the impatient (or the ham handed, sorry Josh) because even if you wanted to just display this toy as Virtue, the armor comes equipped on the skeleton so you have to perform the procedure at least once. 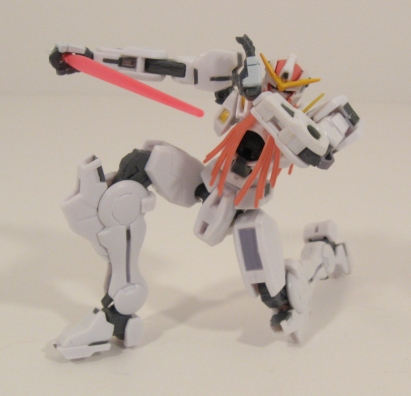 Regardless of these issues, Gundam Nadle is one of the most unique Gundams. Its a strange combination of a cut down design mixed with some feminine touches like its PVC hair which are actually cables that connect the face parts in the show. Nadle is incredibly flexible with the notable exception of its head. The PVC hair is just too hard to flex out of the way so the head is mostly locked in place by its own locks. 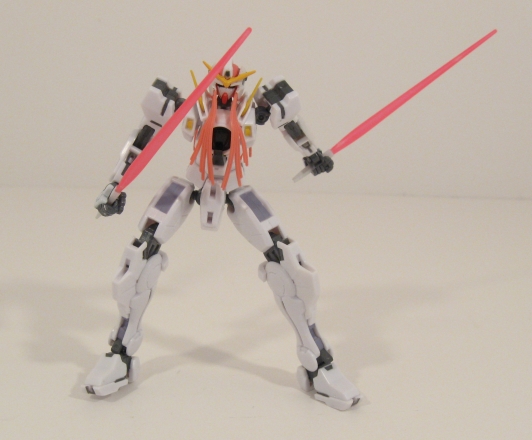 While Nadle is a great figure, it is a bit lacking in accessories. You can give it two beam sabers. 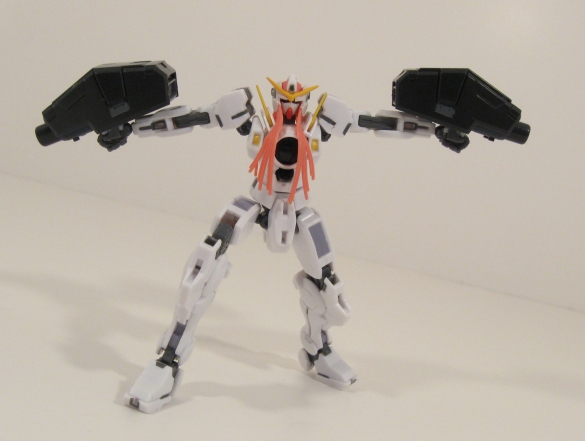 You may also give it Virtue's shoulder cannons. Each cannon has a fold out handle which the figure grips like a pair of tonfas. Sadly this toy was released before Nadle received its beam rifle and shield in the show. 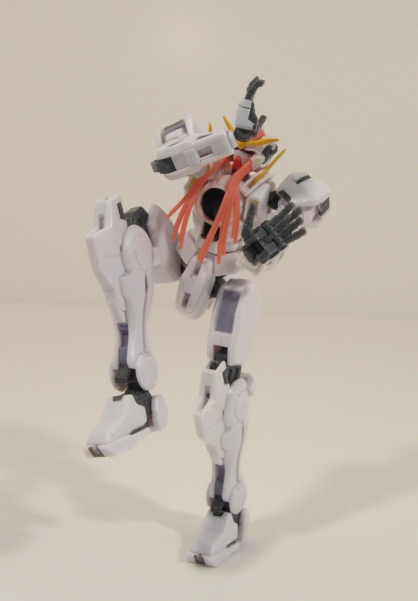 My final word on the HCM Pro Virtue is its an interesting figure with all its details and the transformation to Nadle. While the equipping procedure is fiddly, the results are pleasing to fans of the HCM Pro line. So far this is the only toy of the Virtue that execute this Gundam's unique cast off gimmick. Overall, a great execution for such a small size toy.

its nadleeh right not nadle...

I know but its spelled "Nadle" on the box.

The first time he released all the armor in the show,I was like,"What..the...hell?" So weird and original.

Actually, it's not really. It's pretty unique for a giant mecha show, but Kamen Rider Kabuto did it a year earlier, with almost every member of the cast and occasionally the monster of the week.

Why'd you need the arm band? Those who walk the path of darkness need no armbands! It's useless for them to grasp for one!

Seriously, though, do review it. You could just review the features, like how CDX occasionally reviews vintage stuff with missing accessories. You could just attach a stretchable armband to the bottom, maybe.

Oh, did you ever get the Zero carriages? Thanks to your recommendation, I watched Den-O, and thoroughly enjoyed it.

..and the Armored Valkyrie from Macross.

I'd argue if the underlying machines in those cases are separate units. Virtue is supposed to be two different Gundams in one. They even have different designations. Its a little different that your standard full armor, thematically at least.

Well I haven't seen Kabuto (I'm kind of whatever about modern Riders),but I don't think they can be considered the same at all. You're talking about a giant mech out in space,and then it turns out to have hair. That's unusual. It would be like if I drive down the street today and various parts all fell off my car at once,and left a trail of wires.

Oh, you meant Nadleeh's appearance? I though you meant the whole cast-off thing. Yeah, it's design is original... IMO, the car comparison doesn't really work. An exposed car would be somewhat silly, while Virtue is essentially an elaborate suit of armour with big guns for the core suit. Then again, I'm not sure where I'm going with this. It's a cartoon about giant robots powered by green fairy particles fighting against men who treat their war machines like old cars and triplets who use evil fairy particles. It doesn't really matter.
Actually, about originality. One of the Kabuto riders also had wires all over him (Sasword, although that was in his armoured form) I thought the hair strands were coolant wires (or whatever they're called) like FMP's Laevantain myself.

Nice review, good to actually see the HCMs on display, you never really get to appreciate just how small 1/200 scale is when you build in 1/100 scale.

Before my hiatus, I built this combo in the 1/100 scale, but due to the size of it there's a few weight related issues with its big gun; the arms can't hold the weight well at the wrists, etc, but the execution was great!

The "pre Cast Off version" looks like a Linebarrels mech with a Gundam head on top.

More like an armed slave with a gundam head for me...

Actually, the chest orb is called the GN Particle Condenser, a device that distributes excess GN Particles to the Gundam's weapons and equipments, every Gundam needs one. The GN Drive is a cone-shaped device on the Gundam's back, acting as a power plant and vernier thruster.