Today I will be reviewing the Goldran DX re-issue, made by Sonokong/Takara. The sample for today's review was provided graciously by our friend Jeff Stein over at High End Transformers. Please check them out or just click on the Ebay links at the bottom of the page for a direct link to the item reviewed today.

Goldran is the main mecha character from the anime "The Brave of Gold Goldran" He is essentially a two component robot. One component being a robot that can turn into a car (Dran) that becomes the chest of Goldran. The other being a Mecha Godzilla like robot (Golgon) that turns into Goldran when combined with the first.

To start off with, Goldran comes to you in a beautifully illustrated, heavy corrugated cardboard box shown below. 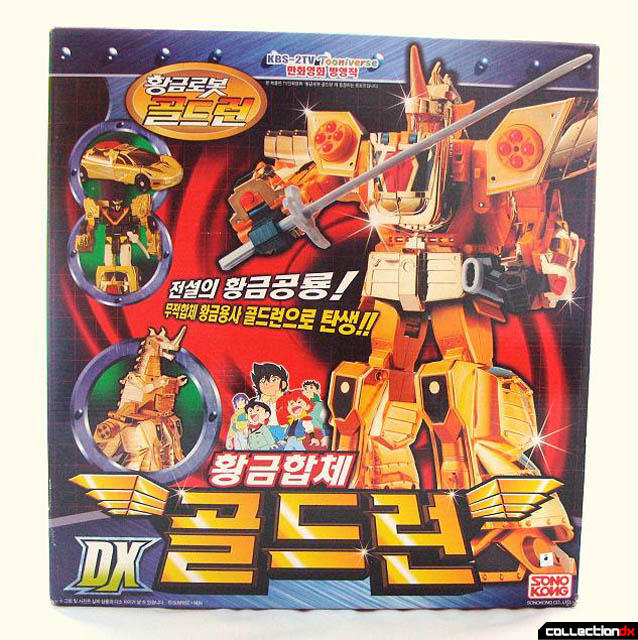 In the photo below we have Golgon and Dran together in their alternate modes. These are the two mecha that I mentioned above that become Goldran 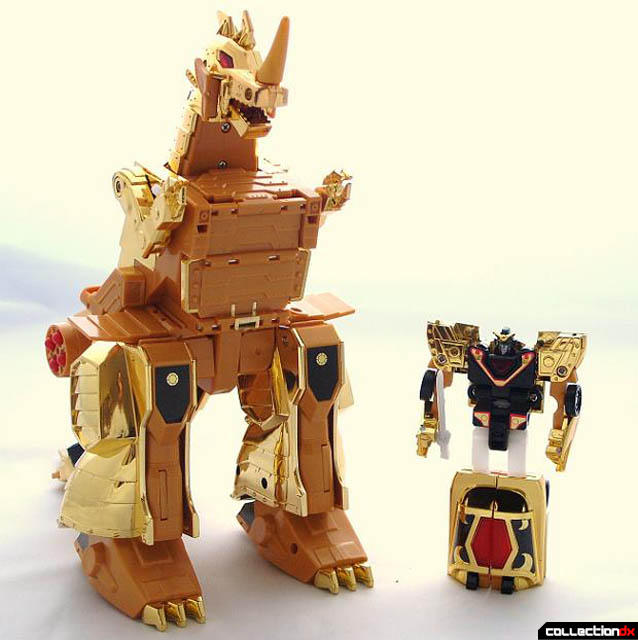 First up is Dran. Dran's robot mode stand about 5" tall is made out mostly gold chrome-plated platic. The Gold Chrome plating looks really sharp and has no visible flaws that I could see. Articulation for Dran is limited to the elbows, so he is basically a "static pose" figure. Dran comes with a sword that can be held in either hand via a peg molded onto the sword. Dran's robot mode is rather boring and is pretty underwhelming when compared with the other figure in this set. 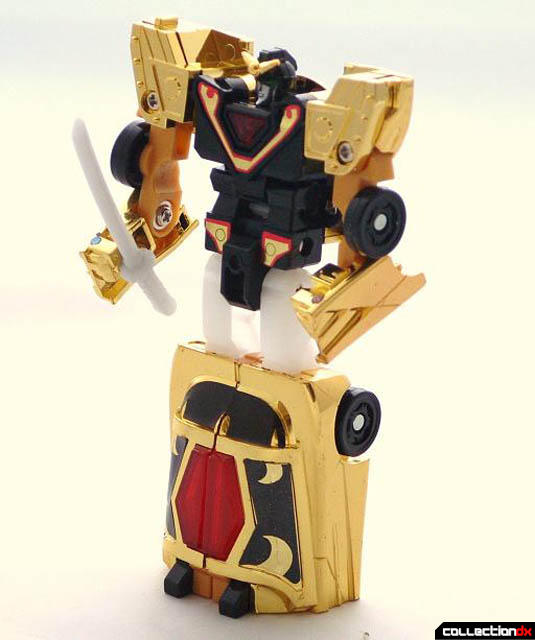 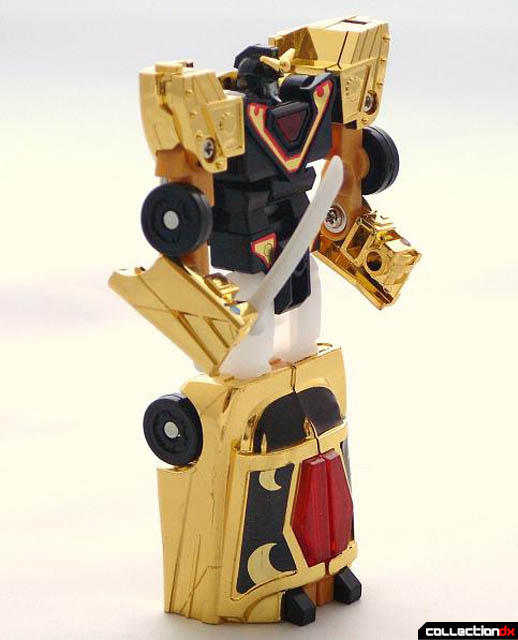 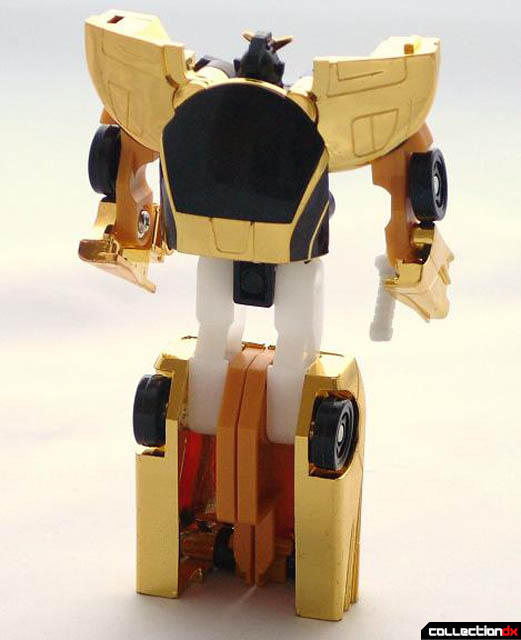 Dran's alternate car mode isn't much better than the robot mode. As you can see below, The car has an elongated chassis, giving it awkward looking proportions. However, the car is very solid and its wheels roll freely. 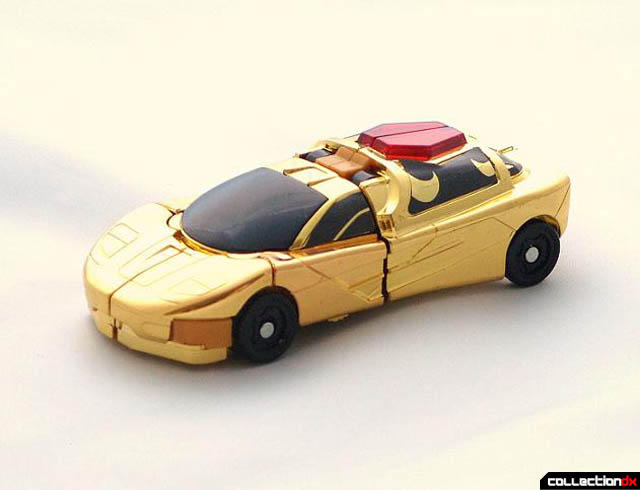 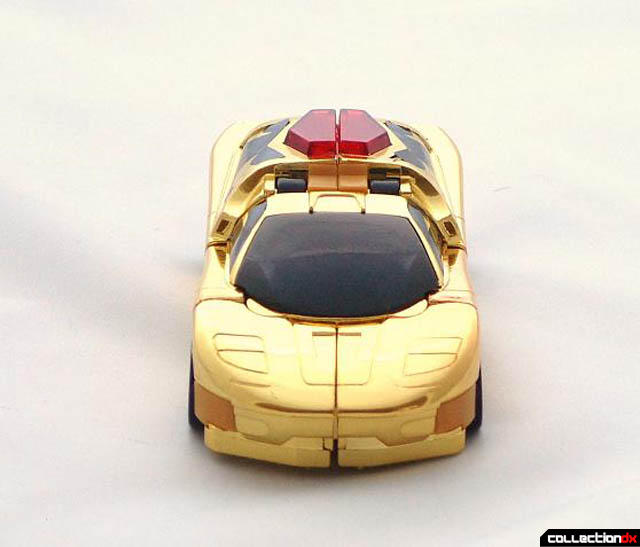 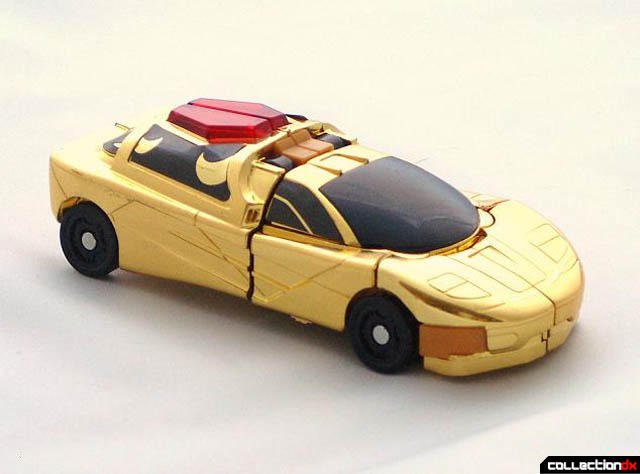 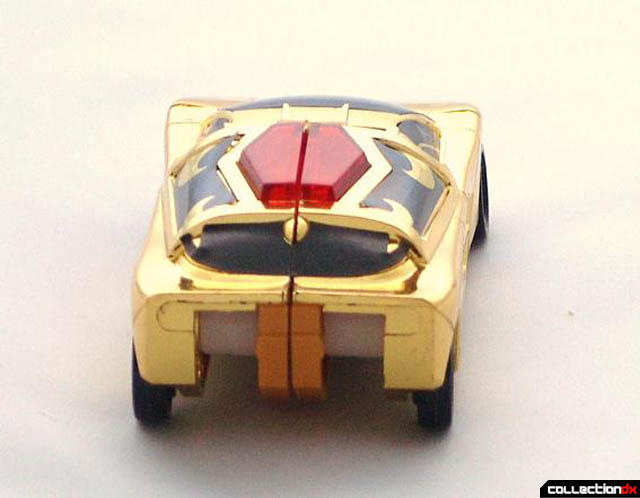 Onto Golgon! Golgon is the Mecha Godzilla looking robot you see below. Golgon stands about 10" and sports a beautiful golden chrome finish like Dran above. This figure has articulation in its arms and jaw, that's about it. Golgon is a pretty impressive figure but sufferers from a few odd proportions due to its design. As you can see, the chest area is rather large, rendering his tiny arms useless. Also, his legs just look odd because of having no visible knee joint. These issues are only minor and I can live with them. 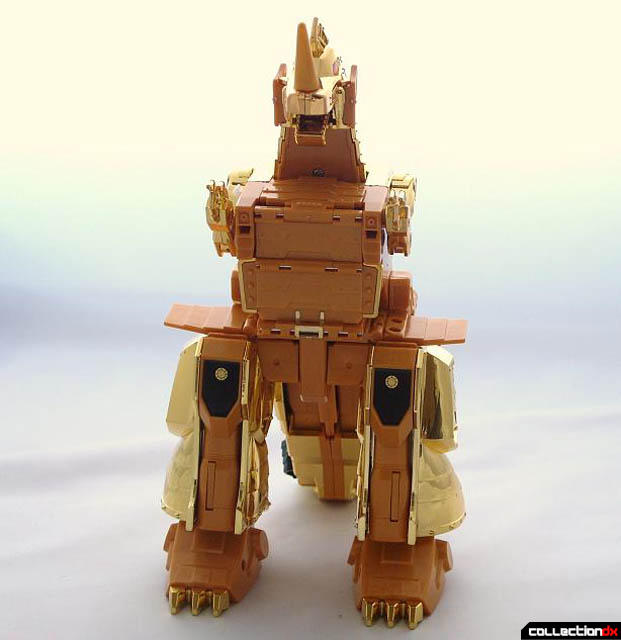 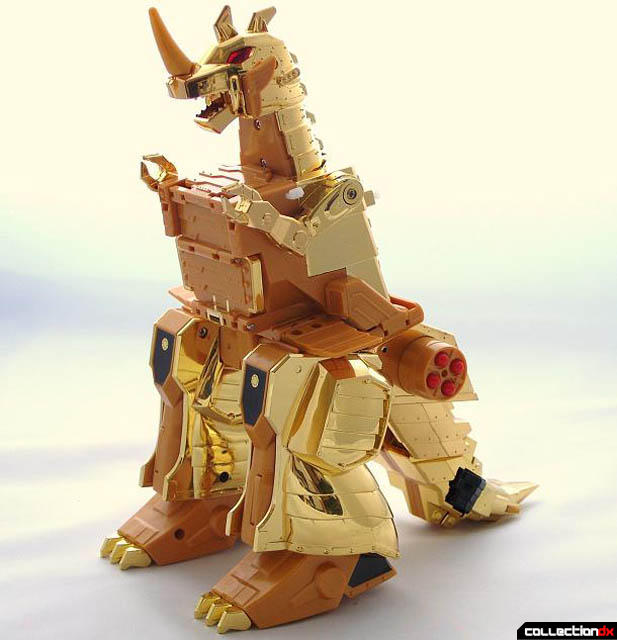 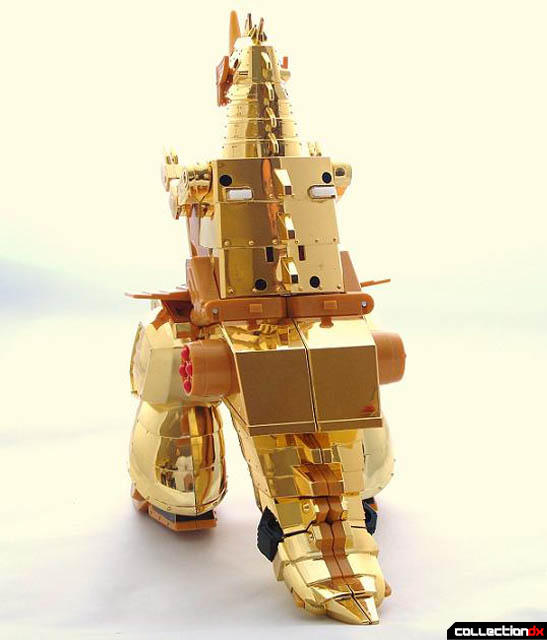 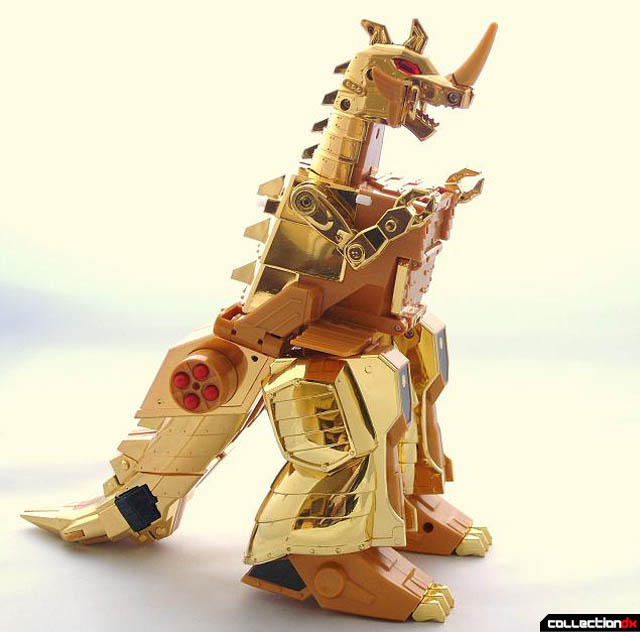 Here is where the real fun begins! Goldran!

Goldran is a truly stunning figure, standing at nearly 12" tall also makes him pretty large. As you can see in the photo below, Goldran includes a sword and sheath. the sheath holds securely to his side and gives Goldran that old Samurai look, very cool indeed! 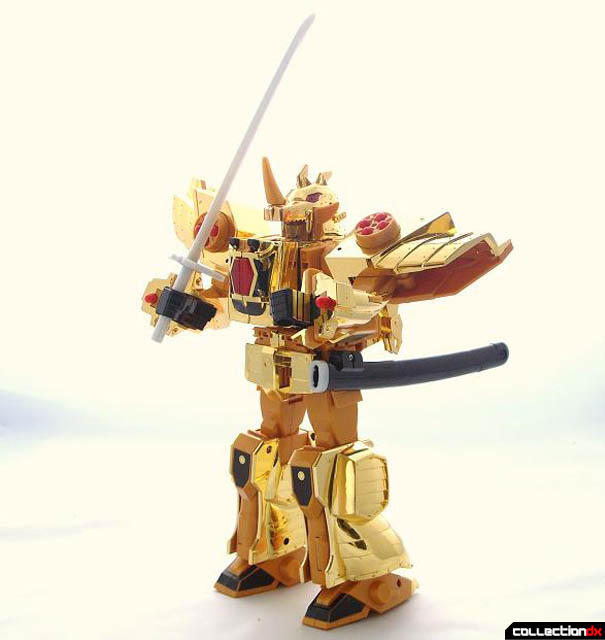 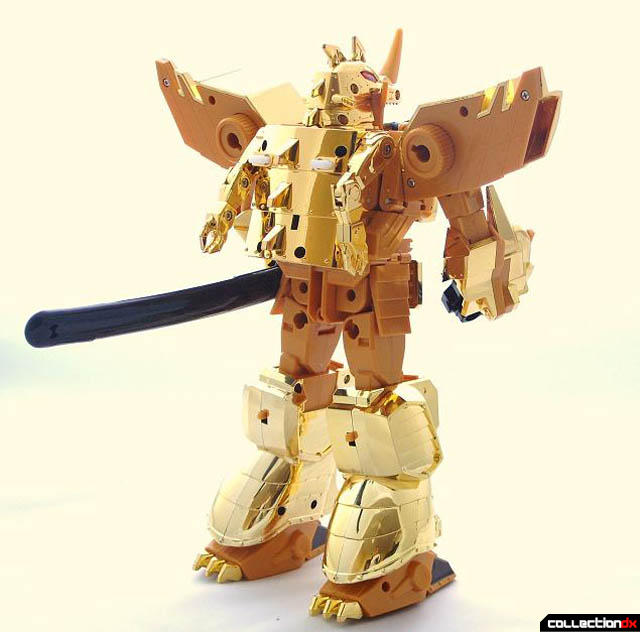 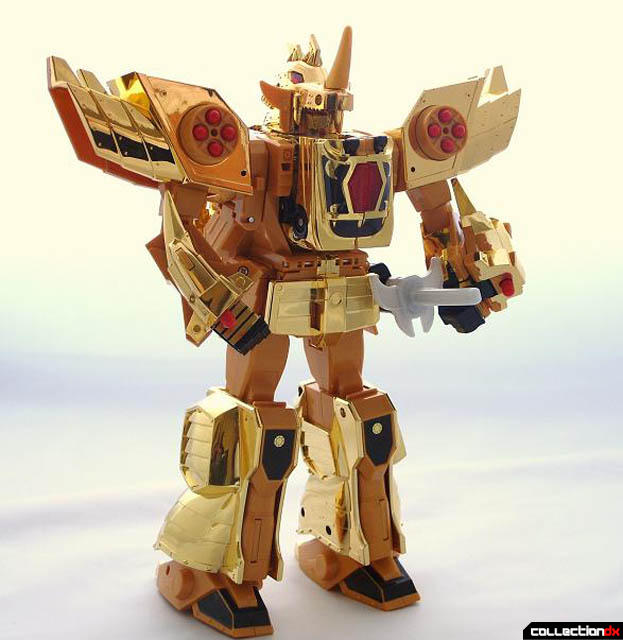 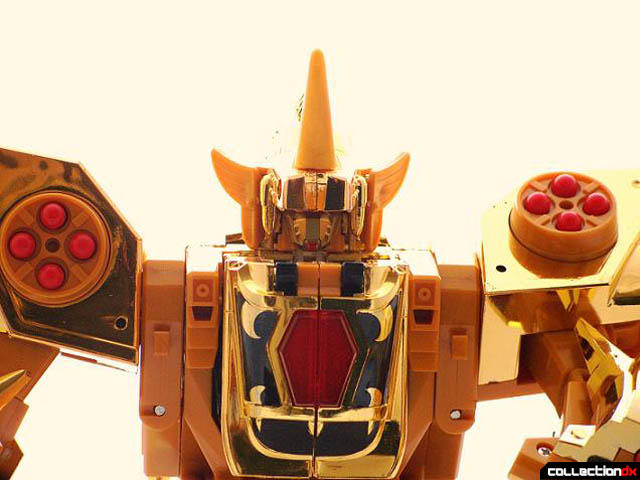 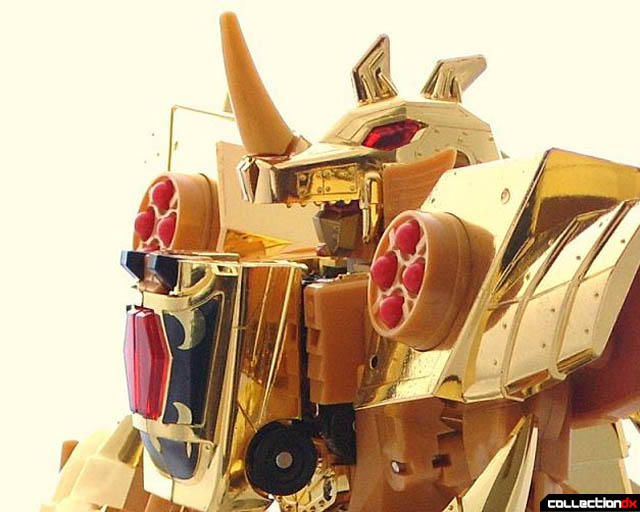 After examining the five photos above, you can clearly see that Goldran looks great from any angle. Heck, he even looks menacing close up! Proportionally, Goldran is awesome in this mode. I would say he is one of the better looking mecha characters from all the Brave Series.

Goldran doesn't just have good looks.....He also has firepower and tons of it! He has 12 launching mechanisms for plenty of that "you'll shoot your eye out goodness"! Don't worry if you lose a few projectiles testing it out on the family pet or wife, because he includes a total of 48 red missiles! 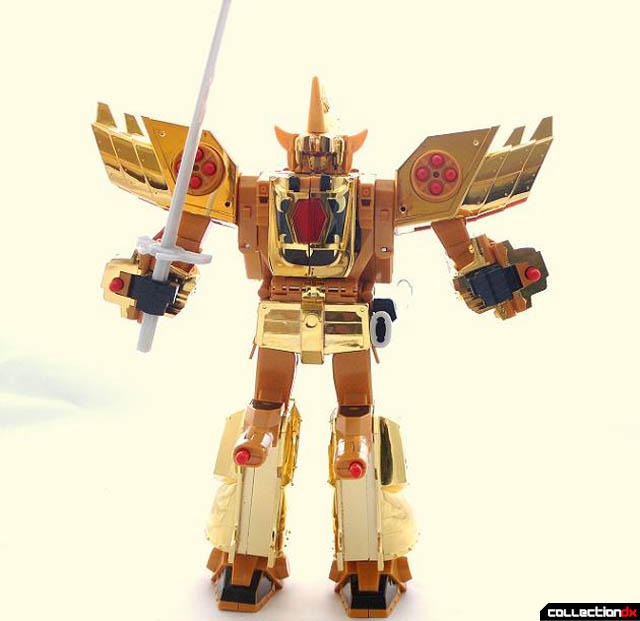 Shoulder mounted Gatling style launchers that are activated by turning a knob on the backside of the shoulder. 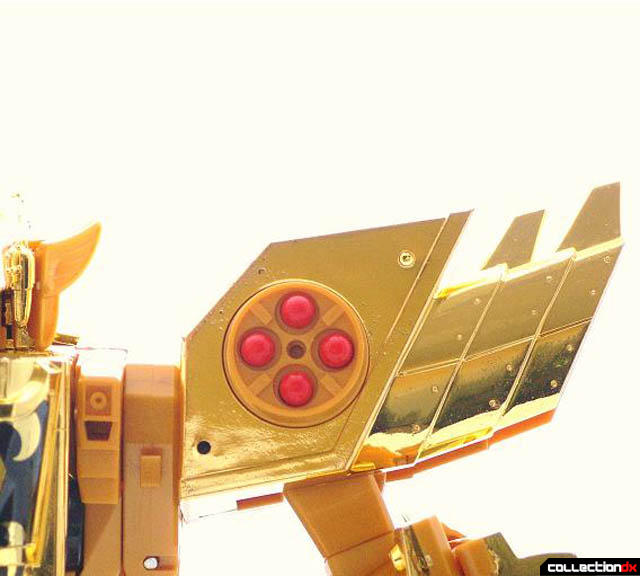 Wrist cuff launchers, just in case the shoulders weren't enough to take out the enemy. 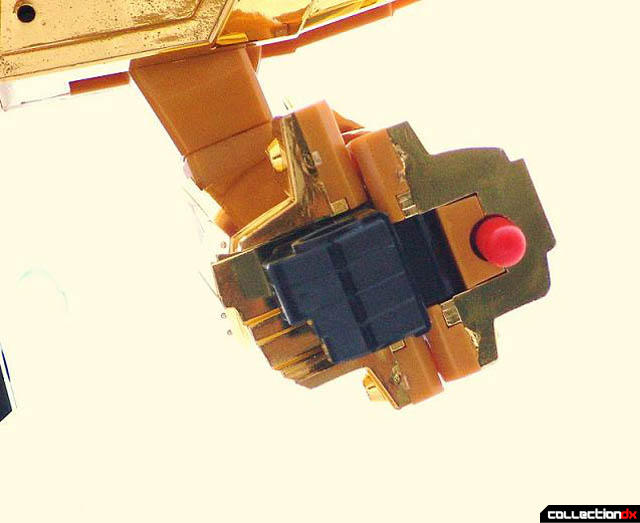 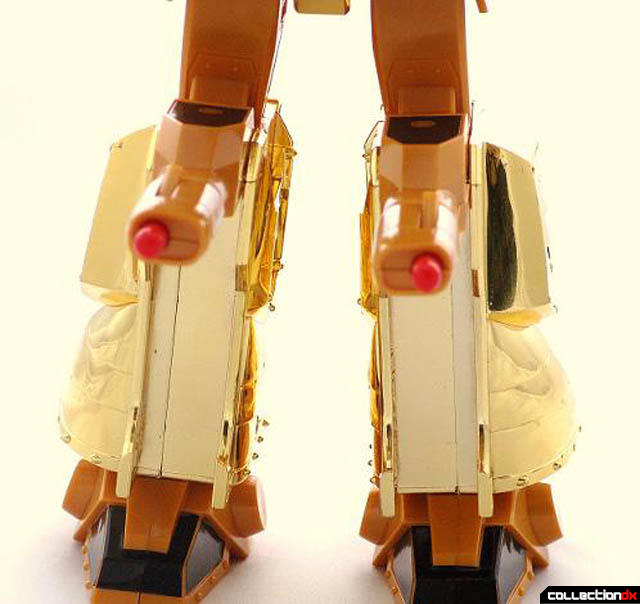 Yup, Goldran is a lot of fun, but let me show you a few more tricks he has. In the photo below, you can see that it is quite possible to play with Goldran without Dran figure mounted to his chest. I know that this is not in the anime, but its still a cool feature whether it was made this way intentionally or not 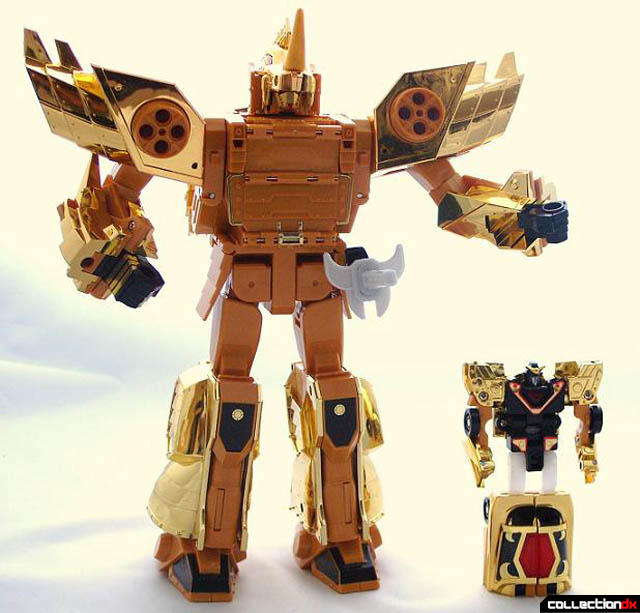 In the next photo below we have Goldran with his buddy Sorokage mounted to his back. Sorakage is used a flight pack giving Goldran the ability to fly. Don't you just love wings on a giant robot? Below that pic we have Goldran's ultimate form, Great Goldran! By the way, don't despair, I will be reviewing Sorokage and the Great Goldran in future reviews 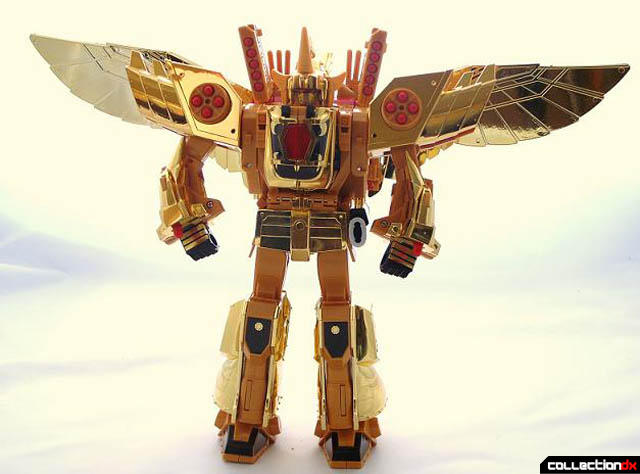 Even with the odd proportions of it's alternate mode, Goldran is a wonderful, quality made toy and should be part of your collection if you love giant transforming robots. And really, who doesn't?

17 comments posted
Dran is so similar in

Whoa- Dran is so similar in transformation process and robot form to "TF Cybertron"'s Hot Shot (i.e Excellion from "TF Galaxy Force") that it's creepy...

Volfogg has the closest (his legs extend down rather than flipping down).

When you said reissue I thought you were going to review the Brave Revival reissue by Takara. This one:

But the original is still very nice (I have both Sonokong and Takara Reissue of Goldran).

I really wish I had the Brave Revival Great Goldran set to review.... I just cant seem to find it cheap enough.

I know what you mean. I got mine a few months after release for a good price but now the prices have skyrocketed. That is if you can even find it.

I did a review on another site but I'm not sure if its ok to link to it here.

Just received mine yesterday! I love this guy, though when I received it, it has some tarnishing to the chrome gold plastic. This was in multiple locations around the toy, but at its worst on Dran's hood. The toy looked quite old, despite being new out of the box. However, let me note that the seller, Highendtfs, really went the extra mile and is sending me a new one free of charge. I asked him to check the new one out and it's not got the same flaw. So, I have a spare Goldran now that I can let the kids play with!

This looks like the perfect toy for anyone who's disappointed in how few firing gimmicks modern toys have: twelve launchers in the initial combination! It looks like the wings add another ten (!) as well.

Goldran is one of the best looking Brave toys out of the box. I love the little Kunio Okawara touches to his design like the Gundam face, waist, and feet. He's practically a Musha Gundam's cousin.

So in your honest car expert opinion, Dan, what kind of car does Dran turn into?

Cant you tell Andrew, its plain as day! A Formula One car of course...LOL But seriously, It reminds me of cross between and elongated Lotus Elise with this stretched Ferrari 360 Modena. I really don't know exactly, I definitely has a little European flair

Goldran's always seemed a little... tacky to me in terms of color choice. Otherwise he's a pretty solid robot I think. Plus the opening is just so awesome and catchy.

Great review, Dan! I'm currently sold out of these, but I will have more in about a week. :)

Hi Jeff,
I see that you sold out today. I wonder if my review had anything to do with it?

Didnt know you frequented these parts. I havent bought much from you but I do appreciate what you're doing for the Brave community. So thanks :)

You can't do better than to buy from Jeff!

fujikuro, glad to hear you got these guys and that you're enjoying them (despite the mishaps with the tarnished gold)!

Dan, love the review! It's hilarious: I'm super-psyched to check out your upcoming Sorakage and Great Goldran reviews...and I already have the toys! :P

Goldran is back in stock!