Today I will be reviewing CM's products Gakeen. Gakeen is number 17 in CM's Brave Gokin line of high-end modern Chogokin.

I'll start off with the box. The box is quite large with the dimensions of 5"W x 13"H x 19"L. The packaging has been tastefully decorated with pictures of the enclosed mecha on the front as well as some cool pictures illustrating the gimmicks and features of the toy on the back. For the boxes size, it is surprisingly light at 2lbs. 7 oz. This is never a good sign having a chogokin box that weighs so little for its size...sigh... 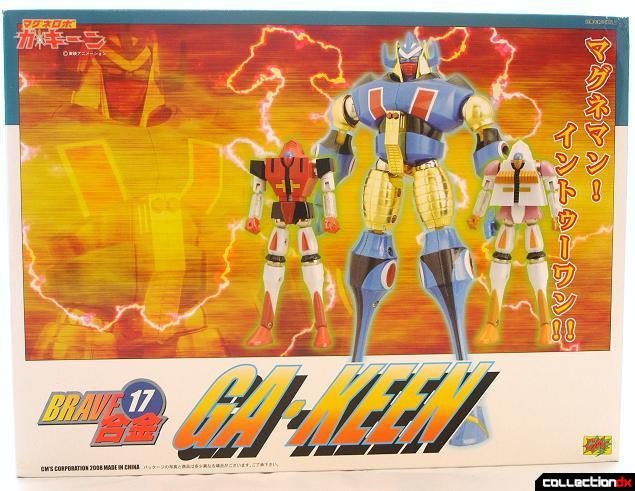 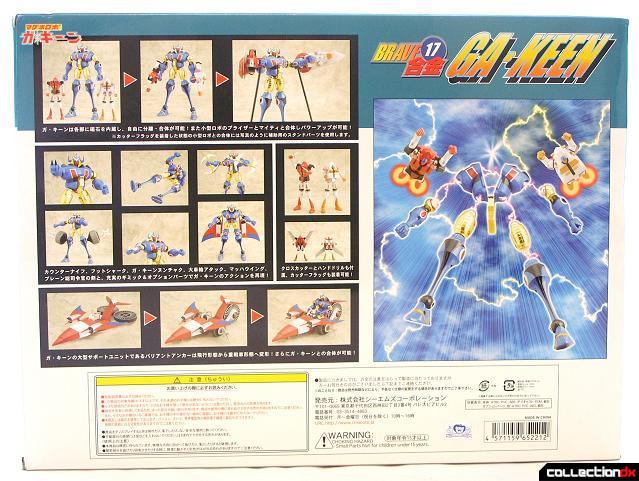 Opening the box you are greeted with a virtual plethora of parts and accessories encased in glorious Styrofoam. I usually like to list all the stuff included. Instead, I'll let you, the reader visually take inventory of all the parts and pieces. 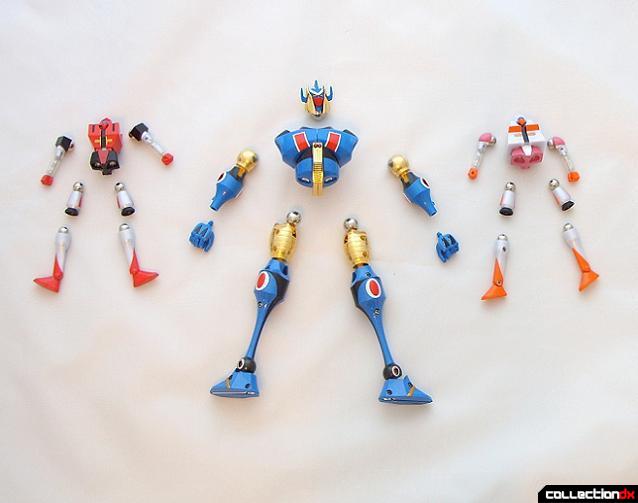 The most important items in this box are all the separate parts that make up the three mecha, Gakeen, Mighty (Magnetman Minus), and Puraiza (Magnetman Plus). As you can see in the picture below, all the mecha are held together via magnetic connections. This makes sense because this is Magnetic Robot Gakeen after all! 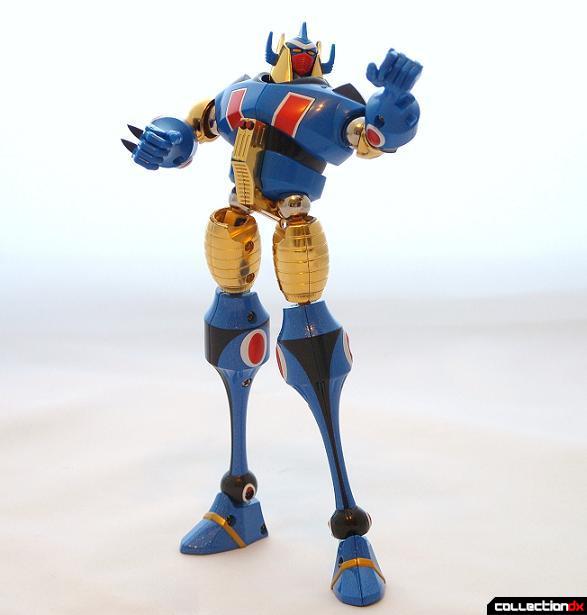 The first mecha to start off with will be Gakeen. Gakeen stands approximately 7.5" tall weighs in at a lightweight 8 oz. Gakeen is quite a bit lighter than I initially thought he would be. He is made of die-cast metal, plastic and of course, magnets. The die-cast content can be found in the inner chest, bicep area, thighs, calves, and feet. Magnets are reserved for the joints as shown in the picture above. The balance of the figure is made up of plastics.

Gakeen is oddly proportioned when compared to other Super Robots of the same time period. Just check out the super slender almost feminine calves. They are not only slender but really long, making this robot just look odd in my opinion. What happened to the thick calves and forearms formula? I guess it doesn't apply to Gakeen.

Gakeen is fairly pose-able and will hold a pose pretty well with a few exceptions. The problem is that he is really difficult and aggravating to get him in a cool, dynamic pose. This is compounded by the less than adequate magnets at the hips. Don't get me wrong, it stays together, they just aren't really strong enough. This lack of magnet strength makes the legs do a split if spread apart too far. Splits are great if you're a gymnast, but if you're a Super Robot, not so good. 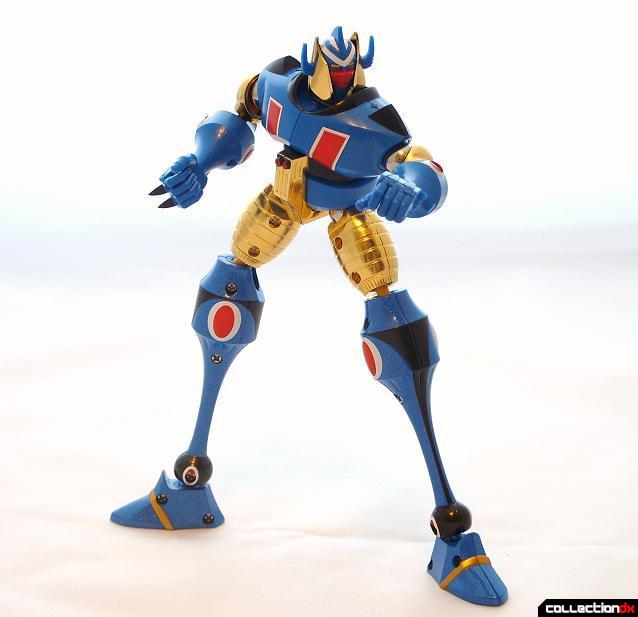 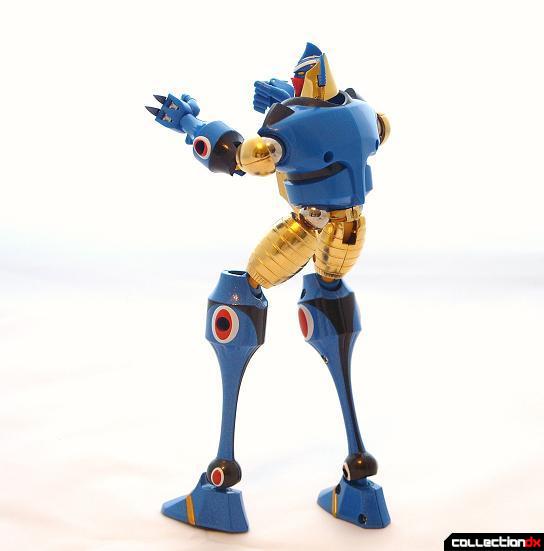 Here is the part that is good about Gakeen... All the gimmicks. Check them out! Spikes that flip up from the backside of the hands. Way better than brass knuckles! 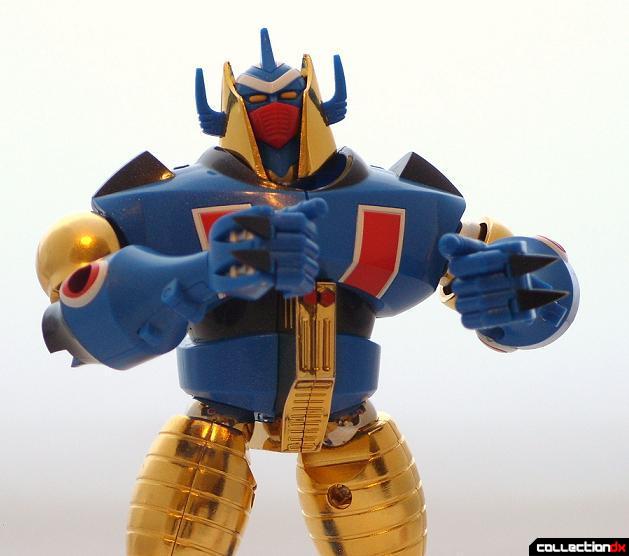 Rocket Punch! Firing fists are a Super Robot staple and Gakeen has some pretty good ones. Well, at least mine fire pretty far. Sorry for the lousy photoshop work. I just wanted to give the effect, and the stand showing really ruined it. 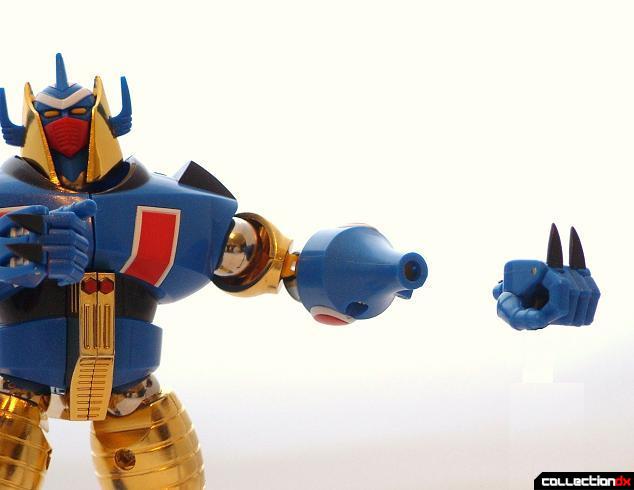 Blades that retract into the feet, why not? Both feet have these so that Gakeen can slice his opponent with a swift kick. 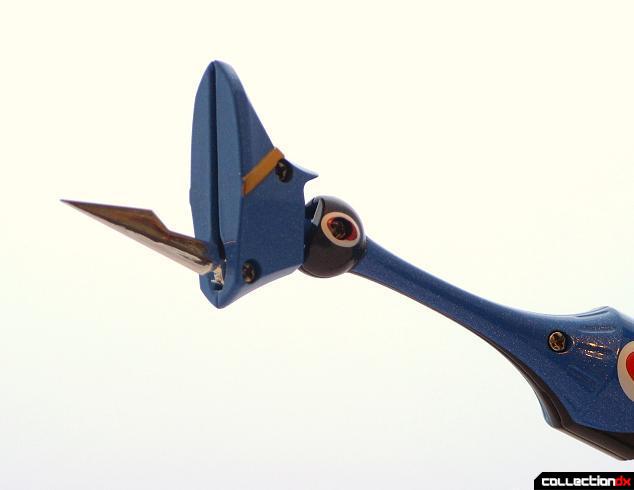 This next weapon is one of my favorites. The blades remind me of Grendizer's double harikens, a very formidable weapon. I actually think these look a bit cooler with the chain that connects them. 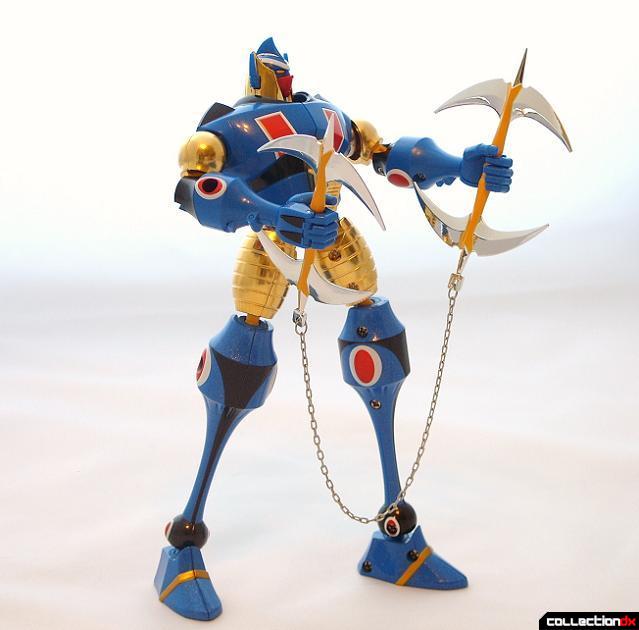 A sword, as if Gakeen didn't have enough slicing weapons. 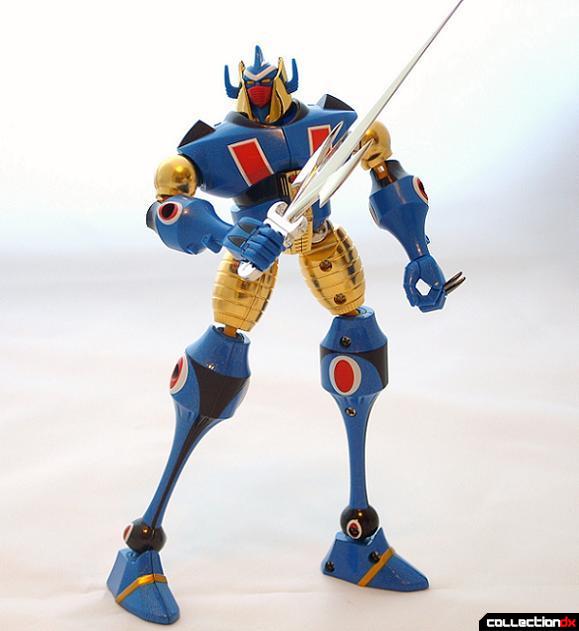 Every giant Super Robot needs an equally giant vehicle, right? Well, Gakeen is no exception! Even though he can already fly, making this sorta redundant, he has a hovercraft that can transform into a souped-up trike as well! Actually, I much confess, its really a quad and not a trike. I say this because it has a tiny wheel that can fold down to support the weight the front in vehicle mode. The front wheel is not shown in the anime, so I called it a trike. Check it out. 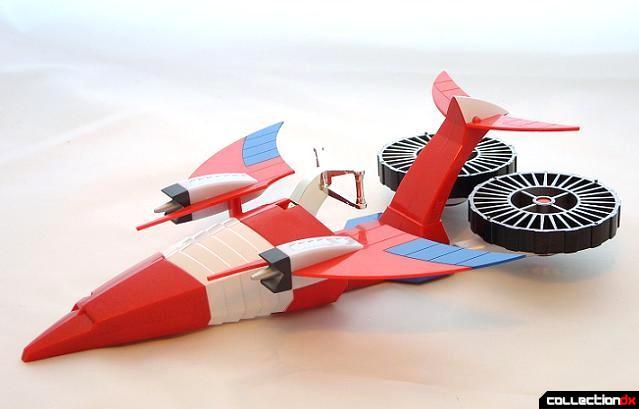 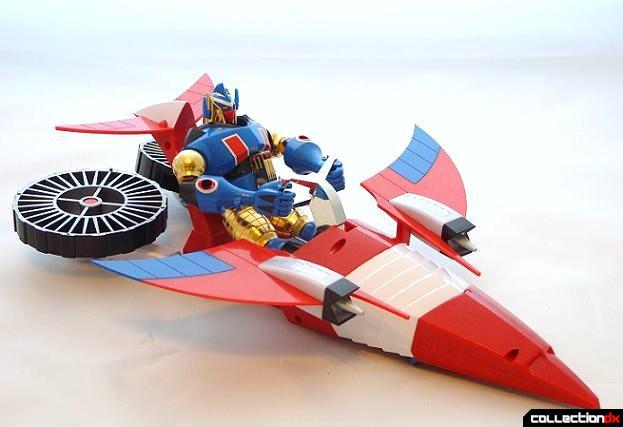 The Trike is pretty large, about 10" long and completely made from plastic. The plastic feels rather cheap, almost model-like. The transformation from hovercraft to trike mode is very simple. You just add the side wheels and fold together the rear hover blades, making one giant wheel. In the trike mode, you can add the star-shaped objects to the center of the wheel hubs, giving the trike an almost Roman chariot look. 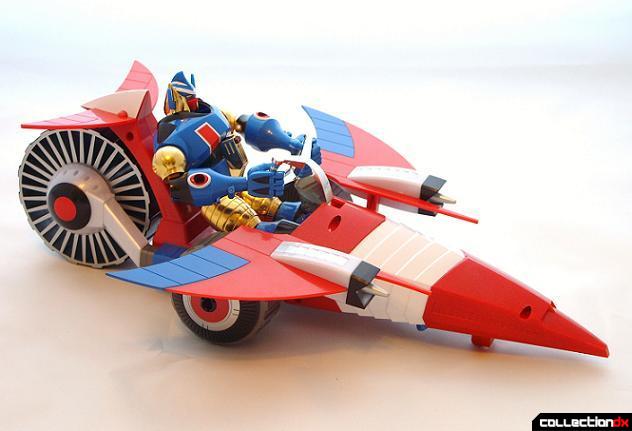 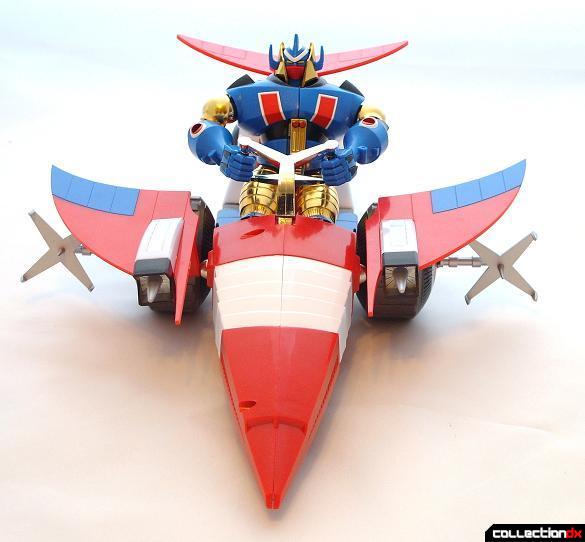 So, what do you do with those spare parts when you are done playing around with Gakeen's trike. You attach them to Gakeen, of course! The tires from the trike attach right below the knee joint on both legs of Gakeen. Doing this allows Gakeen to roll on them when the legs are bent, just like in the Gakeen anime opening video at the beginning of the review. 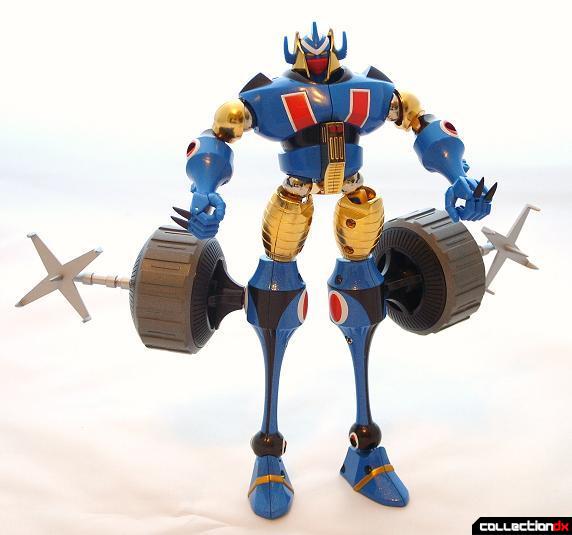 *Note, this mode was achieved with the use of transparent tape to hold the legs together. If not used, Gakeen would just do a split. 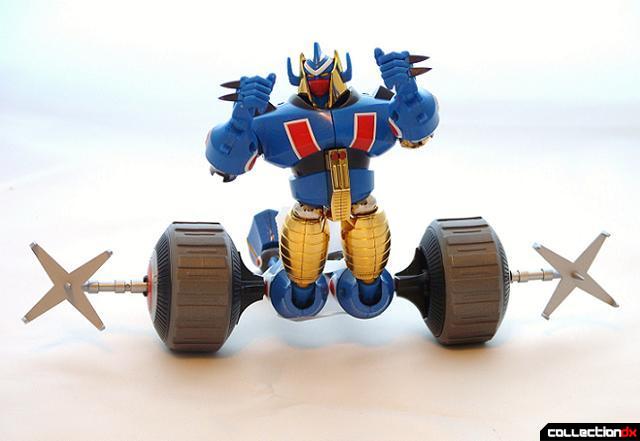 But wait, there's more! You can take the wings from the hovercraft/trike and attach them to a piece that fits between Gakeen's knee and leg. Thus, making an already bizarre and oddly proportioned Super Robot look that much more ridiculous! Don't you just love some of the crazy 70's robot designs? 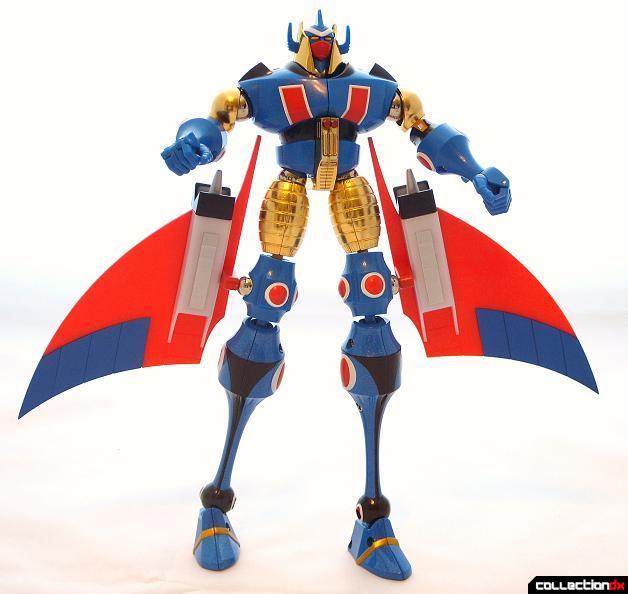 Now onto the two other mecha in this set, Mighty (Magnetman Minus), and Puraiza (Magnetman Plus). Obviously, Mighty is on the right and Puraiza is on the left. You can see the plus and minus signs that adorn their chests. Both these figures are a real disappointment. They stand about 3" tall and have metal at the magnetic points of connection. Unfortunately, the leg magnets are so weak, especially at the knees, making it next to impossible to do any really decent poses. These two figures are definitely going back in the box after review. The figures come with two different weapons, 2 throwing stars as shown in the picture below and 2 drill like guns than are shown in the picture with all three robots below. You also can attach the wing-like blades to the figures back as shown below. These will be shown again further down. 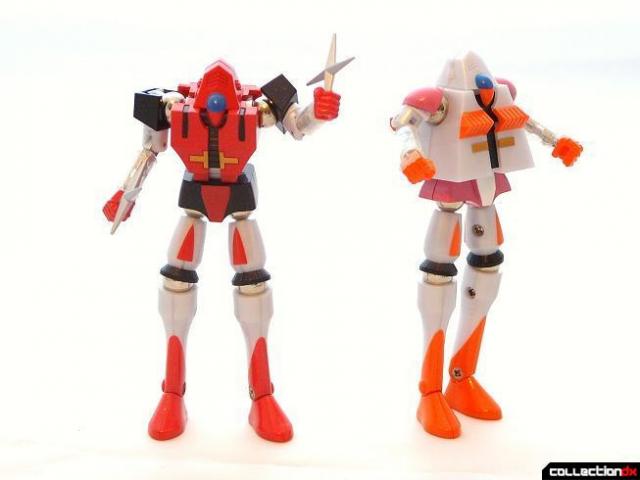 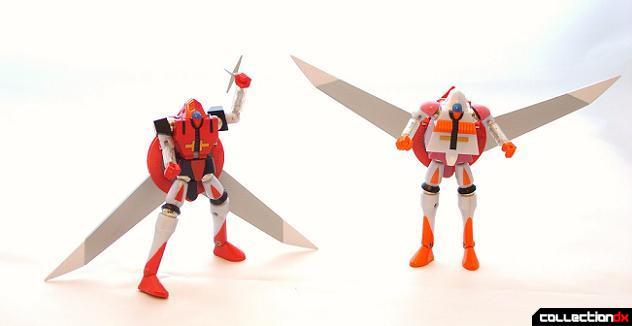 So here they are all together, not too exciting huh? Well, don't worry, these little guys actually have a use in Gakeen's arsenal of weaponry. 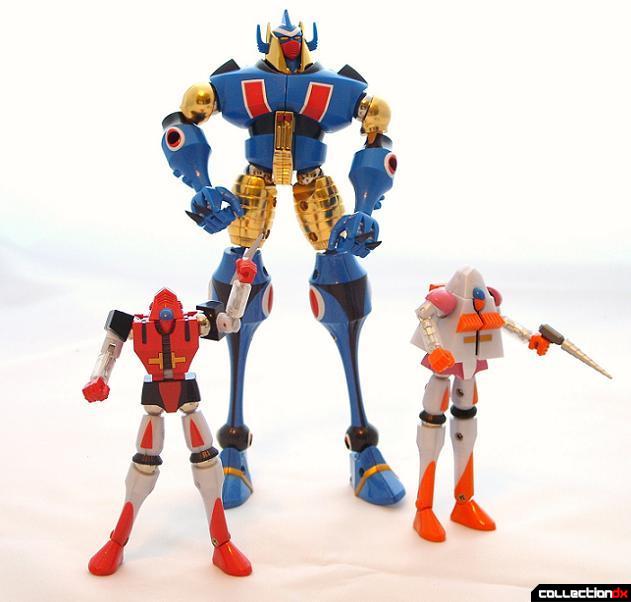 First, they transform and can be held in each arm, supplying Gakeen with some extra speed in flight. The transformation is simple, remove the lower legs, fold arms up, remove hands, and attach new nosecone piece to the place hands were. Oh, and fold out the handles and attach to Gakeen. 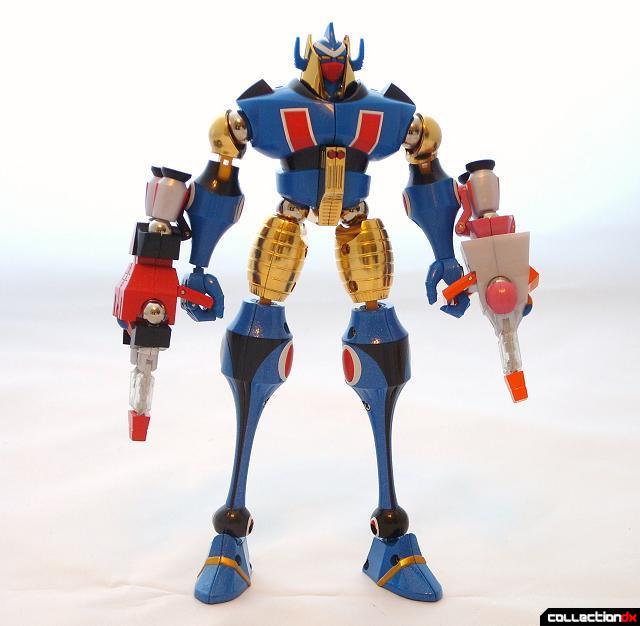 In this mode, they can do a magnetic beam weapon that goes between the two robots. Gakeen is supplied with two stands to allow this. His joints would never hold the weight. 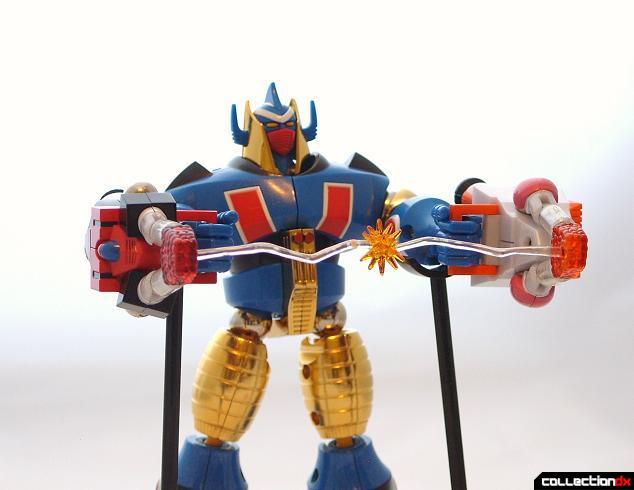 Weighing Gakeen down even further, you can attach those wing-like blades from up above and use them as... you guessed it... another cutting weapon. 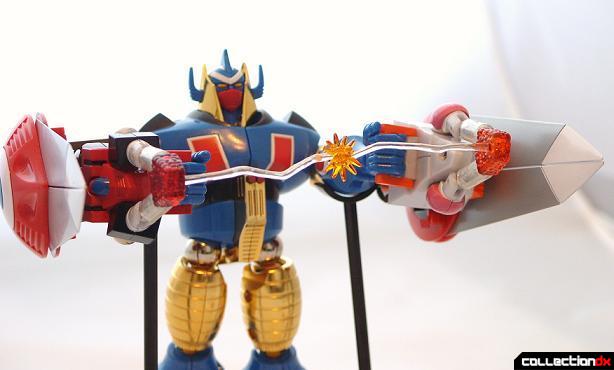 This cutting weapon can be opened like a pair of scissors. Is this the original Edward Scissorhands? 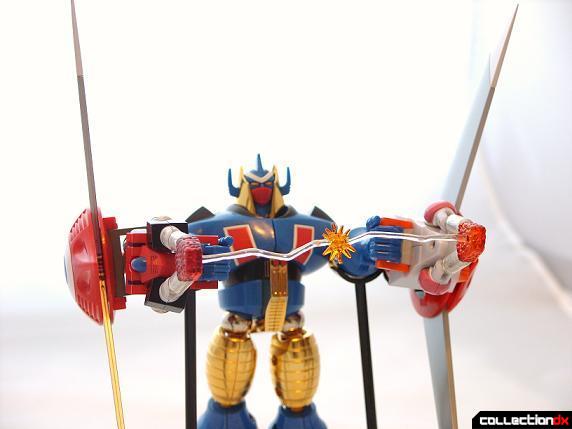 As you can tell from some of the sarcasm used throughout my review, I am not impressed. Even though Gakeen is loaded with gimmicks and extras. I can't help but feel that it could have been done better. If I had paid full price for this toy I would have been downright pissed off, to say the least. I am so glad I waited until it became cheap. I'd say the $100+ dollars I paid was right in the range where this toy belongs. My condolences to those who paid full price ($250 +). Do yourself a favor, either avoid Gakeen, or get it cheap!

couldn't agree more with your statement but since its a mecha from early 70's, i think cm did a great job on this one.. paint apps and accessories gave justice to the overall appeal of this mecha...

I read this review while sitting here 7:16am drinking 64 ounces of laxative and I have to agree with everything you said about Gakeen. Waiting for price drop was definitely a good idea. I thought the proportions for this robot were horrid until I watched Magnos on Netflix and started digging him, so I found him cheap on ebay. Seems most of the budget went towards weapons cause there is tons. Overall I very much enjoyed the figure despite its flaws. It grew on me. The two smaller figures redeemed themselves by at least standing on their own in my display case.

Only actual defect I found was that the plastic surrounding the hinge pin on the smaller red robot on the handle on his back was cracked. Probably due to a knurled pin? Does yours have that same problem Dan? Anyways, laxative is taking effect. Gotta go

The two biggest issues--the light weight and the weak joints--are a problem with nearly all toys with magnetic joints. Compare this with the SoC Jeeg, for example.
http://www.collectiondx.com/review/2008/kotetsushin_jeeg

I actually had the impression that you were pleased with the toy up until I read, "as you can tell from some of the sarcasm."

I didn't really pick up on the sarcasm either. Stuff's hard to do on the internet. Nothing really struck me as off until the picture of the legs taped together.

I can't speak to the quality of the toy, but I absolutely love this thing's funky look. It's got something really interesting and artistic going on. Too bad the joints aren't stronger.

I will never tell anyone what to like or what not to. I catch enough flack for loving japanese robots as it is that I wouldn't want to do it to anyone else.

With that in mind: That might just be the ugliest excuse for a giant robot I have encountered in my life-long love affair with the genre. I don't care WHAT it's on sale for, even if it had the first perfectly working set of magnetic joint in Gokin history, that thing is staying away from my humble little shelves.

Someone out there must love that thing, or at least think it's really interesting... the best news I can offer is that you can offically assume that I will not be racing you to snatch the last one up on Ebay.

Personally, I liked the robot as it is anime accurate and chock full of weapons and accessories.

The only defect I found in Gakeen was that the upper part of the left leg was a little scratched.

My other grumble is the lack of stability of Mighty and Puraiza.

I bought the Limited Edition (Anime Color) version from HobbyLink Japan and would like to have this metallic version, too.

One last comment, the sword seen in the reveiw is not Gakeen's. It belonged to General Brain, the enemy commander who fights to the last with Gakeen in episode 35.

Thanks for the review, shogundan.